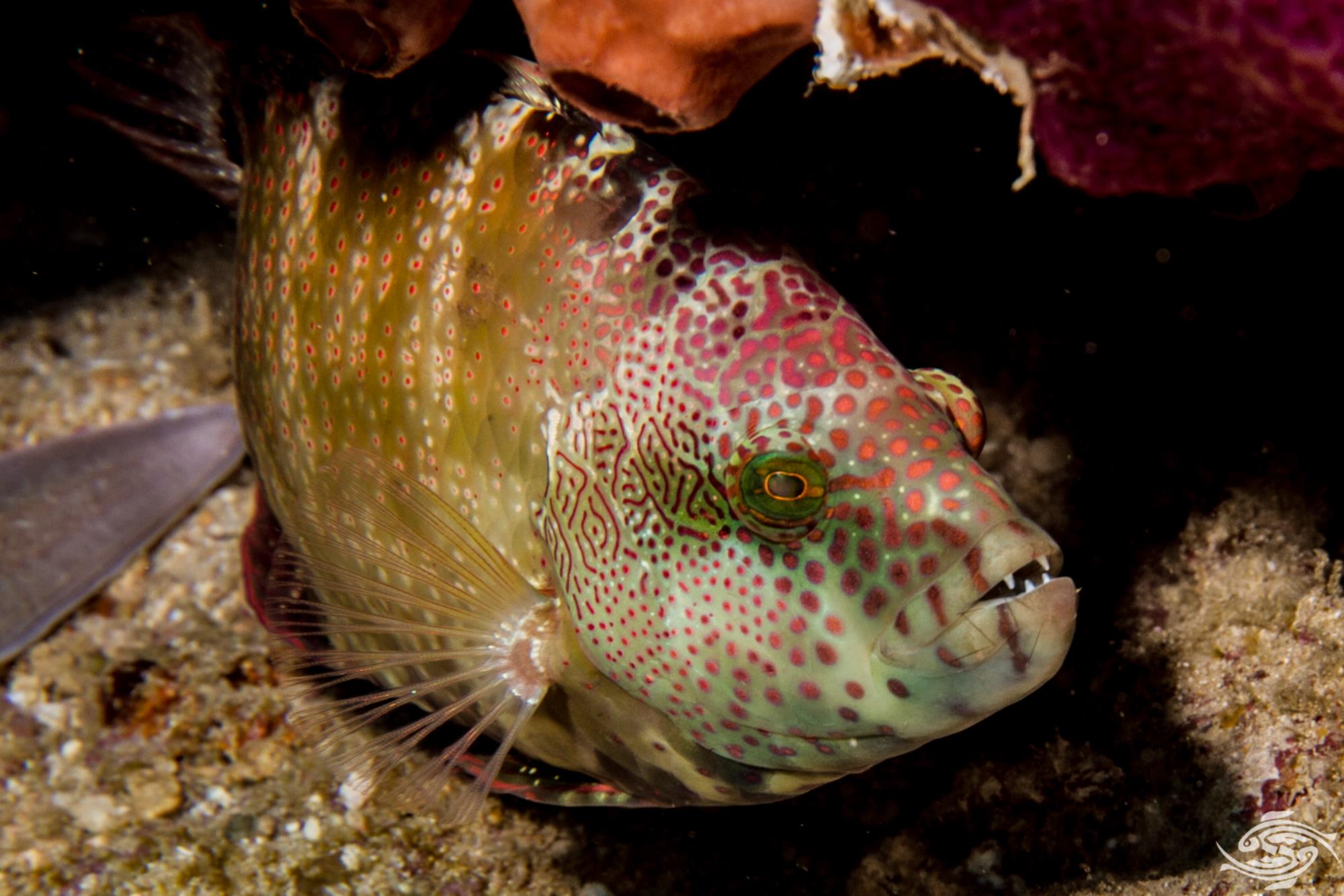 The Floral Wrasse, Cheilinus chlorourus is also known as Floral Maori Wrasse. They are one of the larger wrasses and are usually very shy and because of this are very difficult to approach and photograph.

In Tanzanian waters there is considerable variation in coloration between the juveniles and the adults.  Both have rows of white dots down the body with larger dots and reticulated patterns on the face. The eye on both juveniles and adults is bulbous and has an orange ring around it. 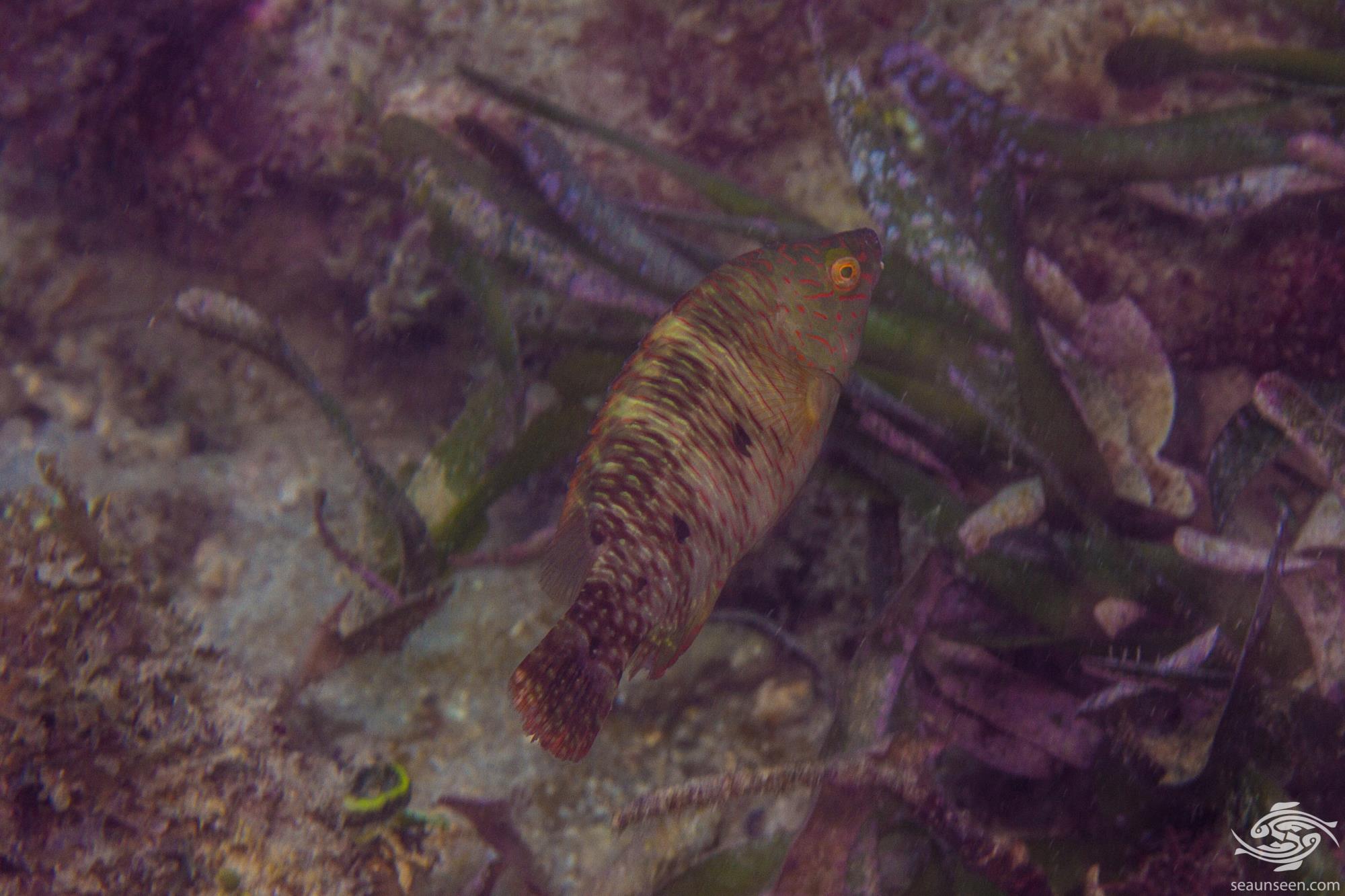 The juveniles have a red brown background color with a pinkish colored face and white blotches in the caudal area which on some specimens continue through to adulthood. In full grown adults large numbers of the white dots on the body contain a red dot in the middle. The body background color changes to a light green and the caudal fin is dark colored, sometimes with a white blotch. There are often dark blotches just below the dorsal fin on the adults.

They grow up to 45 cm and have a fairly formidable set of teeth as can be seen in the image above. 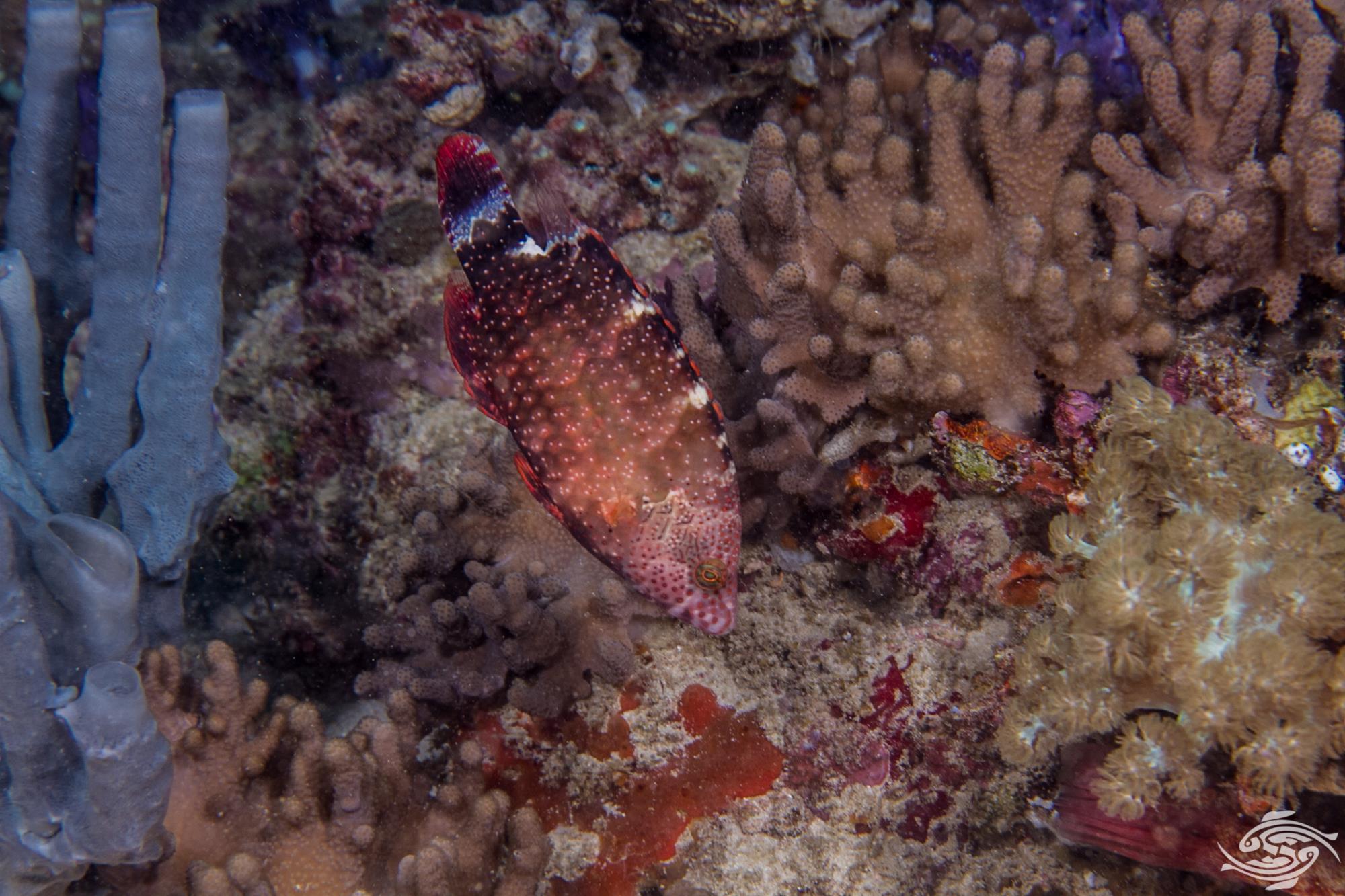 The Floral Wrasse is not that commonly seen and usually heads off in the opposite direction when they see a diver. A fair number of juveniles are seen flitting from hiding spot to hiding spot. This makes it difficult to gauge the numbers. The juvenile specimens are usually seen in grassy beds rather than on the reef.  Their coloration provides excellent camouflage in this environment.

The juveniles and adults have to date always been seen solitary. On one occasion a large full grown specimen swam up to me and swam around in front to the camera for some 5 minutes inspecting me. This is so far an anomaly and usually one only glimpses them from a distance heading into a hole. Usually they seem to never be far from cover and will go into hiding instantly. 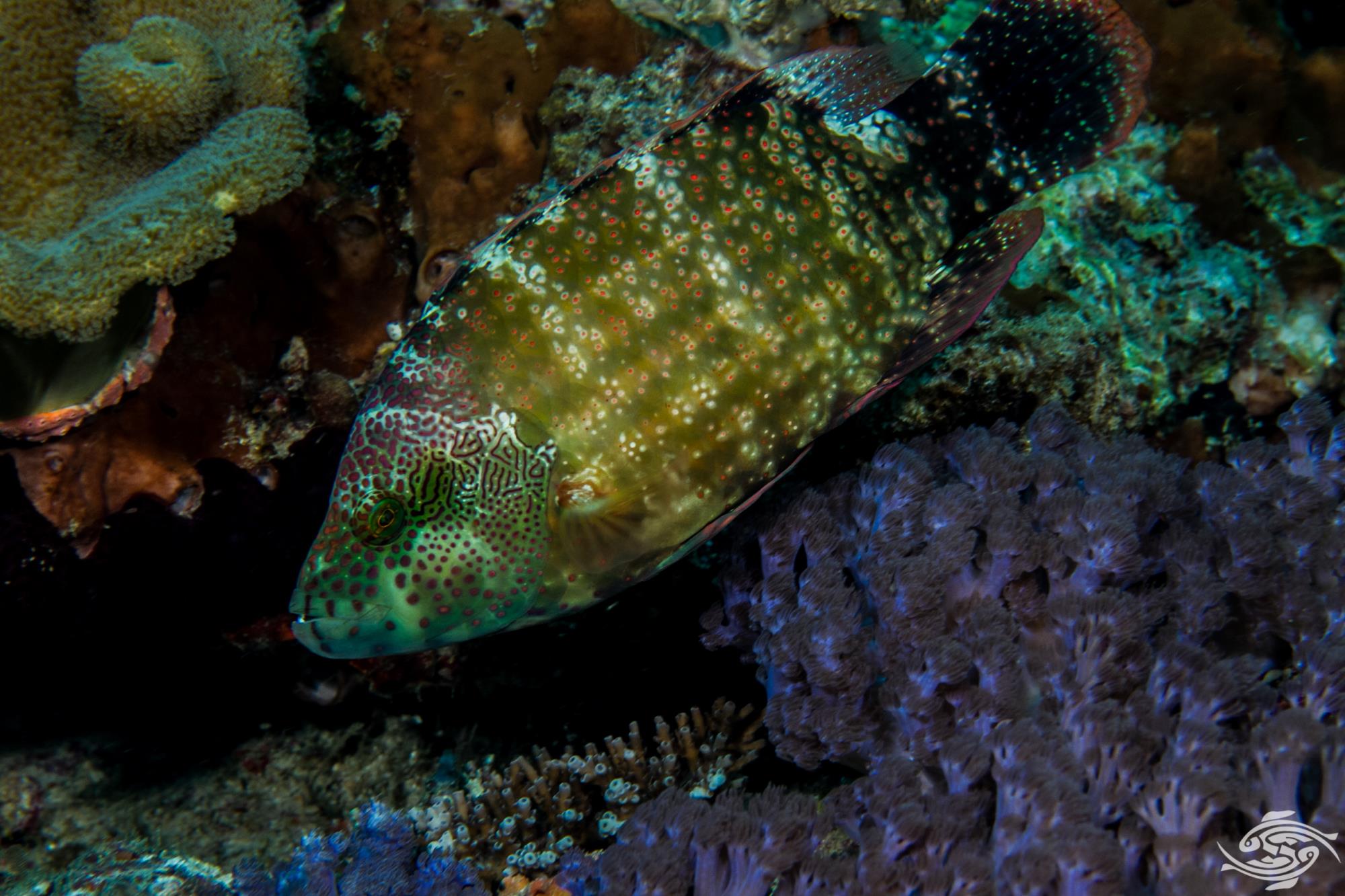 The Floral Wrasse, is found across the western Indian Ocean down to southern Kwa-Zulu Natal and across to New Caledonia in the west Pacific. They are mainly seen on the rubble and sandy areas between corals and tend to swim low close to the bottom. They seem more common around the 15 to 20 meter range in Tanzania but have been seen down to 25 meters. 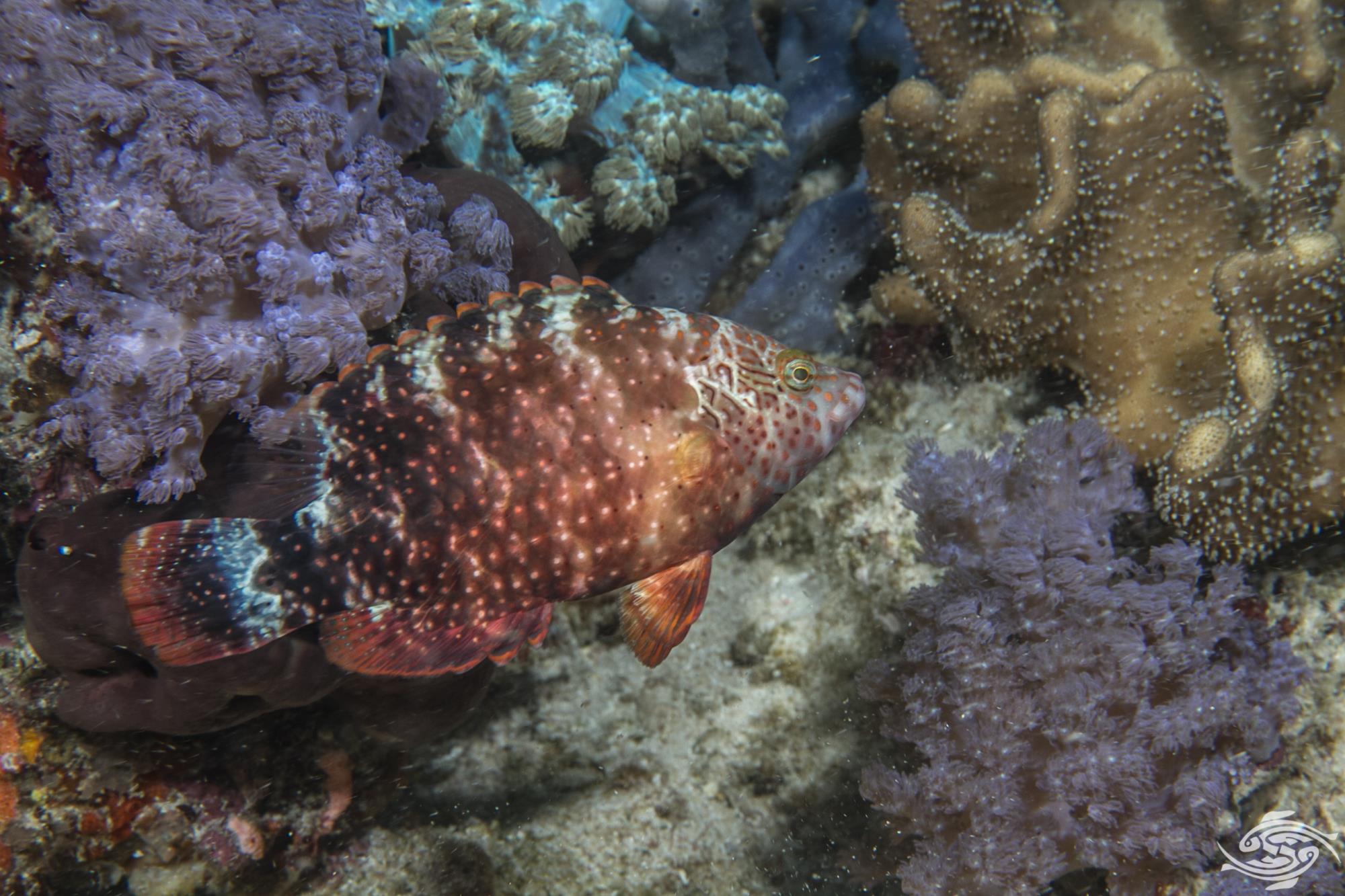 The Floral Wrasse feed on small crustaceans and mollusks and usually feed on their own. 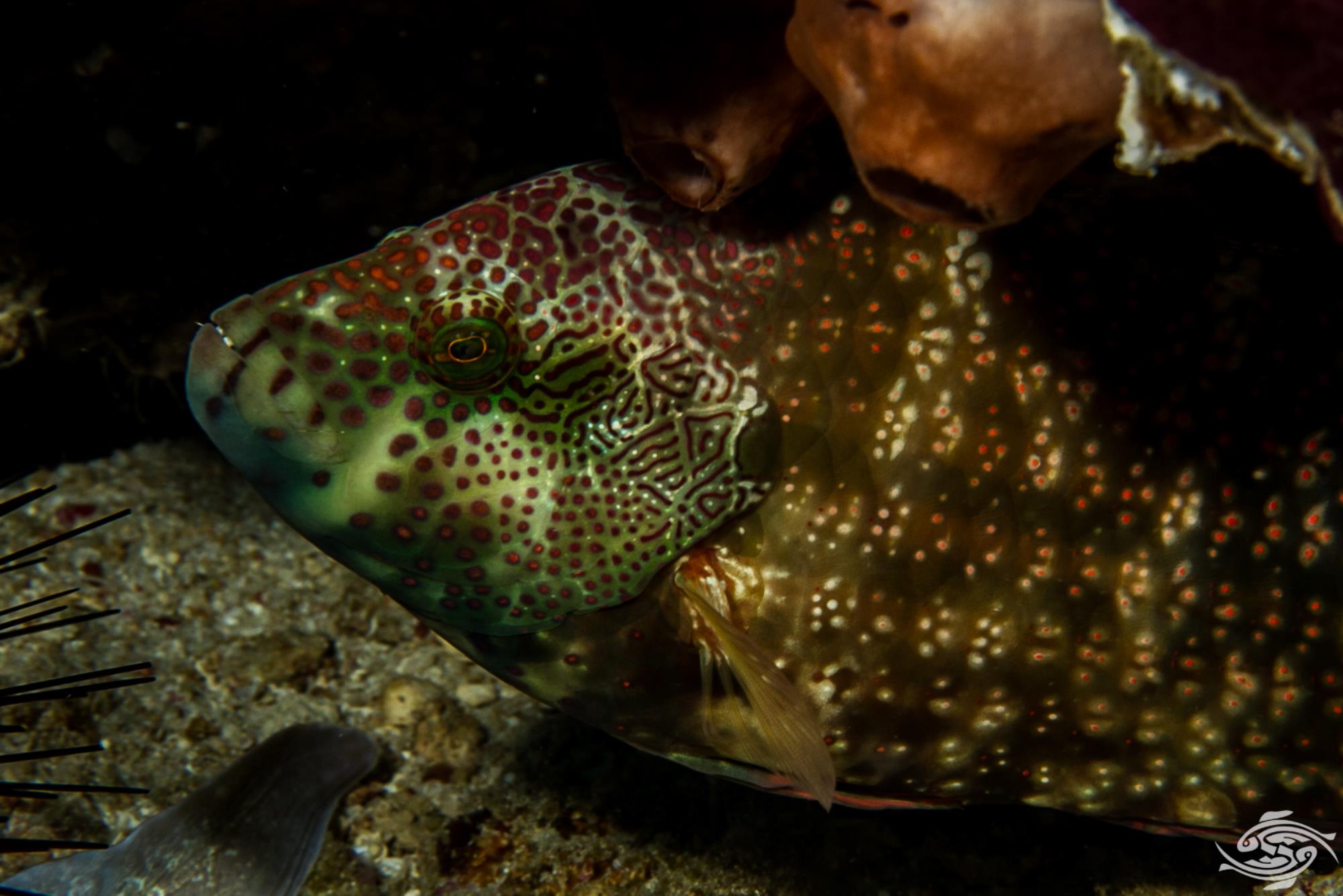 The Floral Wrasse is Oviparous, with distinct pairing during breeding. 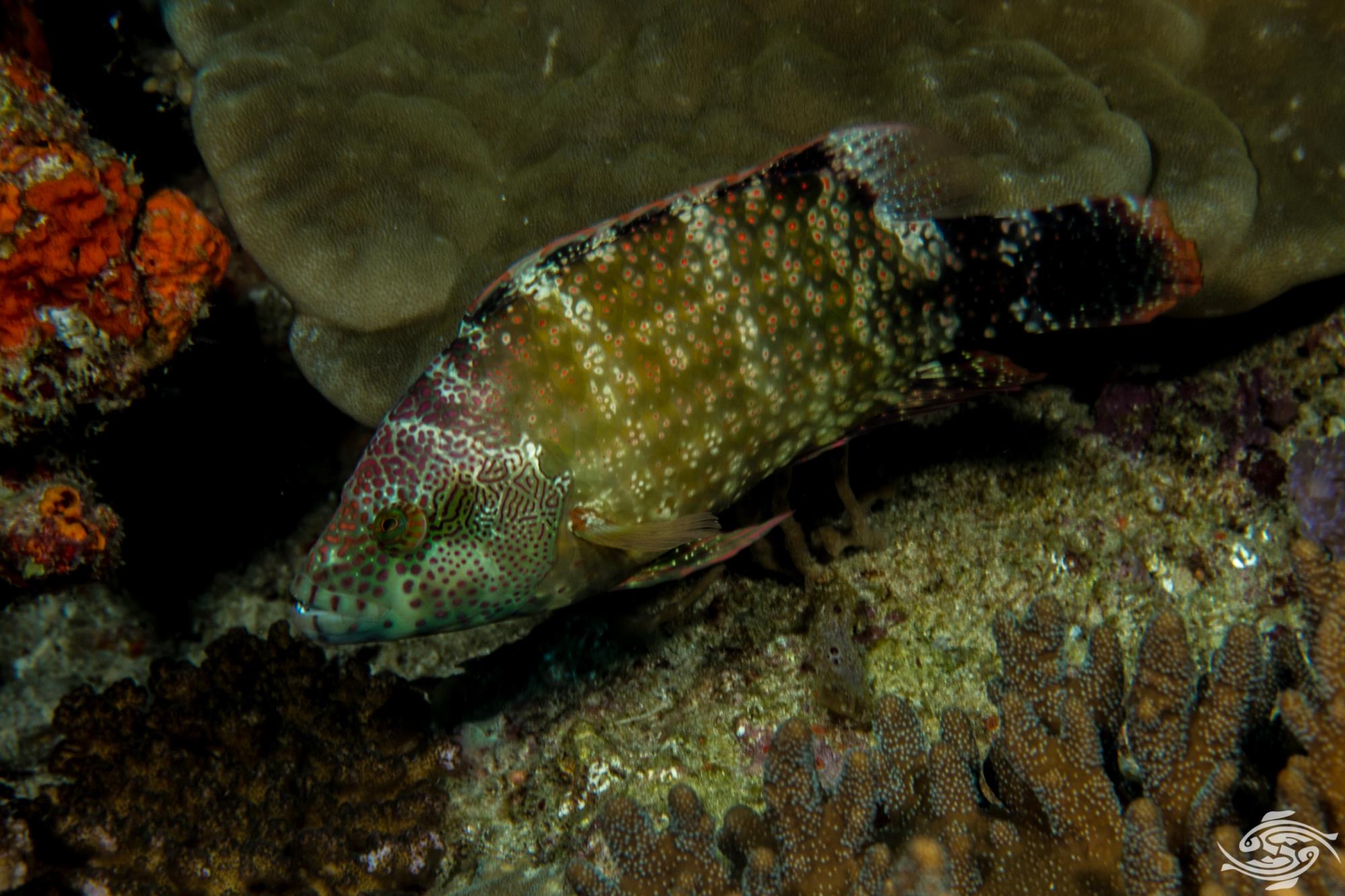 Floral Wrasse are kept in aquariums but because of their size are not popular in the aquarium trade. A large tank with suitable tank mates would be necessary and it may be difficult to wean them onto prepared foods. 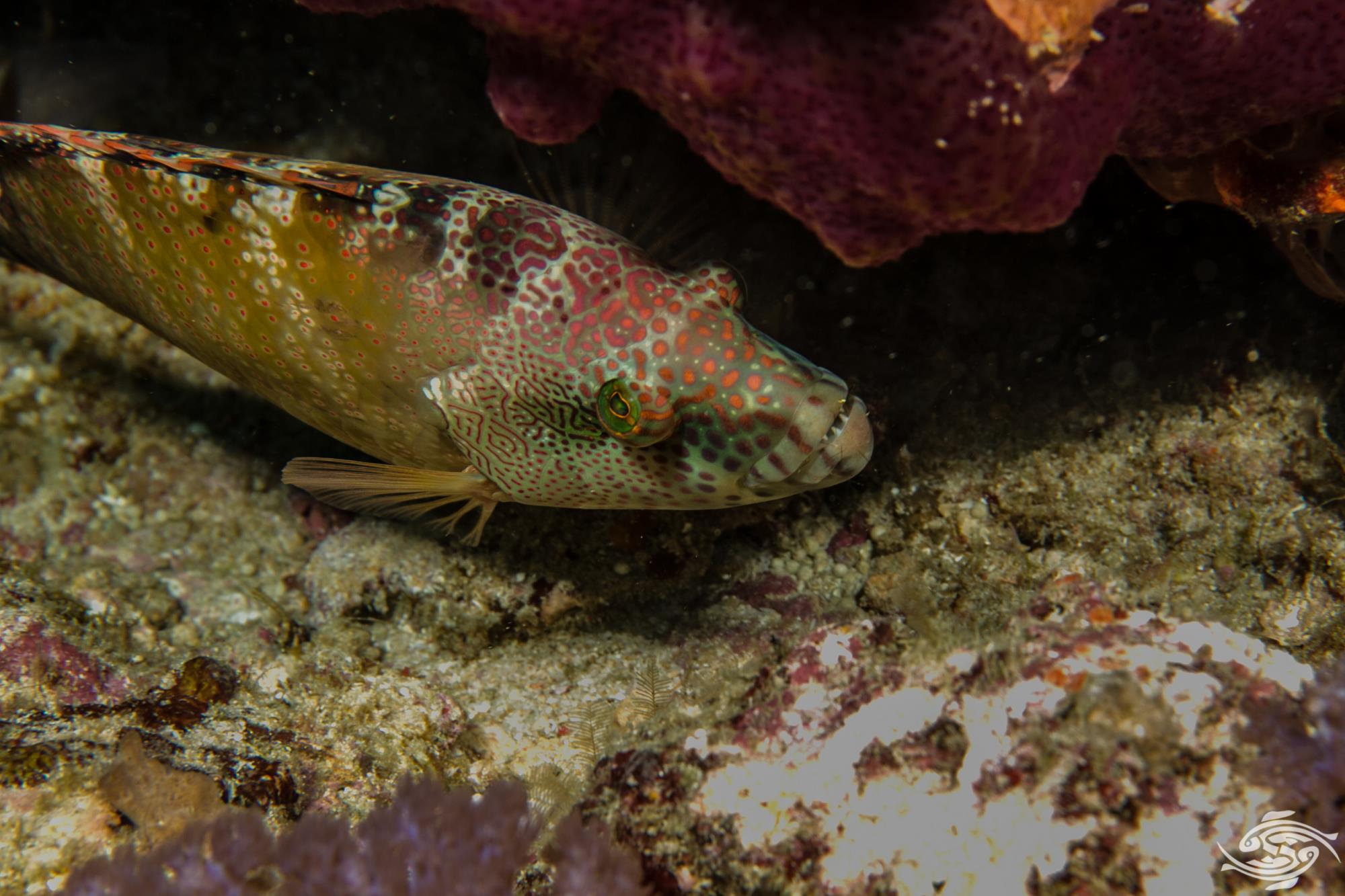 The Floral wrasse are caught by subsistence fishermen as can be seen in the image below. 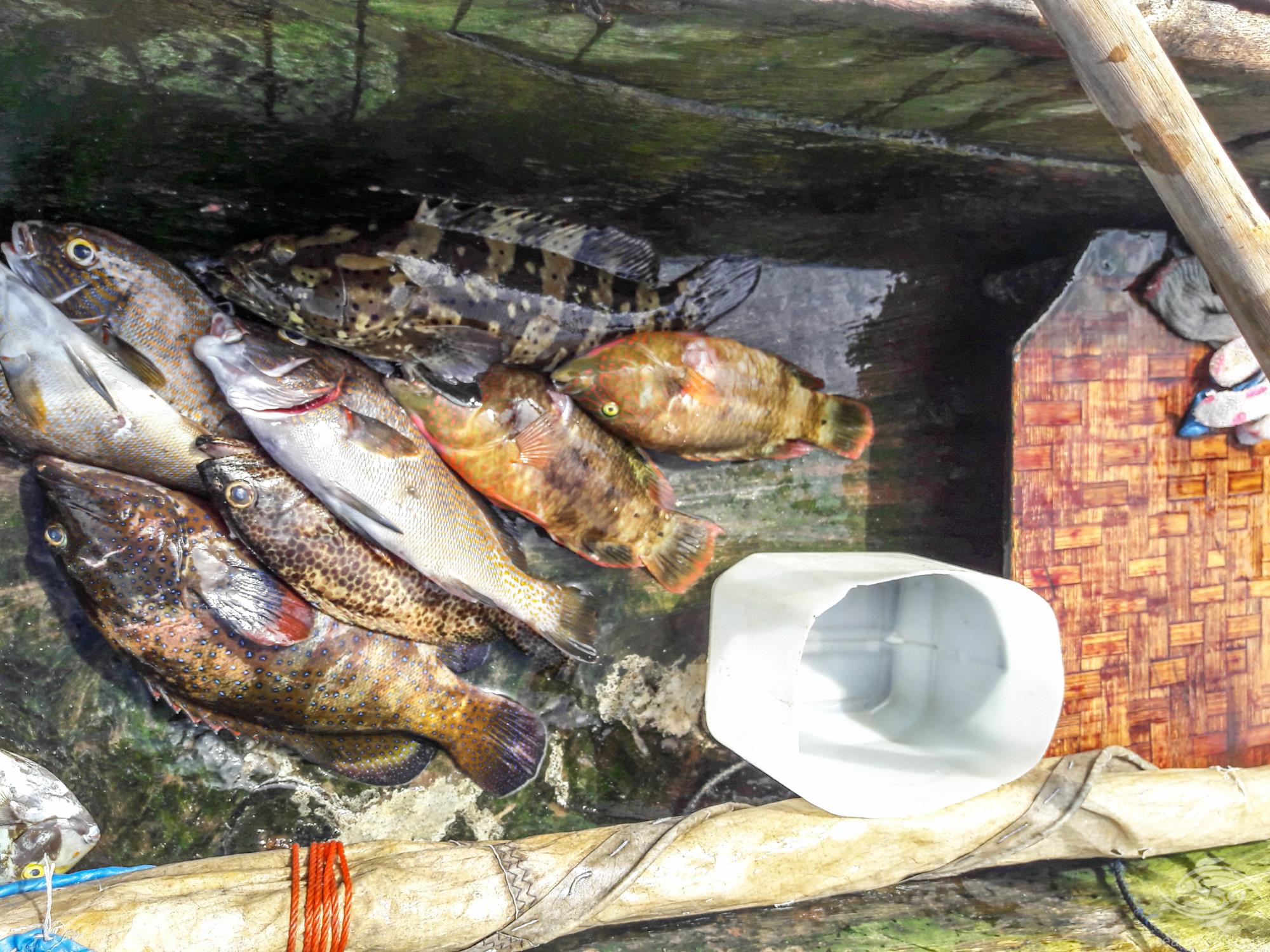 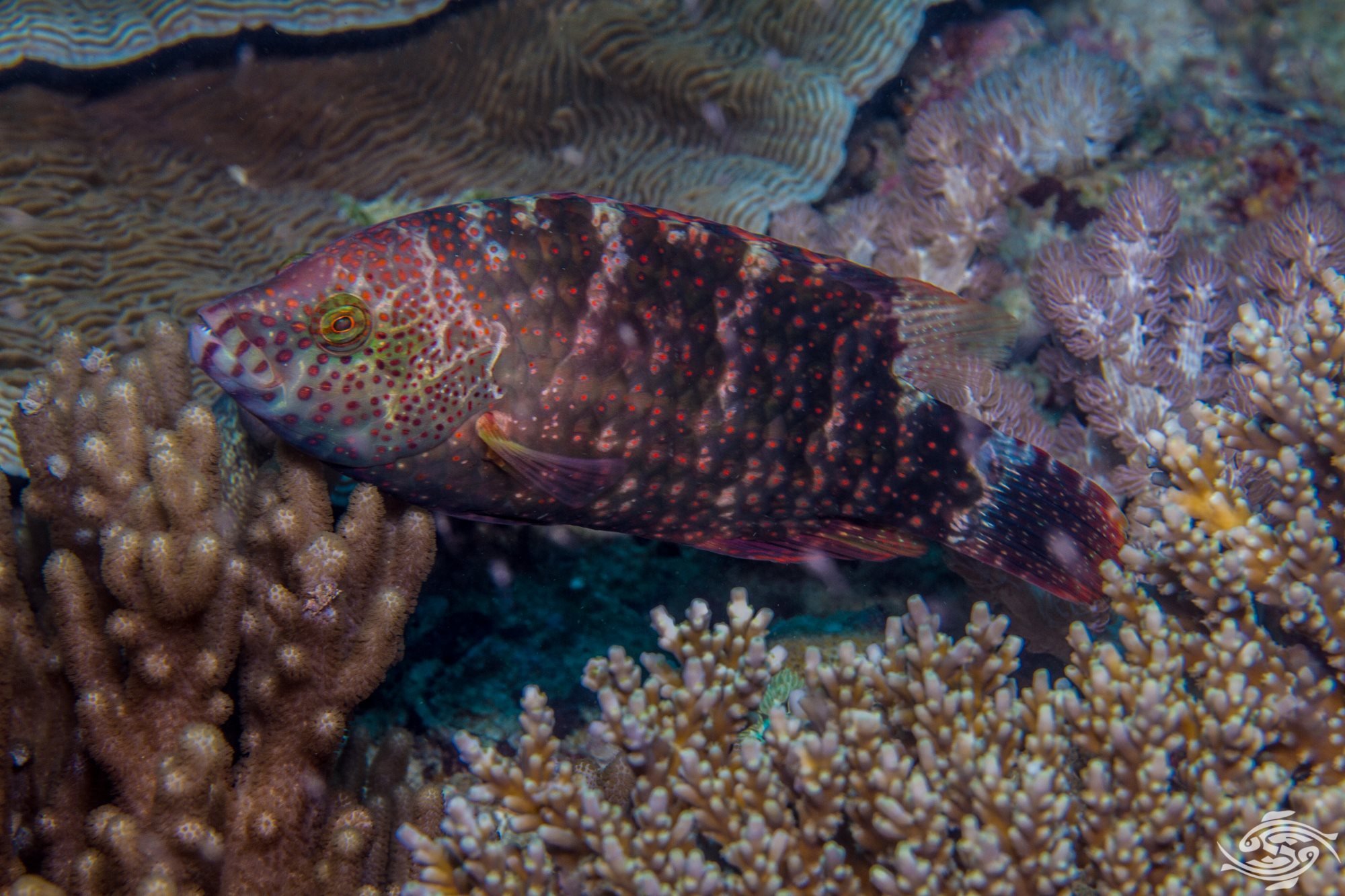 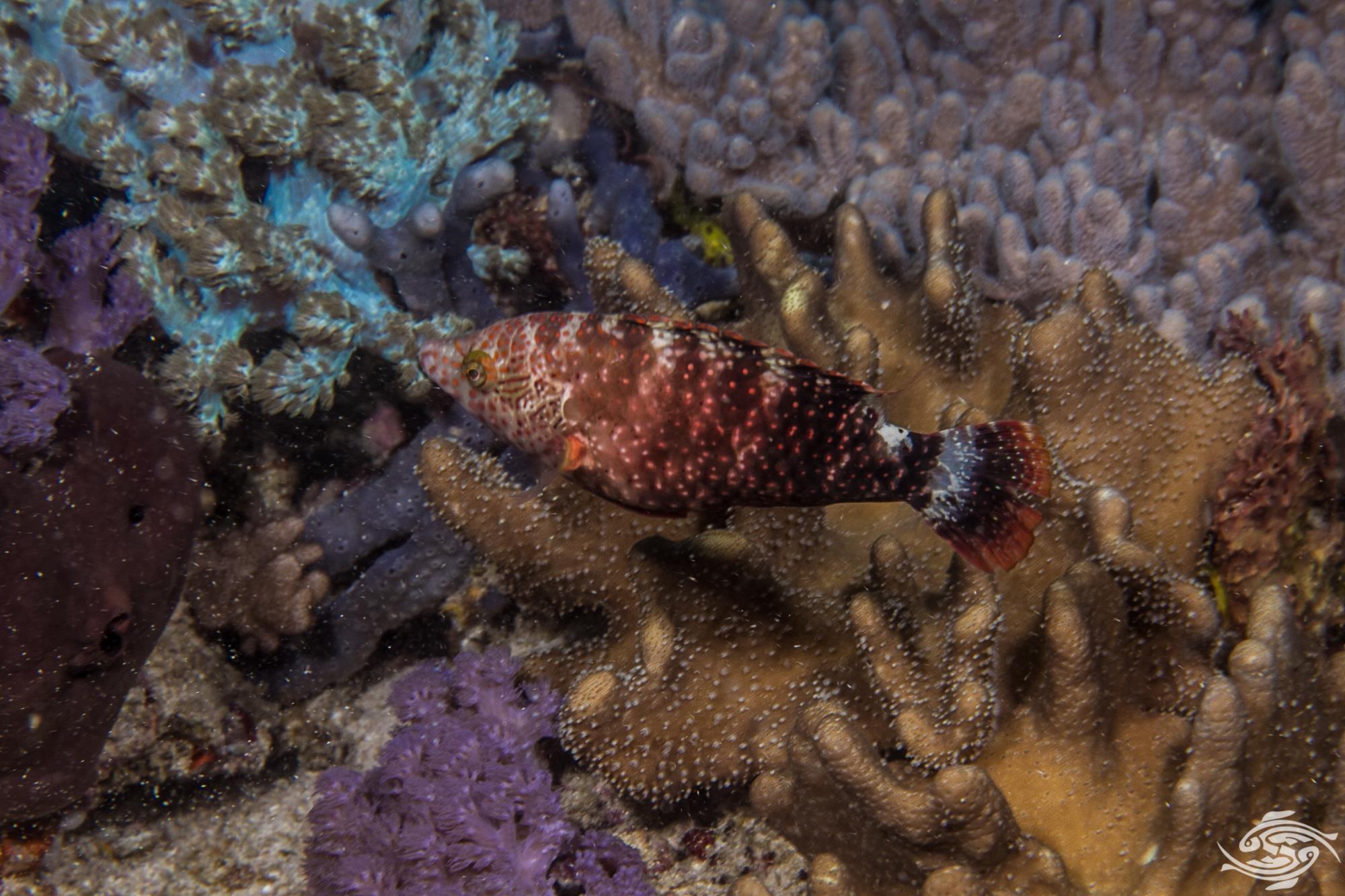