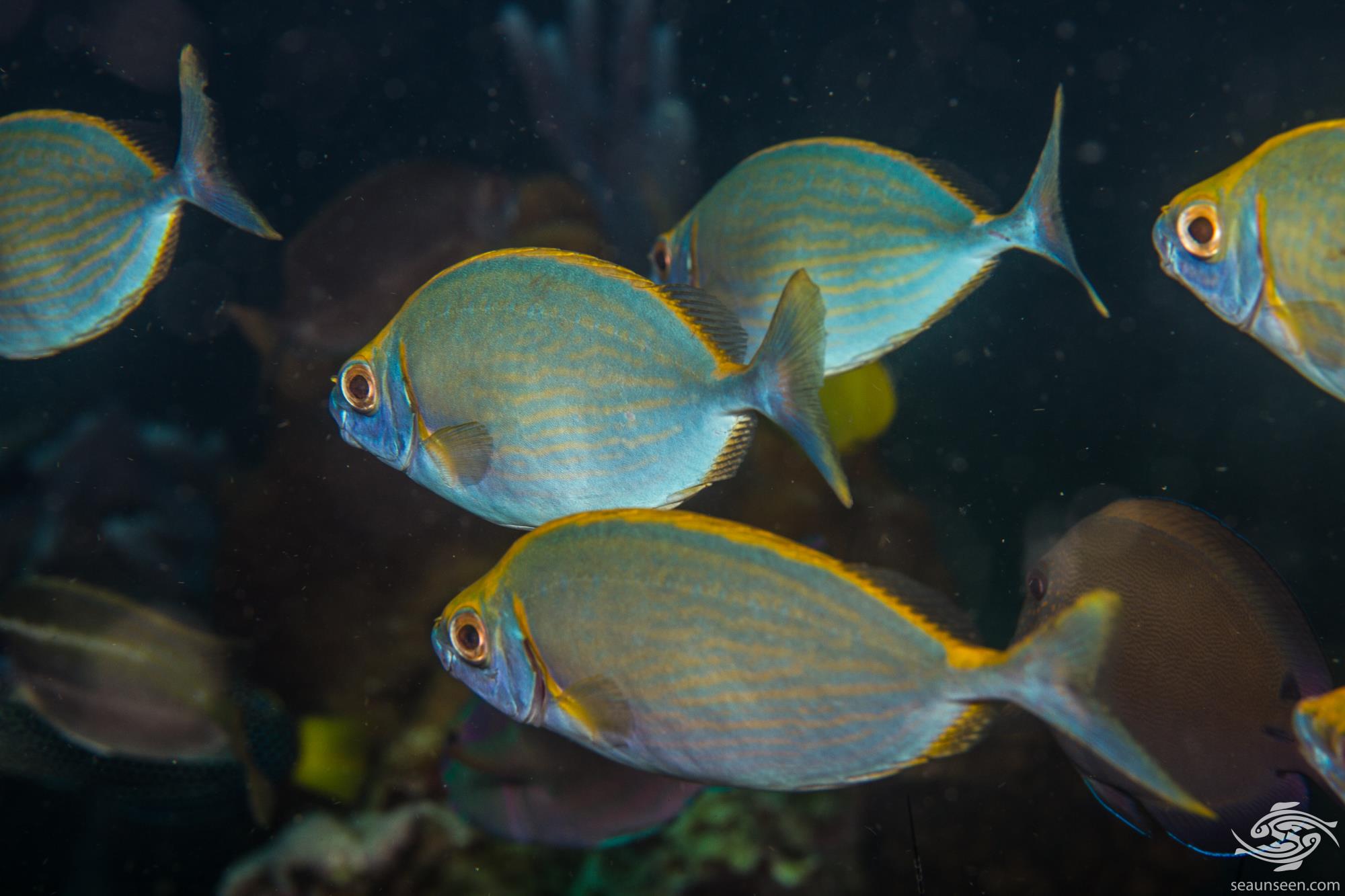 The Forktail Rabbitfish (Siganus argenteus) is also known as the Streamlined Spinefoot and Schooling Rabbit-fish. They were originally described by Quoy & Gaimard in 1825.  As their one common name alludes to, they are found in schools whereas the other rabbitfish tend to be singular and in pairs. Unusually they always seem to have their mouth open all the time.

Although they were once probably common they are still extremely rare in Tanzanian waters, having been susceptible to dynamite fishing which thankfully was stopped in 2017 as well as ring net fishing, now also banned. The numbers are slowly coming back up and now in 2020 on rare occasions we see  individual juveniles and small groups of two or three fish. 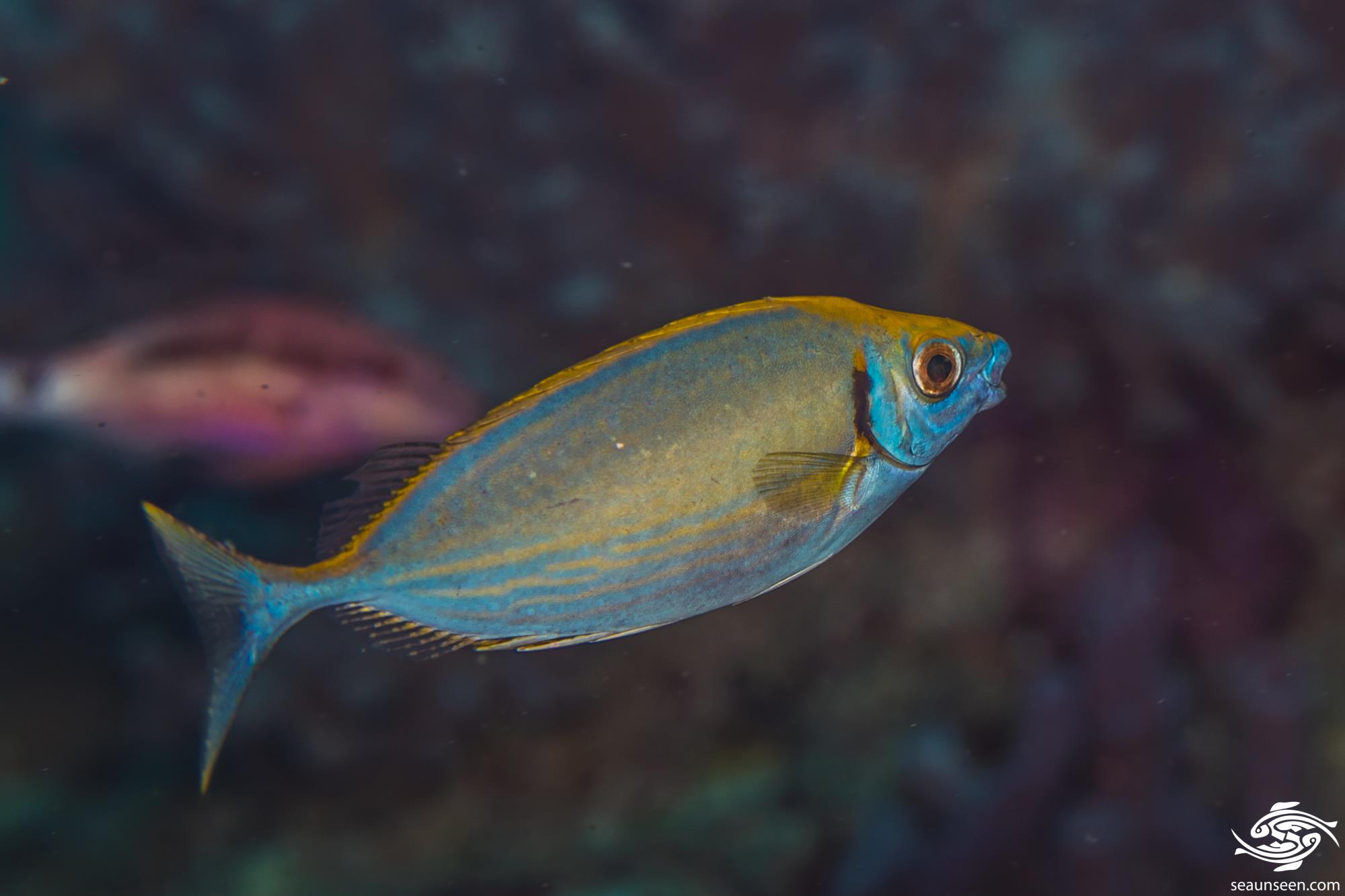 Rabbitfish obtain their name from a superficial resemblance to Rabbits, having large eyes and a small mouth. Personally the resemblance is hard to see but the name is there. The Forktail Rabbitfish has a roughly oval body with a pointed mouth but is more streamlined than most of the other Rabbitfish. Rabbitfish are able to change their colors quite rapidly and it is assumed this species is no different from the others.

During the day the body is a light blue colour with indistinct yellow lines running horizontally across the body.  There is a yellow line down the rear side of the gill and another from the head across the dorsal area onto the upper caudal peduncle. The caudal fin is forked and the edges of the fins are tipped in yellow. They grow up to 40 cm in length but at present we are only seeing specimens in the 15 to 20 cm range.

The spines contain poison glands that can cause great pain but are unlikely to be fatal to any healthy adult. The treatment for the poison if envenomated is hot water as hot as one can take, it for 60 to 90 minutes. The poison is made up of protein chains which break up under heat. 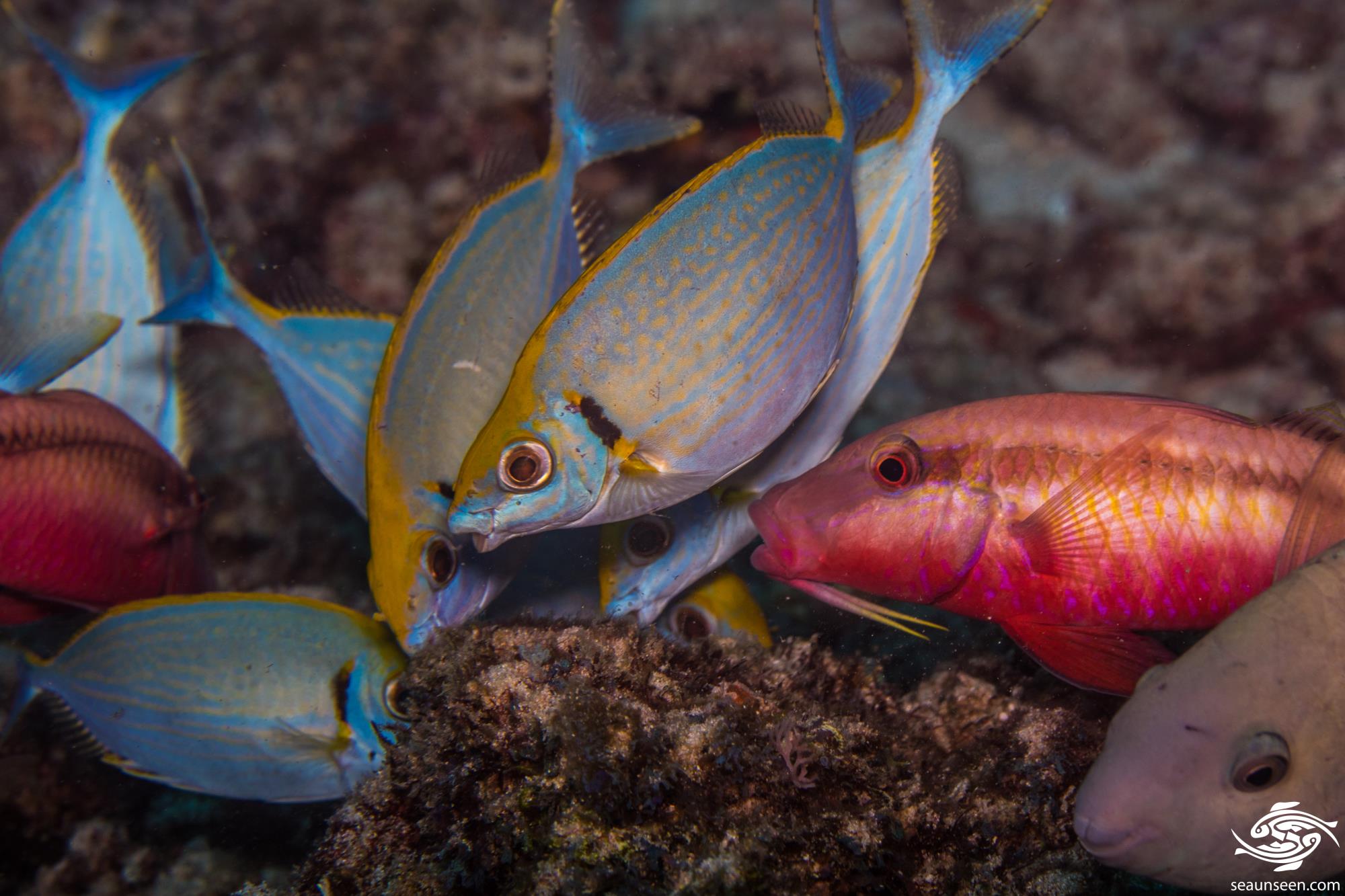 The Forktail Rabbitfish  is normally seen swimming fairly low over the reef or rubble areas in-between the reef.  As mentioned earlier these fish were pretty much absent from the area surrounding Dar es Salaam, almost as a certainty as a result of the dynamite fishing and ring netting which specifically targeted them.

Very occasionally we are starting to see juvenile fish swimming alone but more commonly with shoals of Bigeye Snapper. For some reason they seem to prefer these shoals over those of the other snapper.  These are seen on unprotected offshore reefs on the reef tops usually around 15 meters. Because of their tail shape they are easy to pick out. All the specimens we have seen have been extremely skittish and are very difficult to approach and photograph. The small juveniles shoal out to sea and once they reach a certain size the shoals migrate closer in to shore. 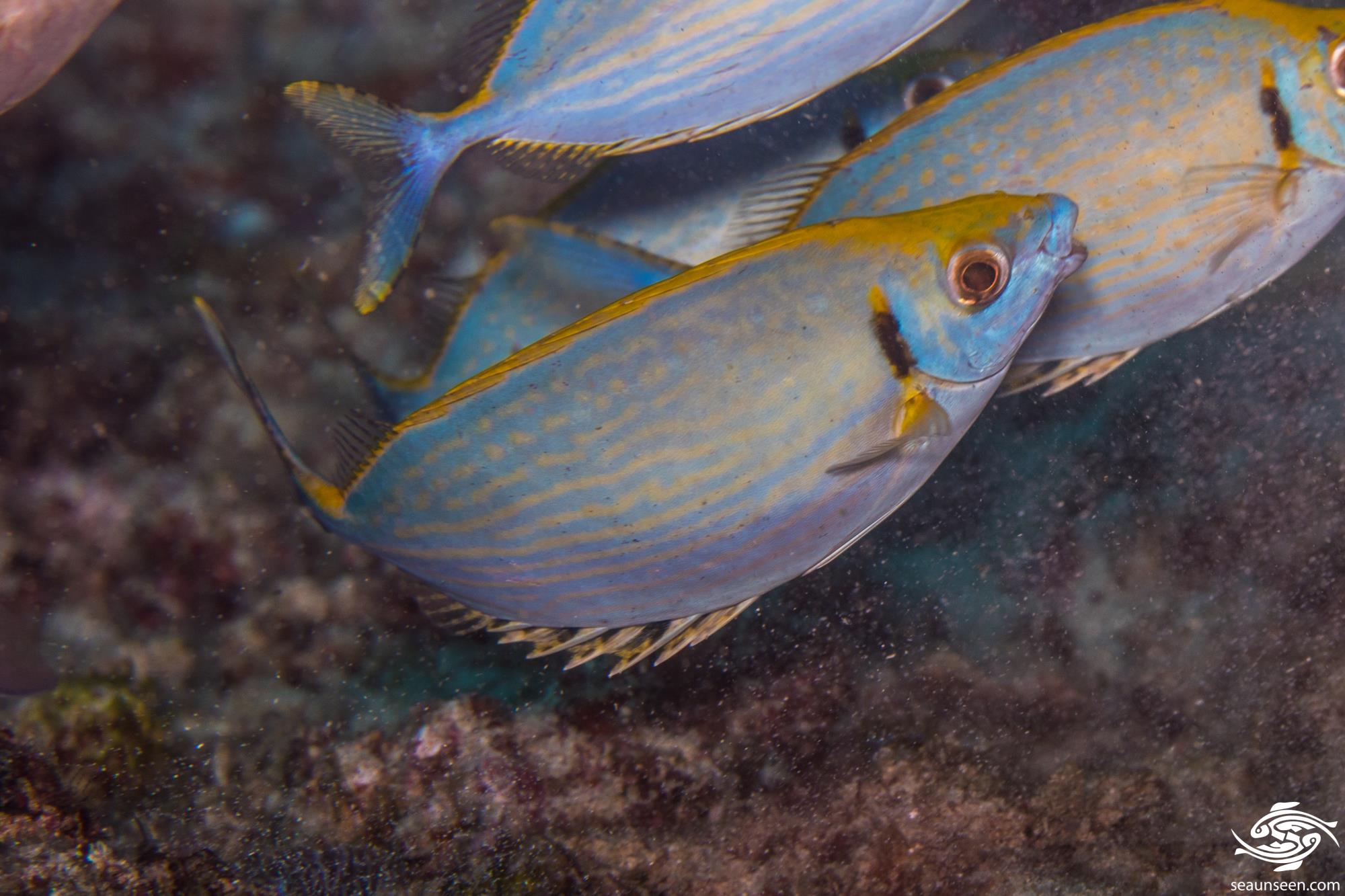 Forktail Rabbitfish are found from East Africa across the Indo Pacific to Pitcairn Island, where they are the only species of Rabbitfish. The small juveniles are found in shoals several kilometers out to sea and once the reach a certain size they migrate inshore , usually being found on reef tops from 10 to 40 meters.  They have migrated up the Suez Canal into the Mediterranean Sea.  This is known as Lessepsian Migration. 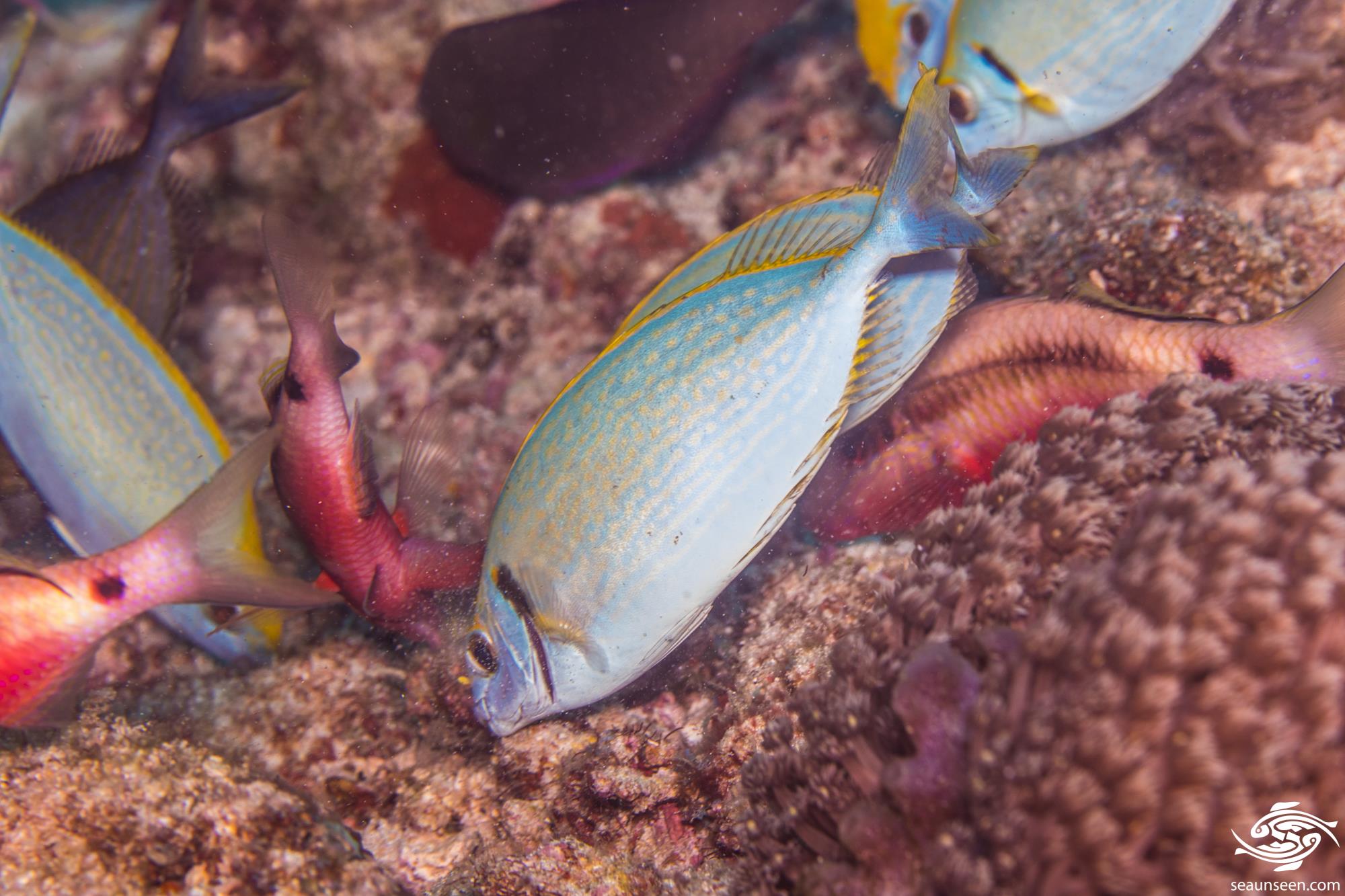 The Forktail Rabbitfish Rabbitfish feed on benthic algae. These benthic algae are collected by local fishermen in Tanzania and Kenya and are placed in fish traps as bait. This can be seen in the image two down. 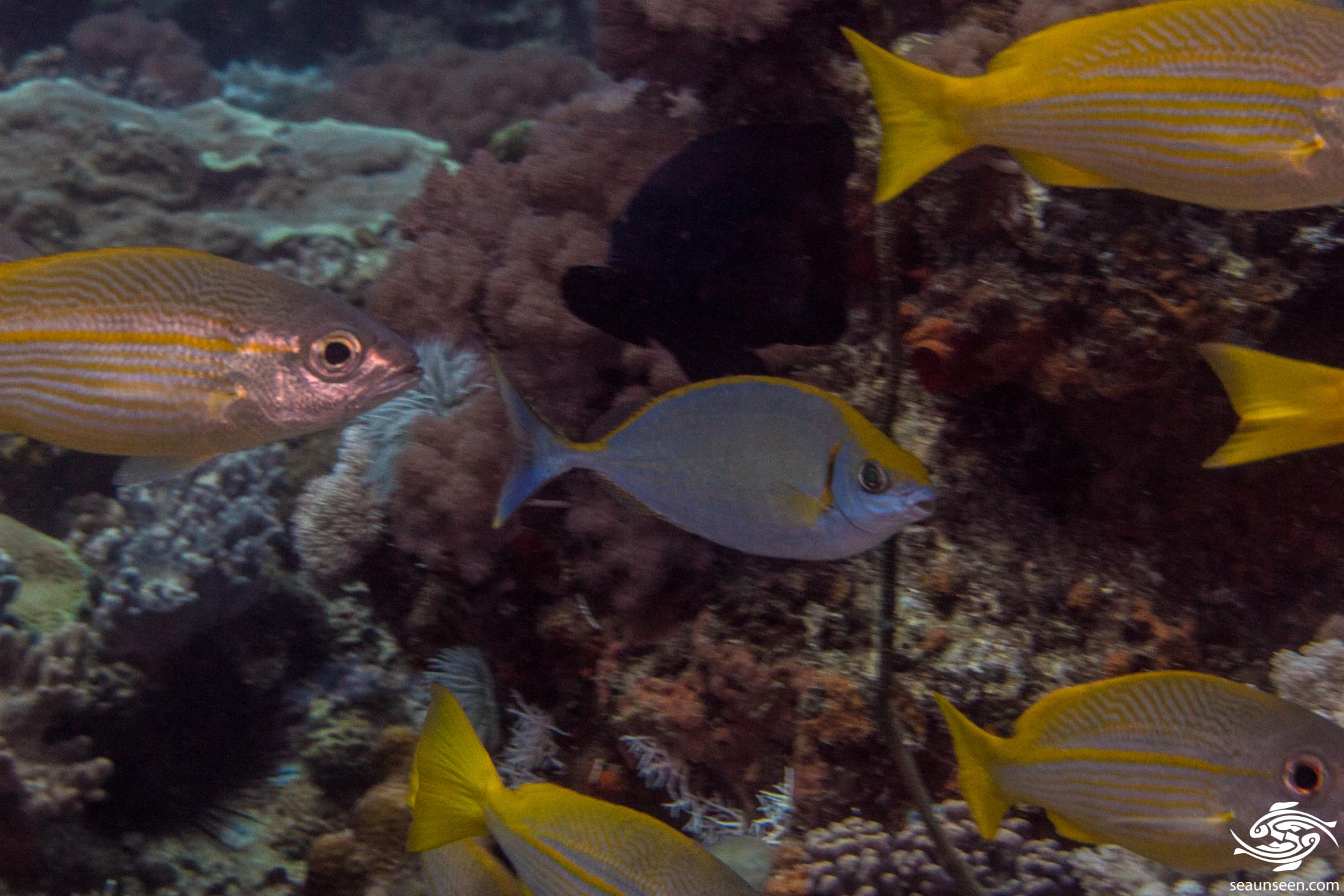 There seems to be little research done on their breeding habits other than that their spawning is tied to the lunar phases.

The Forktail Rabbitfish Rabbitfish is still caught by fishermen  in traditional basket fish traps pictured below as well as in gill nets in Tanzania. This heavy drain has dented the rabbitfish population levels on much of the Tanzanian coast. The more mature fish are a rare sight these days outside of the marine parks. They are also caught by dragging  nets across the bottom which causes great damage to the reef and rubble areas. Research has been conducted on this species as to their suitability for aquaculture.