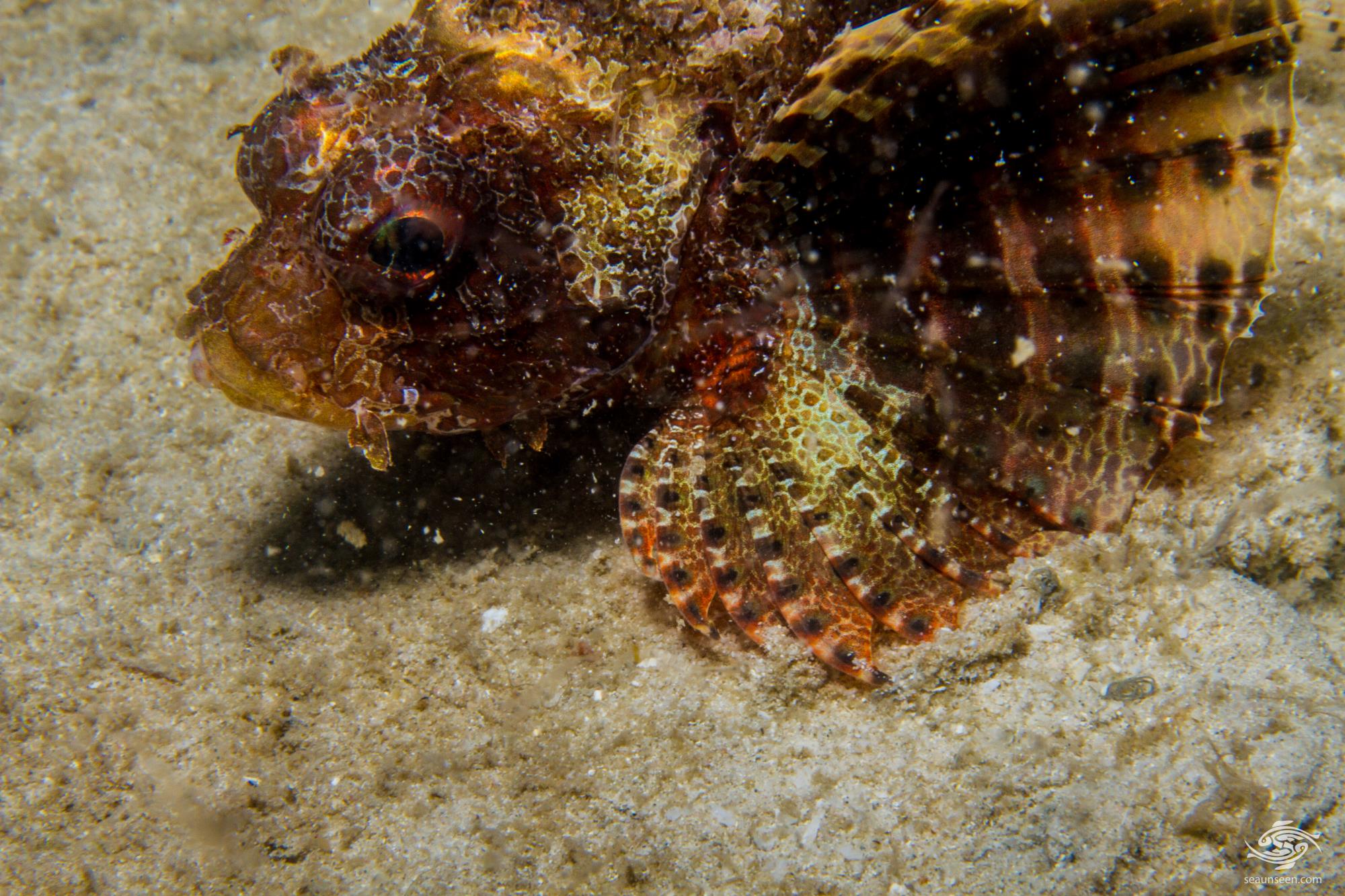 The Fuzzy Dwarf Lionfish (Dendrochirus brachypterus) is also called the Shortfin Lionfish, the shortfin turkeyfish and the Dwarf Lionfish. As the name dwarf implies, they are one of the smaller Lionfish. They are relatively common over protected sandy mixed rubble shallow areas on the Tanzanian coast.

The Fuzzy Dwarf Lionfish in some ways resemble the Zebra Lionfish (Dendrochirus zebra) but both are easy to distinguish from the other lionfish species because of the enlarged pectoral fins. The fins on both the  Fuzzy Dwarf Lionfish and the Zebra Lionfish are full and fan shaped and the fin membranes extend almost all the way to the end of the rays. In most species of lionfish the rays extend out past the fin membranes. The Zebra Lionfish pictured below has a more uniformly colored body with vertical bars on it. This is the easy way to distinguish between the two species. 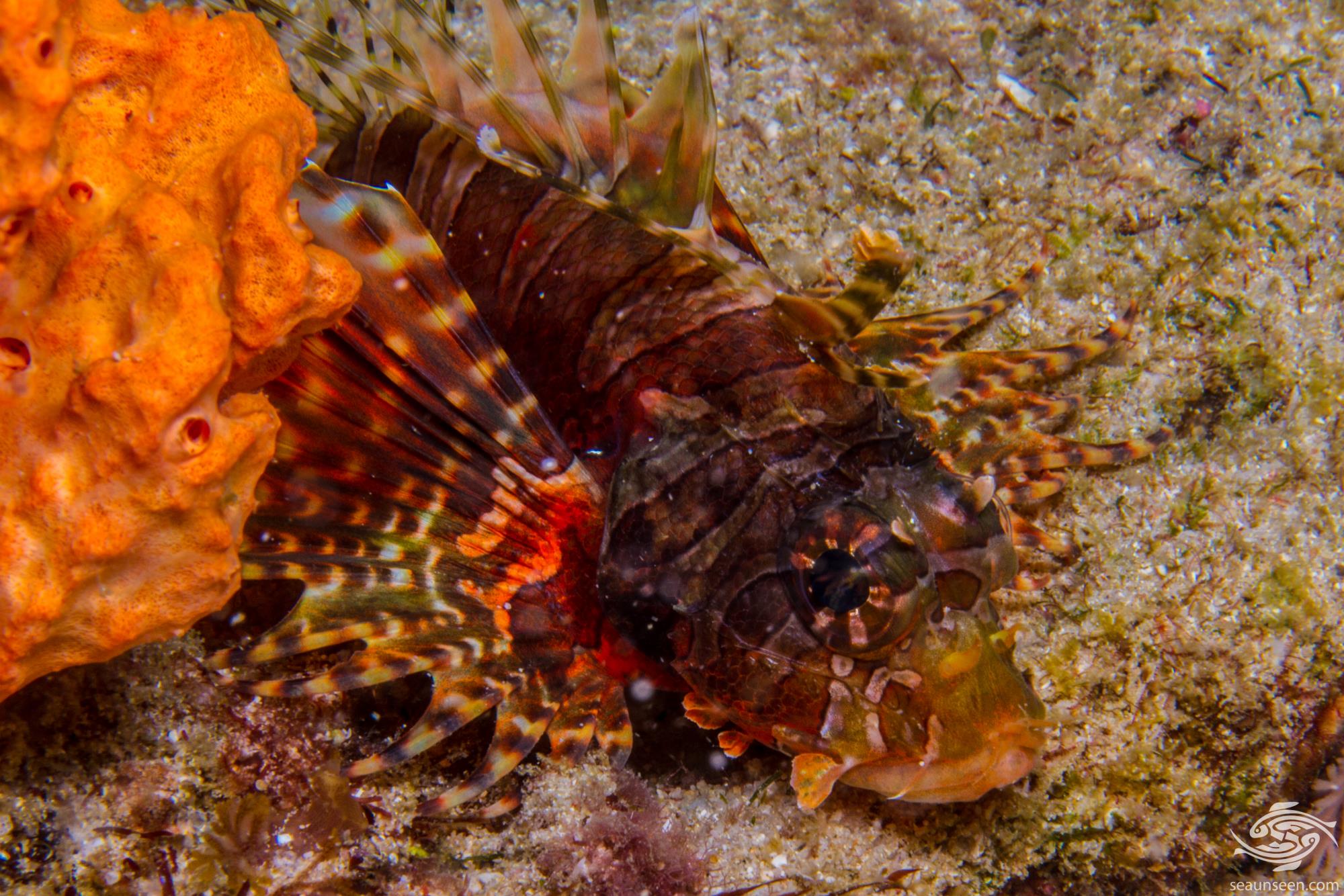 The Fuzzy Dwarf Lionfish below has a series of thin lines forming ornate patterns on its head extending back onto the body and it is these fuzzy patterns that give them their name. These are visible in the image below. The dorsal fins are also more frilly than the Zebra Lionfish. 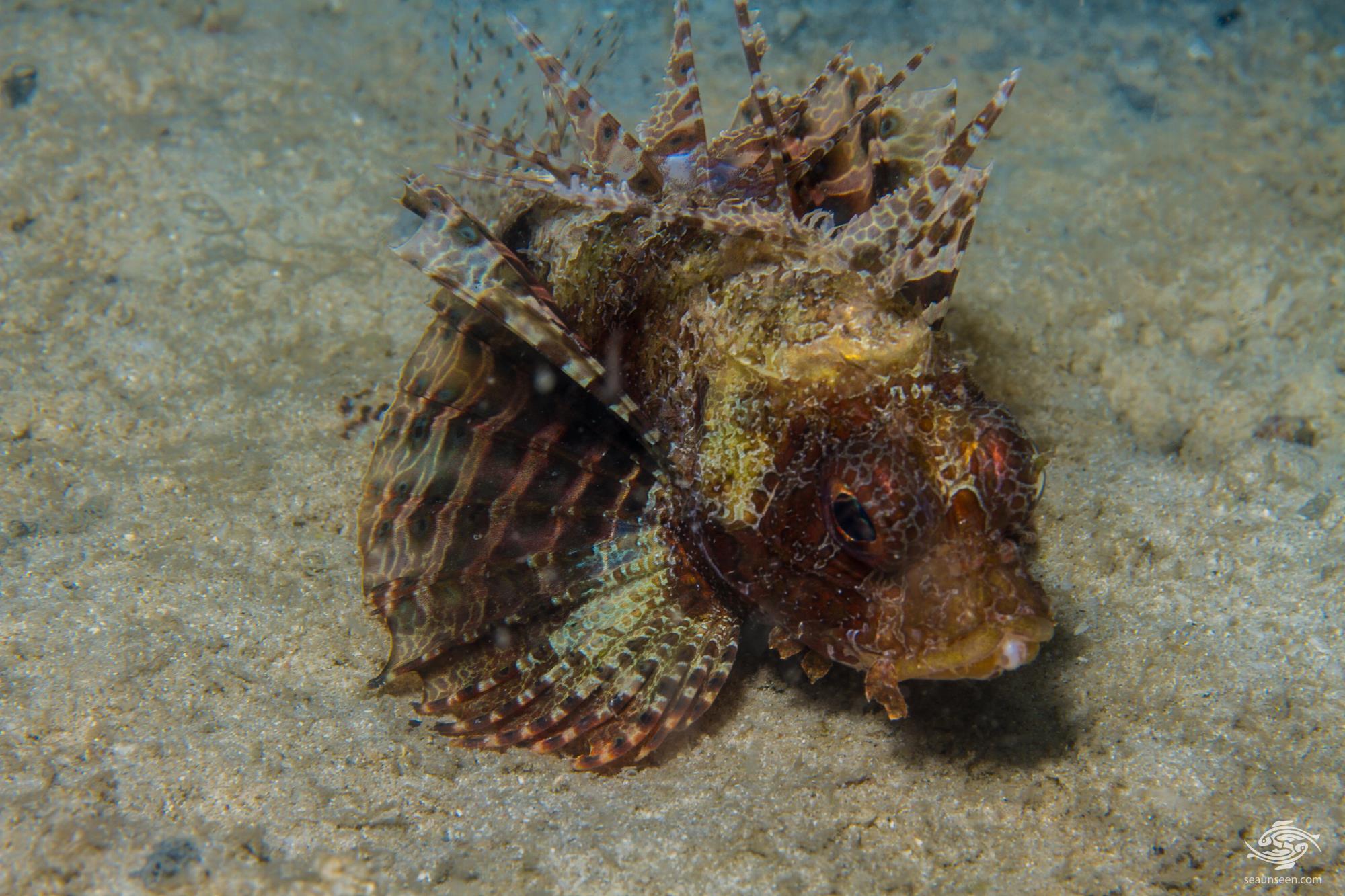 There are three main colour variations of the Fuzzy Dwarf Lionfish, an overall reddish colour , an overall brownish colour and an overall yellow brown colour. The most common in Tanzania is a mix of yellow and brown and this can be seen in the post images. They are one of the smaller Lionfish and grow up to 25 cm in length but this is unusual and they tend to only be around 12 to 15 cm.

All Lionfish and Scorpionfish have a thin outer cuticle of skin which constantly sloughs off . Being slow moving and sedentary, various marine organisms as well as algae tend to grow on them and to prevent this growth from taking too much of a hold, the outer layer of skin is replaced regularly.

FUZZY DWARF LIONFISH IN THE WILD

The Fuzzy Dwarf Lionfish are not commonly seen during recreational diving on the East African coast, because few people dive on open sand and grassy beds. During the day they will usually hide in or under any available feature and being nocturnal feeders will come out at night.  If one dives in these areas at night they are common and are seen out in the open on the sand. Some specimens will readily take advantage of the dive lights and will feast on small fishes that are attracted to the light. 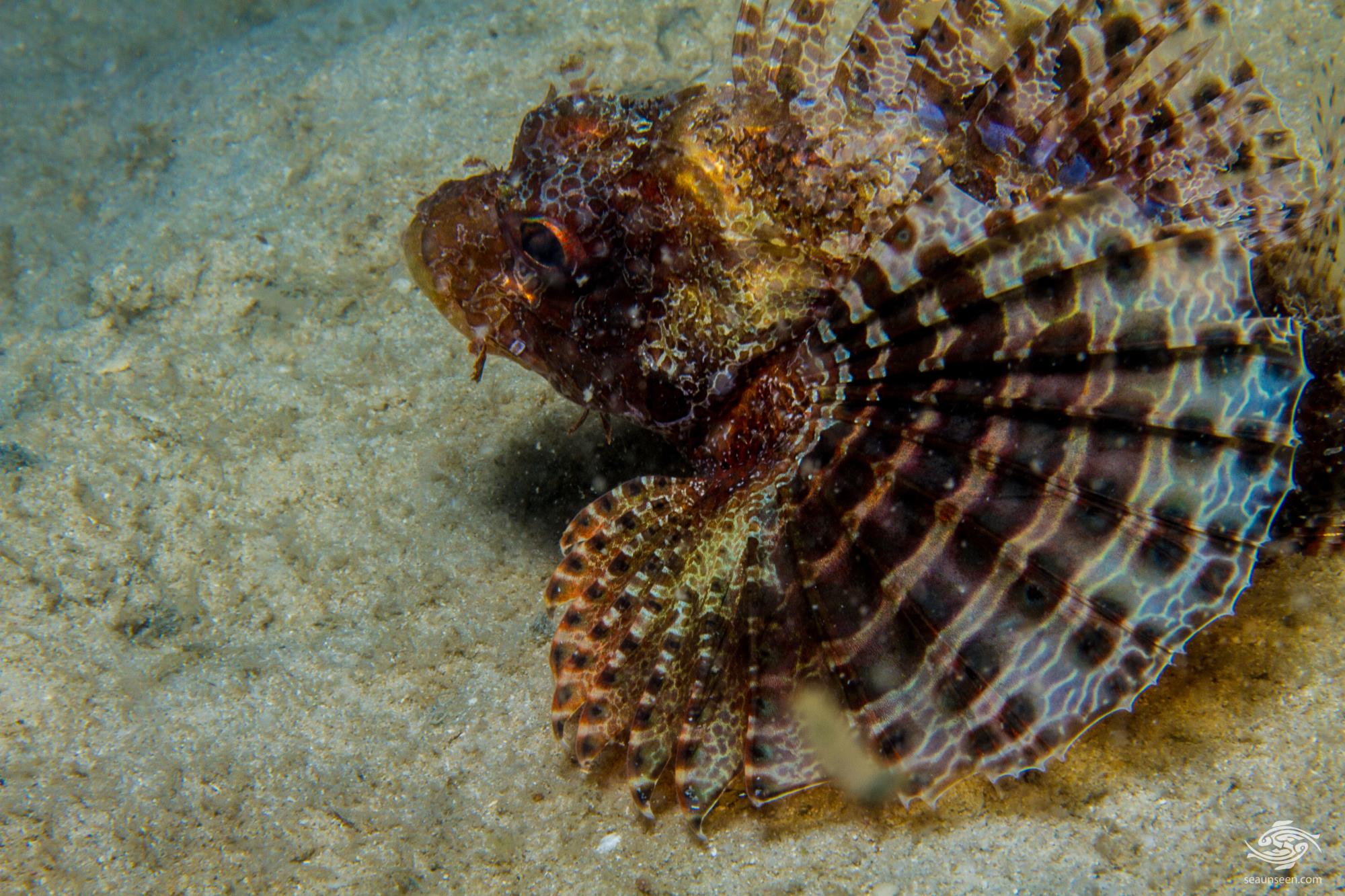 Fuzzy Dwarf Lionfish are found across the Indo West Pacific area, all the way up the East coast of Africa to the Red sea and across to southern Japan and northern Australia and eastwards to Samoa. They are usually found on sandy areas of reef flats ranging from between 3 meters to 25 meters in Tanzania but can be found down to 80 meters. 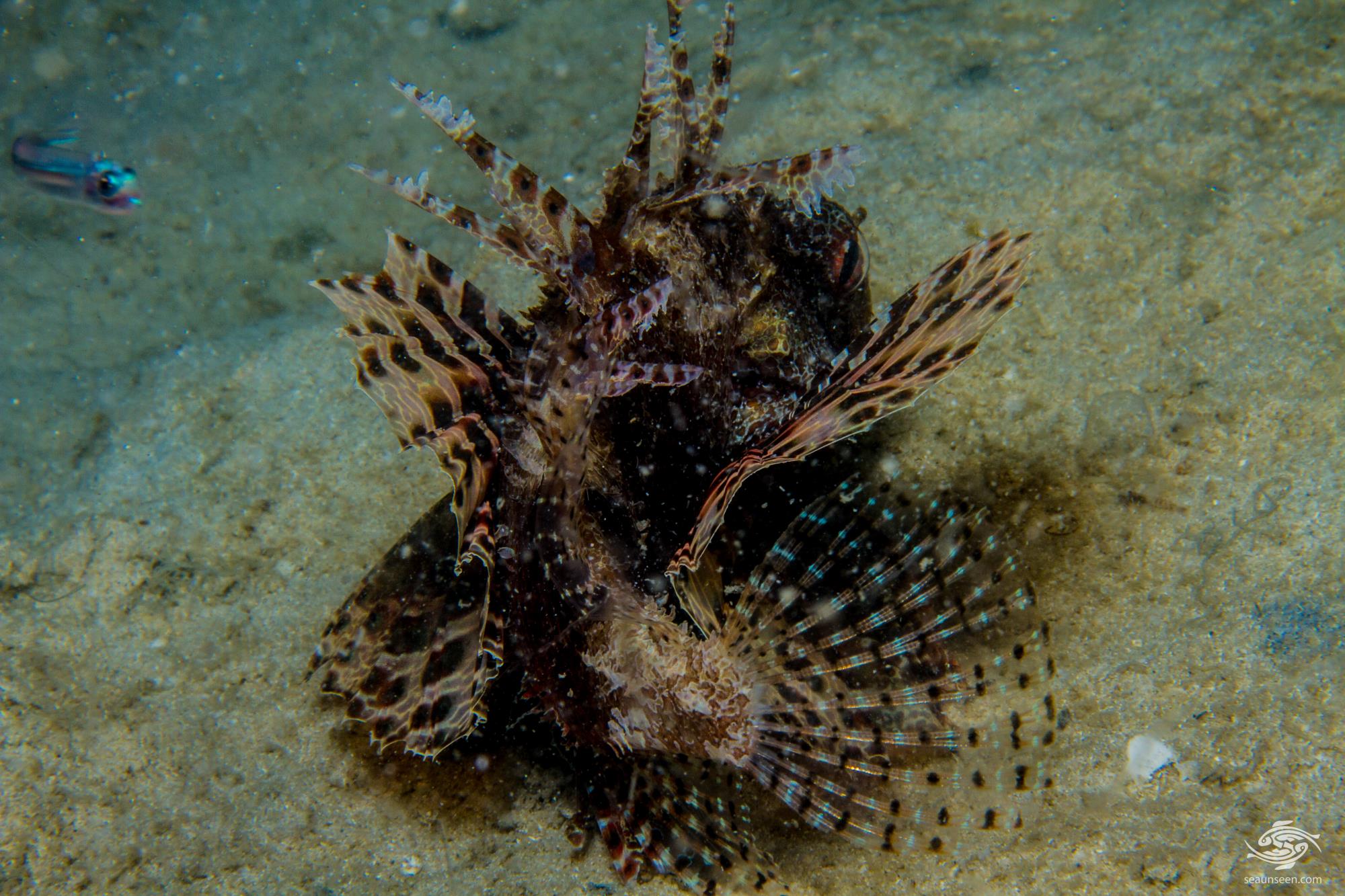 Fuzzy Dwarf Lionfish feed at night and prey on small fishes and crustaceans and pretty much anything that fits in their mouth. They are ambush predators and move into positions where small fishes are likely to congregate. They use their proportionally large mouths to create a vacuum and suck in and swallow the prey. Being smaller than other Lionfish they go after smaller prey. They will sometimes use their pectoral fins to herd prey into a position where they can trap them. 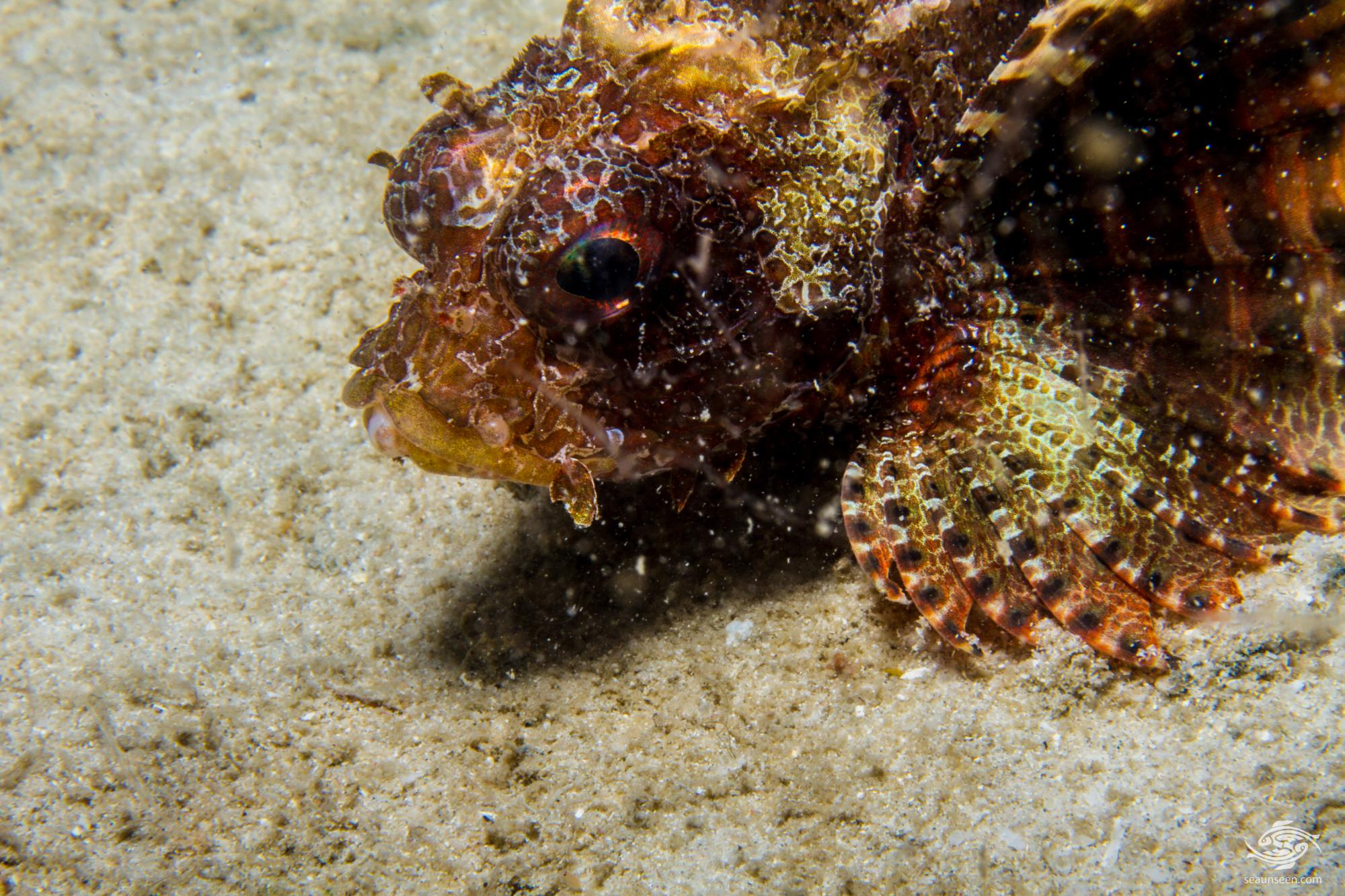 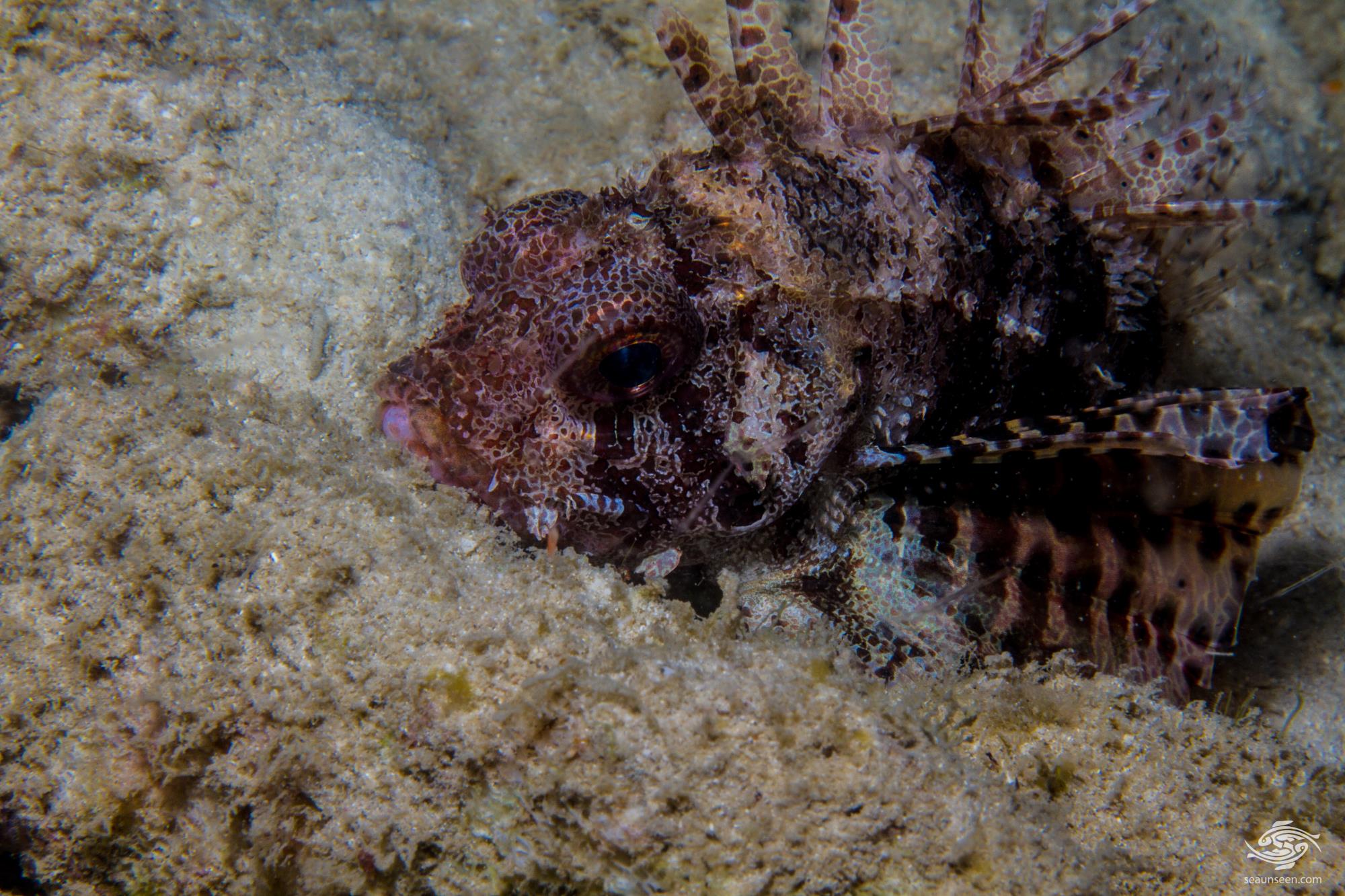 Fuzzy Dwarf Lionfish  are collected in some areas for the commercial aquarium trade and are sometimes caught by indigenous fishermen. The meat is edible although it is not commonly eaten. 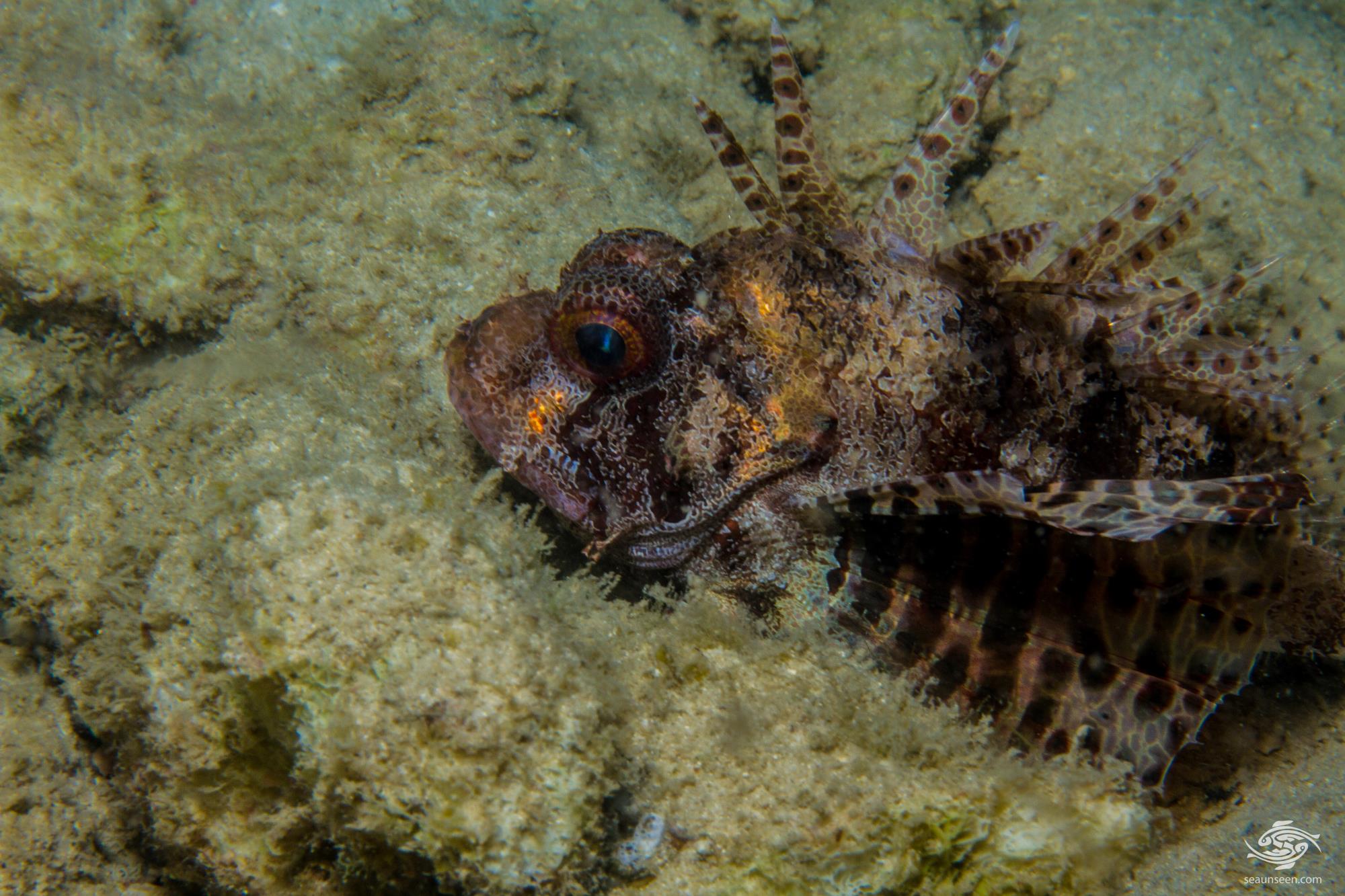 Fuzzy Dwarf Lionfish are kept by some collectors and make an attractive feature in the right type of aquarium. They will eat anything that fits in their mouths and will occasionally try their luck with things that will not fit in if they are hungry enough. As a consequence care has to be taken in choosing their tank mates. They are relatively easy to get across onto prepared foods but require good filtration.