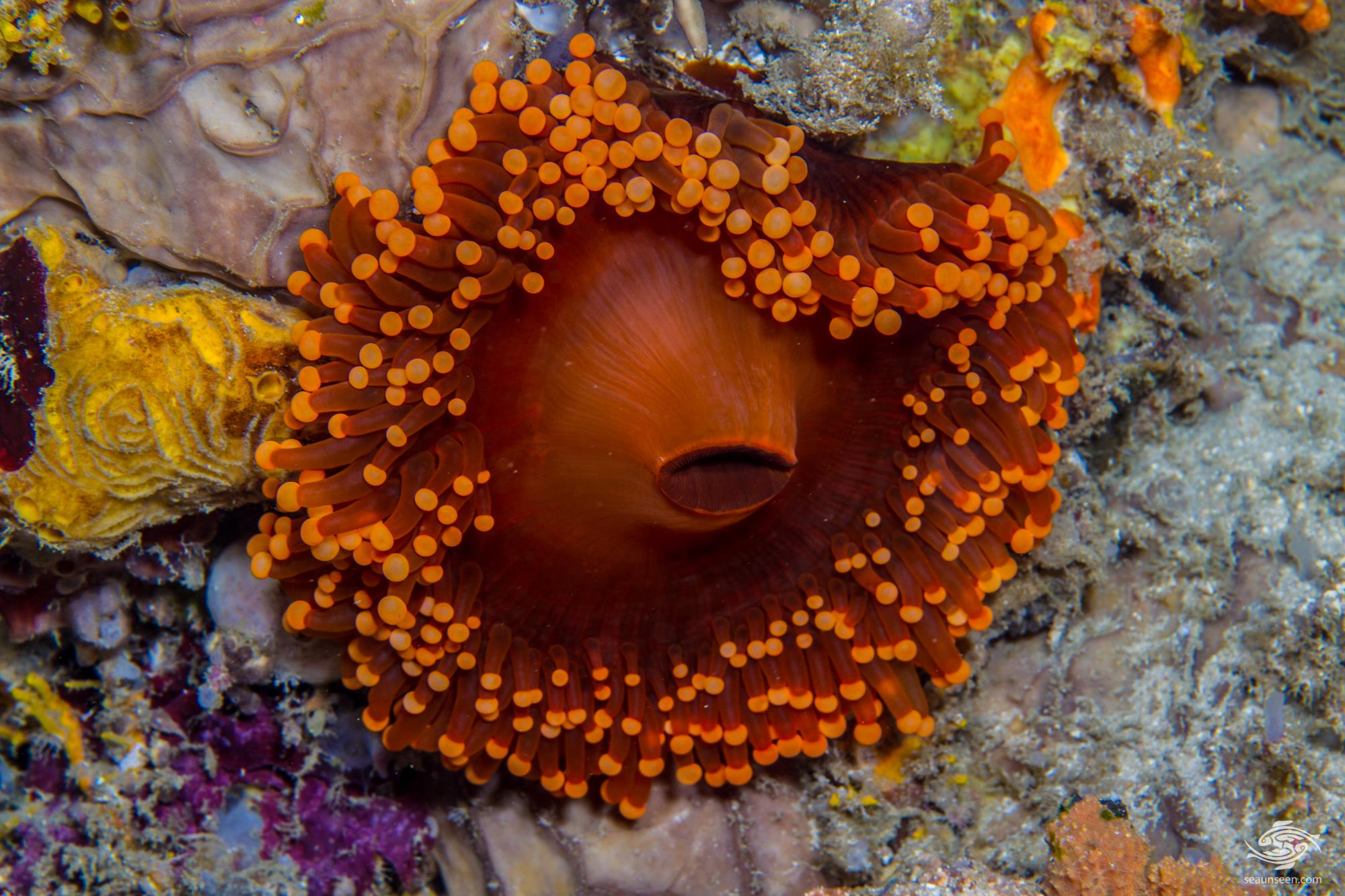 The Giant Reef Corallimorph (Paracorynactis hoplites) is neither an anemone or a coral but falls somewhere in-between. Essentially they are similar to a single polyp coral but without the calcareous skeleton normally associated with them. This lack of a skeleton gives them greater flexibility presumably making movement and feeding on larger prey more practical.

In the areas that they seem to favor they are not common, but neither are they rare. They were first described in 1893 by Haddon and Shackleton, later being moved to the Paracorynactis genus. 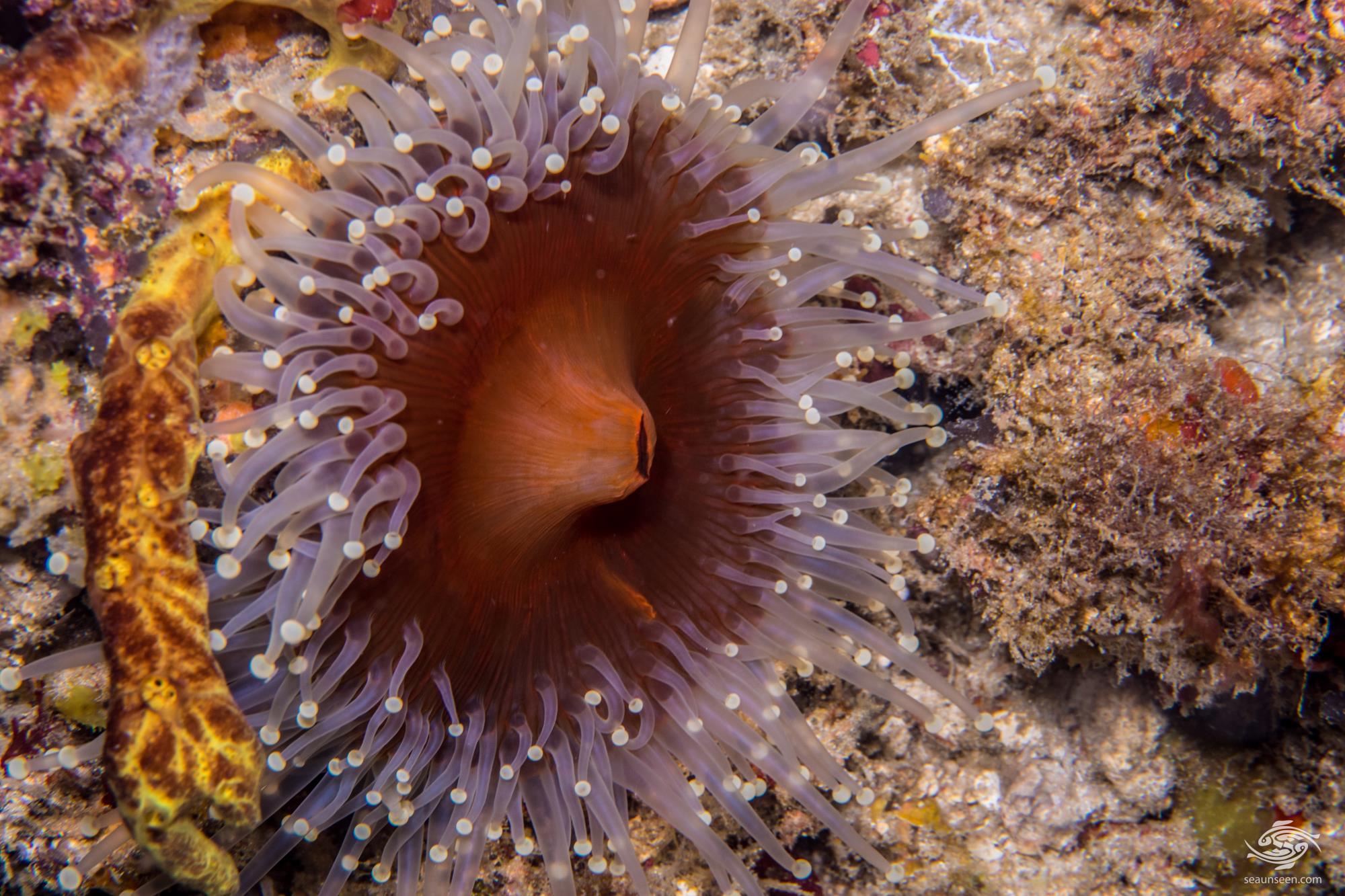 As their name suggests they grow fairly large and the larger specimens may have a width of around 25 to 30cm although around 20 cm is more common. They have a prominent mouth ringed with rows of tentacles with acrospheres on the end. These ball shaped acrospheres are reportedly very sticky although we ourselves have never tested to see if this is correct.

They also reportedly have a fairly powerful sting.  The tentacle’s occasionally match the body in color, but this is not normal. Usually the body is brown to orange and the tentacles are a white to light brown color with yellow or white tips. Only on two occasions have we seen a totally orange specimen.  The foot is sometimes partially visible and appears quite thick proportionally. 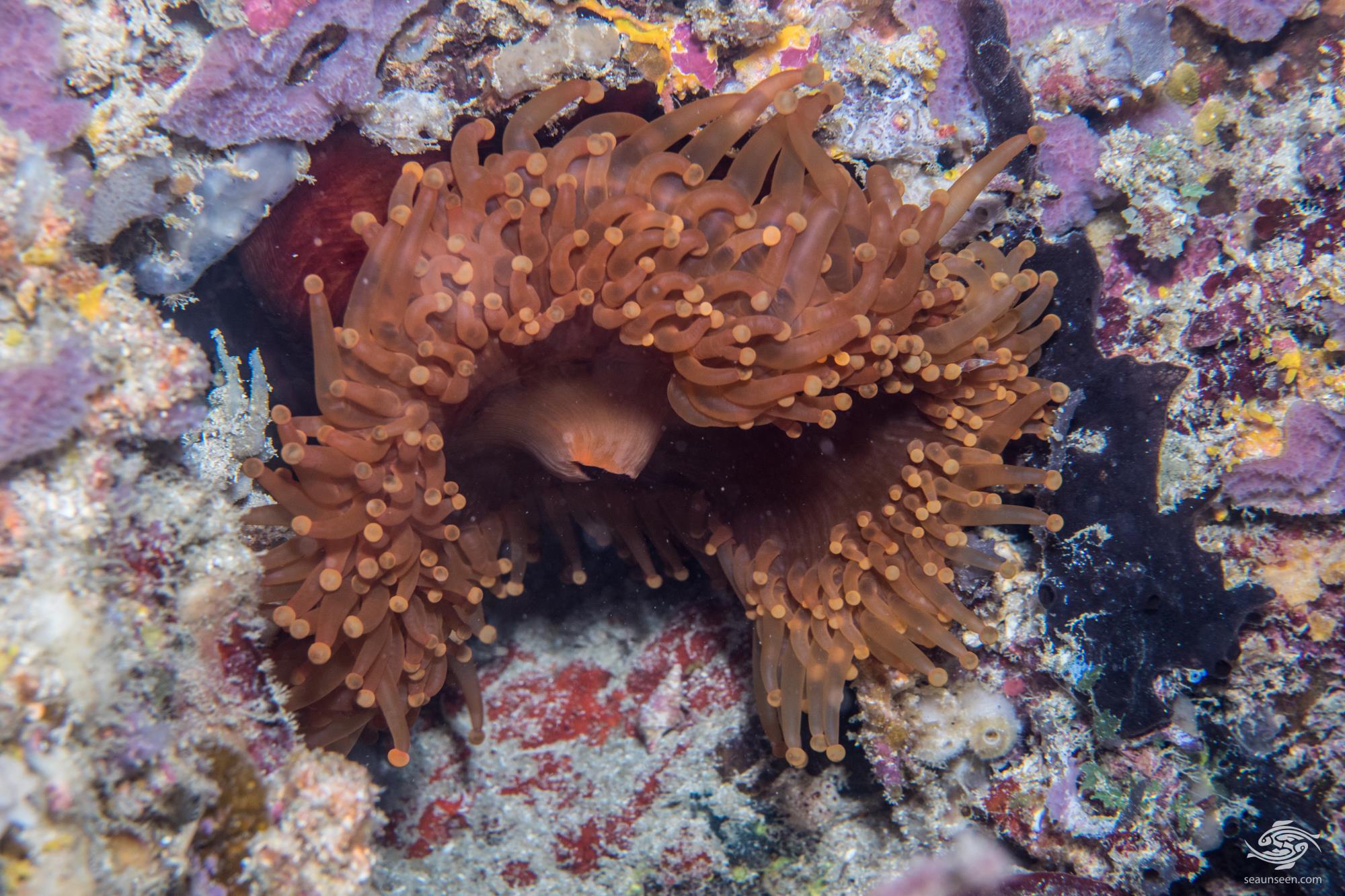 GIANT REEF CORALLIMORPH IN THE WILD

In Tanzania the Giant Reef Corallimorph is always found below 20 meters and seems to prefer vertical walls with abundant coral and sponge growth. We have seen them down to at least 40 meters and suspect they may go deeper. Off of the east coast of Mafia Island we have seen them on the bottom at around 35 meters also in areas of abundant corals and sponges. They usually have a prominent position at right angles to the current.  We have checked all the large specimens we have observed for any shrimp or fishes but have never found any. We have never found them in caves or crevices and they are always in the open. 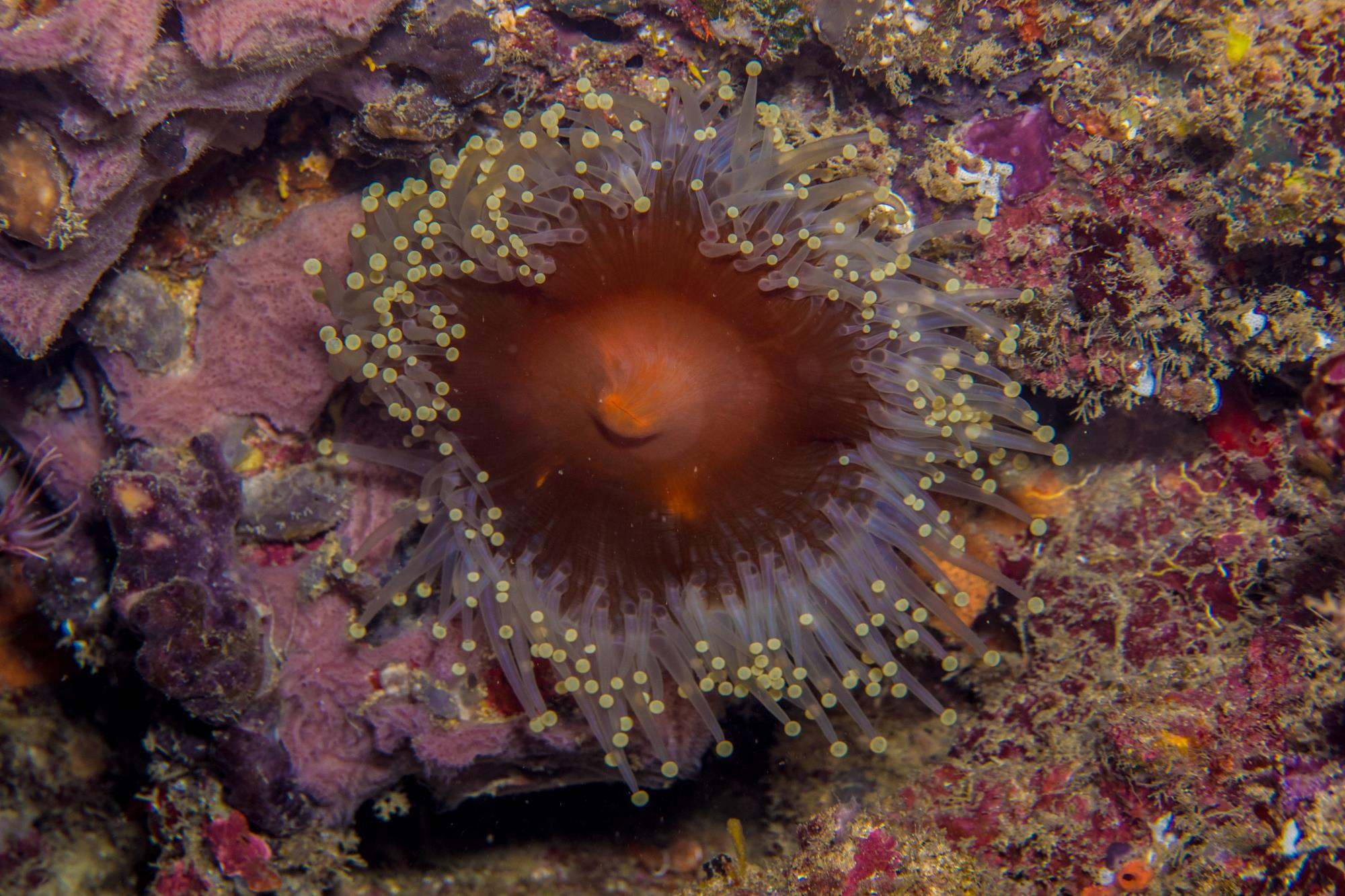 Other species known to associate with them are the Squat Shrimp and the Banded Coral Shrimp. Although we regularly see these shrimp around other anemones we have never seen them around this species. In other parts of their range Cardinalfish and Gobies have been found in them but this we have never seen. 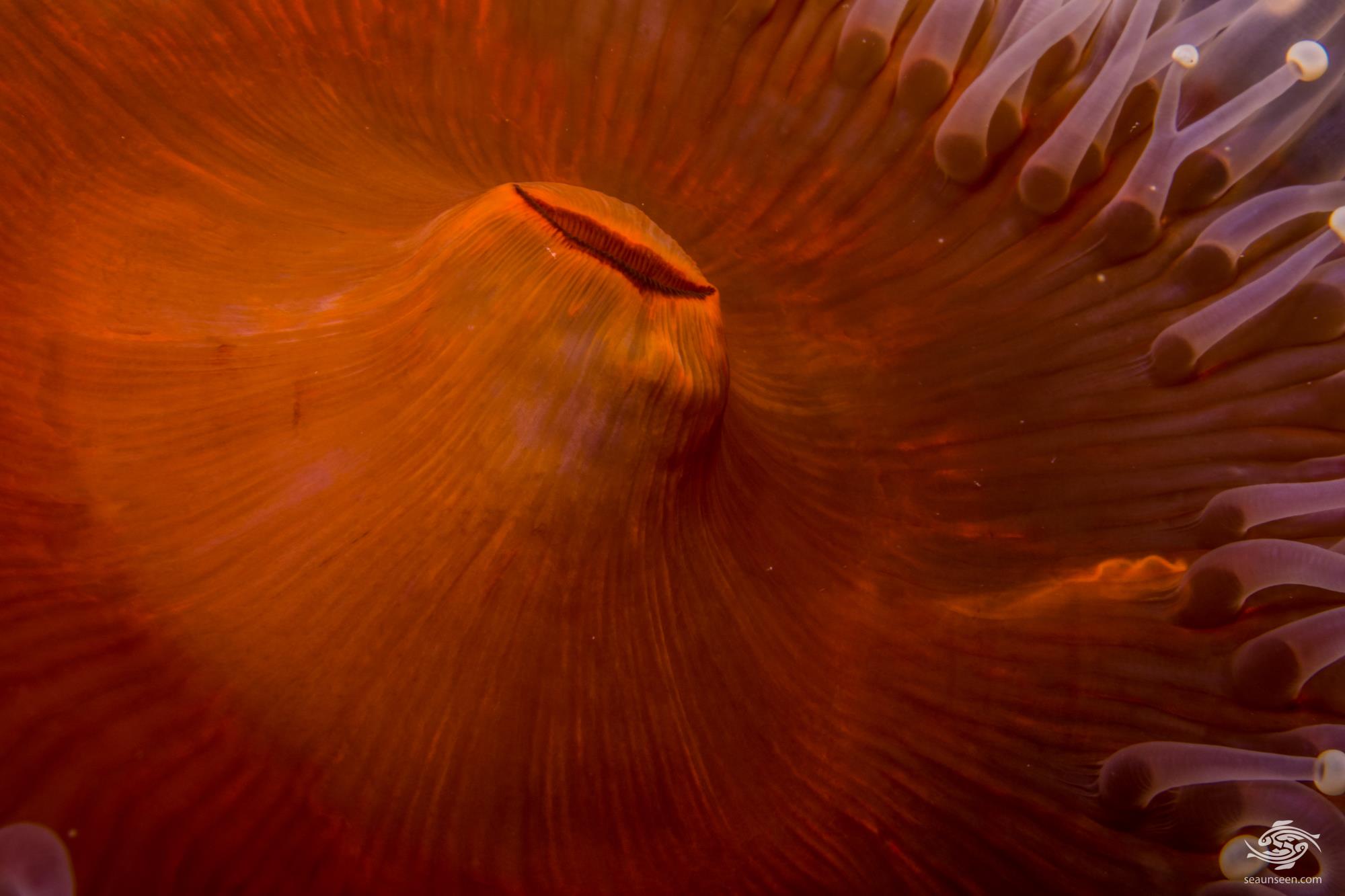 The Giant Reef Corallimorph certainly has the ability to move using its foot and one may see one in a certain spot for a few weeks and then they disappear , presumably having moved their location. 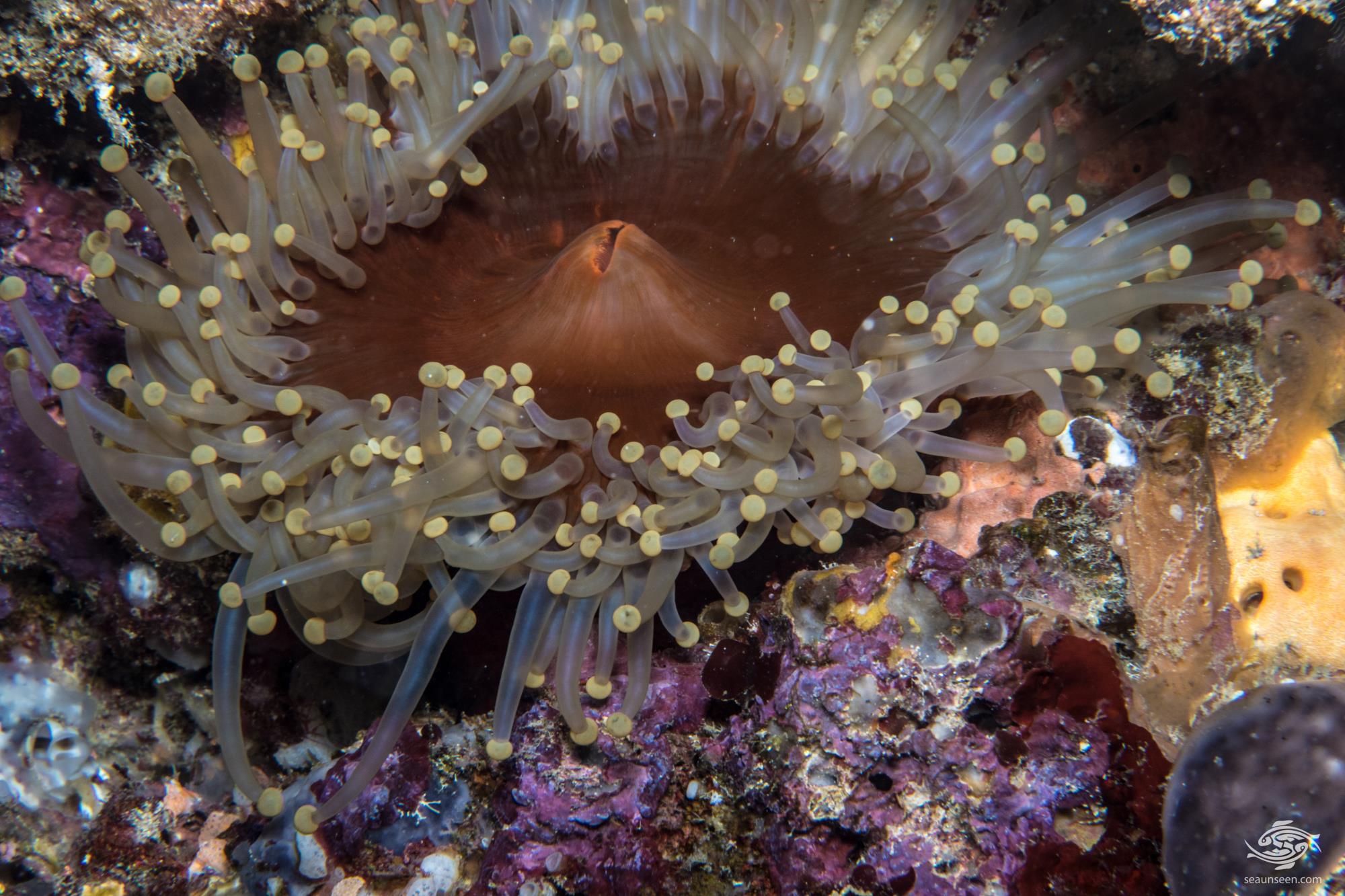 The Giant Reef Corallimorph has been found in East Africa, Australia, Indonesia, Malaysia, the Marshall Islands, Papua New Guinea and the Philippines.

The Giant Reef Corallimorph has been observed feeding on sea stars, including the crown of thorns sea star, sea cucumbers, short spined urchins, brittle stars and even nudibranchs. Reportedly once they sense potential prey they are capable of extending their body towards the prey and latching onto it with their sticky tentacles. The mouth is then extended over the prey and smaller prey is swallowed whole. Larger prey such as the larger sea stars may escape by dropping a limb. They are also able to feed on passing planktonic matter.

To date we have never observed such behavior and the large specimens we have seen are always prominently positioned in the open with plenty of passing current. Because of the nature of their body they are flexible and capable of expansion allowing them to feed on prey which are as large as themselves. 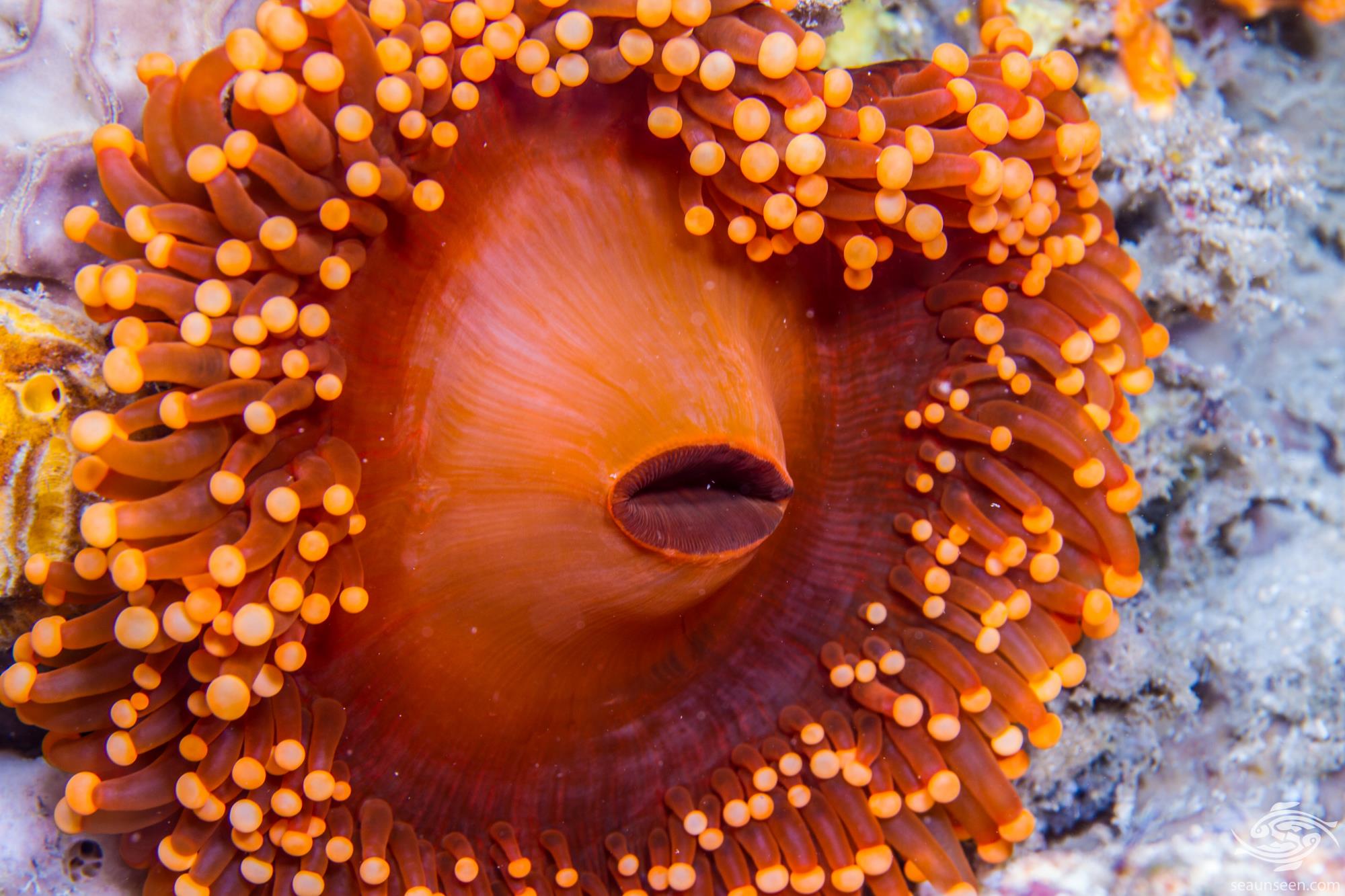 Virtually nothing seems known of their reproductive habits which are presumably a mix of those of the single polyp corals and anemones.  Bar the image of the smaller individual lower in the post which may or may not be of the same species, we have never seen a small specimen and all the other specimens we have seen have been in excess of 15 cm in width. 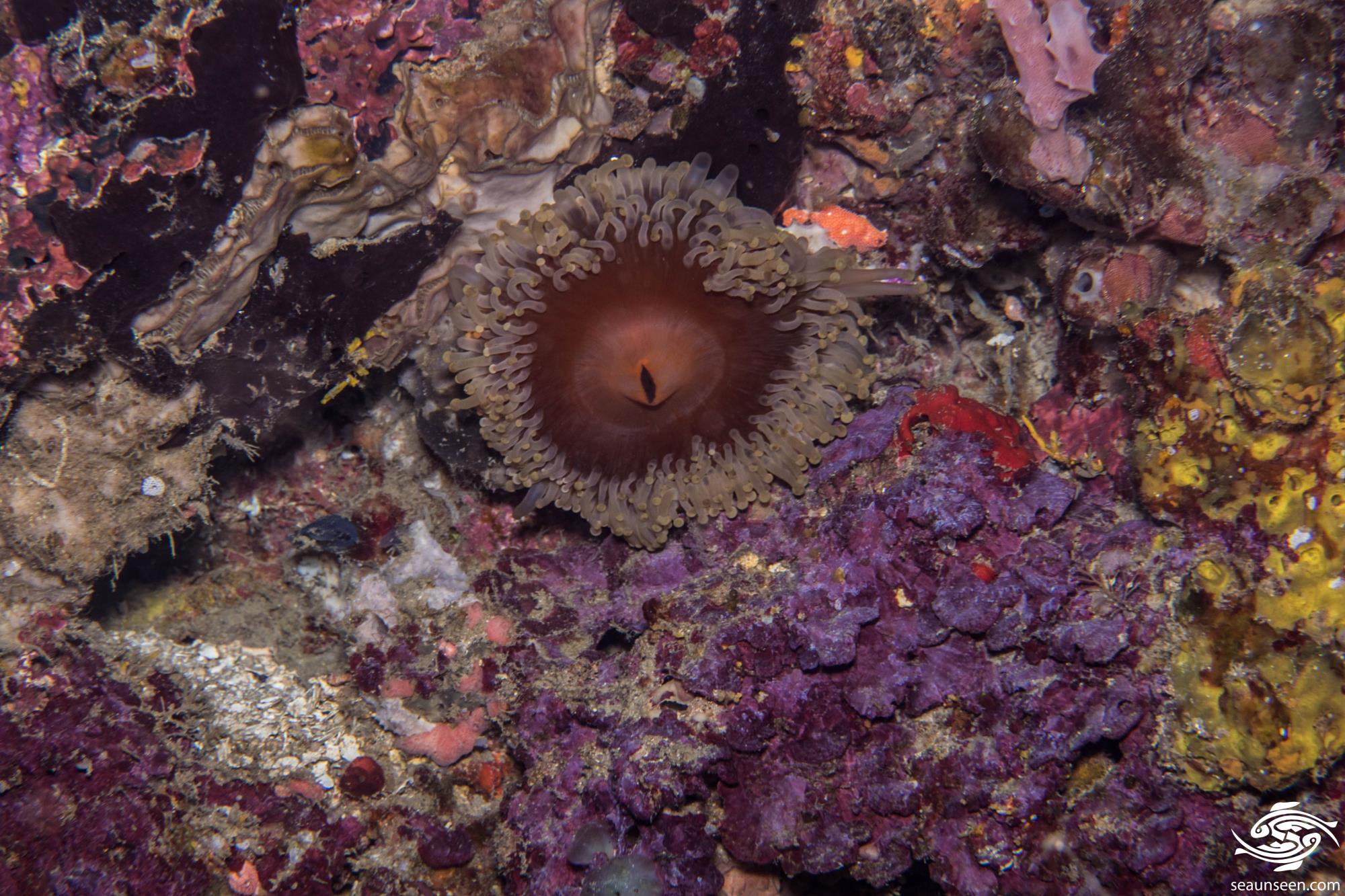 Giant Reef Corralimorph’s are kept in aquariums and there is a good article here on them. They are reportedly quite easy to keep and will readily accept shrimp and meats . 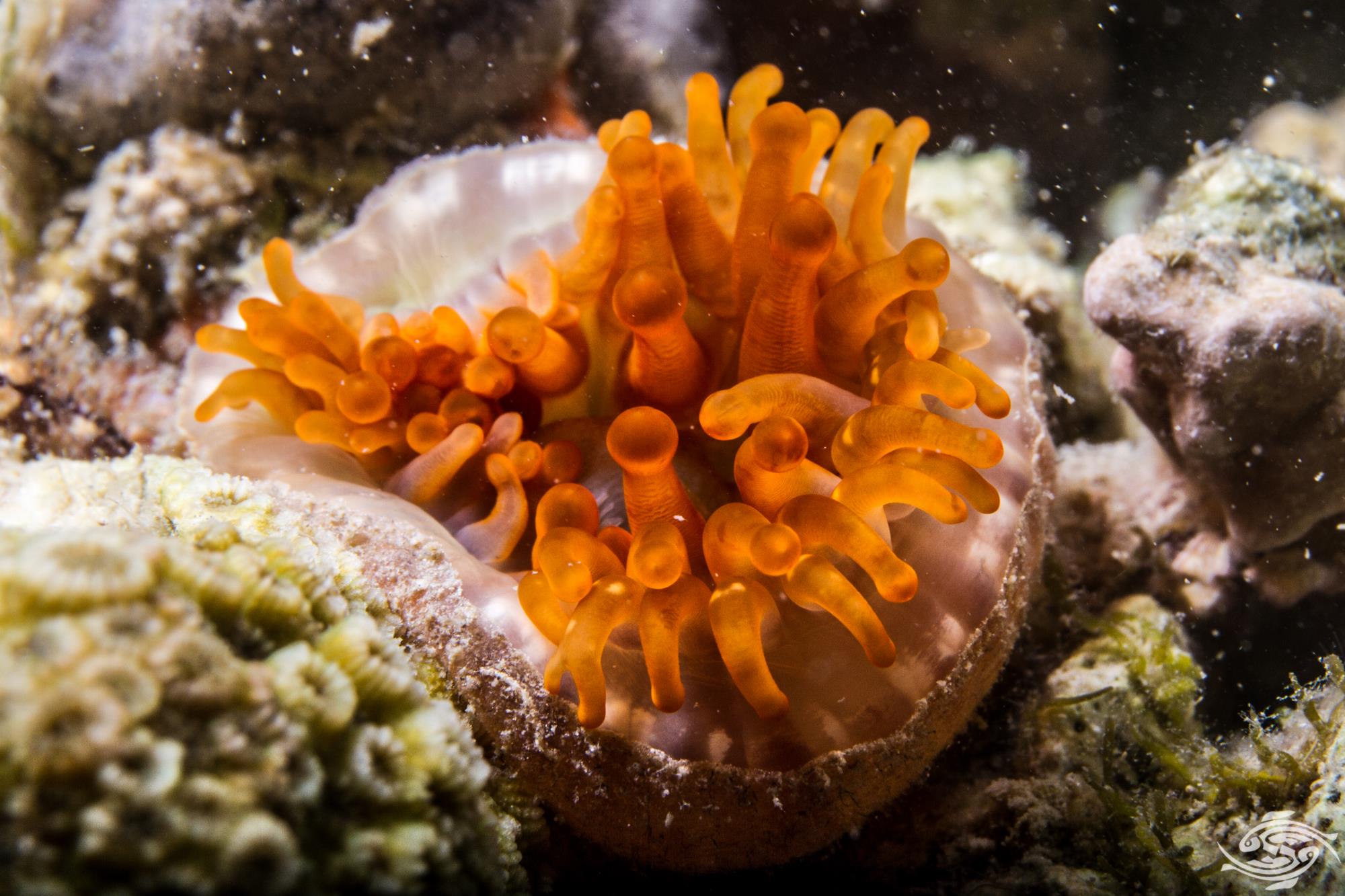