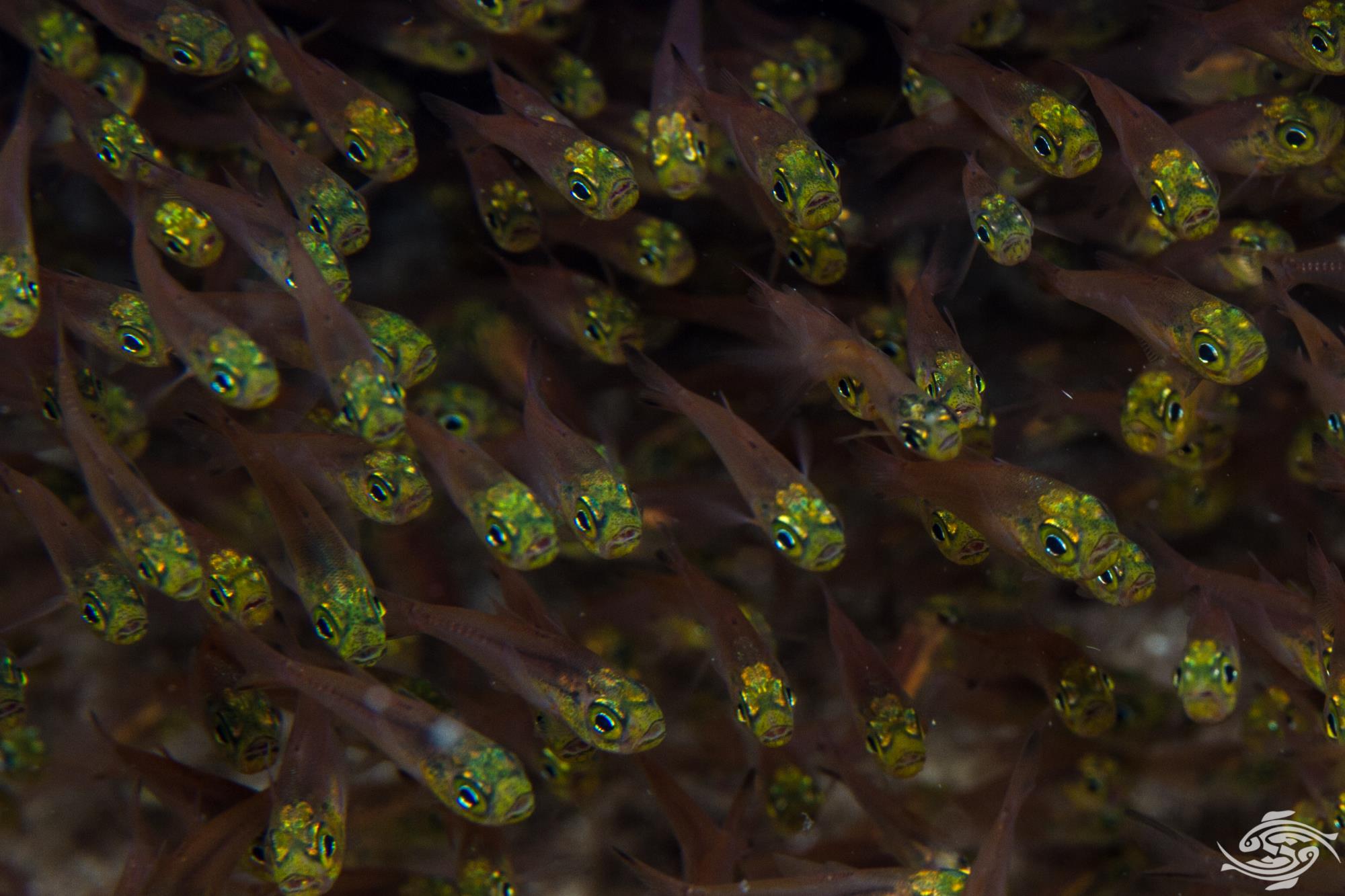 The Golden Sweeper (parapriacanthus ransonneti) is also known as the Slender Sweeper, Ransonnet’s Bullseye and the Pygmy Sweeper. They are extremely common fish on Tanzanian Reefs and as can be seen in the images are often found in extremely large numbers. 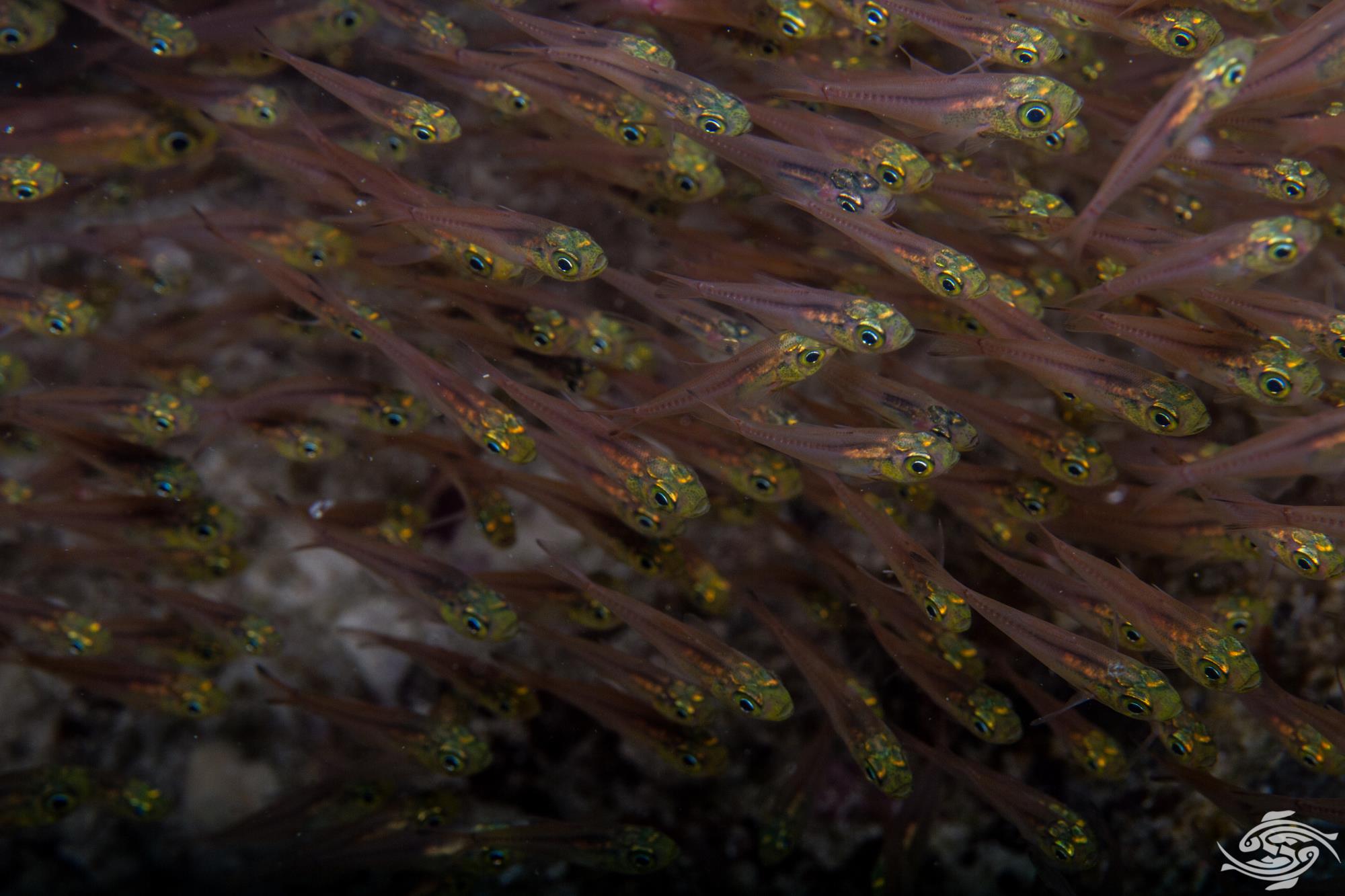 The more juvenile Golden Sweeper which can be seen in the image immediately above, is more of a pinkish translucent colour compared to the adult. Adults have a more coppery coloured body with a bright yellow green coloured head that almost appears luminescent. In their stomach they have luminescent organs which can be seen in some of the images if one looks carefully. They grow up to 10 cm in length. They have proportionately large eyes and in many ways resemble Cardinalfish but they have a single dorsal fin and are easy to distinguish because of this. 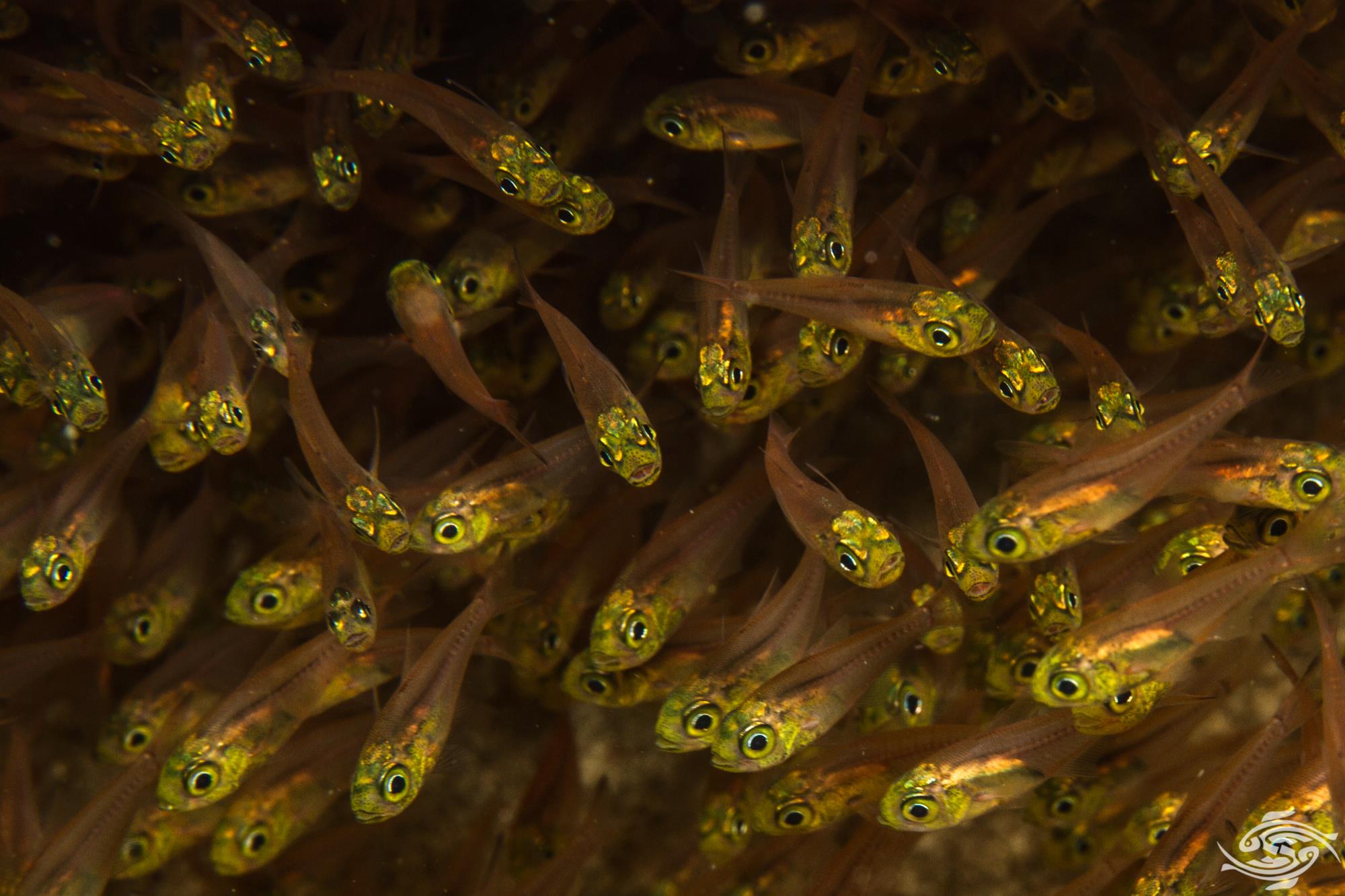 GOLDEN SWEEPER IN THE WILD

The Golden Sweeper are nocturnal feeders and during the day collect in large  shoals under overhangs and in caves. The shoals can often be very dense and of quite some size. The shoals often contain separations into sub shoals of different age groups. The adult shoals taking the safer more preferable position. Wherever there are large shoals of the Golden Sweeper there tend to be Scorpionfish in close proximity. Often they are hidden on the sides of the cave that the Golden Sweepers are in or near the entrance. Sometimes as can be seen in the image below, others species such as juvenile fusiliers will join the shoals. 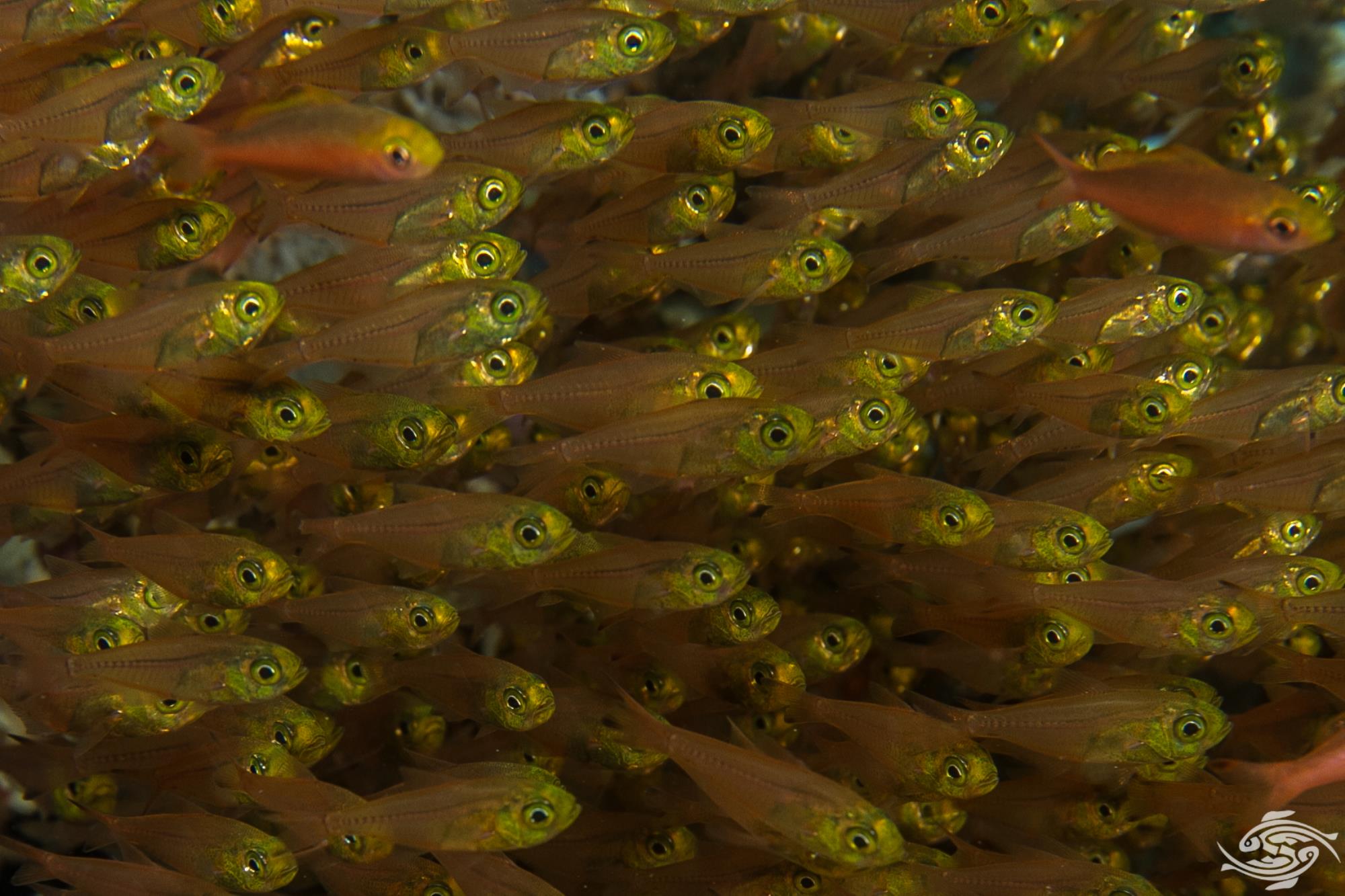 The Golden Sweeper is found from East London in South Africa to the Red Sea and across to Southern Japan and down to Australia where they are known as Golden Bullseyes . They are found from 3 meters down to 30 meters. 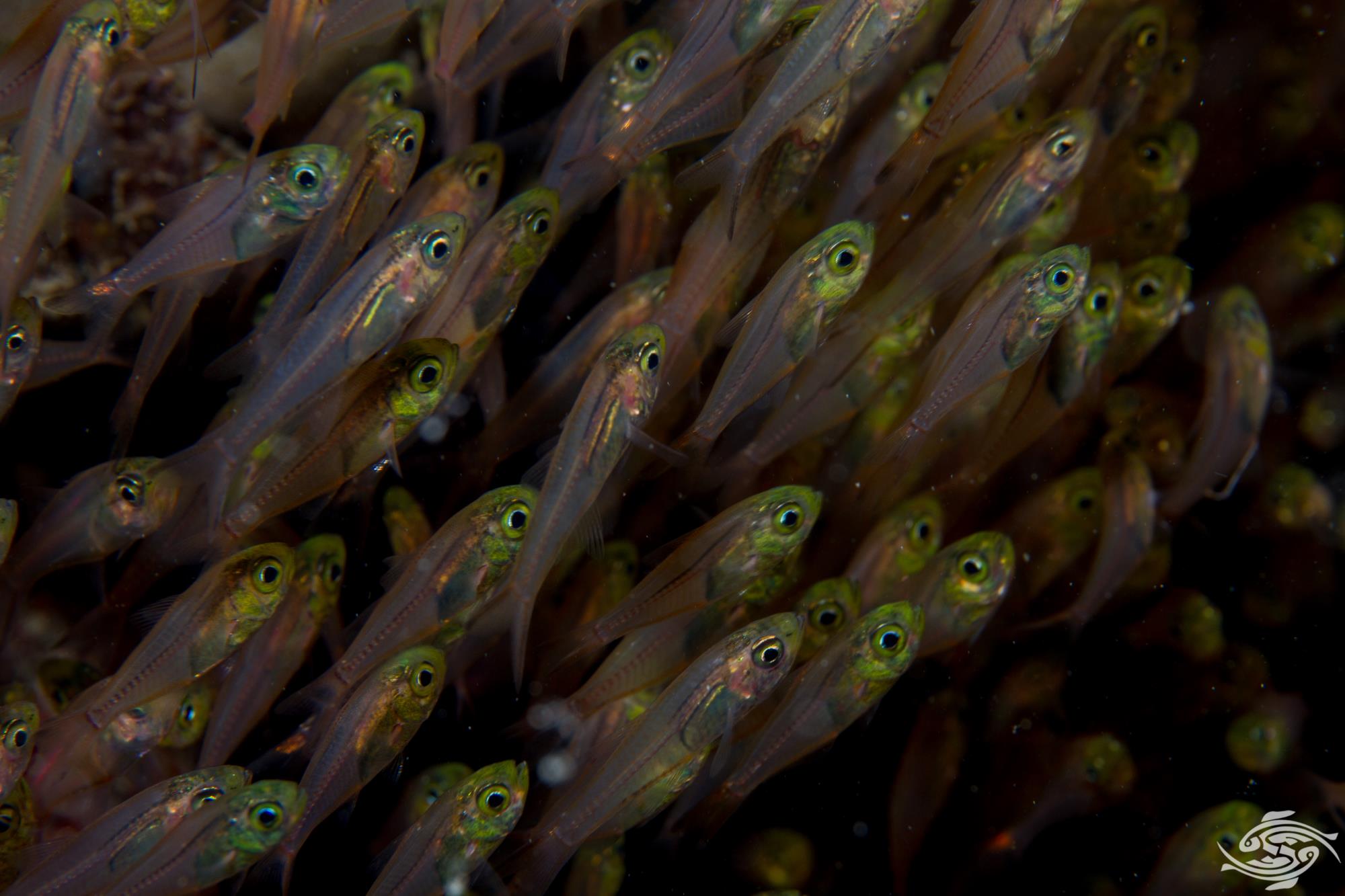 The Golden Sweeper are nocturnal feeders , feeding mainly on zooplankton. Once it is dark they swim above the substrate and feed on the zooplankton. It is not known what purpose the luminescent organs have but they could assist in feeding at night. 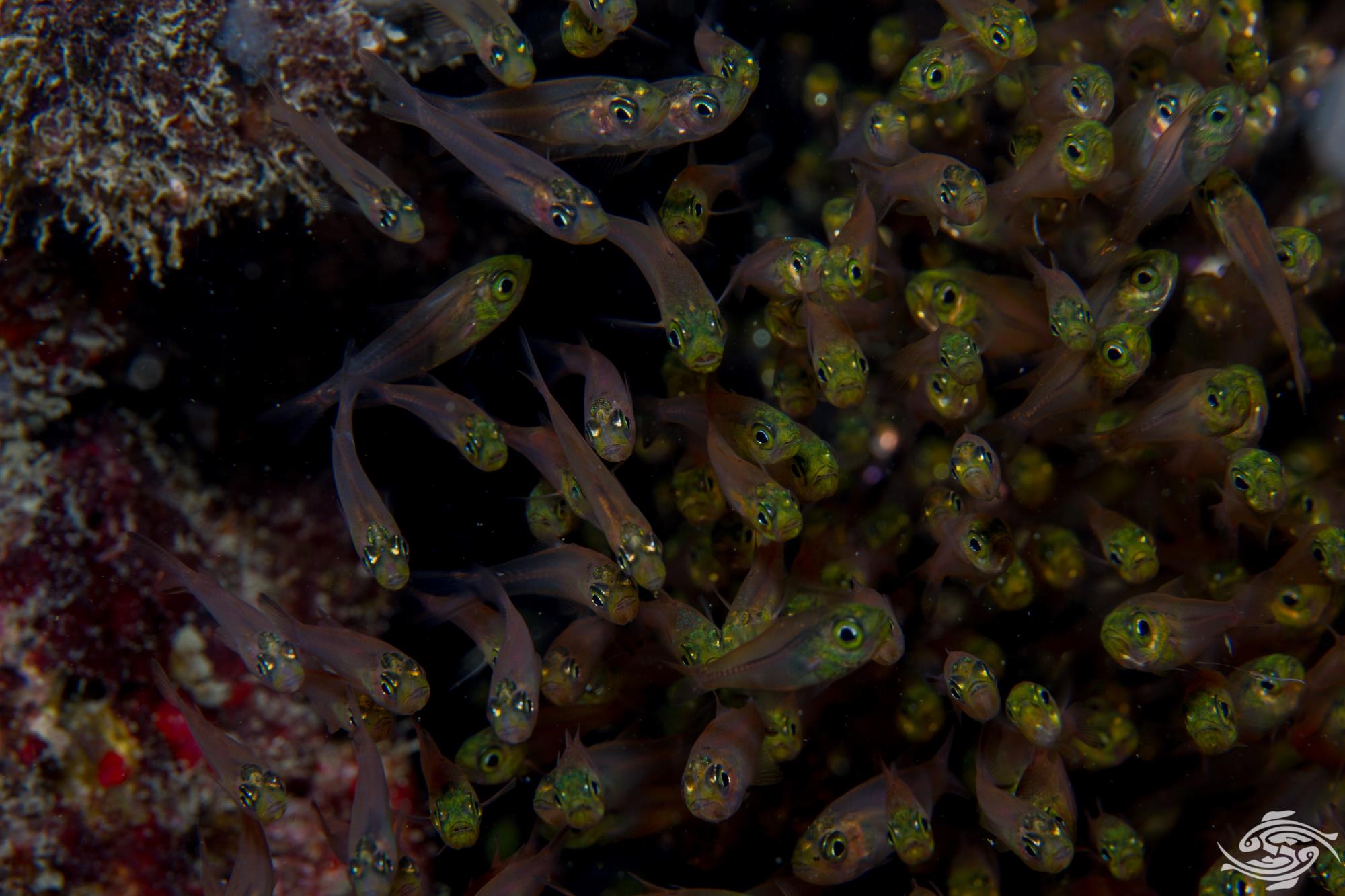 Little seems known about their breeding habits and whether they spawn individually in pairs or whether group spawning takes place.  Research in South Africa indicates that the eggs are free floating and that there are fair quantities of them. 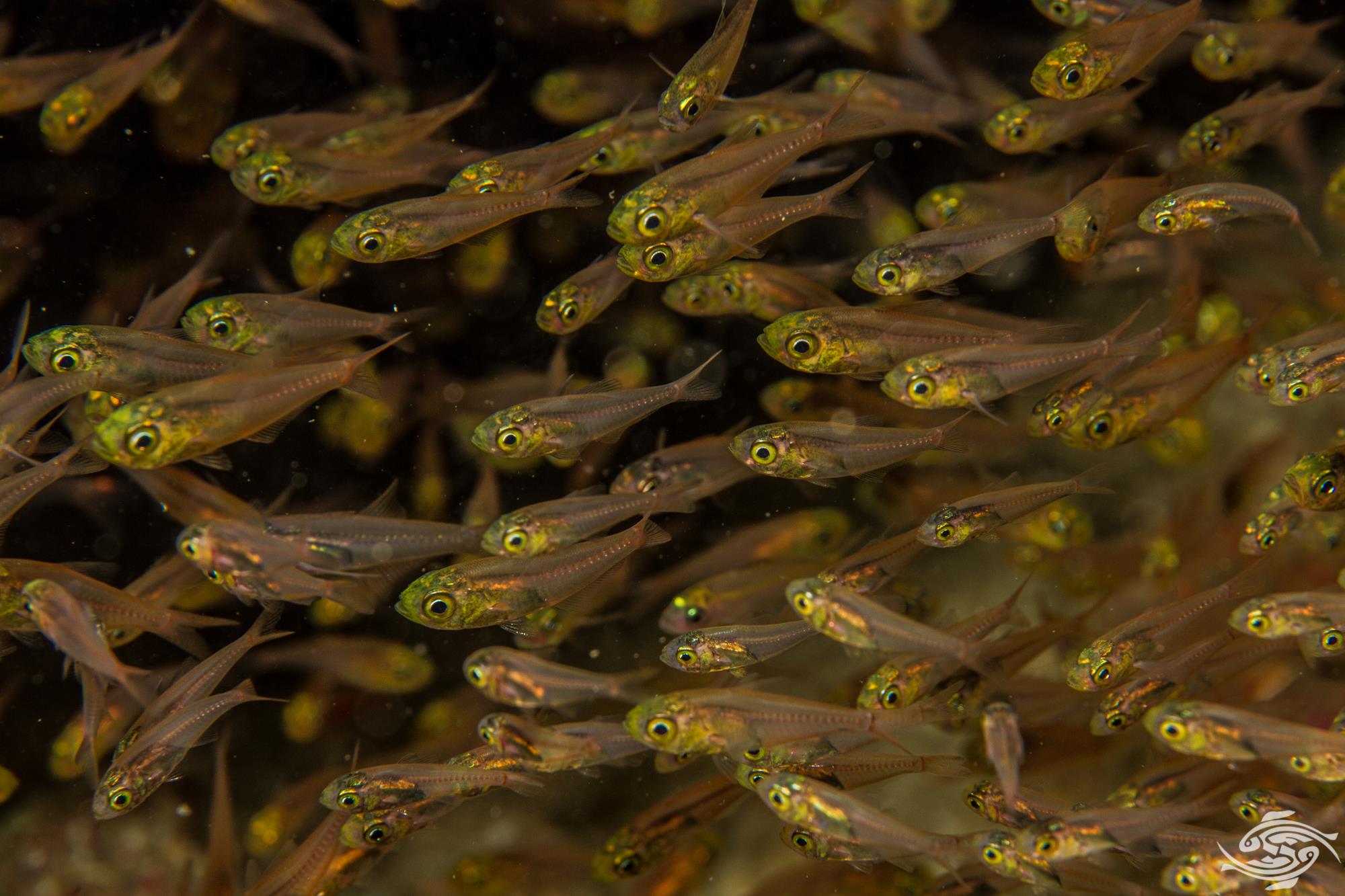 Golden Sweeper are not commonly kept in aquariums, probably because they are reputed not to travel very well.  That said records show that large quantities are exported from Japan to the USA. A small shoal would make an attractive addition  in any aquarium. Being plankton feeders they should be reef safe.
READ OUR OTHER POSTS ON SWEEPERS HERE