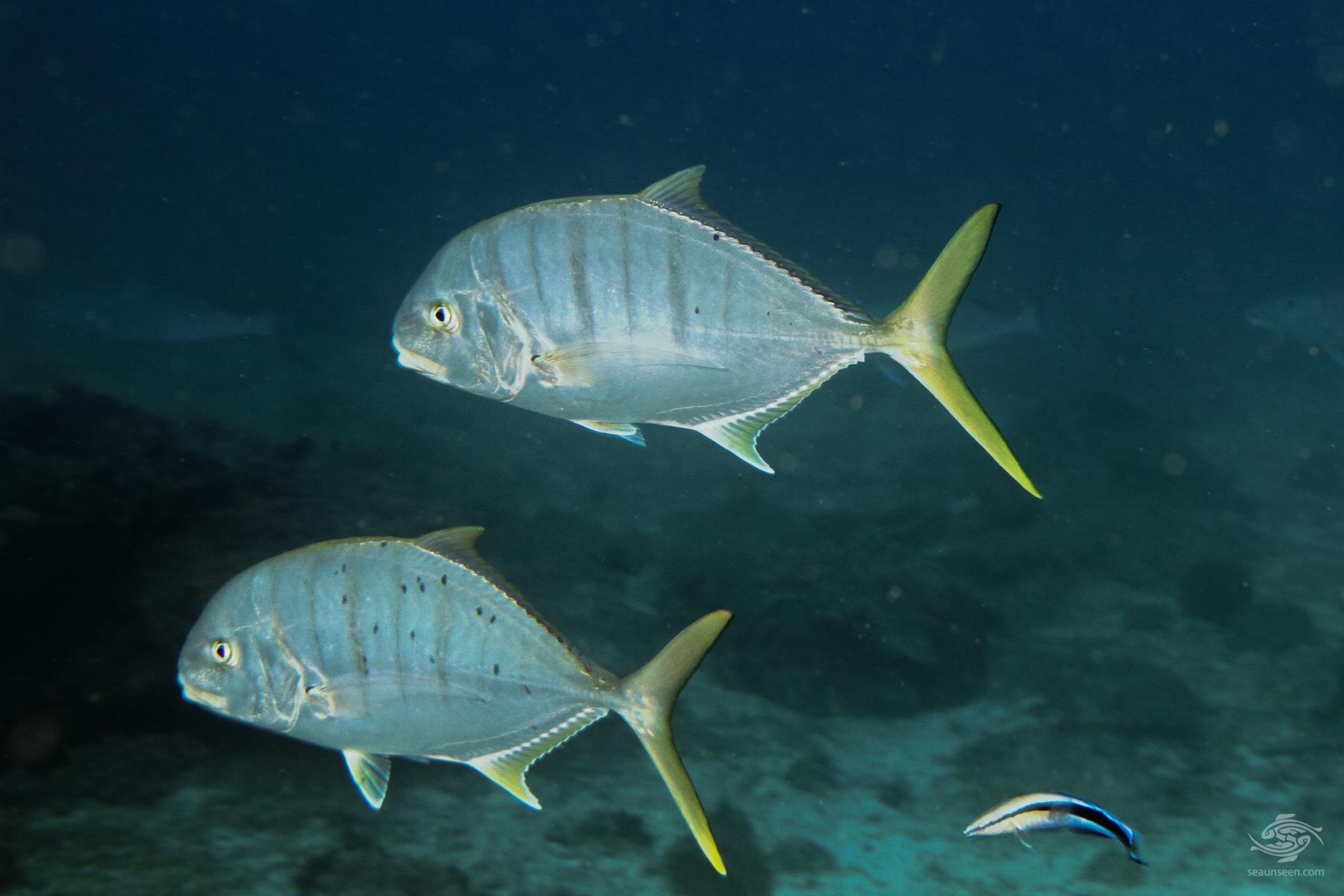 The Golden trevally (Gnathandon speciosus) is also known as the Golden kingfish, Banded kingfish and in Hawaii it is called the Yellow ulua or Papio. It is a member of the horse mackrel or jack family. They are fairly common on the Tanzanian coast.

Small juvenile golden trevally are very similar in looks to pilot fish and have vivid black and yellow stripes. They often accompany larger fish and sometimes even jellyfish for protection, mimicking the behavior of pilotfish. They are commonly seen swimming ahead of whale sharks on Mafia Island. Juveniles can be seen swimming with the whale shark in the image below. 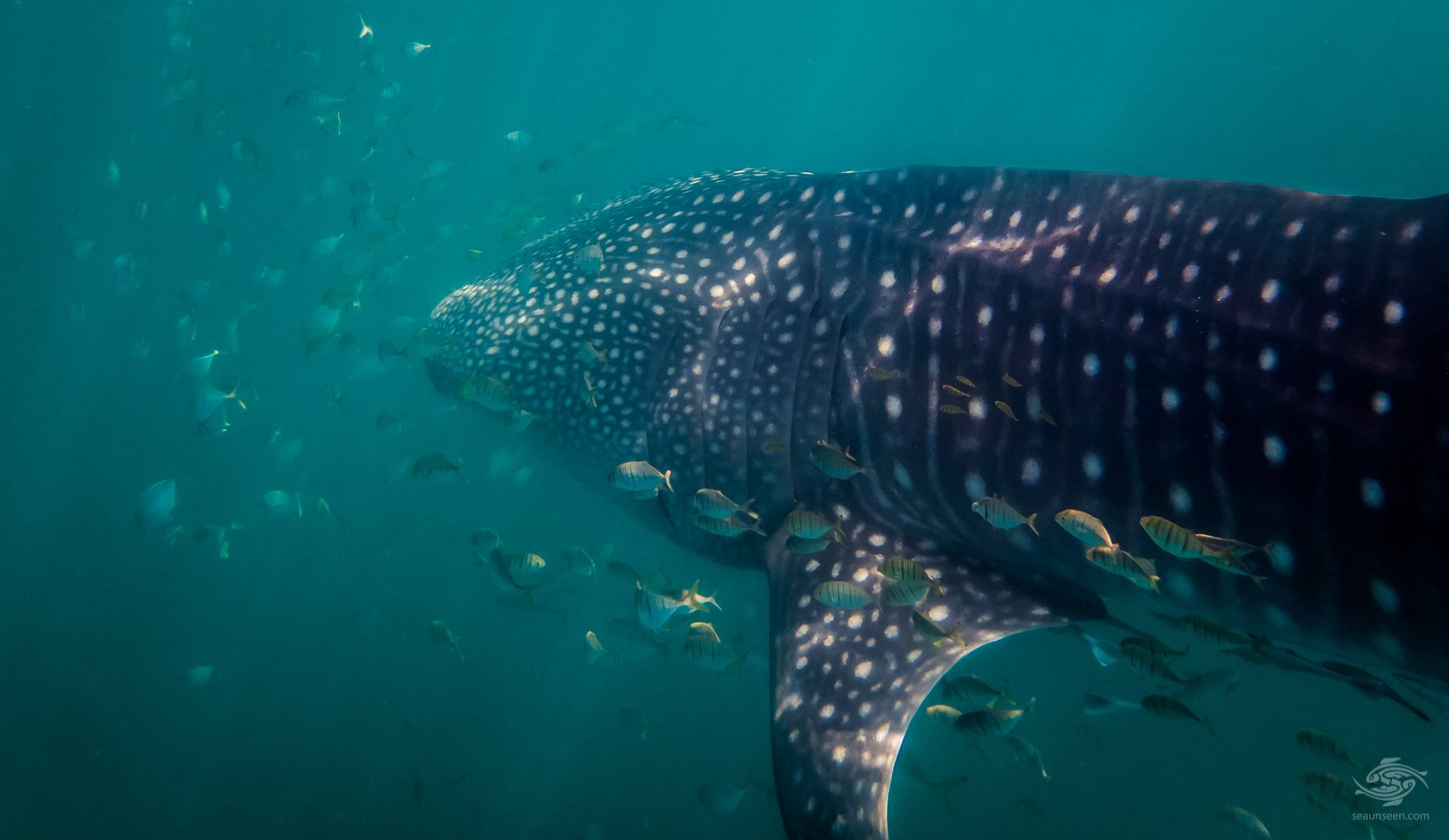 With age the yellow becomes more silver and the black bars fade, although they are still visible and several black spots appear. The fins retain a golden sheen making them quite distinctive. Their lips are more fleshy than their other close relatives. They grow up to 120 centimeters in length and weigh up to 15 kilograms although the world record is 17.45 kg . 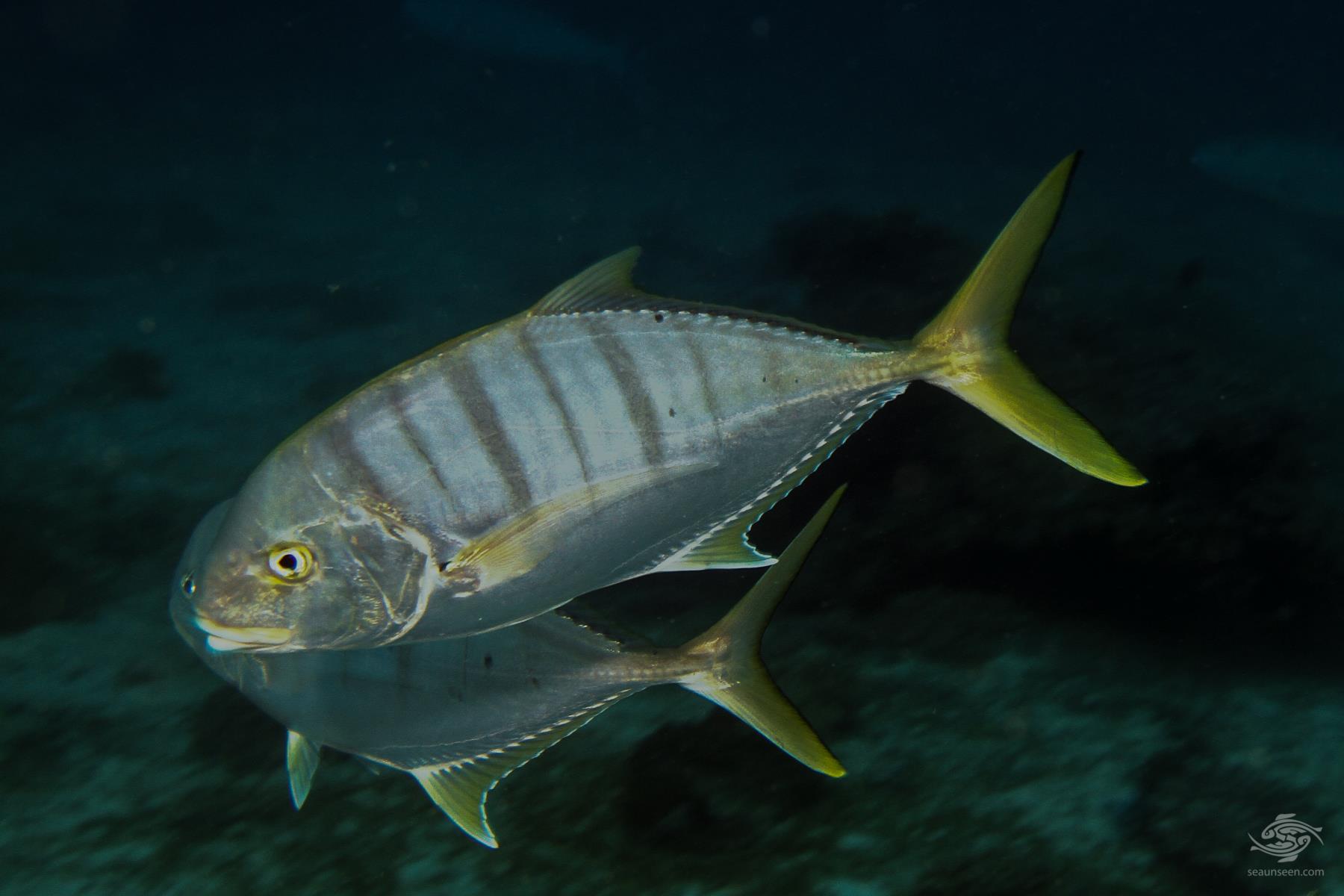 GOLDEN TREVALLY IN THE WILD

As adults they are often curious and will swim up to divers to eye them out. They often return several times to do this. Usually they will not easily let you get closer than a few meters before they swim off. They are powerful fish capable of swimming at a high speed.

The golden trevally is found across the Indo-Pacific area, from the Red Sea and East Africa to the Hawaiian Islands and southeastern Oceania, north to Japan and south to Australia. The fish inhabits areas with sand or rubble adjacent to coral reefs at depths from 1 to 100 meters, but can mostly be found between 5 to 30 meters. 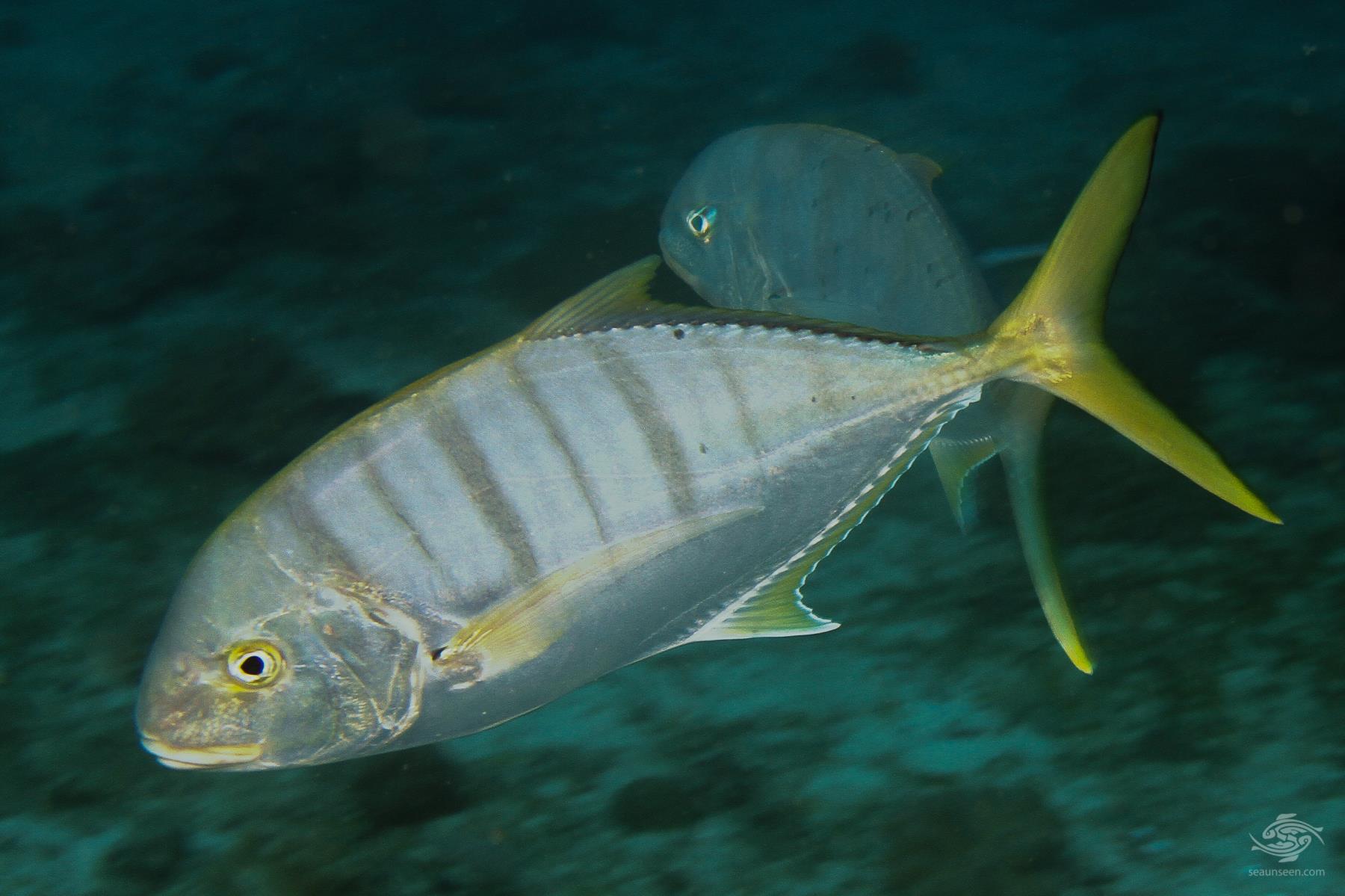 The golden trevally feeds during the day. They use their enlarged lips to siphon prey out the sand, filtering the sand through the gills. Crabs, shrimp and mollusks as well as free swimming small fish make up the majority of their prey.

The exact method of reproduction is not known. It is commonly thought that the males initiate the females to drop their eggs into the water table. Once this occurs the males then release sperm into the water, fertilizing the eggs. Spawning takes place in the warmer months of whichever location they are in. 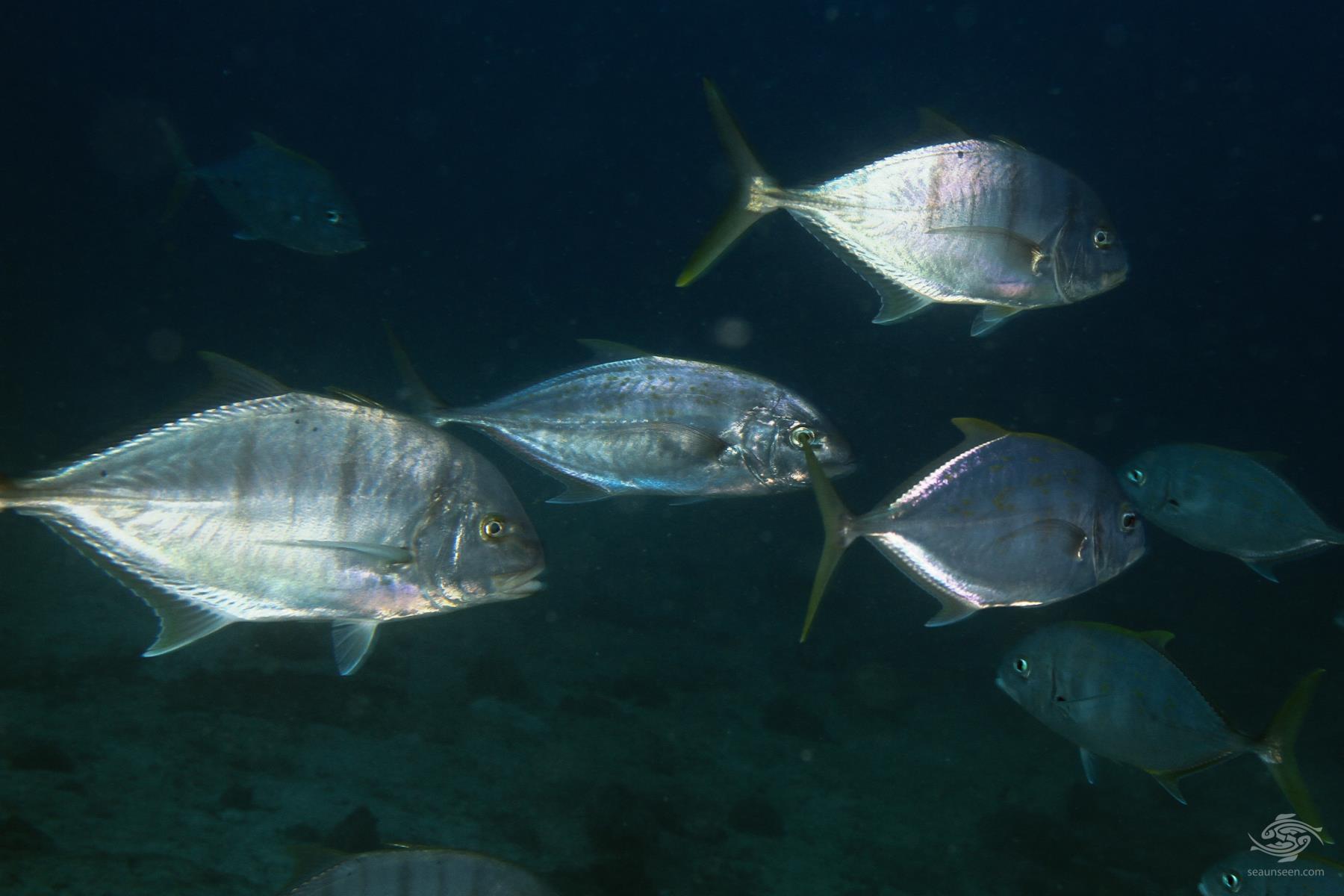 The golden trevally is exploited commercially. In many areas they are either near the level of maximum exploitation or are over fished. They are also fished as a game fish using lures and bait and put up a strong fight. The flesh is good eating and is a light pinky color which whitens when cooked.