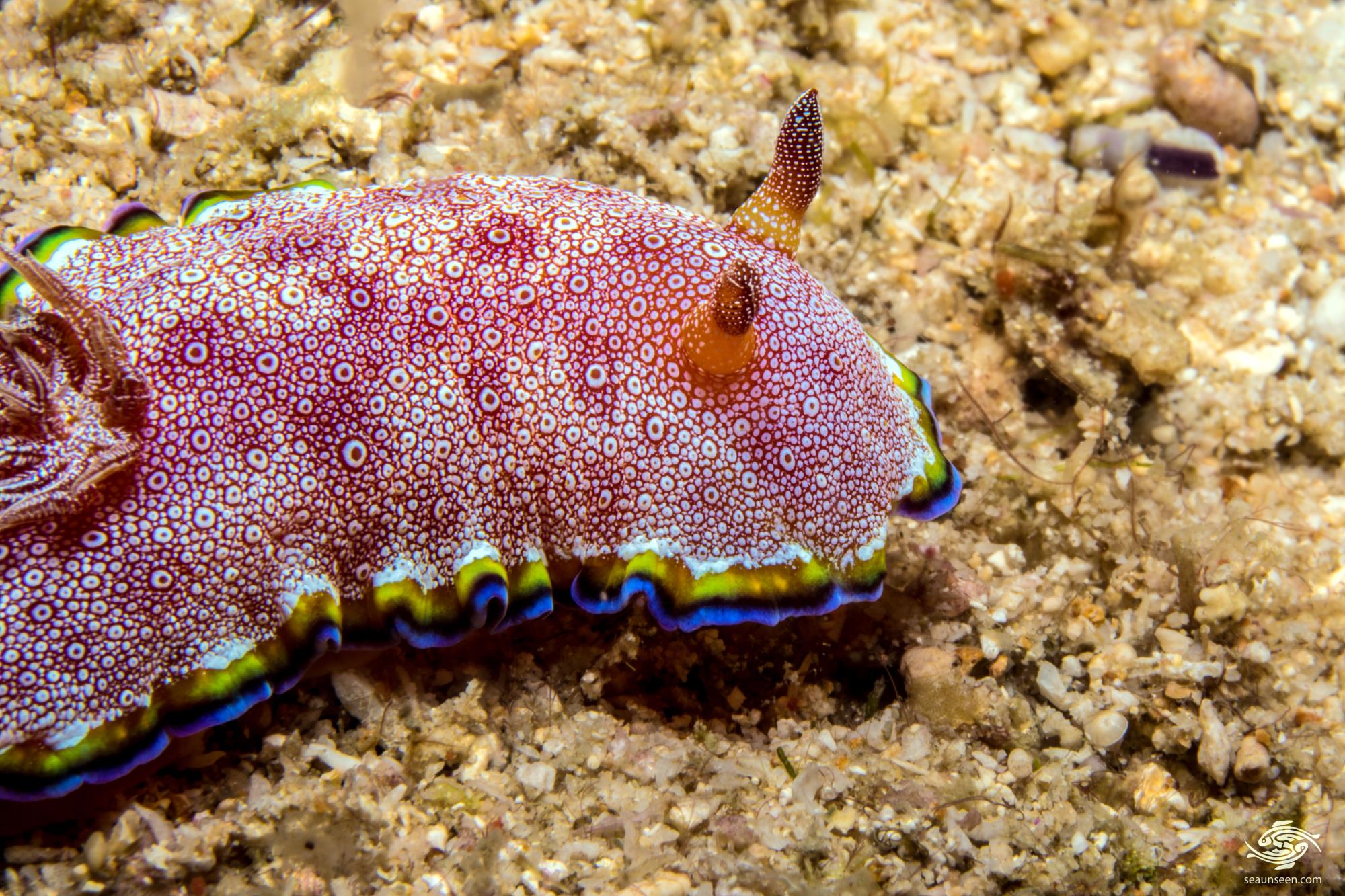 Goniobranchus albopunctatus is a colourful looking species of sea slug . They are dorid nudibranchs, marine gastropod mollusks. They were first described by Andrew Garret in 1879 from a specimen found in the Society Islands. He described them as rare and the description was from a single specimen.

In 1904 Elliot described a specimen found in Zanzibar and named it Chromodoris sykesi and the image he prepared certainly resembles the present day version in the images aside from the lack of concentric rings.

The Goniobranchus family was first described by Pease in 1866 but was regarded as a synonym of Chromodoris until 2012 when it was brought back into being for a clade revealed by DNA research conducted in  2012 by Rebecca Fay Johnson and Terrence M. Gosliner who confirmed the listing as Goniobranchus albopunctatus.

Goniobranchus albopunctatus have an elongated oval shape. The upper body color we have seen is  red with numerous white dots with a red spot in the middle of the majority of the dots. The rhinophores are yellow at the base and red darkening towards the top. The base has rows of white dots on it and the rhinopores themselves are covered in white dots. The gills are red witha white line up the interior section and a large number of short white lines on them. The foot is yellow. The mantle is ringed with a blue line on the exterior followed by a  black line and then a slightly thicker yellow line. They seem to grow up to around 6 cm in length.

Goniobranchus albopunctatus are not that common in Tanzania. We have seen them on mixed rubble areas at 12 to 16 meters in depth. Despite their colorful looks they are remarkably well camouflaged in natural light and are not as visible as one might think they are, this a result of the water filtering out red light. 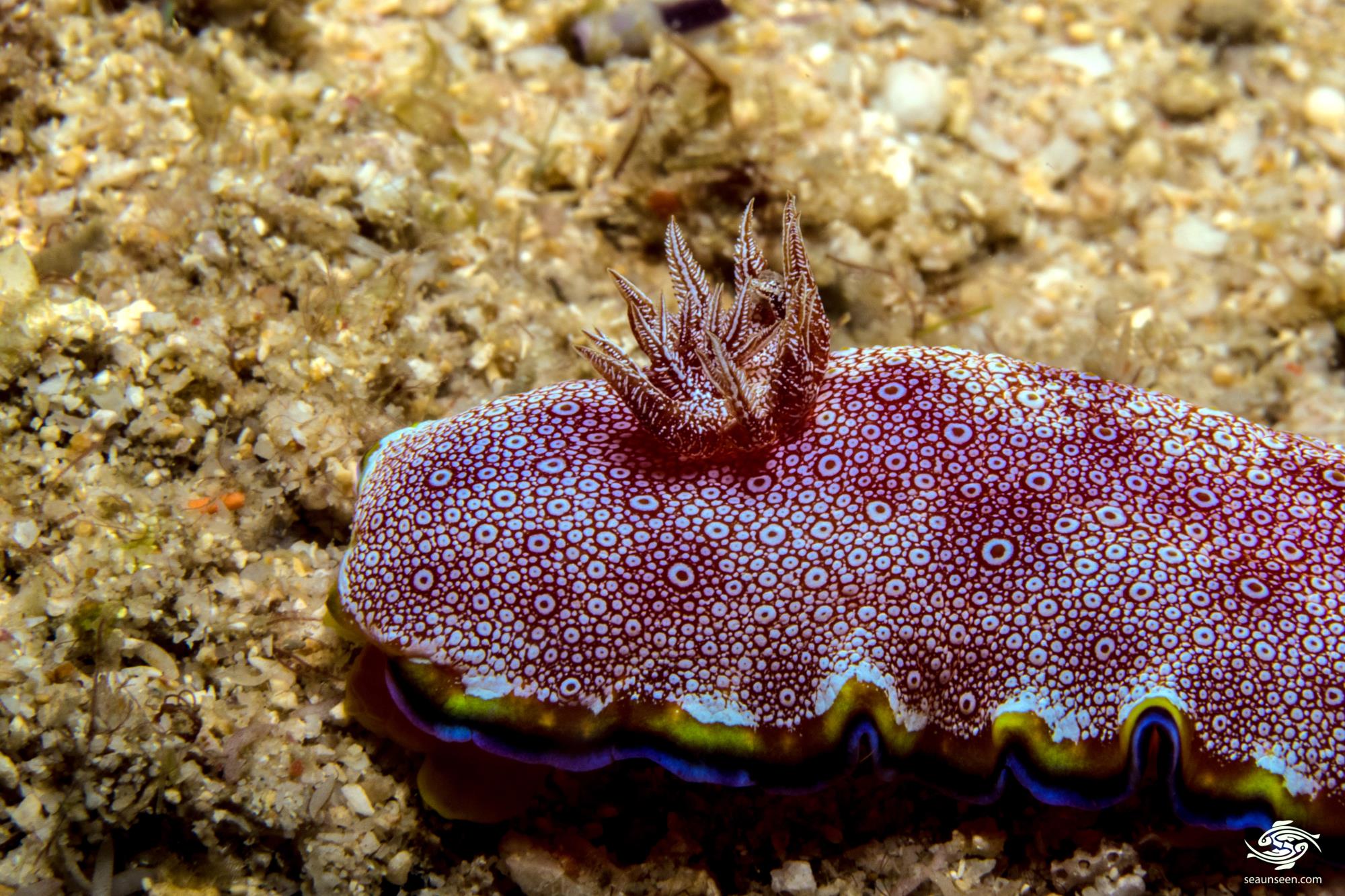 The Goniobranchus albopunctatus is found across the Indo  Pacific area from the East African coast to Hawaii. 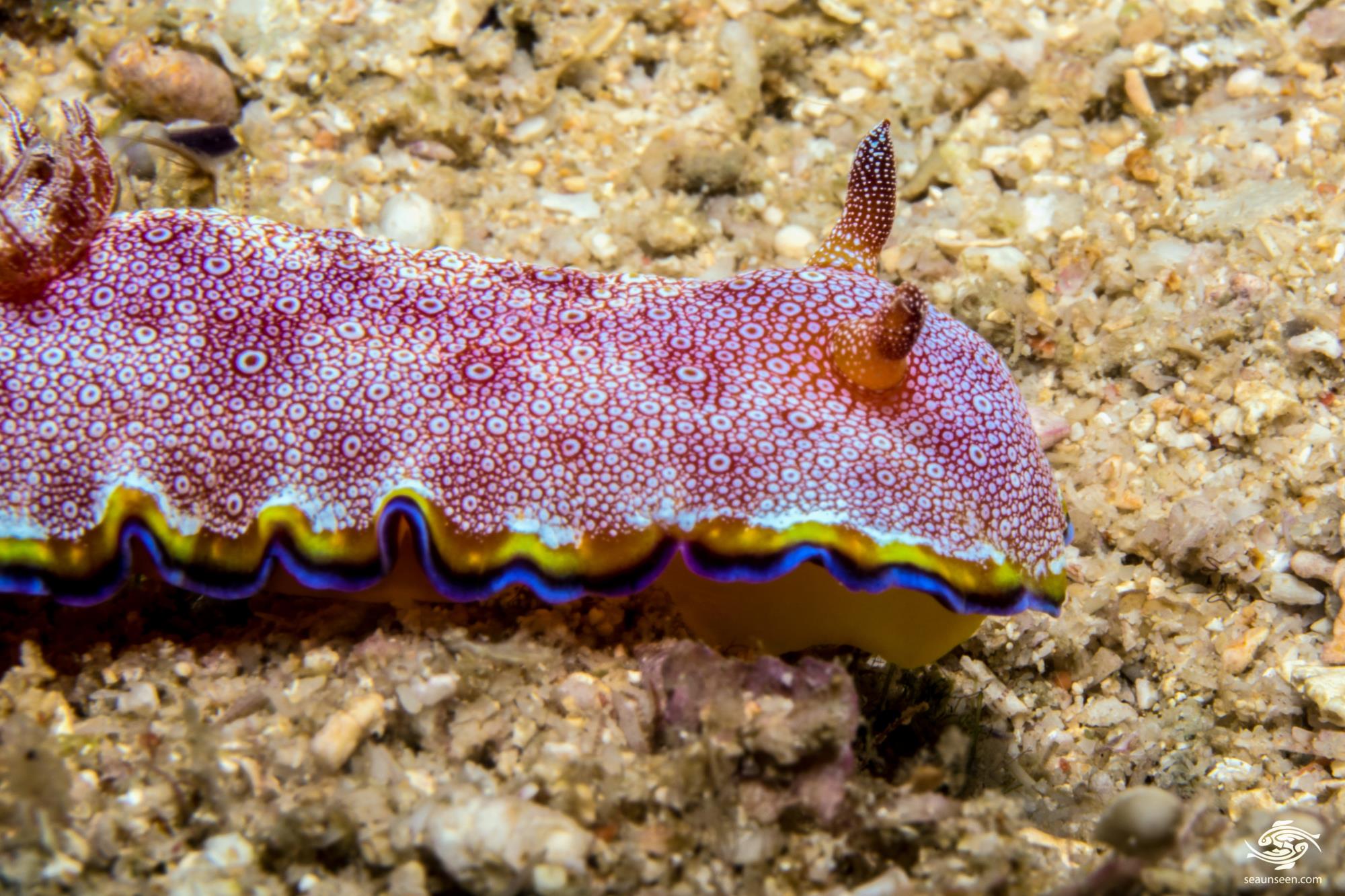 Members of the Goniobranchus family seem to feed on a variety of sponges and one assumes that G. albiopunctatus also feed on sponges. 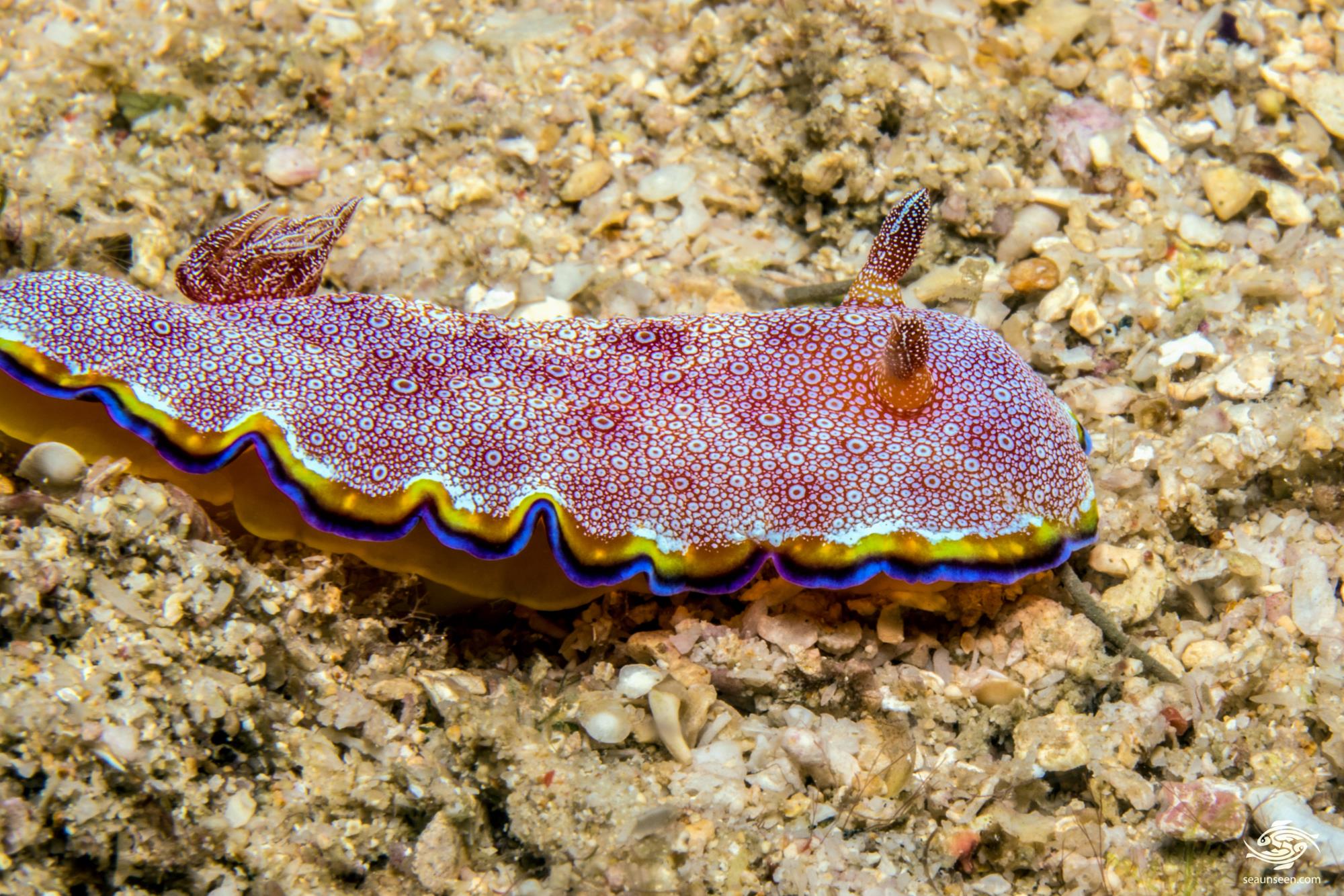 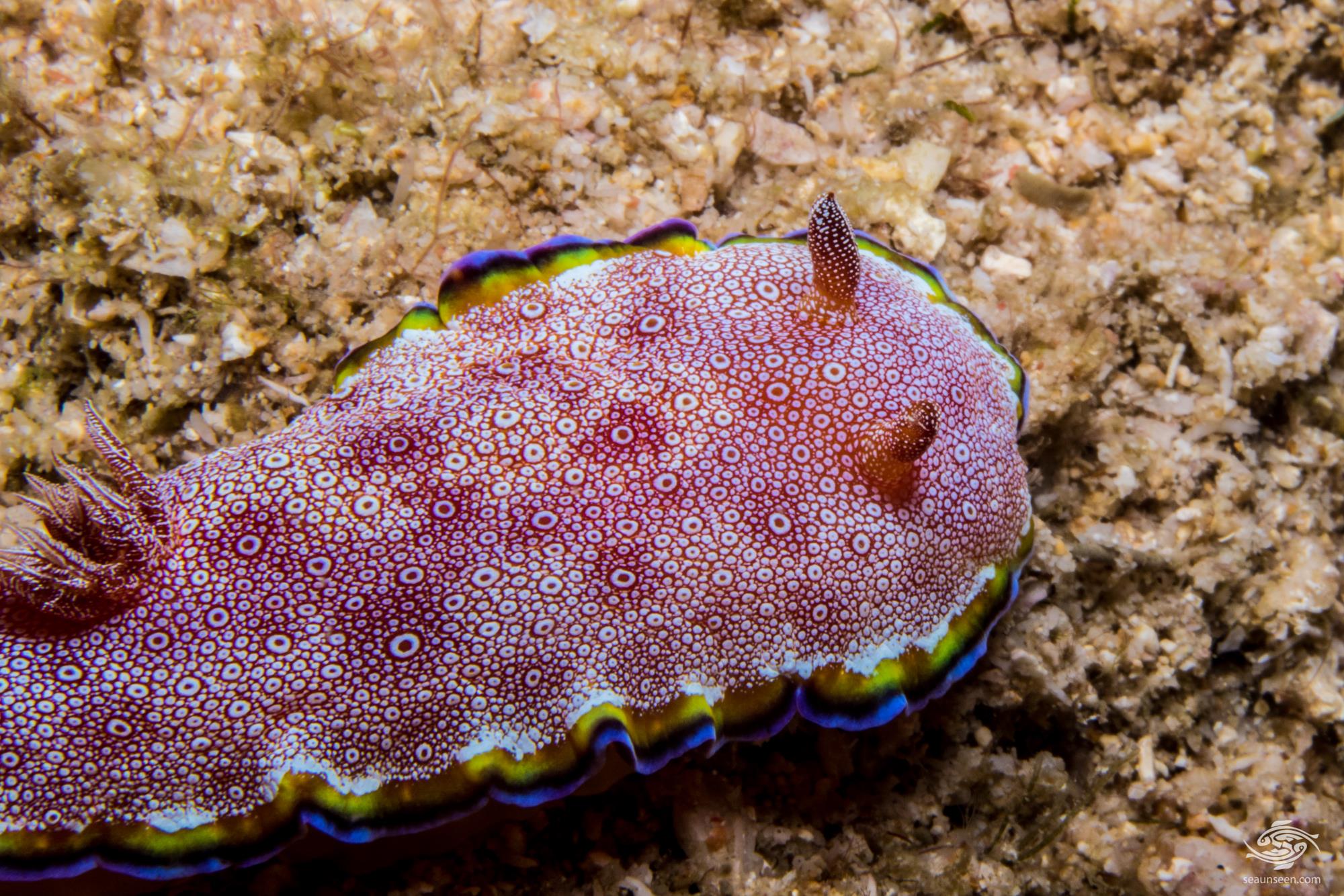