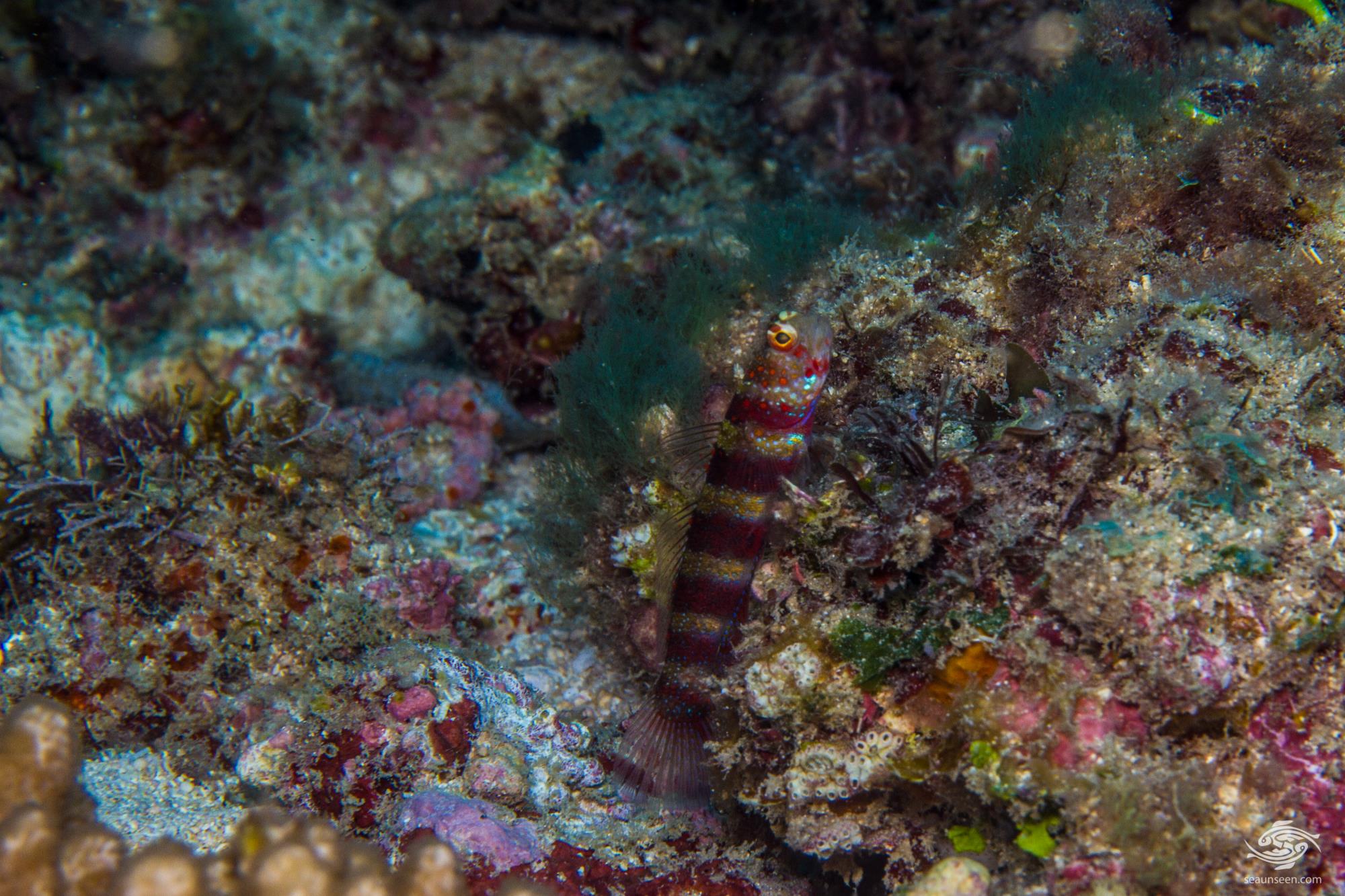 The Gorgeous Shrimp Goby (Amblyeleotris wheeleri) is also known as the Gorgeous Prawn-goby, the Barred Shrimp goby, the Burgundy Shrimp goby and Wheeler’s Shrimp-goby. They are fairly common on the Tanzanian coast. As their name implies they have a symbiotic relationship with species of alpheid shrimp and are usually found living in a burrow with Alpheus ochrostriatus.

The shrimp constructs a burrow in the sand and both parties live in the burrow. The goby acts as a guard for the shrimp which has poor eye sight. Both species gain protection and more from this mutualistic relationship making it a true symbiotic relationship.

The Gorgeous Shrimp Goby has a proportionally elongated body and proportionally large eyes on the top of their head giving them a good field of vision. The body colour is a light yellow colour with blue speckles on it and there are six maroon colored bars on the body. 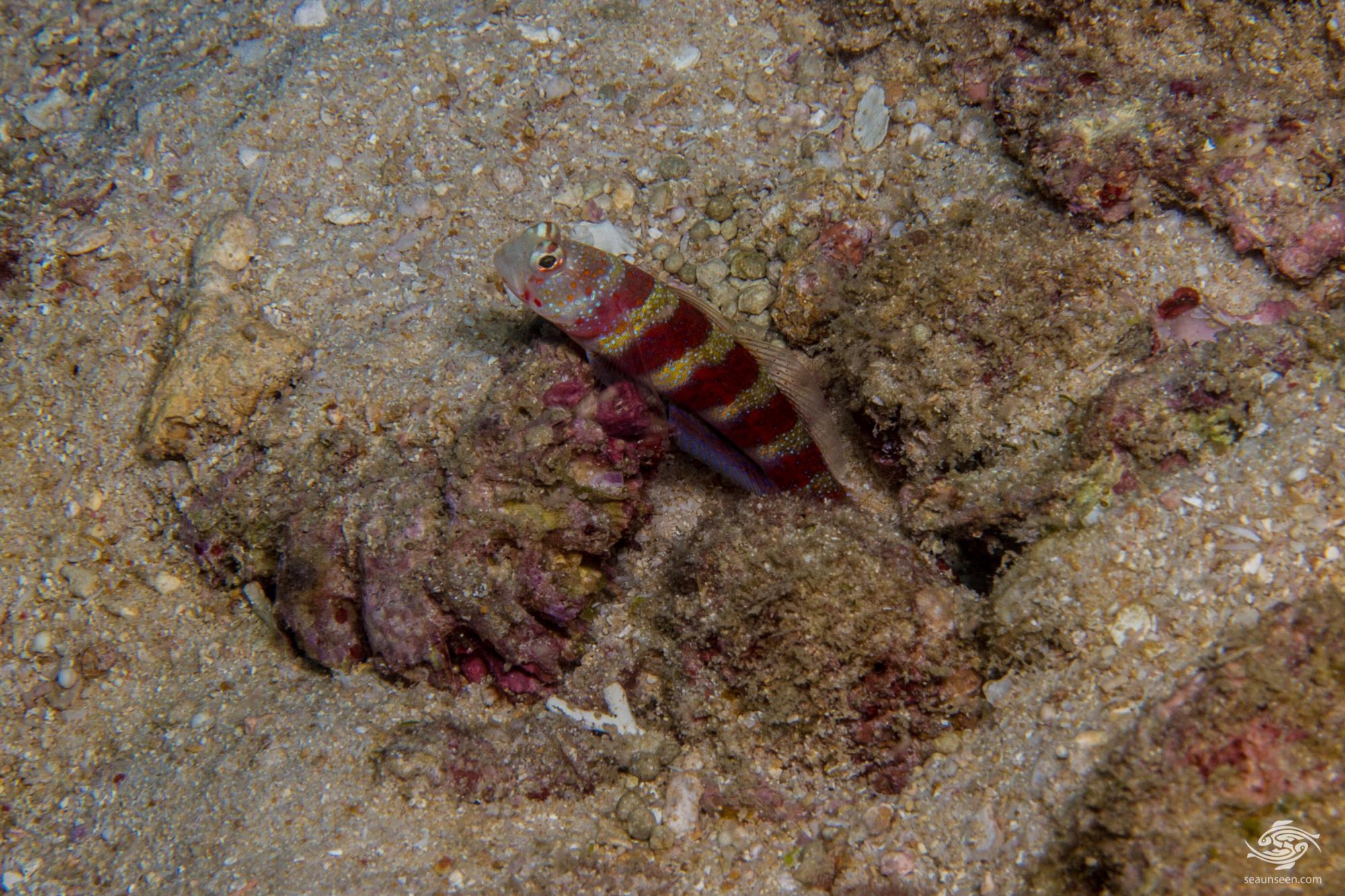 GORGEOUS SHRIMP GOBY IN THE WILD

There seems to be little literature done on this species of Gorgeous Shrimp Goby. In Tanzanian waters they are common in sandy and mixed rubble areas between the reef. They are shy fish and to view them one must approach them very slowly. Because of their attractive yellow coloration they are relatively easy to distinguish from the other shrimp gobies. They are usually seen part in the burrow with the tail being in the entrance of the burrow. Often there is a mound of sand at the burrow entrance and they perch on the mound to give themselves a better view.

The fish and the shrimp remain in physical contact with each other for most of the time, with the gobies tail almost constantly in touch with the shrimp. If one moves while the shrimp is out the burrow the goby gives its tail a fast flick and both shoot down the burrow at quite some speed. If one waits for long enough the goby will eventually stick its head out the burrow and when it feels safe will partially emerge again. 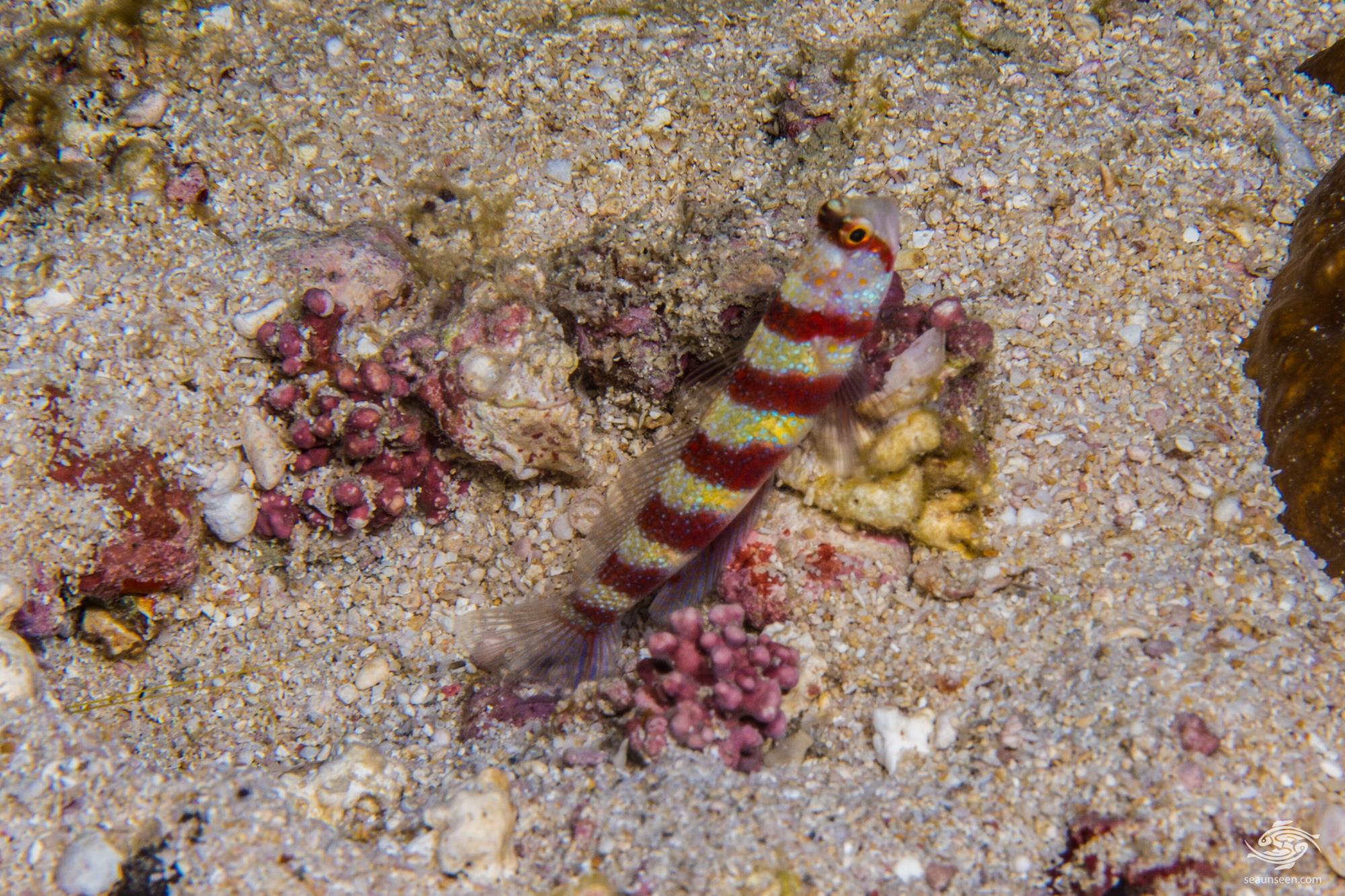 Shortly before darkness the goby and shrimp move into the burrow and the shrimp closes the hole, shoring it up with small stones and shells. Gorgeous Shrimp Goby usually emerge again an hour after sunrise. If the temperature is low and the sea conditions are bad they may remain in the burrow the whole day.

Not only does the shrimp keep the burrow clean , they also clean the goby keeping it free of parasites.

At times both the shrimp and the goby leave the burrow together to search for food staying in close contact with each other. The fish have also been observed taking food back to the burrow for the shrimp and the two species have a complex inter relationship which is mutually beneficial for both parties.  The burrows have been found to be up to two feet long, having numerous branches and chambers. 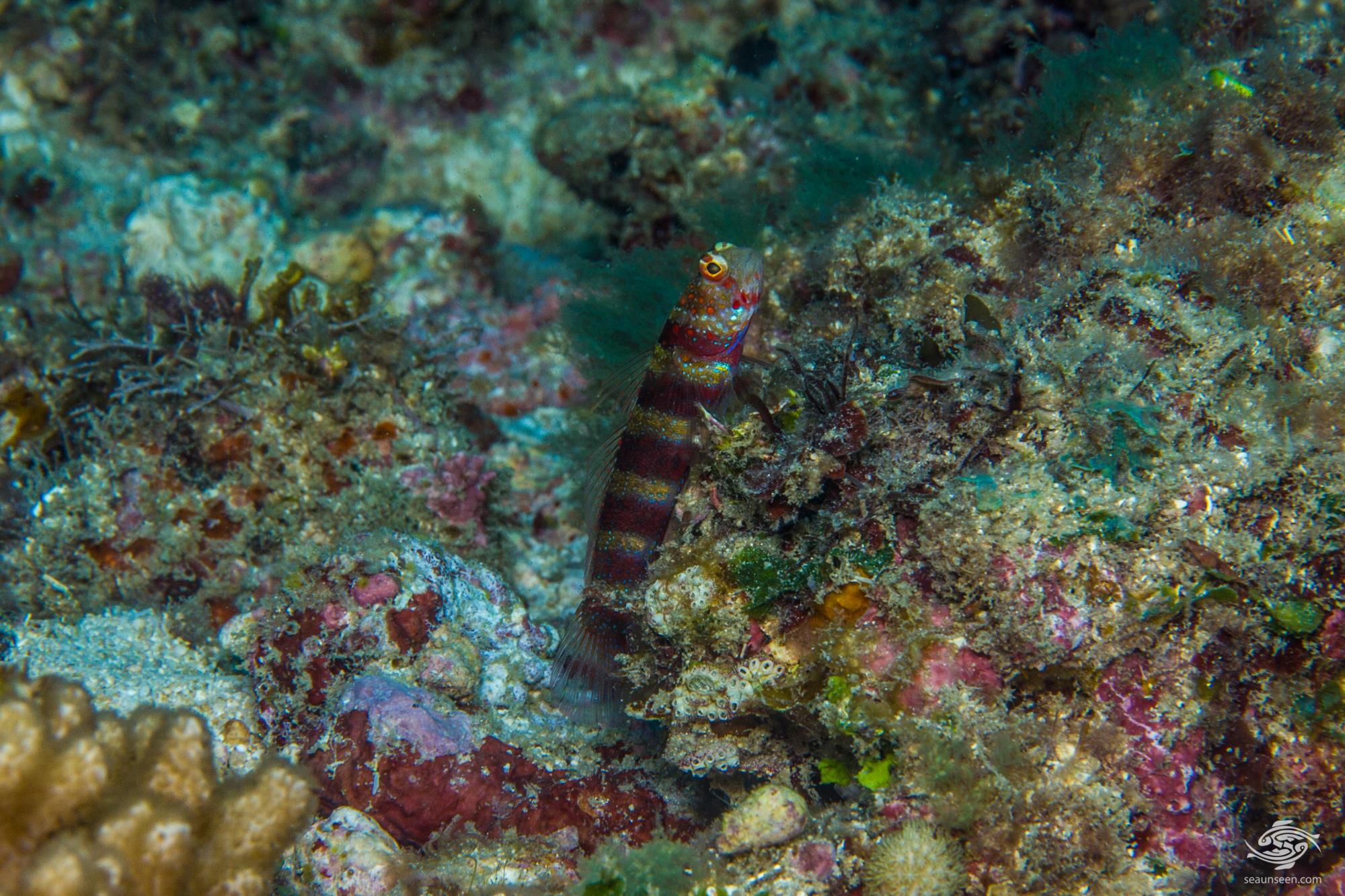 The Gorgeous Shrimp Goby is found across the Indo west Pacific area from East Africa to Southern Japan, south to the Great Barrier Reef. 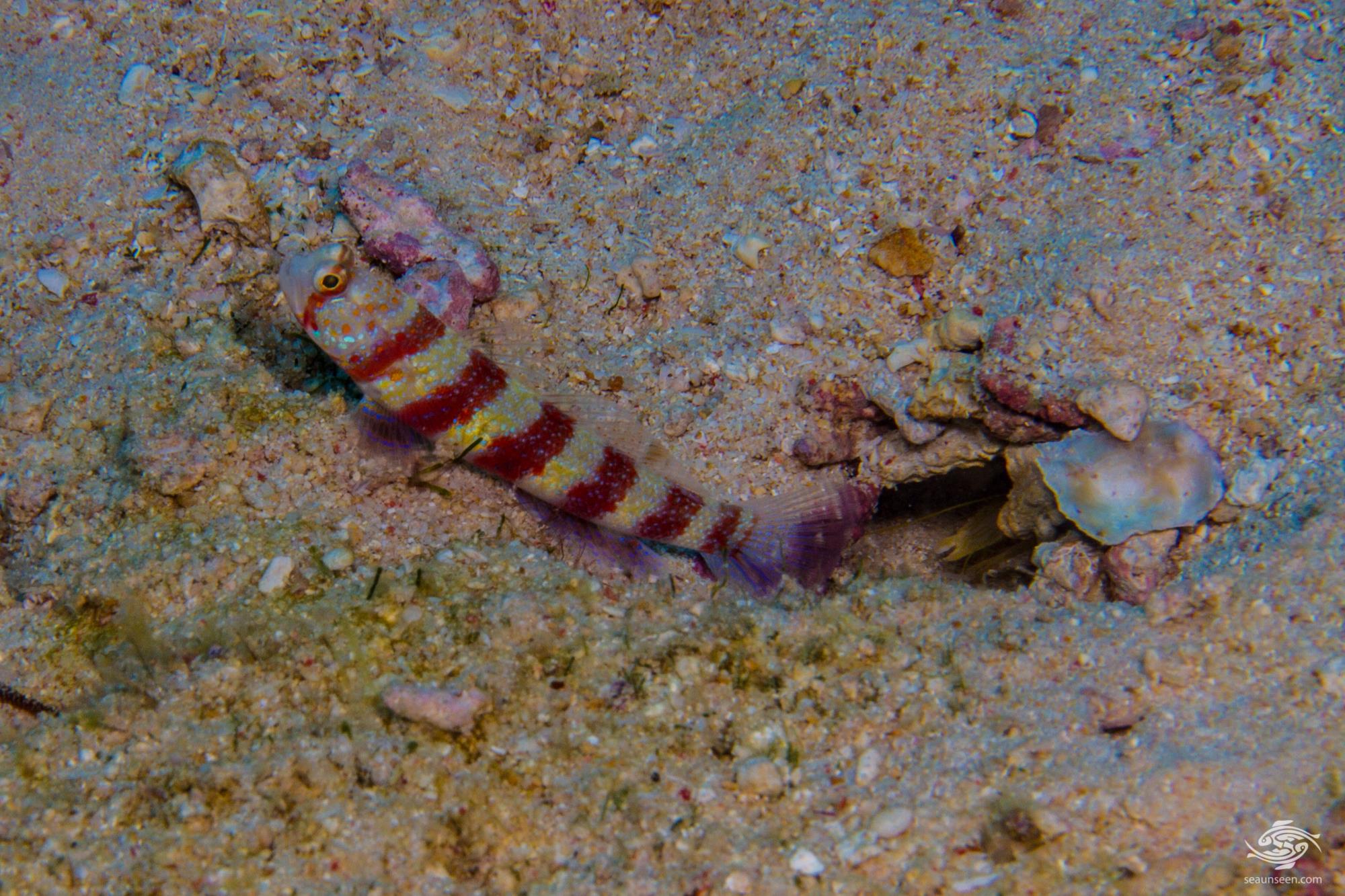 The Gorgeous Shrimp Goby feed on small benthic organisms in the sand.  Sand is also picked up in the mouth and filtered. 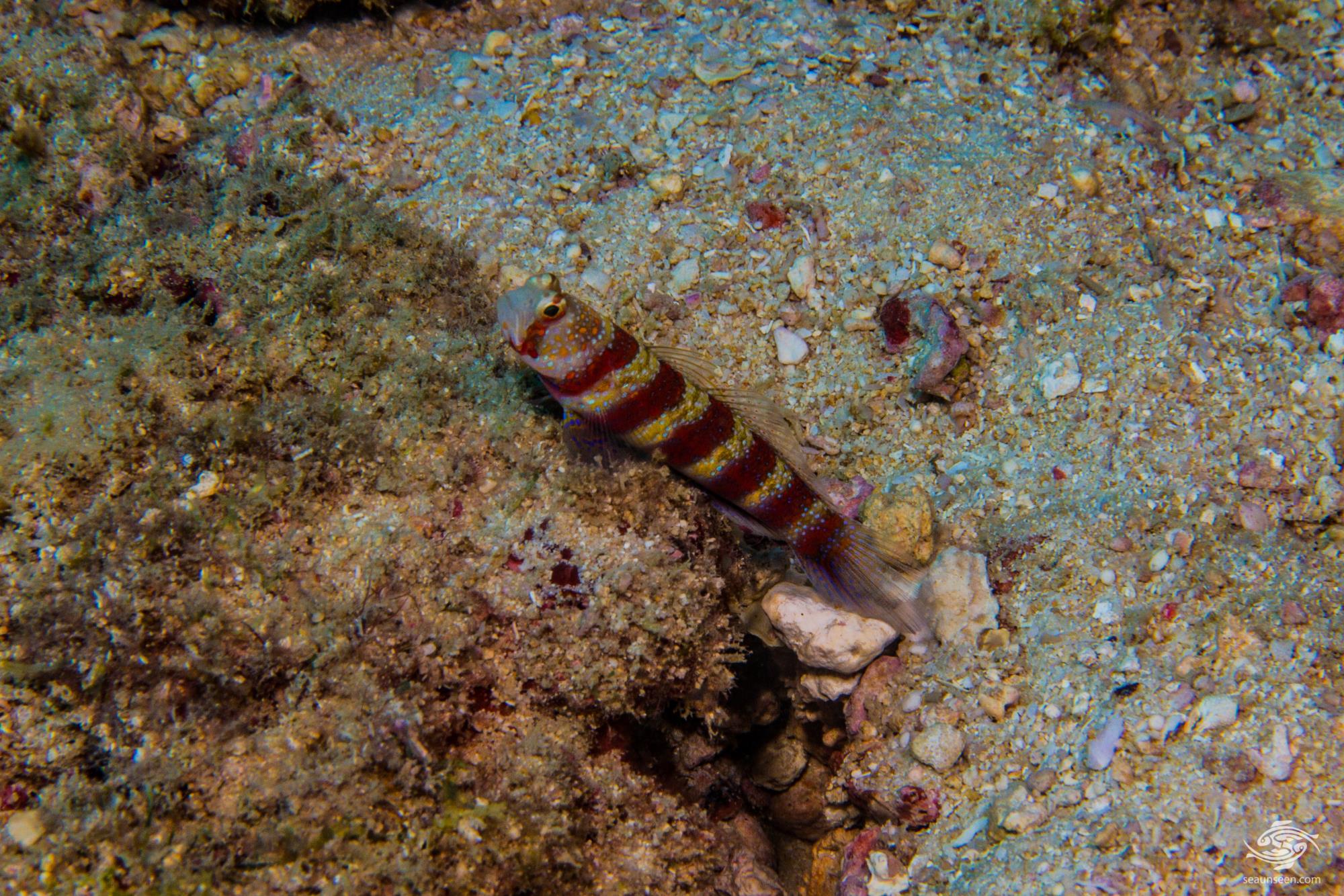 Mating takes place in a side corridor off the main burrow and the eggs are guarded in the side burrow by the male who cares for them for four to seven days. Up to 20000 eggs are laid at a time.   The eggs hatch at night and the larvae exit the burrow, becoming planktonic. The Gorgeous Shrimp Goby is classified as a cryptobenthic species. In short these species live in micro environments and feed on microscopic foods.  They grow very rapidly and breed rapidly and tend to have short life spans. 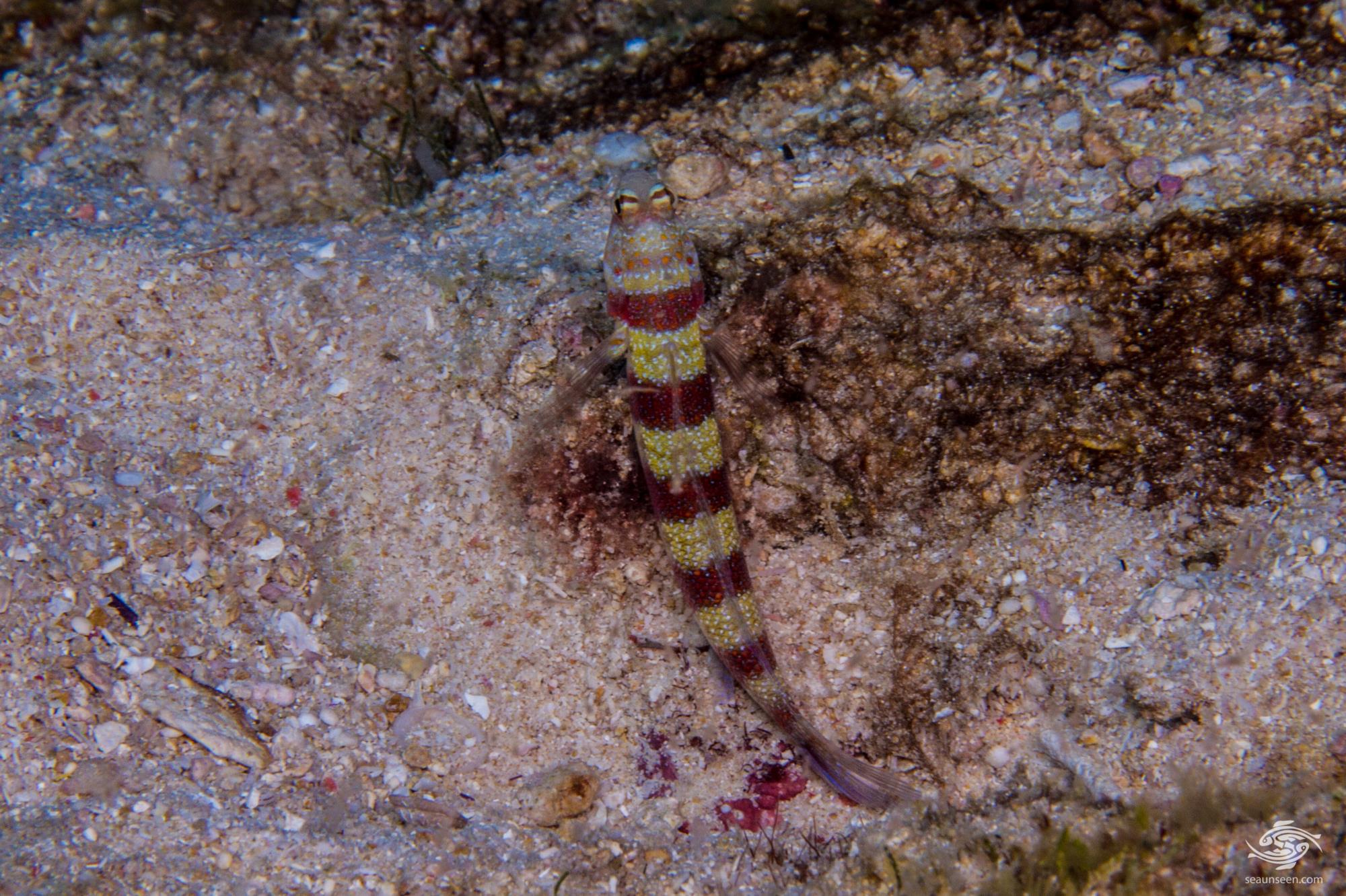