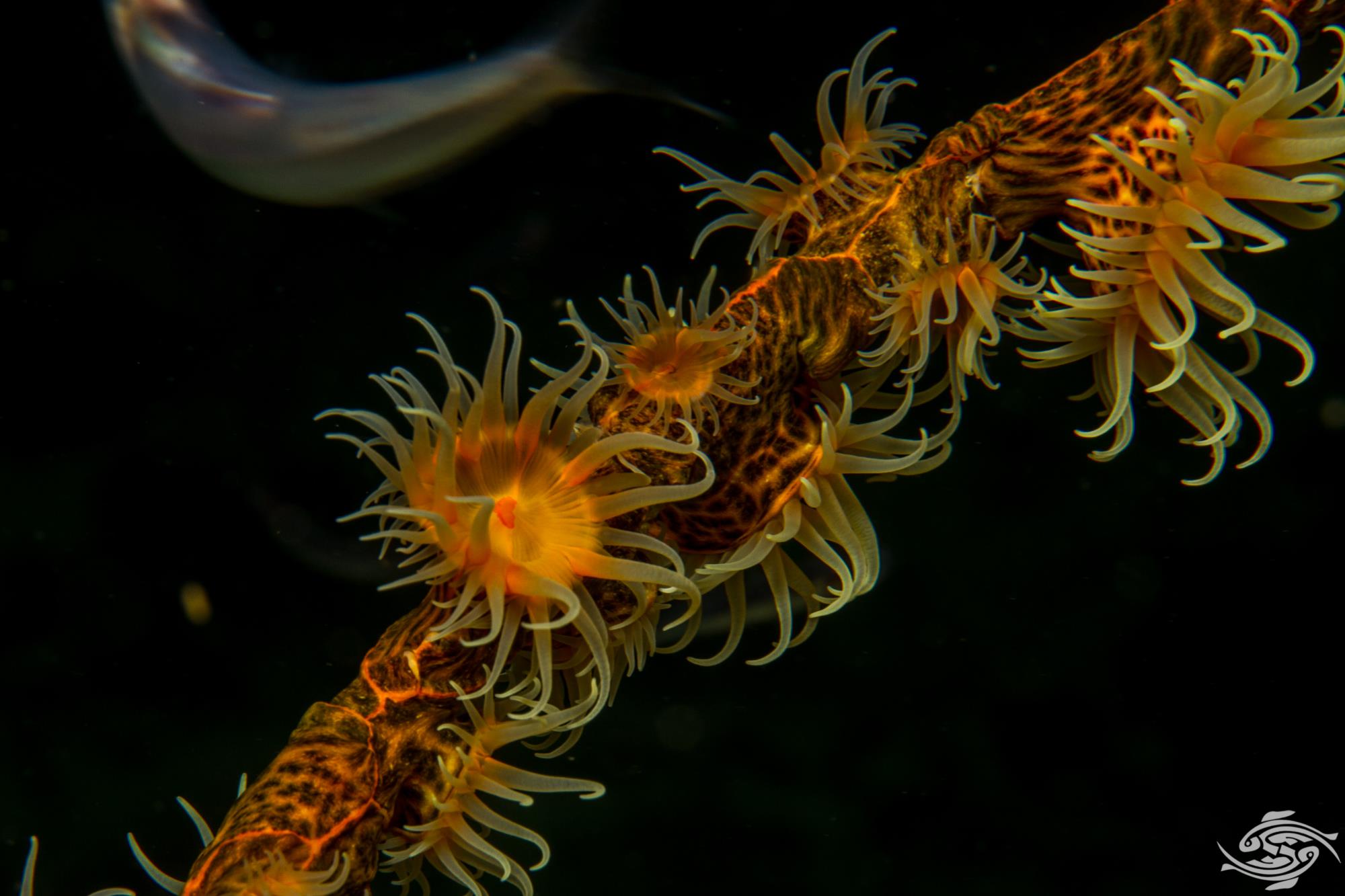 The Gorgonian wrapper (Nemanthus species) is also known as the Tiger Anemone. They are a species of communal anemones that are usually found wrapped around Gorgonian corals and Whip corals. Occasionally they are found on the top of coral bommies.

They usually envelop the entire coral thereby raising themselves in the water column and gain access to more nutrients. The species in this image was photographed in Tanzania and is found up the East coast of Africa down to South Africa. It was previously thought that further east across the Indian Ocean the species is replaced by Nemanthus annamensis which is not as colourful. However we have now found  Nemanthus annamensis in Tanzania waters in one location so the ranges overlap. 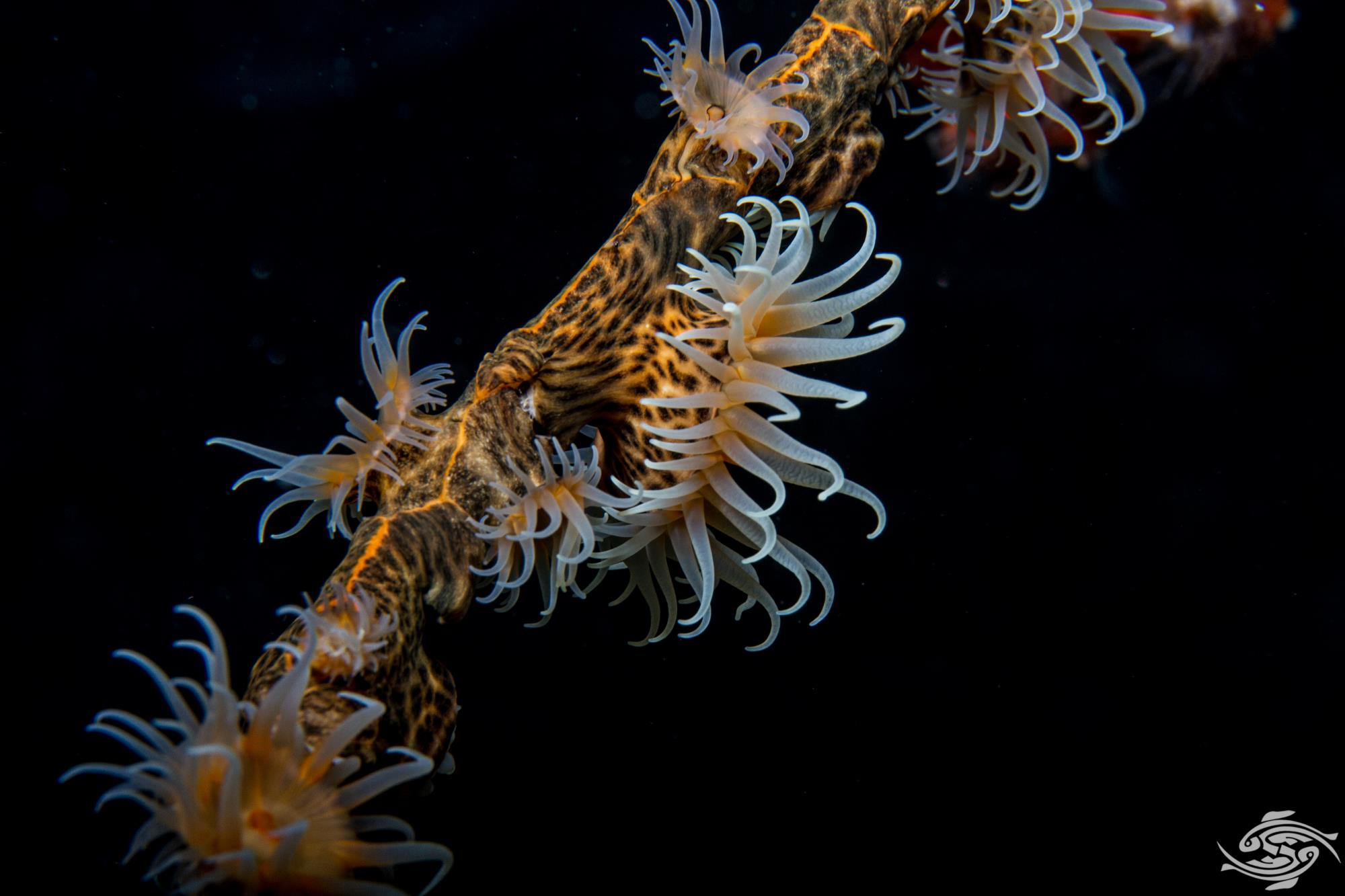 The base of the anemone is flexible and is usually wrapped right around the coral it is attached to. In the image below it appears as though the coral has died underneath the anemone. 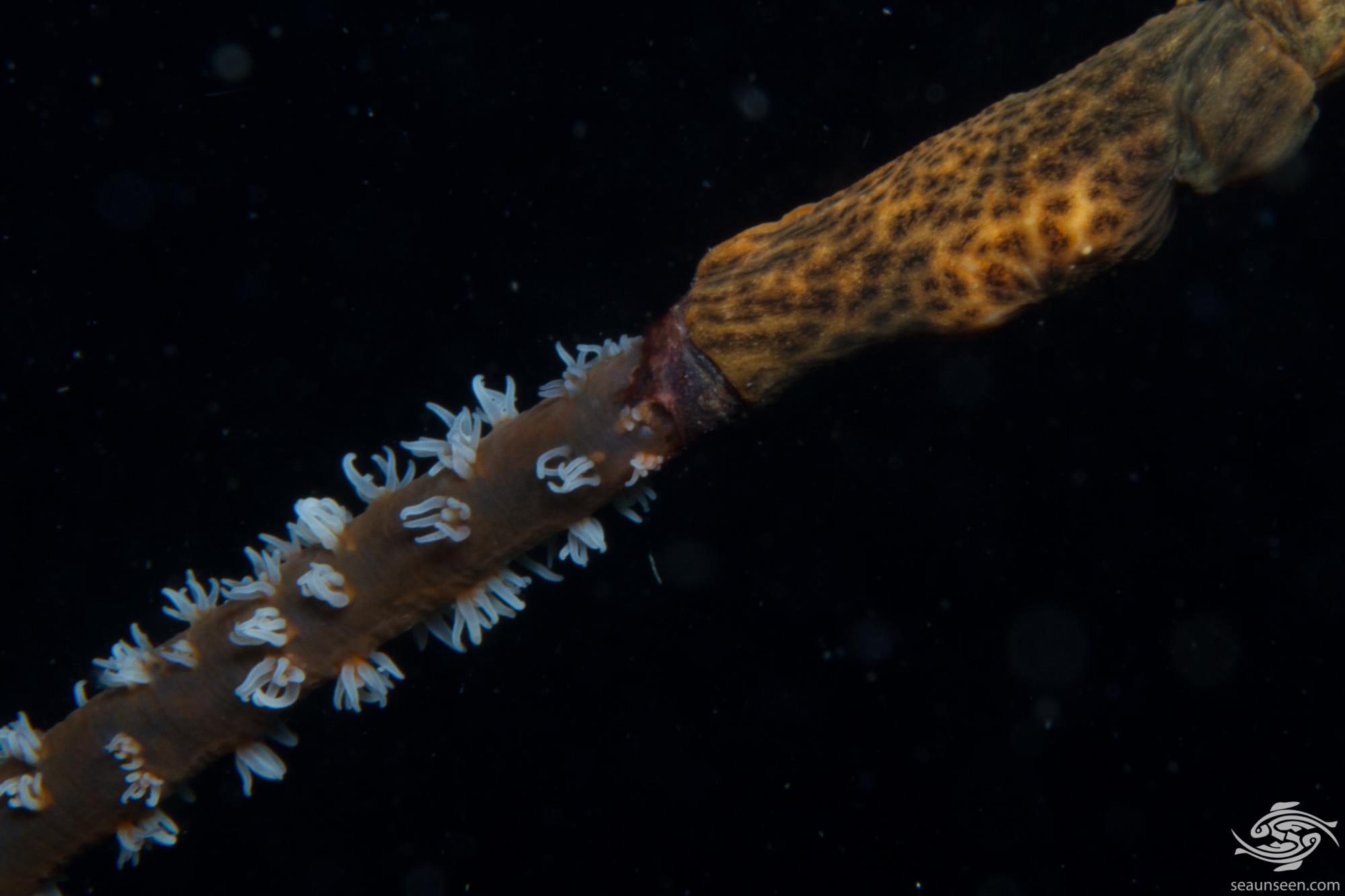 The base is a light orange colour with random black dots on it giving the anemone an attractive appearance. This is further added to by the white or orange tinted tentacles and when the anemone is opened up it is quite an attractive sight. There is considerable colour variance with the Nemanthus genus as can be seen below with an image of Nemanthus annamensis recently photographed in Tanzanian waters. 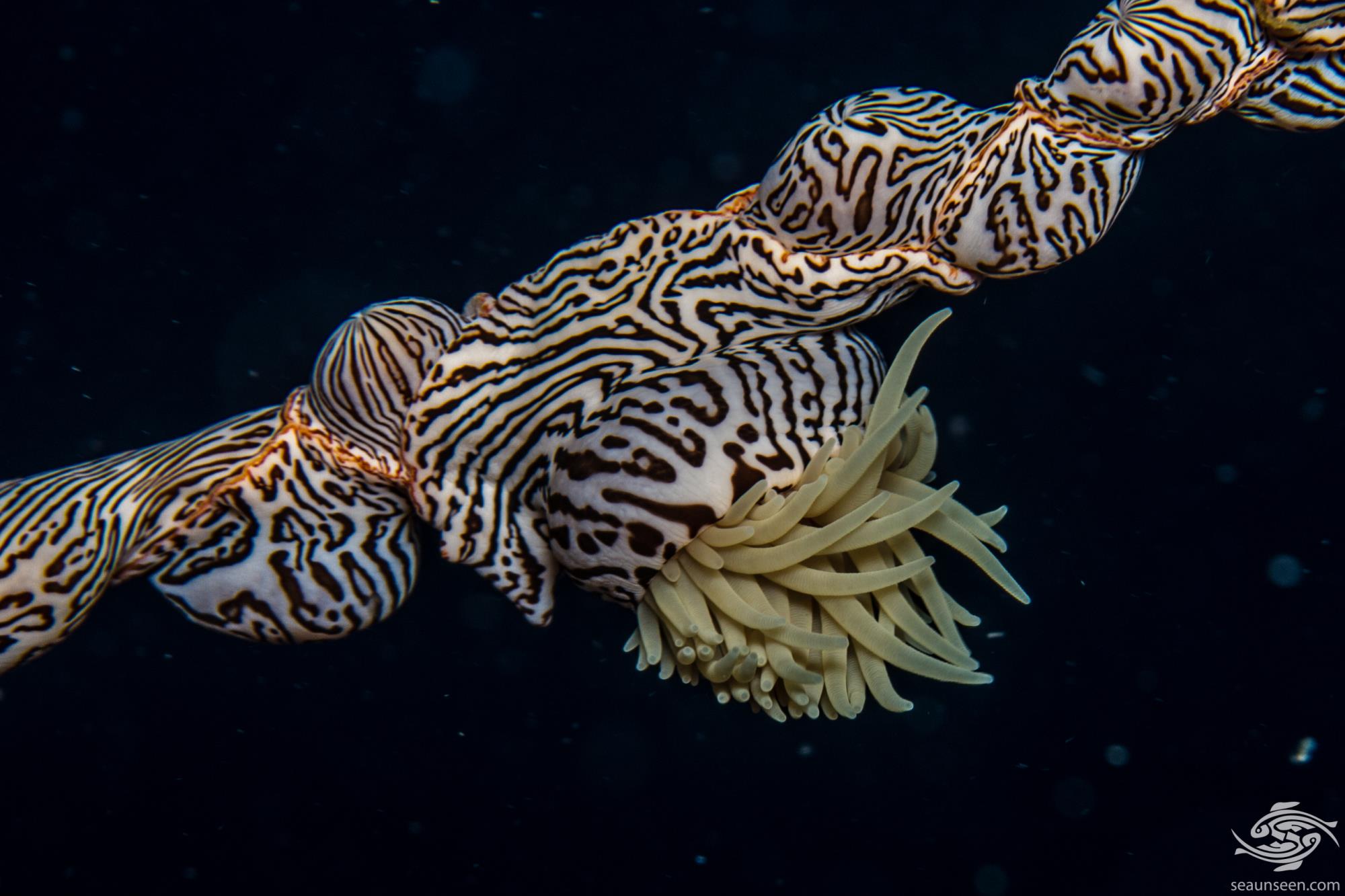 They usually only open fully at night and during the day the tentacles are semi withdrawn as in the images at the bottom of the post. The larger specimens in the images have a base that is approximately 6cm in width. 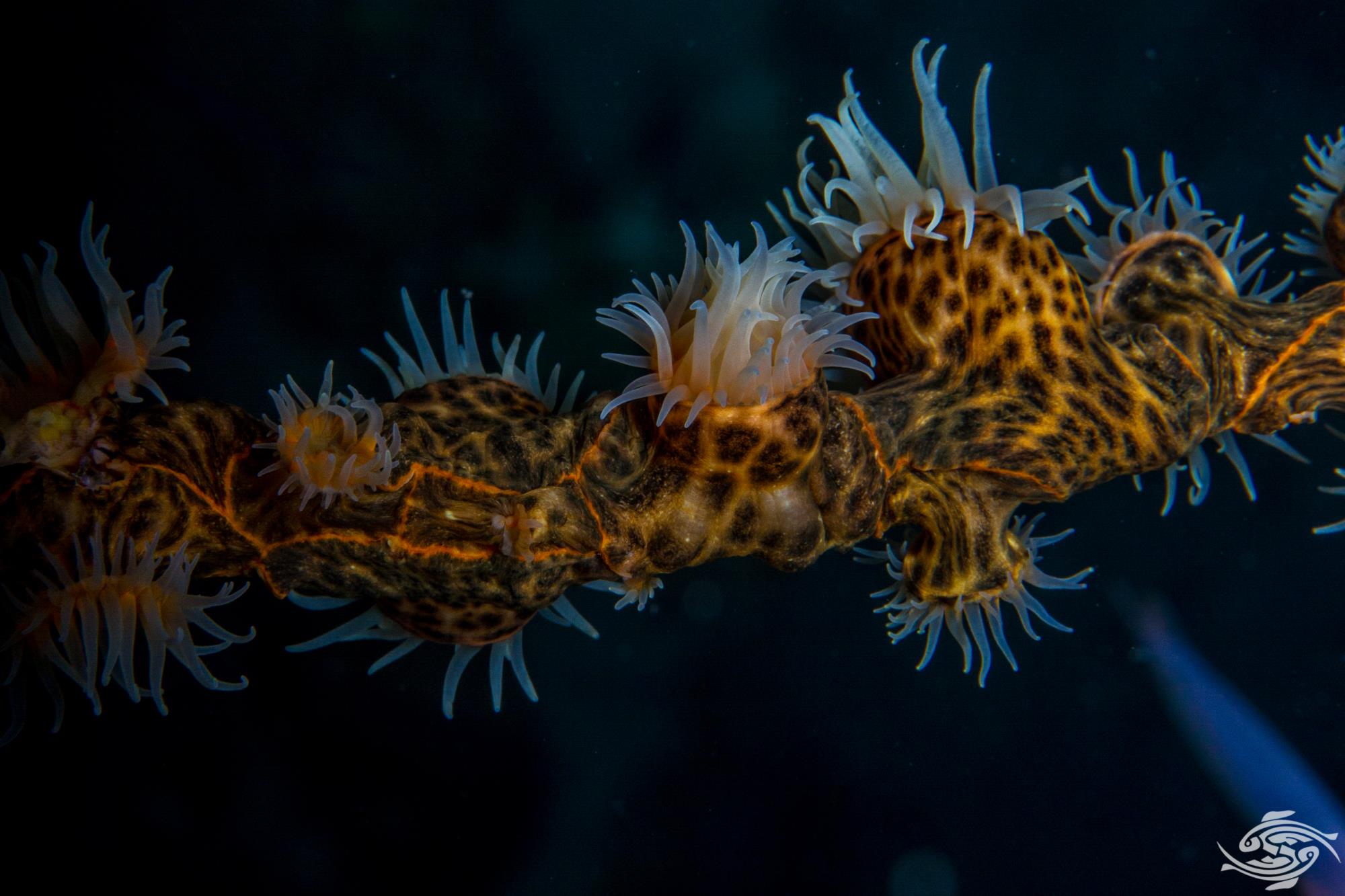 The Gorgonian wrappers are usually found on whip corals and Gorgonian corals in Tanzanian waters. Once they are on a coral they multiply and wrap themselves around the entire coral. It is not known with any certainty whether they kill the coral or whether they colonize the coral after it is dead. 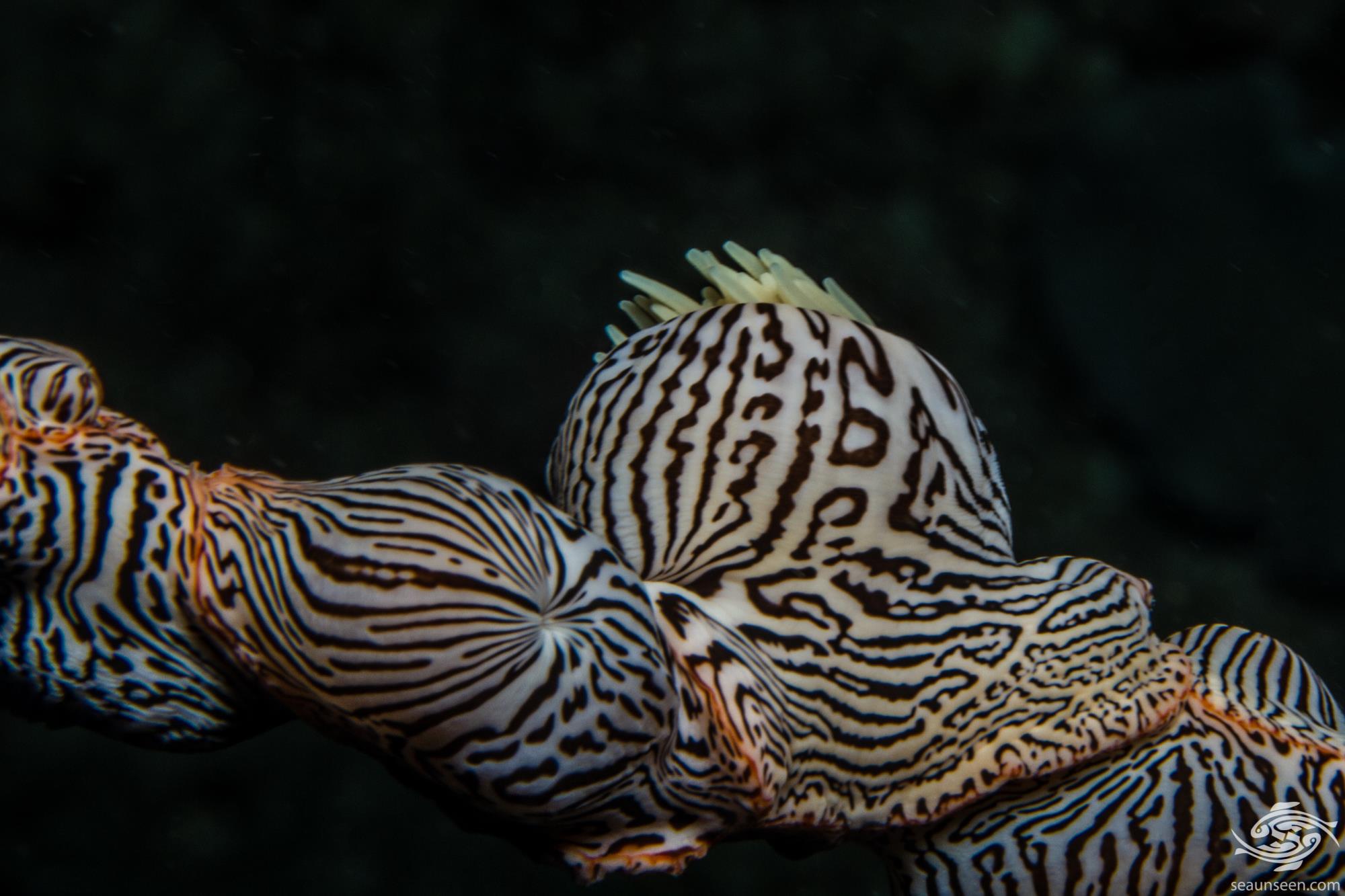 However from personal observation it seems as though they probably kill the coral to use its structure. The corals which they colonize are always located above the substrate where they obtain maximum water flow. In the image below an errant Gorgonian wrapper can be seen on the top of an otherwise healthy piece of coral. The polyps around the wrapper are dead and there is algae growing on the dead area. There is also an area of freshly dead polyps that appears further around the anemone.

The  Gorgonian wrapper has situated its self on the highest point of the coral which is sitting quite far above the substrate. 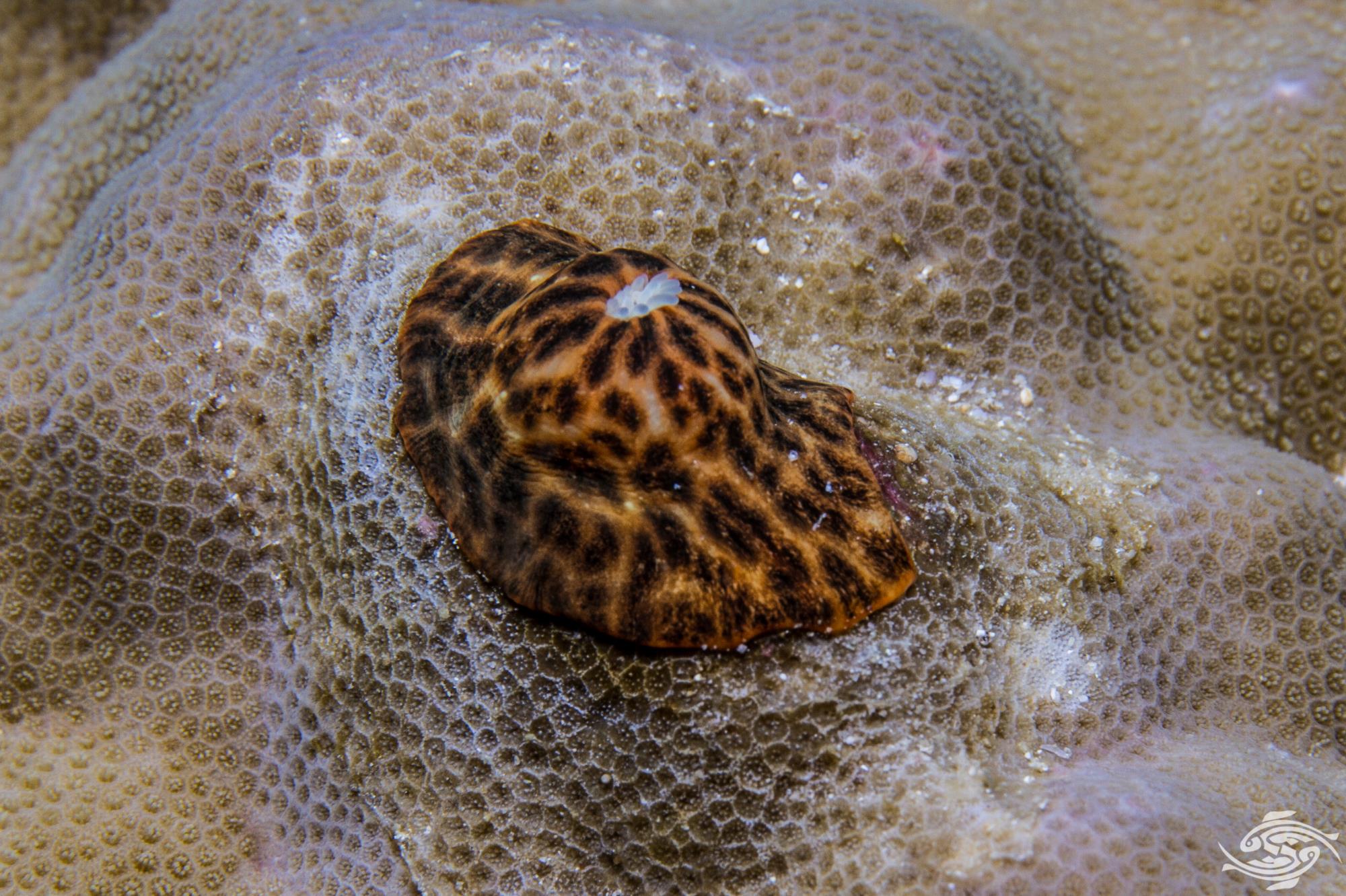 This species is found from northern South Africa to at least the Tanzanian coast, but probably further north into Kenya as well. We have only seen the Gorgonian Wrapper from 22 meters down. 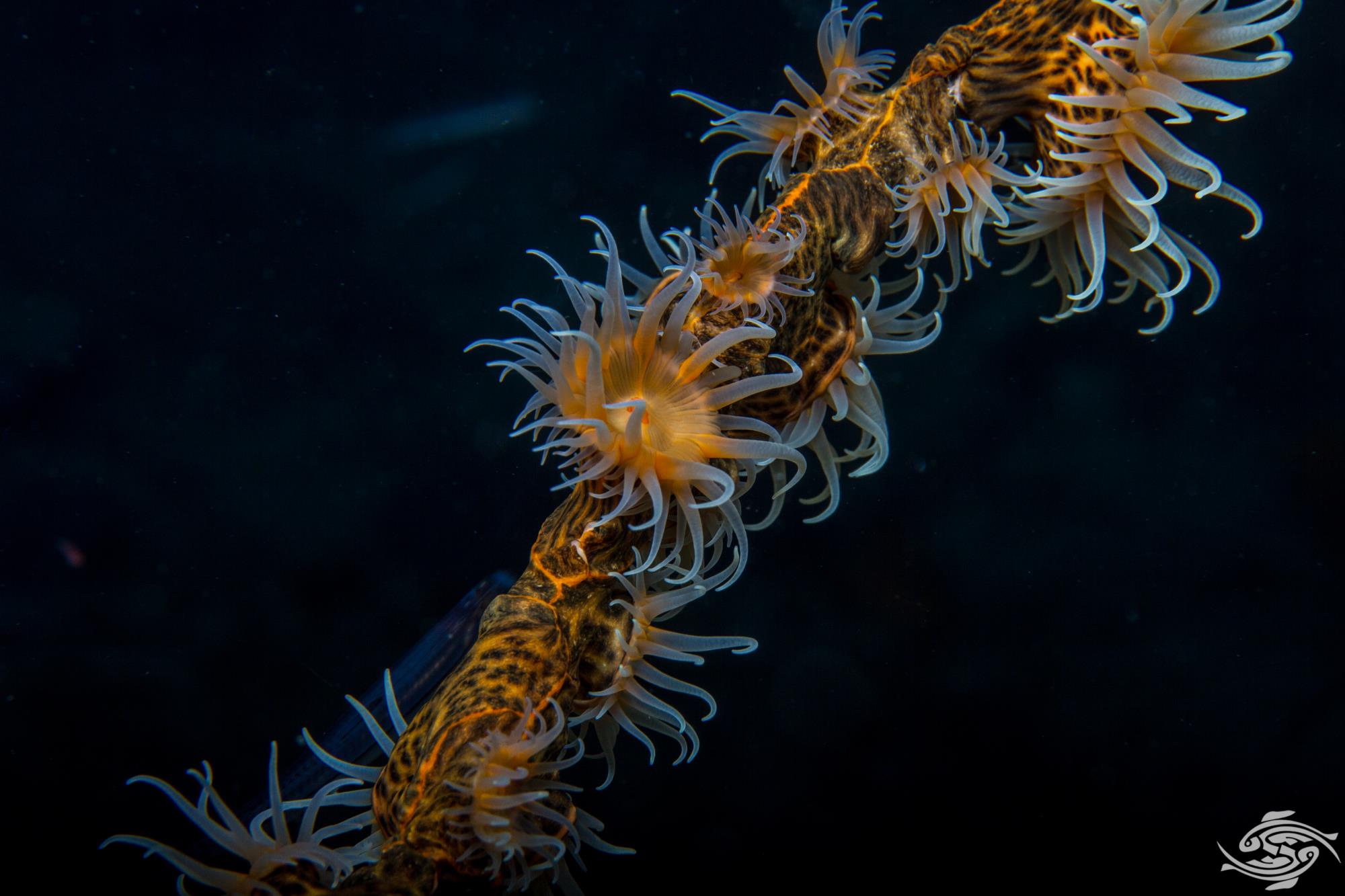 The tentacles  pull small particles out the water table and move them into the mouth. In all probability they will eat any planktonic matter they can. 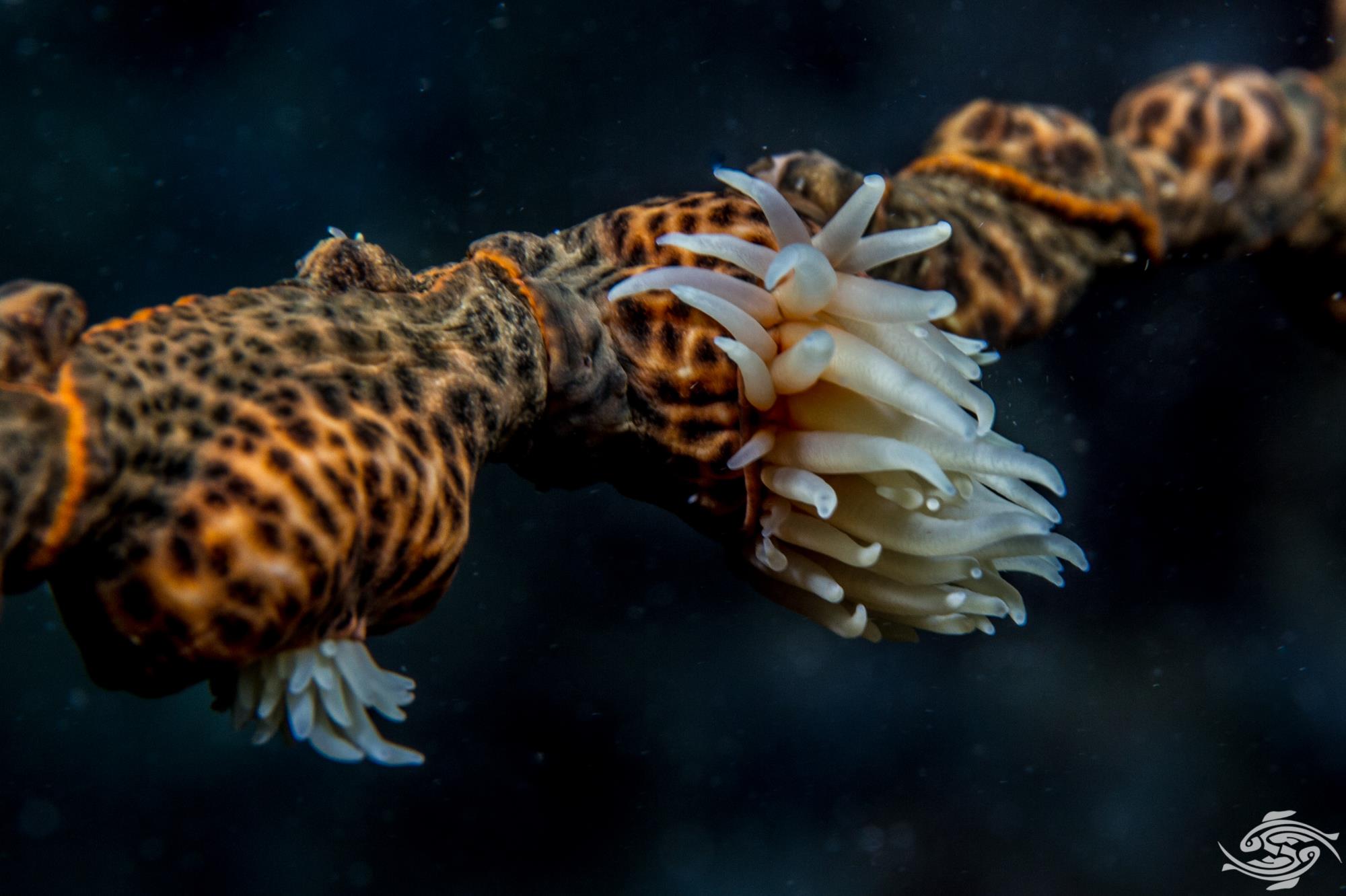 Very little if anything is known of their reproductive behavior. 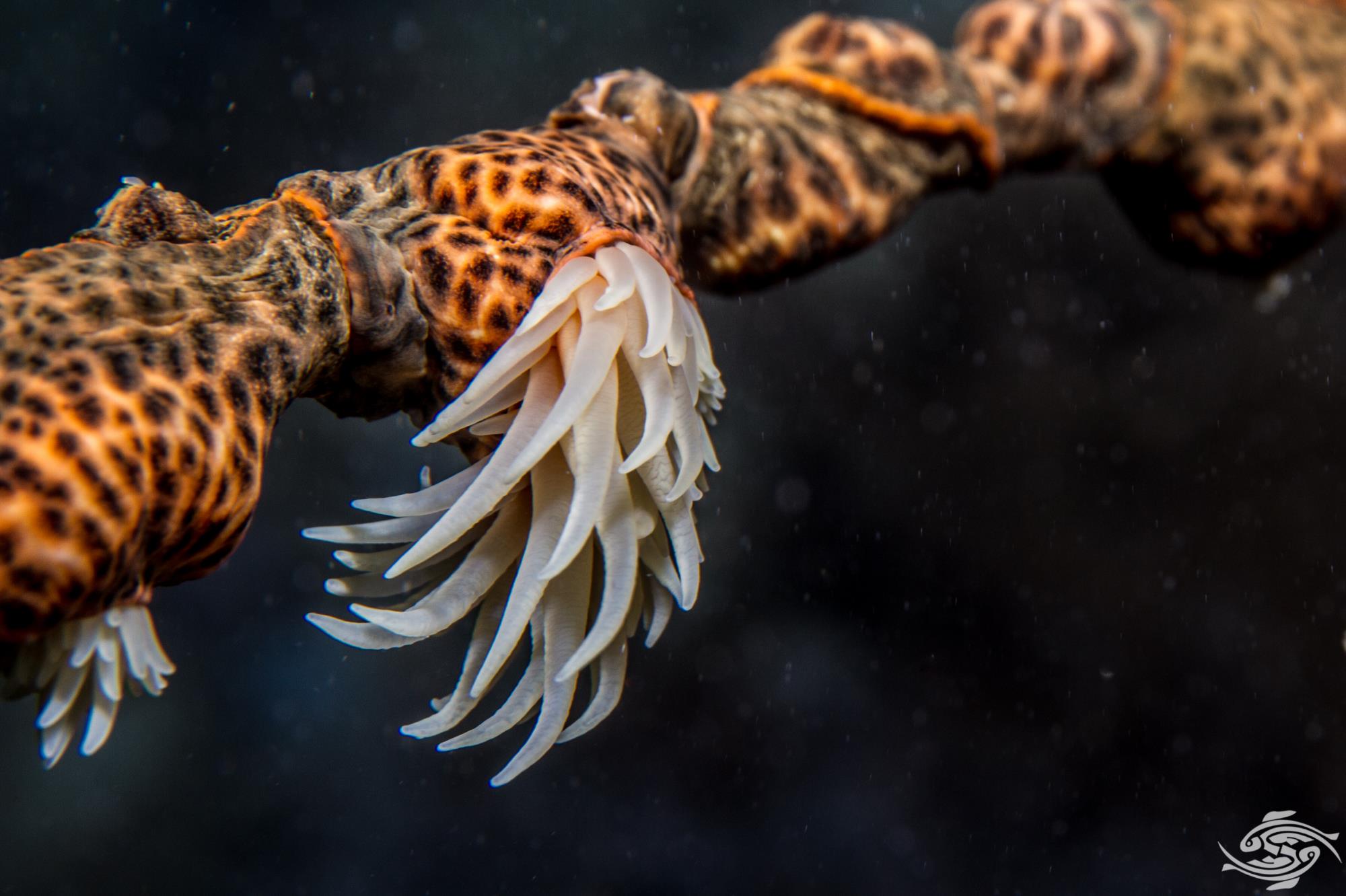 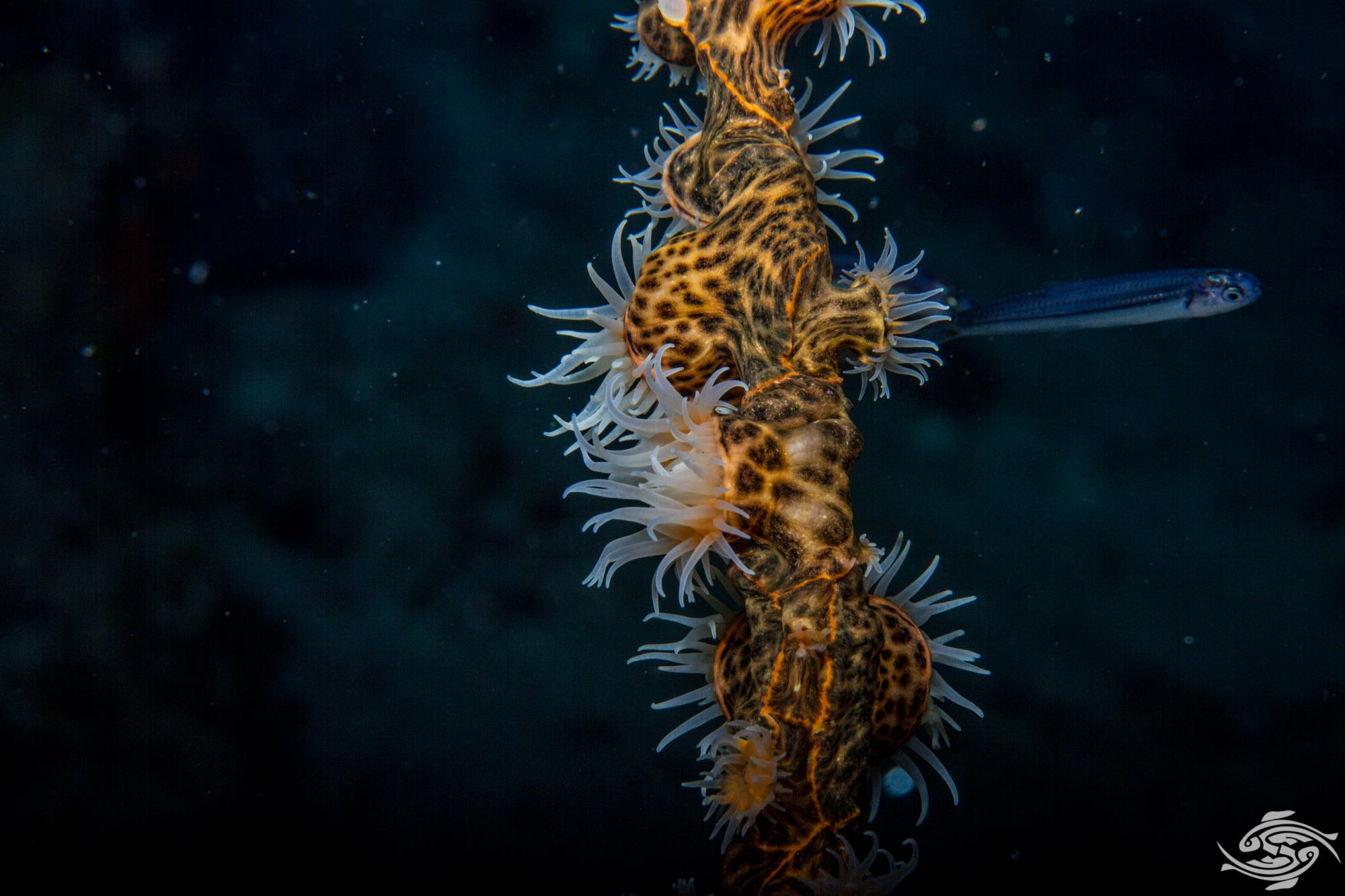