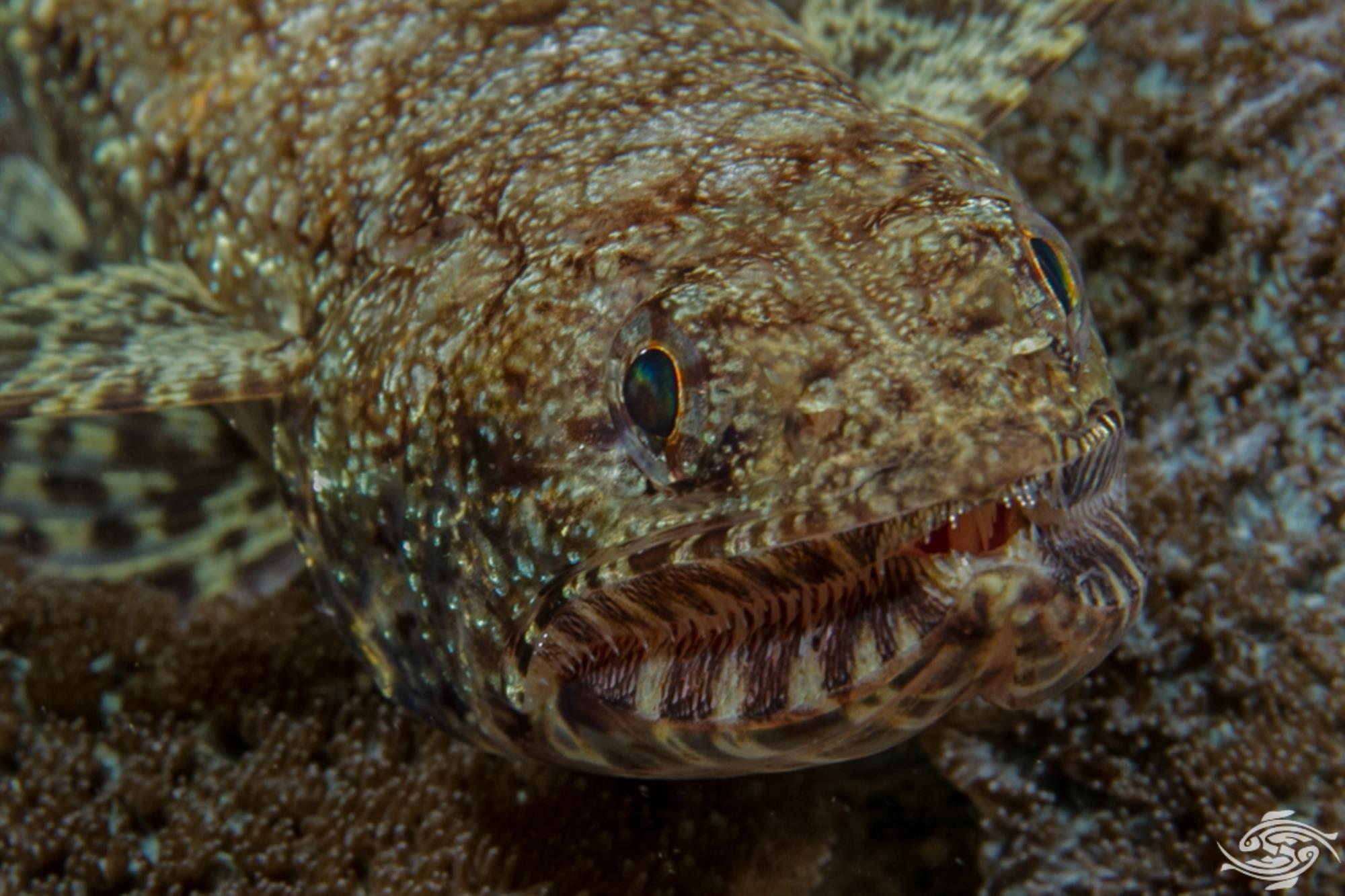 The Graceful Lizardfish (Saurida gracilis) also called the Blotchy Lizardfish. Close up they are easily distinguished from other Lizardfish by the shape of the mouth and the protruding teeth as seen in the image above. Lizardfish are so named because their long tapered body and head that resemble the body of a lizard.

The body of the Graceful Lizardfish is elongated and is ventrally compressed. They have proportionally short dorsal and antipose fins and the pectoral fin does not reach the pelvic fins.  The body colour varies considerably in Tanzania and varies from a mottled brown and white to a more yellowish brown mottled with white. Some specimens have darker bars on the body but this is not always the case.

They are remarkably well camouflaged. The mouth is proportionally large and is the widest part of the body. One distinguishing feature of this species of lizardfish is that the outer rows of teeth protrude out the side when the mouth is closed. They grow up to 32 cm in length and in Tanzanian waters are one of the larger Lizardfish. 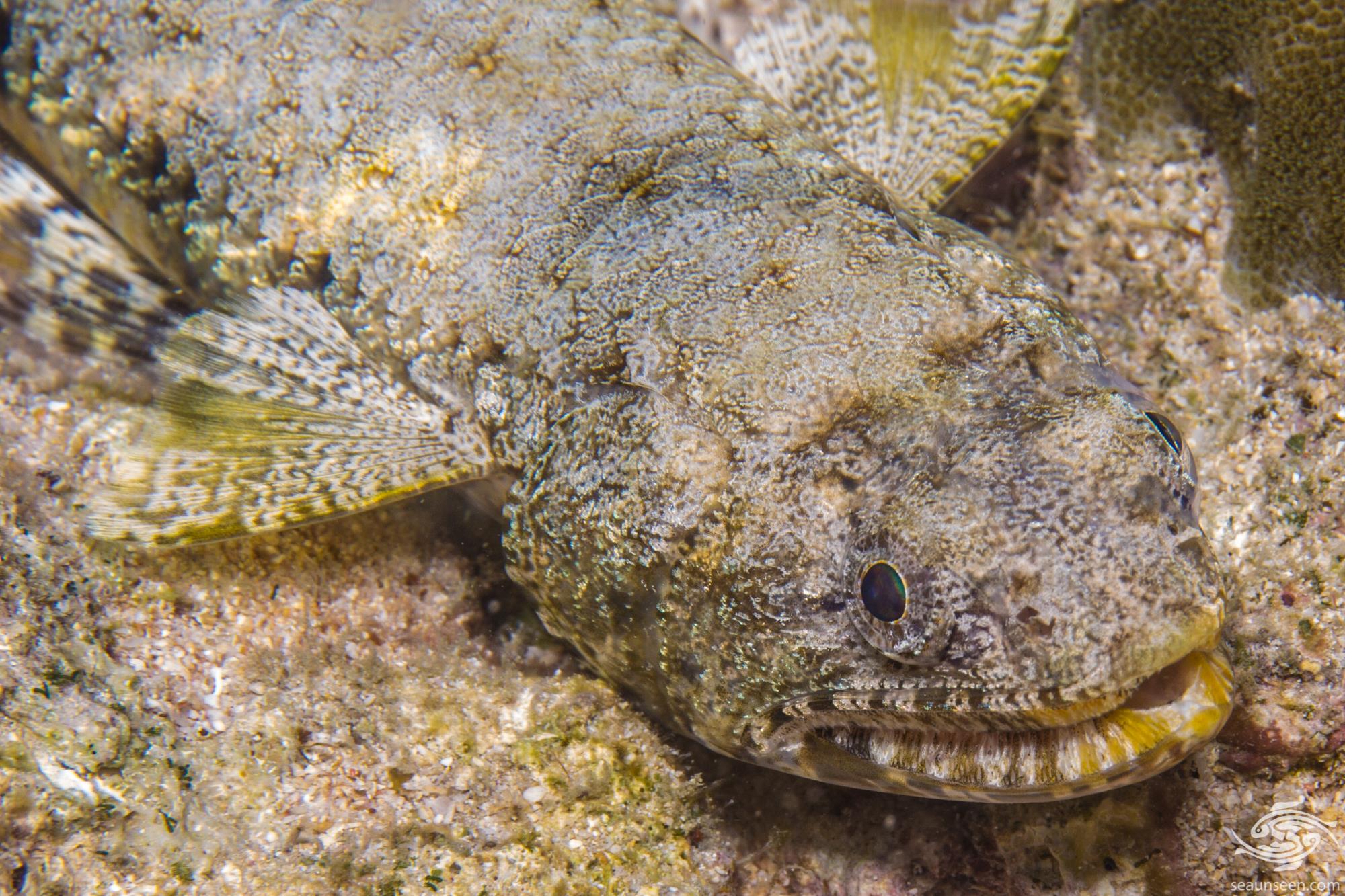 The Graceful Lizardfish is fairly common in Tanzanian waters, they are usually to the side of the reef its self on sand or on sandy areas in between the reef. They will often dig themselves into the sand to further aid their camouflage.  If one is careful and approaches them slowly they will usually sit motionless relying on their camouflage as one gets within a meter or so they will swim off a few meters and settle on the bottom again.

The Graceful Lizzardfish has been documented to biofluorescence. This phenomenon involves a certain spectrum of light hitting the fish and the fish converting the light into a different spectrum and emitting the different spectrum. The human eye cannot see this taking place but with the use of special lighting and a yellow filter over ones eyes one can see the effect. Some fishes have interocular yellow filters in their eyes and it is thought that this allows them to see the biofluorescence. 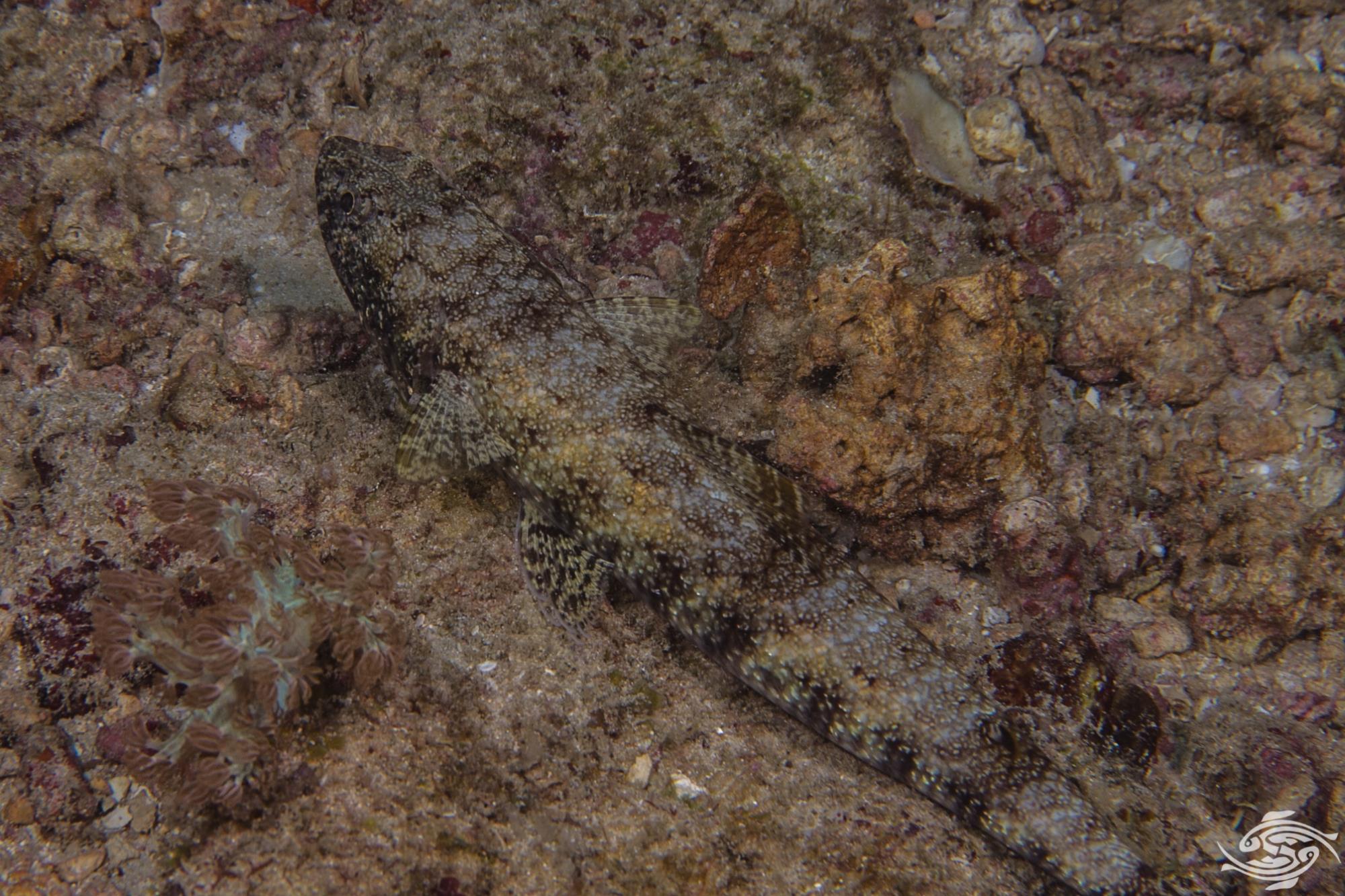 The Graceful Lizardfish is found across the tropical Indo West Pacific area. In Tanzanian waters they are typically found on coral and rocky reefs from depths of 2 meters to 18  meters. Because they are ambush predators they often situate themselves on a prominent spot often with just the head sticking up. 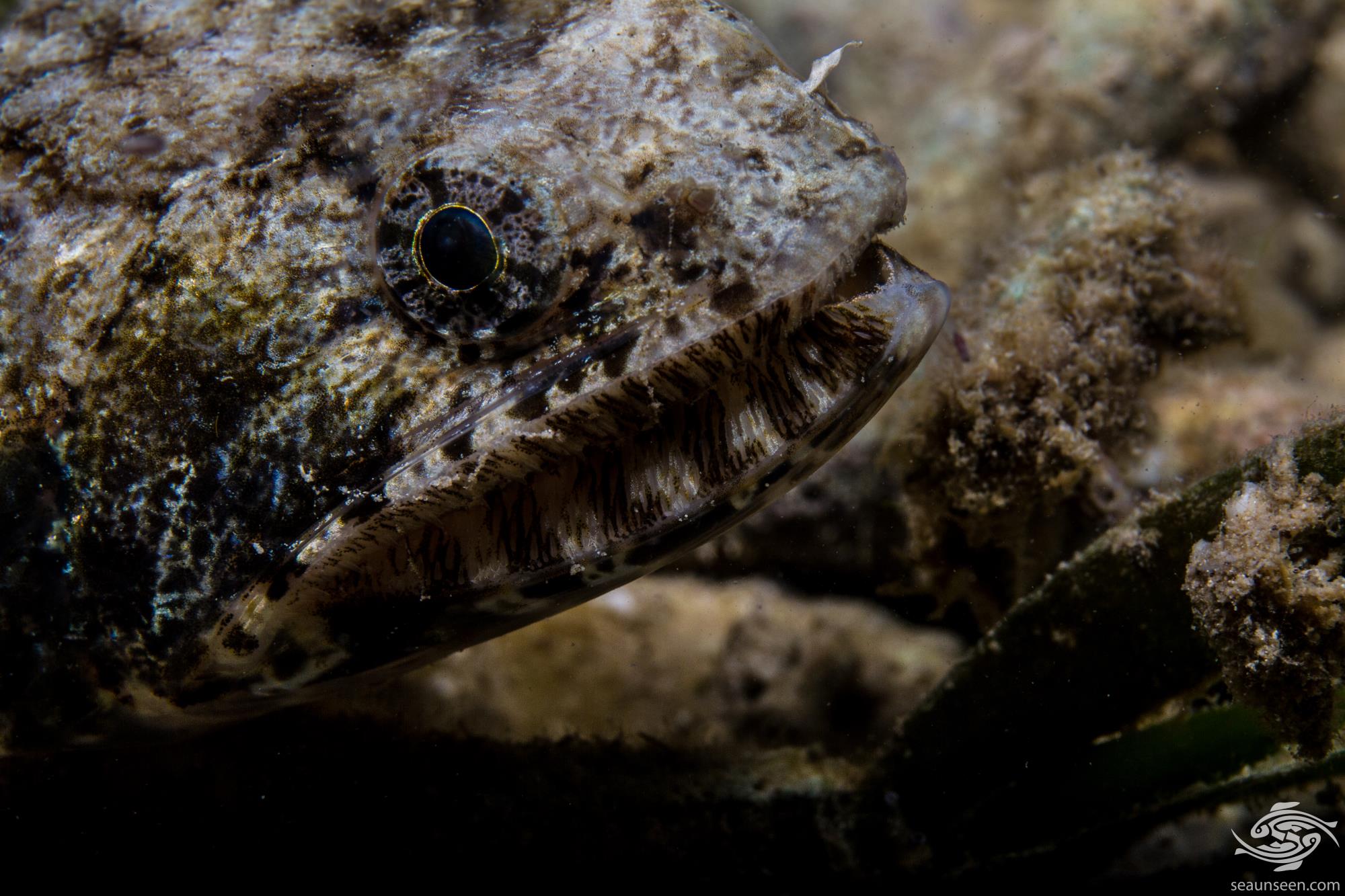 The Graceful Lizardfish are ambush predators and will eat any passing fish or crustacean that they can fit in their mouths. They remain motionless on the substrate and wait for prey to pass above them. Often they dig themselves into the sand with just the head and eyes protruding. They then dart rapidly upwards and usually hit their prey from underneath and behind. Prey is often swallowed whole in one very fast motion, but larger prey is gripped with their teeth and swallowed slowly.  They themselves apparently make very good eating and taste very good fried with ginger. One of their main predators is the Cornetfish , itself an ambush predator but using a different strategy. 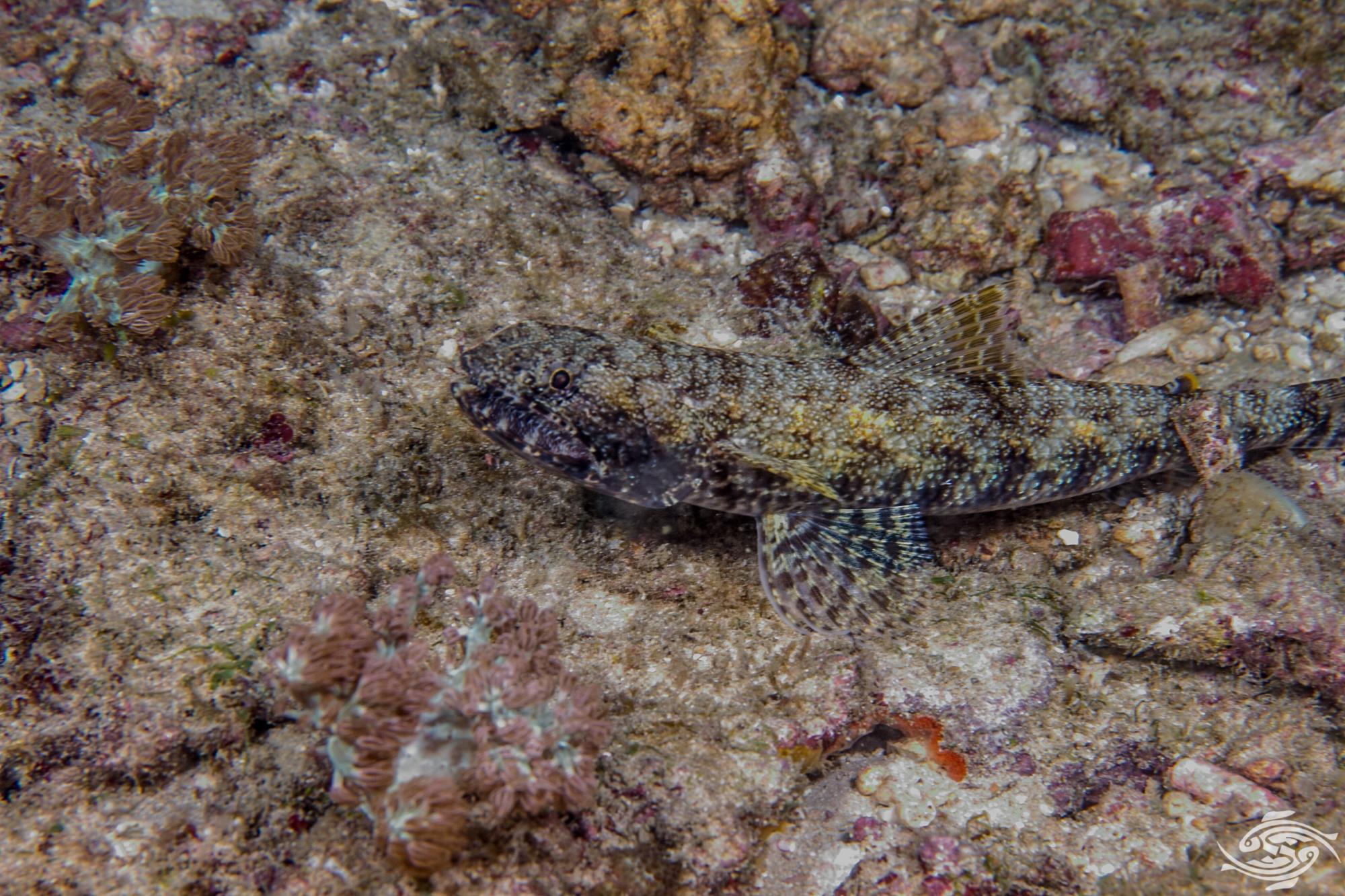 Little seems to be known of their mating habits. They are sometimes seen in pairs usually in spring or summer. 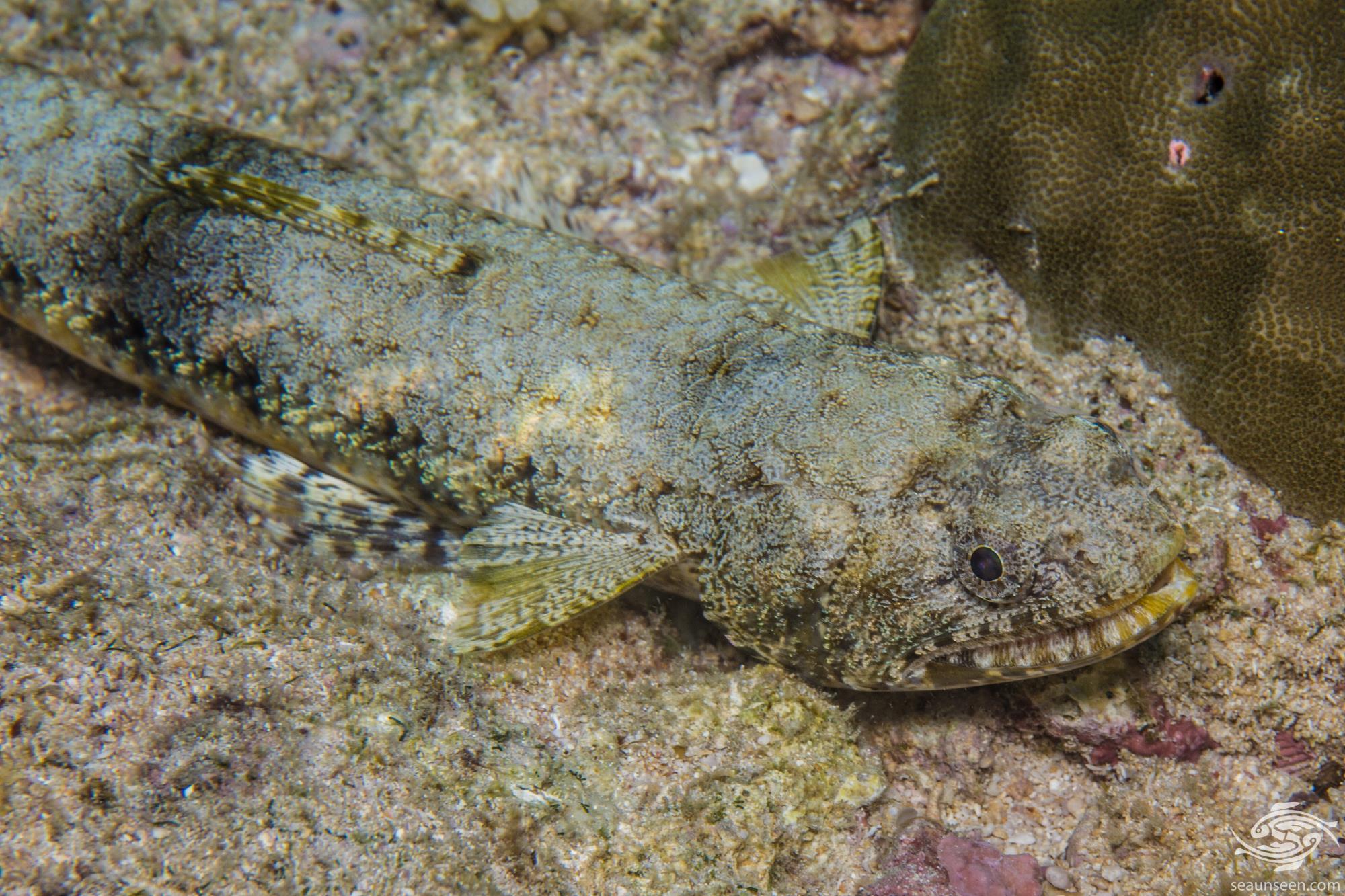 Graceful Lizardfish are sometimes kept in some public  aquariums but because will eat anything that fits in their mouths, they are seldom kept by  aquarists.