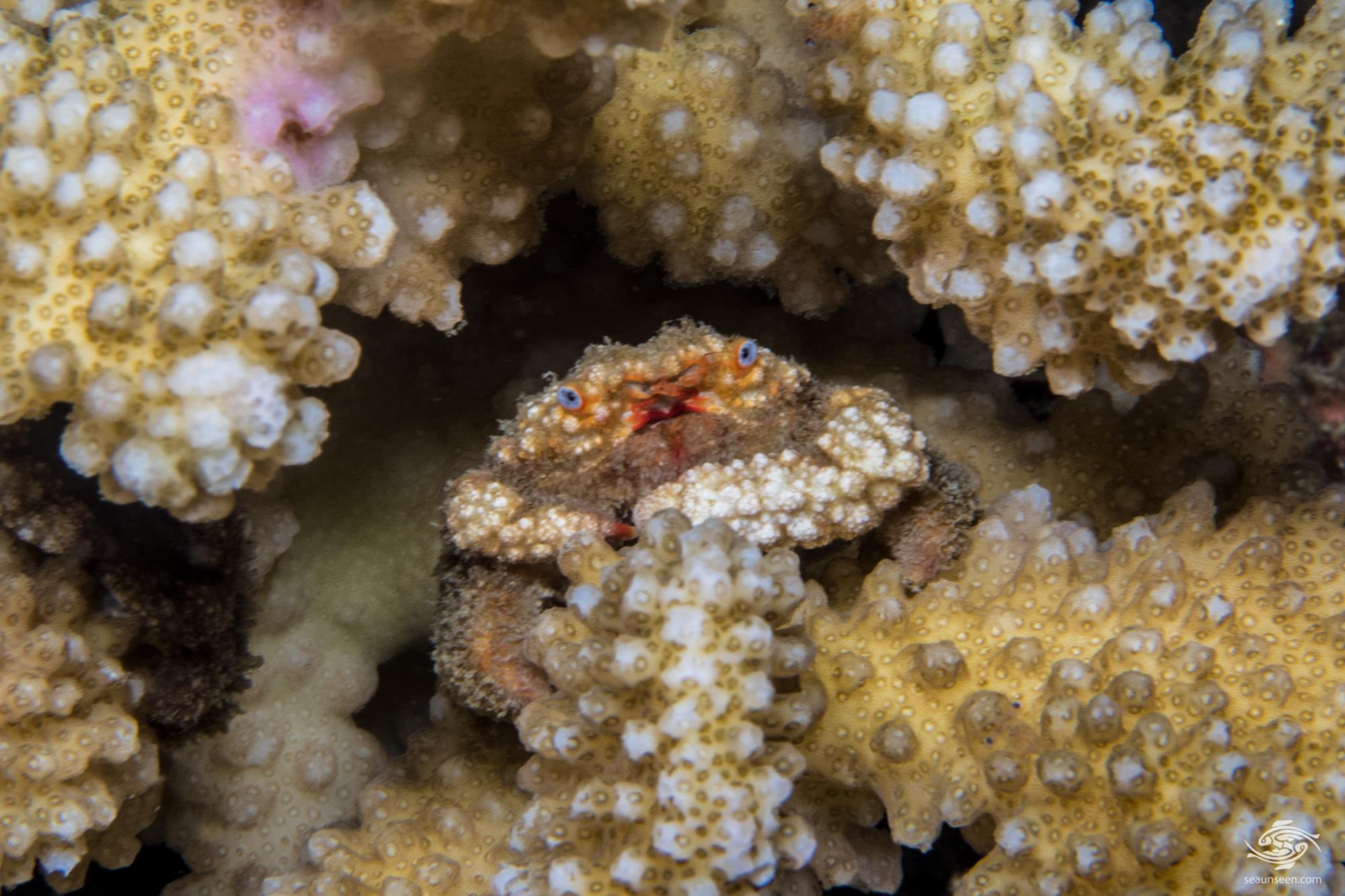 The Hairy Coral Crab (Cymo andreossyi) is also known as the Furry Coral Crab . Being small and well camouflaged they are difficult to spot and are probably best found at night when their eyes reflect light back. One has to look really carefully to find them.

They are decapod crustaceans in the Infraorder  Brachyura, in the Leucosidae family and are true crabs,  they were first described by Audouin in 1826 with the type locality being in the Red Sea. 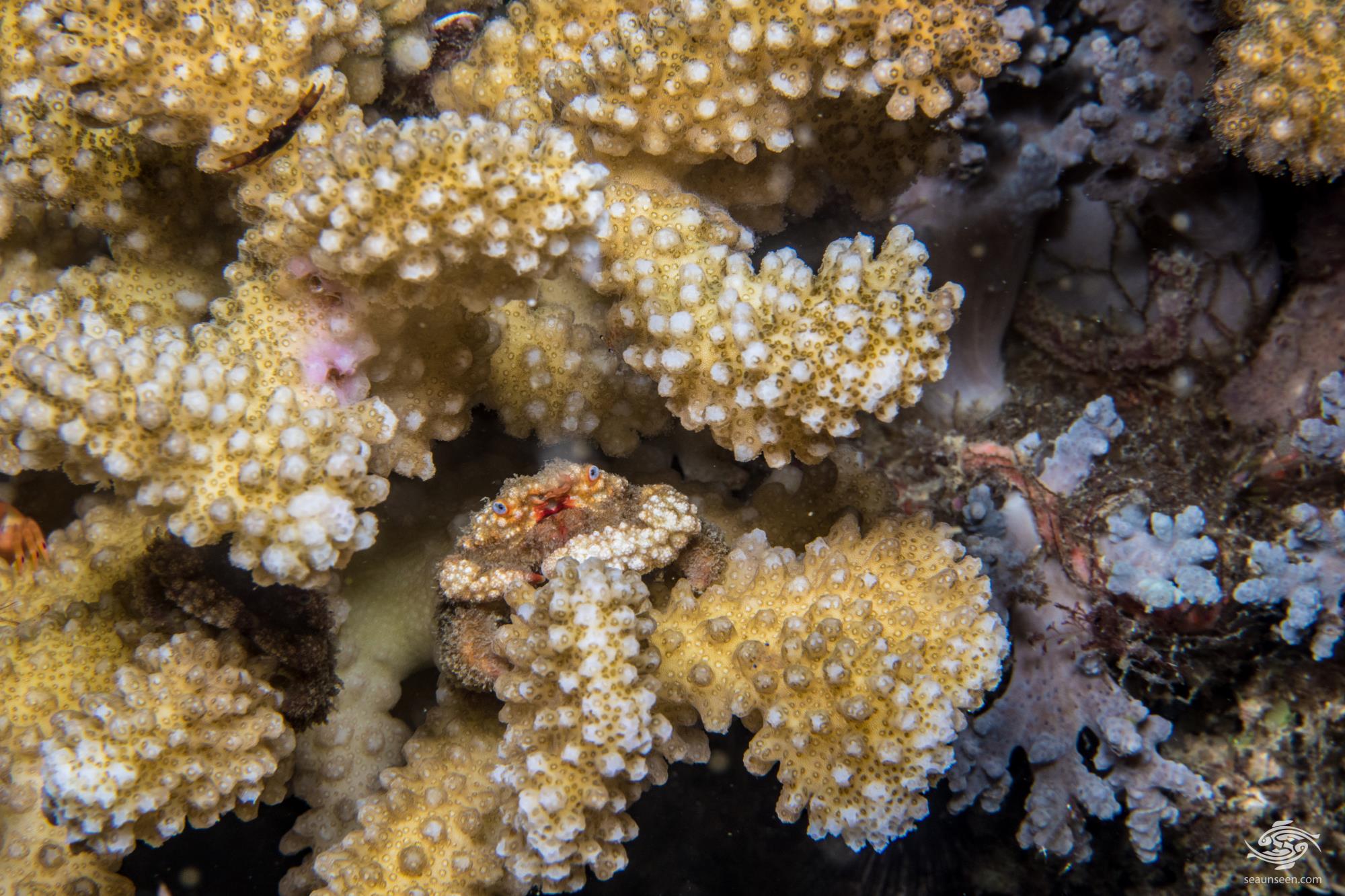 The body and legs are often covered in algae and have a hairy appearance. They grow to a maximum width of 20 mm. The larger claw , generally the left is white tipped in this species. Their claws are curved and provide a good grip in their habitat. 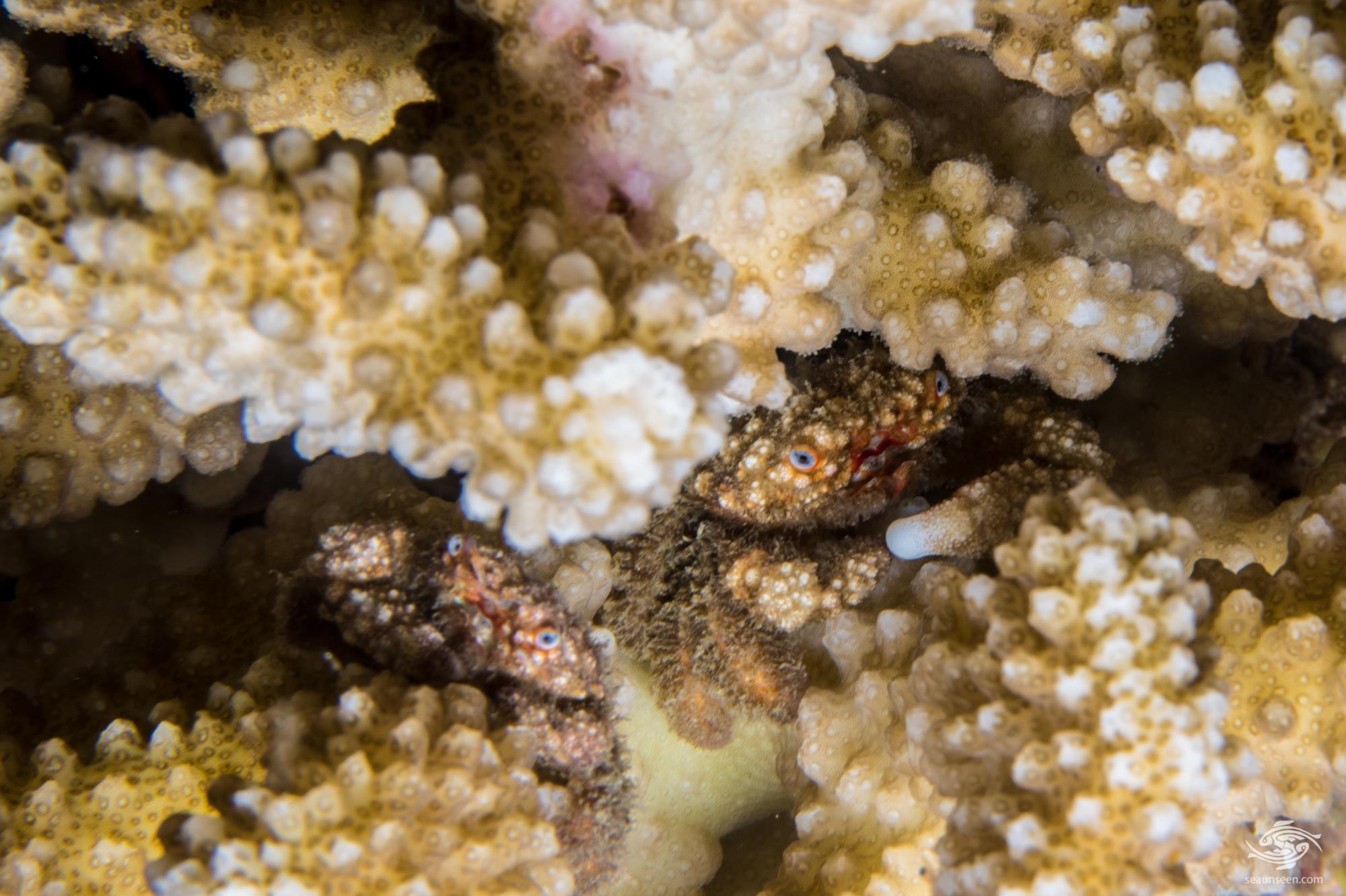 HAIRY CORAL CRAB IN THE WILD

The Hairy coral crab appears to be more active during the night but that said, they are easier to spot at night so this could account for them being seen more often at night.  They are found on branching corals in the sub littoral zone and we have found them on shallow offshore reefs to a depth of at least 14 meters off Dar es Salaam in Tanzania. 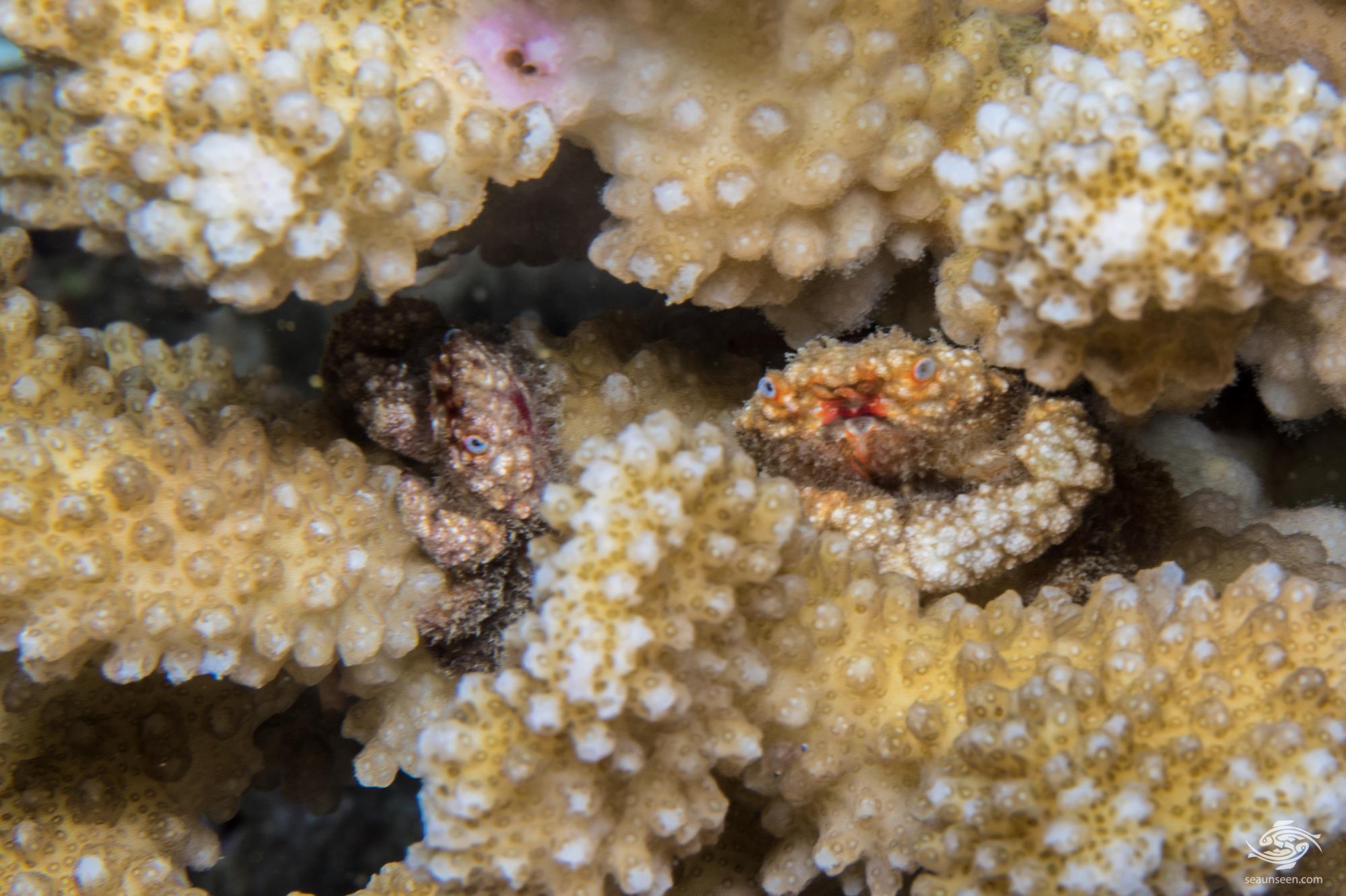 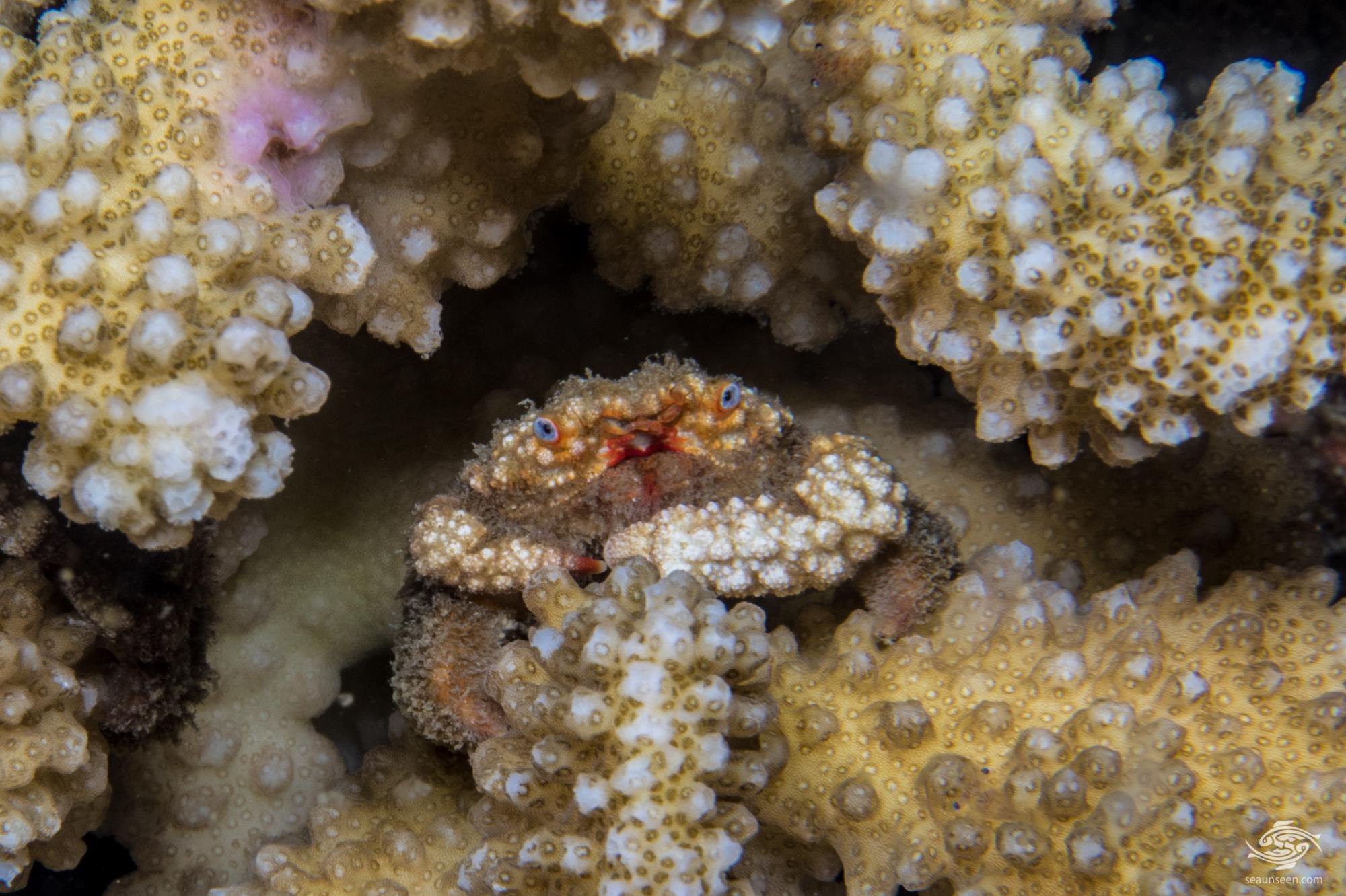 Hairy Coral Crabs are assumed to feed on mucus and polyps from the host coral but there is very little information on their habits or diet. They massage the coral polyps with their legs until the polyps release a slimy mucus which the crabs eat. The crabs provide protection to the corals from external threats. Scientists refer to this type of relationship as mutualism. Both species benefit from being together.

There are several different species of guard crabs that make their homes on the branching corals and in the larger corals one will often see more than one species. There will however only be one pair from each species.

One would assume that they would be quite safe from any predator in their coral home, however one night I viewed a large Broadfin Cuttlefish pulling Hawkfish and crabs out the coral one by one. The cuttlefish felt around the coral with his arms and then extracted them with his tentacles. 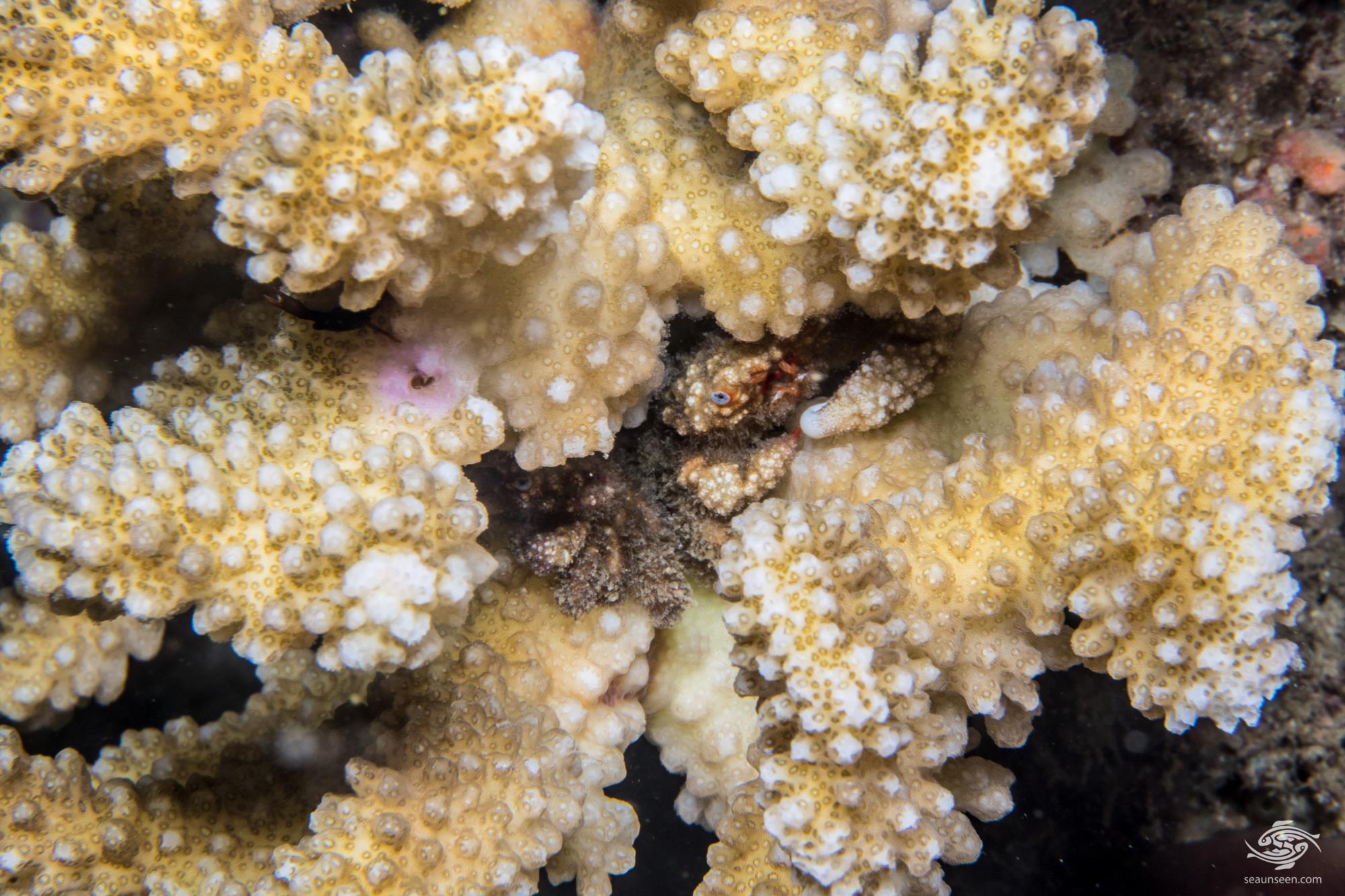 The eggs are fertilised by the male and are then carried under the body of the female. Once they hatch the larvae go through a planktonic stage before settling down and growing into their adult form. The Hairy Coral Crab is more often than not seen in pairs with one pair inhabiting a coral. 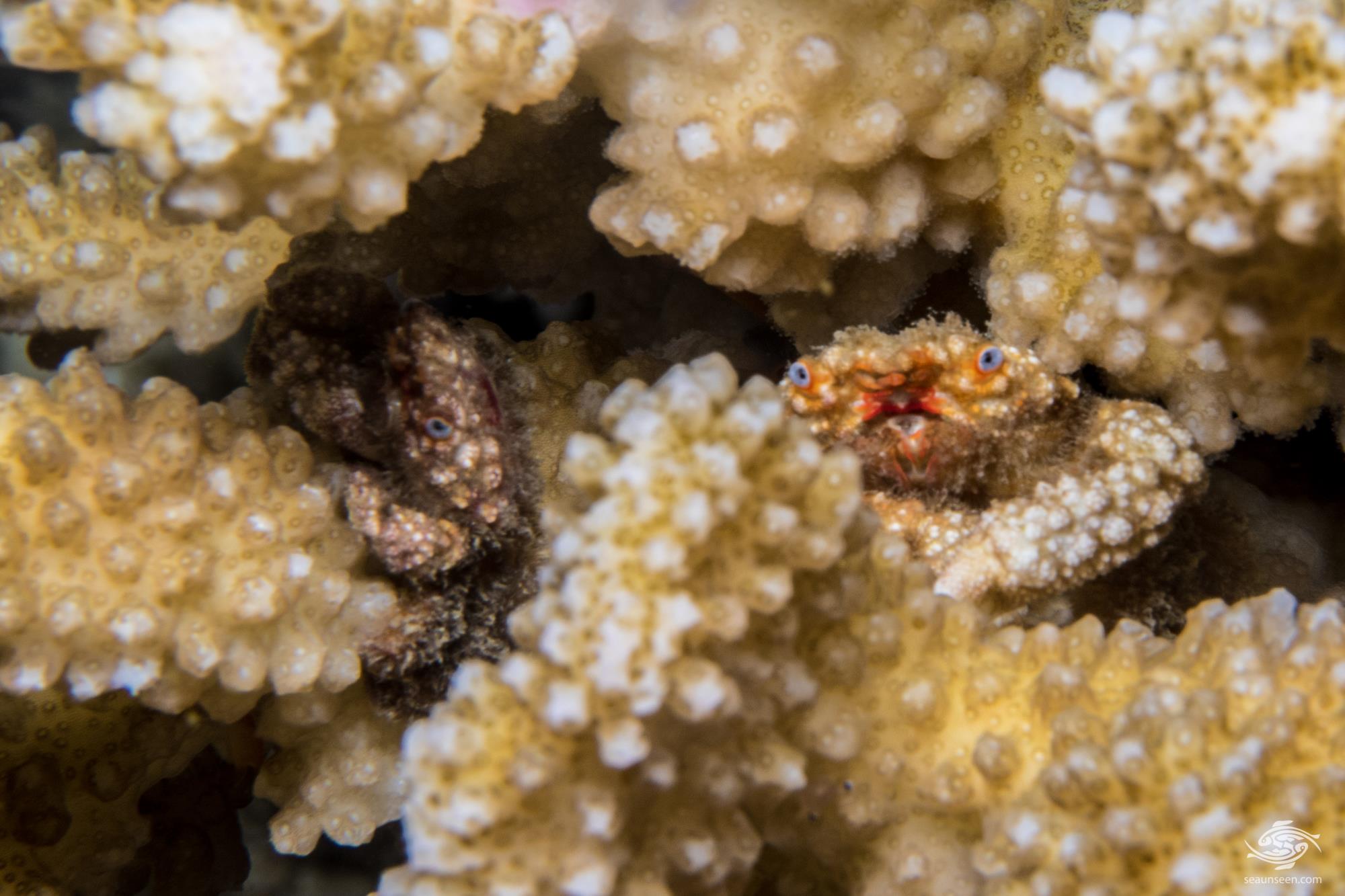 As a rule aquarists tend to steer away from hairy crabs in their tanks. It is possible that it might be safe to keep these crabs in an aquarium but at ones own risk.