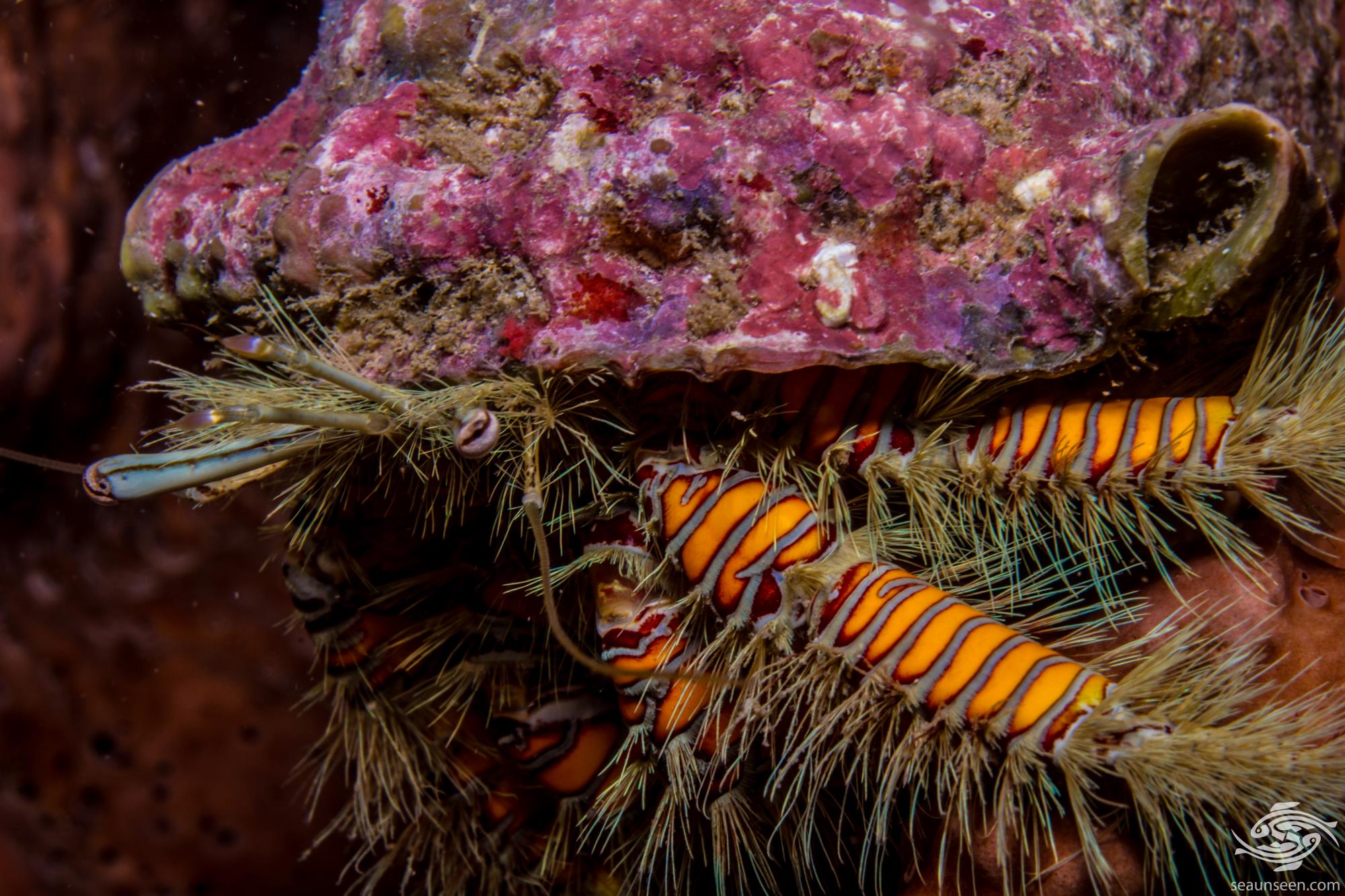 The Hairy Yellow Hermit Crab (Aniculus maximus) is also known as the Large Hairy Hermit Crab. They are one of the larger more colourful hermit crabs that spend their lives in empty gastropod shells. They are not common at all in Tanzanian waters and have only been seen out at night.  In terms of looks it is hard to choose between them and the Giant Spotted Hermit Crab. 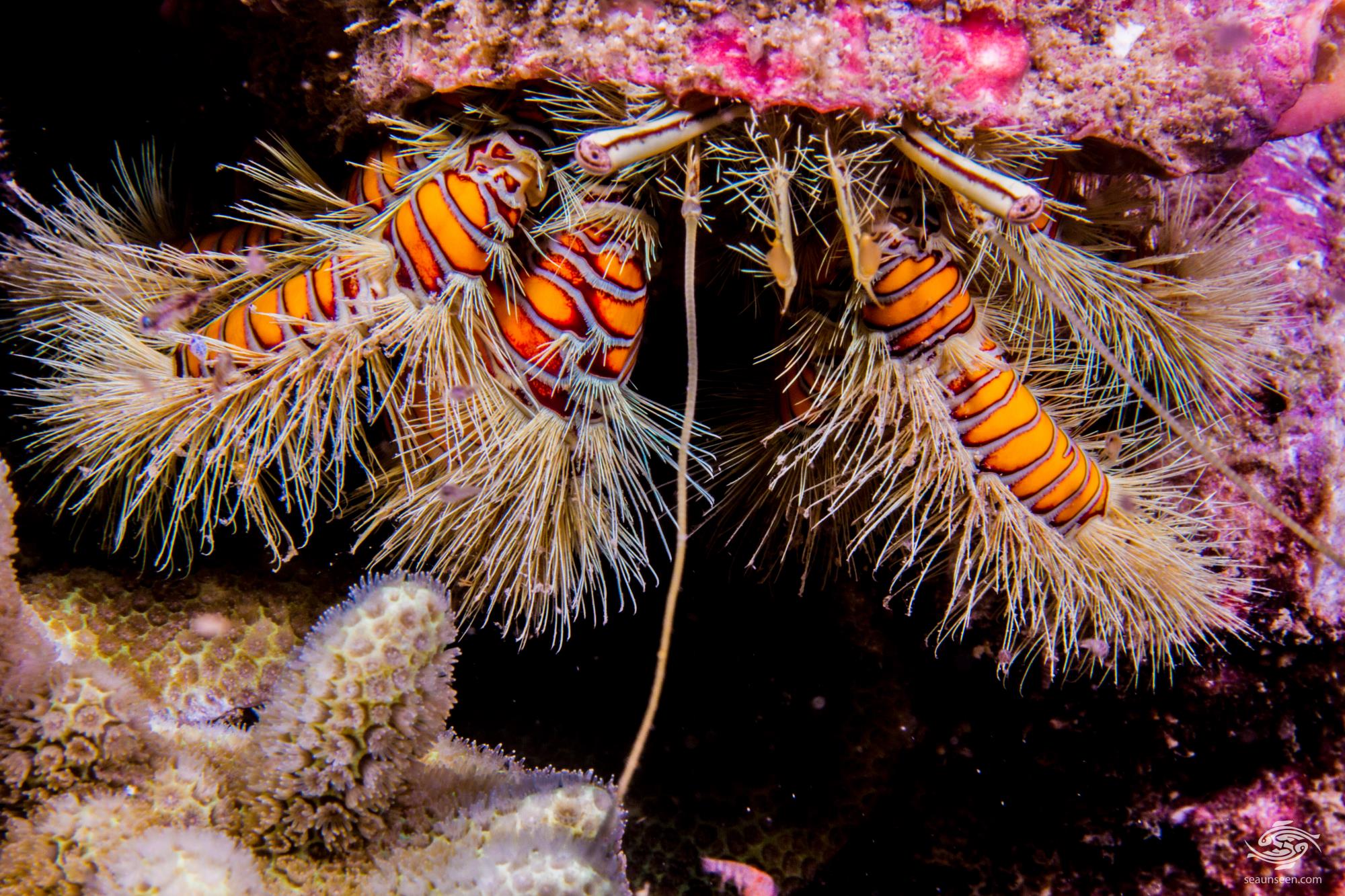 Hairy Yellow Hermit Crab crabs are easily recognizable by their colouration, having  yellow or orange legs that are lined with irregular grey lines with a red edge. They are extremely hairy as can be seen in the images. Similar to the spiny lobsters they have two sets of antennae, one short pair in the middle with sensory organs on it and the other longer and extendable outwards. Usually only the legs and head are seen protruding from the shell. The eyes are light blue stalks with a stripe running up the stalk across the eye. The eyes can be seen in detail below.

The first set of legs has claws, and although everyone seems to say that the left claw is larger, this is not what we have observed, both claws appear to be the same size. The claws are used as a barrier to seal themselves into the shell when threatened.  The second and third legs are used for walking. The rear of the body is adapted to fold into the shell. The Hairy Yellow Hermit Crab crab grows up to 10 cm in width. 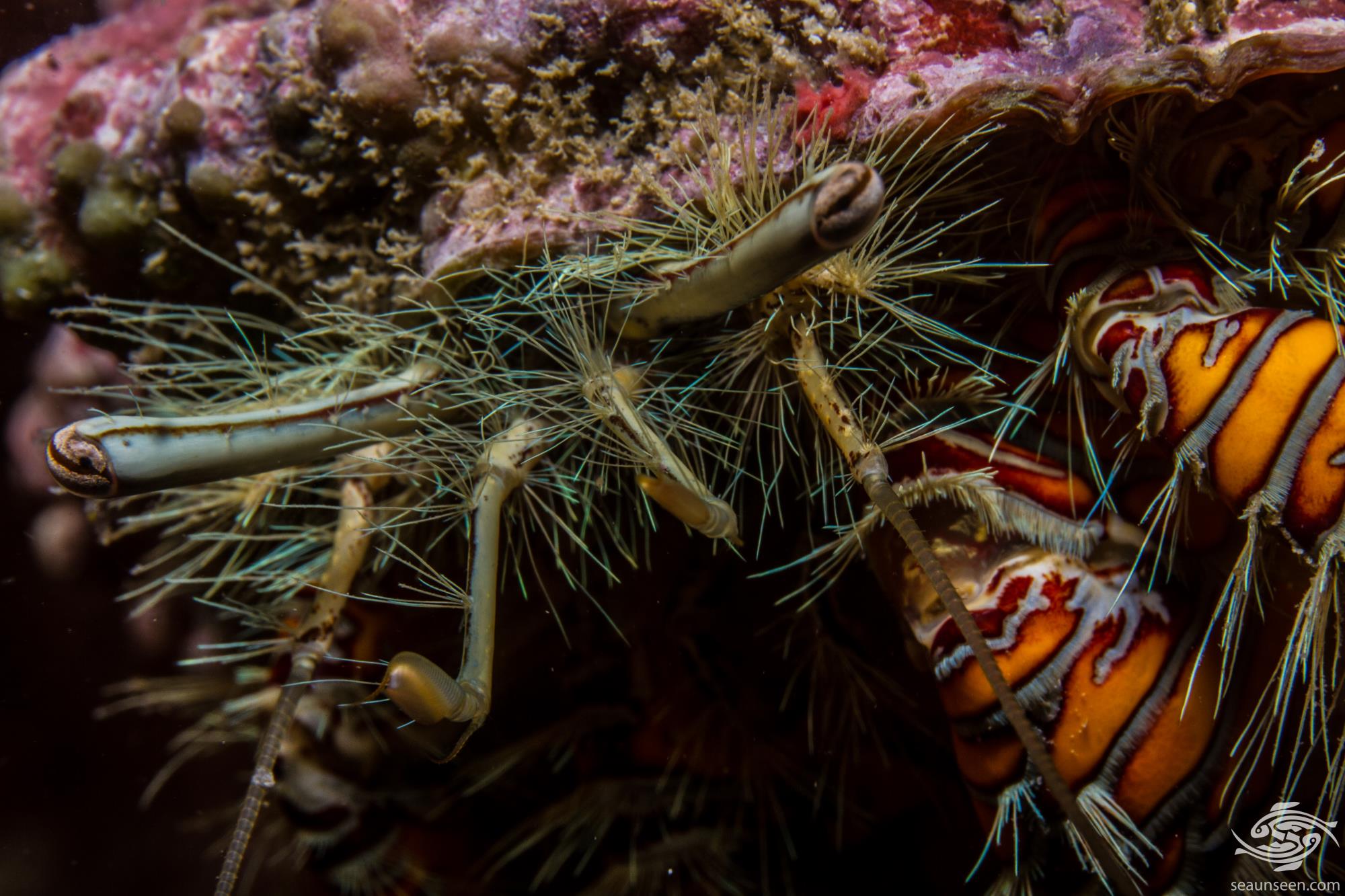 Hairy Yellow Hermit Crab are only normally seen out at night in Tanzanian waters. They have a lot of character, sometimes they are quite fearless of divers and will sit and preen themselves out in the open not at all bothered by the diver. On other occasions they either move into hiding or will retract into the shell. As they grow larger so they need larger shells which are often in short supply. As with all crustaceans when they molt they grow in size and their exo skeletons are very soft making them vulnerable to predators. 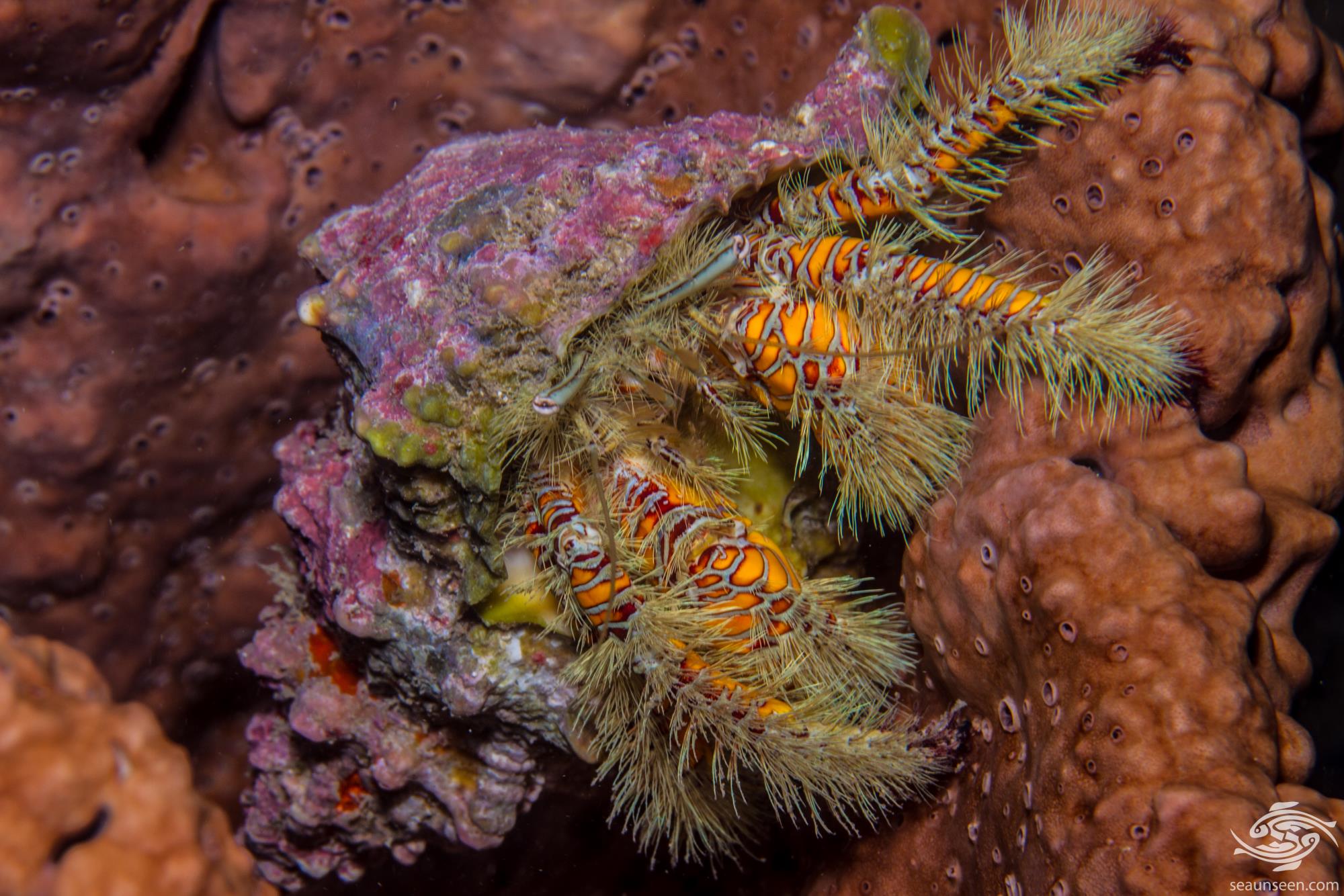 There can be quite some urgency to find a larger shell after moulting. They will actively fight over shells, with larger crabs going as far as pulling a weaker crab out of its shell using its claws. Occasionally while diving one comes across such fights. On the last occasion the larger crab let go of the smaller one and the smaller one headed off at great speed towards me across the bottom very obviously preferring its chances with me rather than the larger crab. We have always seen the Hairy Yellow Hermit Crab solitary and have never seen more than one individual at any one time. 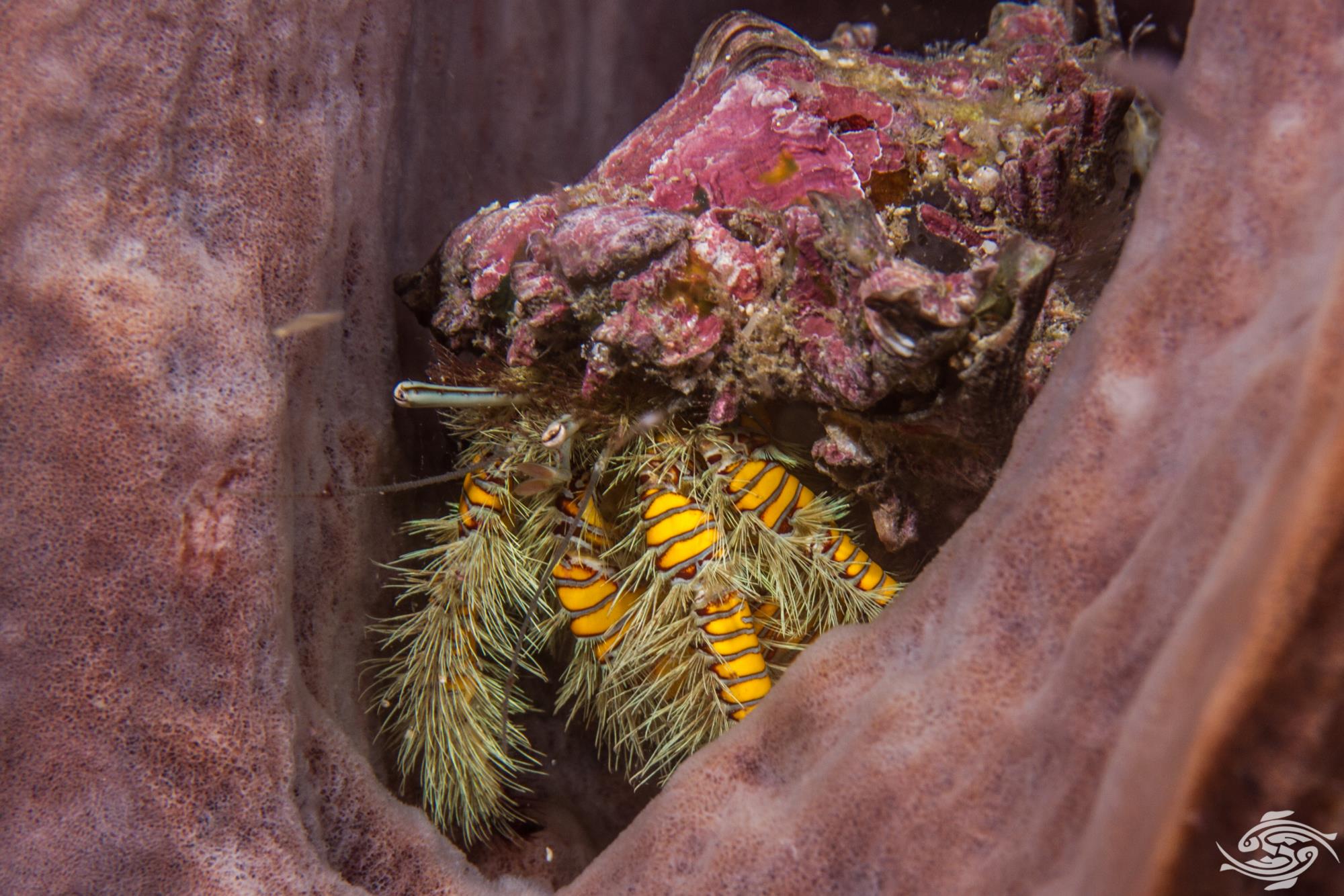 The giant spotted hermit crabs are found on coral and rock reefs across the Indo Pacific area from the African coast across to southern Japan and south to Australia. They are usually found shallower than 15 meters. We have sighted them in or on the top of barrel sponges on most of the occasions that we have seen them, but it is unclear whether this is because the barrel sponges give them an elevated view or if there is some other reason. 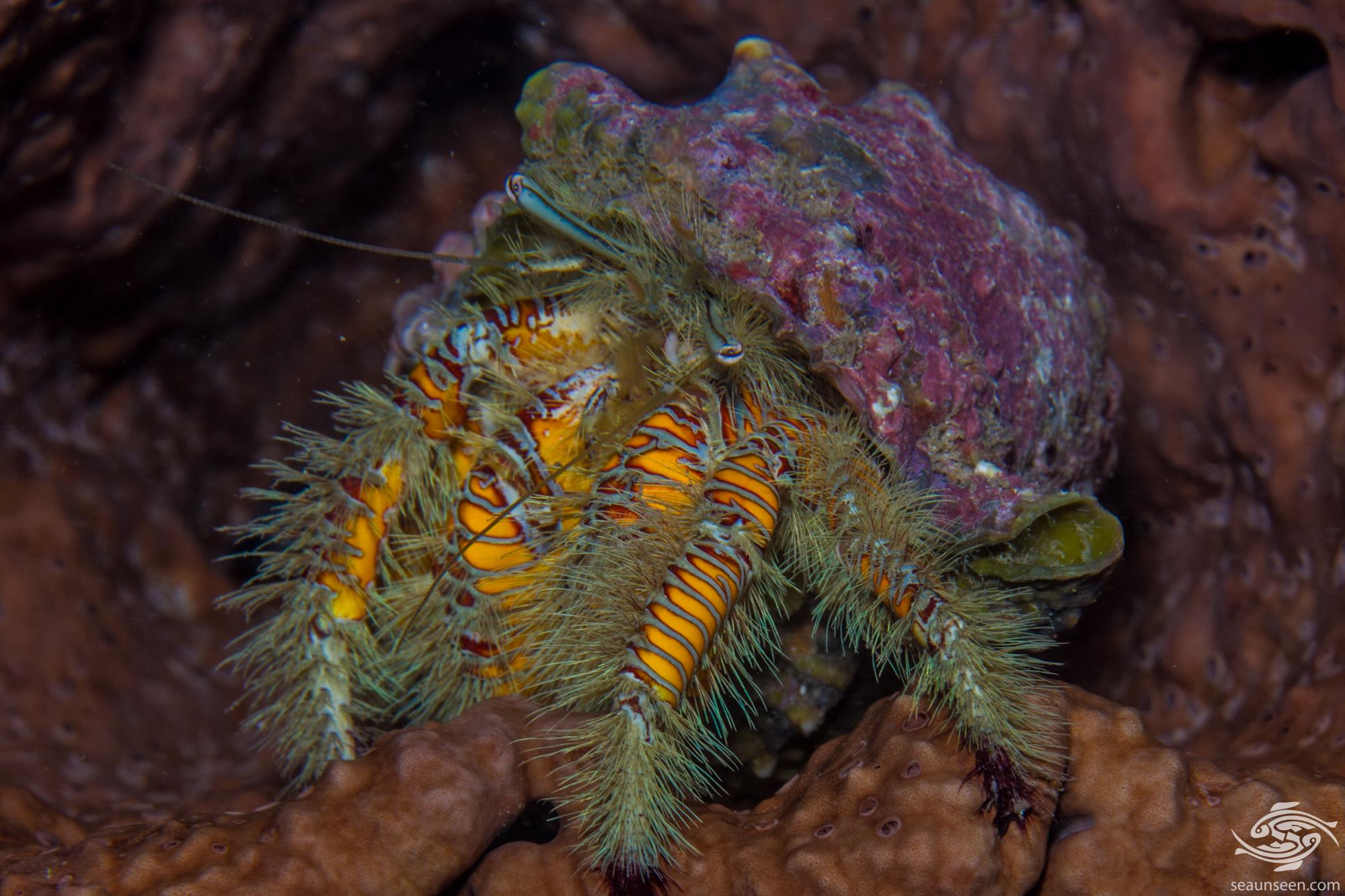 Hairy Yellow Hermit Crab are omnivores and eat both algae and meat and will almost certainly scavenge as well. They will likely break open and eat any mollusc that they can open. 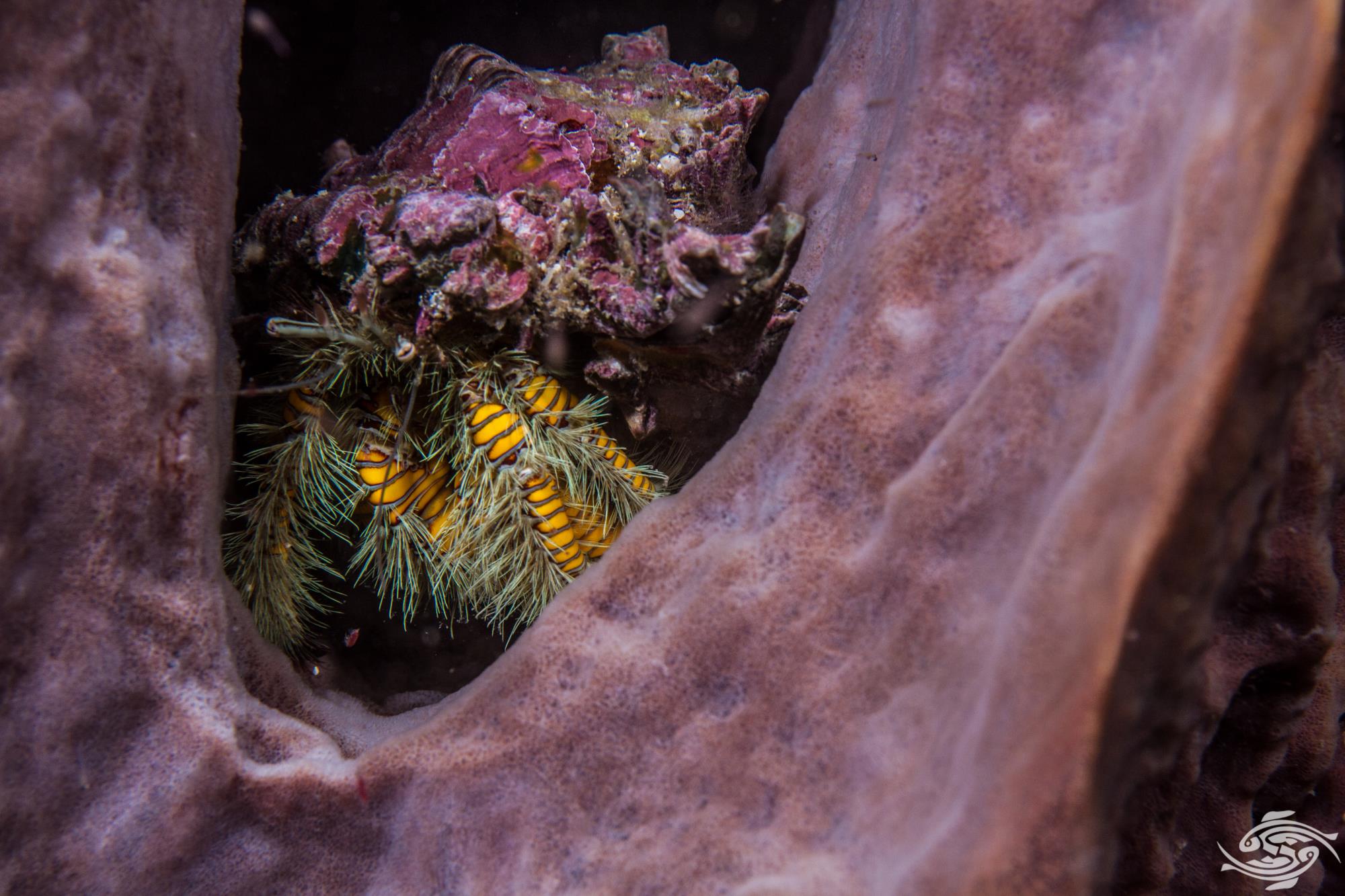 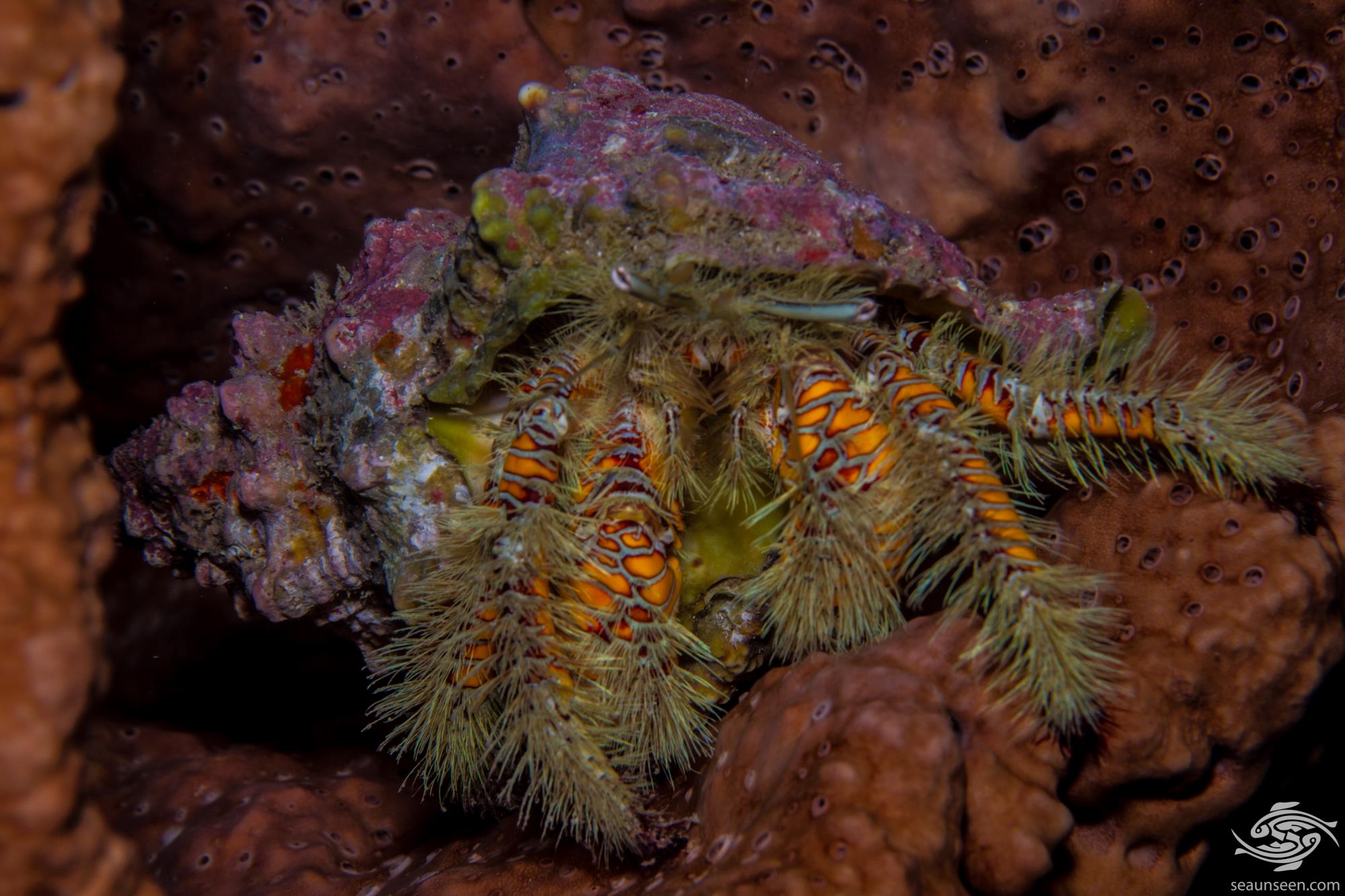 They are not reef safe and because they are carnivorous can do a considerable amount of damage in a tank. If kept they need a supply of larger shells in the tank to switch to. They are easy to feed and will devour large amounts of food. They are really only suitable for species only tanks. Given that the long term survival rate of Hermit Crabs in tanks is not good, one has to question whether they should be in a tank in the first place.