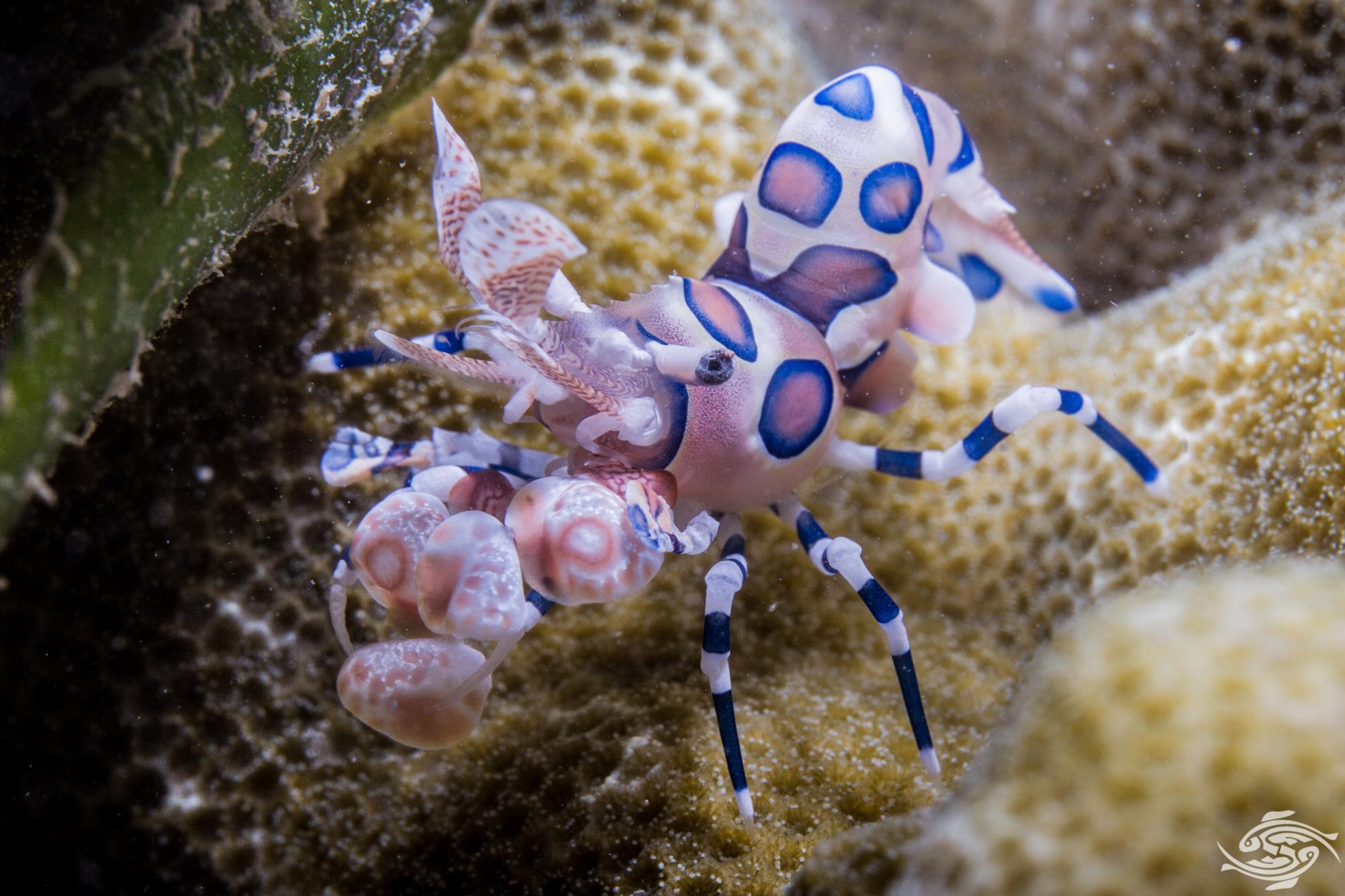 The Harlequin shrimp (Hymenocera picta) is one of the more colourful and ornate shrimps around. Their ornate specialised mouth parts and sensory organs elicit a second look, along with leaving one wondering if they are real. They are highly specialised predators that feed almost exclusively on sea stars or starfish as they are commonly known. Despite their small size they are able to team up and take on starfish much larger than themselves. 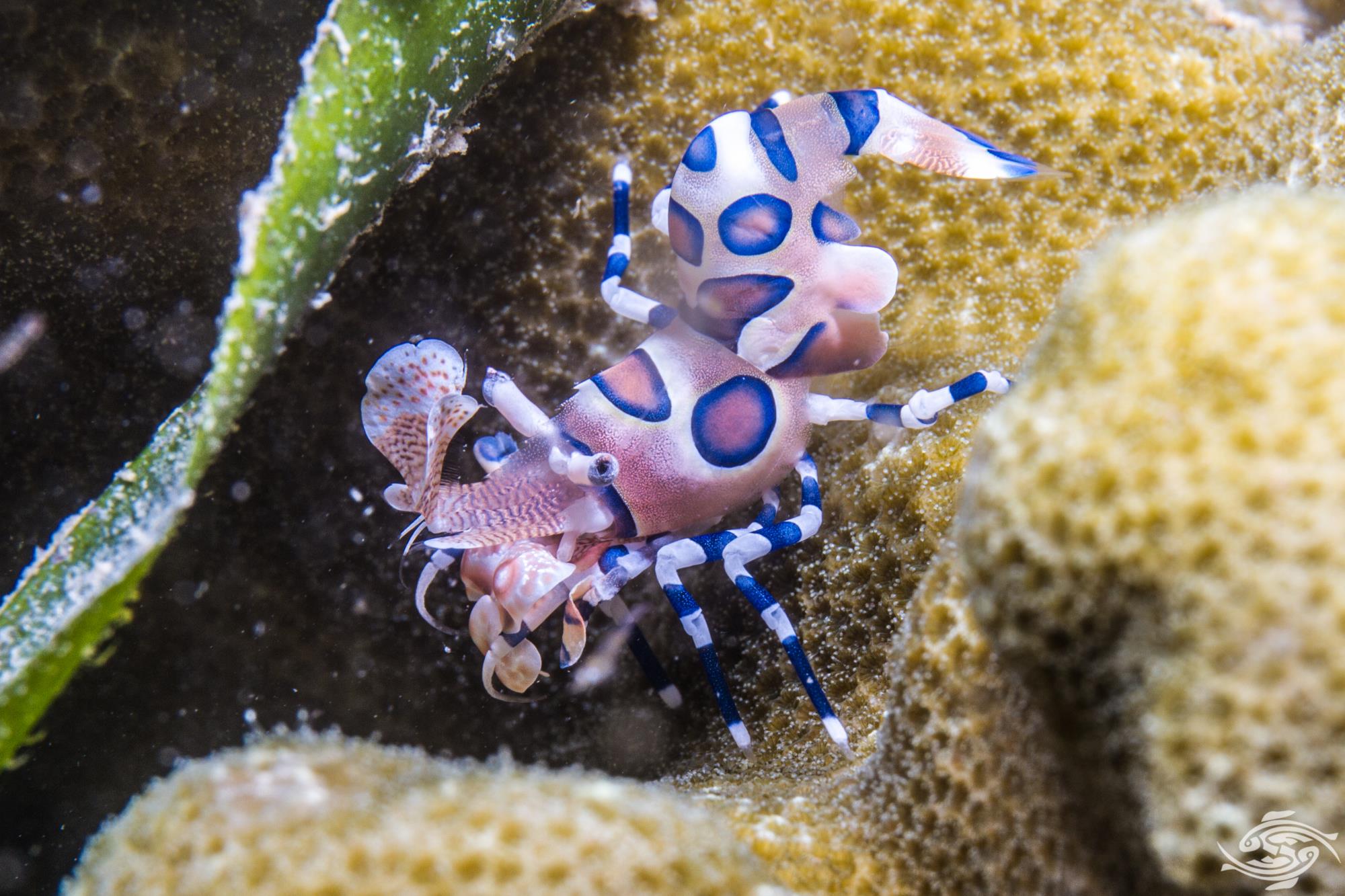 The Harlequin Shrimp has a maximum body length of 50 millimetres. Females are slightly larger than males. The background colour in Tanzania ranges from a pink to a pinky brown colour. and there are several round or irregular darker pink or pink brown  spots ringed in a bright blue spread across the body.  Some specimens have solid blue dots on them.  On the tail there are two prominent blue dots which may function as eye spots to fool predators. The legs are white with blue bands on them and there are large ornate claws on the front legs that are used for display. There is a serrated spike pointing forward between the stalked eyes.  In Hawaii their colouration is different and the spots are purple or pink ringed in yellow. 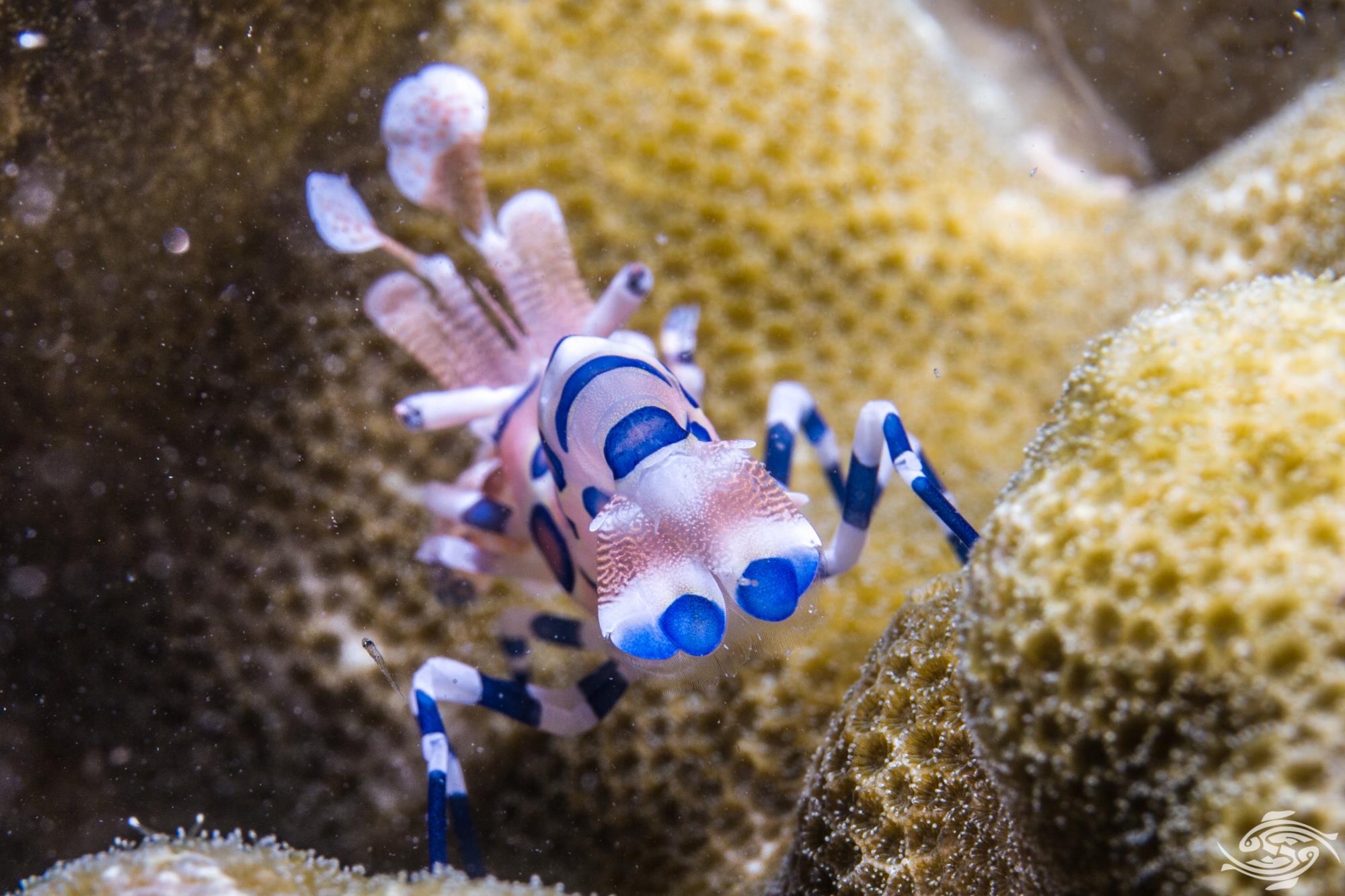 They are often seen in pairs usually hiding under rocks or in crevices during the day. Occasionally single specimens are seen out in the open during the day. At night in some rubble areas it is fairly common top see them out hunting for starfish. They are able to pull starfish several time larger than themselves off the rocks. They then carry them back into their hiding spot and have a meal for the next few days. A friend of mine had a pair in a tank and when he dropped a starfish in the tank, out of their sight, they were almost immediately out to grab it. This even though the starfish was several feet away and right out of their line of sight. 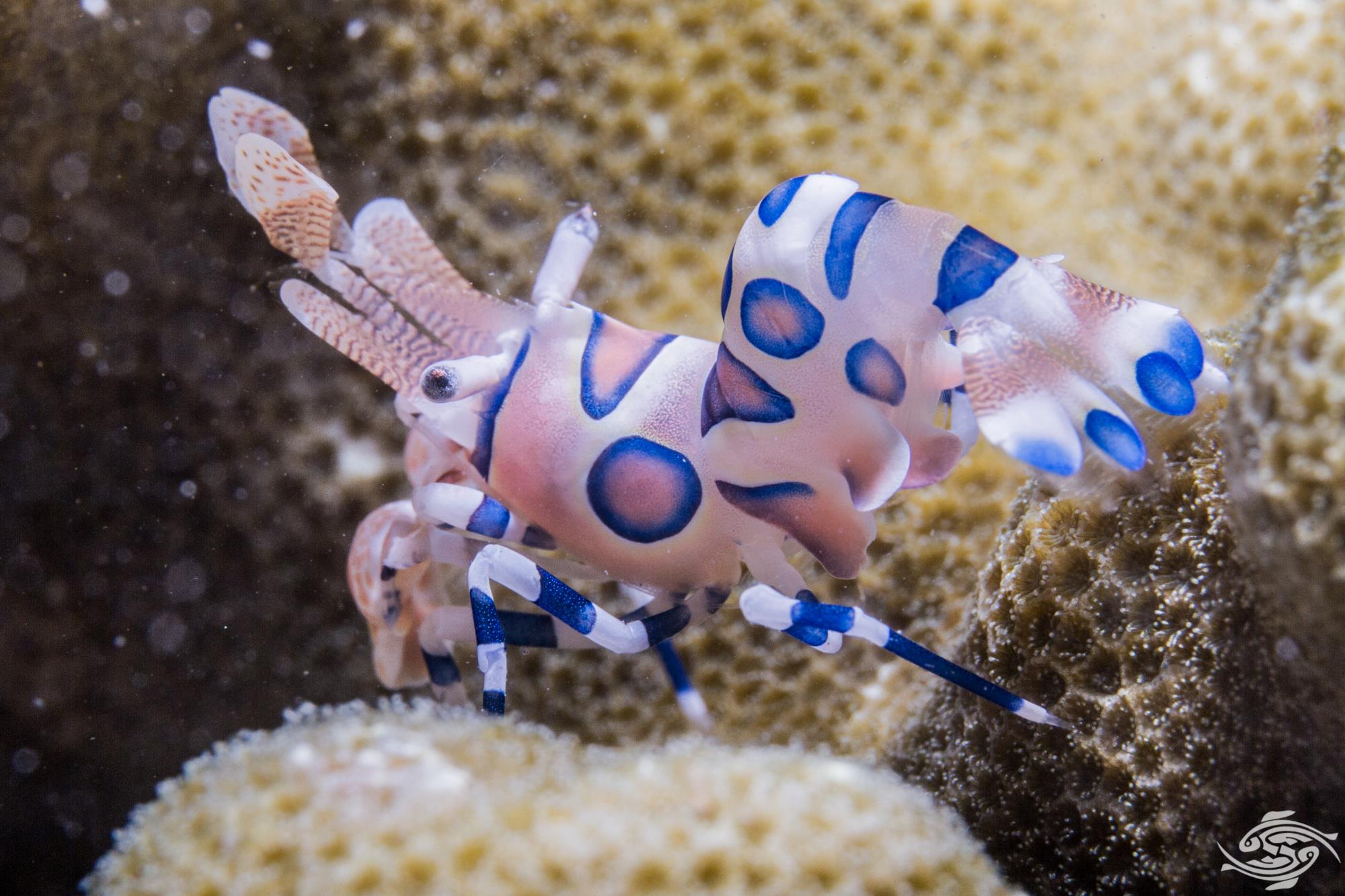 The Harlequin Shrimp are distributed across the Indo Pacific area. They are found up the East African coast across to Australia and New Zealand and up to Japan and across to Hawai. They are found from depths of one meter to at least thirty meters on the Tanzanian coast. 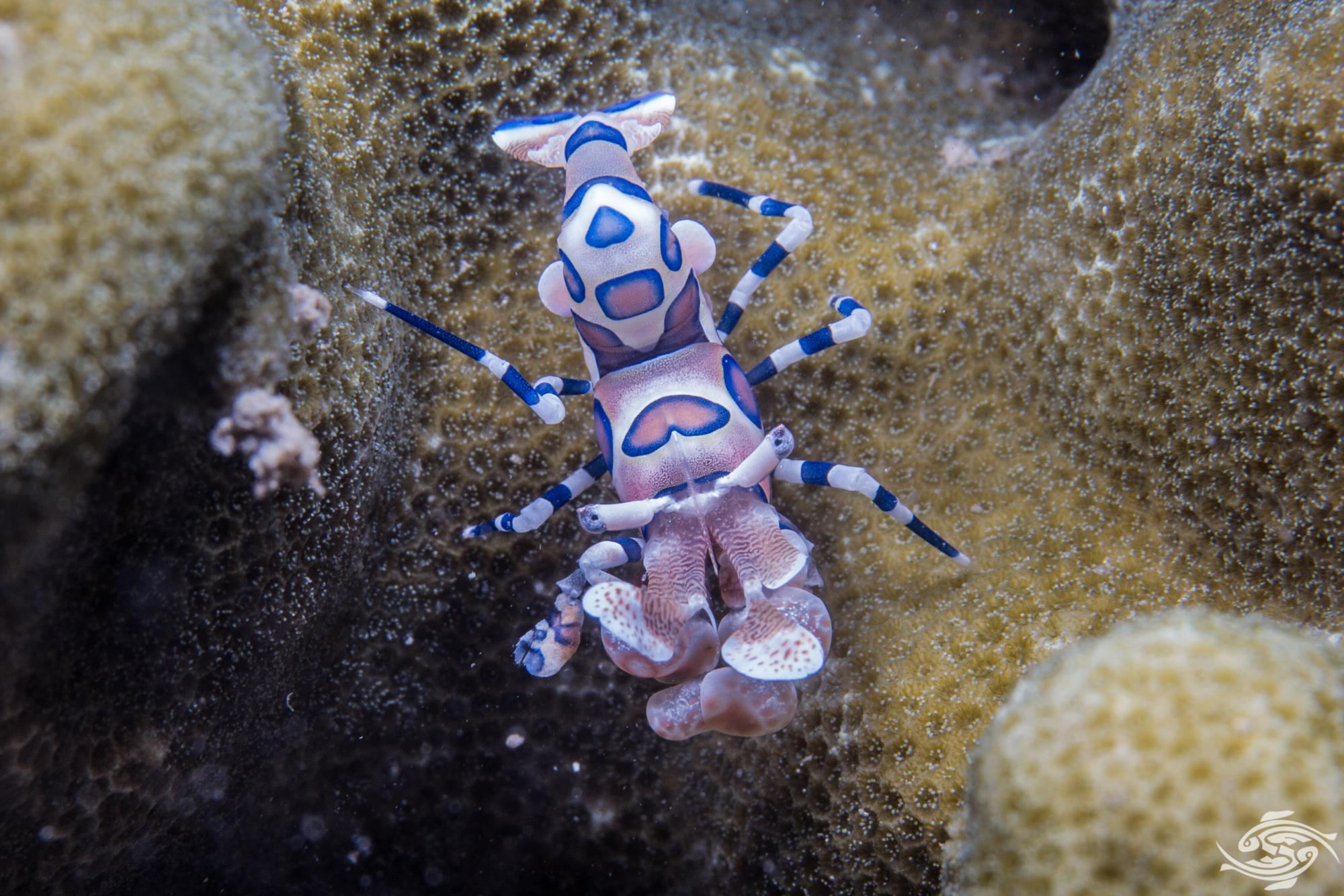 The Harlequin Shrimp feed almost exclusively on starfish. It is reported that they may eat the tubercles of urchins if no other food is available, 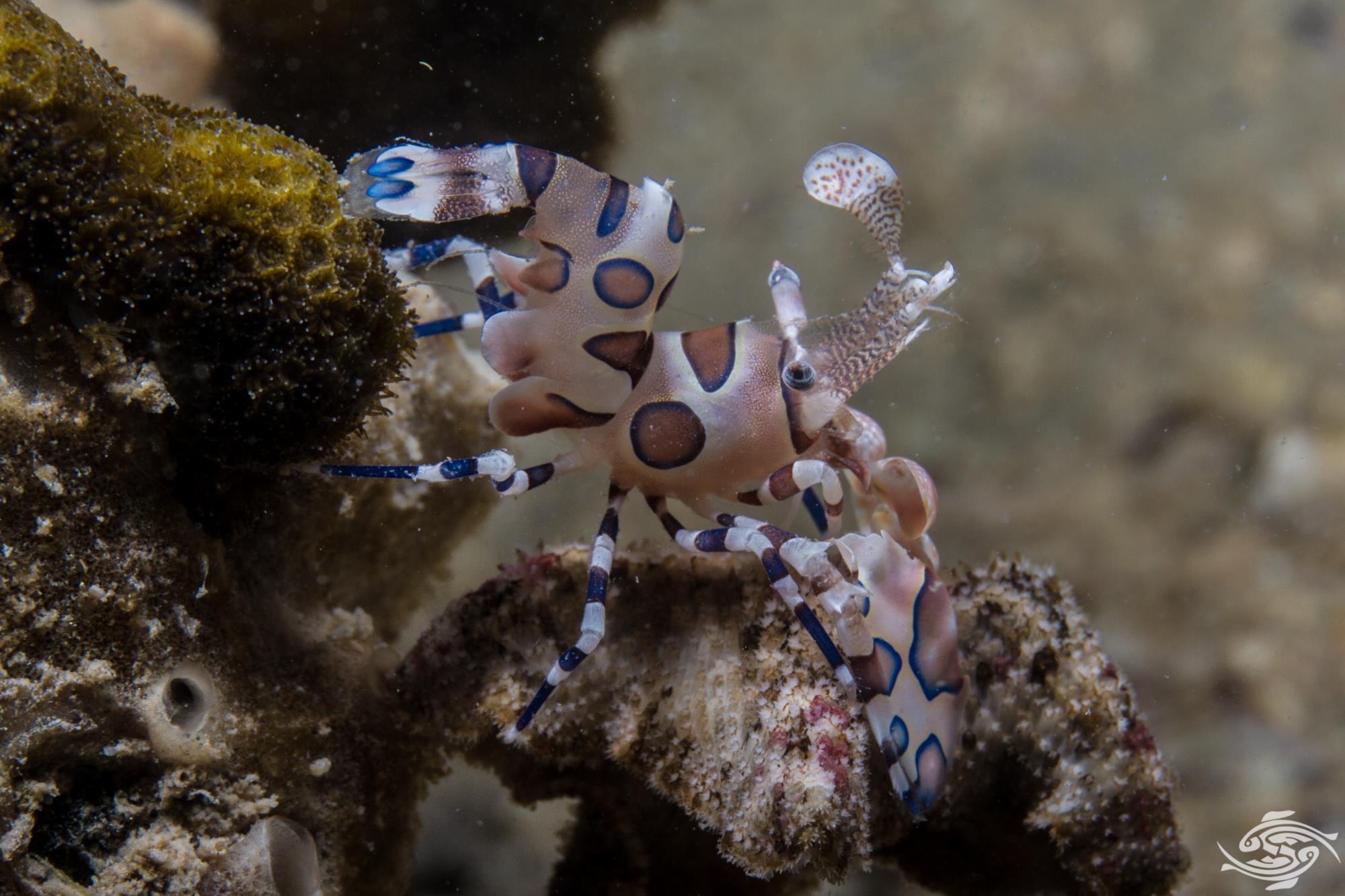 The Harlequin Shrimp are either male or female and form monogamous relationships. They are often seen in pairs with the exception of in spring when younger specimens are seen on their own. Once they mate the eggs develop on the female and when these hatch there are several larval stages that the larvae go through. They are free swimming for a period until the young develop into small adults. The female can only mate at a certain stage of moulting. 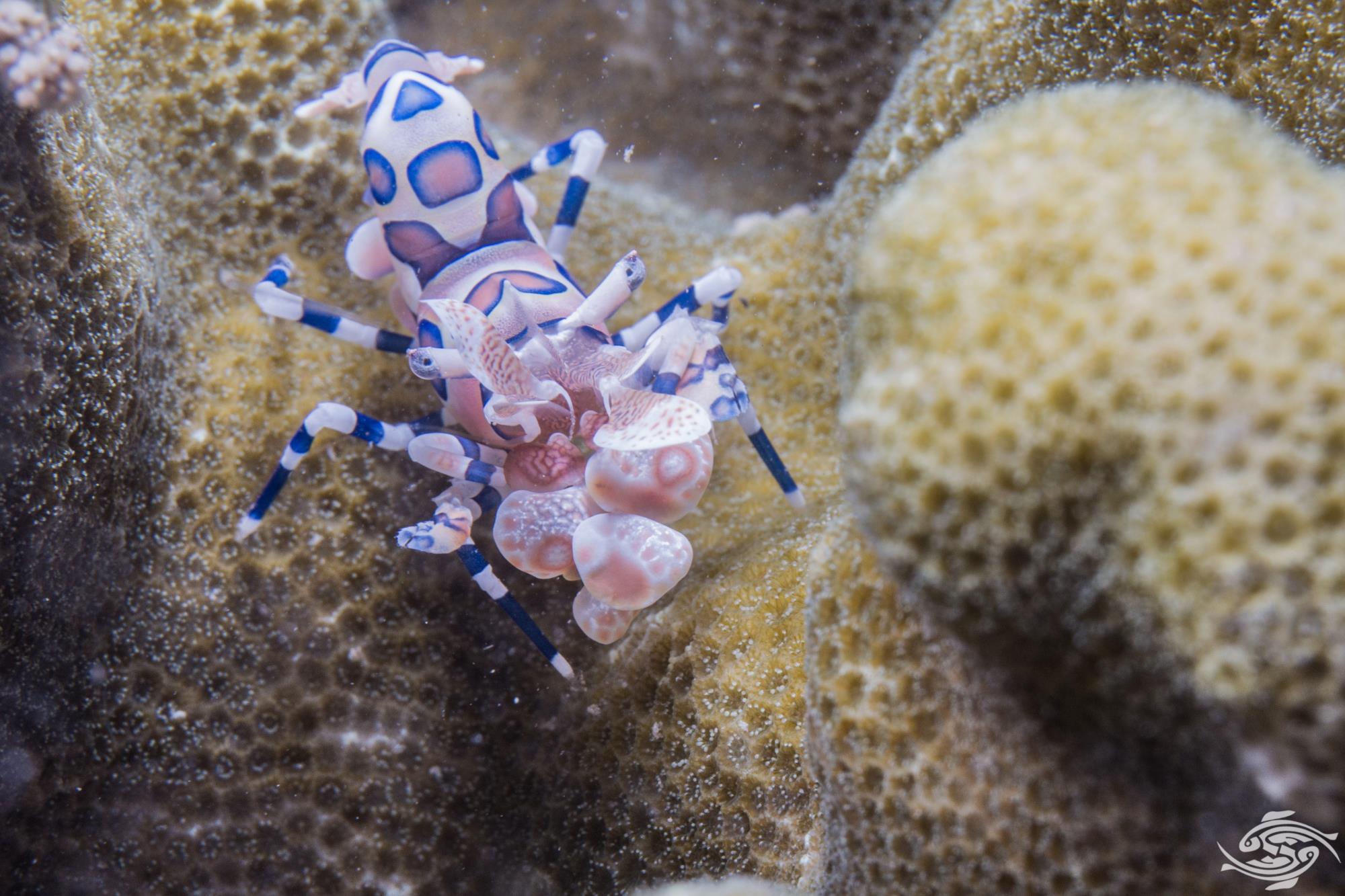 Harlequin Shrimp are collected for Marine aquariums and in some areas this collecting has substantially reduced the population.

Because of their almost unreal looks and their bright colouration they are kept by some enthusiasts. In order to keep them one has to have a supply of preferably live starfish for them to feed on.  For some people this can become expensive. One should provide them with a hiding spot that ideally faces the fron t of the tank otherwise you might not see much of them. They tend to only come out when there is food around or in the dark. 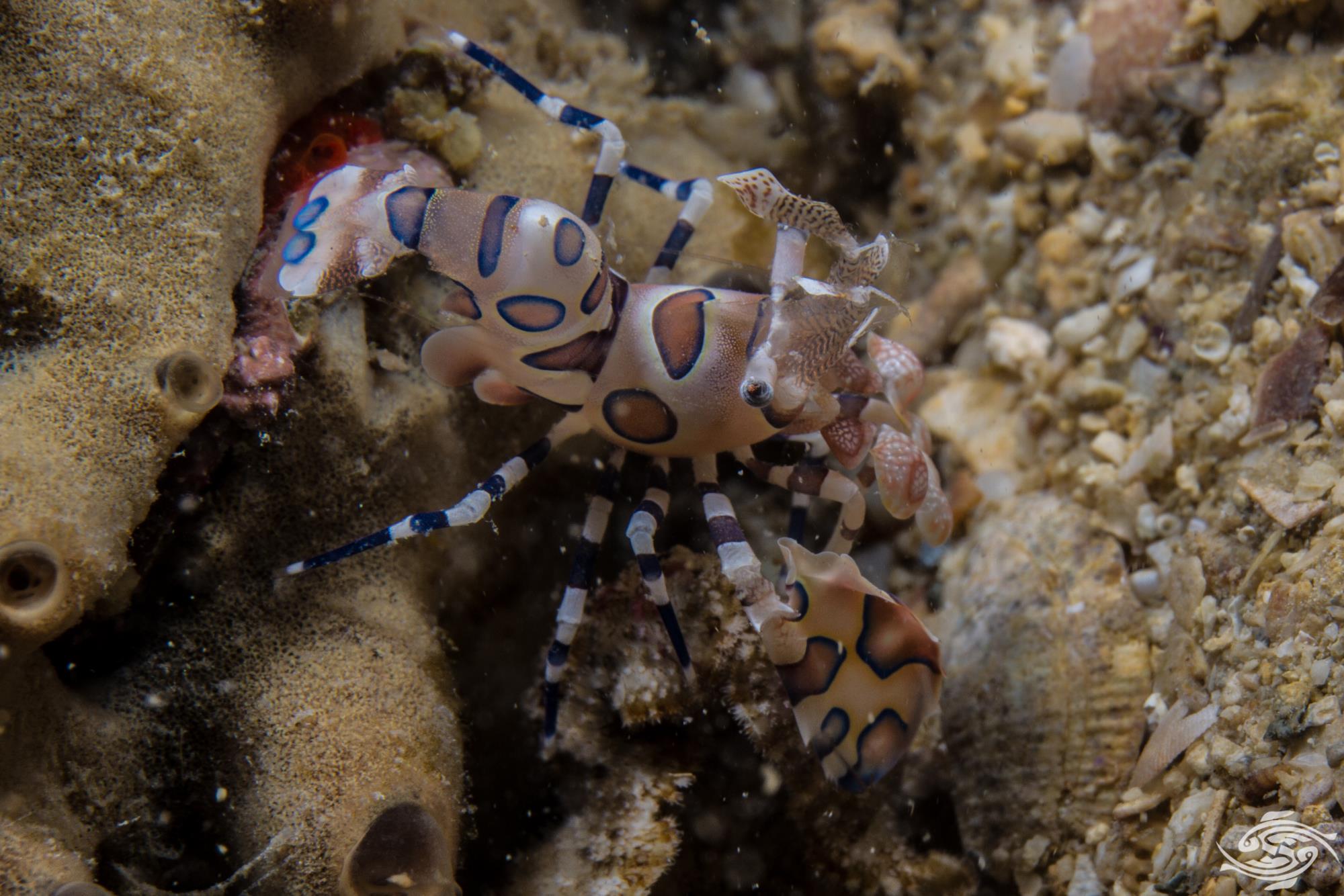