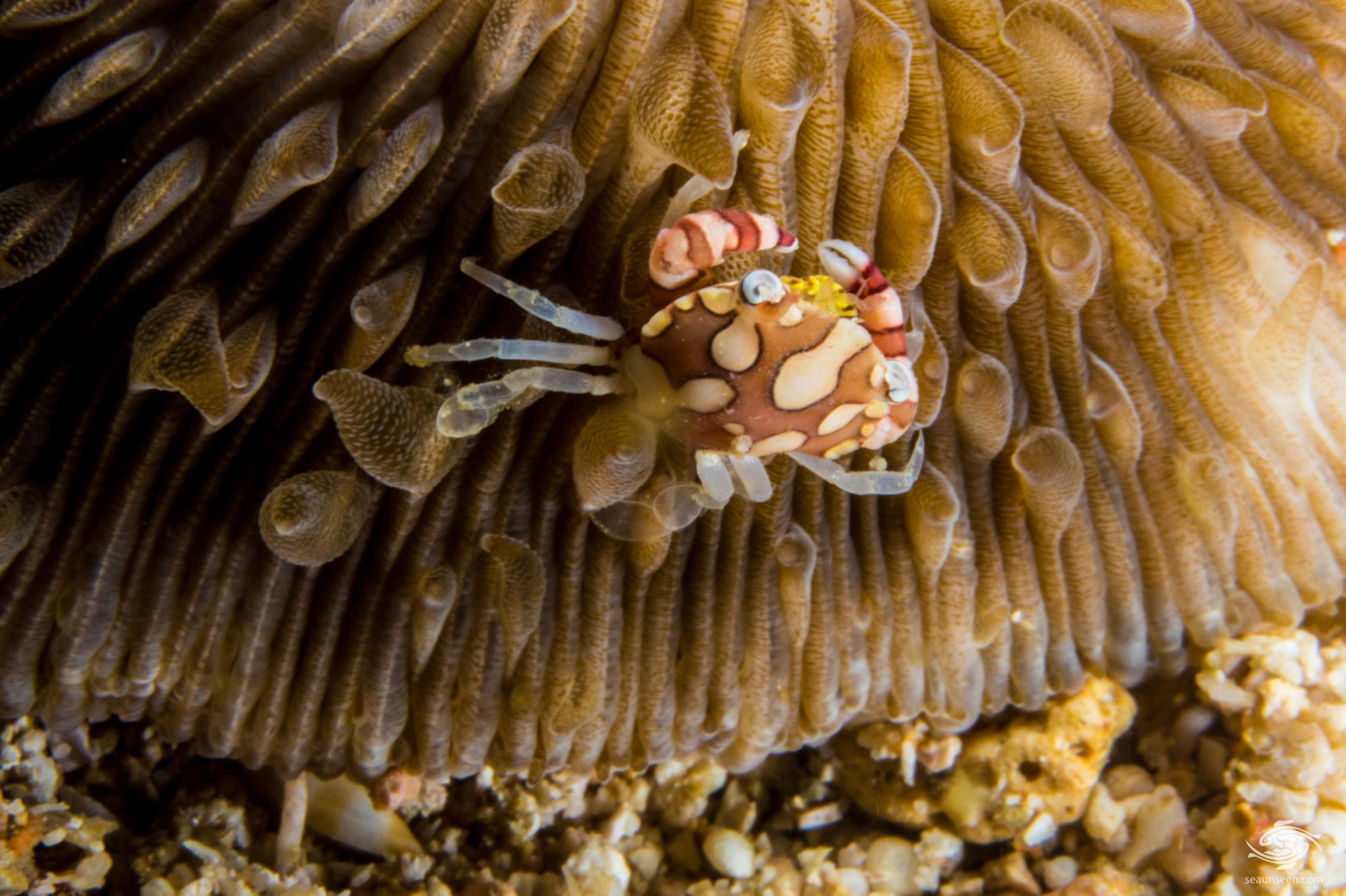 The Harlequin Swimming Crab, Lissocarcinus laevis is not easy to see because of its size and one has to look carefully to spot them.

They are decapod crustaceans in the Infraorder Brachyura, in the Portunidae family and are true crabs. They were first described by Edward J. Miers in 1886 with the type locality being in the Celebes Sea, south of Mindanao. The holotype specimen was collected on the voyage of HMS Challenger from 1873-1876 but the description was only published in 1886.

Harlequin Swimming Crabs have a light brown coloured body with large white to yellow dots which are inter connected  spread across the carapace. The main claws are banded with white and light brown. The body is wider than it is long and they grow to a width of 10.3 mm. The females are slightly larger than the males.  The rear legs are modified for swimming. 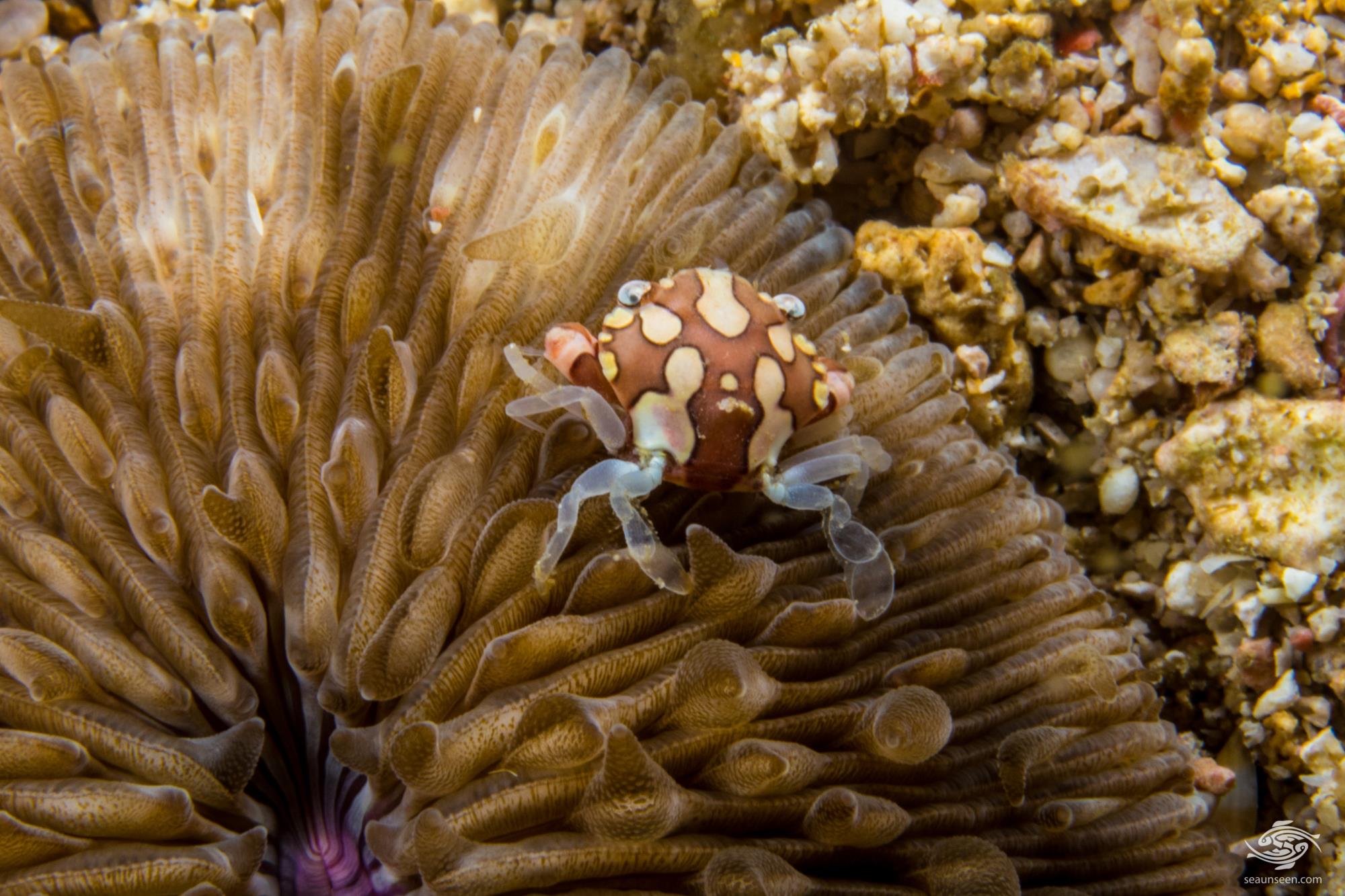 HARLEQUIN SWIMMING CRAB IN THE WILD

The Harlequin swimming crab is very difficult to spot despite its coloration , we usually see  them on the edges of anemones as pictured below and they are reclusive and hide under the anemone.  They have been recorded on cerianthid or tube anemones as well as live corals such as the Slipper Coral in the post images.

The exact nature of the relationship between the hosts and the crab is somewhat unclear, but RAJKUMAR RAJAN, C . VENKATRAMAN, G . SIVALEELA, D . PARANTHAMAN,
P. PADMANABAN and K . VENKATARAMAN record them as Facultative commensals.  This means that they have a symbiotic relationship with the host but they are capable of living apart. Quite what the symbiotic relationship is, no one seems to describe. Presumably the anemone provides protection and the crab removes parasites.

Although they are swimming crabs they do not seem to be recorded as swimming by anyone and we personally have never seen them swimming either. 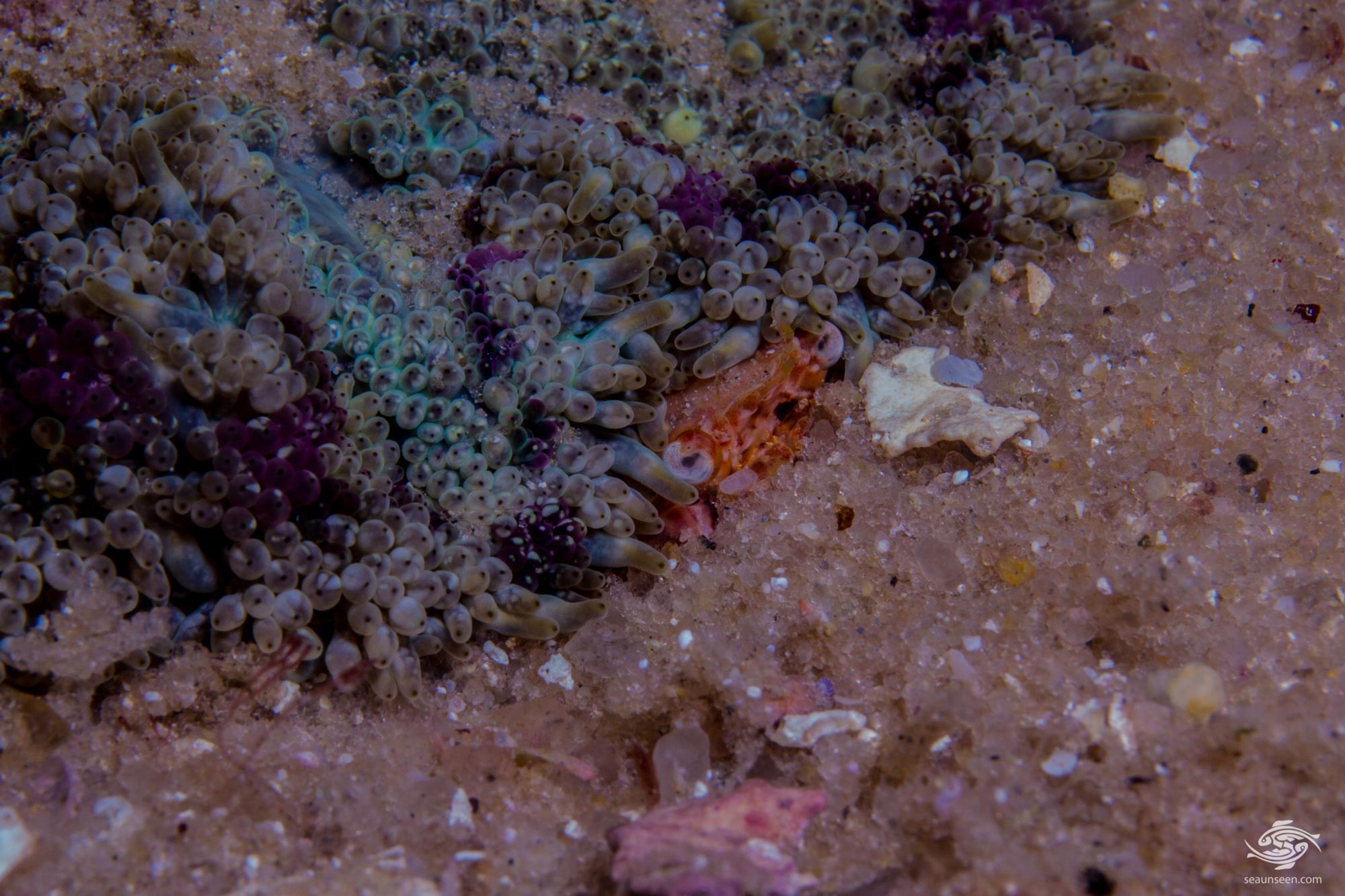 The Harlequin Swimming Crabs are found on coral and rock reefs across the Indo Pacific area. They have been recorded in  South Africa , Tanzania, the Red Sea and across to Japan and eastwards to at least French Polynesia. 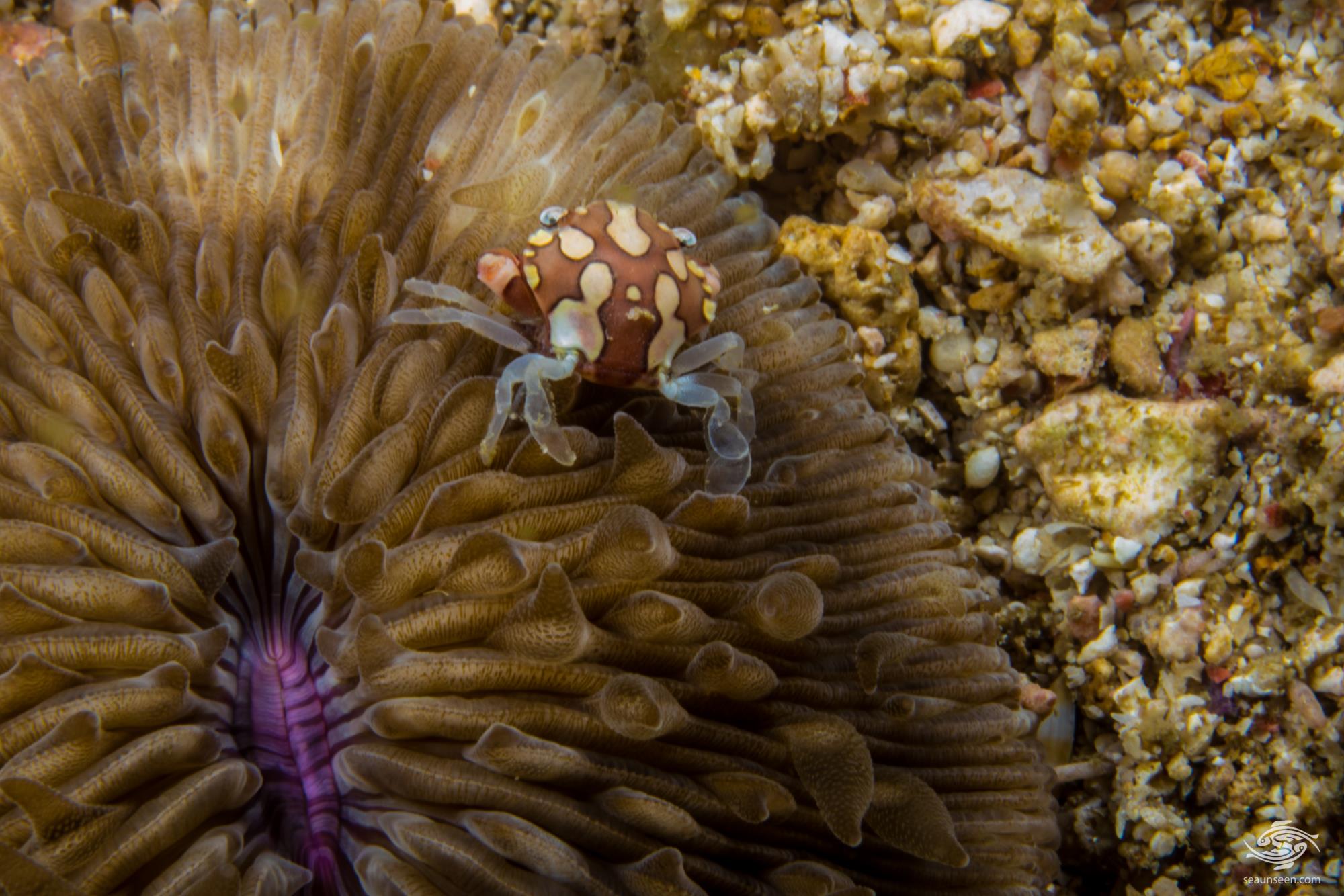 There seems to be no literature on the diet of the Harlequin Swimming Crab but presumably they remove parasites from their hosts. 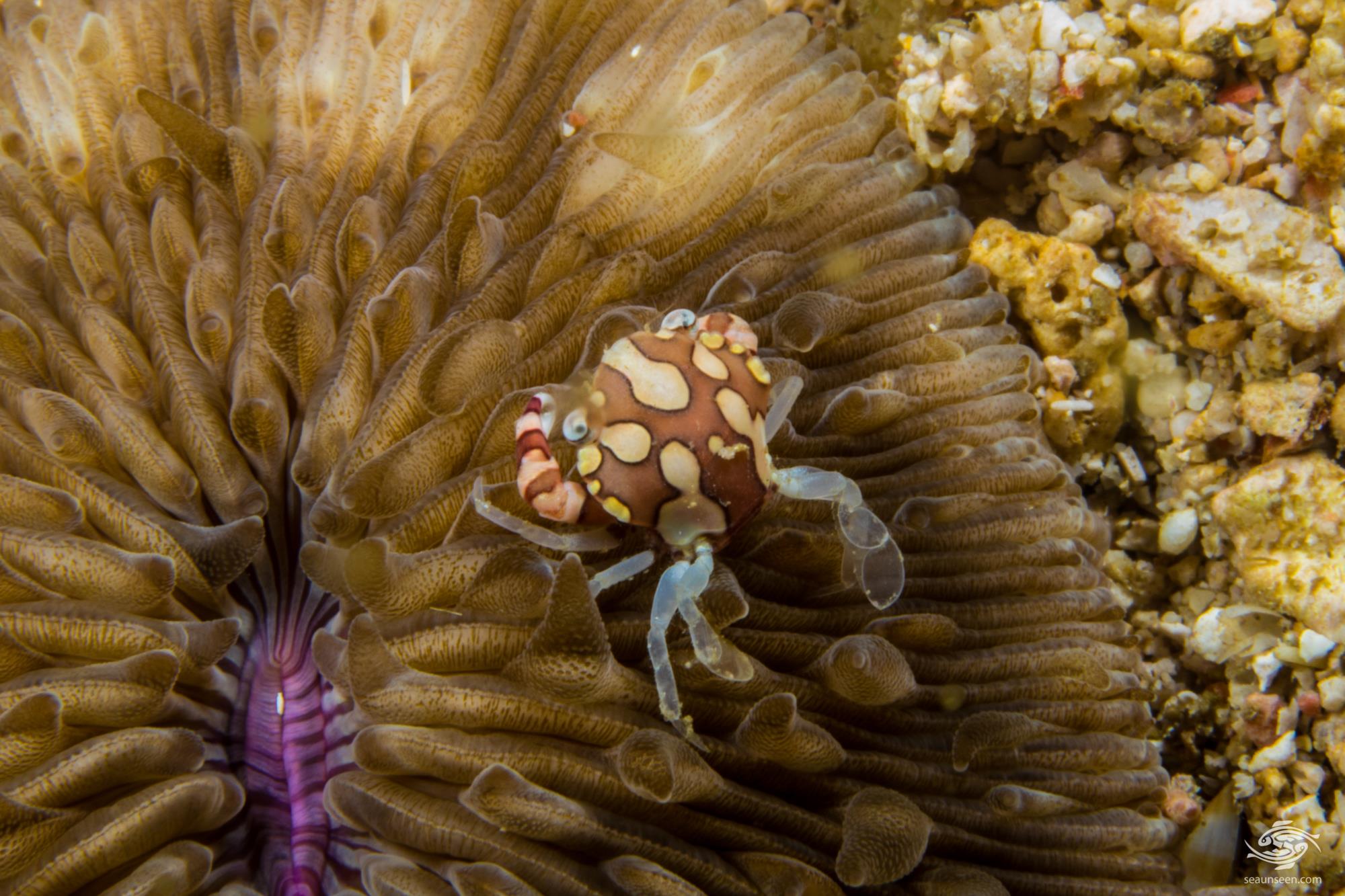 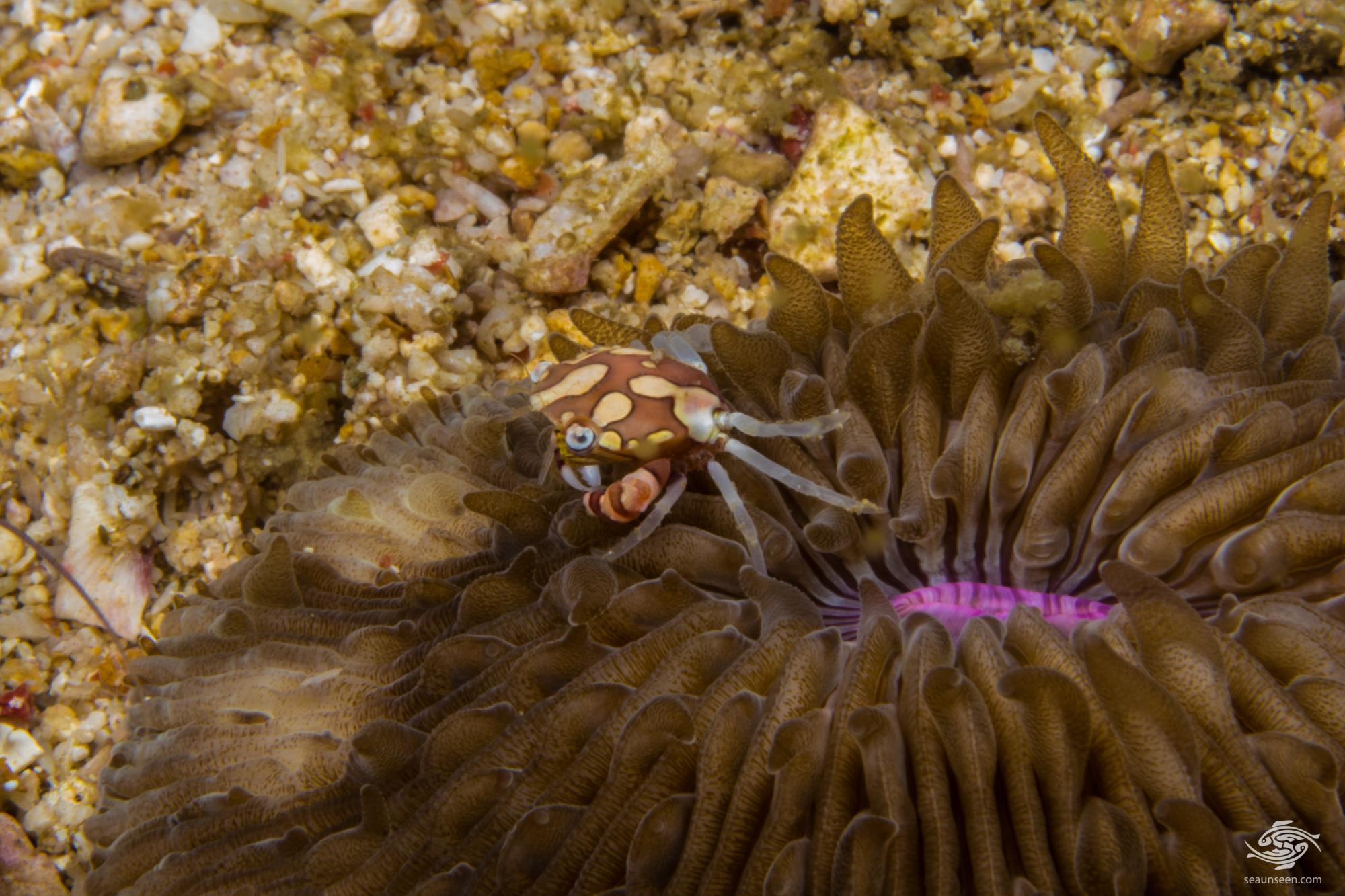 Harlequin Swimming Crab could possibly be kept in an aquarium, they are however not collected for the trade and there appears to be no literature on them in tanks.

Report on the scientific results of the voyage of H.M.S. Challenger during the years 1873-76 under the command of Captain George S. Nares and the late Captain Frank Tourle Thomson, R.N.