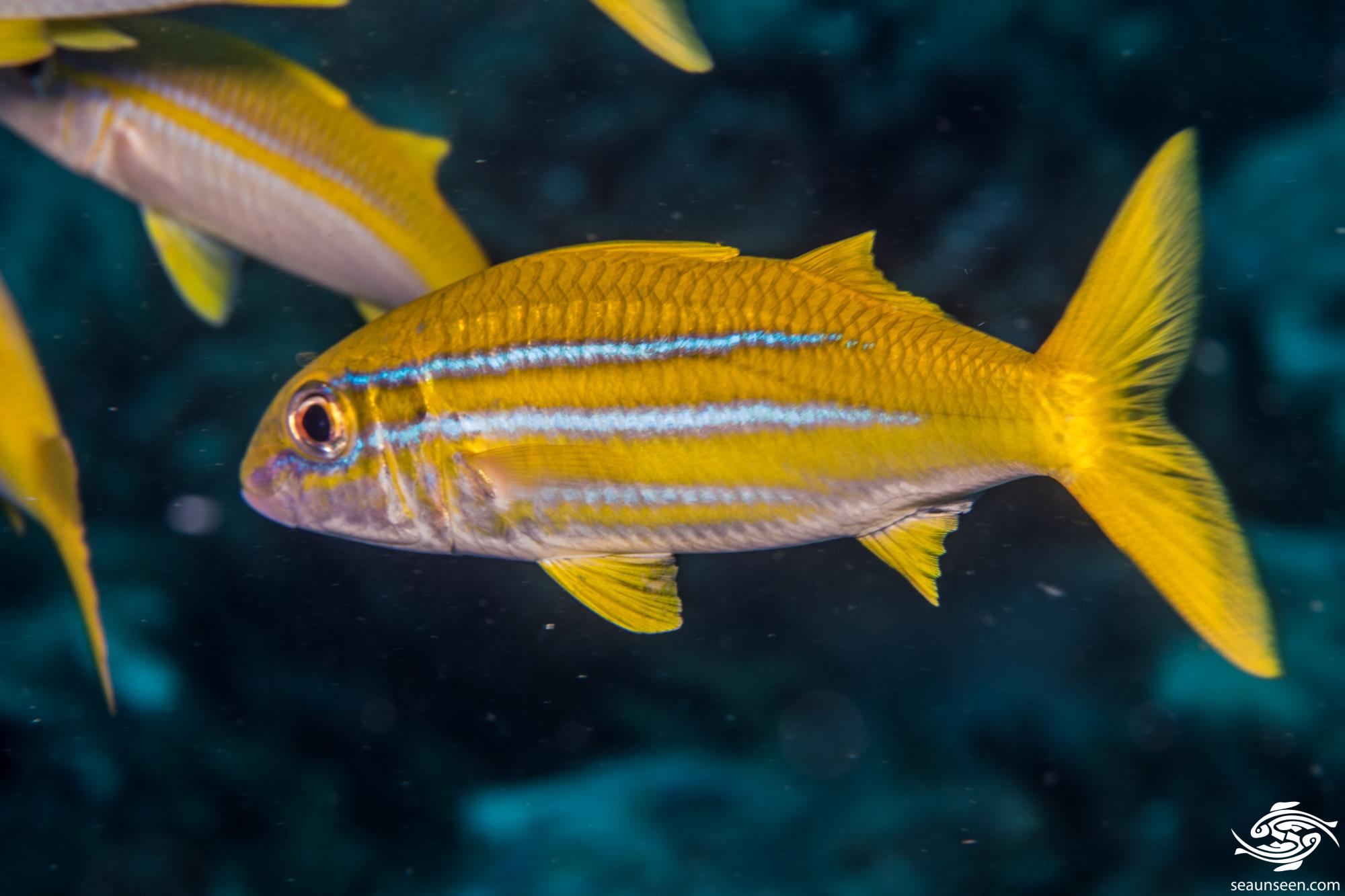 The Indian mimic goatfish (Mulloidychtys ayliffe) is also known as the Blue striped goatfish. They are not common in Tanzanian coastal waters  and are only occasionally seen. This probably as a result of extensive netting. Their habits differ from those of most other goatfish in that they are nocturnal feeders and form large shoals during the day for protection. This makes them vulnerable to netting.

They were only described in 2011 by Uiblein and were named after Neil Ayliffe a dive operator from Sodwana Bay in South Africa who noticed them and collected the holotype specimen. They are named as a mimic because they closely resemble the Blue lined Snapper (Lutjanus kasmira) and are reported to shoal with them.

Goatfish are distinctive looking fish and have a pair of retractable barbels or feelers that have sensory organs in them to detect prey. They all have proportionally long bodies with a deeply forked tail. 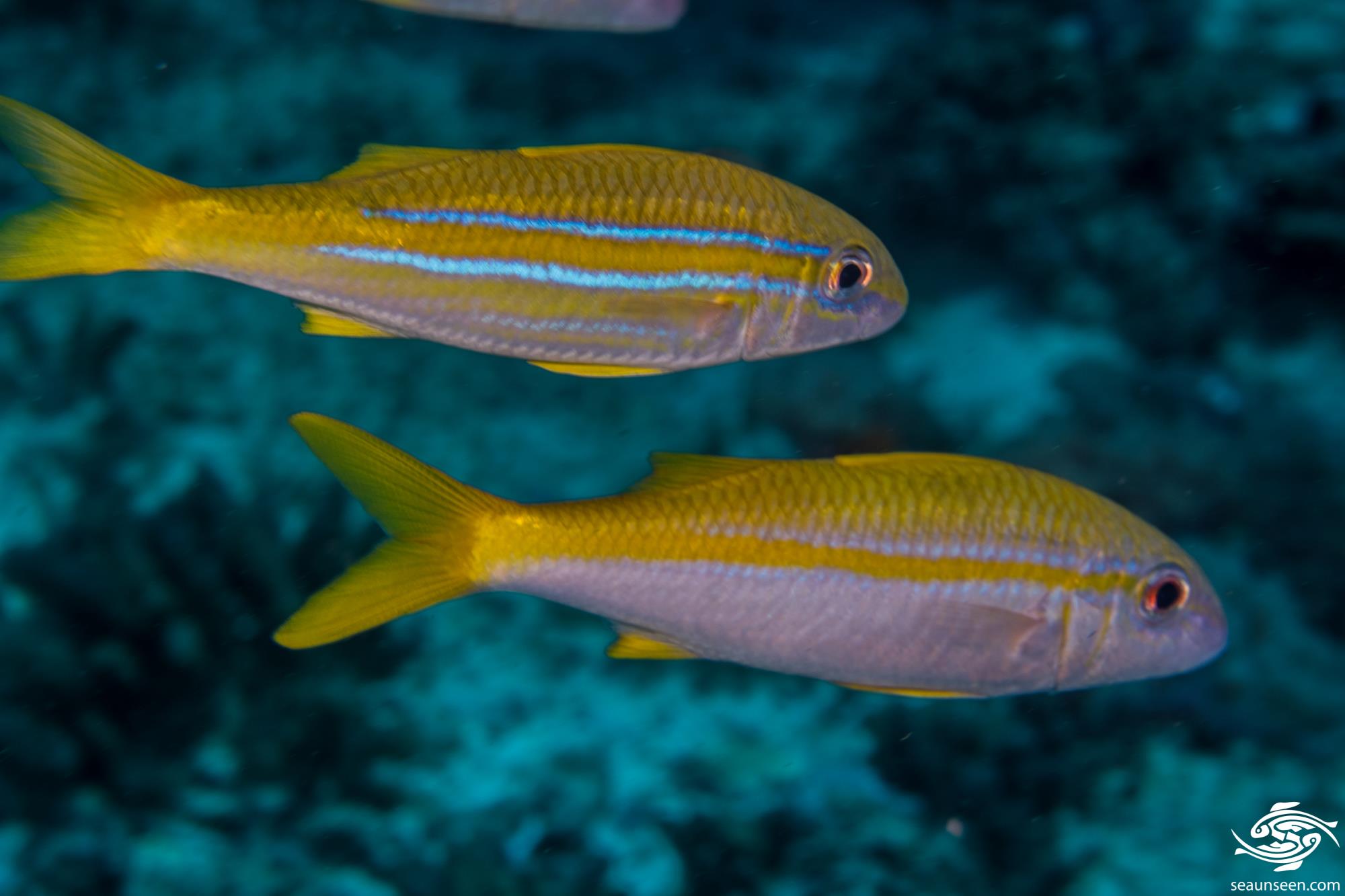 The Indian Mimic Goatfish has a slightly more streamlined shape compared to most Goatfish. The  body and  fins are a bright yellow gold color. There are three light blue stripes across the body and the belly is silver grey in color. They grow up to around 25 cm in length.  They are easily confused in a shoal with the Yellowfin goatfish (Mulloidychtys vanicolensis)

In the image above the Indian Mimic Goatfish is the upper specimen and the Yellowfin goatfish (Mulloidychtys vanicolensis) is below. 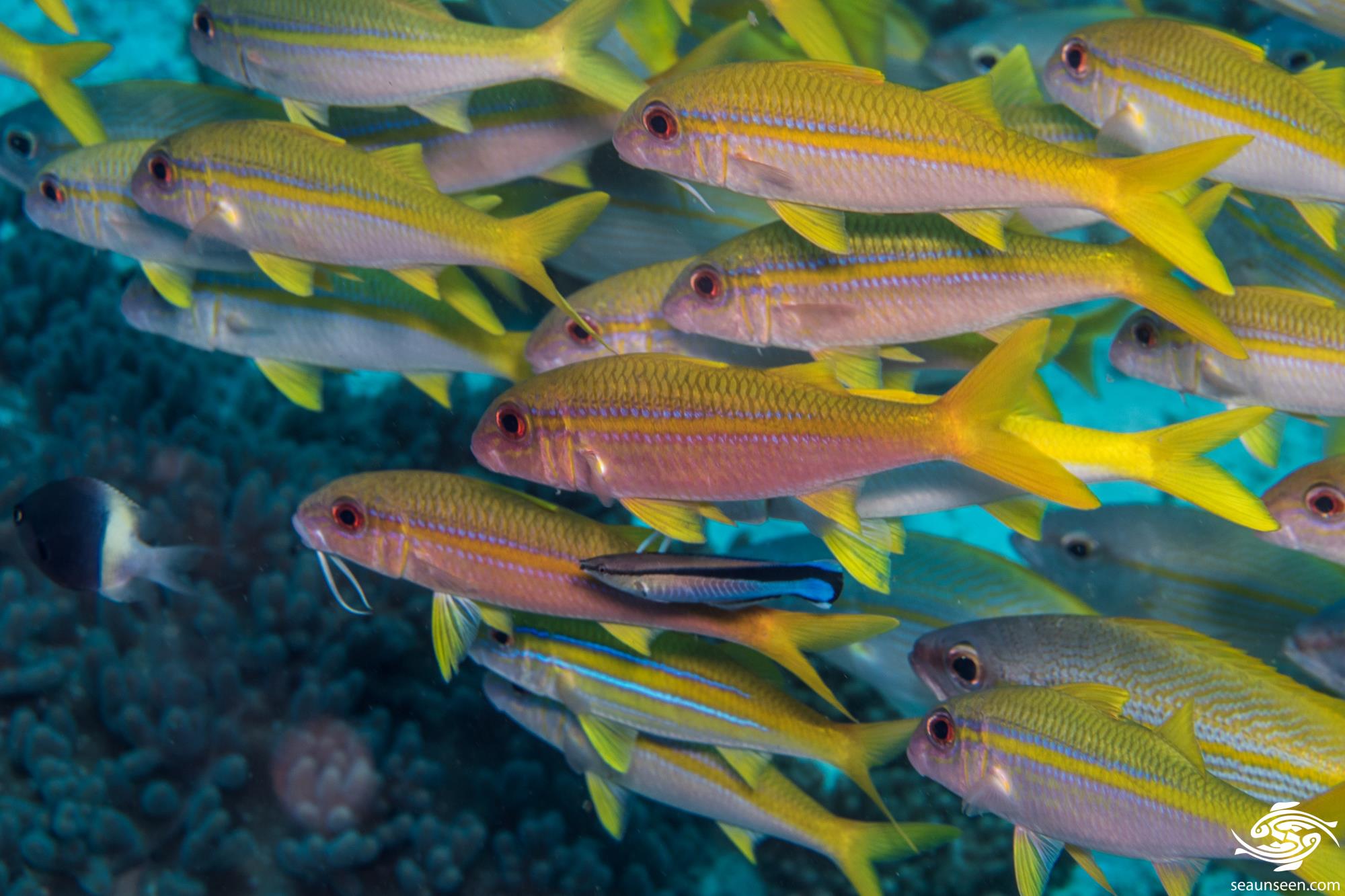 INDIAN MIMIC GOATFISH IN THE WILD 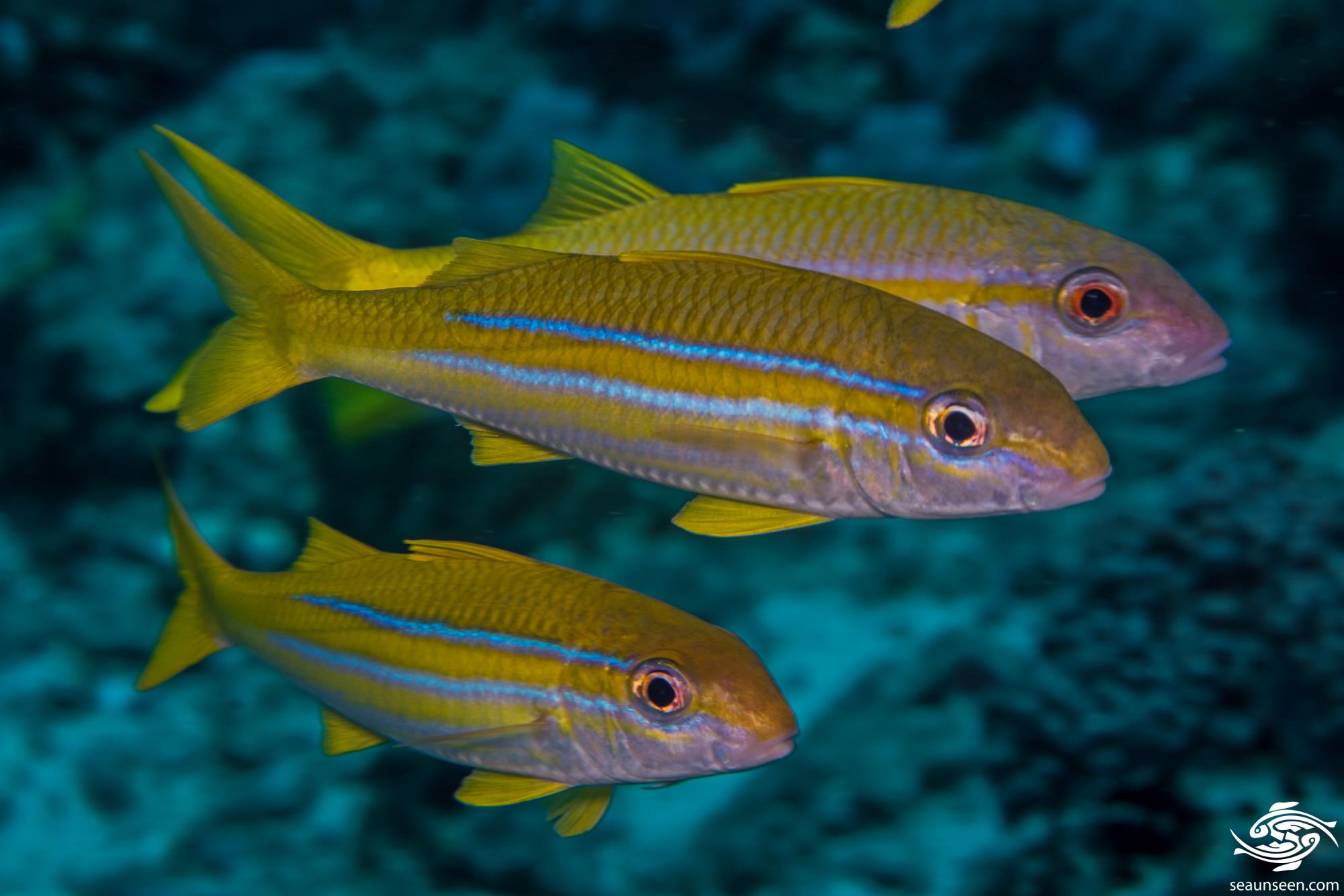 The Yellowfin goatfish is found across the Indo Western Pacific  Ocean from South Africa north to Kenya and across to Oman , Seychelles and Sri Lanka. 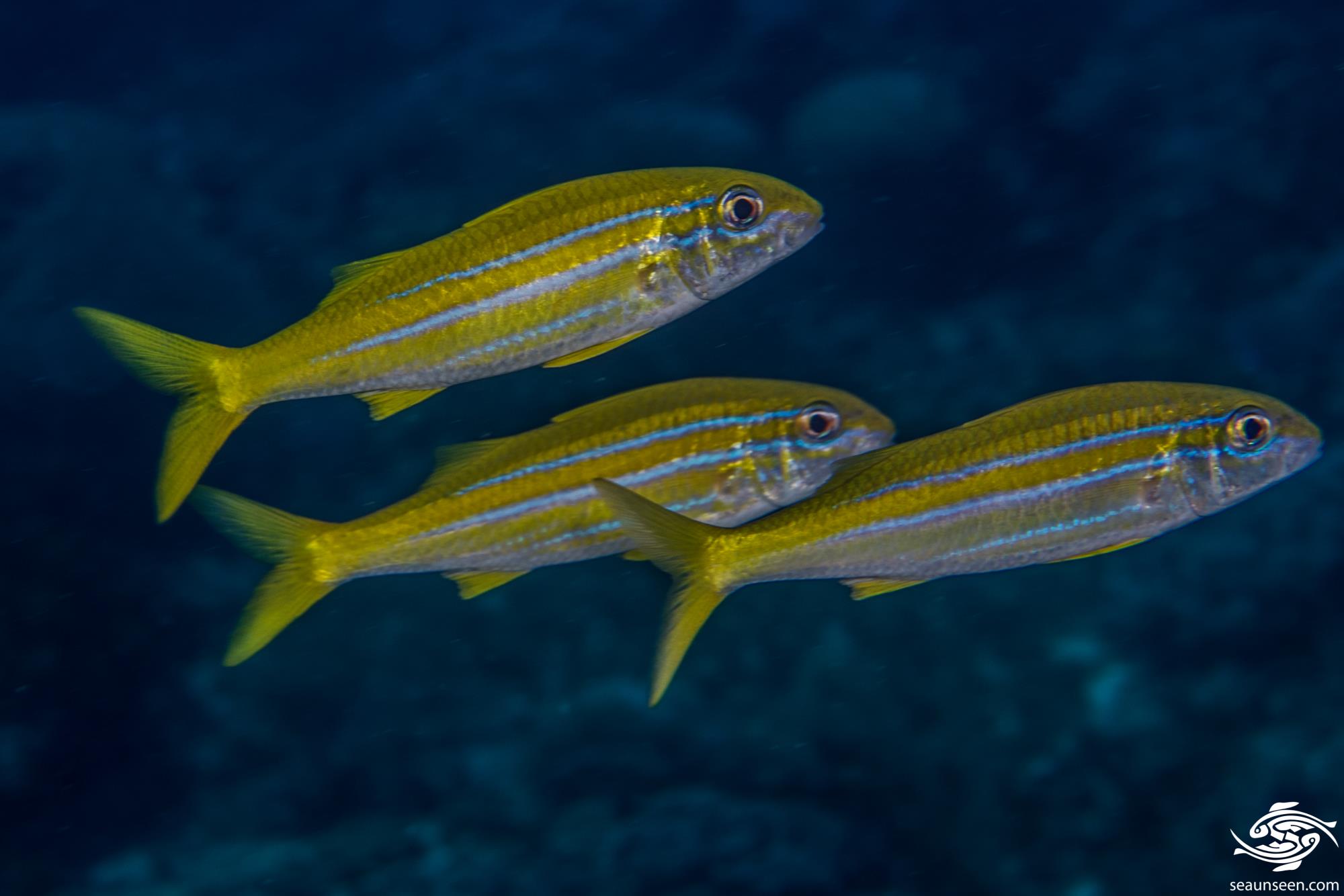 The Yellowfin goatfish feed on worms and small crustaceans. During the day they swim above and just off the reef, however at night the descend onto the substrate to hunt for food. Once they begin searching an area the comb it quite meticulously with their barbels. The barbels are quite prehensile and they have a large degree of control over them. Both seem to operate independently and if they allow one to get close while feeding, it is quite interesting to watch them.

Little is known of their breeding habits but their eggs are released into the substrate and they have a long larval period. Once the barbels begin forming they become benthic.  During spring in Dar es Salaam we have noticed some specimens in a shoal go a reddish brown color which may be mating related. 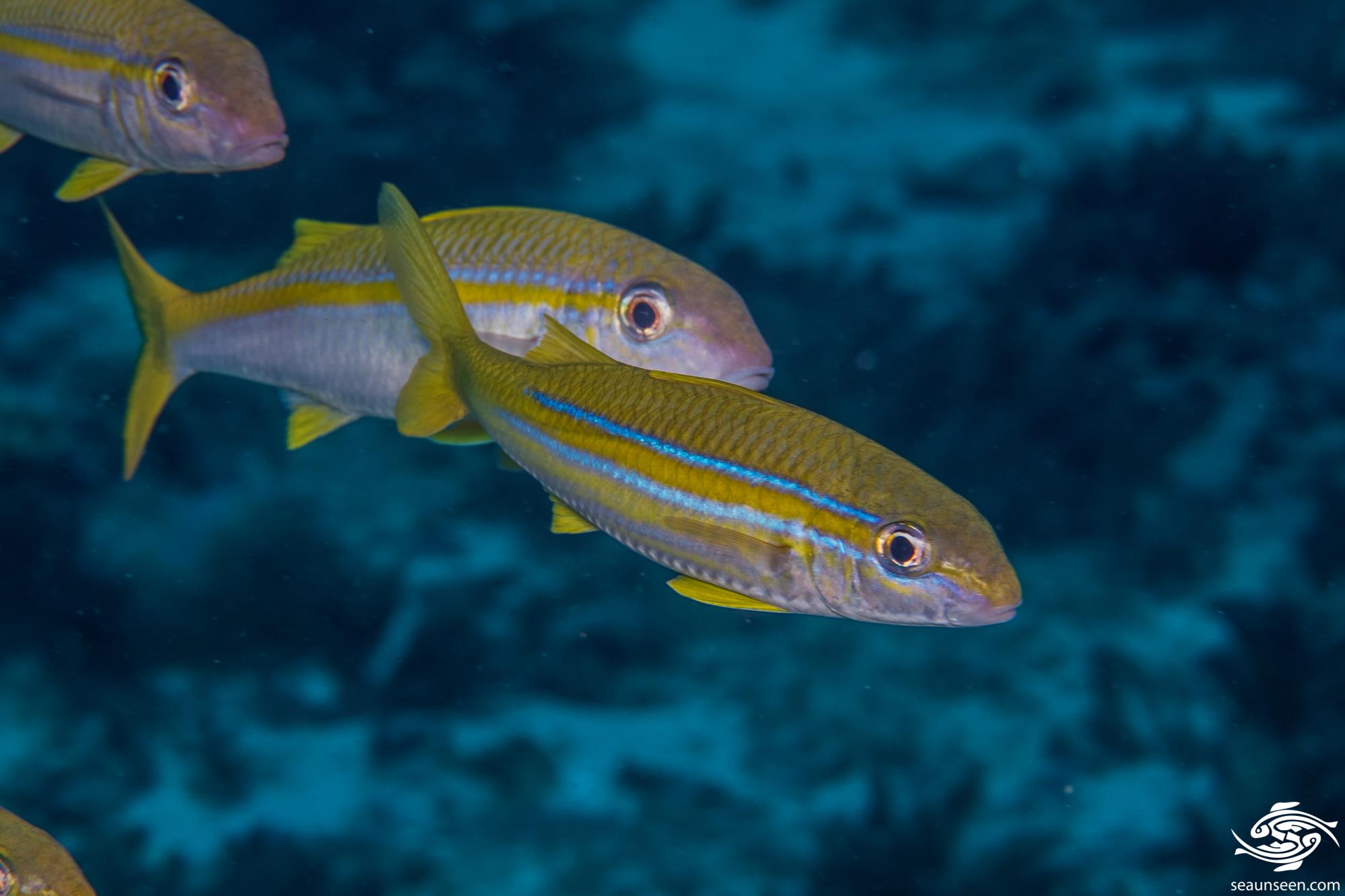