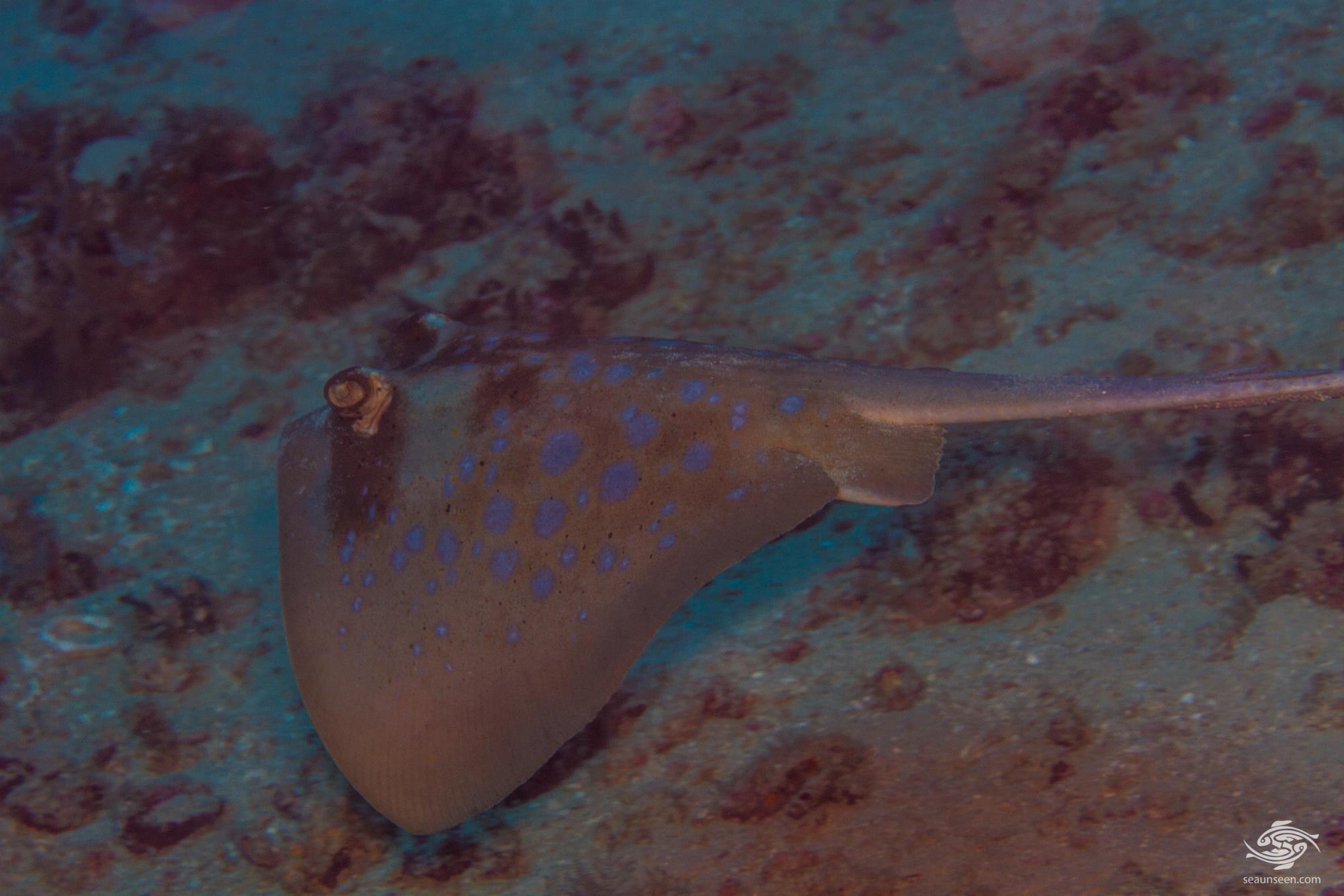 The Indian Ocean Blue-spotted Stingray ( Neotrygon indica sp. nov) is also known as the Indian Ocean Bluespotted Maskray. They are common inhabitants of the reefs on the Tanzanian coast but are extremely skittish and unless they are buried in the sand, are very difficult to get close to.

Previously they were classified as Neotrygon Kuhlii which had an Indo-Pacific Range but after DNA testing the species was split into eleven different species, the Indian Ocean Blue-Spotted Stingray being one of these. They are yet to be fully described, hence the N. indica.sp.nov classification. Rays are closely related to sharks and they have cartilaginous skeletons rather than bone and they have no swim bladder.

To the casual observer they resemble the Bluespotted Ribbontail Rays, however their coloration is more vivid and as their name suggests, the tail is very different.

The Indian Ocean Blue-Spotted Stingray have a browny grey green to light brown coloured body with a prominent set of eyes that protrude above the body. Most specimens have dark markings across the eyes, hence their common name of masked ray. The center of the body is covered in  blue spots of varying sizes and each individual has its own pattern of spots. The eyes are a dull yellow colour and as with all rays they have the ability to change the size of their pupils.  The pectoral fins form the disc of the ray and towards the rear of the body below the disc are the smaller pelvic fins.

The tail extends back from the disc and has prominent black and white markings on the end. Towards the rear of the tail on the upper surface are two spikes which have venom that can deliver a very painful sting. These can be seen pictured in images below.  Alongside the eyes are two spiracles which are used to take water in and to push it over the gills. The underside of the body where the mouth is situated is a grey- brown colour. They grow to 75 cm in width and up to 80 cm in length and weigh up to 3 kg. 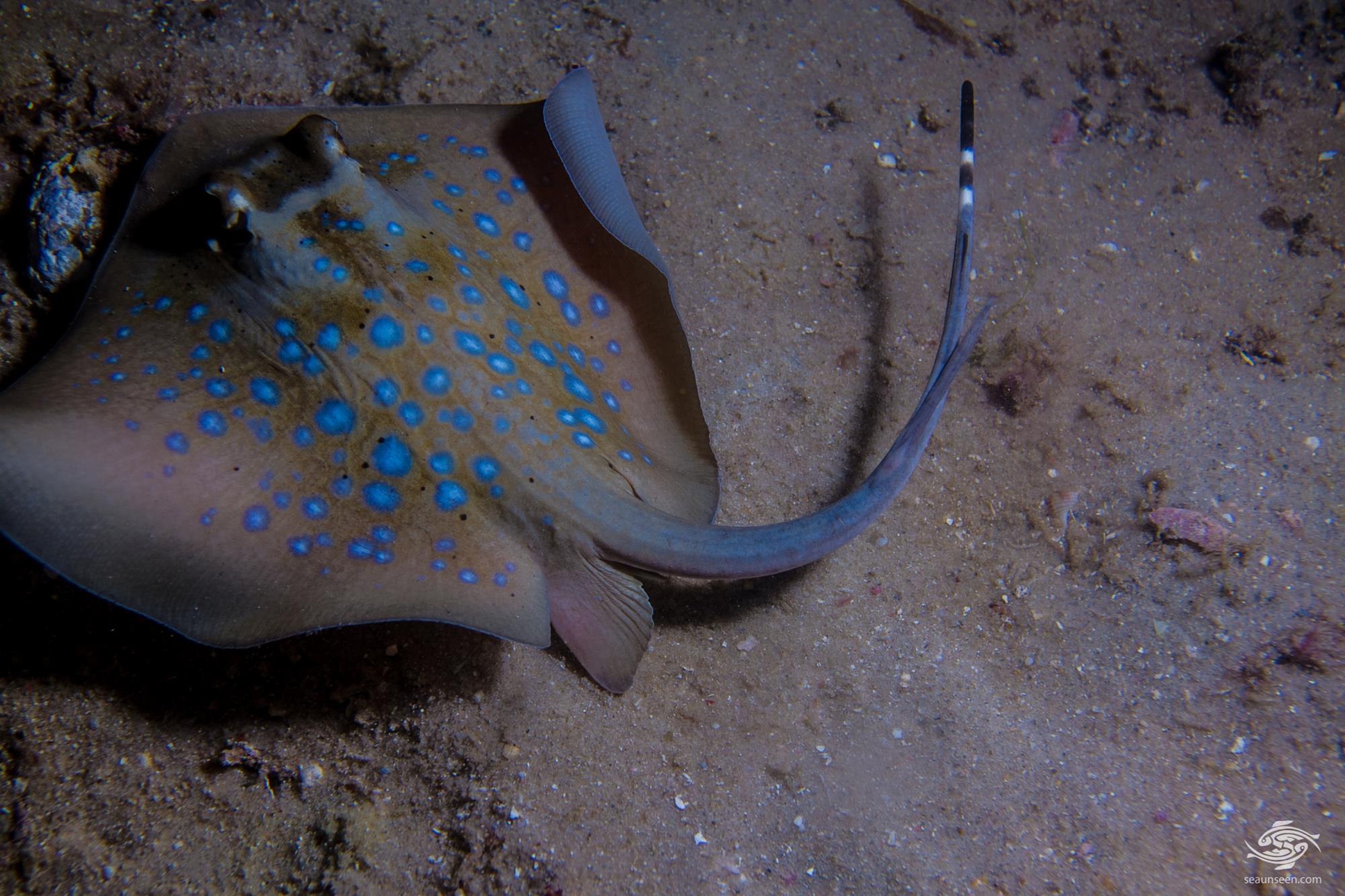 BLUESPOTTED STINGRAY IN THE WILD

The Indian Ocean Blue-Spotted Stingray is often seen hiding in the sand during the day on the Tanzanian coast. Once dug into the sand they usually seem to feel quite secure and trust on their camouflage. One can usually get really close to them, however on a pretty regular basis one will see a cloud of sand and a ray taking off for no apparent reason. If they are in the open they are extremely skittish and will take off at high speed swimming low in a zig zag pattern just above the substrate. 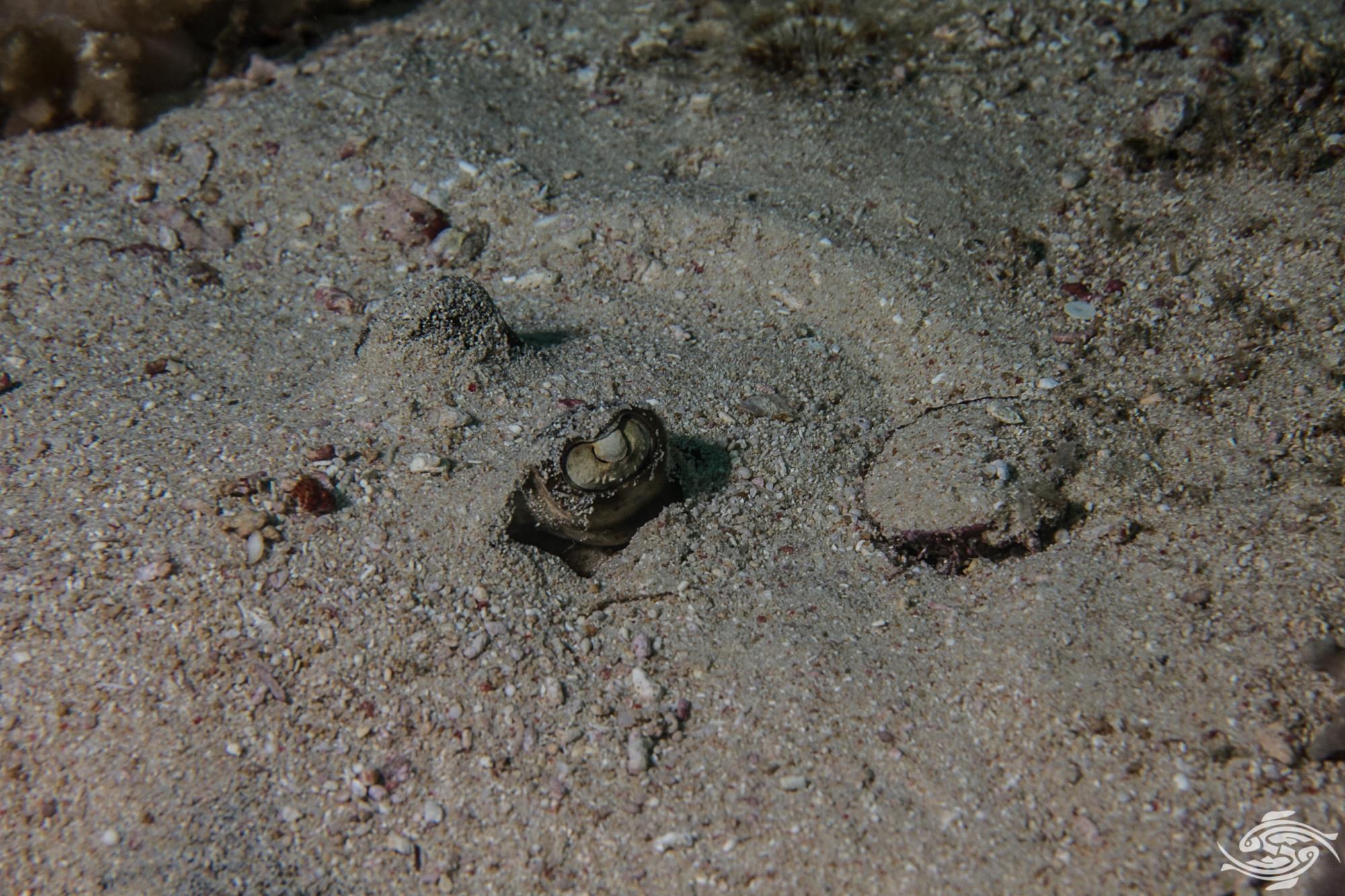 The Indian Ocean Blue-Spotted Stingray as it is now classified is found from the South and East African coasts across to India. They are found between depths of 2-30 meters. 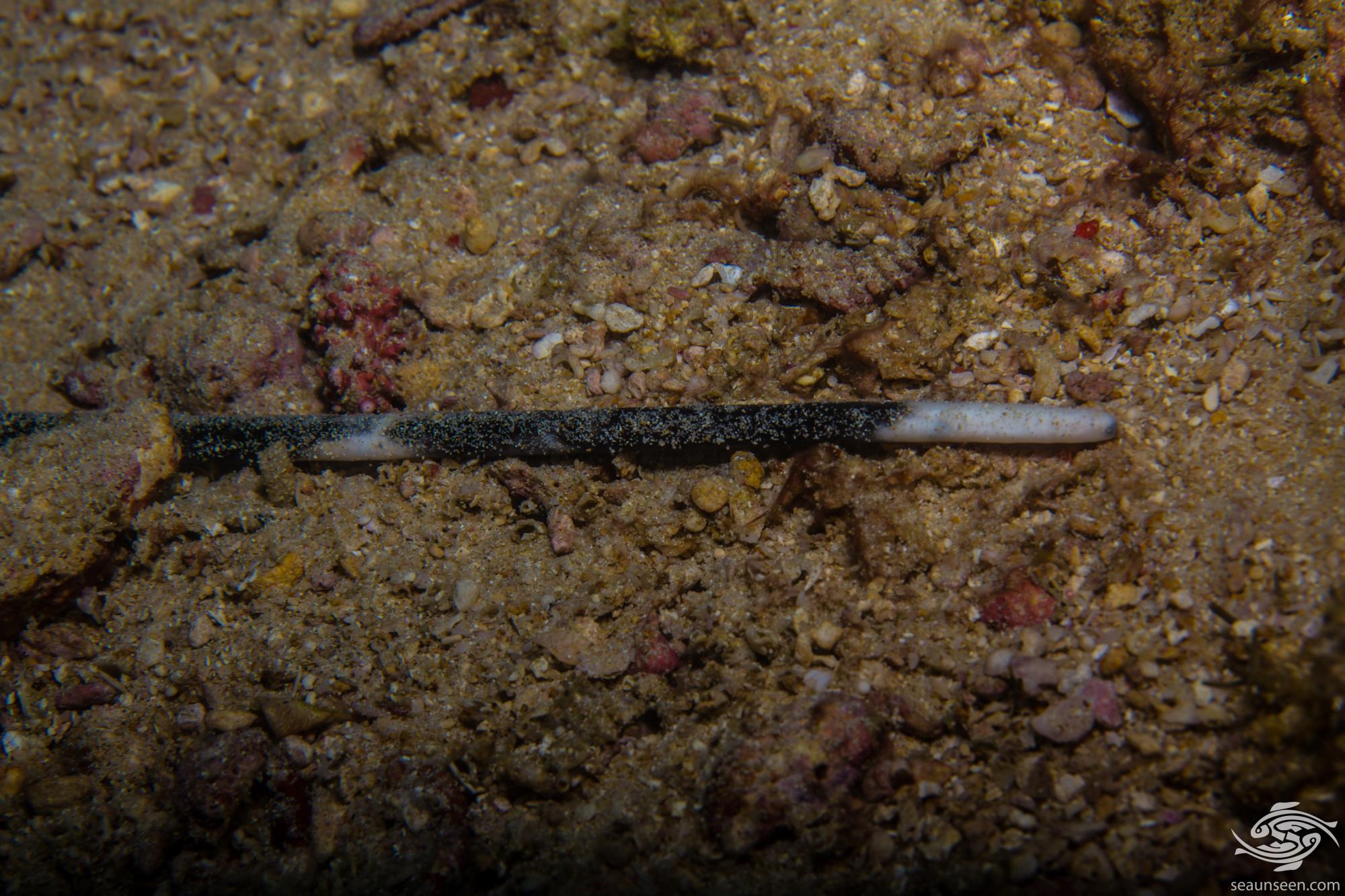 The Indian Ocean Blue-Spotted Stingray are nocturnal feeders , feeding on molluscs, polychaete worms, shrimps, crabs, and small benthic fishes. They have highly developed electromagnetic sensors and lateral lines which allow them to detect their prey hidden in the sand. Once found they envelop the prey with their disc and use their powerful mouths to crush them. 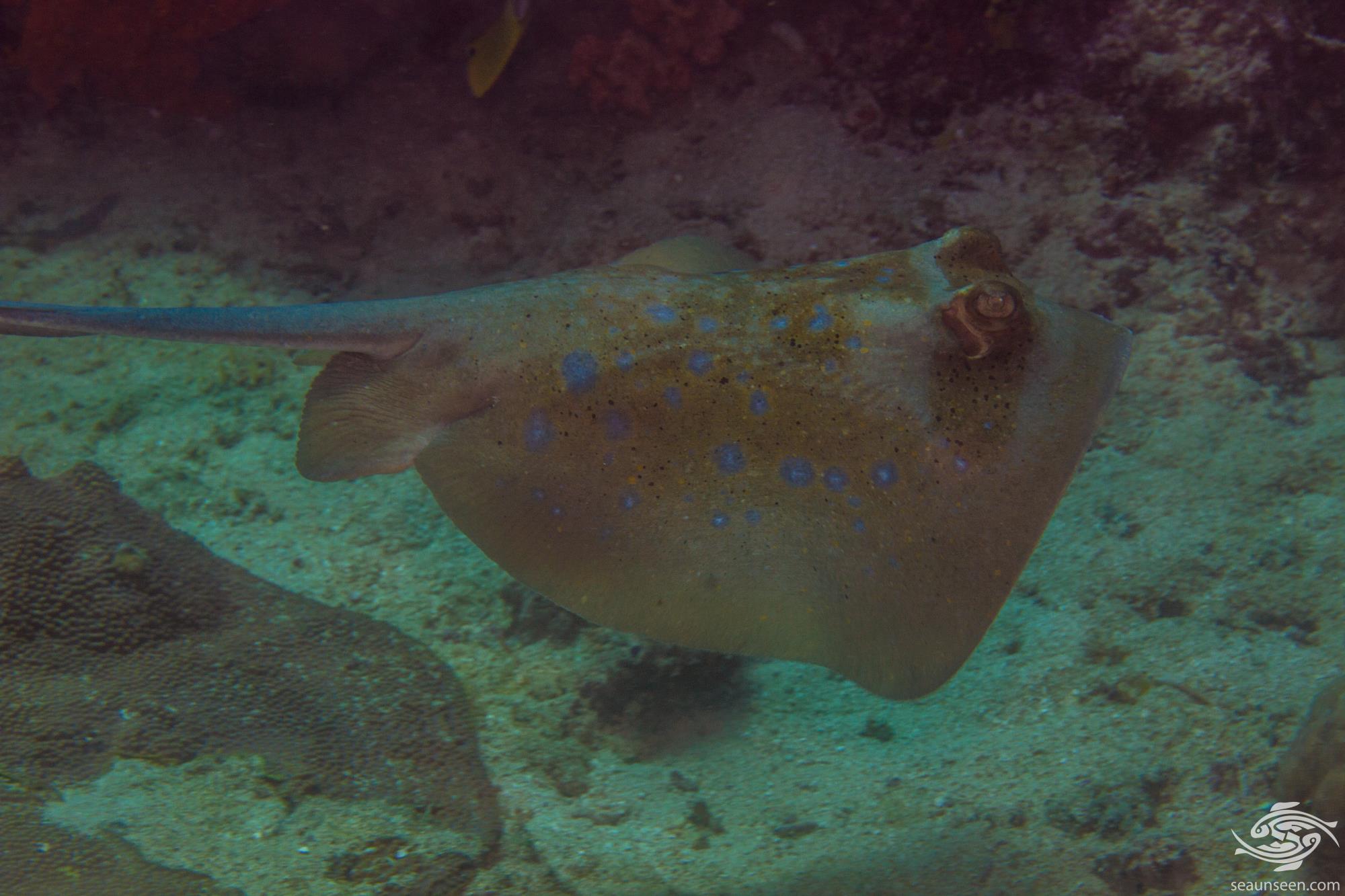 Indian Ocean Blue-Spotted Stingray exhibit Ovoviviparity  or aplacental viviparity. This means that although internal fertilization occurs, individuals develop sustained by yolk rather than a direct placental connection.  Additional nutrition is obtained from uterine secretions known as histroph. When fully developed the females give birth to between four and seven young. The young are approximately 12-14 cm wide and are fully developed. 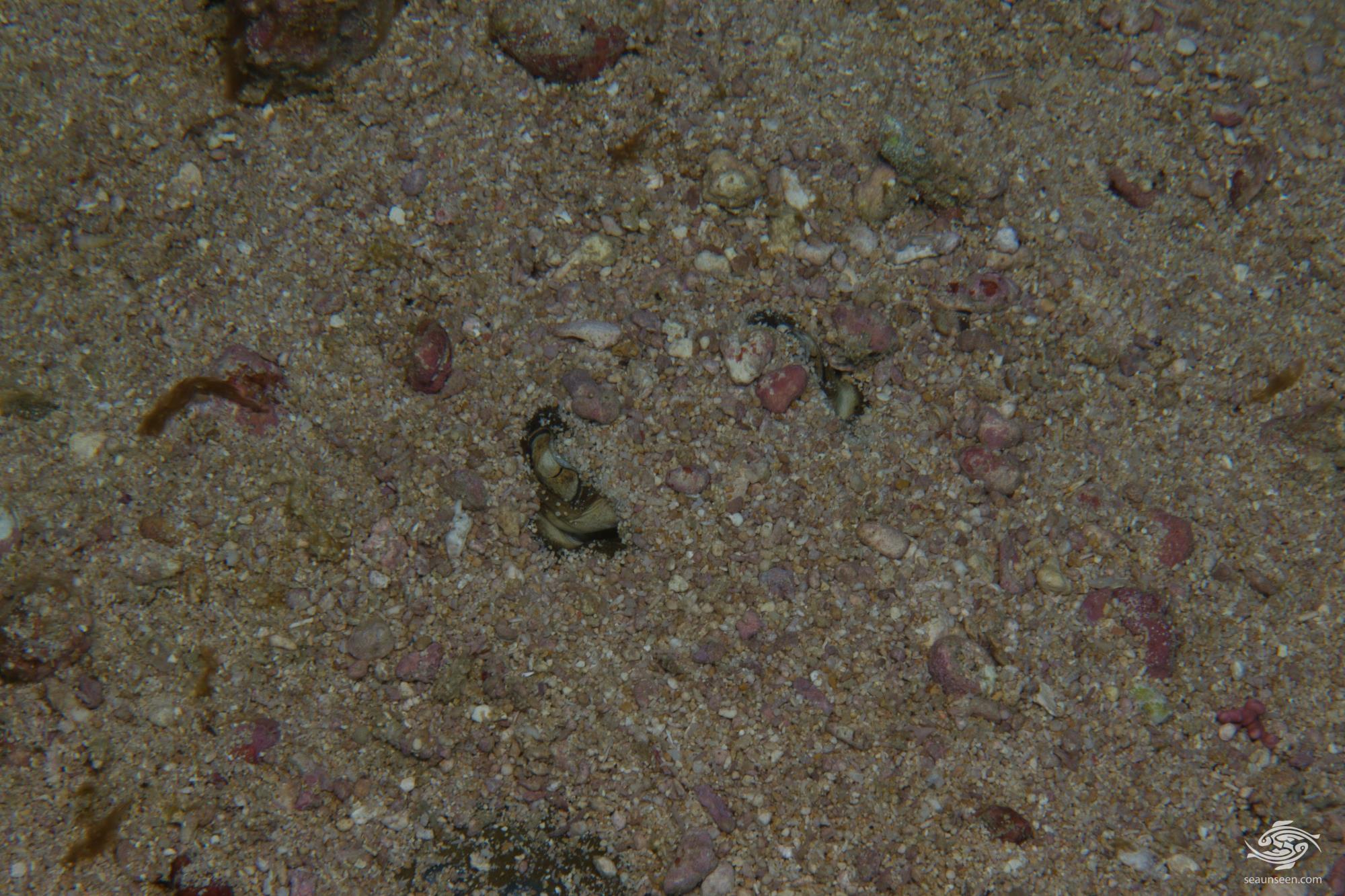 Although the Indian Ocean Blue-Spotted Stingray are placid and almost never attack divers their sting should not be underestimated. Their tail has either one or two spines on it which have venom in them. These can be seen pictured below. They can give an extremely painful sting and one should always stay clear of rays.  Never swim above one or to the side is the rule.

The treatment for such a sting would be hot water as hot as one can take it in the affected area. Aside from the venom the spines are capable of giving a deep physical injury which can be life threatening. Best to stay well clear of any ray. 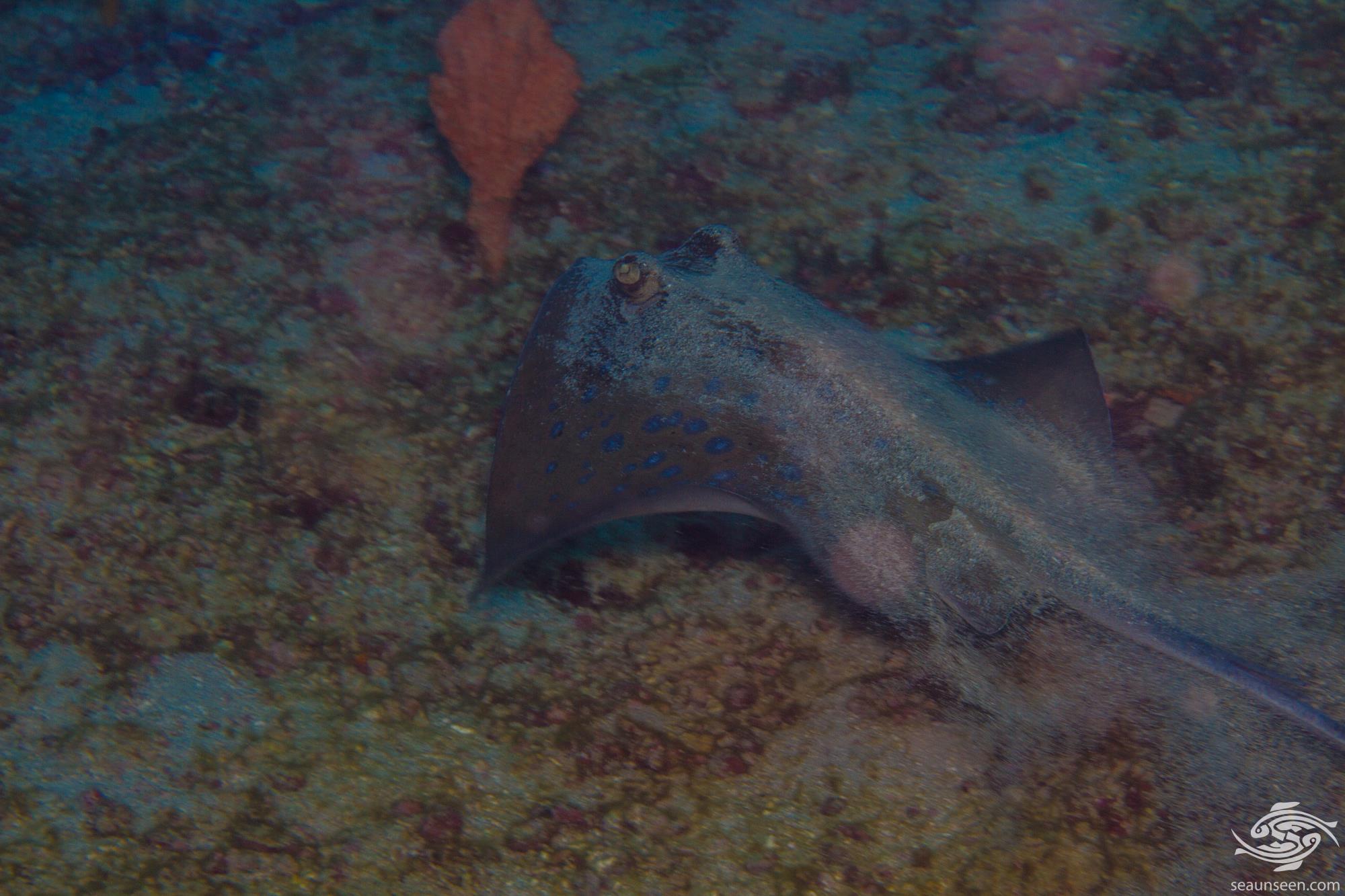 The Indian Ocean Blue-Spotted Stingray are caught and eaten in Tanzania by subsistence fishermen. 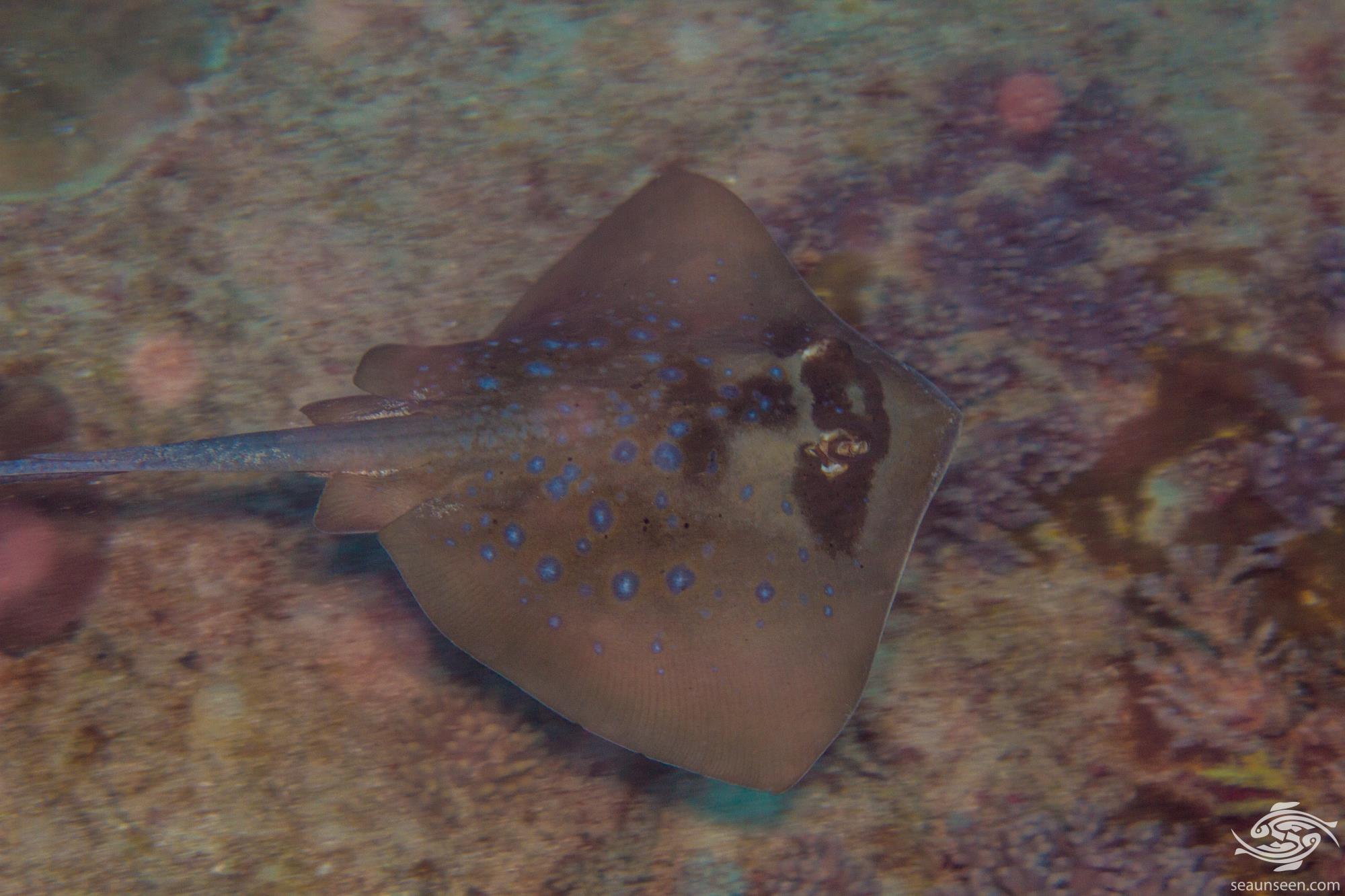 Indian Ocean Blue-Spotted Stingray are not normally kept by aquarists. Some Public aquariums with large tanks have succeeded in breeding them. 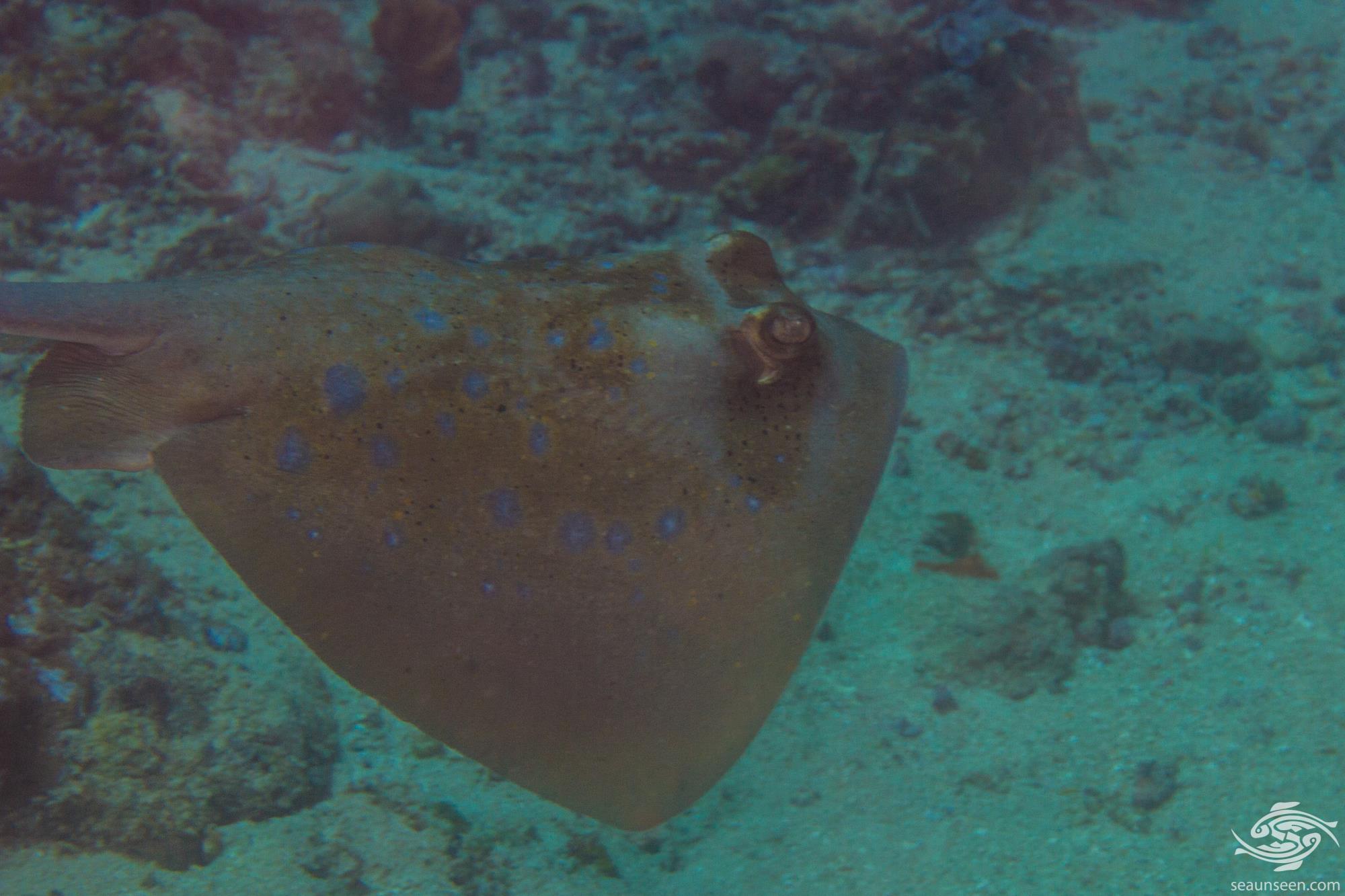