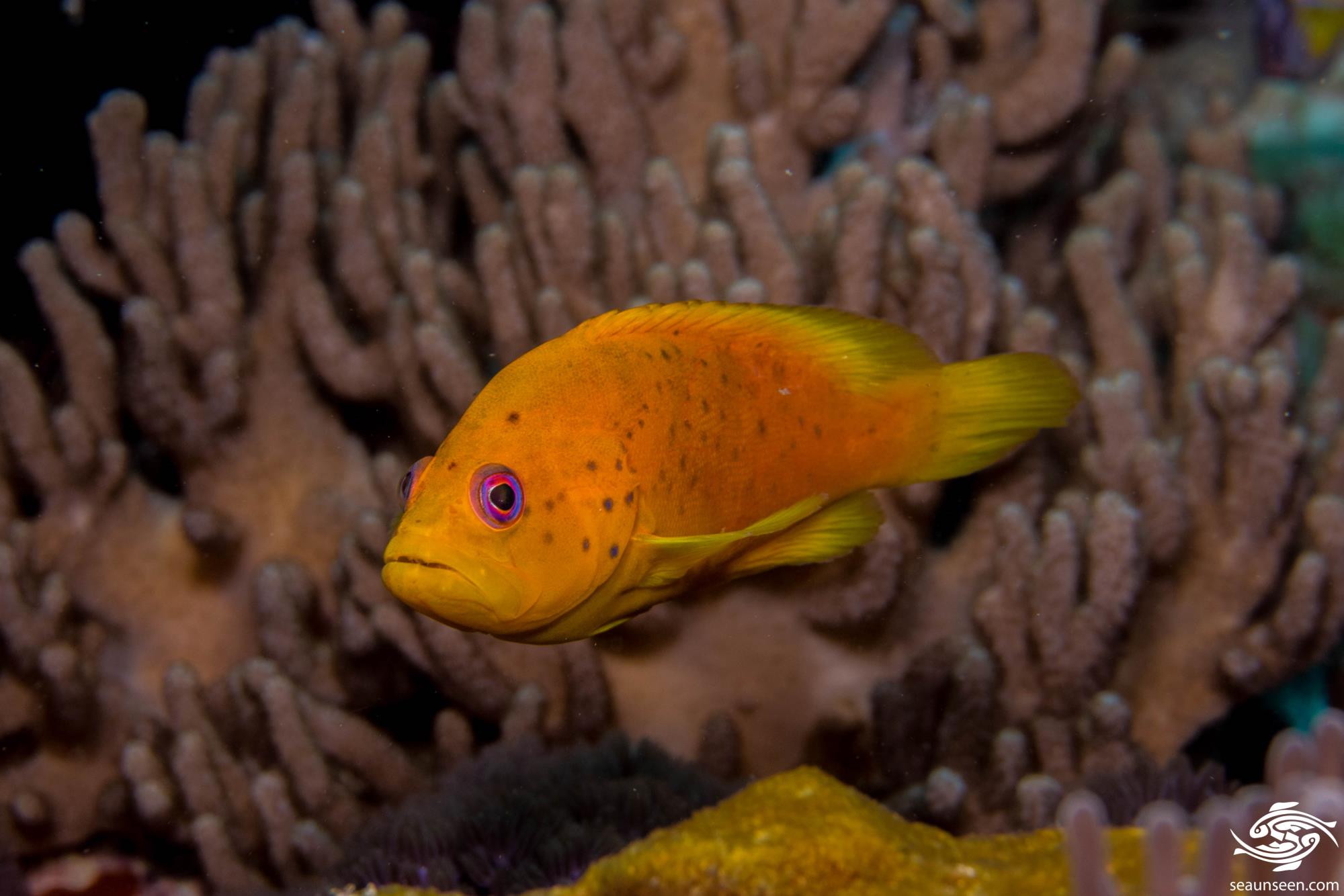 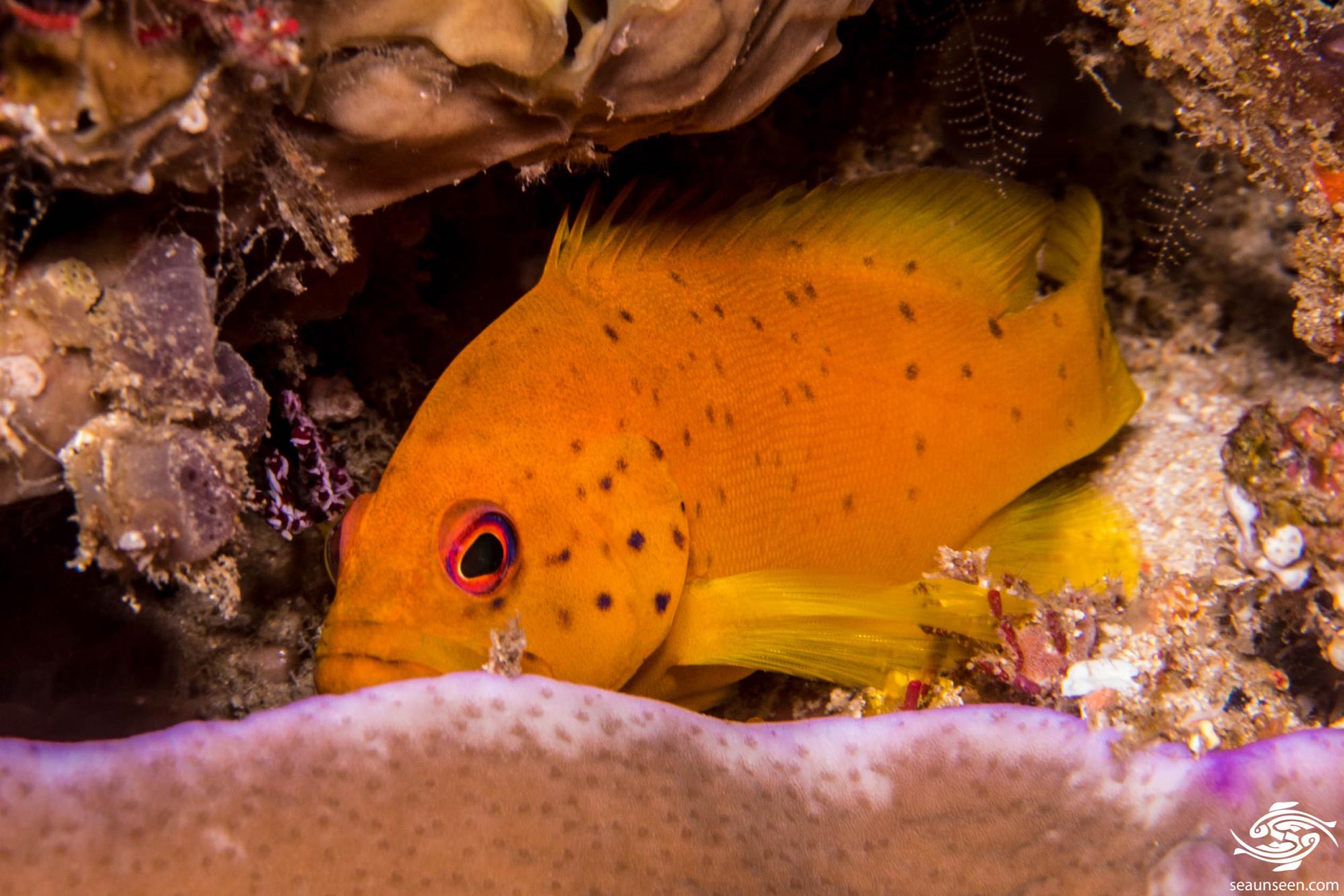 One day back in September 2020, I was doing a dive on Big T Wall , off Dar es Salaam in Tanzania. The vertical wall starts at roughly 20 meters and drops down to around 45 to 50 meters in places. I dropped down to 35 meters to photograph the Pseudanthias bimaculatus that shoal at about this depth in that area , usually mixed in with Pseudanthias squamipinnis.

To do this I pick one fish and follow it and ignore the others. I picked out what looked like a female based on the color and as I homed in on it I realized that it was neither of the above species although the color and size ( some 8 cm ) was similar. The fish in question swam straight to the wall and I managed to photograph it as seen above. I was at a bit of a loss as to what species of fish it was and it was eventually kindly identified as a juvenile Cephalopholis miniata by Elaine Heemstra. 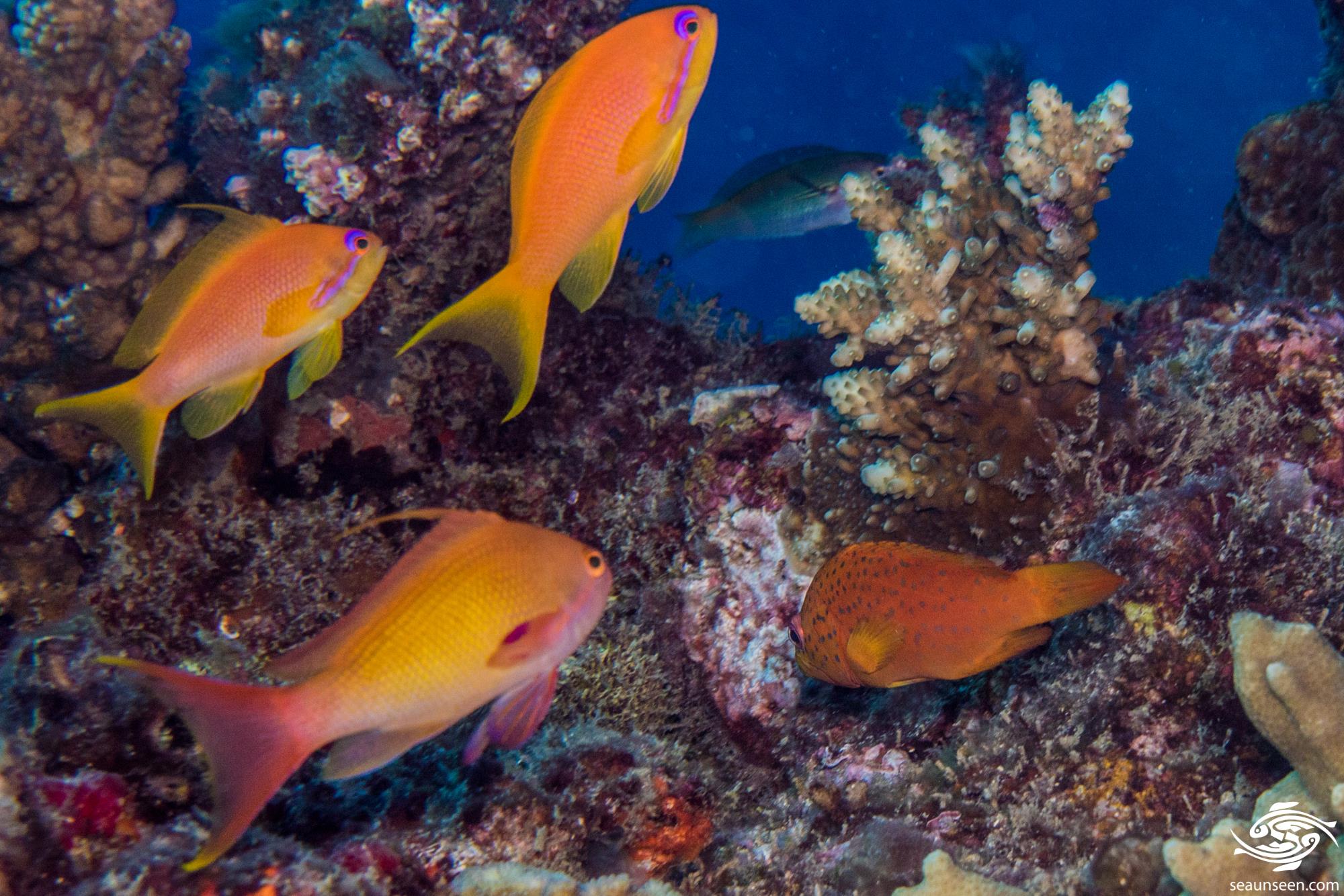 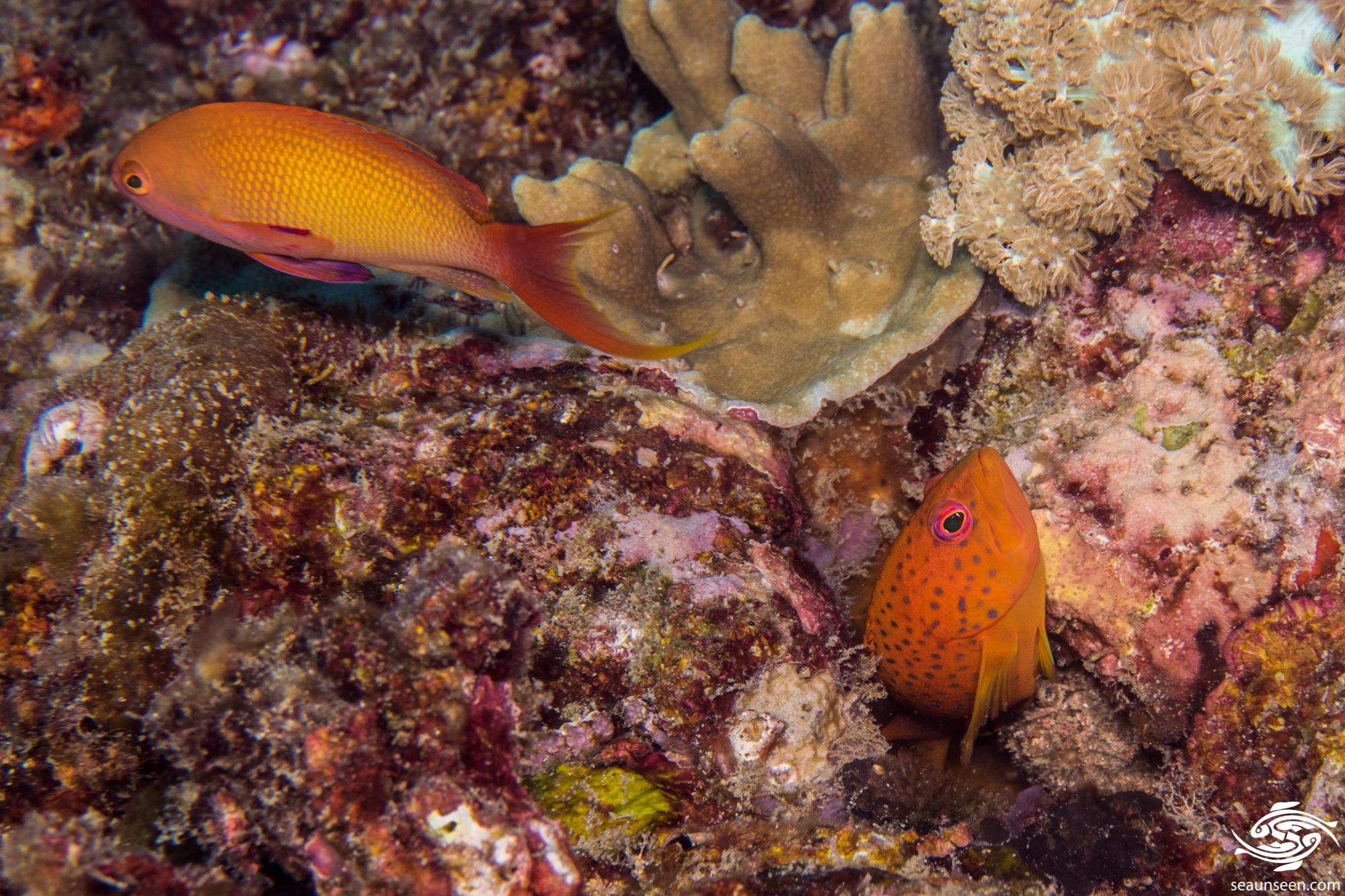 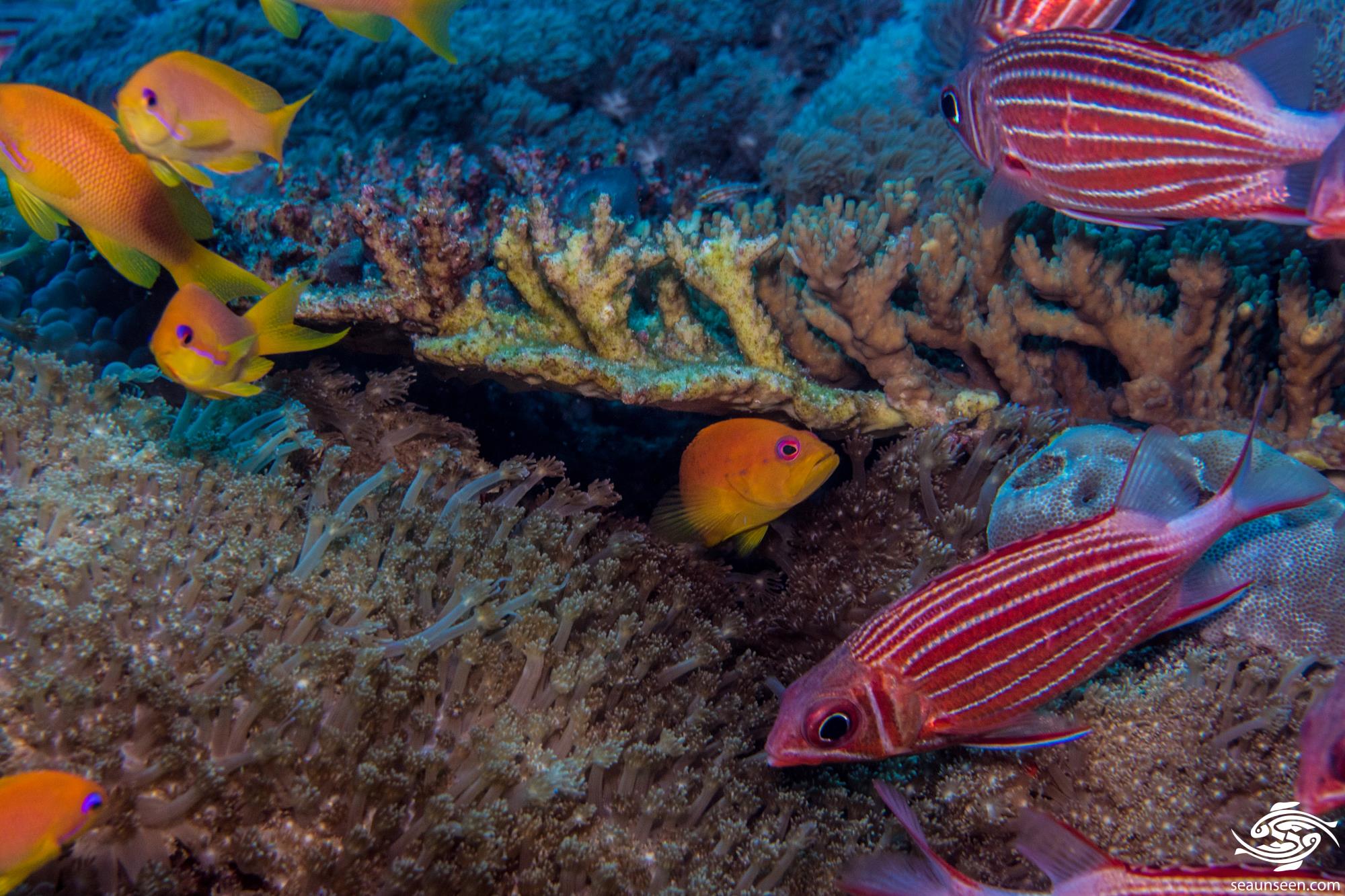 The C. miniata were however always pretty quick to emerge from their hiding places to re-join the shoal above them.

Anyone who dives regularly in the tropics knows the colorful shoals of the various Pseudanthias species and they all have small mouths and feed on the planktonic matter that the current moves past them. The C. miniata as with all members of the genus, are in contrast and have large mouths in proportion to their size and are capable of swallowing proportionally larger prey in comparison. The juveniles of the C. miniata from a very small size ( 2.5 cm below) closely resemble the adult females of in particular P. squamipinnis and this resemblance seems to last up until at least 10 to 12 cm when their background color changes to the reddish color found in the adult C. miniata. 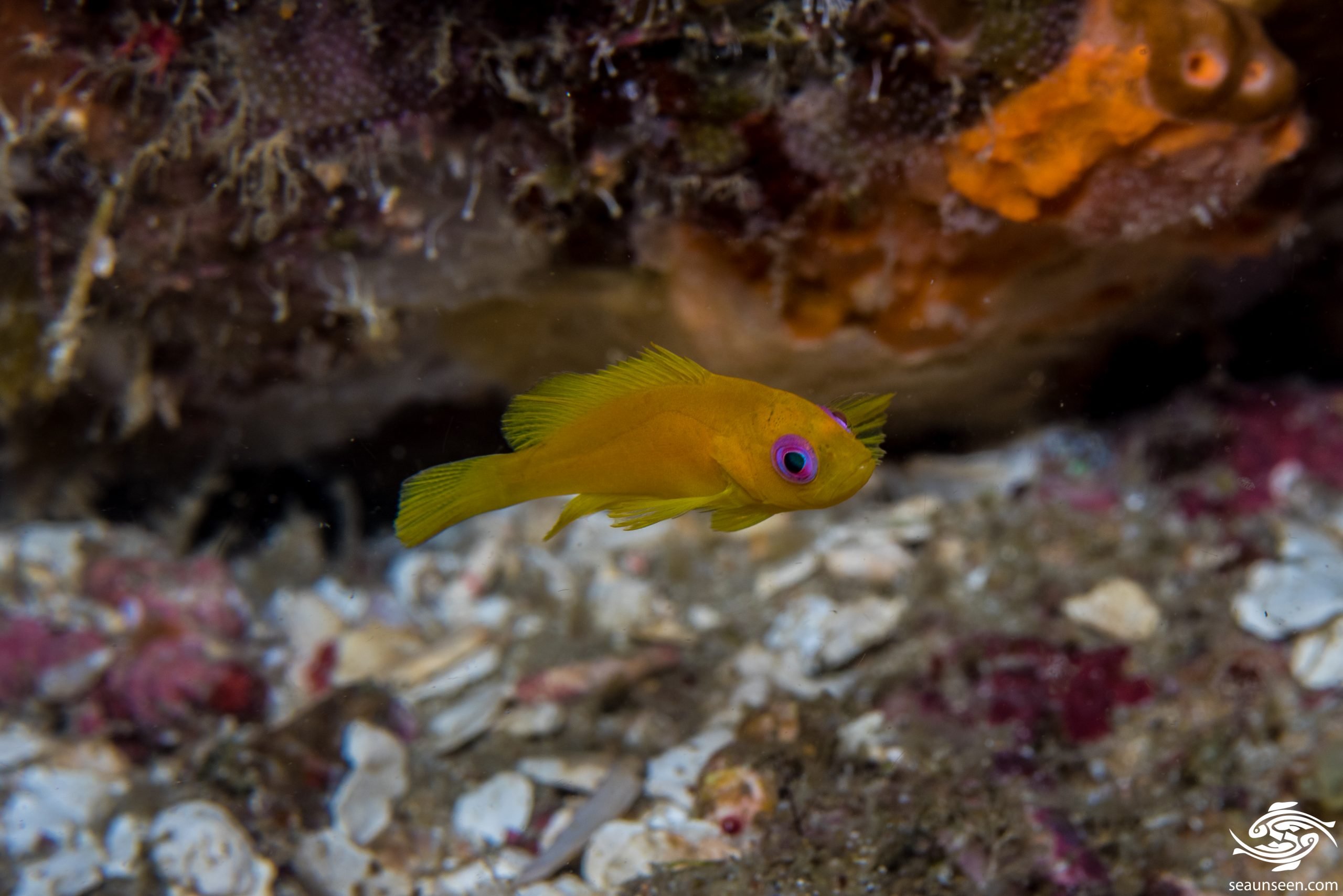 The resemblance to the adult female P. squamipinnis below is fairly close, and when swimming in a shoal one has to look very carefully to distinguish them. The C. miniata from observation tend to leave the shoal to move into their hiding spot quite often, particularly if any larger fish approaches the shoal and this is the easiest way to spot them. 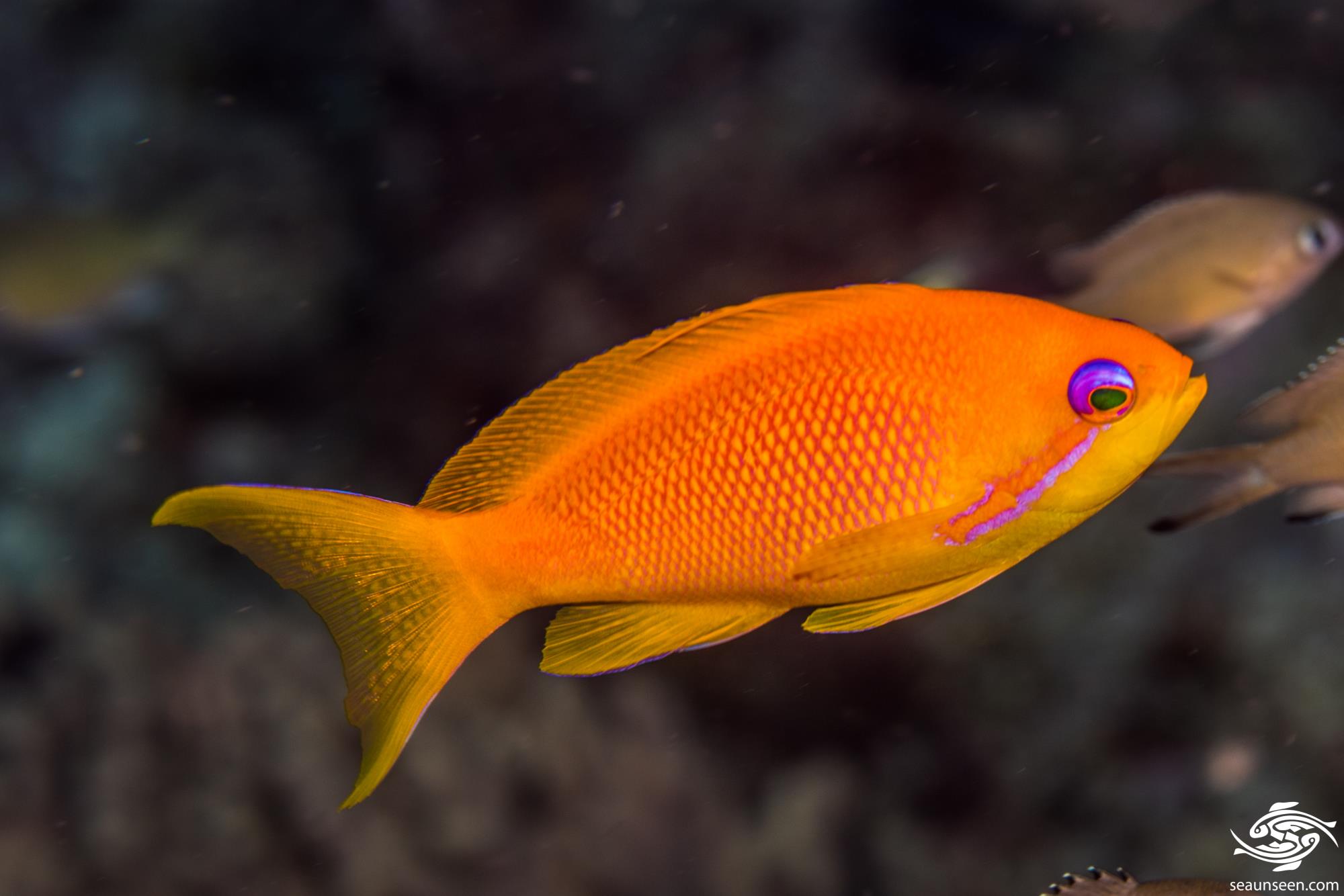 One of course wonders why the resemblance exists and what the purpose of the juvenile C, miniata joining the shoals of the P. squamipinnis is. This is fairly easy to see if one observes them, there are numerous juveniles that swim in shoals near the shoals of the Pseudanthias and these juveniles have presumably become habituated to the lack of a threat from the adult P. squamipinnis who do not feed on them. The juvenile C. miniata can be observed eating these smaller fish. 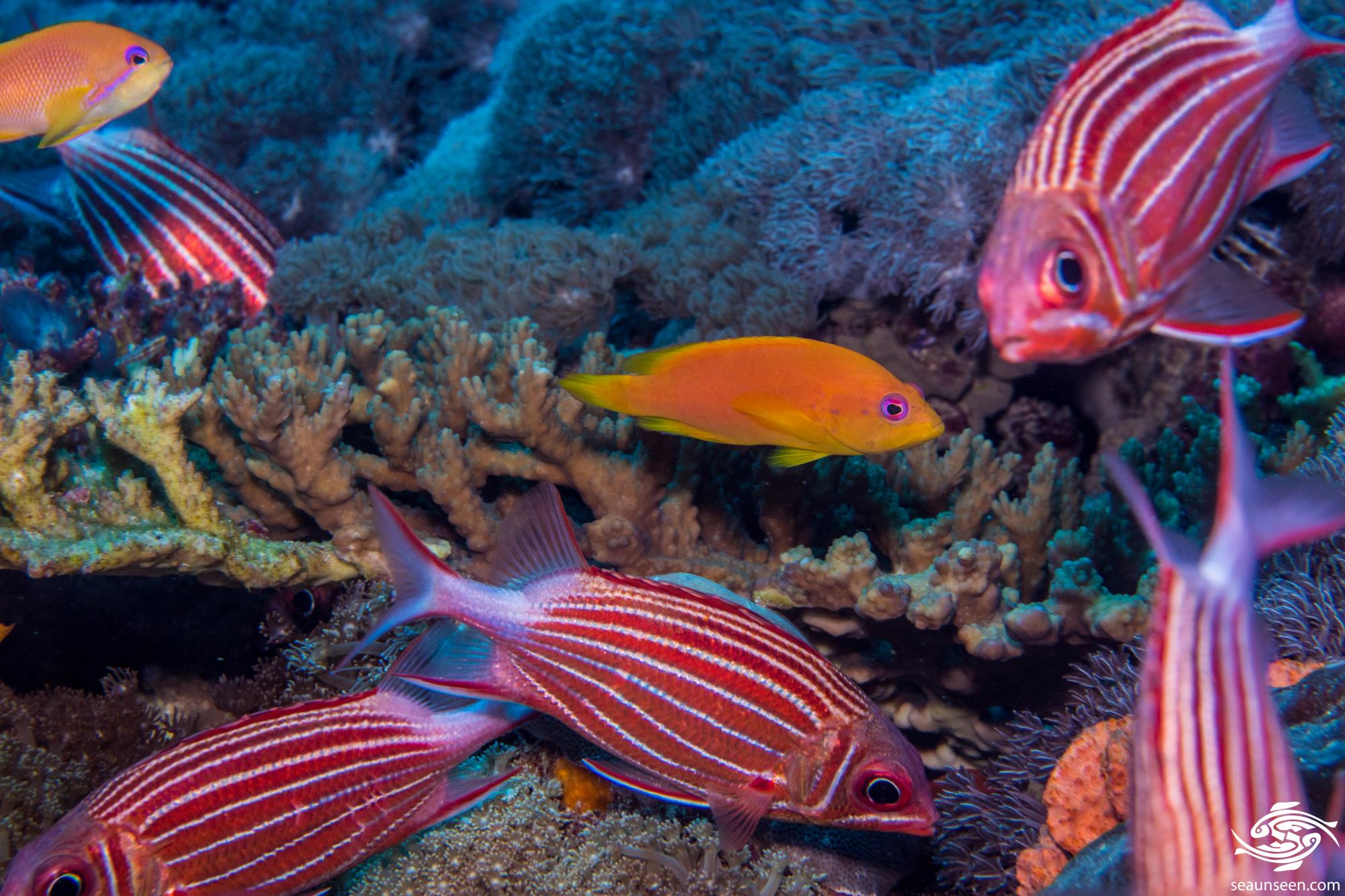 This type of behavior is often seen in nature and one one could debate what type of mimicry it is, because there are two benefits, one of safety from the shoal against other predators and the other of ease of access to the prey. Simply put,  it gives the juvenile a competitive advantage in the early stages of its life in that it allows it a safer swim above the substrate where its prey are swimming by going into the shoal and by mimicking the Pseudanthias females ( The most common of the species) which the prey seem habituated to , it provides easier access to food. 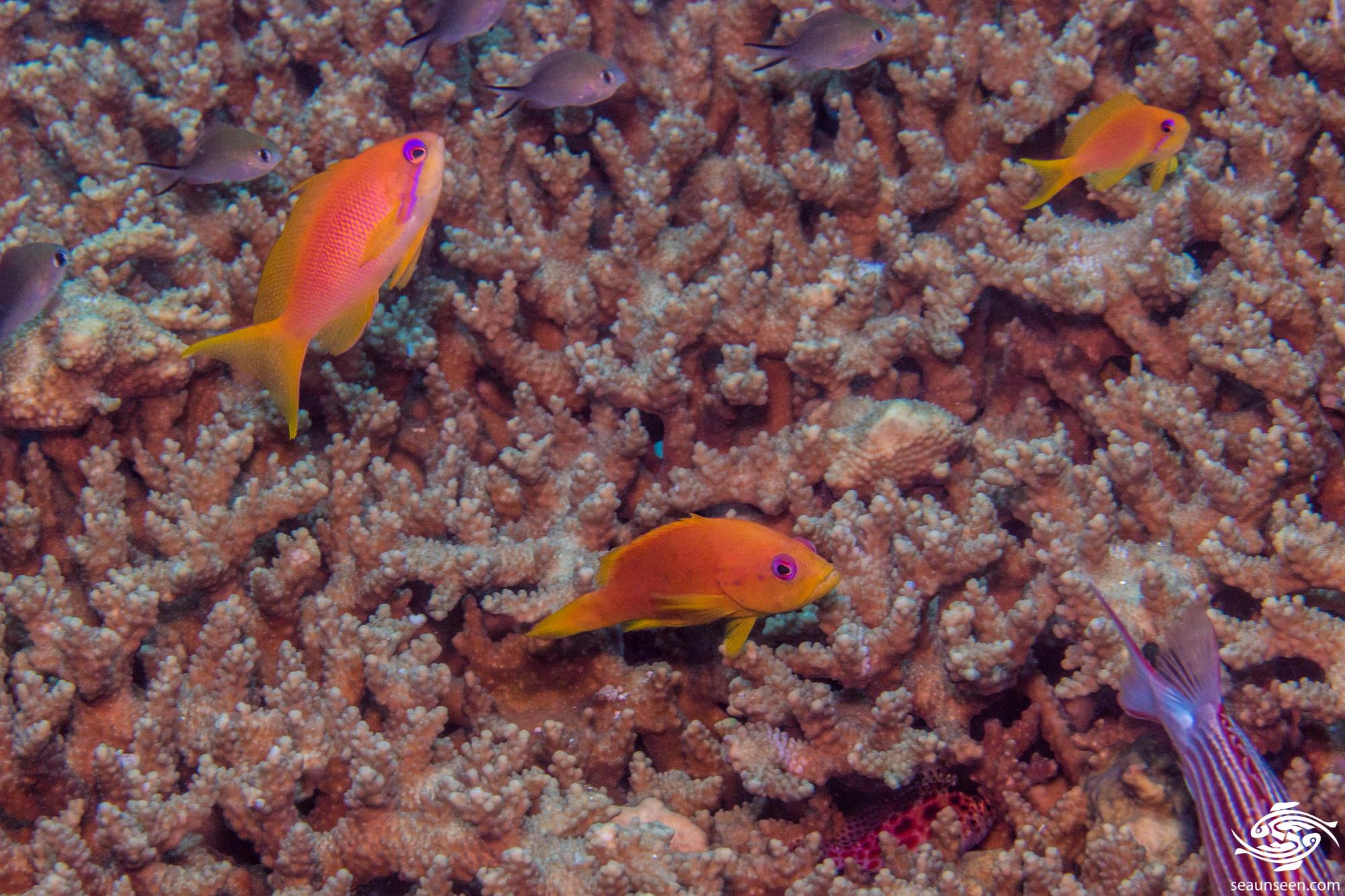 There is a third benefit to this behavior of the C. miniata. It seems well documented that the main diet of the adult C. miniata are actually Pseudanthias squamipinnis and they are recorded as feeding on them mainly in the early morning and late afternoon when the light is low.

However the P.squamipinnis seem to become habituated to the behavior of the fish that joins them, initially it is the same size as them and as it grows and changes color, at least up until the 18 cm size, in broad daylight the C. Miniata is able to swim up into the shoals of P.squamipinnis and swim around with the shoal without disturbing them. Very gently and delicately, without alarming the shoal, they are able move behind an unsuspecting P.squamipinnis female and swallow them.  I have only seen this twice now but it is done so carefully and slowly by swimming up behind the prey, that when viewed ones impression is that they so good at it they must have done it before. 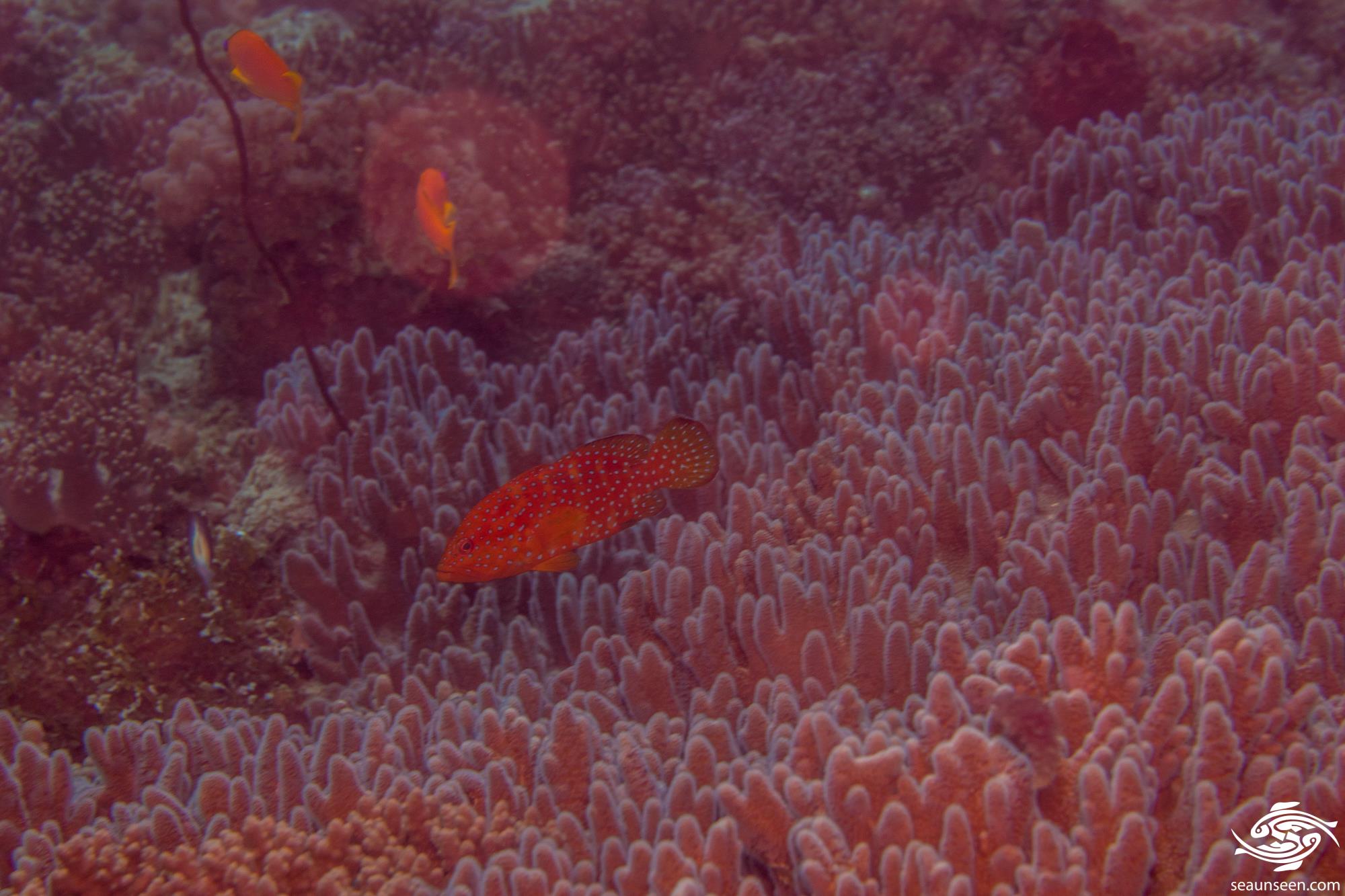 The specimen above has just swum up to three P. squamipinnis in a loose shoal and has very gently swallowed one. He has then seen me and then dropped down onto the coral. All done so gently that the shoal is not spooked in any way. Better quality image of the same fish below. 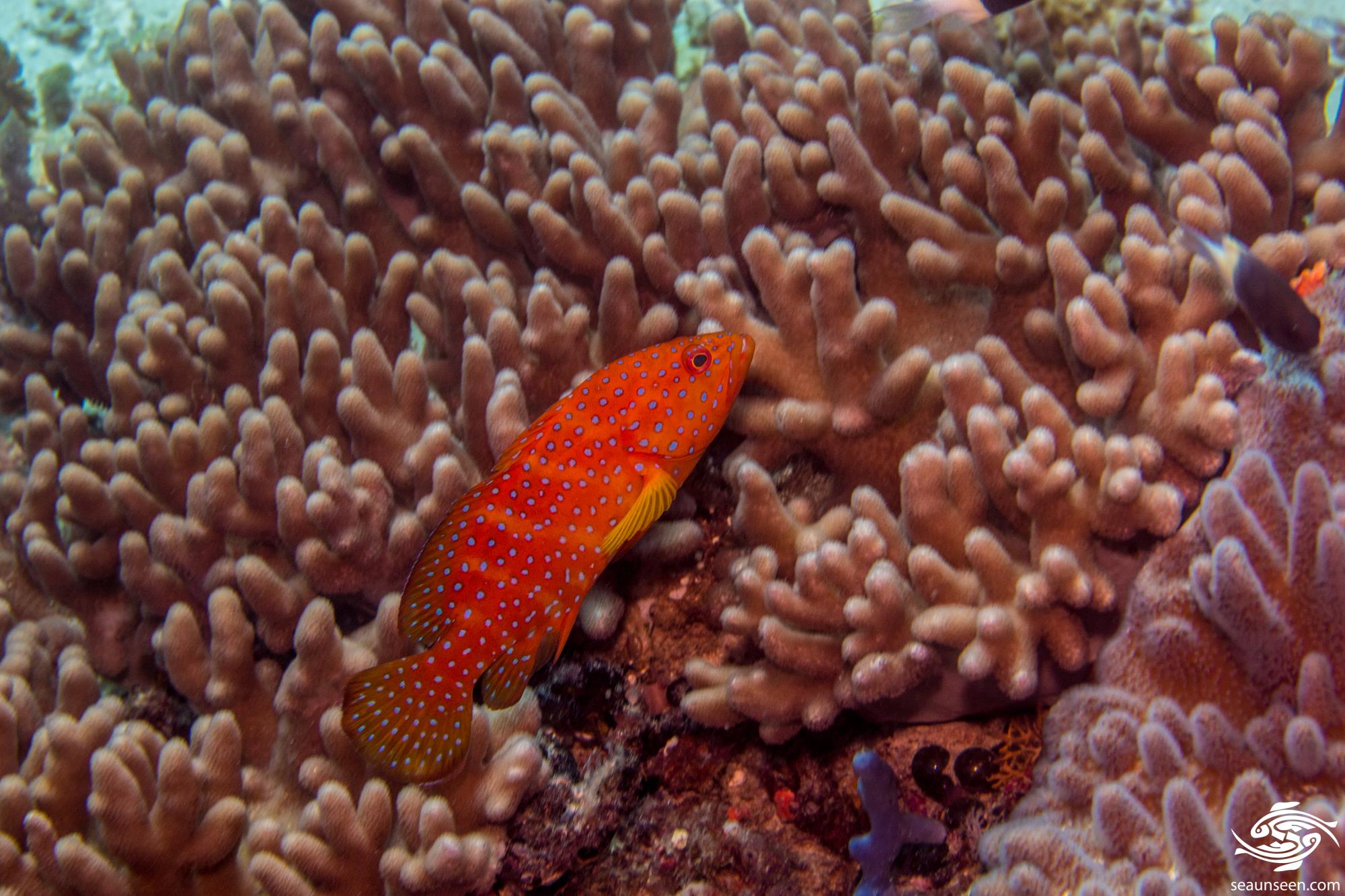 Below, the same fish hiding in the leather coral shortly after the eating incident. 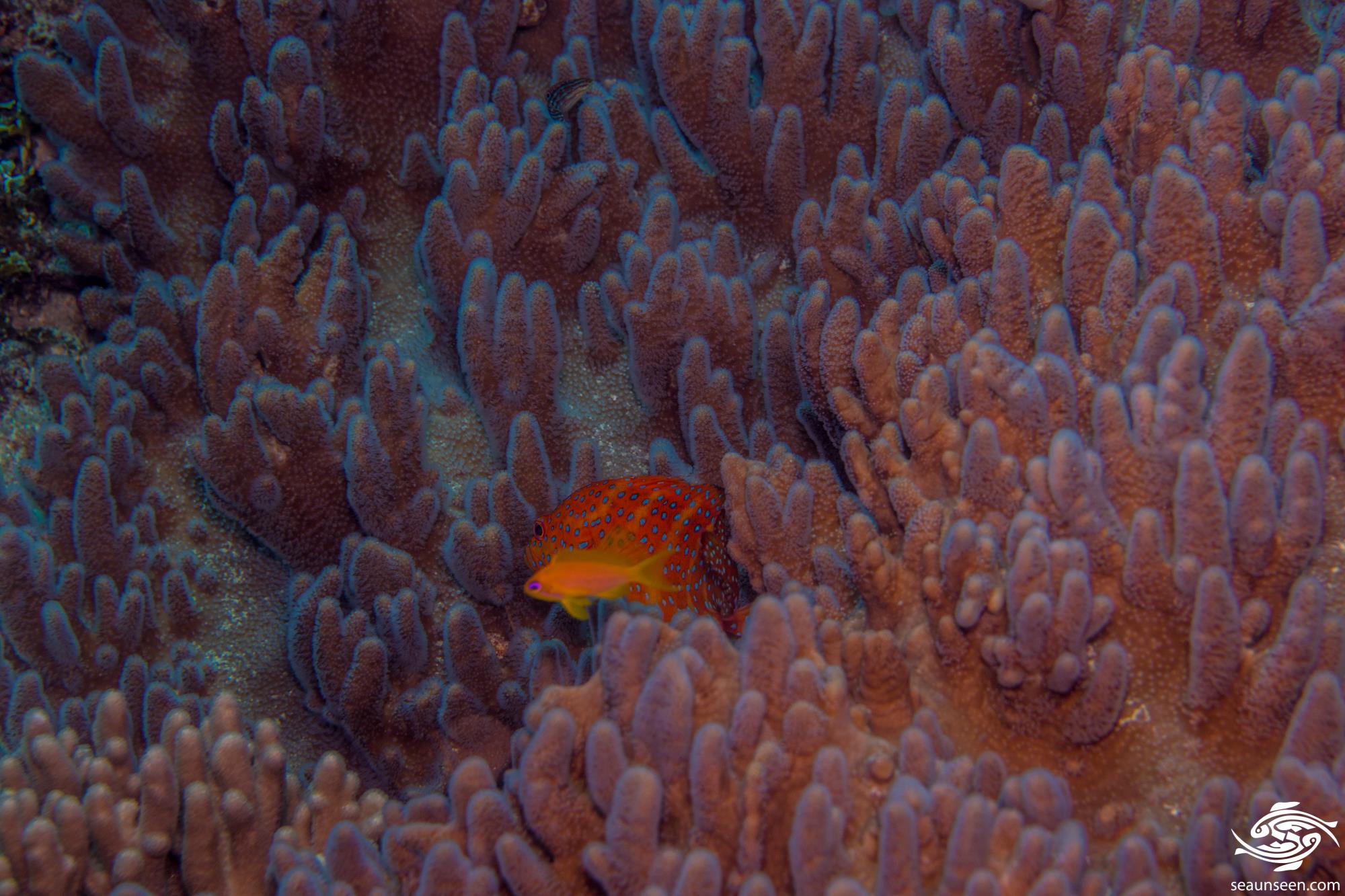 Obviously this  behavior requires further studying before one can draw proper conclusions, but some interesting questions are raised. From an evolutionary point of view, the consequence of the first mimic behavior to access a food source safely, seems to lead to a positive secondary benefit, at least for some period of time, until the model which initially provides the benefit , becomes the main prey of the adult.  This would make a very interesting  project for someone to follow up on and study .  Such a study could even be used to test the memory of P.squamipinnis to see whether shoals not exposed to C. miniata allow the same proximity.