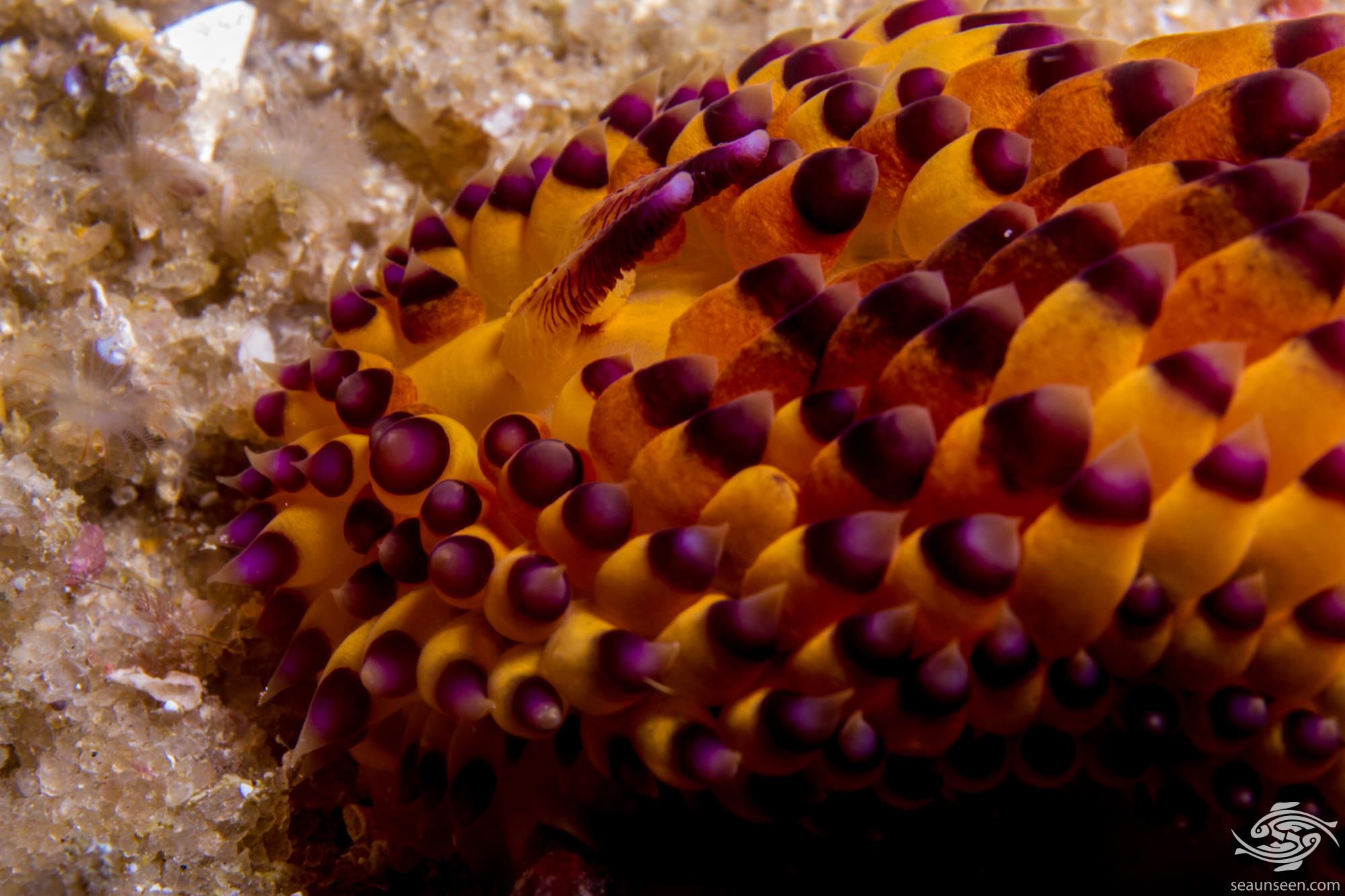 The Janolus savinkini  is a species of colorful sea slug that is also known by its common name of the Purple-tipped janolus. They are dorid nudibranchs, marine gastropod mollusks. First described by Martynov & Korshunova in 2012, they are not common in Tanzanian waters and to our knowledge have only been seen on Mafia Island in Chole Bay. 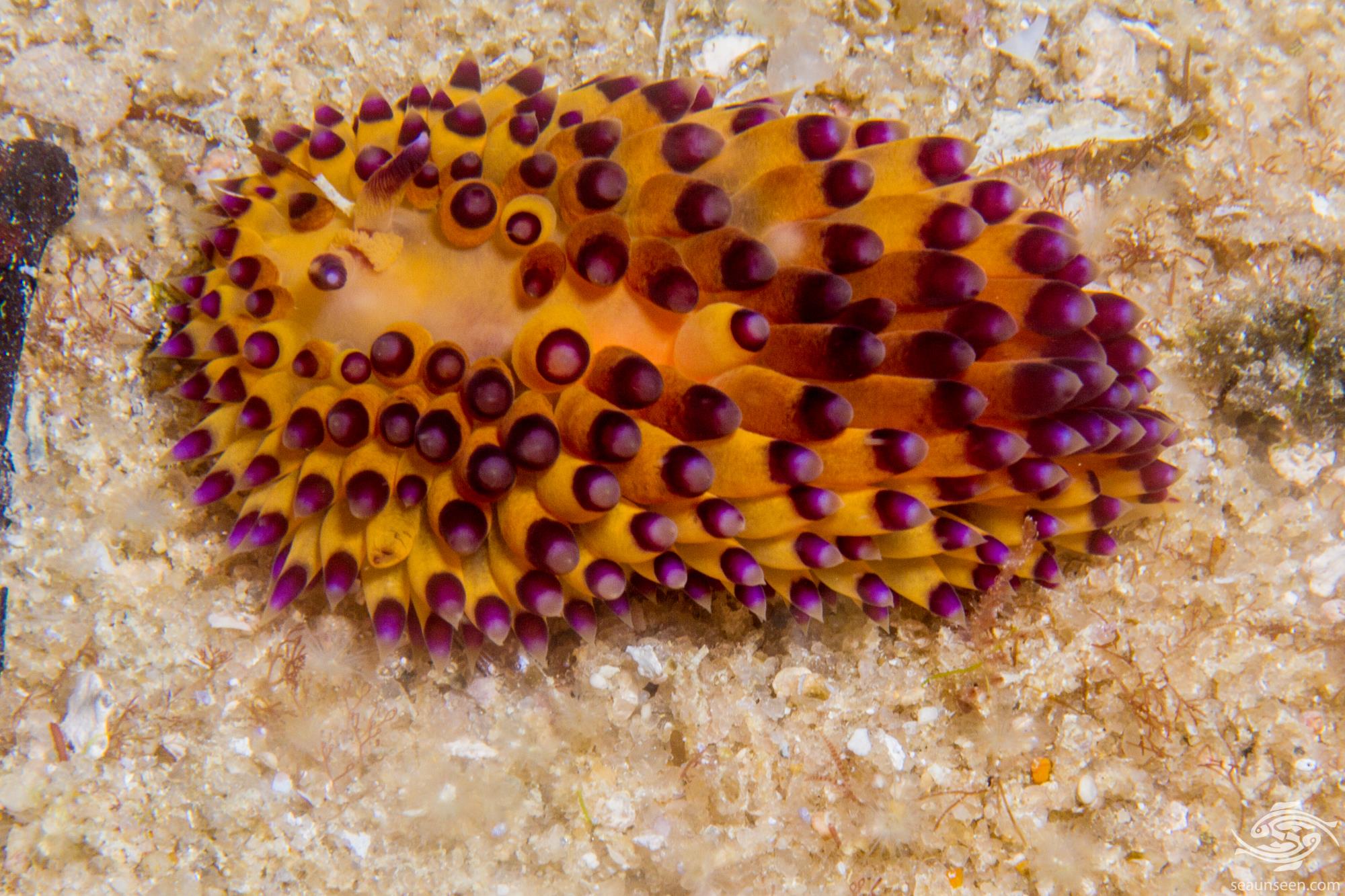 Janolus savinkini have an elongated shape with rounded ends. There are a large number of round bulbous pointed papillae extending off the body. The specimens we have seen have had roughly 120 of them. All the specimens we have seen have had a vibrant orange colour with purple tips on the papillae but the colour is variable.  The rhinopores are also orange with purple tips.  In between the rhinopores is the caruncle or inter-rhinophoral crest which is fairly prominent and is made up of a lot of finely branched folds. J. savinkini seem to grow up to around 7 cm in length. 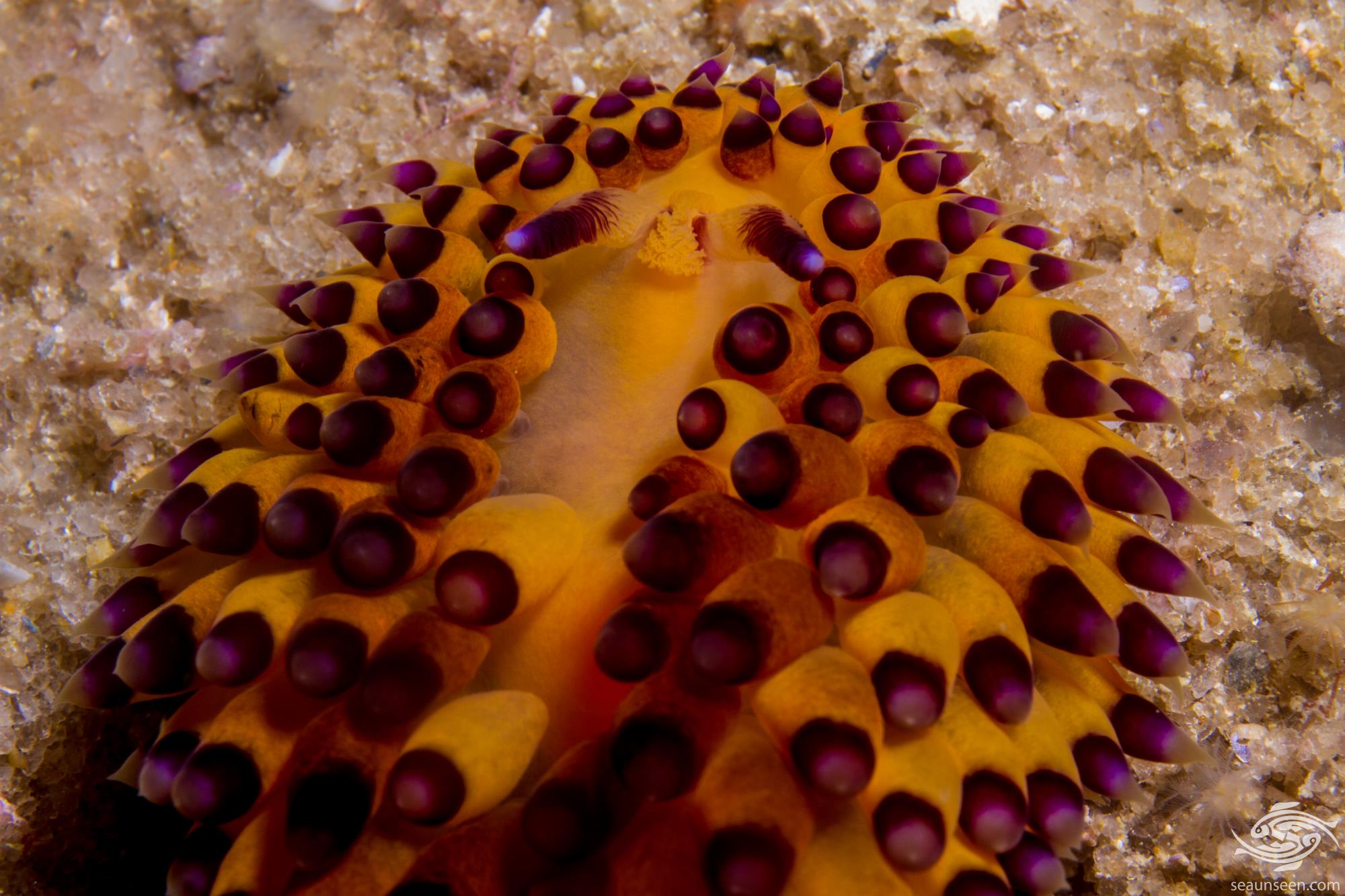 JANOLUS SAVINKI IN THE WILD

Janolus savinkini are not common in Tanzania and have only been seen in Chole Bay on Mafia Island.  They are usually seen in the shallows in 5 to 11 meters. The bottom is covered in light algal growth and has large numbers of small hydroids on it. They are usually seen out in the open, possibly feeding on the hydroids. 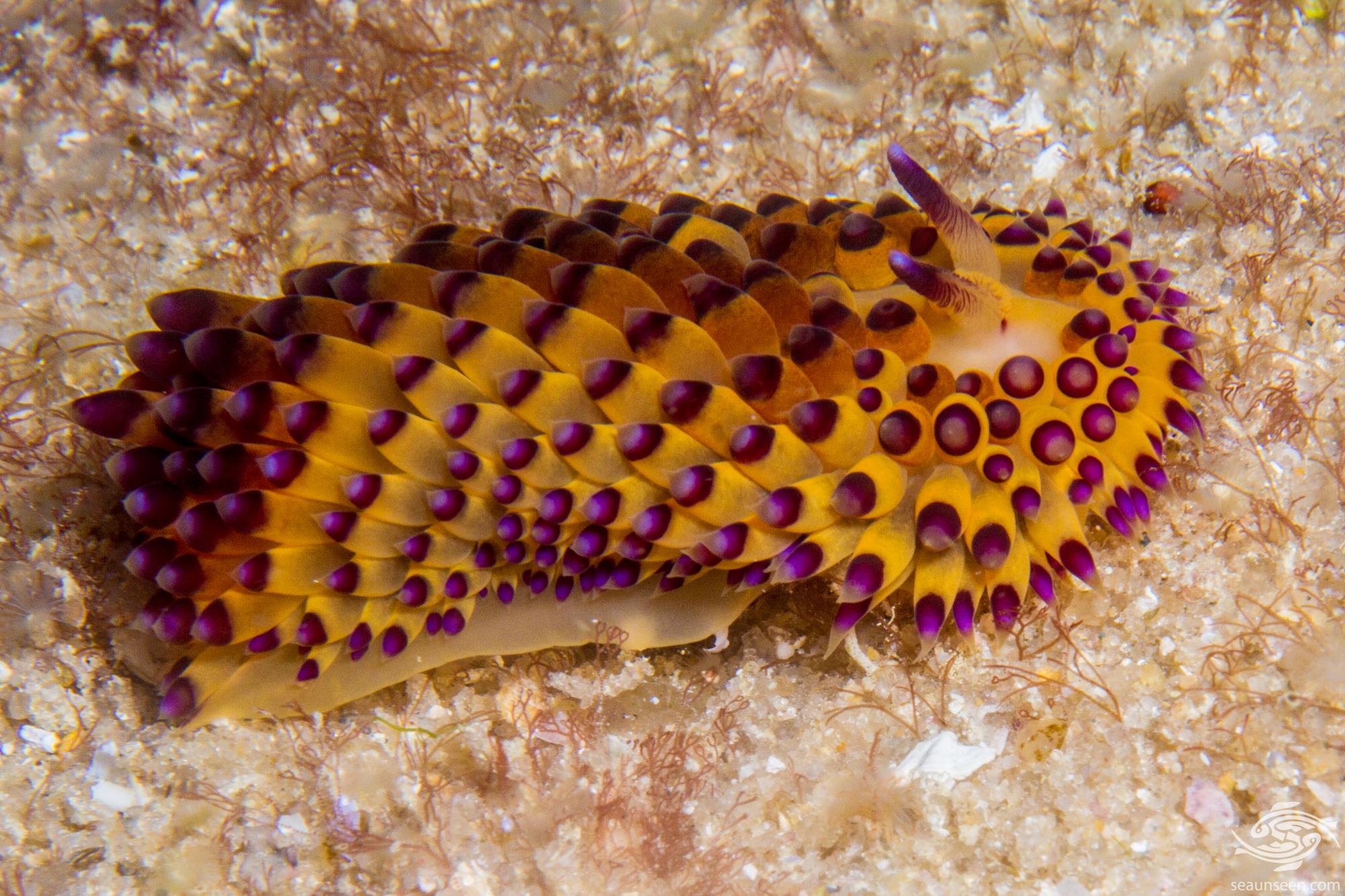 The Janolus savinkini is found across the Indo West Pacific area . They are found on rocky and coral reefs to a depth of 30 meters but we usually see them around the 12 to 20 meter range in Tanzanian waters.  They are usually found in areas of high soft coral and sponge growth. 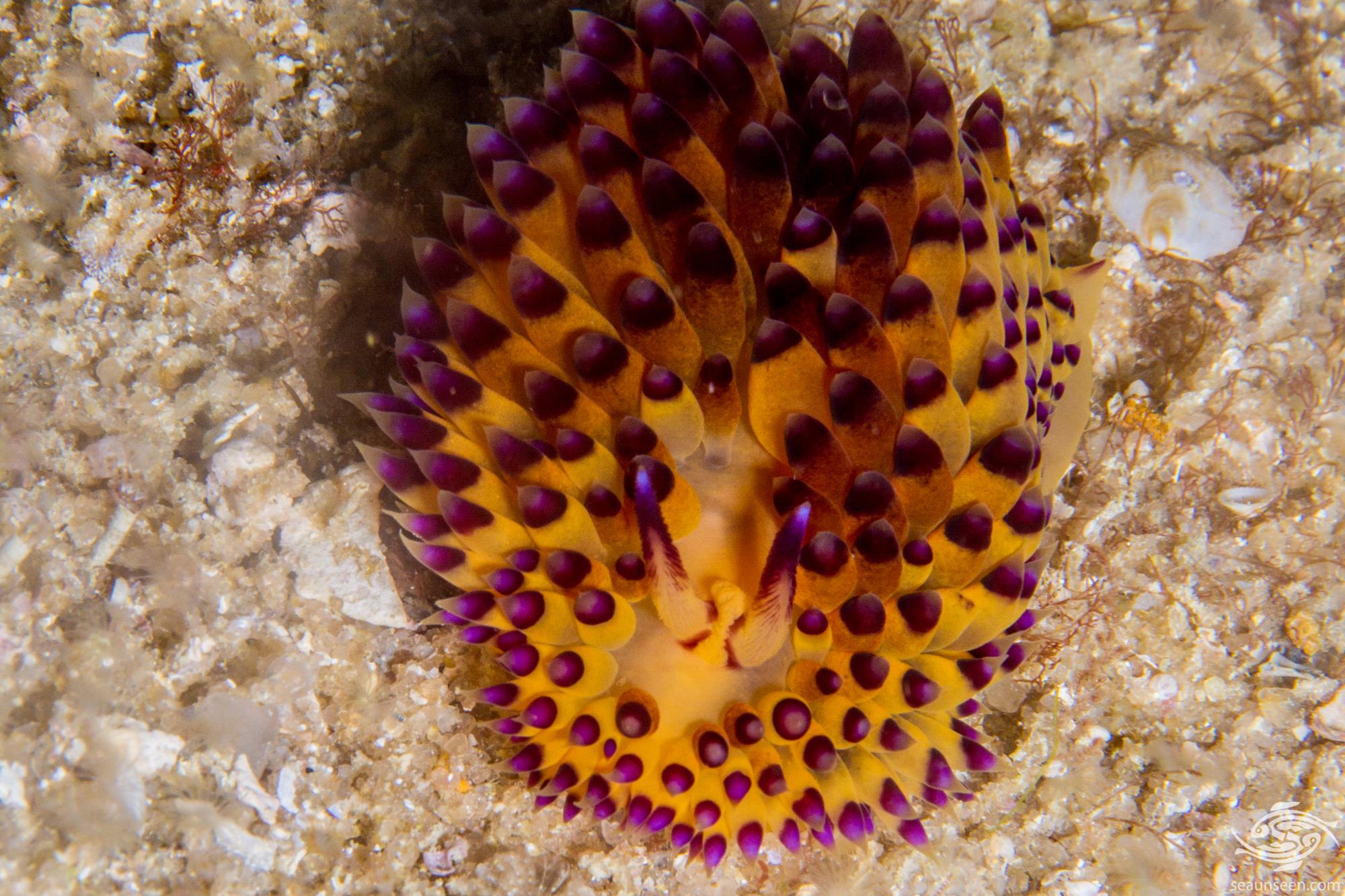 Janolus savinkini probably feeds on hydroids which have stinging cells in them. In Tanzania they are found on beds with large numbers of small hydroids and in Okinawa they have also been found on beds of hydroids. These stinging cells are retained in the body making them both unpalatable and with the ability to sting they have defensive capabilities. This provides protection against predation.

Nudibranchs have their teeth on their radula which is similar but not quite the same as a tongue. Food is grasped and processed by the radula and passed through the esophagus into the stomach. After digestion waste products pass through the intestine out the anus, which in Janolus savinkini is in the rear right of the body which can be seen below. 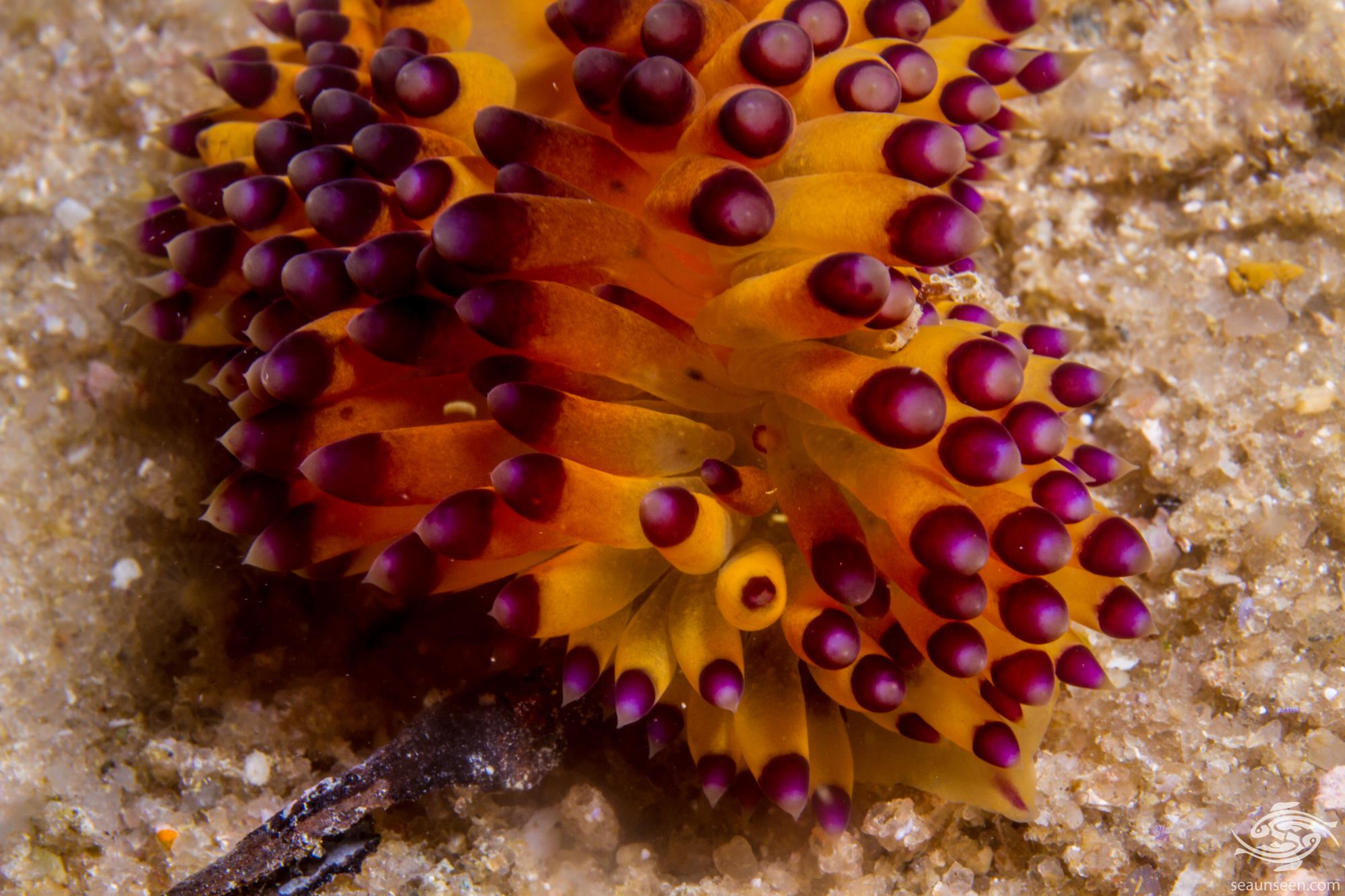