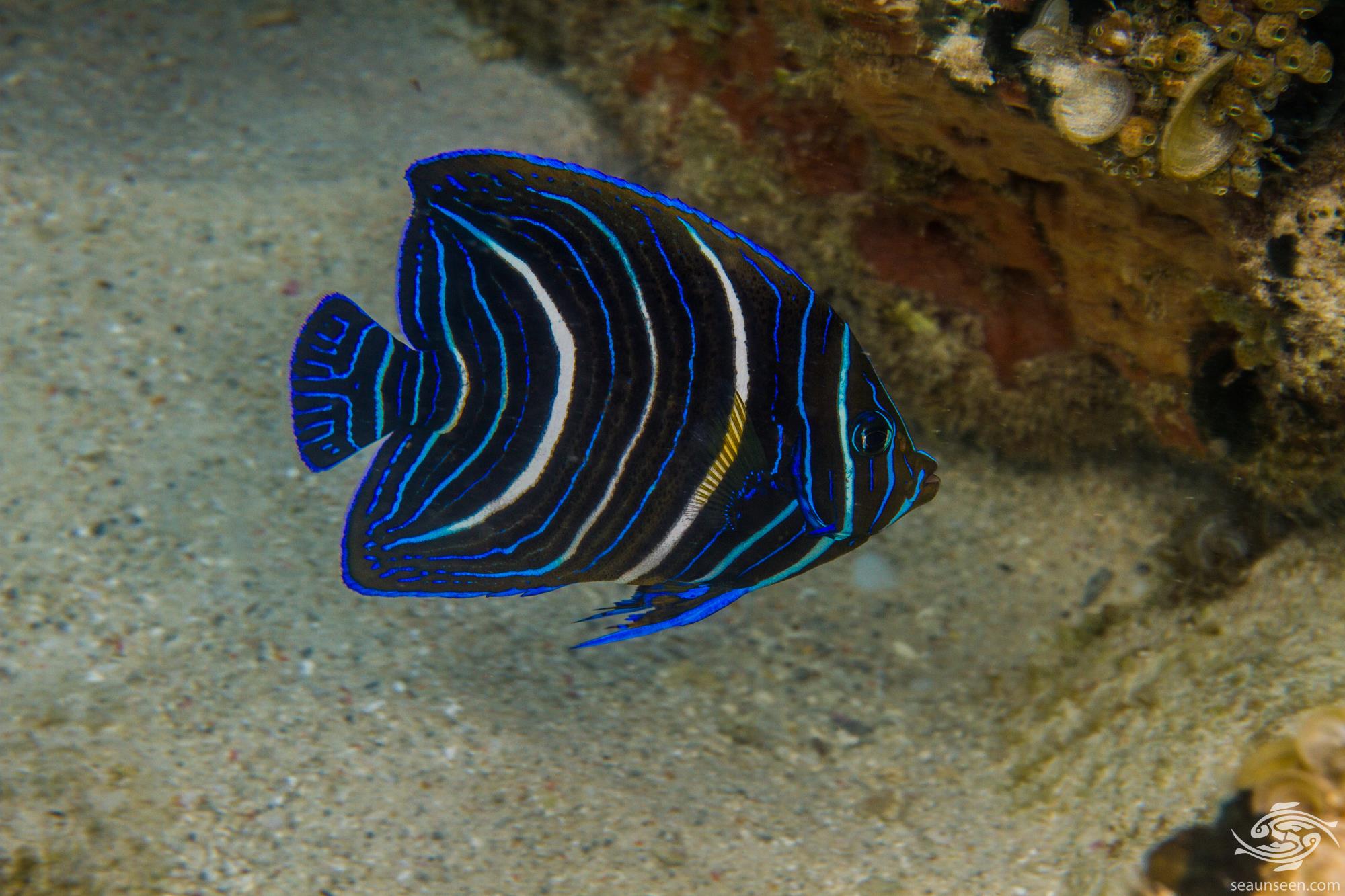 The Koran angelfish (Pomacanthus semicirculatus) is also known as  the Blue angelfish or Semicircle angelfish. They are a fairly commonly seen fish on coral reefs in East Africa. 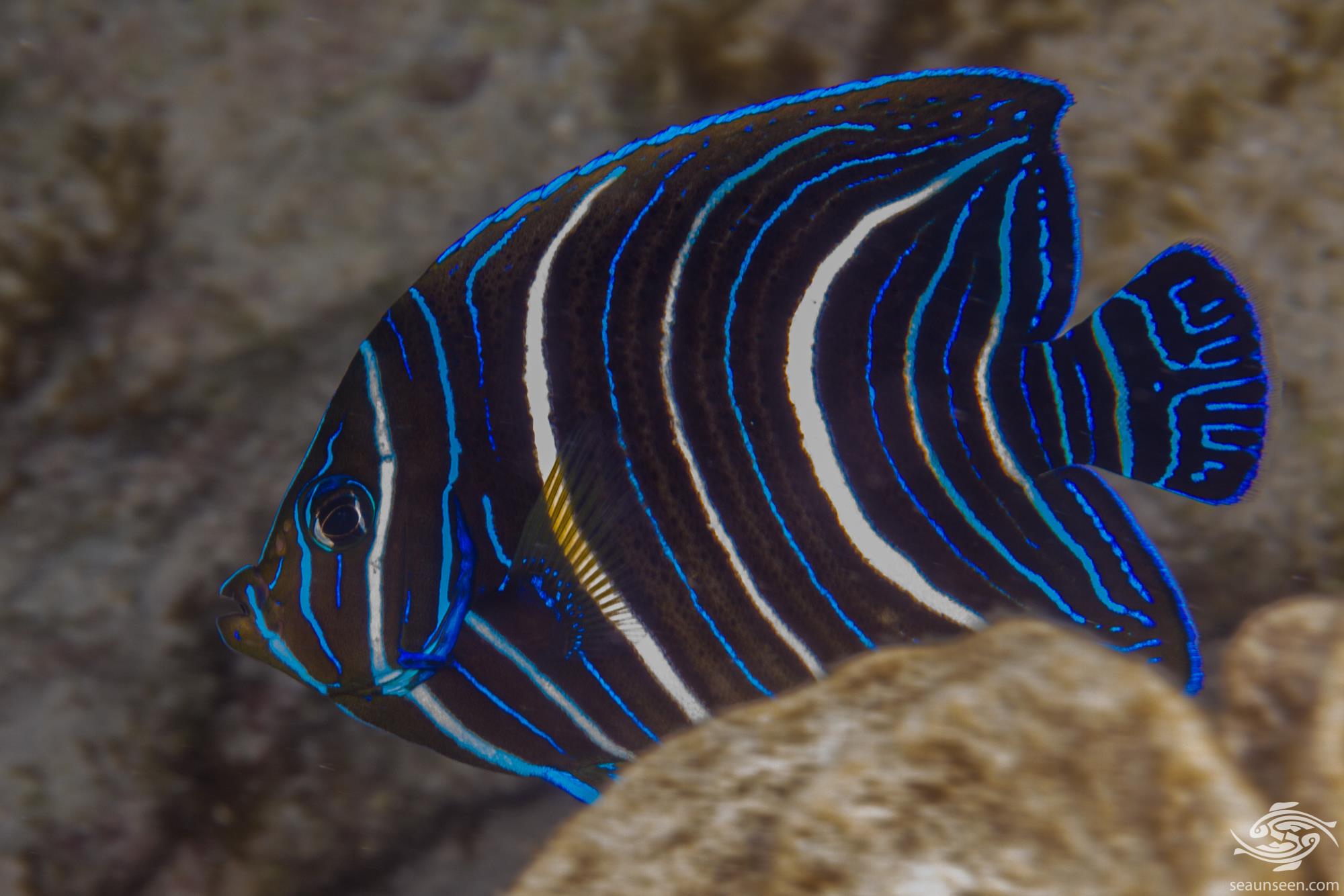 Angelfishes are closely related to the butterfly fish. They are distinguished from them by the large spine on the rear of the gill cover. The family obtains its name from the Latin “pom” meaning cover and “acanthus” meaning thorn. One common characteristic that the family has, is that the young are dramatically different in color and pattern to the adults.

As with the other members of Pomacanthus, the Koran angelfish  undergoes a transformation in coloration as it grows. The juvenile has blue, black and white lines that are crescent shaped or almost half circular. If one is observant the curve easily distinguishes it from its similar relatives, Pomacanthus imperator, chrysurus and annularis. These all have similar coloration but different shaped lines.

During the transition from juvenile to adult the lines blur and they resemble arabic writing hence the name Koran Angelfish. 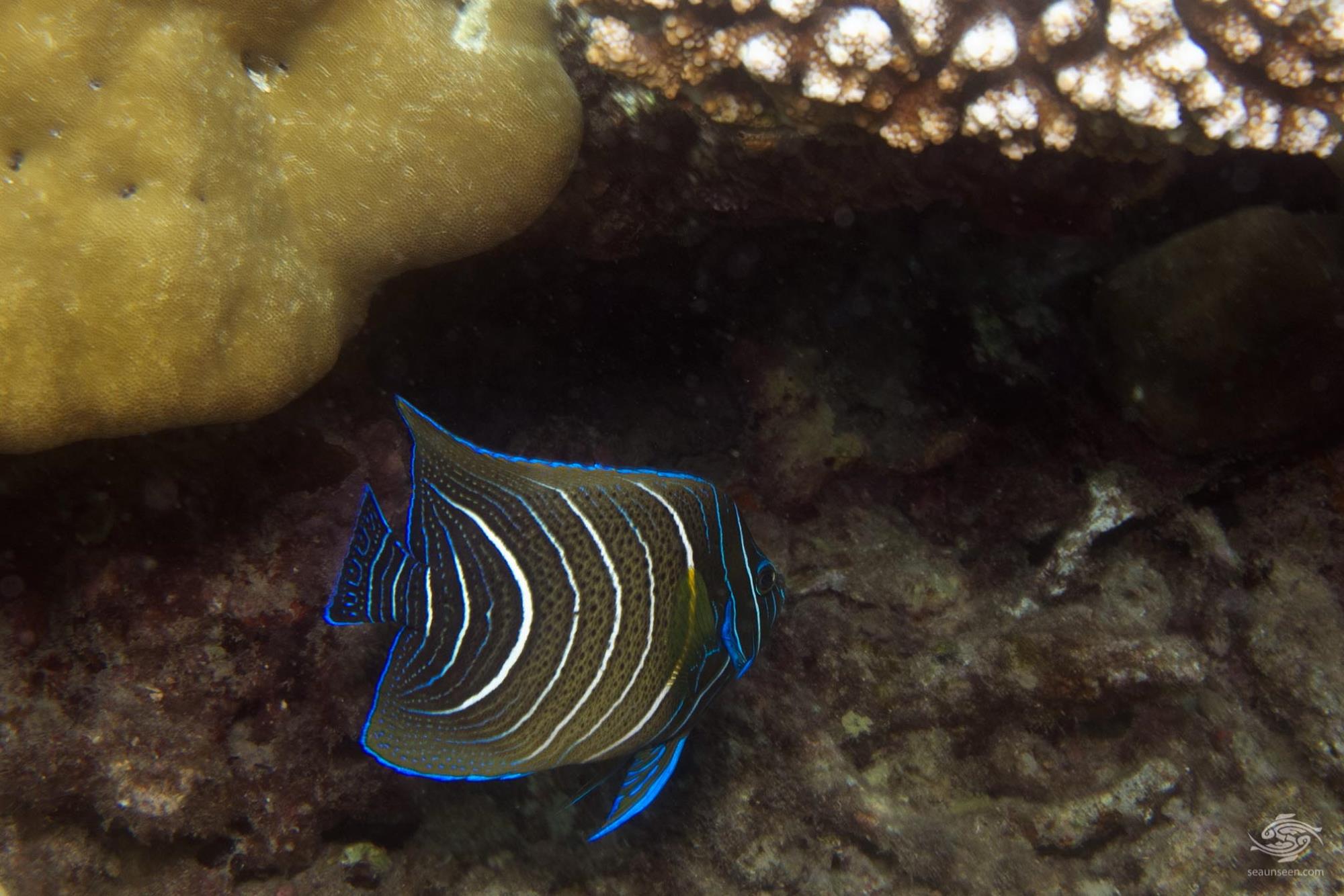 The adult is a pale green-brown color with dark scattered speckles and light crescent markings. The edges of the fish’s body are lined in fluorescent blue. There is also a darker blue outline on the eyelid and gill. Adults grow to thirty five centimeters (13.75″). 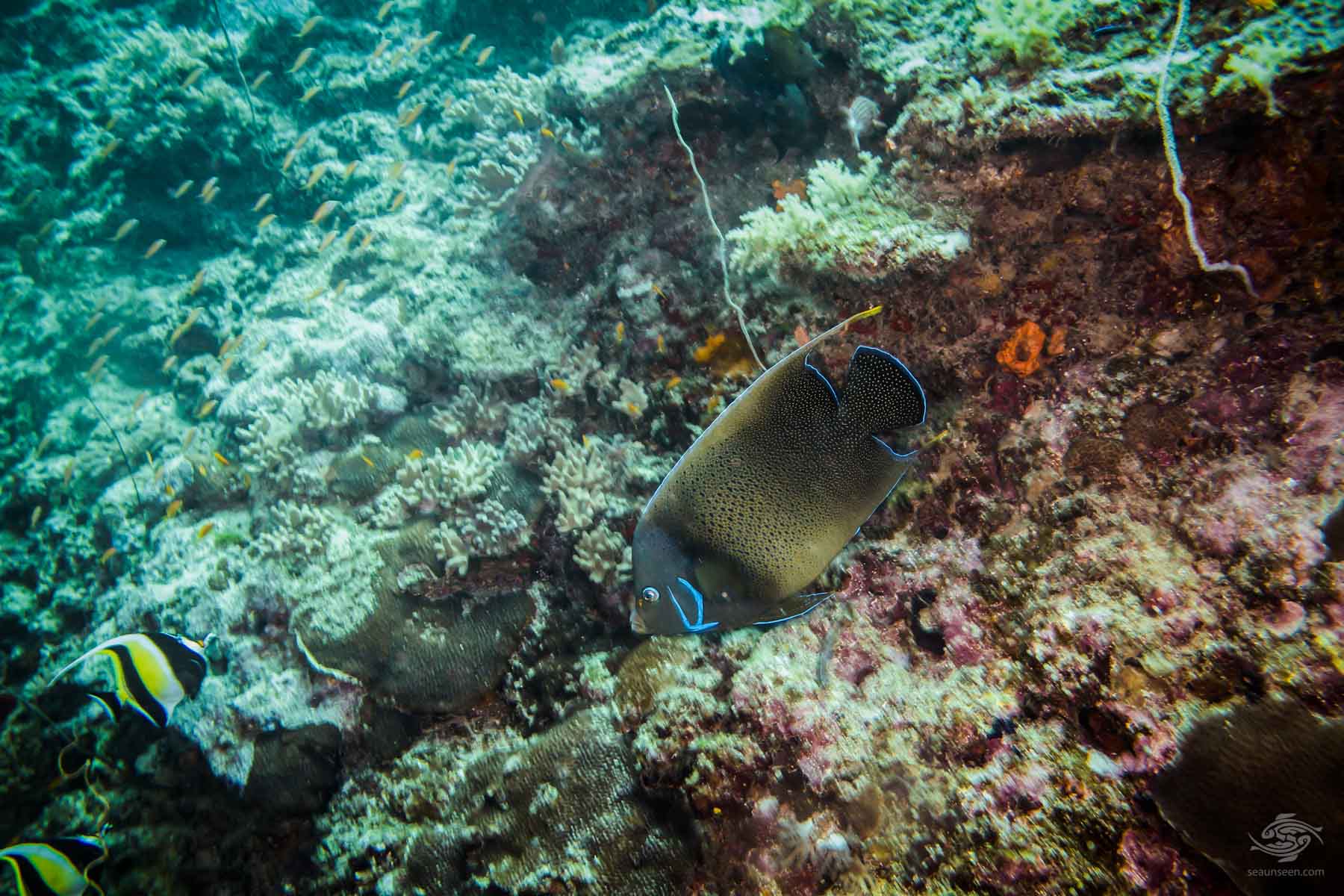 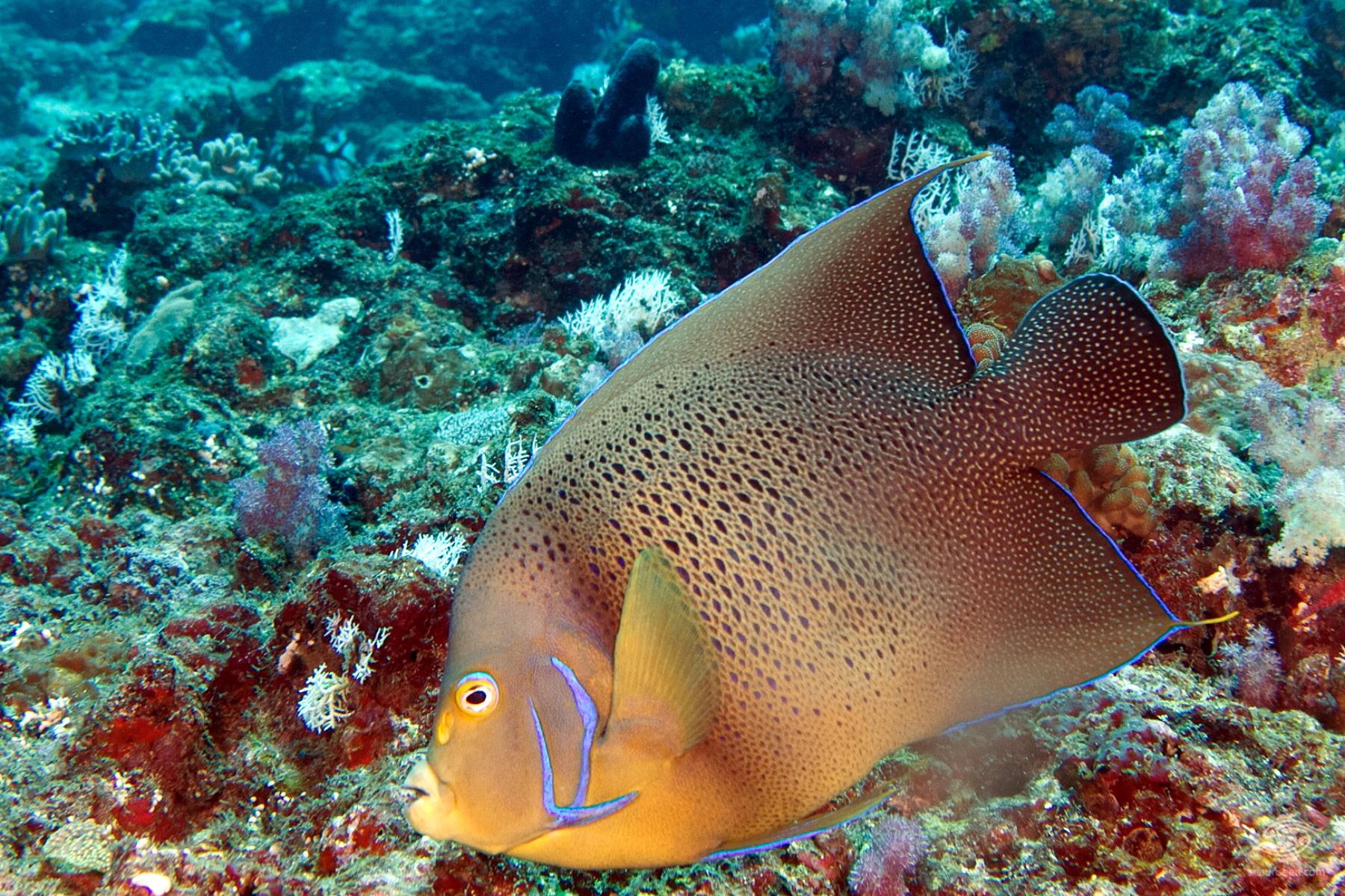 The Koran Angelfish are found across the Indo-Pacific, from the east coast of Africa eastwards across the Pacific and have reportedly been found in Hawaii and California.

In South Africa juveniles are often found in rock pools on the shoreline, sometimes even above the neap high water mark. The fish enter and leave these pools with incoming and receding waves. 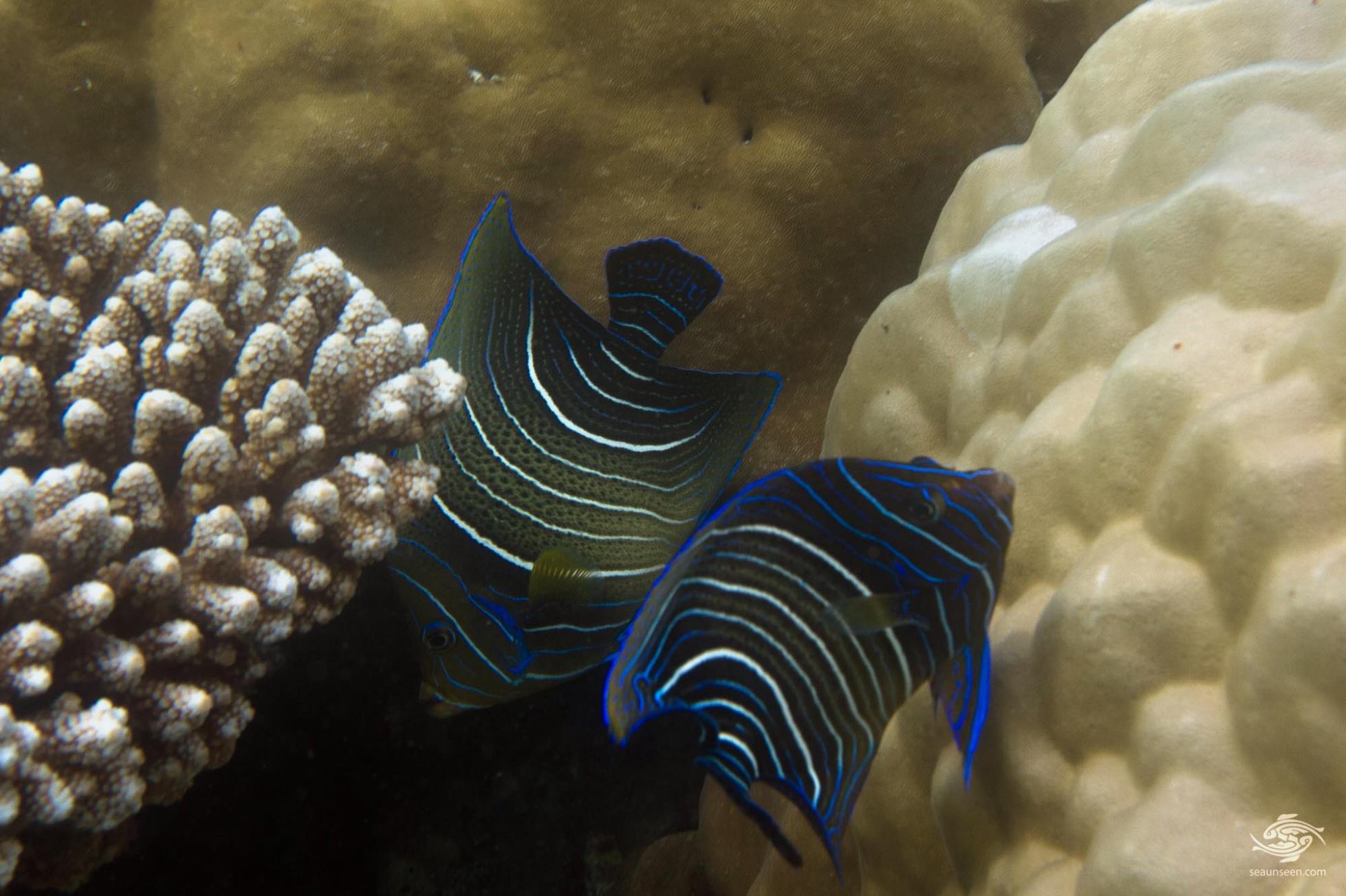 They are often kept by aquarists, particularly in their younger phase. In terms of looks they come second to the Pomecanthus imperator  but are never the less very attractive looking fish.  Because of their habit of nipping on anemones and corals they are not suitable for a true reef tank. To keep them happy they should be given plenty of hiding places and overhangs. They are relatively hardy. 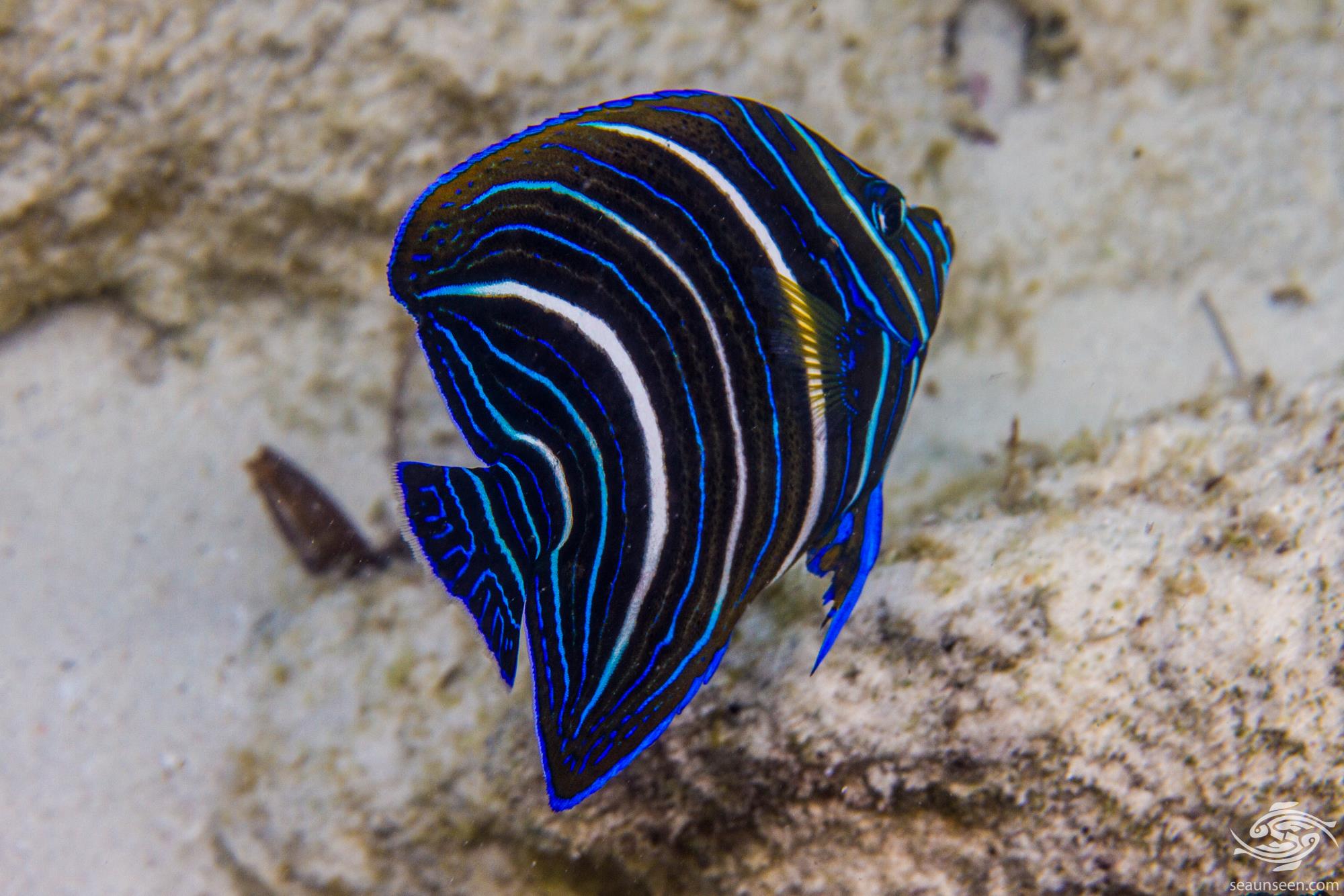 Juvenile Koran angelfish are timid and are often seen swimming upside down or sideways under a ledge or in a cave. Adults are also fairly shy and are almost always seen around coral reefs or rocky areas and will enter caves if approached. As with the other similar angelfish, they are highly territorial and can usually be found in the same area. On one occasion we viewed two adults swimming together rubbing against each other at around 14 meters in depth. After a few minutes of circling rubbing against each other they swam together some 8 meters above the substrate and continued rubbing against each other. A small cloud appeared below the fish and we assume that the fish were mating.  At the time the visibility was good and the incident occurred around 09h45. The tides were mid way between spring tides and neap. 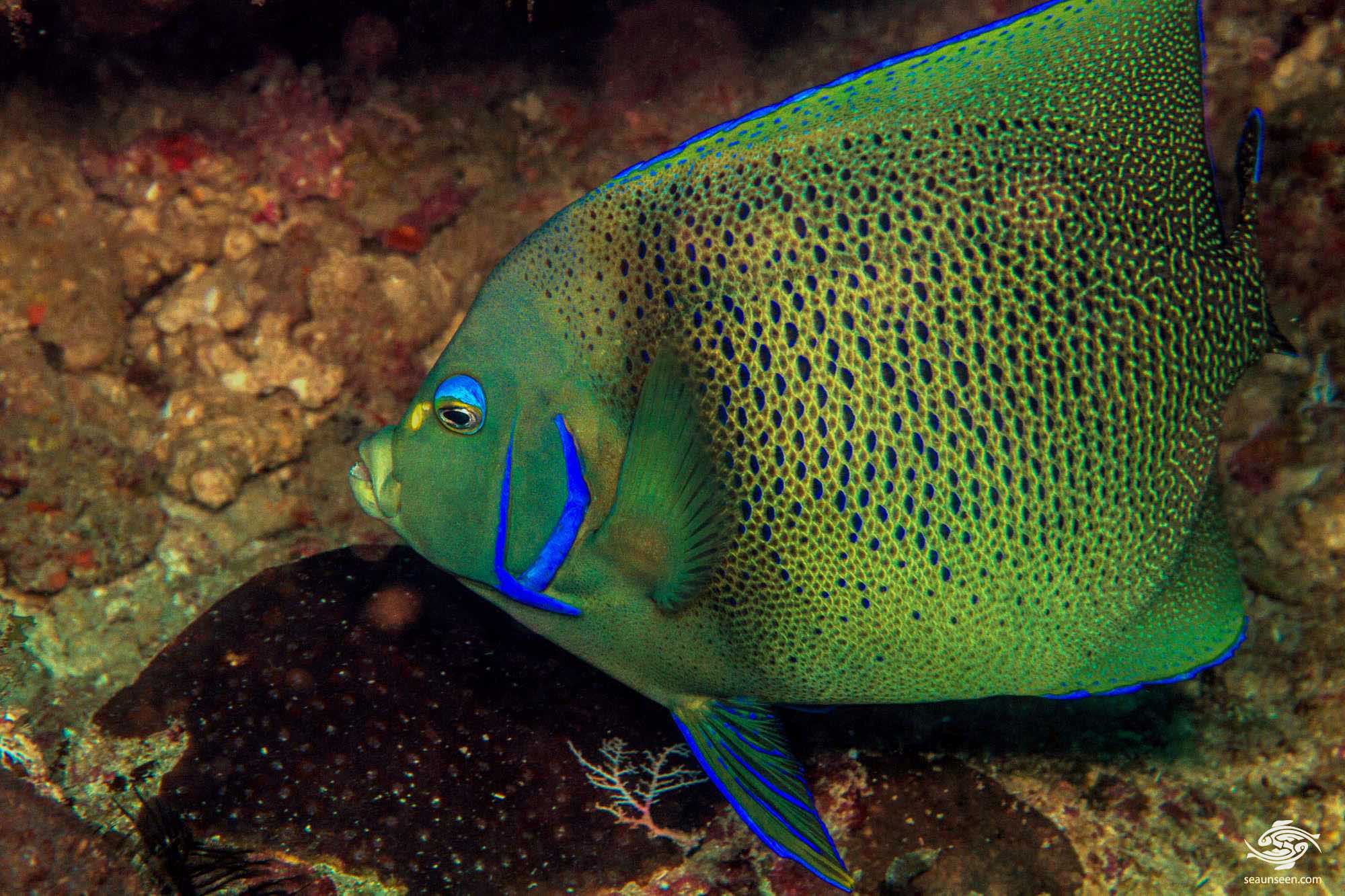 AQUARIUMS
The juveniles are popular with aquarists and are hardy and easy to feed. However they are not ideal for coral or reef tanks as they will nip corals and clam mantles. These fish are happiest in a large tank with live rock and lots of hiding places. In 2011 the University of Florida’s Tropical Aquaculture Lab succeeded in breeding captive specimens for the first time