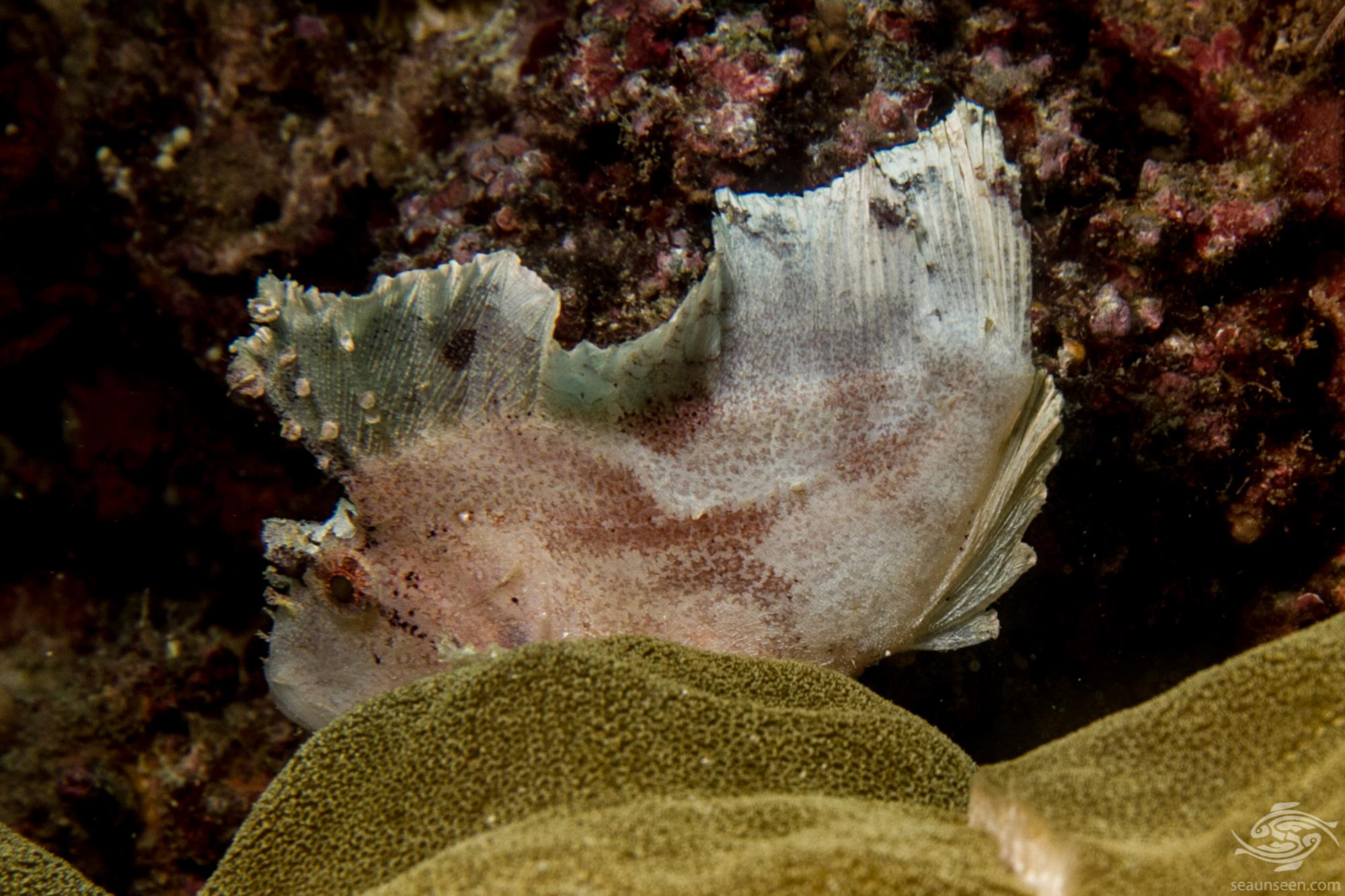 The Leaf scorpionfish Taenianotus triacanthus or Paperfish is an unusual looking fish. The body is highly compressed and because of this, from above it resembles a leaf or piece of paper hence its name. 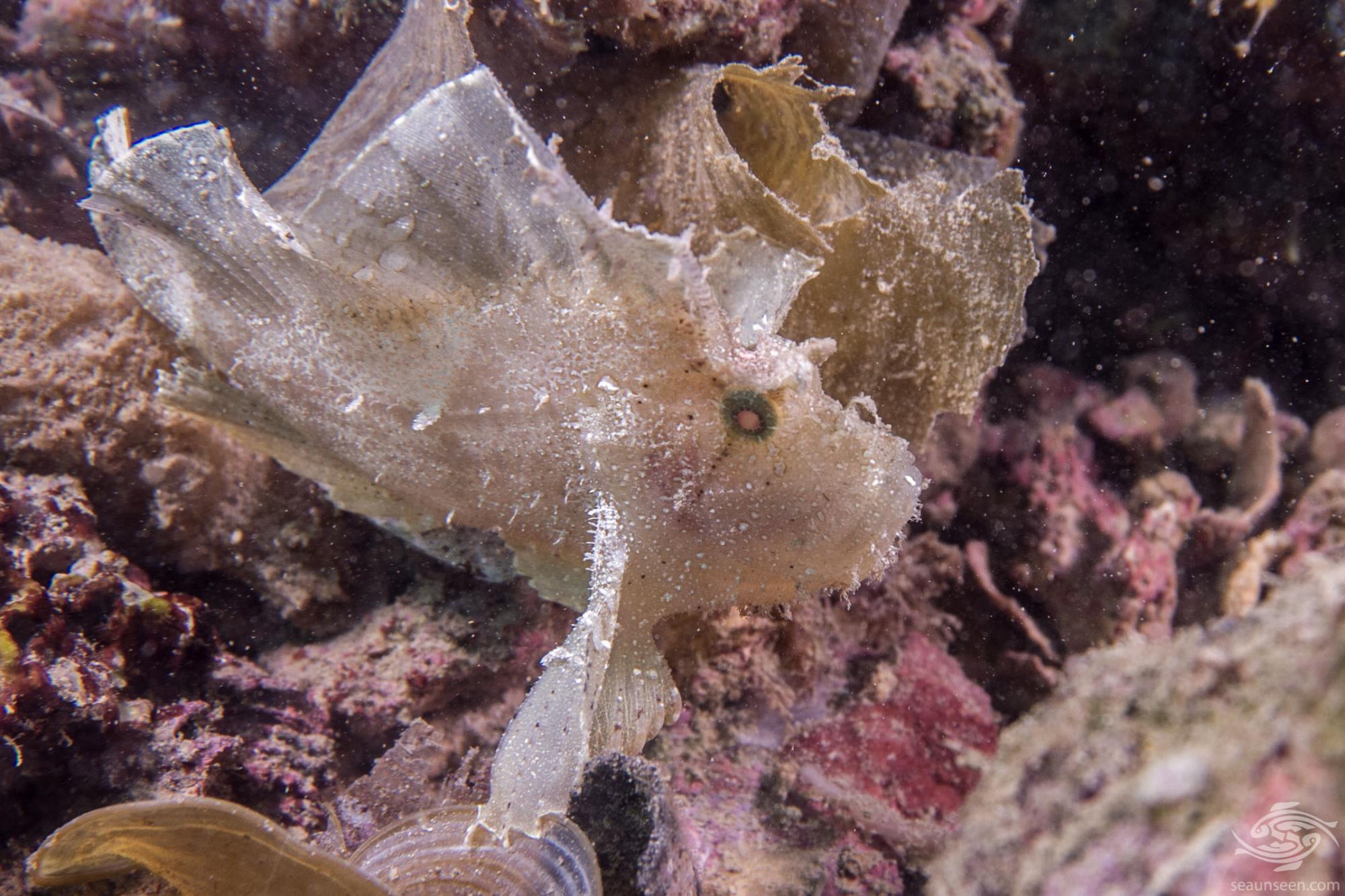 The leaf scorpionfish are one of the smaller scorpionfishes growing up to a maximum size of 10 cm. The body is laterally compressed and is quite thin, making them fairly fragile fish.  Their color is highly variable and ranges from white, yellow, brown, green and purple to red. They molt their skin every two weeks and have the ability to change color on the molt.  During the process of molting pieces of old skin stay attached to the body and assist in camouflaging them. 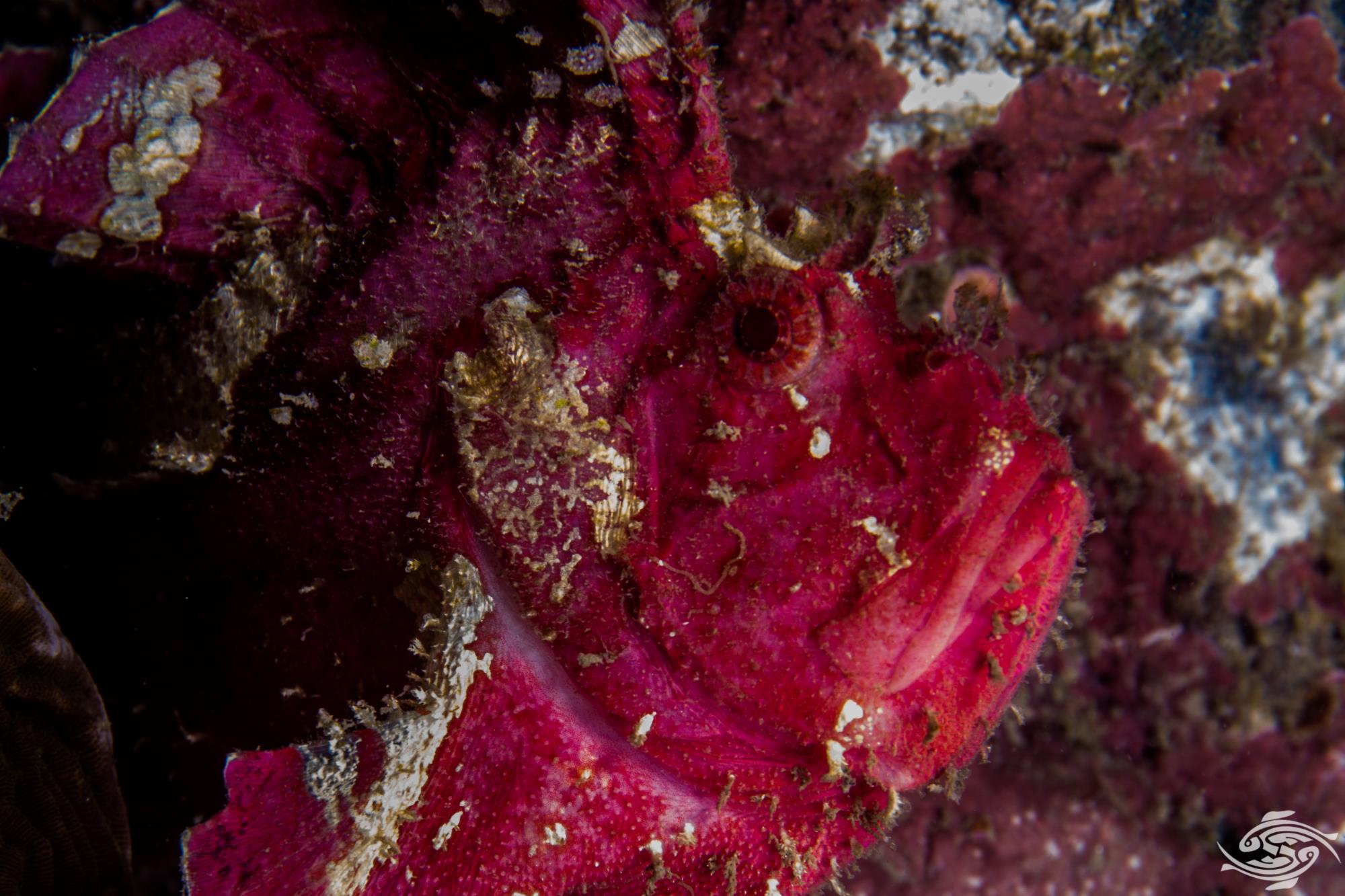 The dorsal and caudal fin are relatively large for its  size and the caudal fin often sticks upwards. The caudal fin has adapted more for camouflage than swimming and they are poor swimmers. The pelvic fins are also large for its size and these are used to wedge its self into position. As one would expect from an ambush predator, the head and mouth are comparatively large. There are several small appendages on the head that assist with camouflage. When a light is shone directly on the eye, it reflects a light pink colour. 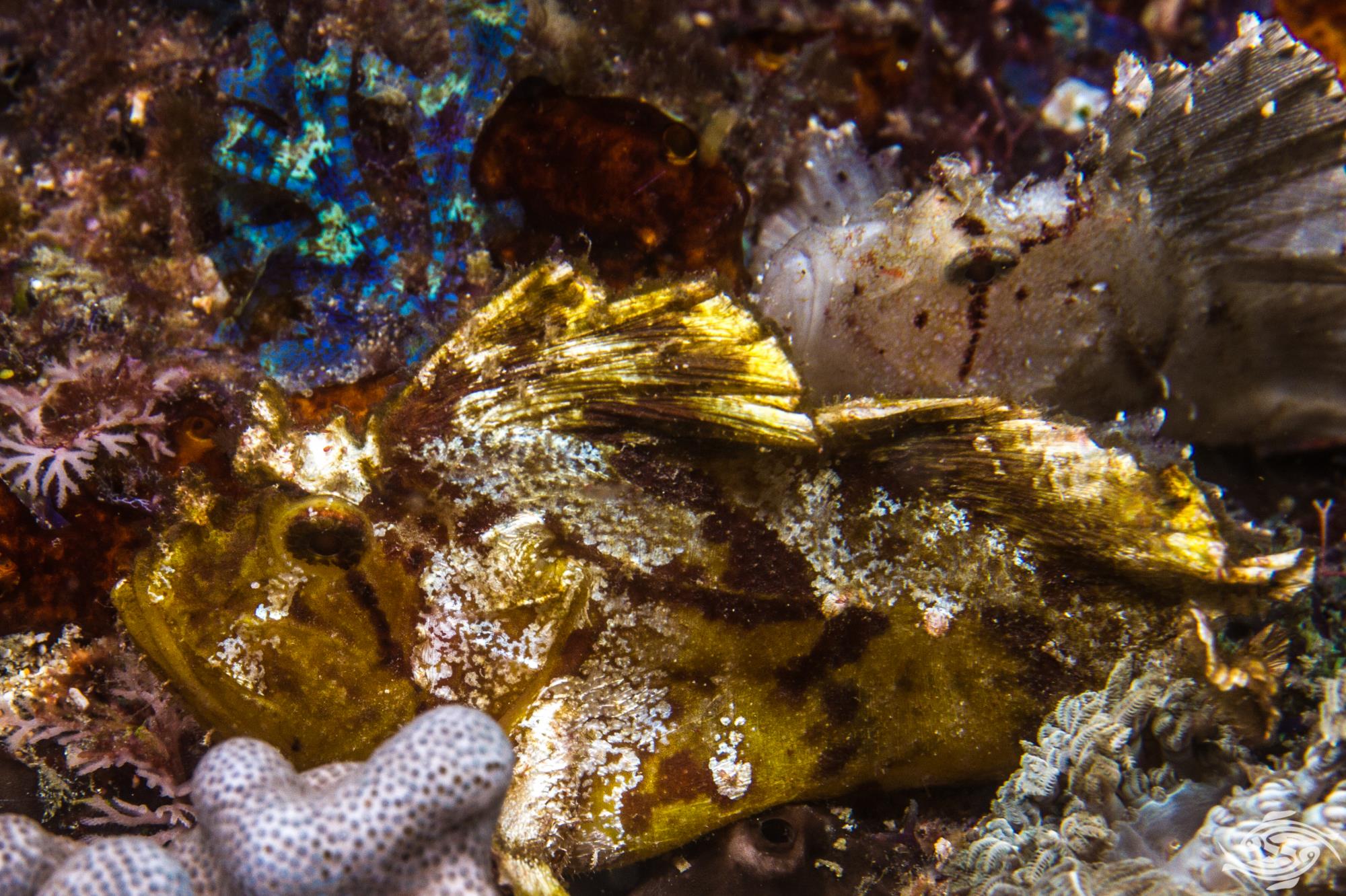 The leaf scorpionfish are usually found in crevices on larger rocks or coral bommies containing caves. The caves usually contain large numbers of small nocturnal fish such as sweepers and cardinalfish that move around the area. These make easy prey for the Leaf Scorpionfish.  The leaf scorpionfish usually wedges its self into a spot and then rhythmically sways from side to side with the surge. Sometimes even if there is no surge they still move as if there was one. 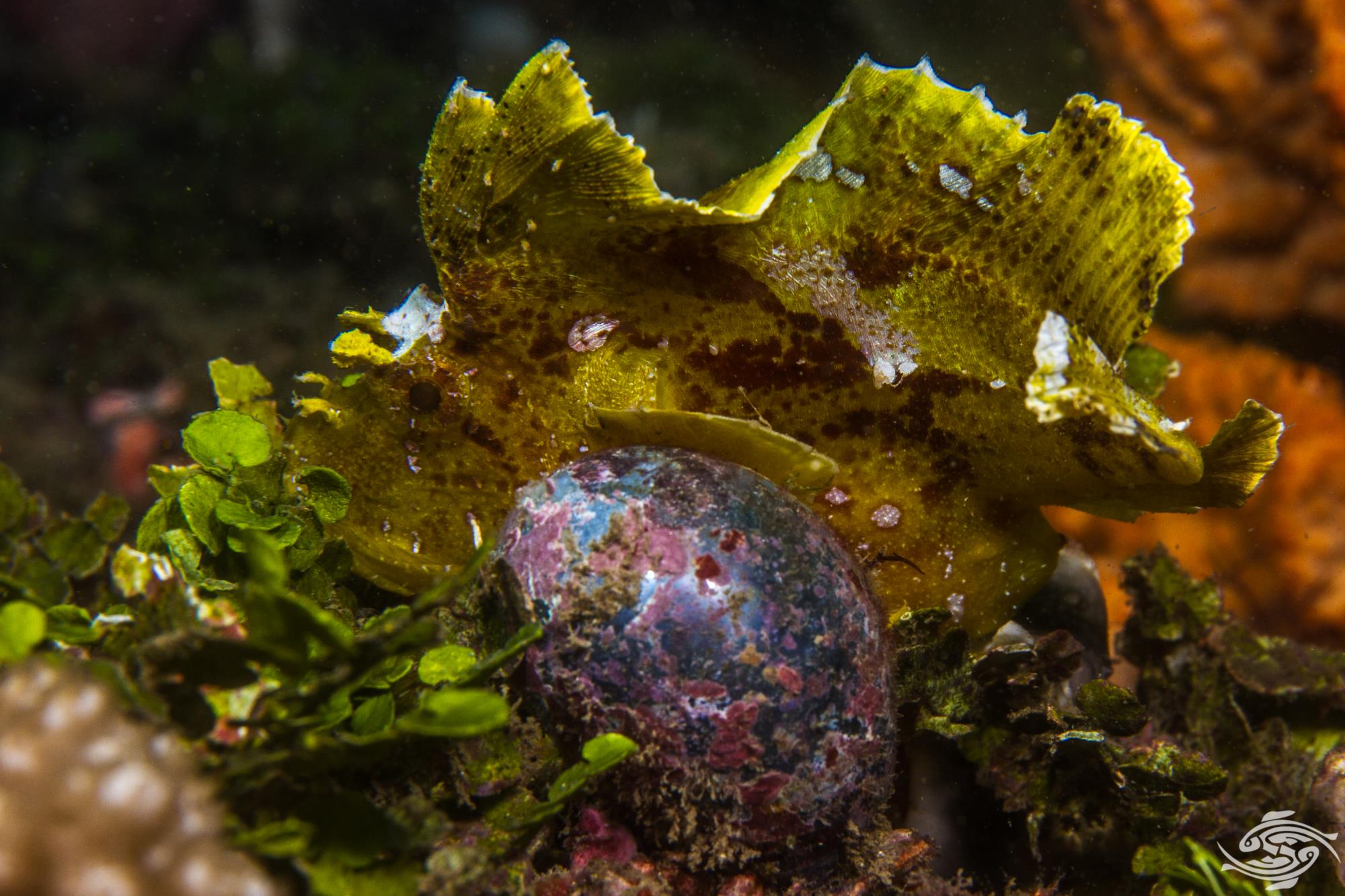 Despite their often vivid coloration they are not always that easy to spot and their camouflage is very effective. They tend to move by hopping or walking with their fins rather than swimming and because of their shape are not strong swimmers. Once their prey is within range they jump or hop towards it, sucking it into their mouths. 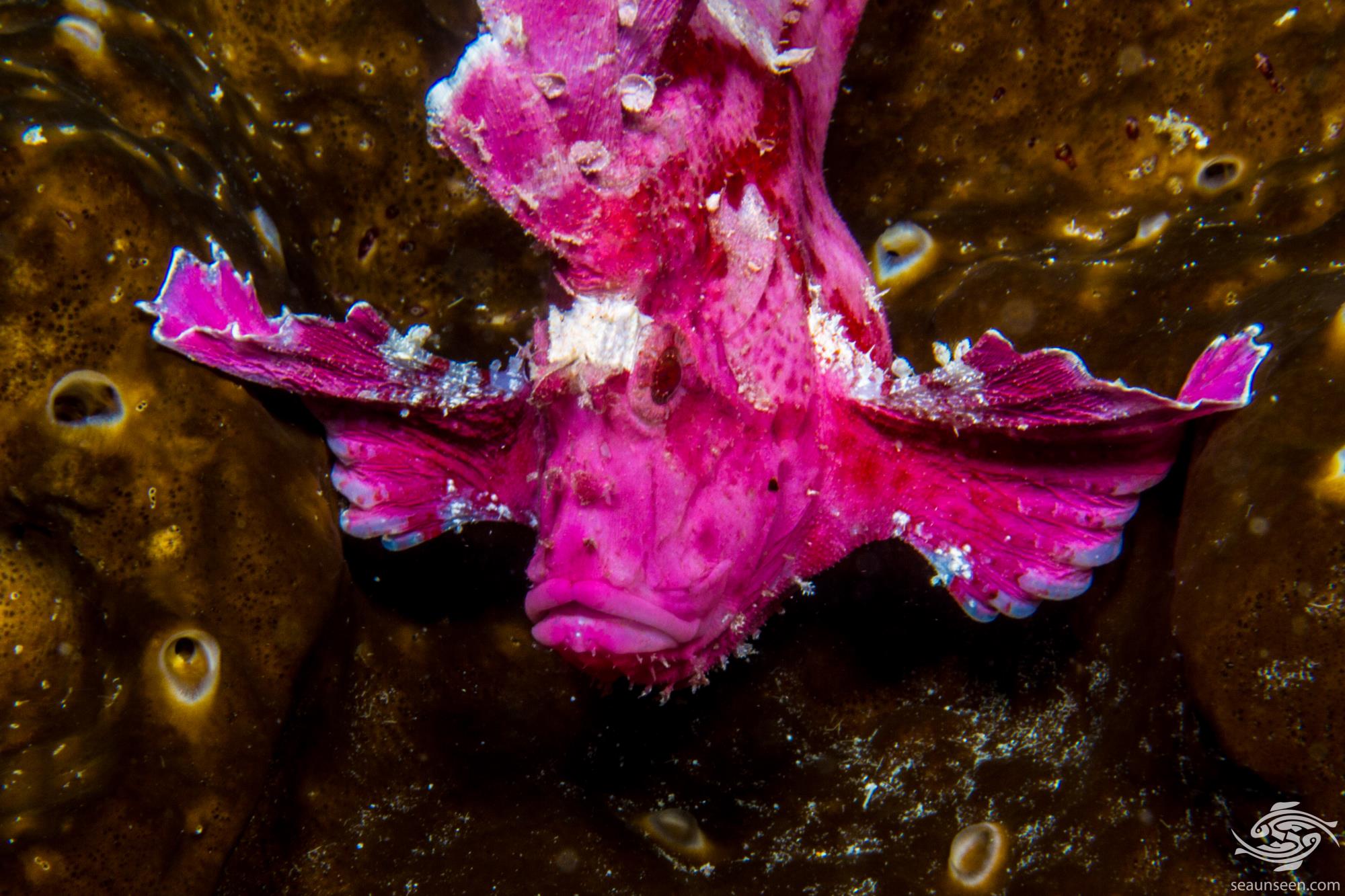 The poison in the spines is reportedly not as strong as the other scorpionfish but is still best avoided. They are reasonably common in Tanzanian waters. Once one learns where and how to look for them they are spotted quite frequently on dives.

The leaf scorpionfish is found across the Indian ocean and in the west Pacific. They inhabit coral reefs from a depth of 2 to 130 meters. Surge areas of the reef that provide them with passing prey are their favorite spots. 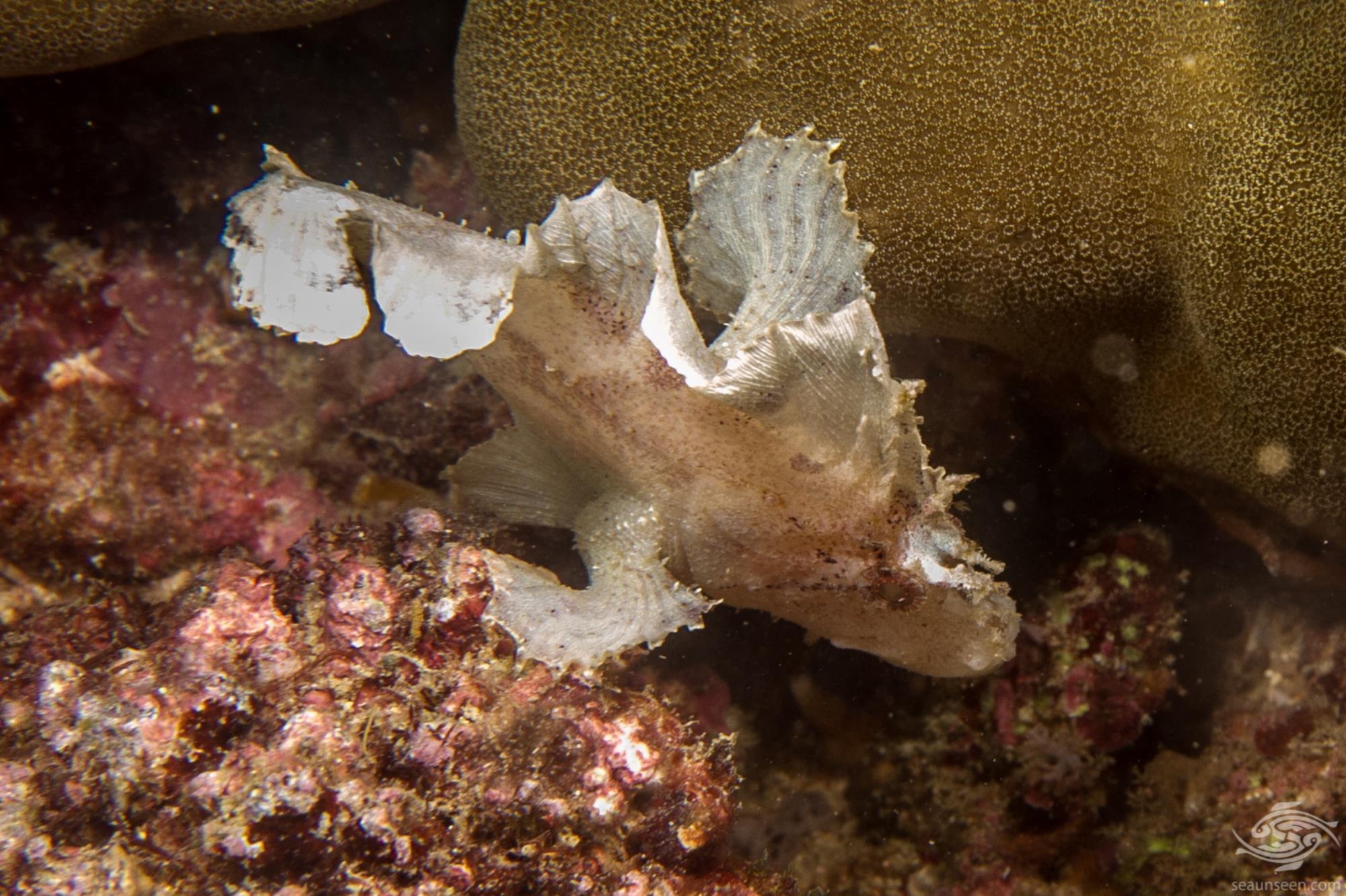 Their diet is composed of small fishes and crustaceans. 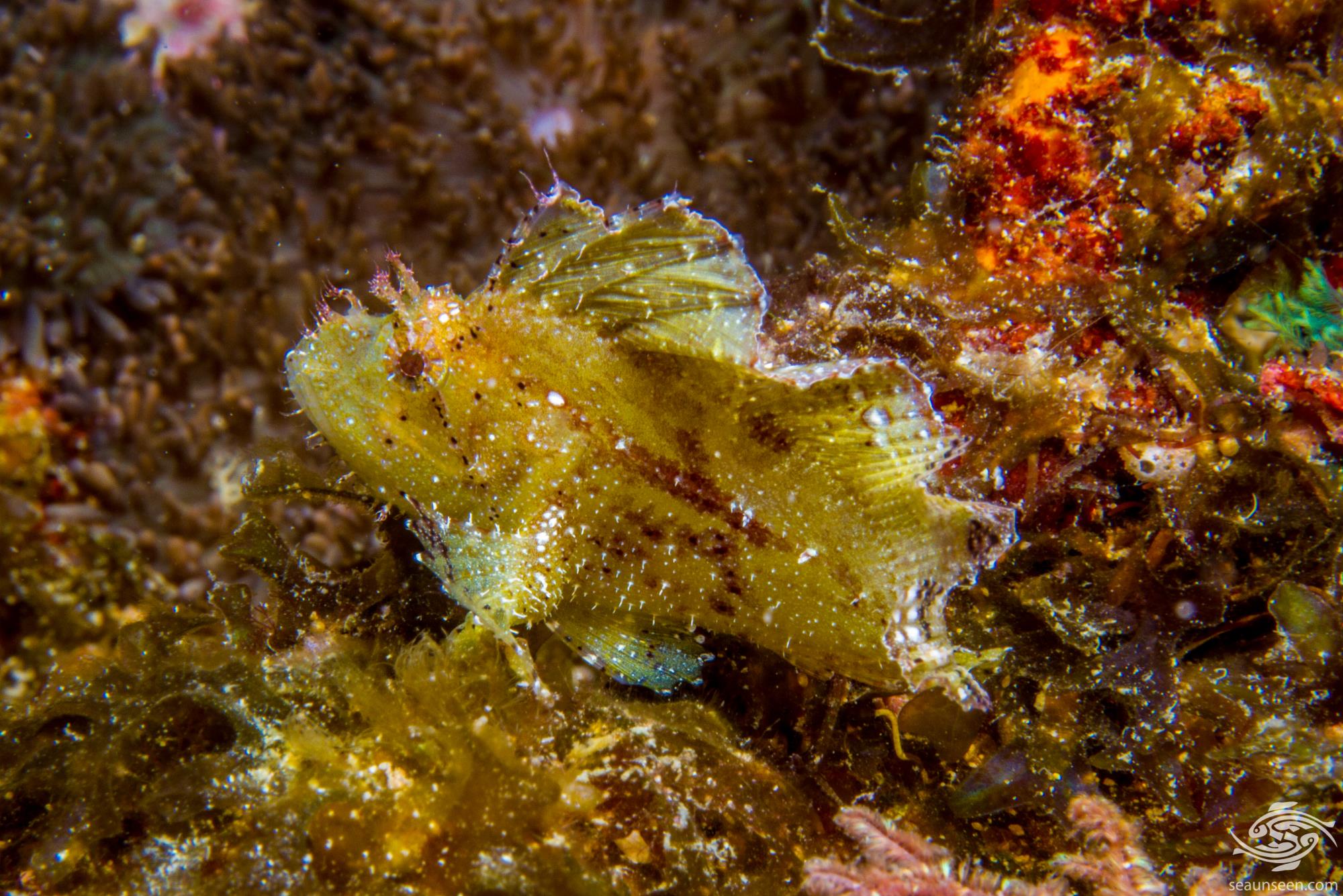 Scorpionfish are oviparous with females producing eggs that are released into the water table  and fertilized by the male. They then float near the surface until they hatch. Little else is known about Leaf scorpionfish reproduction. 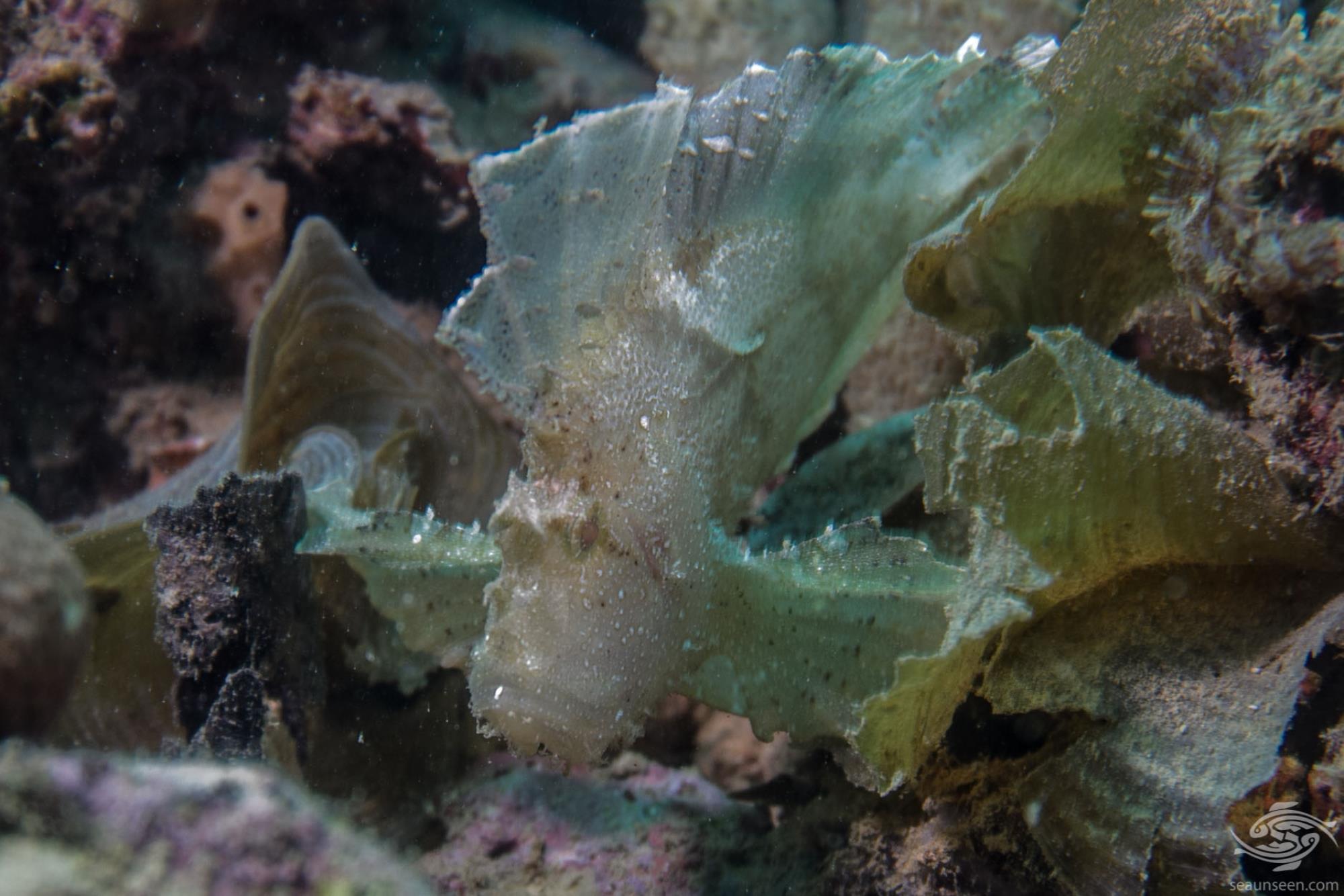 With their unusual shape and habit of swaying, Leaf Scorpionfish make an attractive addition to a tank. They will eat any fish or invertebrate that fits into their mouth and one has to be careful with their tank mates. They are relatively easy to wean off of live foods and can be kept by intermediate  aquarists. Because of their small size they may be bullied in a tank and care has to be taken choosing their tank mates. In the wild they are often found in crevices where they wedge themselves with their pelvic fins. A tank should contain such hiding places for them. 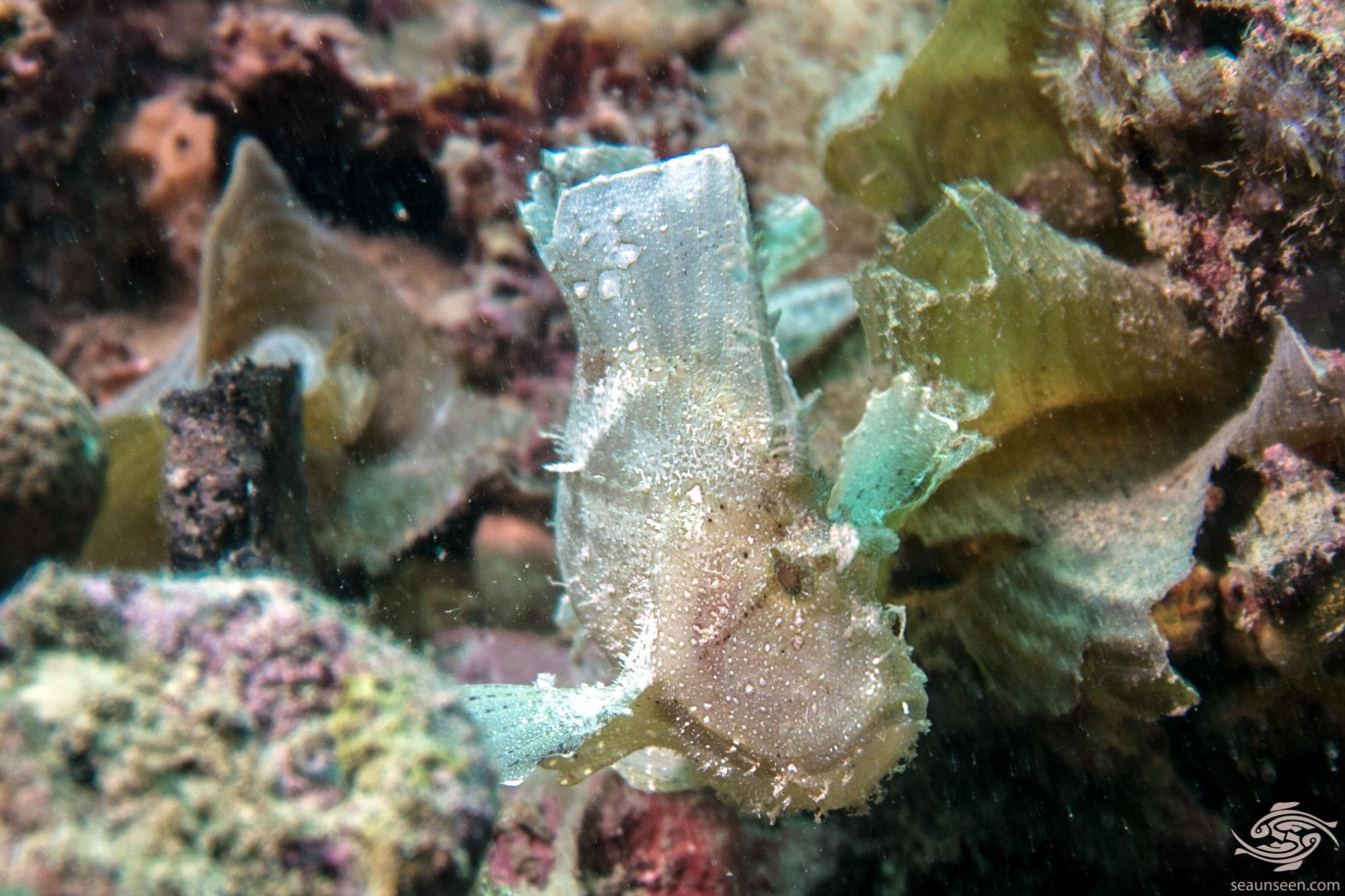