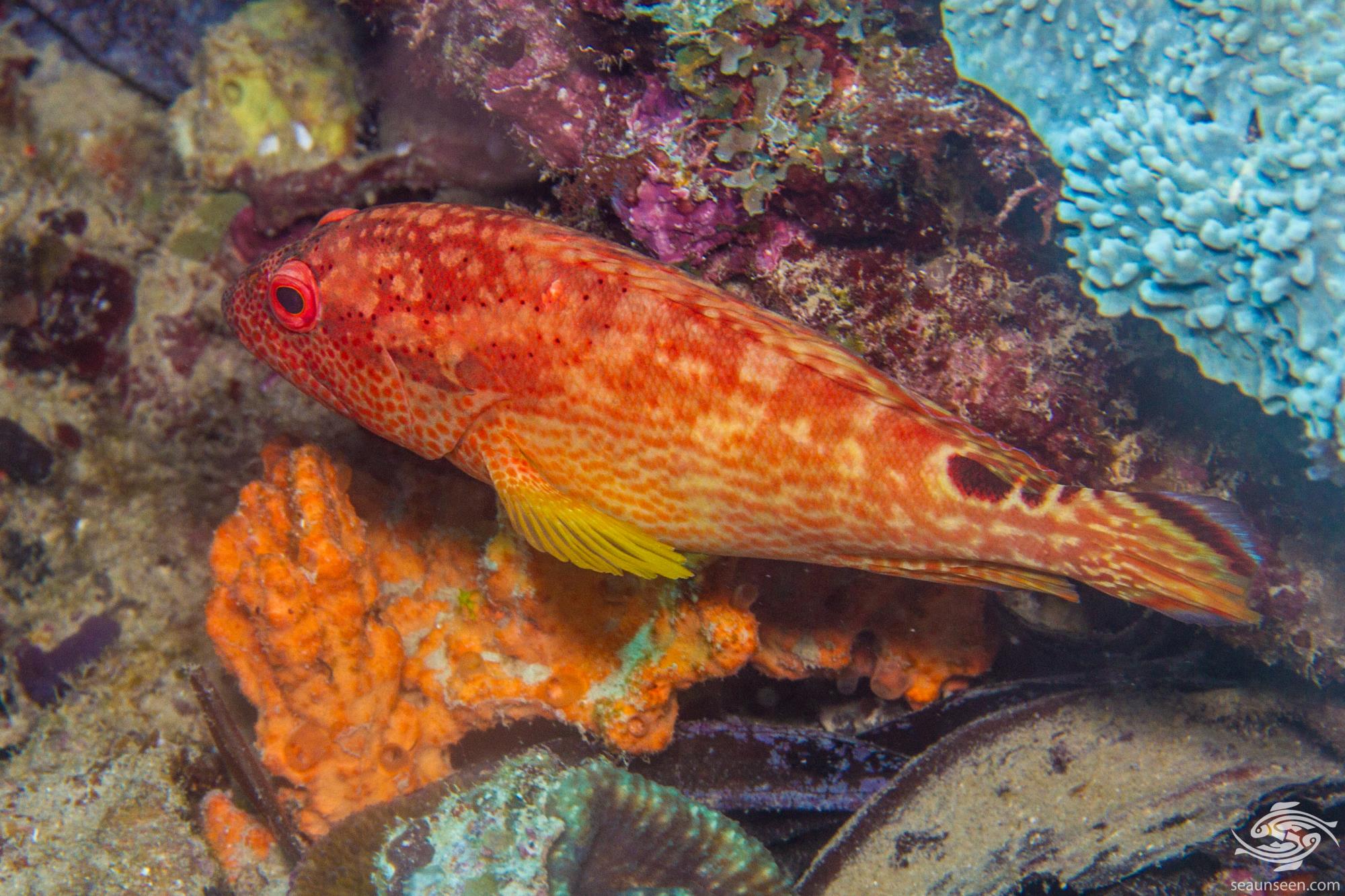 The Leopard Grouper (Cephalopholis leopardus) is also known as the Leopard Hind and the Redspotted Rock Cod. They are one of the smaller members of the Cephalopholis genus and are not common on the Tanzanian coast outside of the Marine Parks.

The Leopard grouper has a typical grouper shape and like many other groupers can lighten or darken its coloration depending on its mood. It’s typical colouration is a pinky colour with light pink blotches across the upper body. There are  pink spots below the mouth extending backwards along the lower body.  Behind the eye there are a series of random dark brown spots across the upper body. The pectoral fins are yellow and the caudal fin has two lines which taper backwards on the fin. On the upper caudal peduncle just behind the dorsal fin there is a dark blotch or in some specimens a series of blotches.

As with all grouper they have a proportionally large mouth designed for swallowing their prey whole and they have a row of proportionally small teeth in the front of their mouth. They are one of the smaller grouper and their maximum length is 18.5 cm. 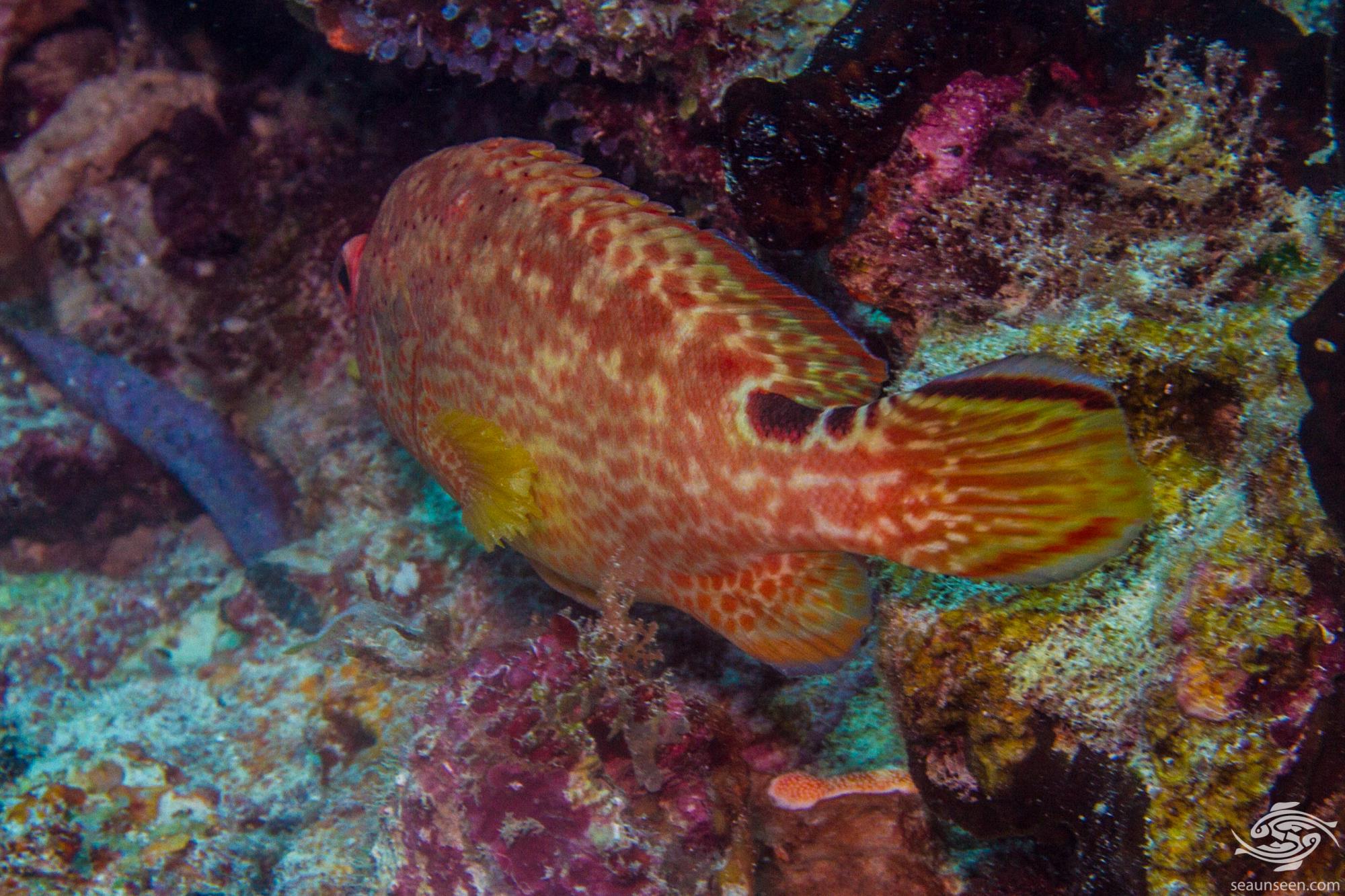 LEOPARD GROUPER IN THE WILD

In Tanzanian waters, the Leopard grouper is usually found below 10 meters in depth. They are not common but seem to be numerous in some areas, particularly the protected Marine parks. They are seldom seen outside these areas. 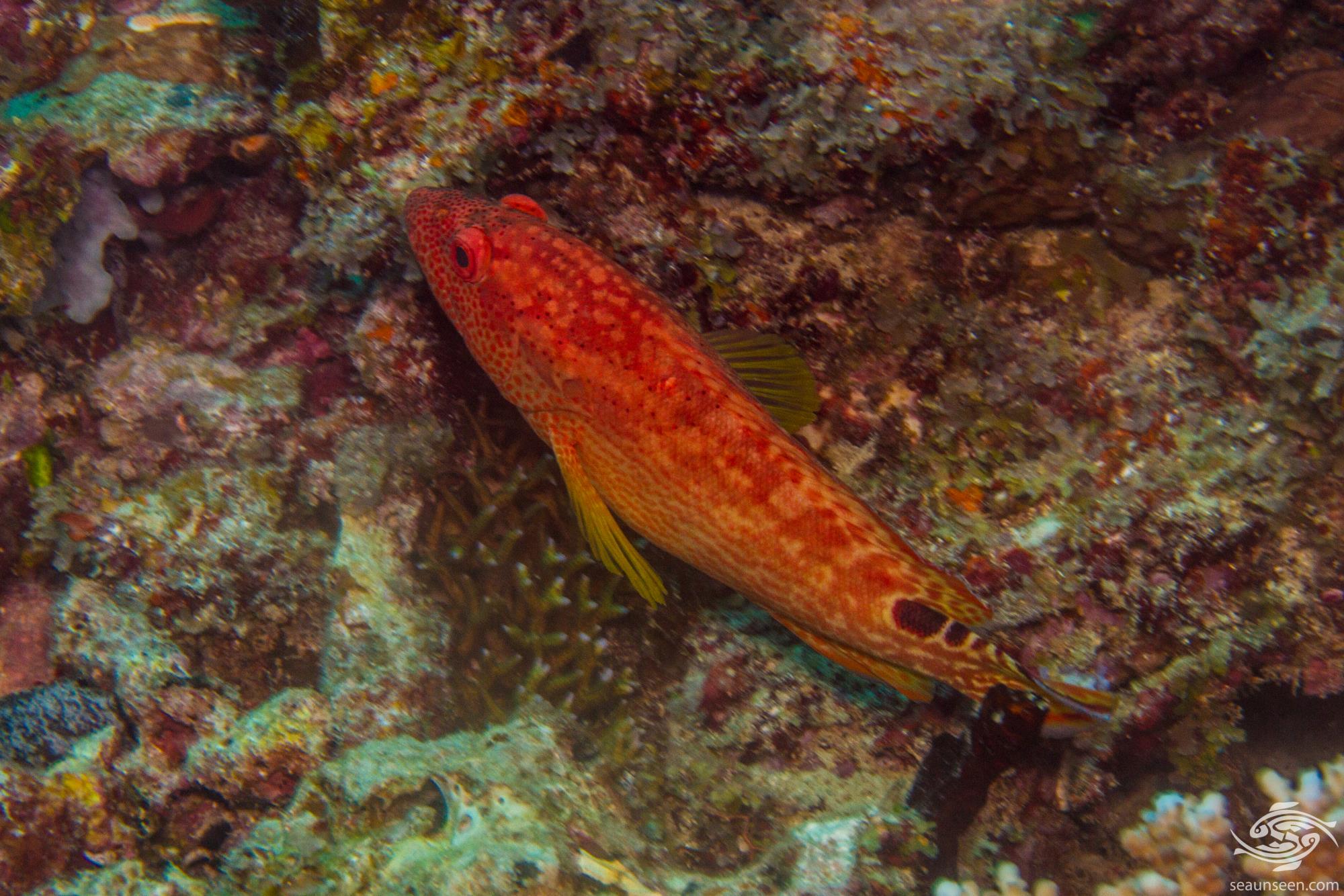 Leopard grouper are found on the East coast of Africa from northern Mozambique northwards to  Kenya and possibly the Somali coast, eastwards the west coast of Madagascar and across to souther Japan in the north down to Western Australia and across to the the mid Pacific including most islands. They are typically found on deeper exposed reefs rather than in protected areas or estuaries. They are found from 1 meter downwards to 40 meters.

Their main diet is small fishes and crustaceans, however given they are caught by fishermen on the hook this indicates that they will scavenge as well. They are ambush predators and feed in the early morning and late afternoon when their coloration gives them more camouflage. Red light is filtered out by the water after about 5 meters and their red colours provide good camouflage underwater. 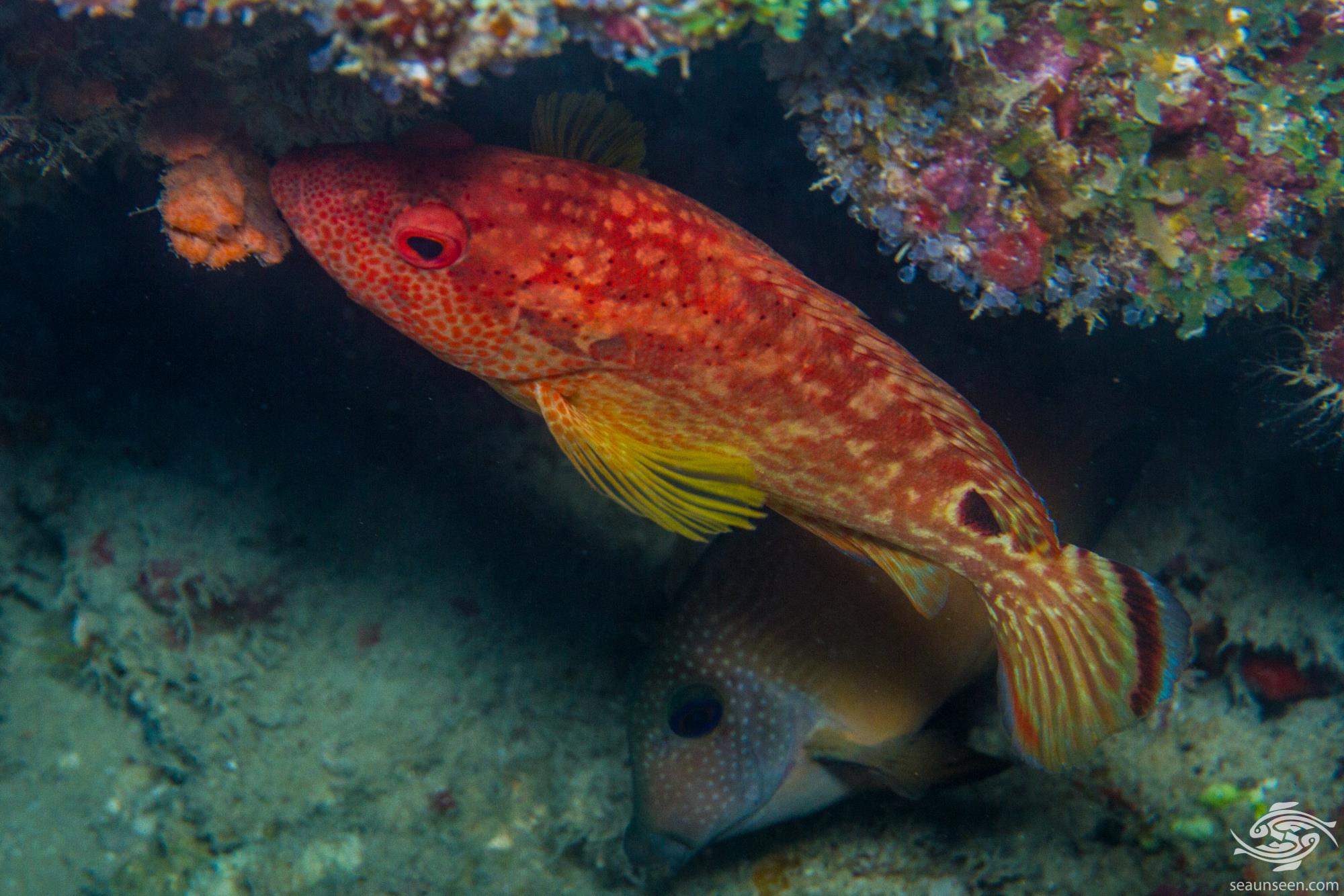 Little seems known of their breeding behaviour but they probably follow most other groupers s and mate in the late afternoon to just after sunset with mating taking place between a single male and multiple females.  The eggs are released into the substrate.

The Leopard Grouper is fished by local fishermen and in most areas of the Tanzanian coast is heavily over fished. If one dives in the Marine Park on Mafia Island there are noticeably far greater numbers of this species inside the park. 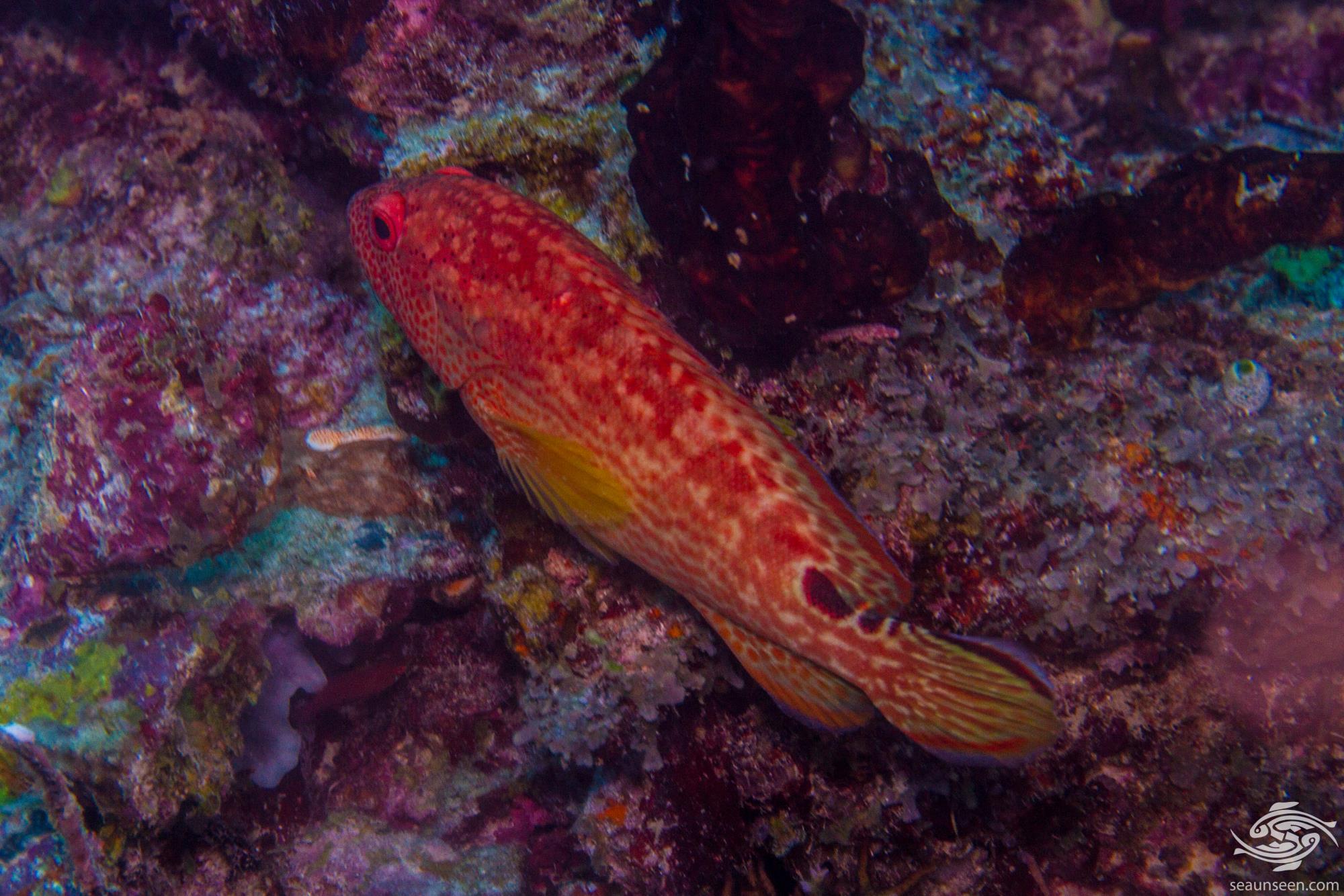