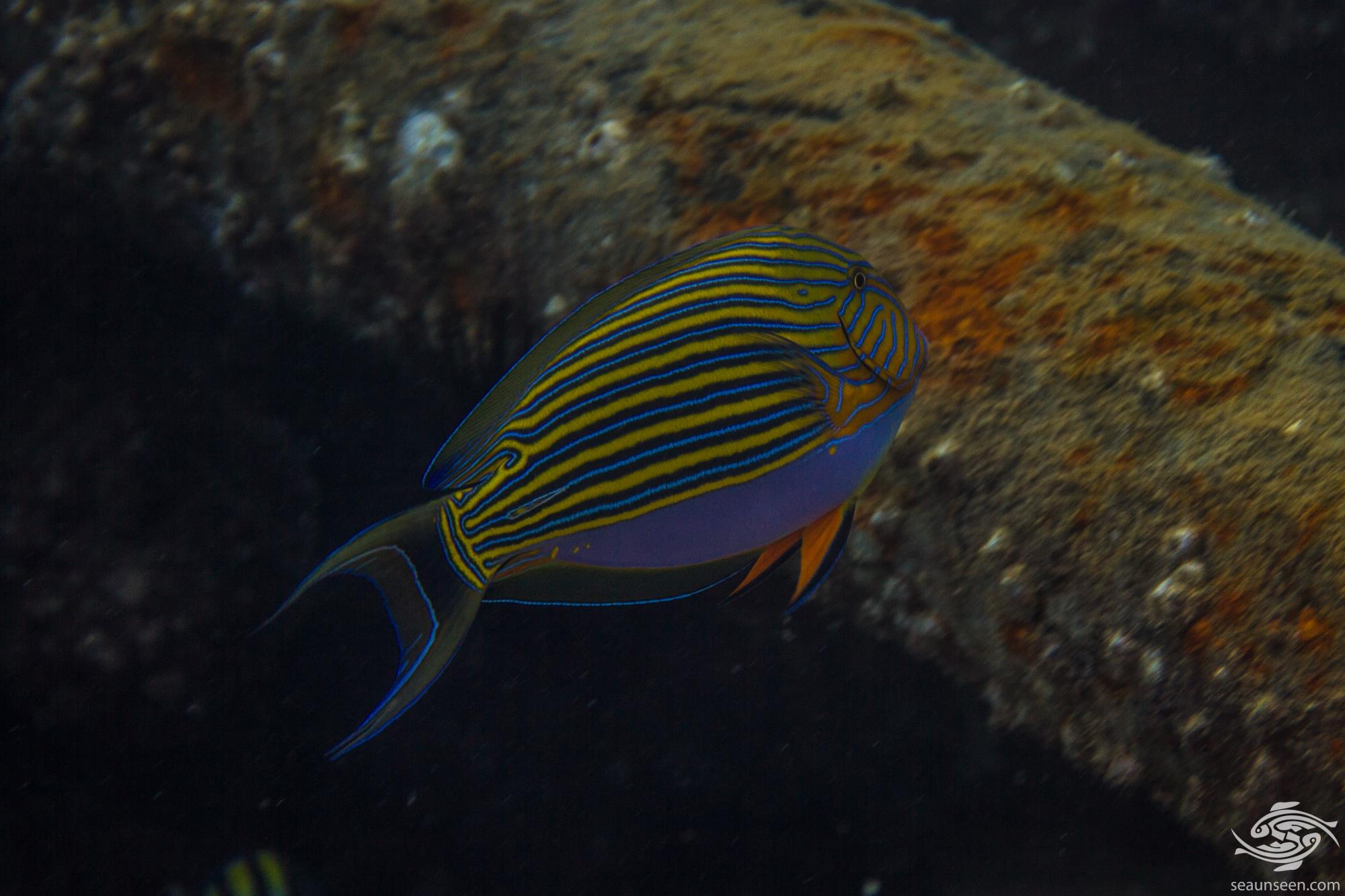 The Lined Surgeonfish (Acanthurus lineatus) is also known as the Clown Surgeonfish, the BlueBanded Surgeonfish and the Striped Surgeonfish. Members of the Acanthuridae family have a retractable razor sharp spine on either side of the caudal area. They obtain their name Surgeonfish from these blades.  The blades are used for defense and possibly in territorial disputes and can inflict significant damage. The blades are reported to contain toxins but there seems no scientific evidence for this. 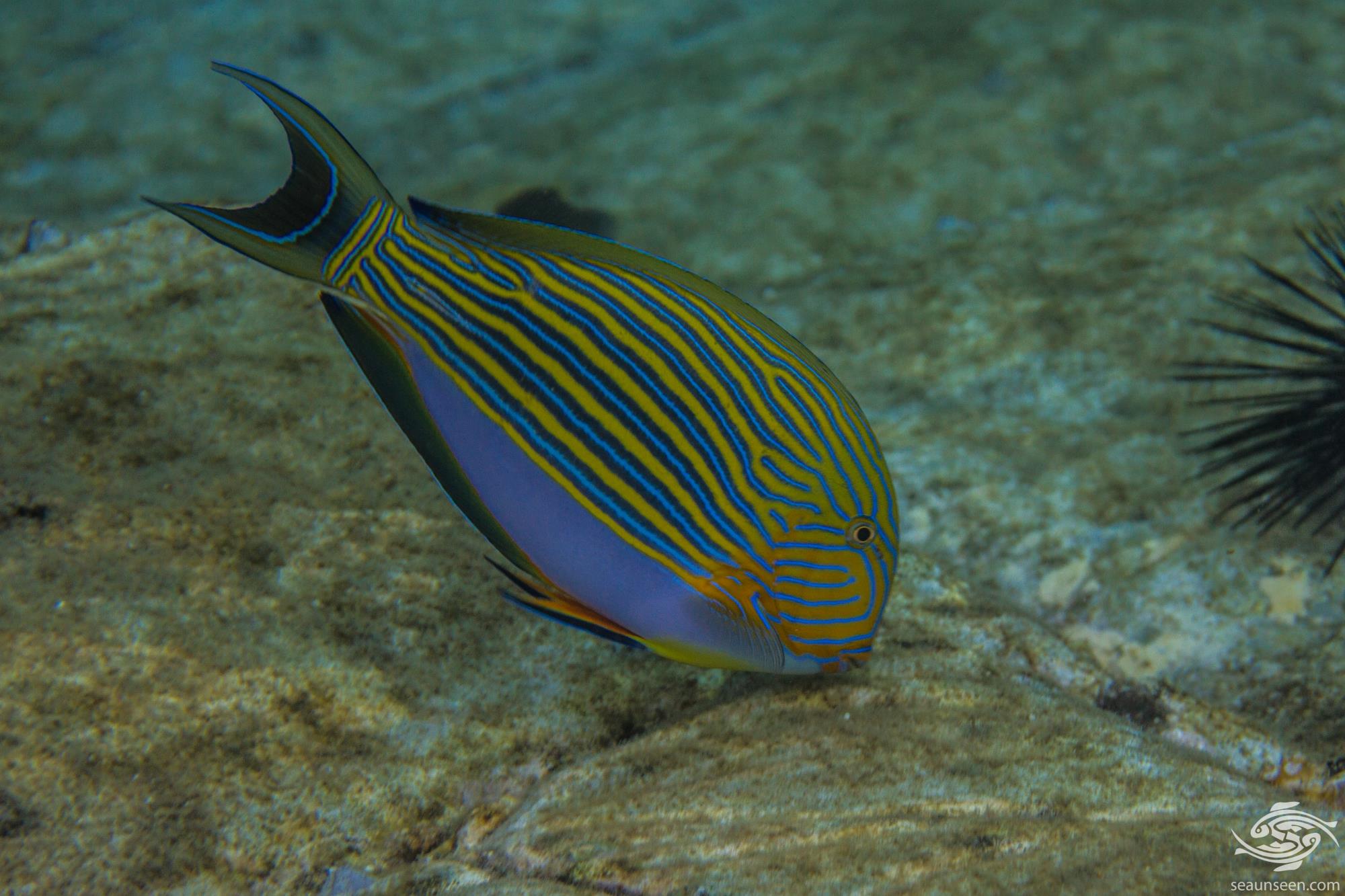 The Lined Surgeon has an elongated oval body tapering back onto a lunate caudal fin with a laterally compressed body. The head area is rounded and the mouth protrudes slightly. Their lower belly area is a bright light blue color whereas the upper body has a yellow background. The head area has a series of blue horizontal lines across it and the remainder of the body has horizontal blue lines with black margins across it.  They are extremely attractive looking fish with their bright coloration. They grow up to 38 cm in length but around 30cm is more common in the wild. 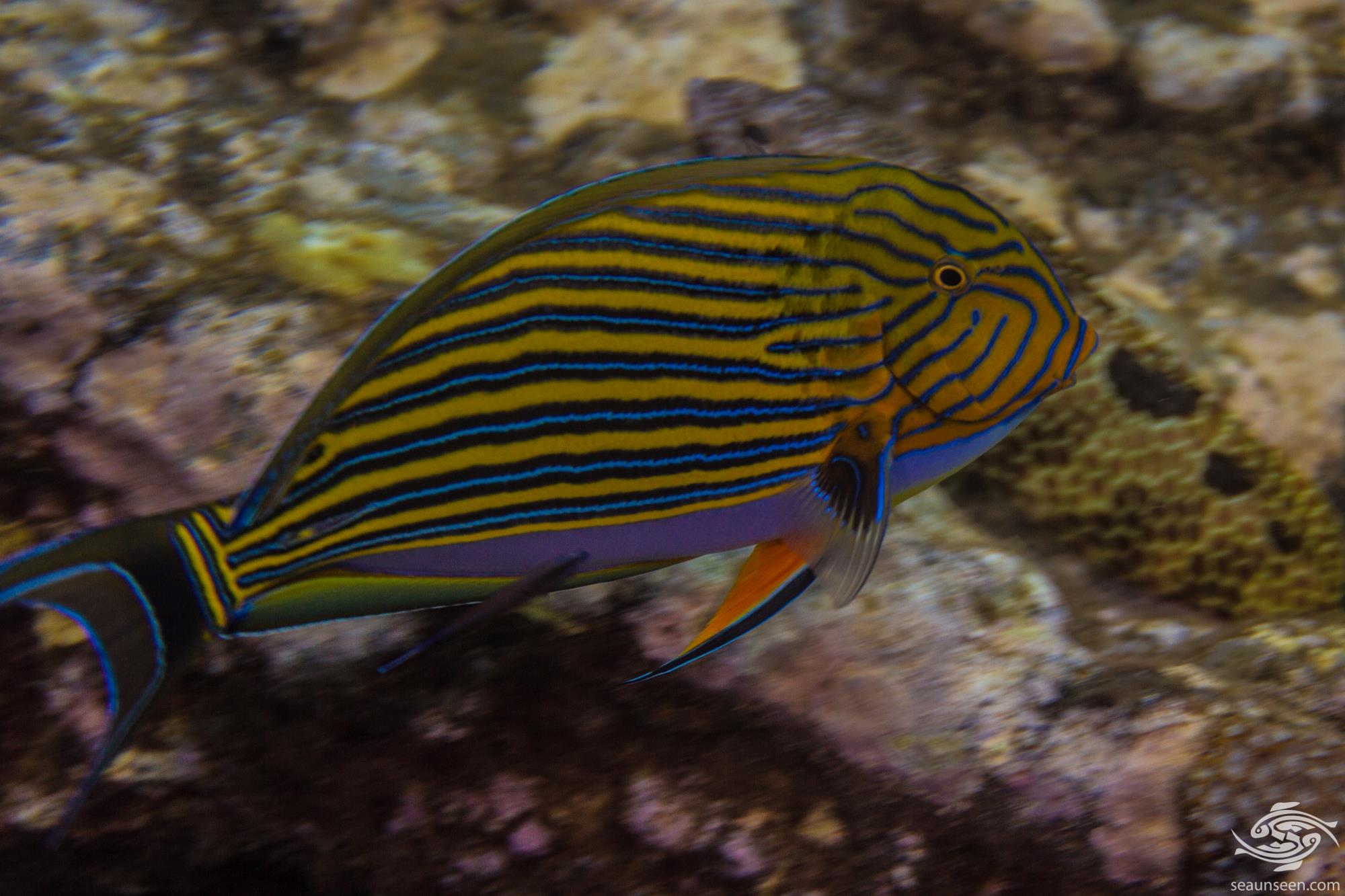 LINED SURGEONFISH IN THE WILD

The Lined Surgeonfish is not that common overall in Tanzanian coastal waters, but in certain areas in which conditions seem to favor them they can be seen in fairly large numbers. They seem to prefer larger reef structures with plenty of flat surfaces on them. The juveniles up to 15 cm or so are usually seen singularly but as they grown larger they form groups with one larger male and several females.

They are extremely active fish, always on the move and always feeding. The males move around their territory more than the females and seem to spend a fair amount of time patrolling. The juveniles are more shy than the adults and can be difficult to approach. 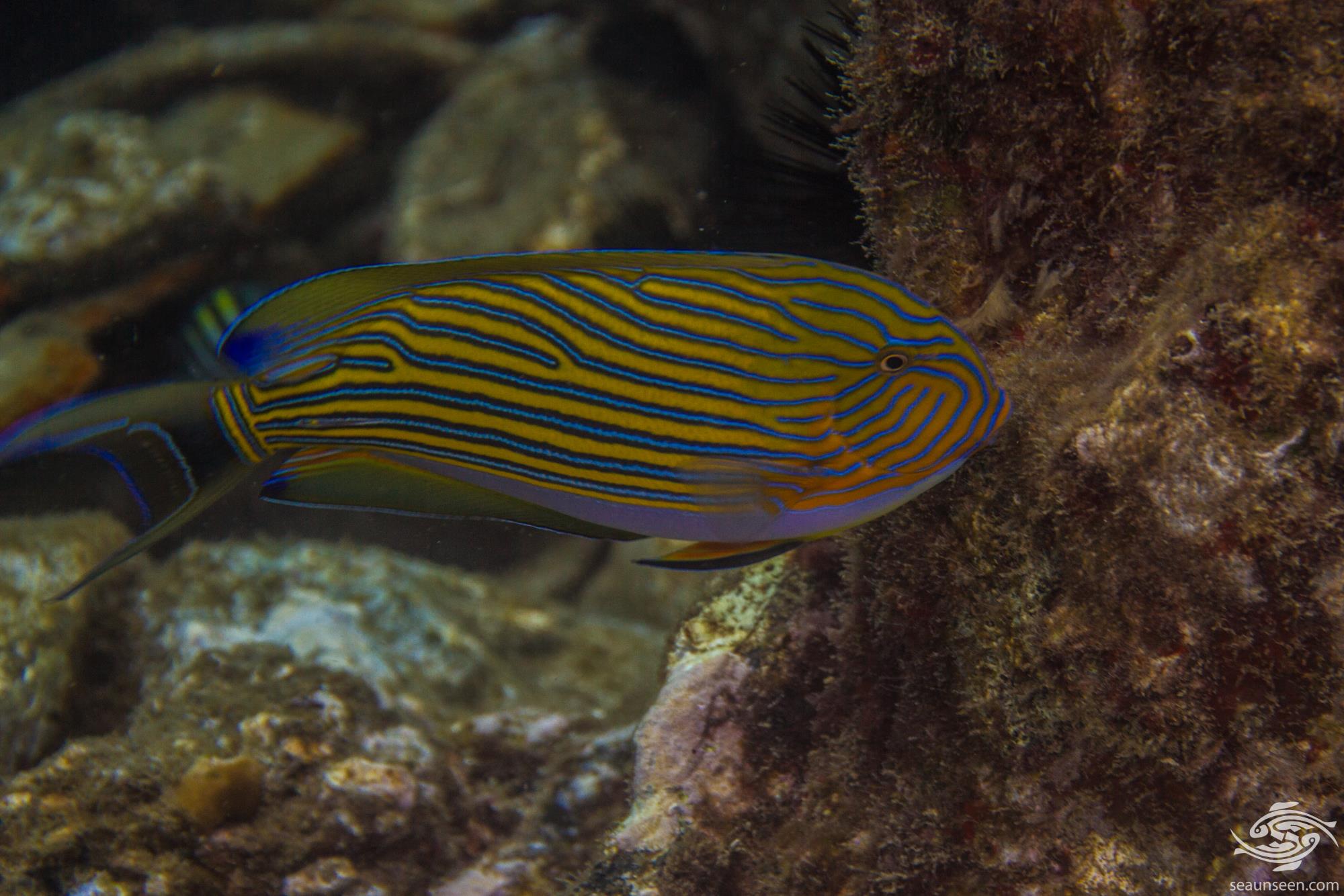 They are found across the Indo West Pacific area from East Africa to Southern Japan and across to French Polynesia and have been recorded in Hawaii. In Tanzania they are most common around the 5 to 8 meter range on shallow reefs with abundant algal growth and generally some wave action. 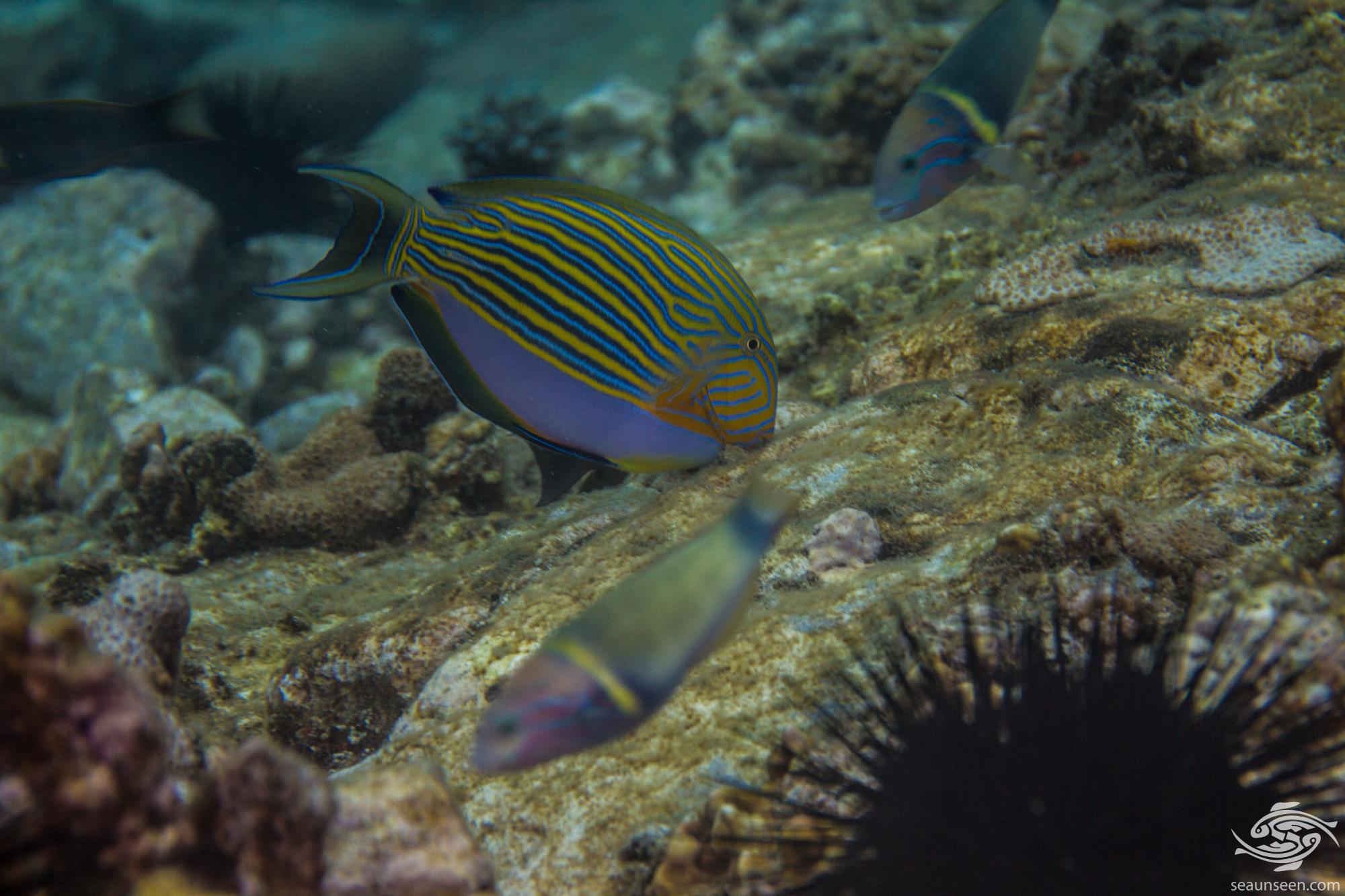 The Lined Surgeonfish predominantly feed on algae although there are reports of them eating small crustaceans. In the images they can be seen feeding. They are quite selective about what they eat and move along the reef until they spot something they like. They obviously have strong preferences in the diet. 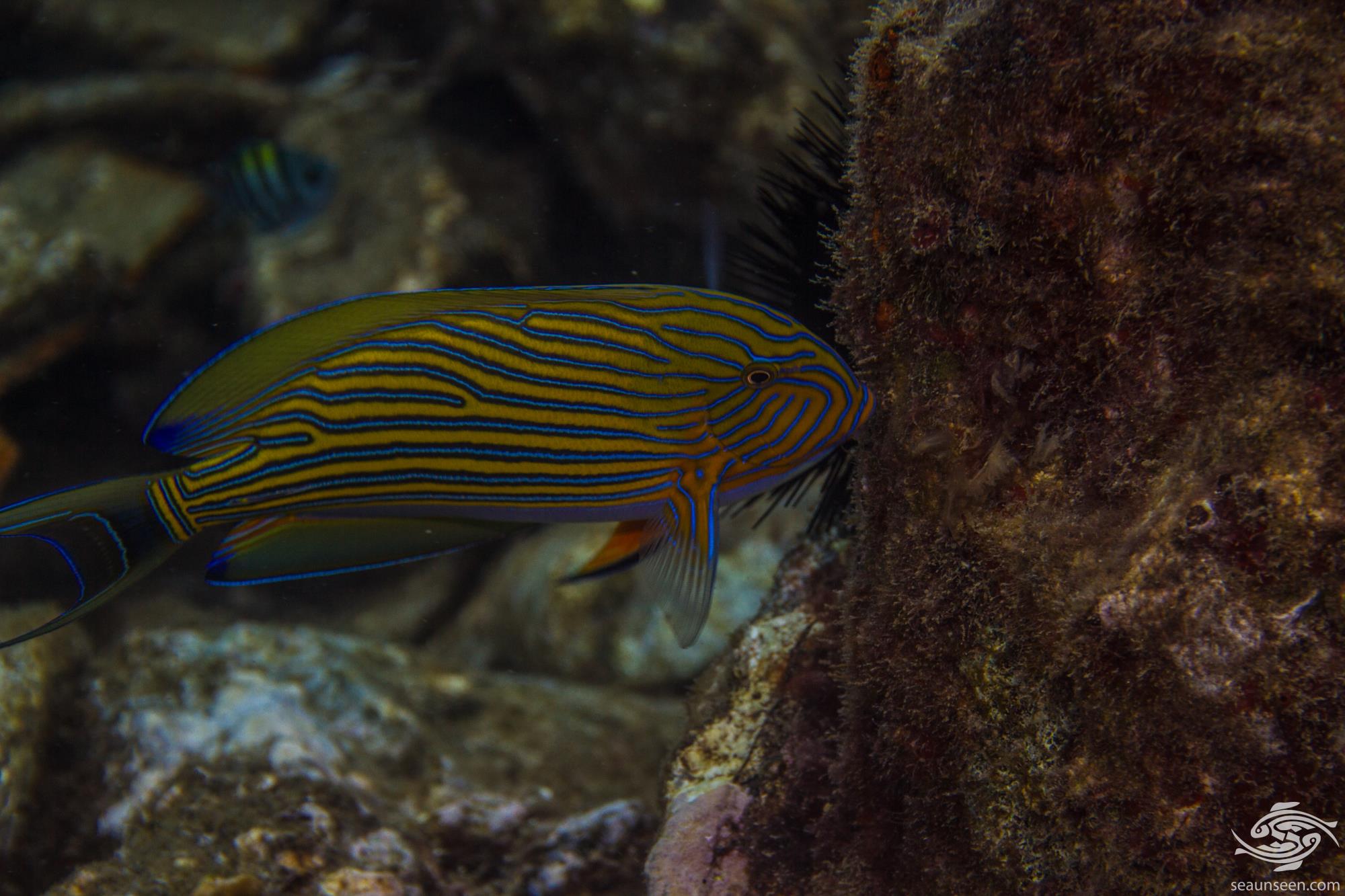 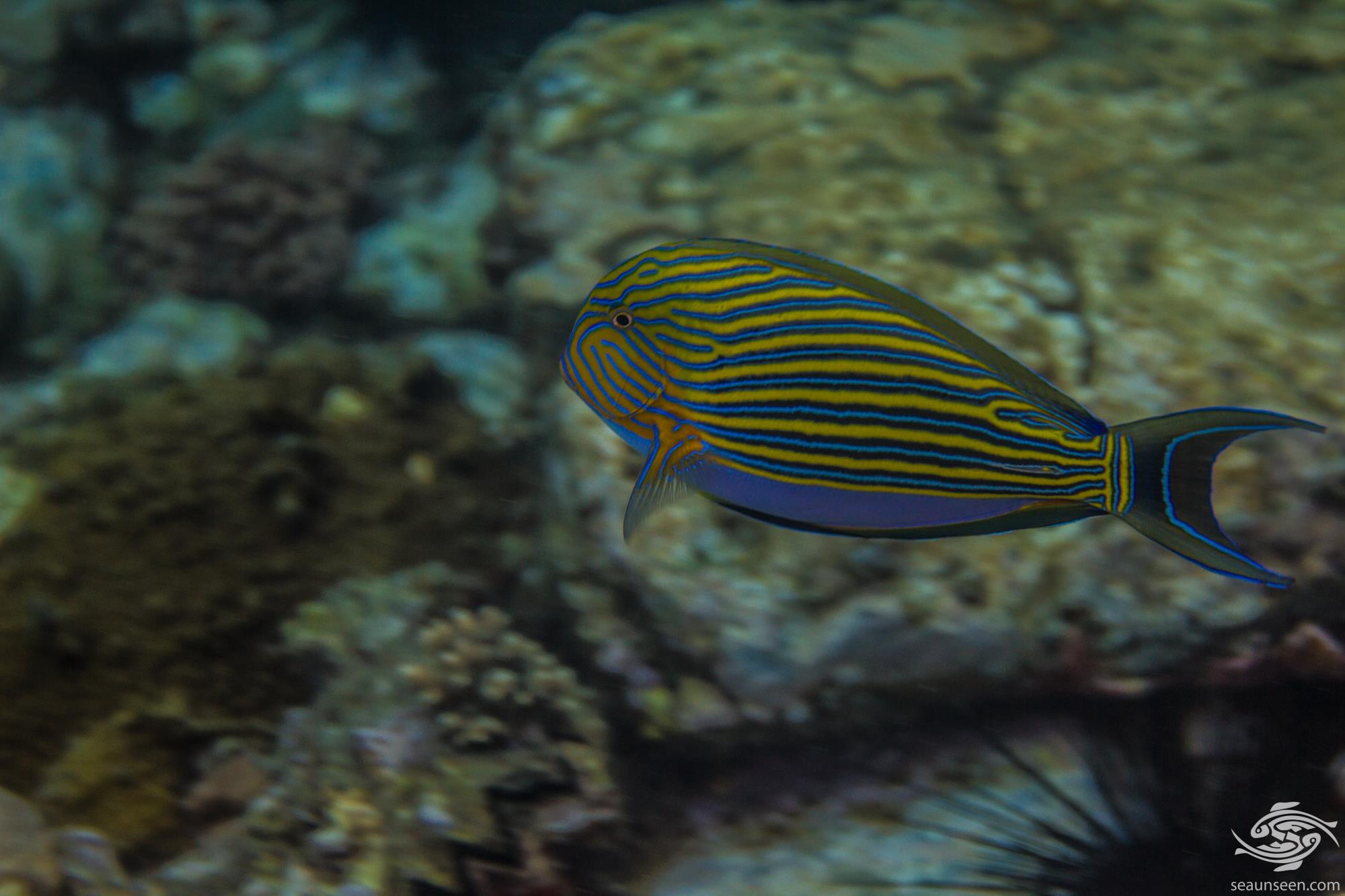 Lined Surgeonfish are commonly kept in aquariums and in the trade they are known as Clown Surgeonfish, perhaps a more commercially attractive name. They require high quality clean water that is well oxygenated. They are fairly easy to feed but a big part of their diet should be algae in one form or another to keep them healthy. Because of their highly territorial nature they should not be kept with fish with a similar shape or diet.

Great care should be taken when moving them as their blades can easily snag in a net or worst case pierce a bag. There is a good article on the problems associated with keeping these fish here.  I once had the opportunity while snorkeling on a shallow coral Bommie to watch one of these fish for some 15 minutes. It hounded and attacked several fish of different species that came near it and the territorial nature is likely to be worse in a tank. 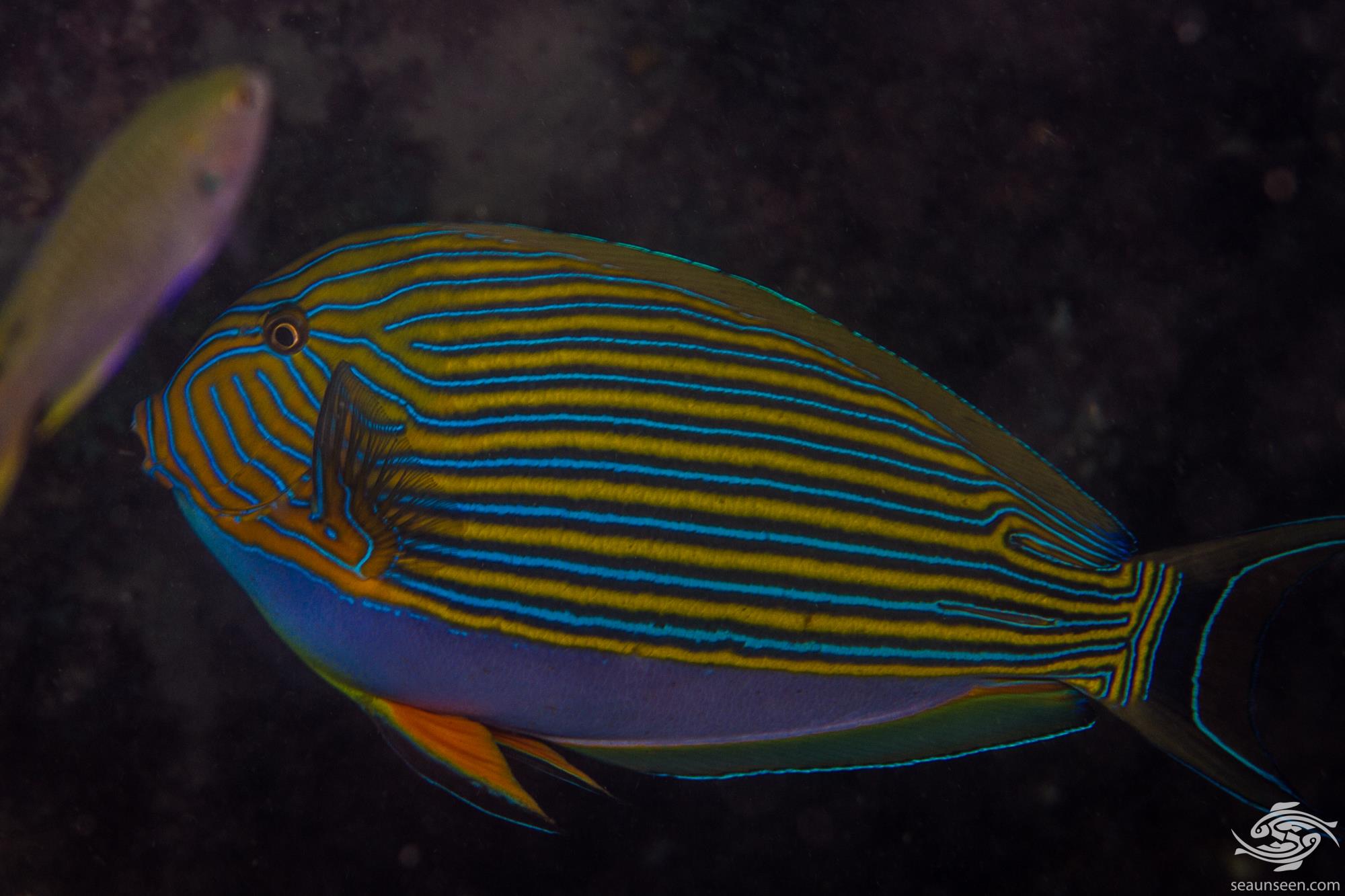 Lined Surgeonfish are not commonly caught by fishermen in Tanzania due to their feeding habits and the improbability of taking bait. They are netted or trapped occasionally.  In parts of the Pacific they are heavily exploited both for the aquarium trade and as a food source.