Lionfish are unquestionably one of the most photogenic fish in the sea, with an eccentric, gaudy profile, elaborate, vibrant stripes and a cantankerous, unhurried demeanor; they glide along reefs like an underwater kite.

Lionfish are beautiful, they’re dangerous, and they know it. Many encounters involve them approaching my camera with their spiny, dorsal fins fully outstretched, ready to show who’s boss. They’re curious and often wonder around me in a stalking manner, slowly undulating the soft rays of their fins as I deftly capture them within the frames.

I try to earn a winsome smile but am greeted instead by bony cheeks with a devilish grin and a furrowed brow. Warily, I allow the spiked fish to get closer, and notice the fleshy tentacles above the eyes and below the mouth, the intricately dotted tail fins and subtle tie-die-like splashes of color on the pectoral fins, and seduce my chance to capture every detail – all while attempting to steer clear of the fan-like venomous spines that come within inches.

He gazes at me fondly, with button-like eyes that the camera claims, then eventually retreats to a crevice among the rocks and coral, fed-up with all the fuss. The moment is gone but the experience remains, frozen in frames. 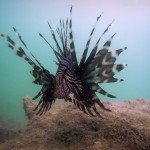 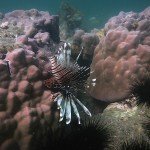 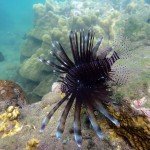 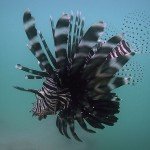 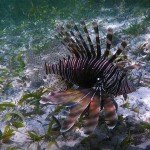 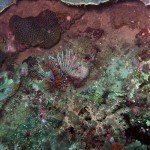 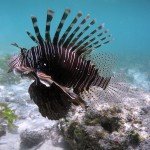