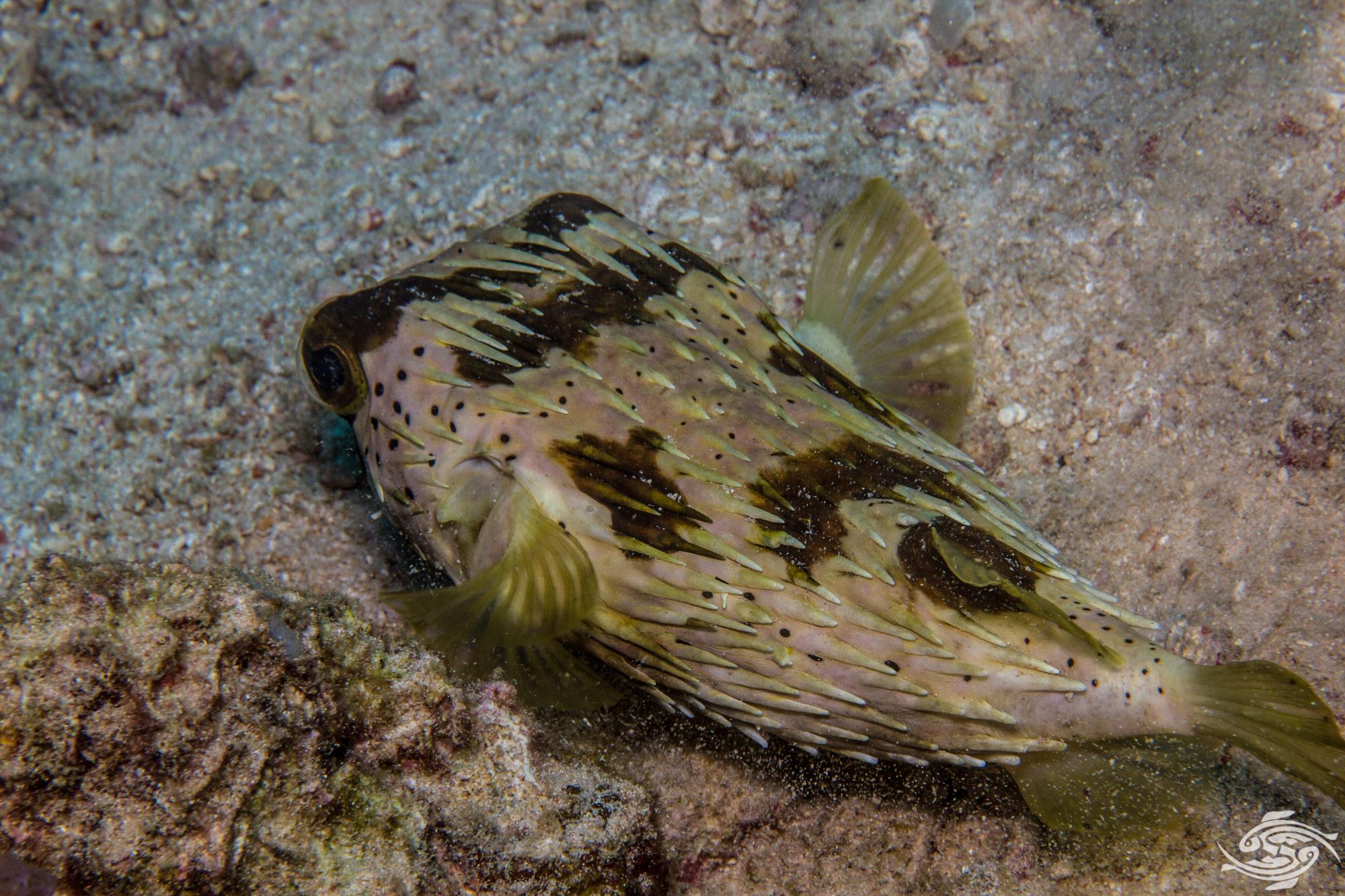 The Long spined porcupinefish Diodon holocanthus, is also known as the Spiny Ballonfish. They can be easily confused with the Short spine porcupinefish, (Diodon liturosus) which is similar in looks but has much shorter spines and slightly different markings on the face. As with all pufferfish or blowfish, they have the ability to swallow water or air and inflate themselves. This enlarges them making it more difficult for predators to swallow them and furthermore raises the spines presenting an unpalatable looking meal.

As further protection they have a symbiotic relationship with types of bacteria such as Pseudoalteromonas tetraodonis, which produces tetradotoxin  which is a powerful neurotoxin. These poisons are present in their skin and some organs. 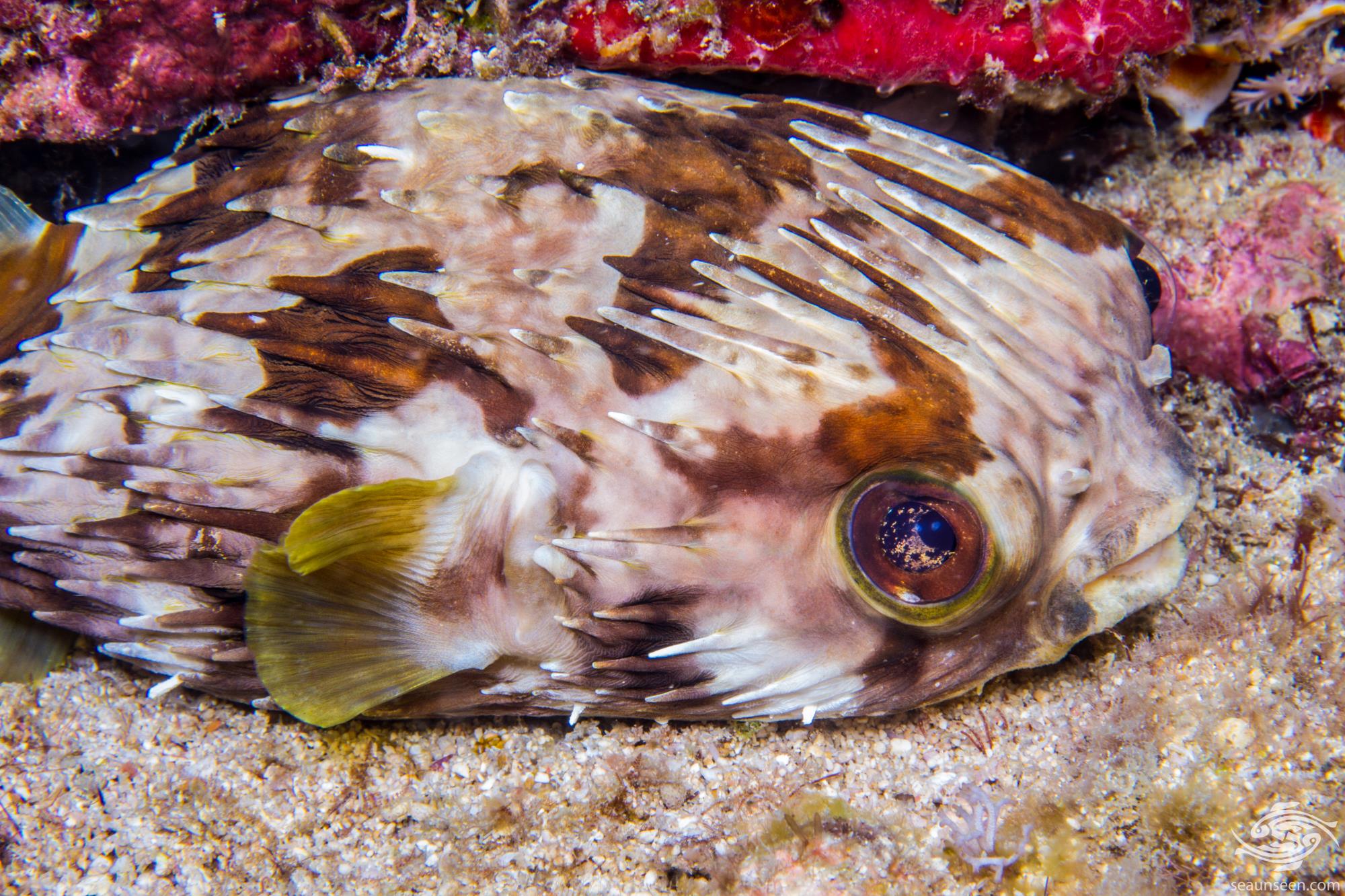 They can grow up to 29 cm in length. The mouth is proportionally fairly large and if one observes them closely, the skin around the mouth is slightly wrinkled. 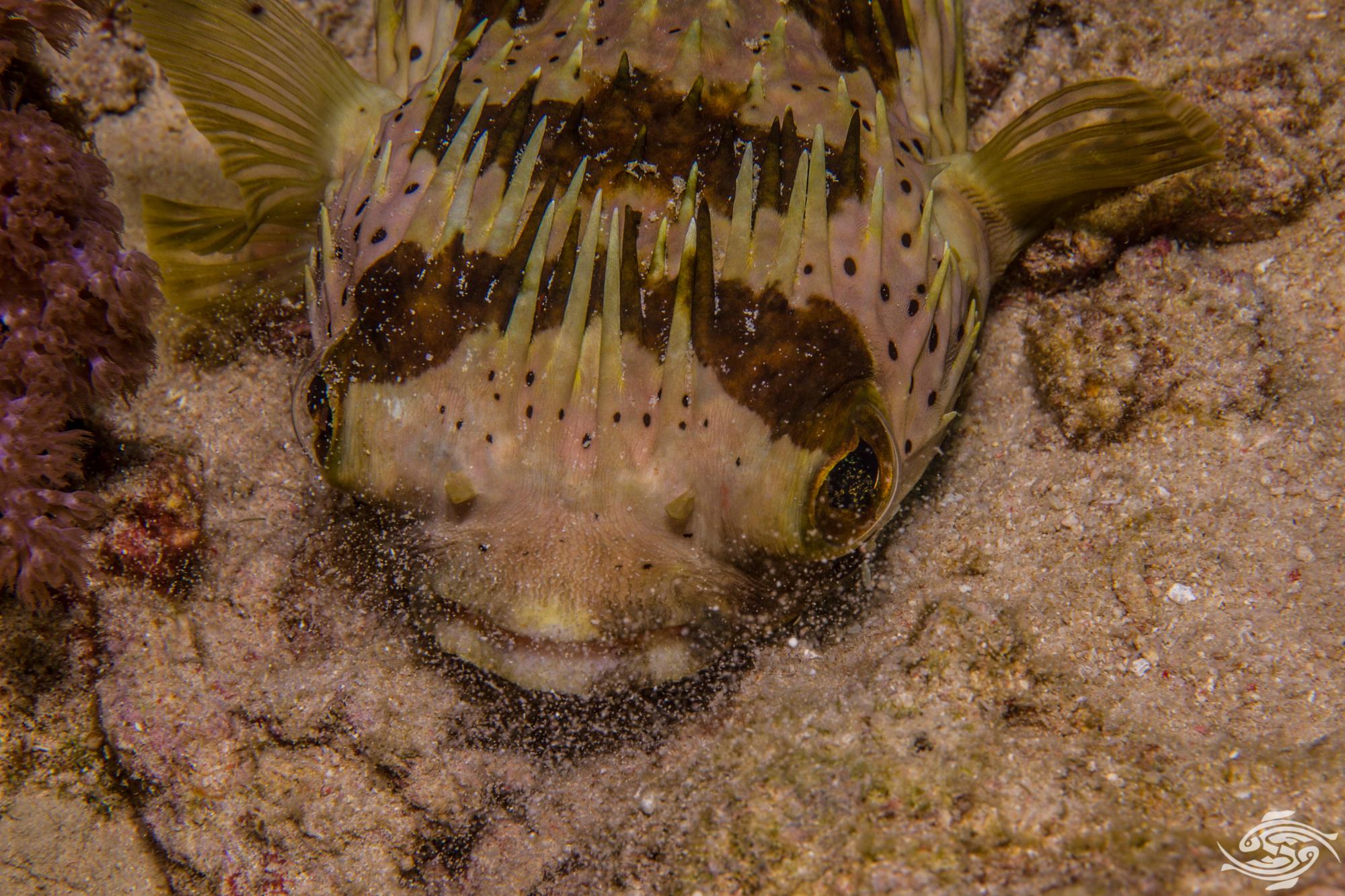 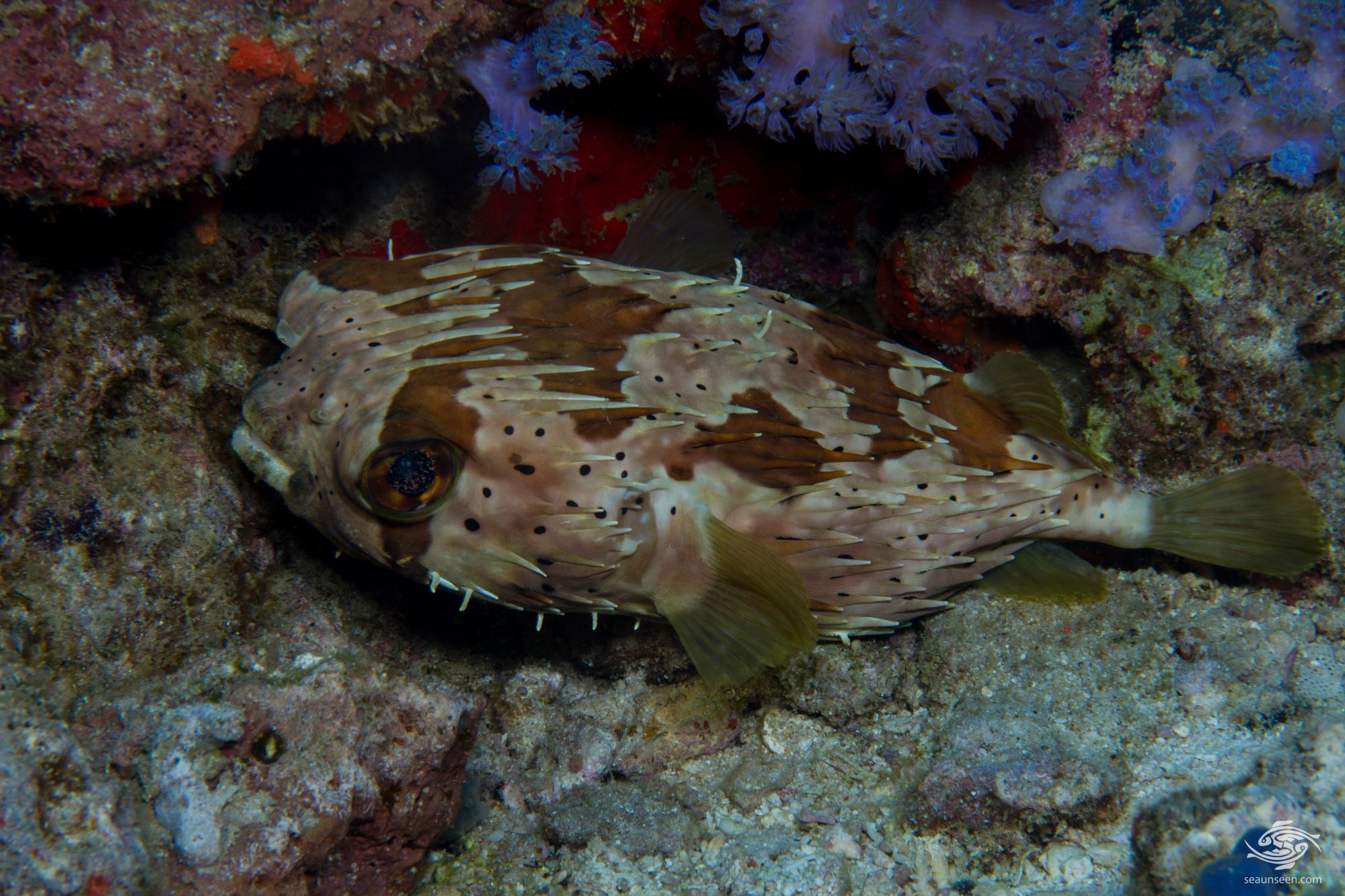 Long spined porcupinefish are found in most sub tropical and tropical seas. 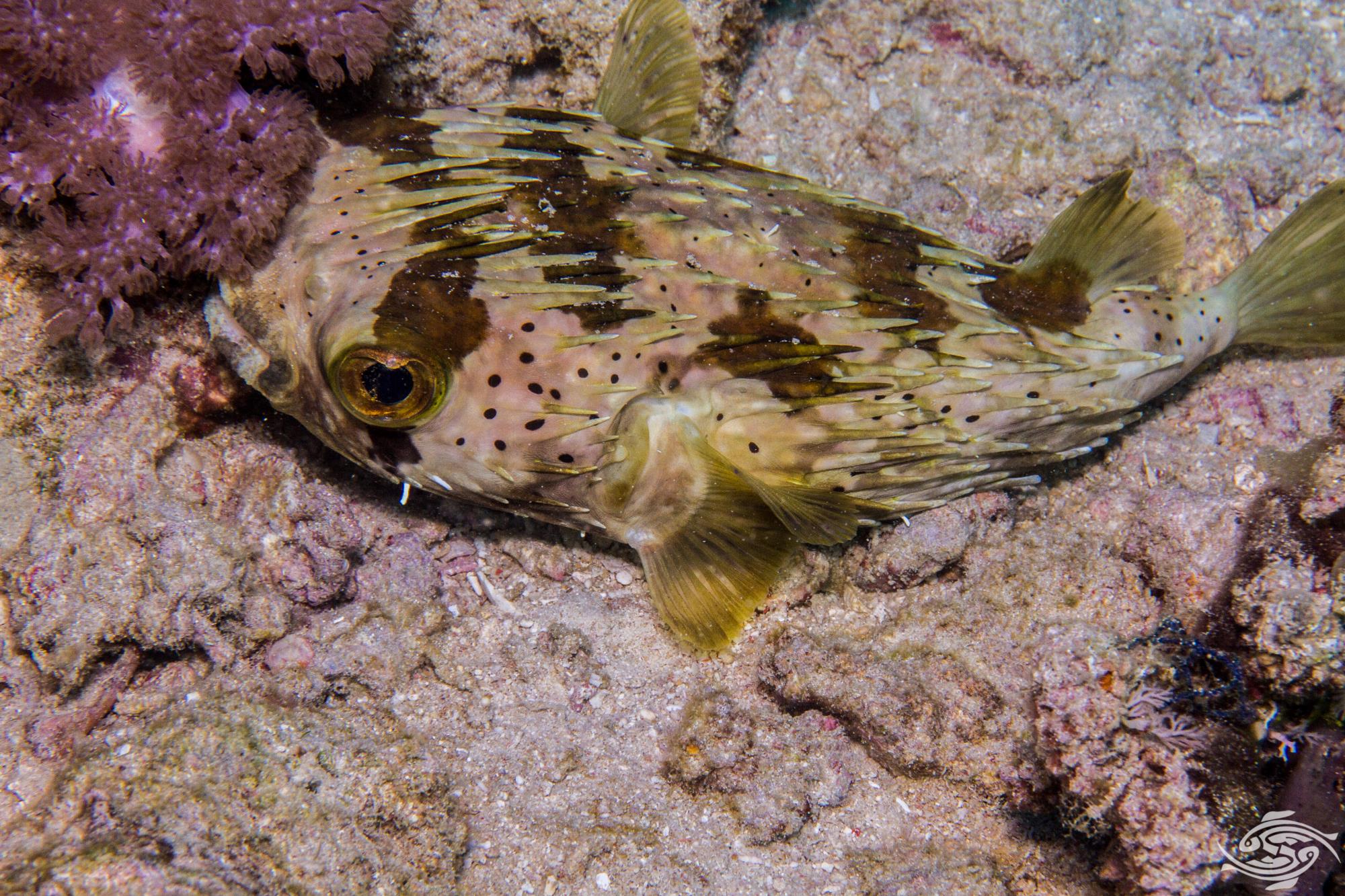 The Long spine porcupinefish are nocturnal feeders , feeding mainly on crustaceans, gastropods and sea urchins. Hermit crabs are included in their diet. Diving at night, one often sees them blowing water into the sand to expose small organisms which they quickly gobble up. From watching them feed they seem to have some sense that allows them to pick out areas of sand which contain foods. 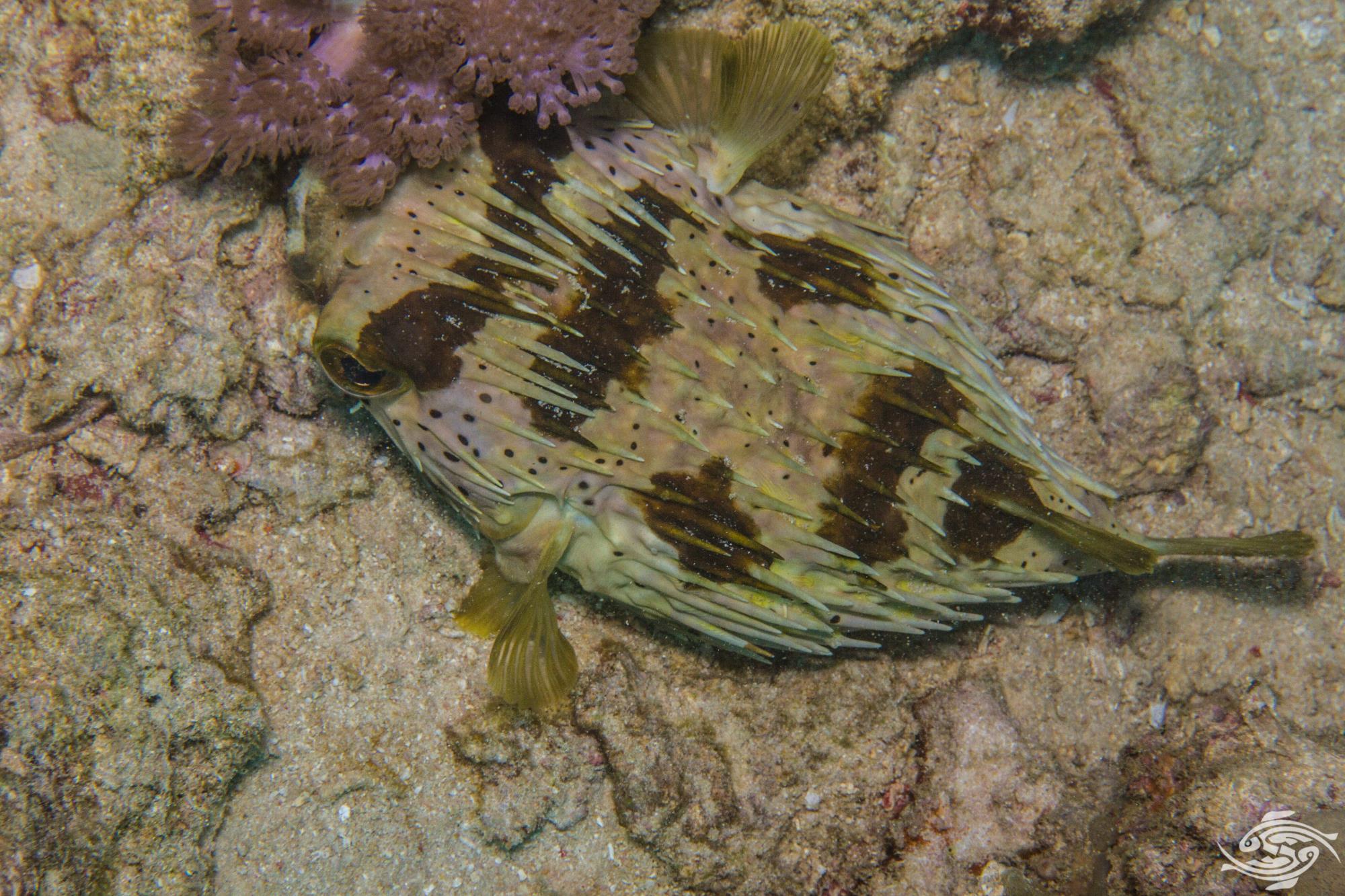 Long spine porcupine fish are prolific spawners, the male pushes the female to the surface and large numbers of eggs are released and fertilized. After several days of floating near the surface the eggs hatch and the larvae are well formed. After three or so weeks the fins and teeth develop and the juveniles migrate to inshore areas when they have reached six to seven cm in length. 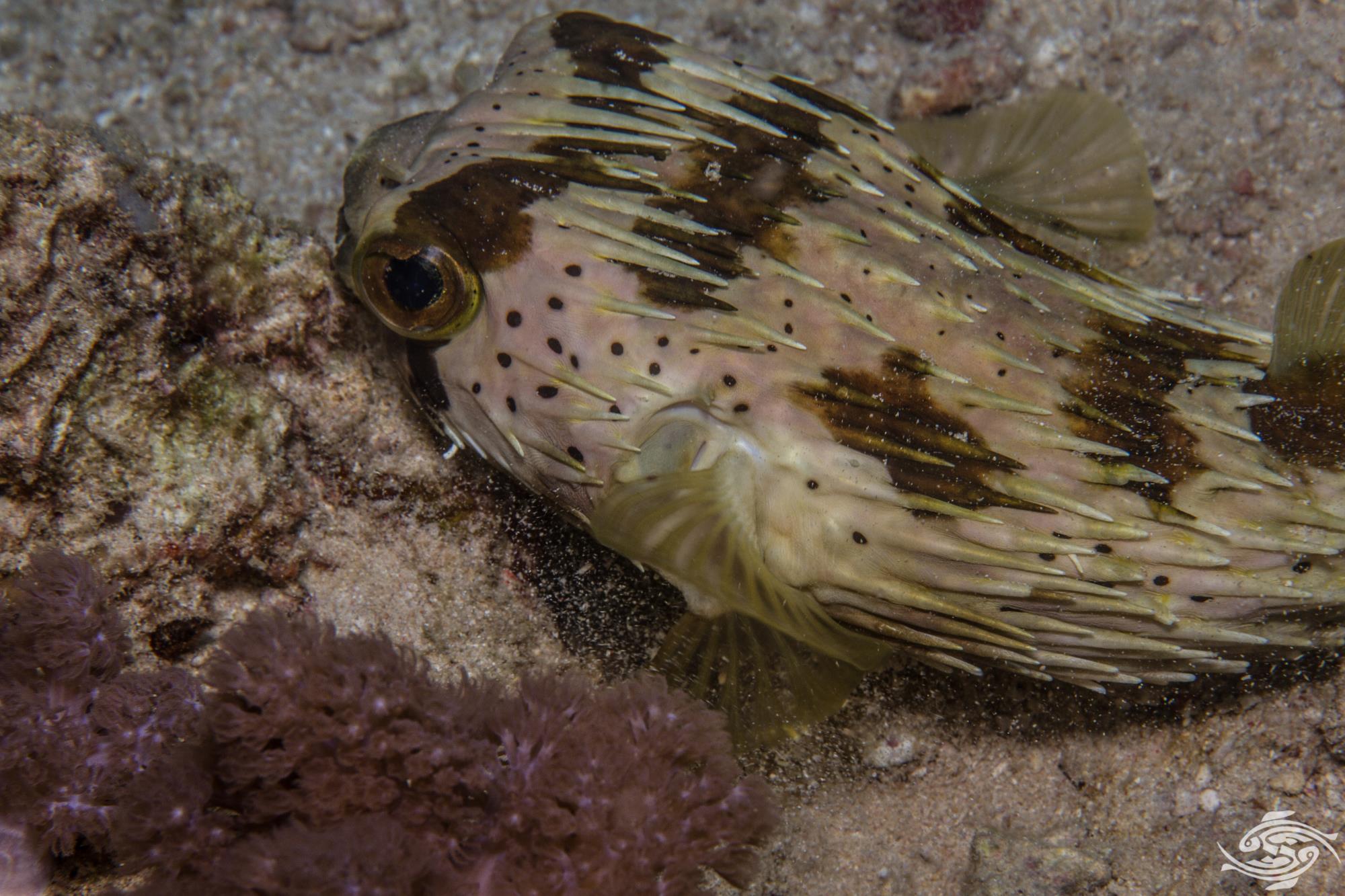 They are eaten in Japan as sashimi and chirinabe in the notorious dish known as Fugu. The tetradotoxin found in the fish is around 1200 times more poisonous than cyanide and the attraction is to put ones life in the hands of the chef who cuts the meat, hopefully leaving out the more poisonous parts which would certainly kill. If the chef gets it right a mild tingling and a feeling of euphoria will be felt.

In some areas the fish are blown up and sold as ornaments or as lamp shades. Due to the increased controls on transporting such goods this practice is hopefully dying out. 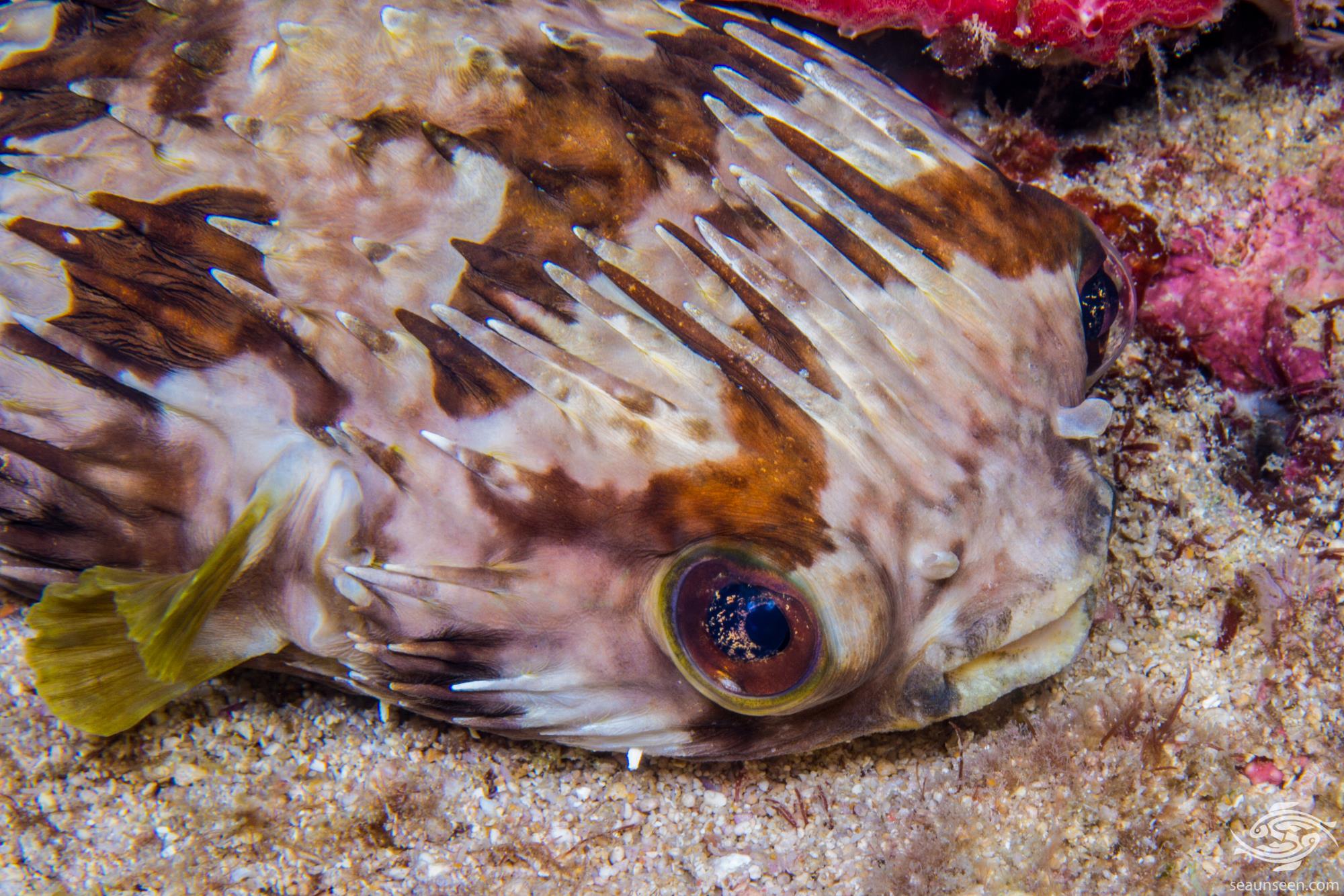 The longspined porcupinefish grow quite large and are messy eaters and therefore require a large aquarium. Even with good filtration frequent water changes are necessary and any excess food should be vacuumed out. As saltwater fish go they are very hardy and easy to feed. Because they are easy to catch they are also quite cheap. They have been kept in captivity for up to 15 years. As fish go they are intelligent and soon learn who feeds them and will swim up and down the side of the aquarium when they spot their feeder.

While they do not eat other fishes in the wild, any crustacean and some corals are fair game for them. Because their teeth continue growing throughout their life, they require hard foods to keep their teeth worn down. Because of their solitary nature only one fish may be kept in a tank. If you have one you should not stress them to watch them puff up. 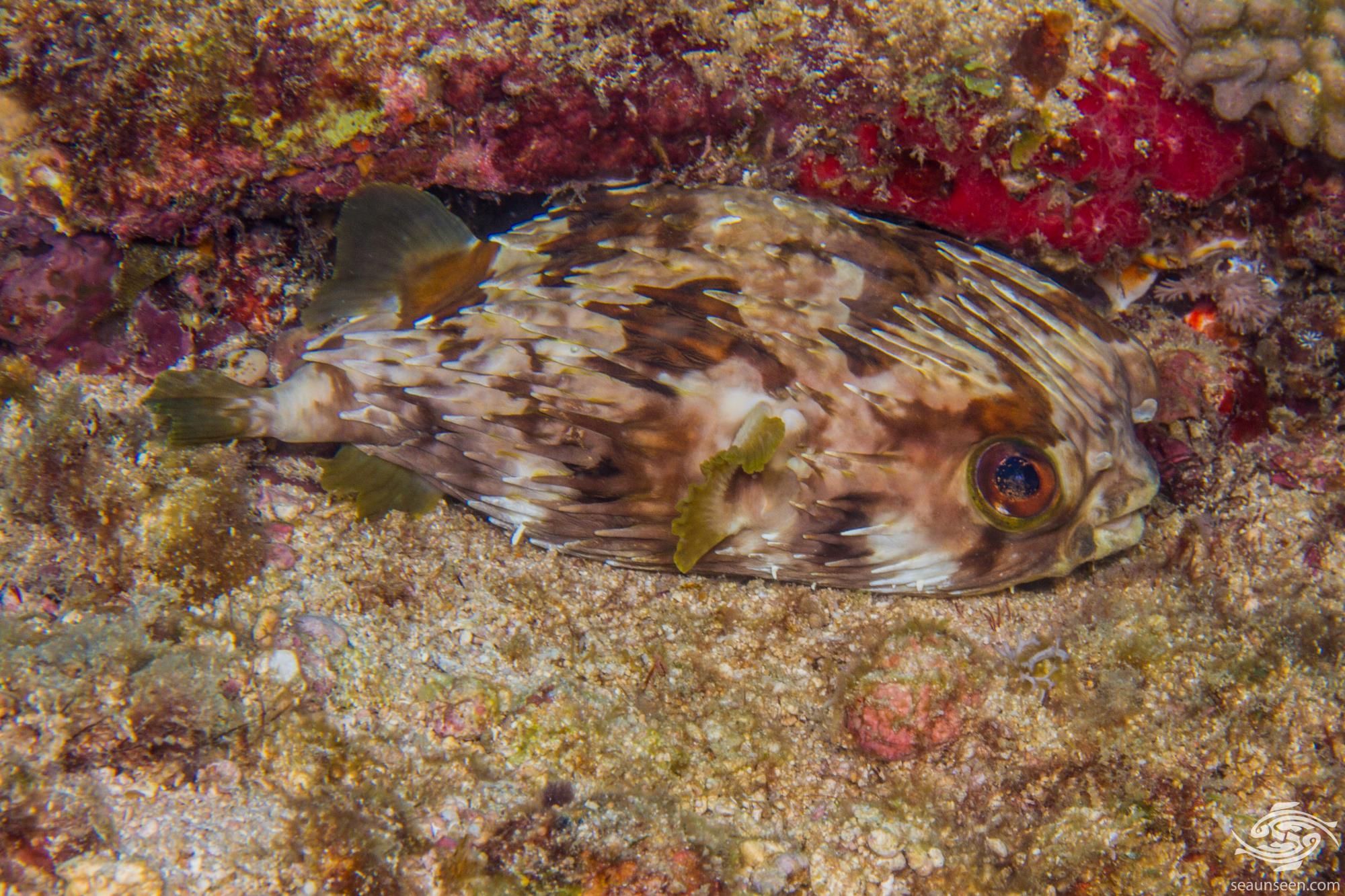 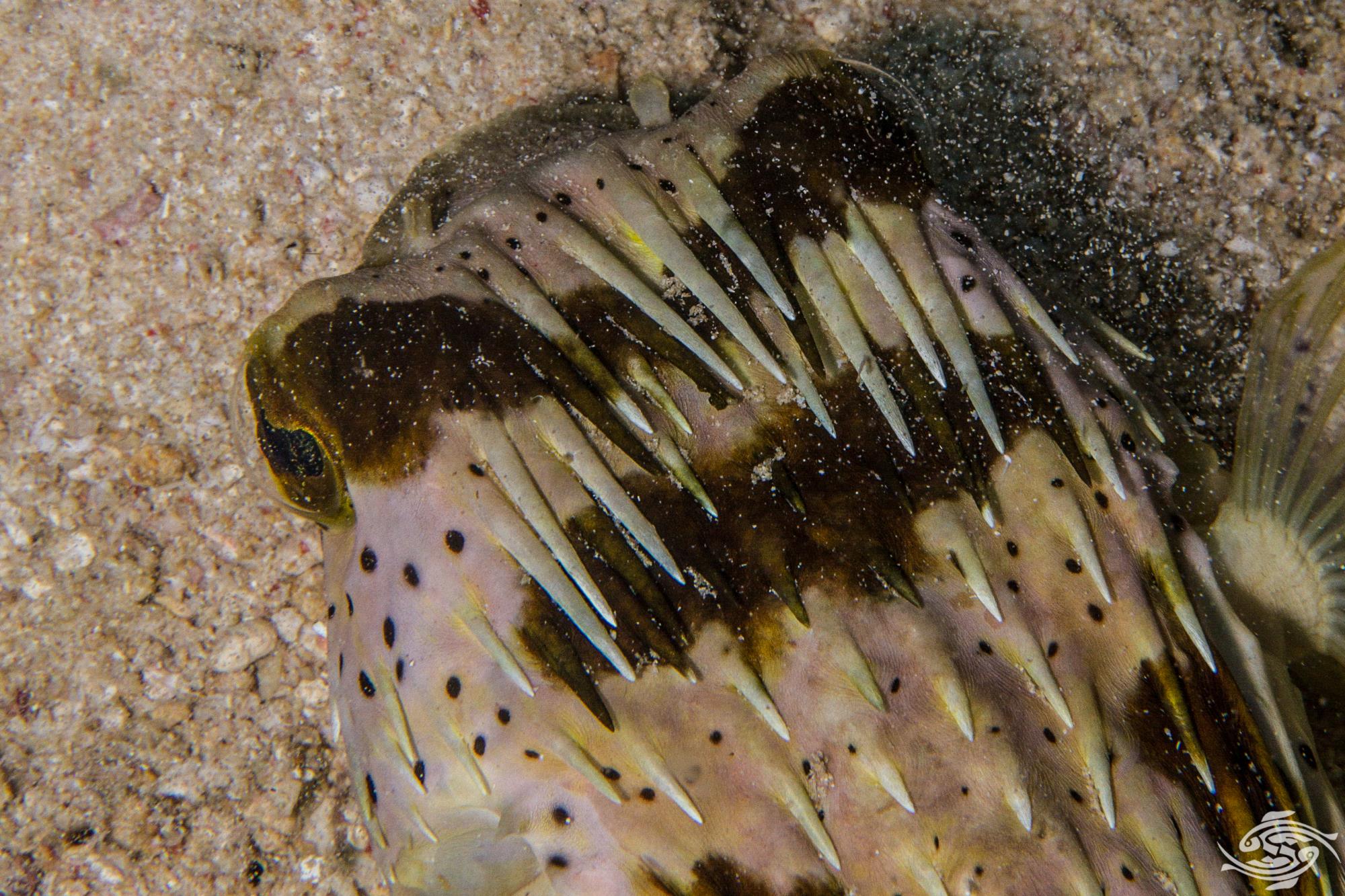 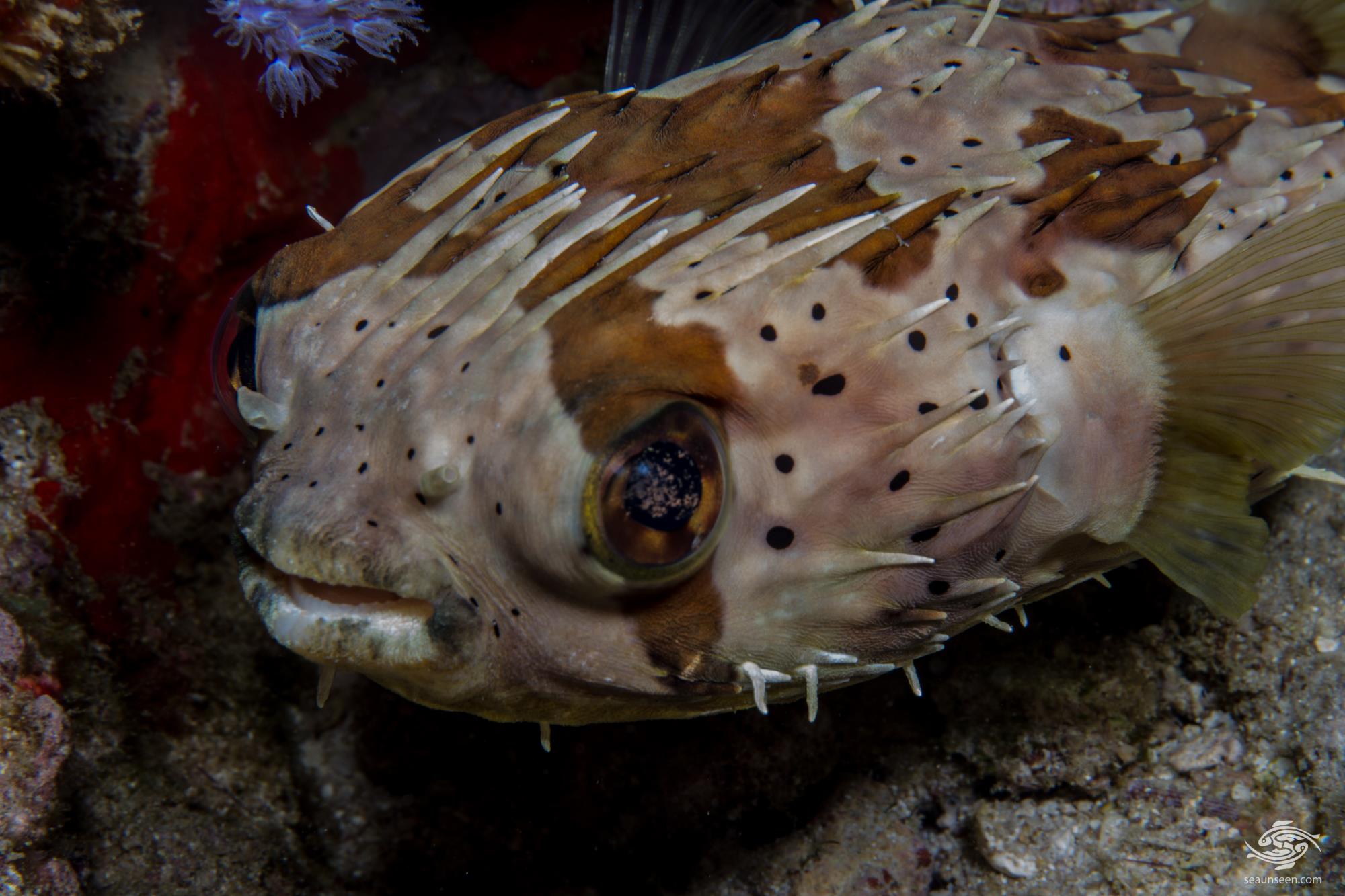