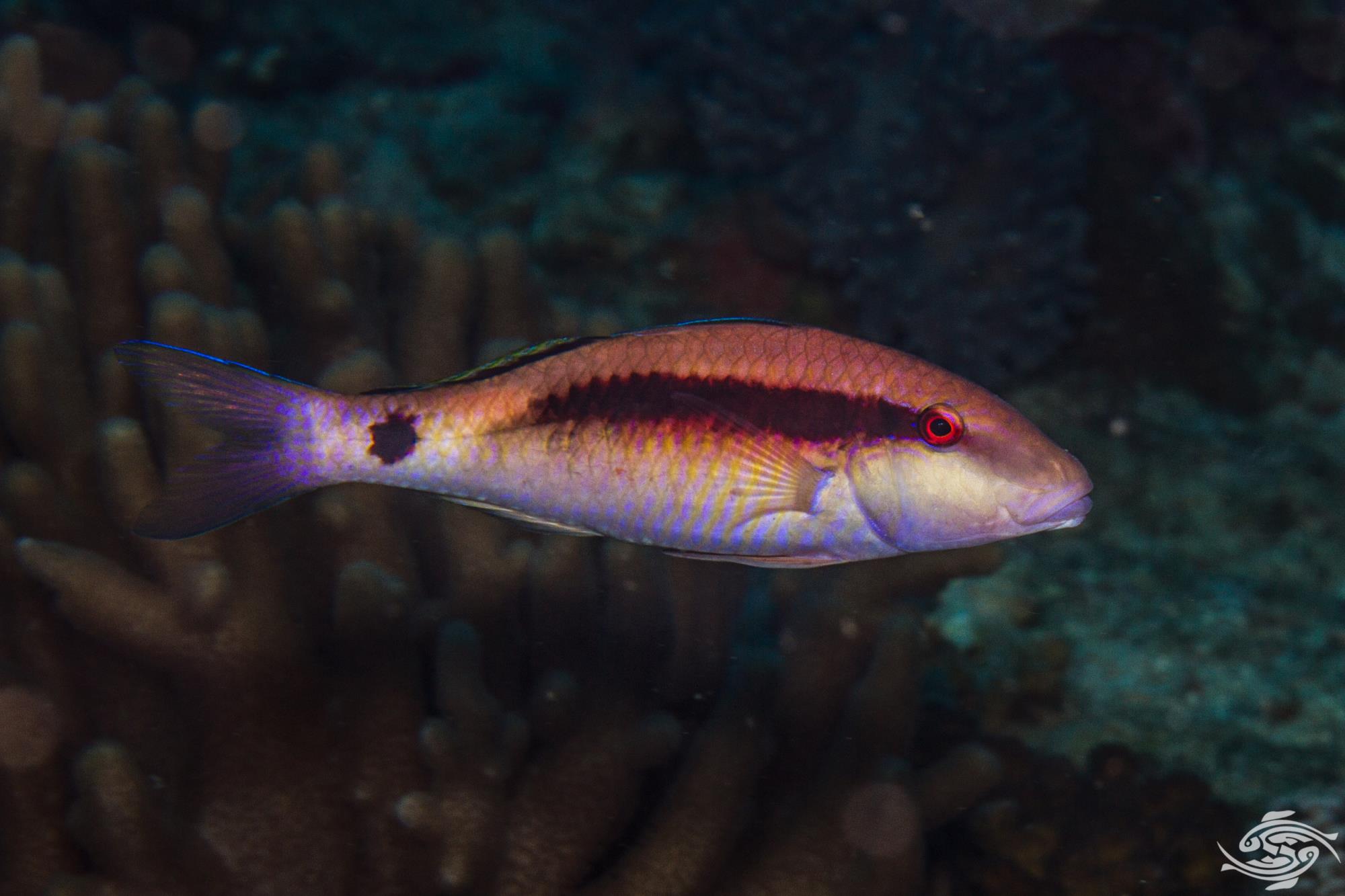 The Longbarbel Goatfish (Parupeneus macronemus) is also known as the  Band-dot goatfish, and Long-barbeled goatfish. They are certainly the most common goatfish in coastal Tanzanian waters. Goatfish all have a pair of retractable barbels or feelers that have chemo sensory organs in them to detect prey. They all have proportionally long bodies with a deeply forked tail. 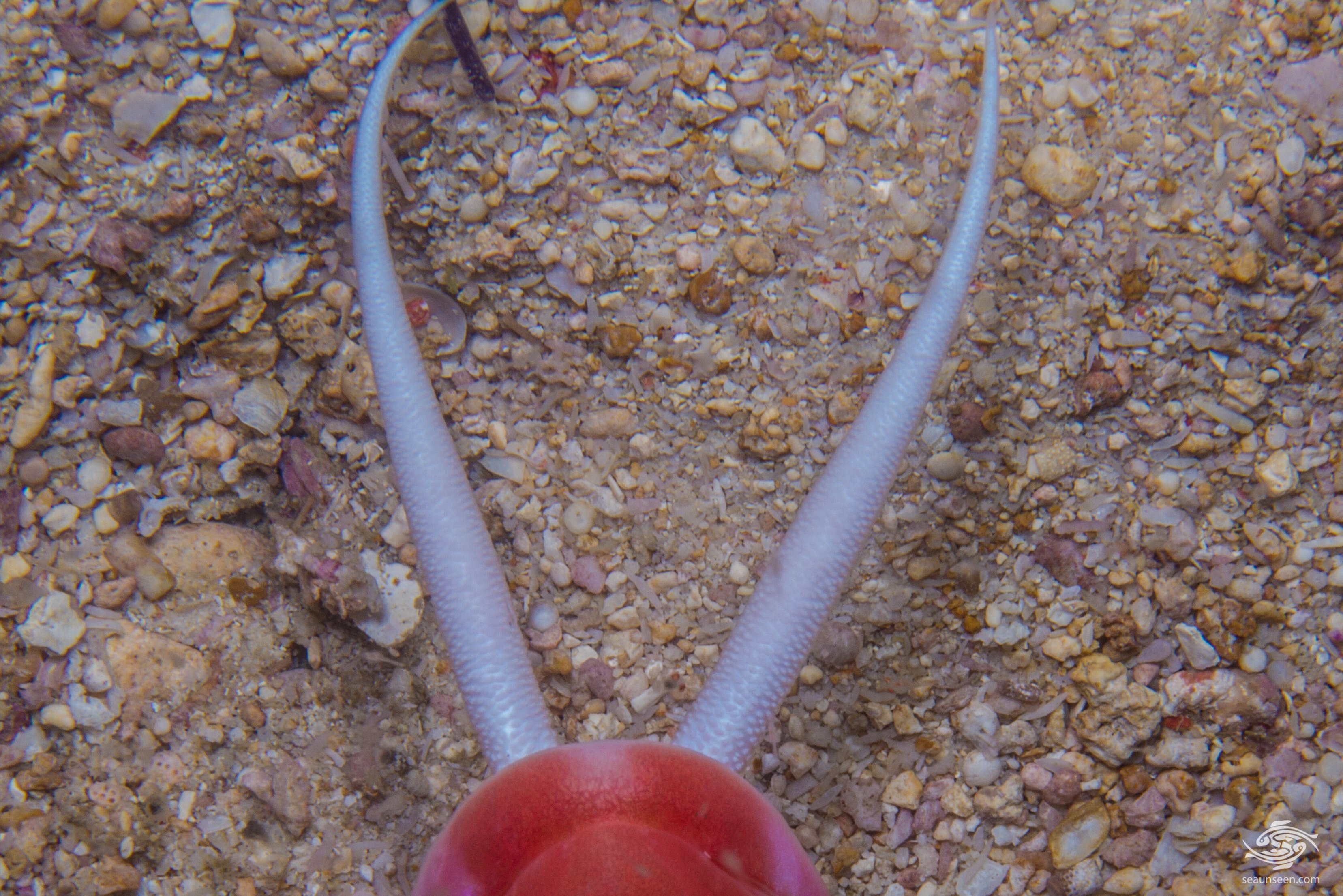 The barbels seen above are rough textured for greater surface area and are prehensile, being used to sift through the sand and in holes to detect prey. When not in use they are often folded back under the fish. 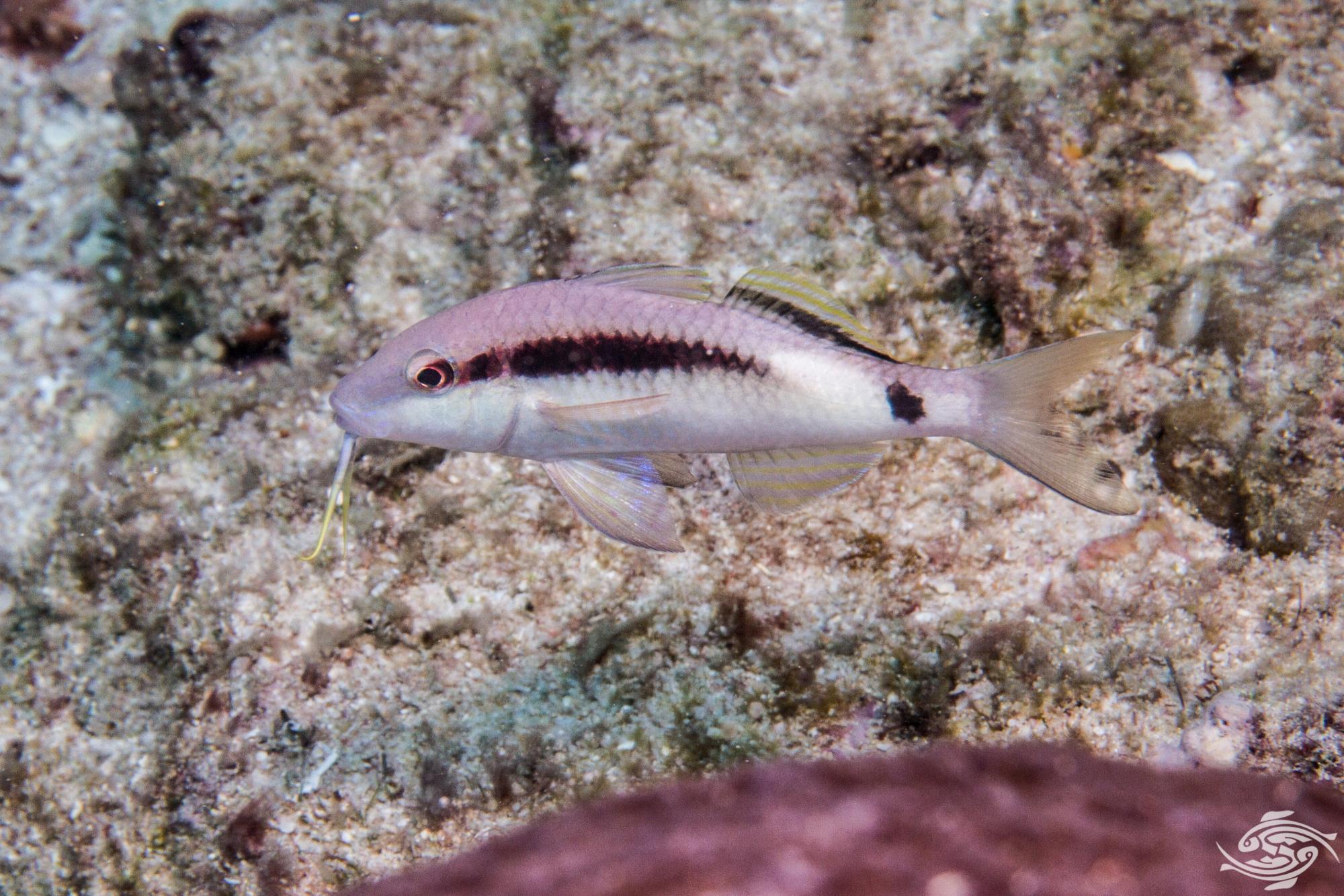 The Longbarbel Goatfish is a color change artist, the base colour as seen in the image immediately above is a light white belly with a thick straight band across the body. In the caudal area there is a dot surrounded by white.  There is a distinctive black line on the lower rear dorsal fin.

However it is at night that they really go to town on the color change. When at rest on the reef they are a pinky color with yellow, blue and pink stripes. This can be seen in the image immediately below. It is hard to believe that it is the same fish.  They grow up to 35 cm in length. 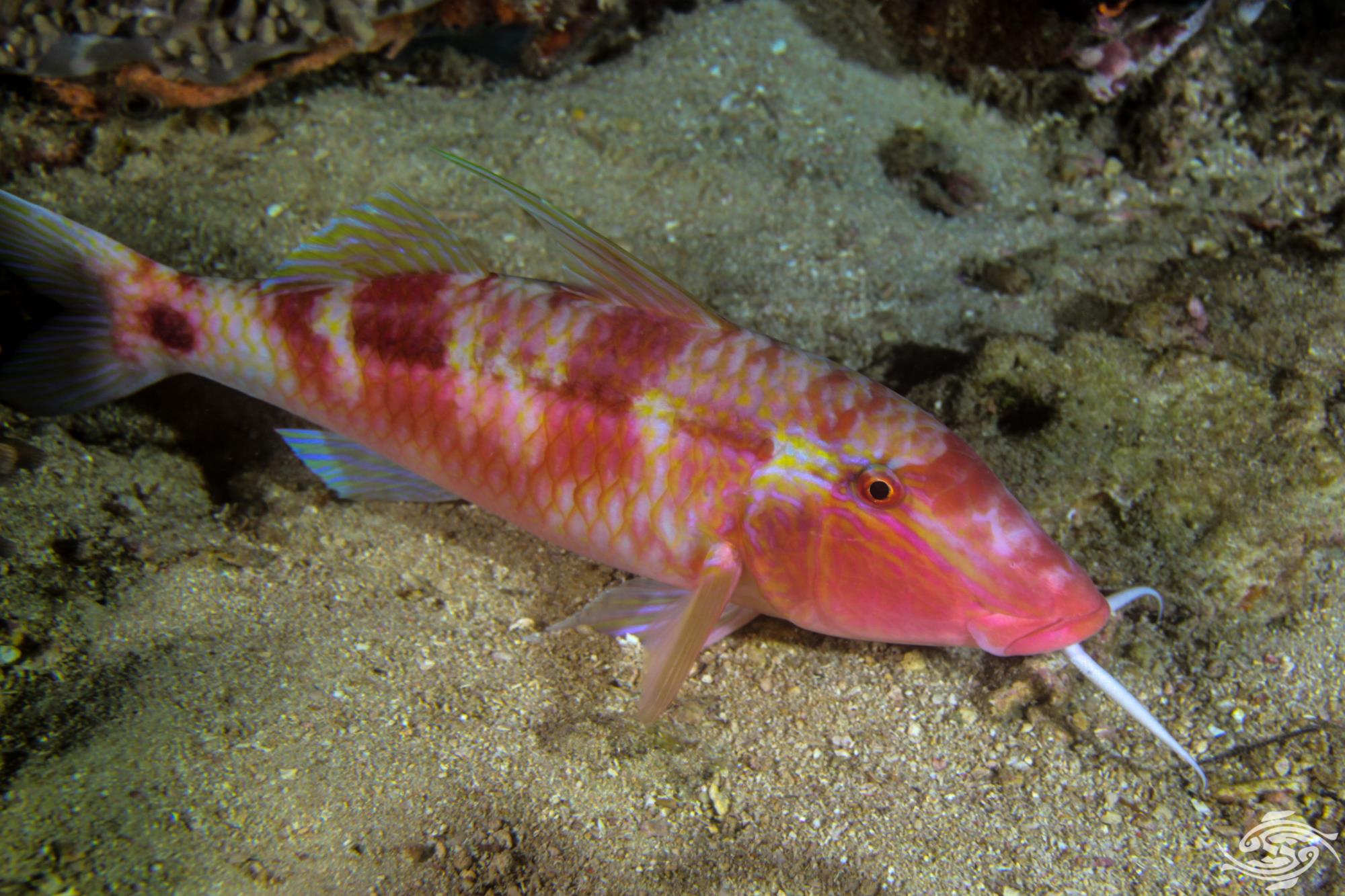 Perhaps the best time to see their full colours is when they are being cleaned at a cleaning station as pictured below.  The barbels can be clearly seen as well as the joint that they fold back on. The colours on this fish were extremely intense while it was being cleaned. 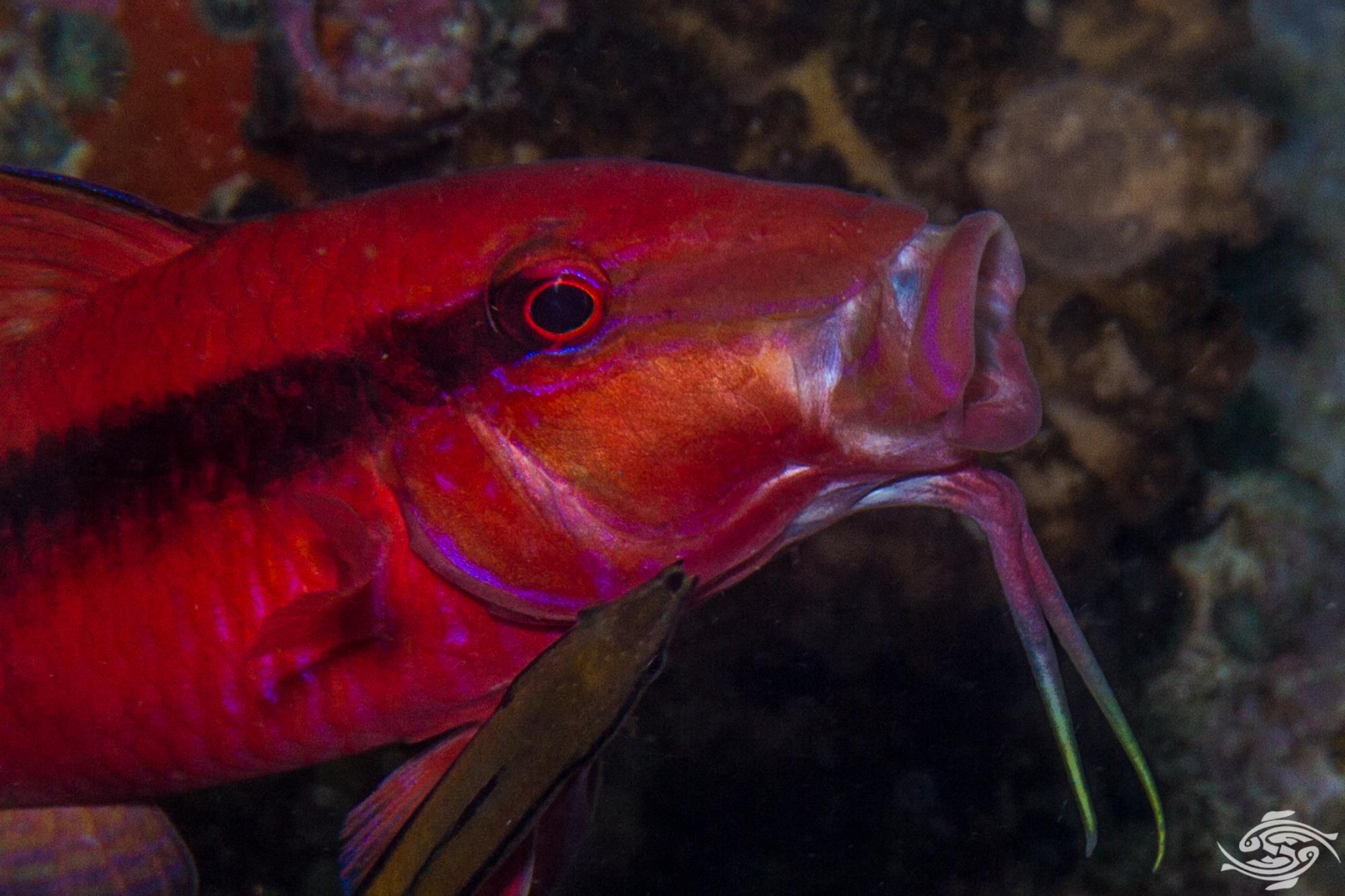 LONGBARBEL GOATFISH IN THE WILD

The Longbarbel Goatfish is  common from 12 to 20 meters on the reefs but sometimes they are seen a little shallower. They are usually in large loose groups that feed across the top of the reef. Often they are accompanied by Wrasses, juvenile Parrotfish, Kingfish as well as Goldsaddle goatfish who hope that they will flush out prey. These fish do not compete with them for food and may camouflage them to some extent. For the juvenile Parrotfish who are predominantly algae eaters, they provide safety in numbers.

They usually swim low in the water table close to the bottom. At night they can be seen resting on the reef and are almost always solitary at this time. 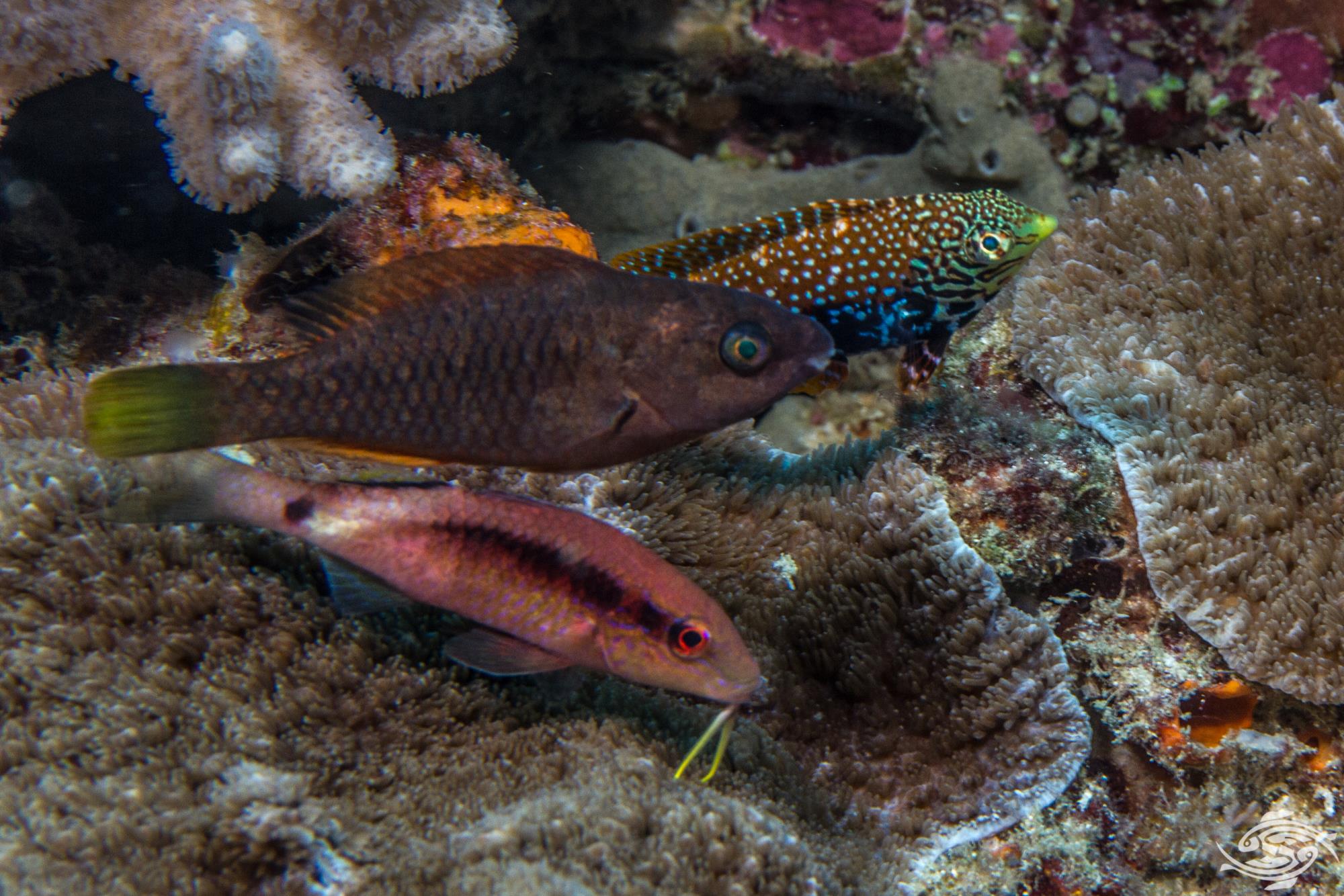 In early autumn the juveniles that have hatched in late summer form large groups. These groups move across the substrate together making collective darting movements across the bottom while feeding. 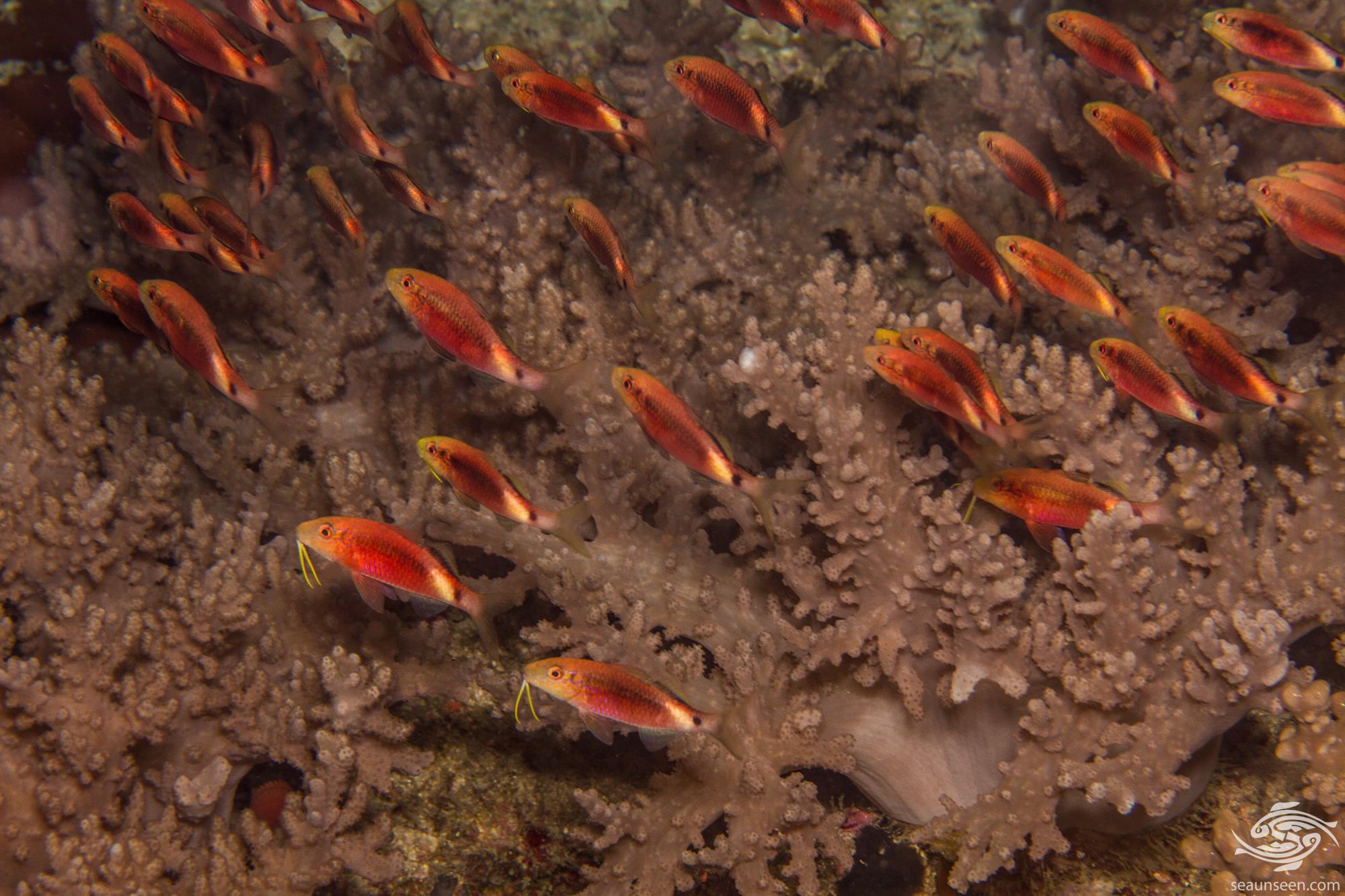 The Longbarbel Goatfish is found across the Indo western Pacific  Ocean. 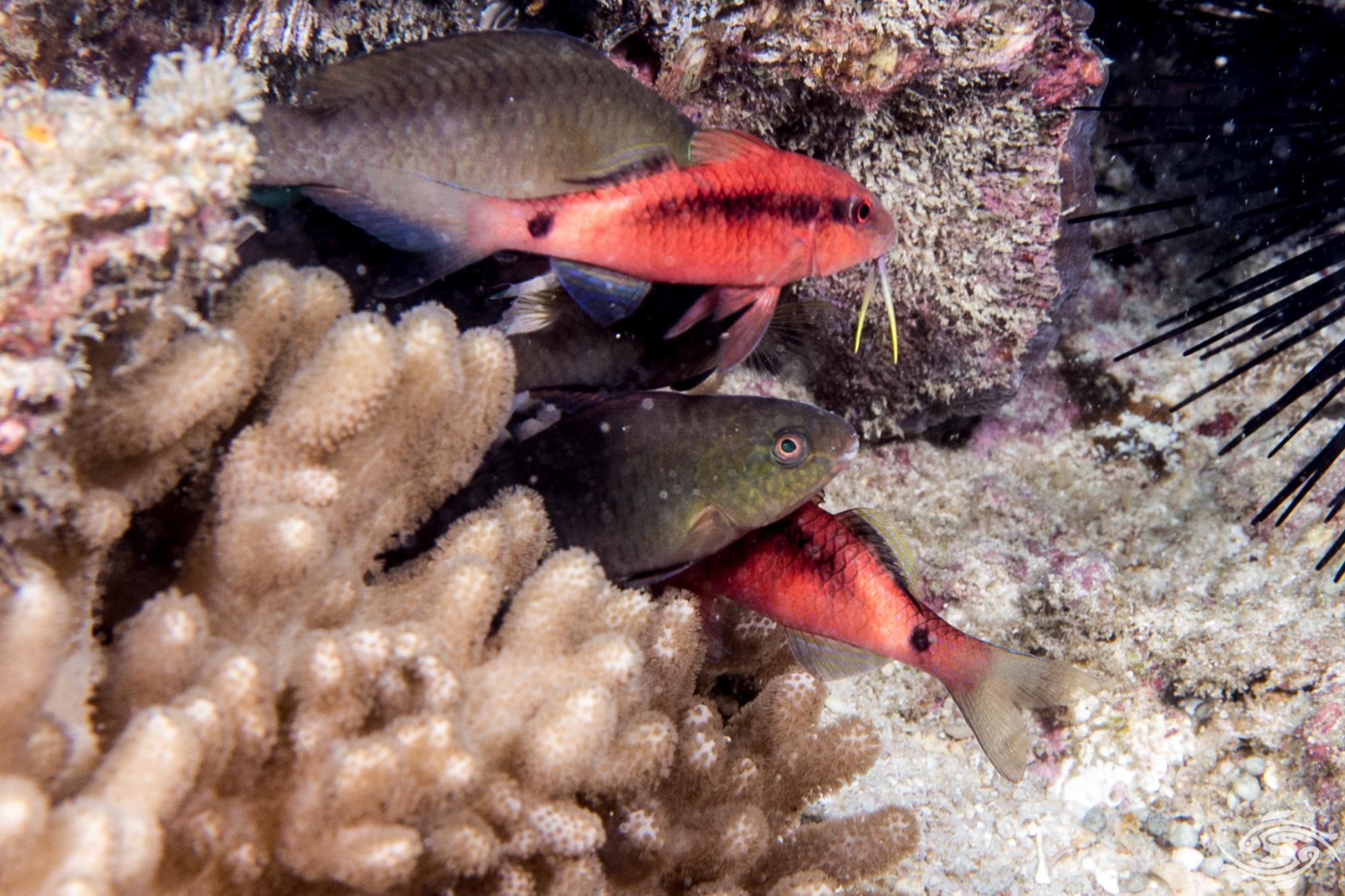 The Longbarbel Goatfish feed on crustaceans and worms which they flush from their hiding places with their long barbels. Once the begin searching an area the comb it quite meticulously with their barbels. The barbels are very prehensile and they have a large degree of control over them. Both seem to operate independently and if they allow one to get close while feeding, it is quite interesting to watch them. 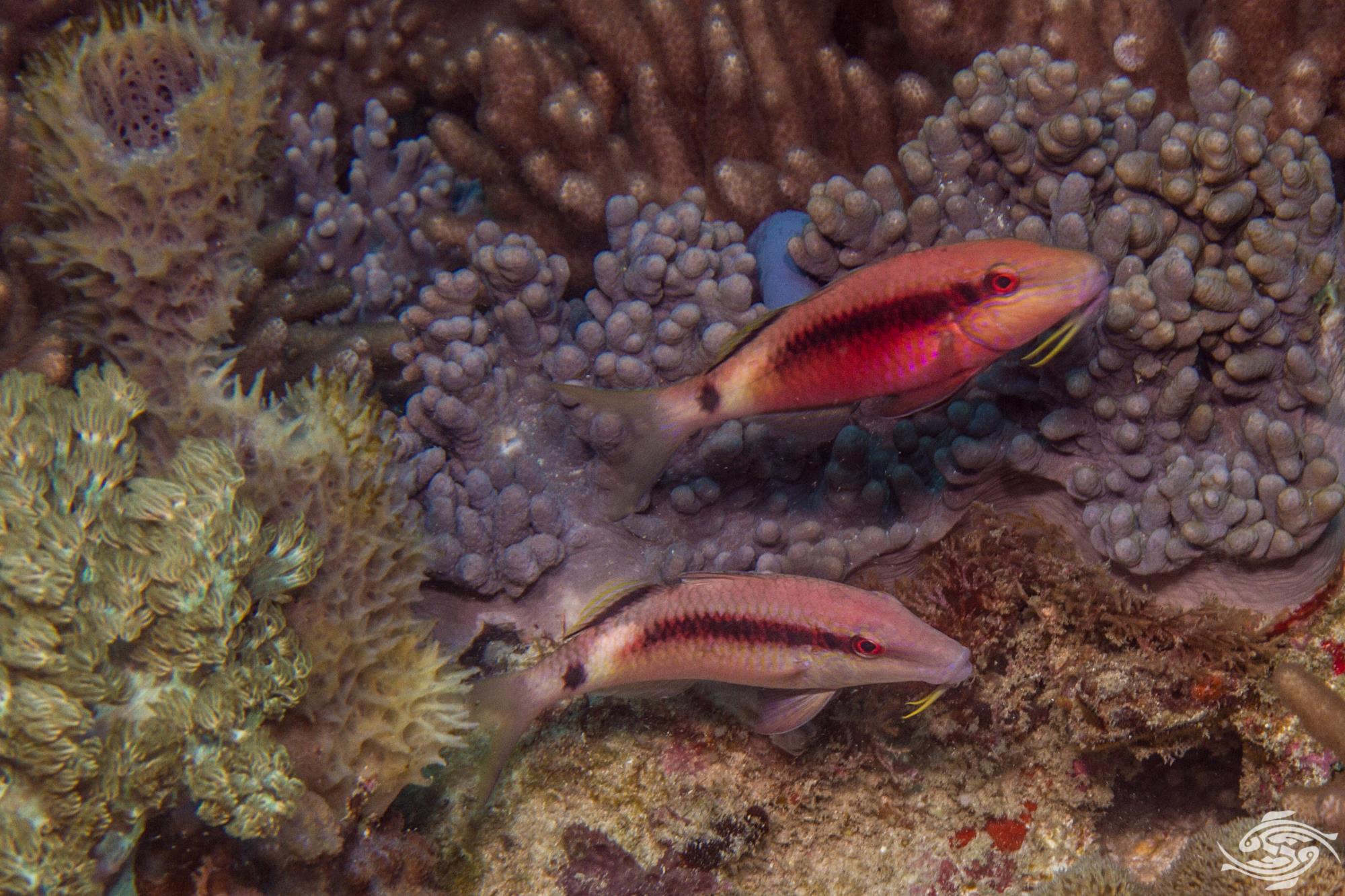 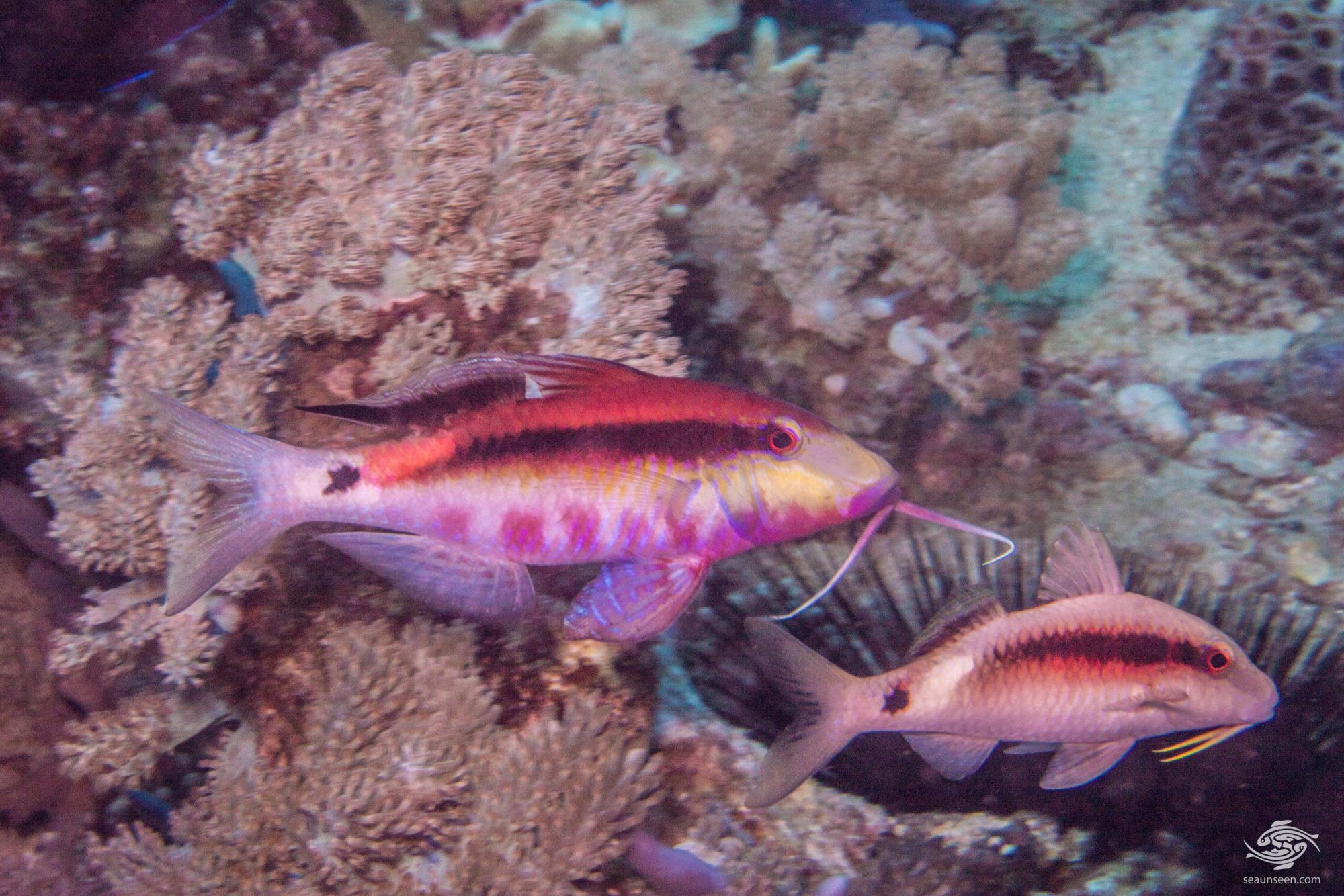 We have observed a male chasing after a female as pictured above displaying for the female . The pair were swimming in large circles presumably a precursor to mating. 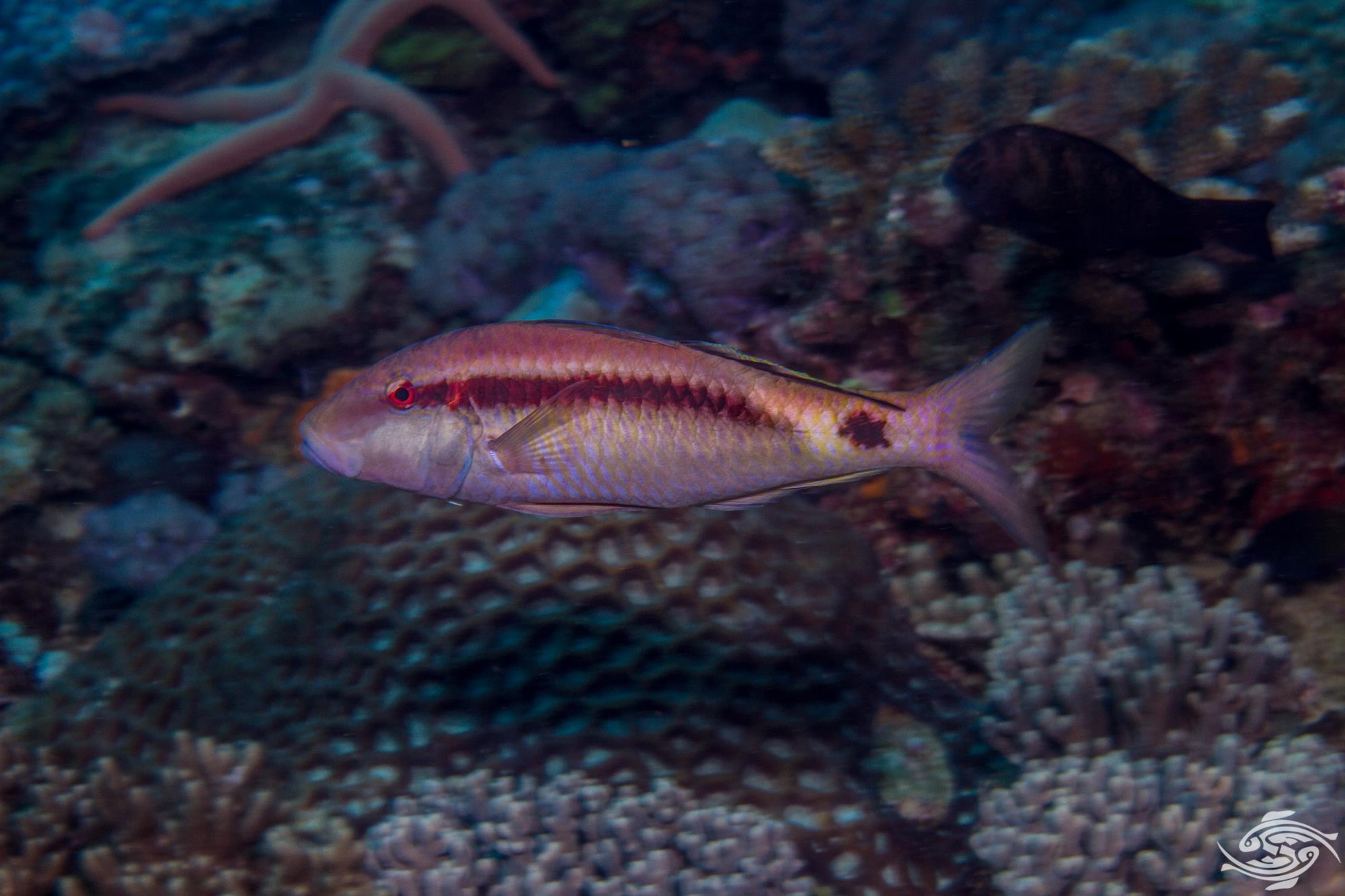 Longbarbel Goatfish are kept in aquariums but their potential size of 35 cm coupled with their diet of small crustaceans and worms means that they are not for everyone.  A large tank with large tank mates is therefore a prerequisite. Because of their tendency to root around they are not suitable for reef tanks and rocks should be well anchored. 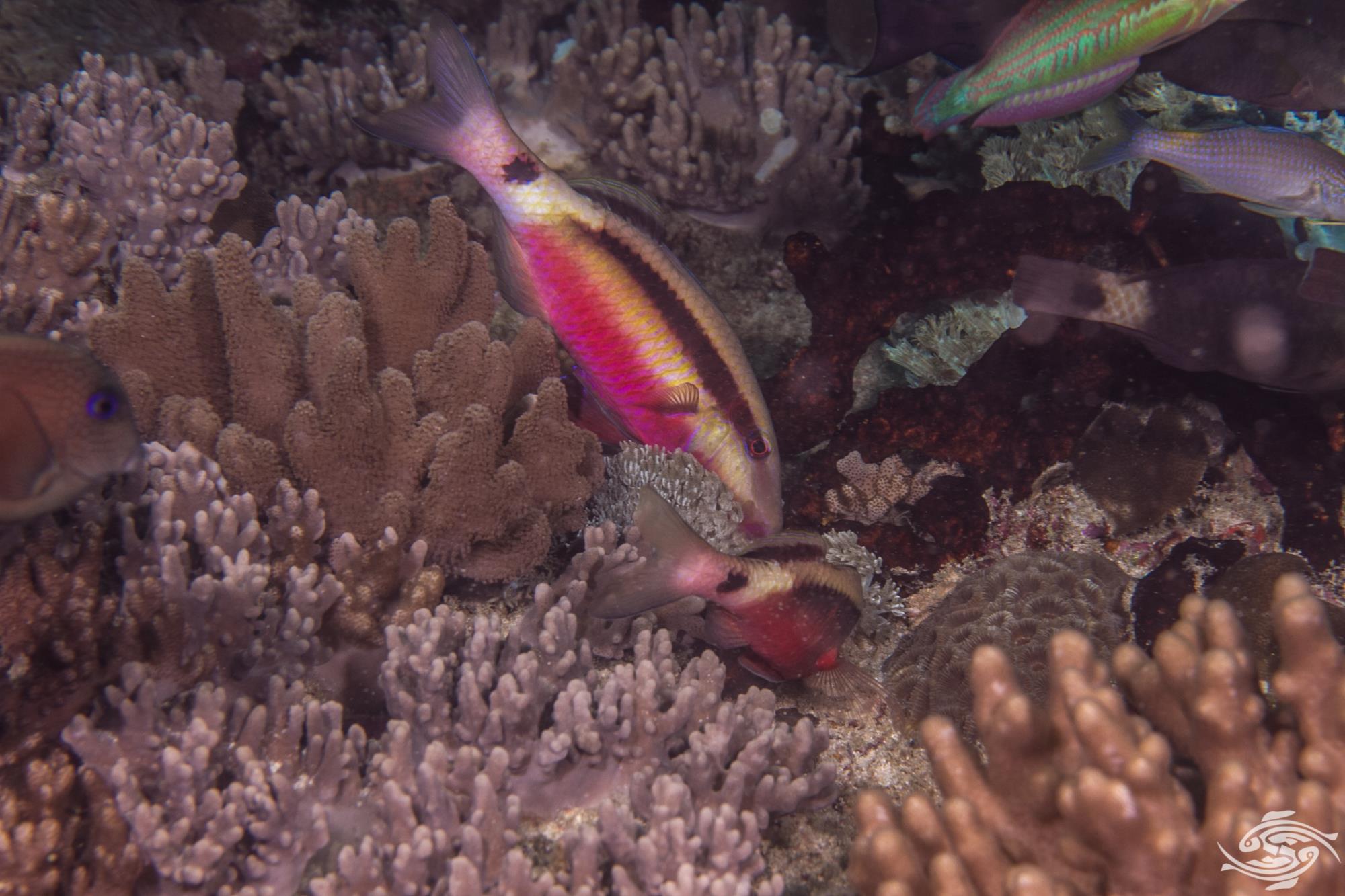 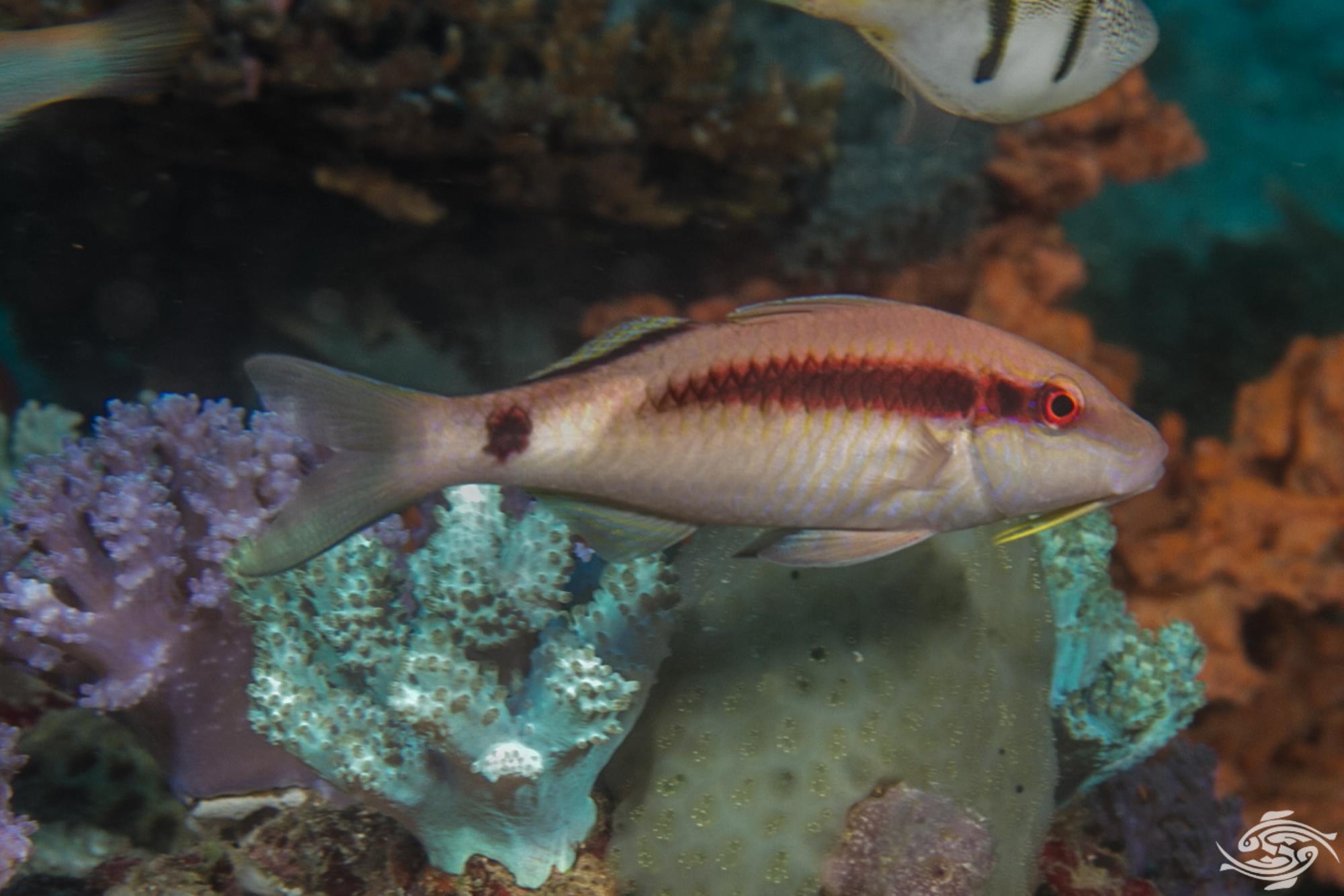