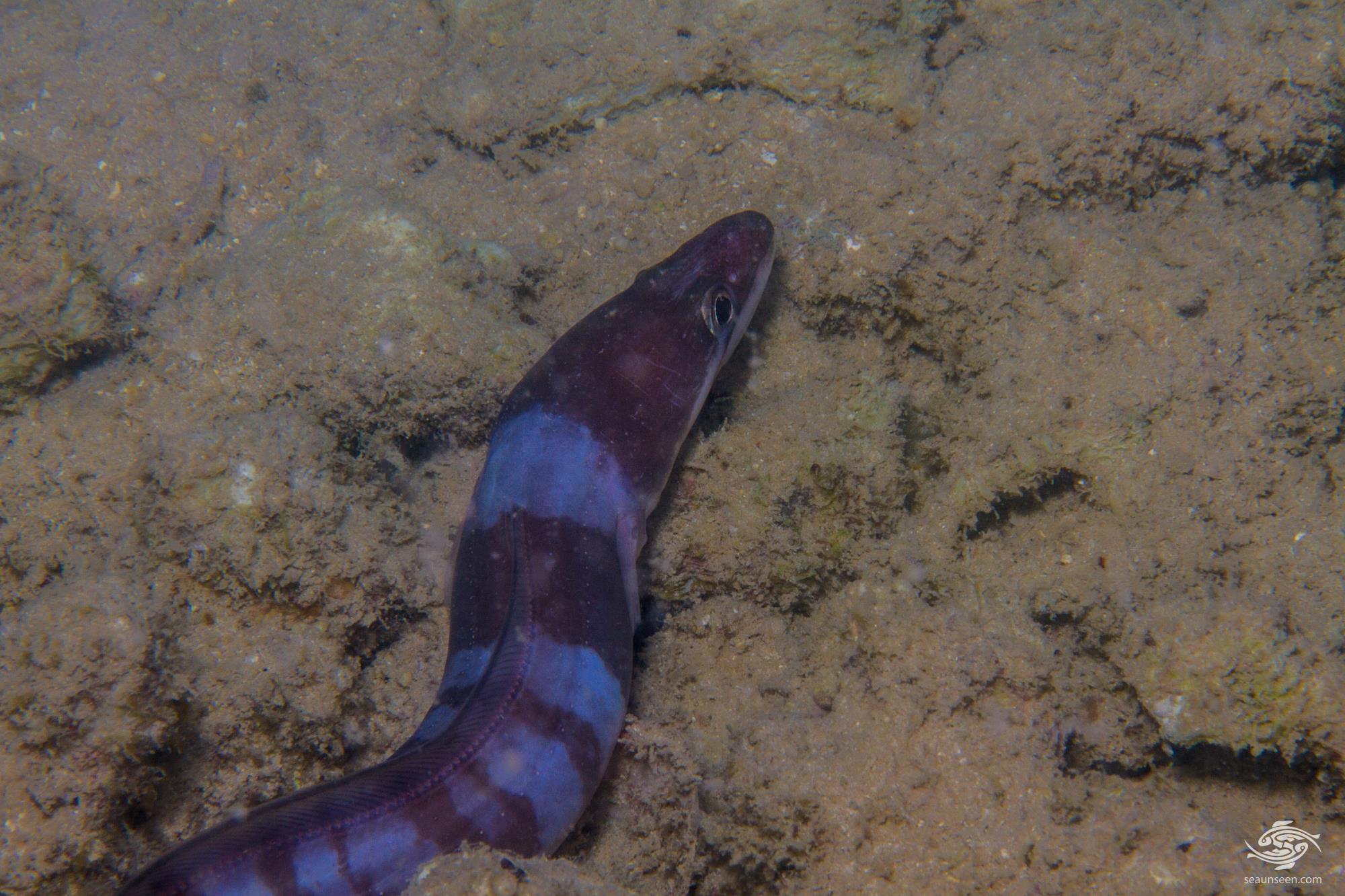 The Longfin African Conger Eel (Conger cinereus) is also known as the Moustache conger eel and the Blacklip Conger Eel. They are very reclusive eels and are not commonly seen during the day.

They grows up to 140 cm in length.  Its elongated body is a grey brown colour during the day. At night when out hunting they often assume blue grey bands on the body, presumably for camouflage purposes. The mouth is proportionally small compared to Moray Eels, with two rows of teeth in each jaw with the outer row being longer. On the upper lip below the eye there is a dark line which gives them one of their common names. 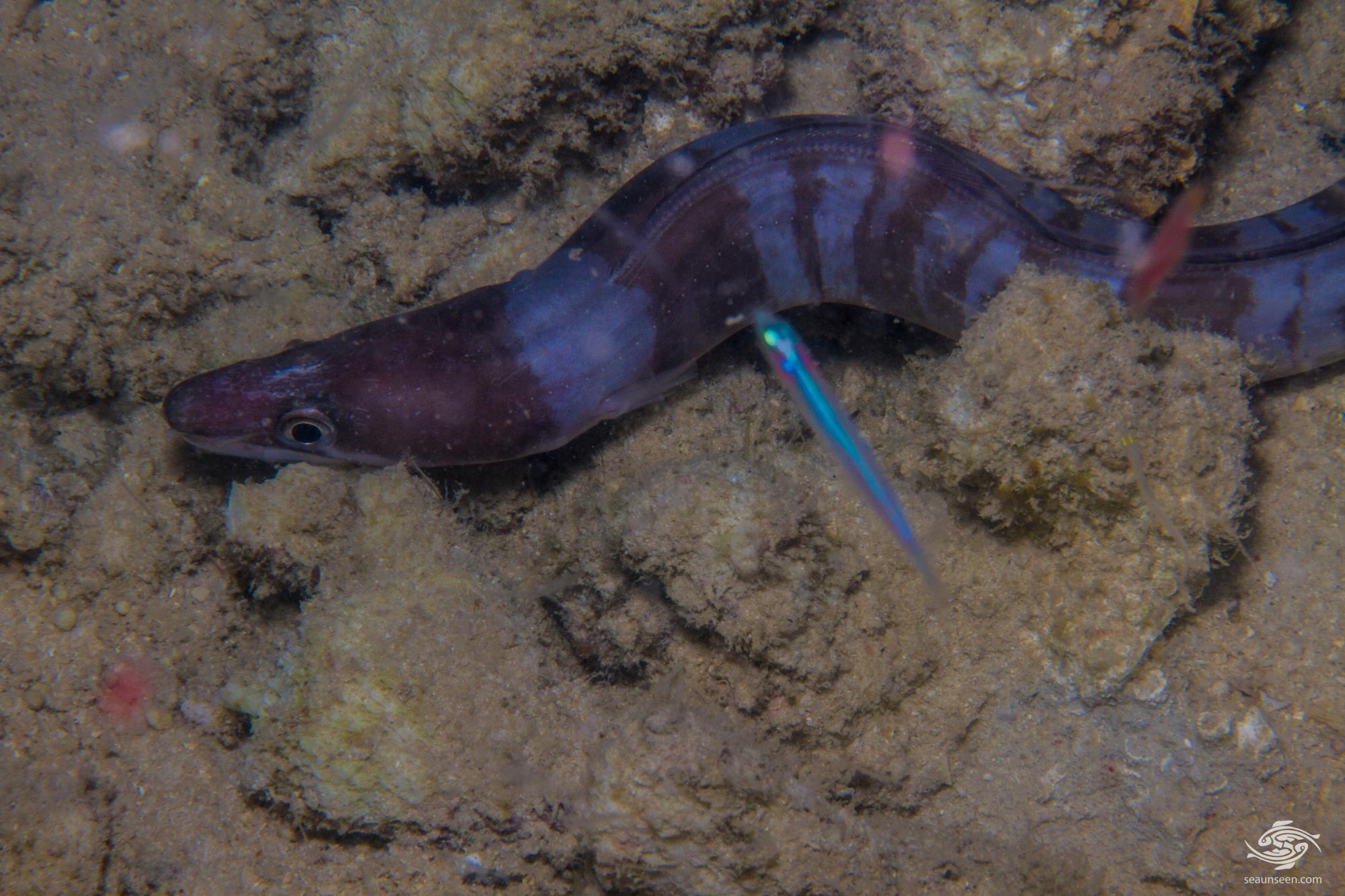 They are nocturnal feeders and are usually only seen out at night. During the day they usually remain well hidden. We have seen them as shallow as 4 meters at night and unlike Moray Eels they seem to freeze rather than swim off. 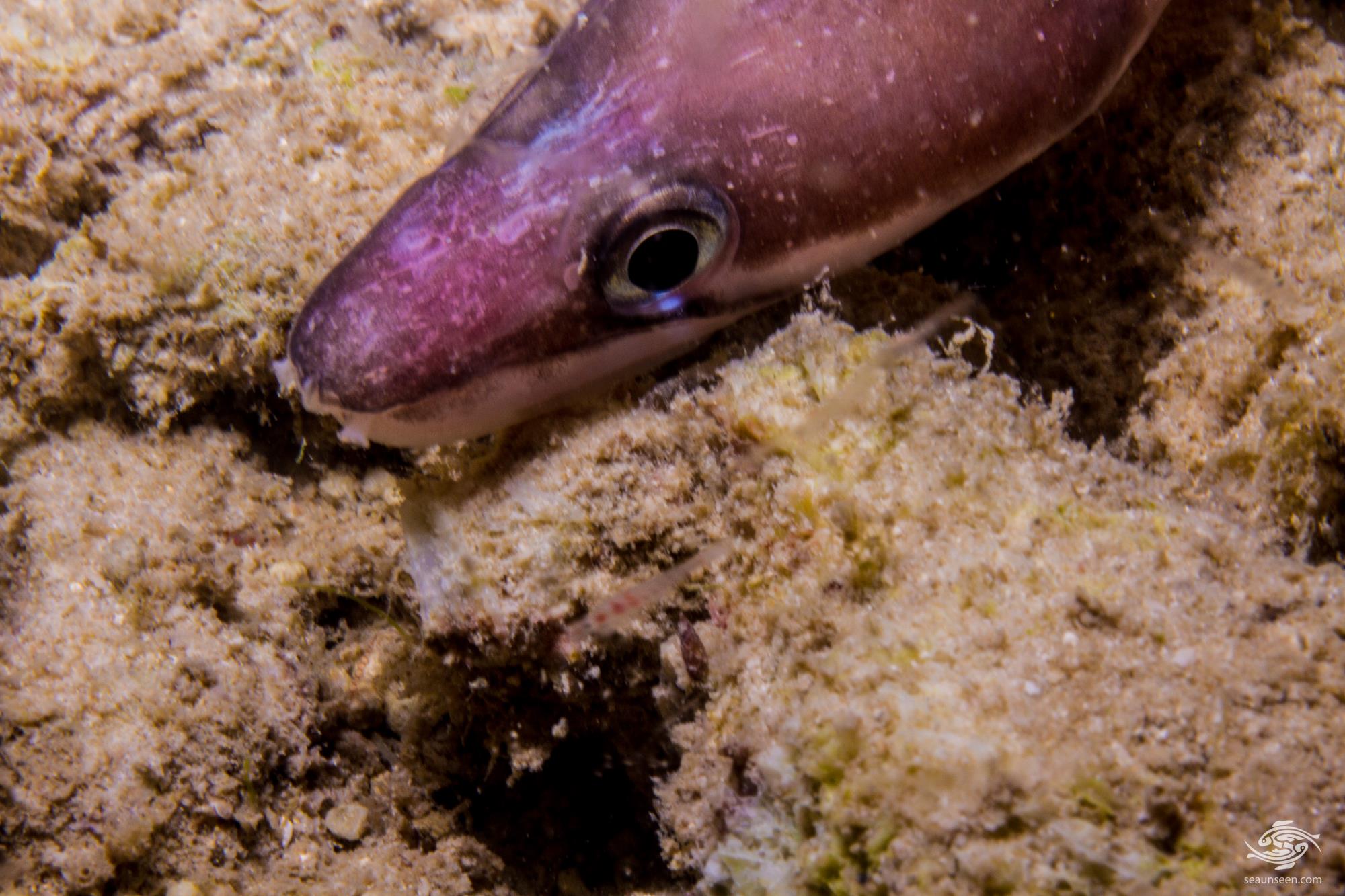 The Longfin African Conger Eel is widespread across the Indo-West Pacific area, being found from the East Coast of  Africa , Red Sea and Persian Gulf included, across to Southern Japan in the north , Australia and Lord Howe Island in the south including the Marquesan and Easter islands, but excluding Hawaii where they are replaced by C. marginatus. They are found on sandy and grassy areas usually close to reef flats and in estuary’s as well as outer reef flats to depths of 80 meters. 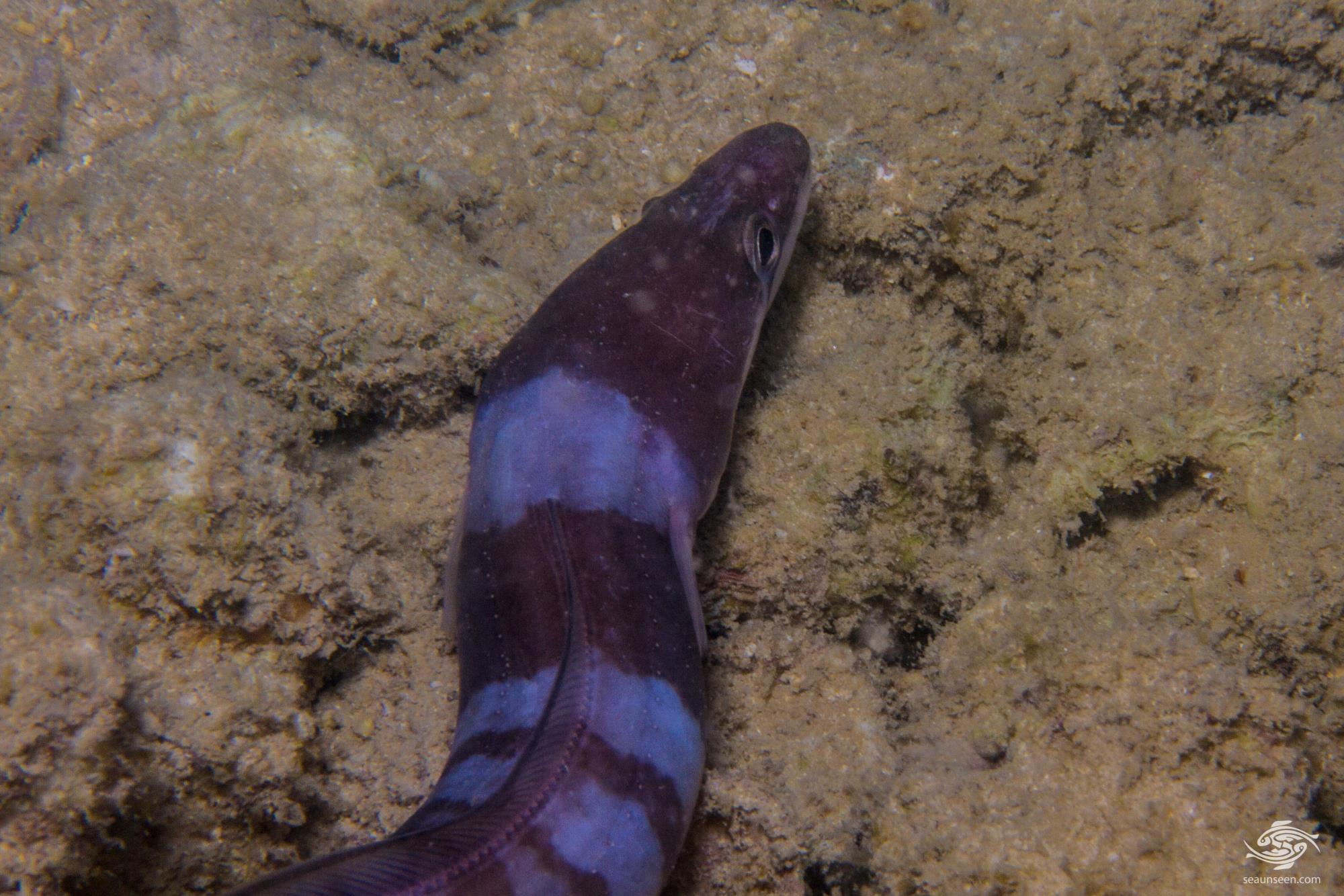 The Longfin African Conger Eel is carnivorous and nocturnal.  They feed mainly on small fish and crustaceans. Given that they are sometimes caught on hook and line they probably scavenge as well. 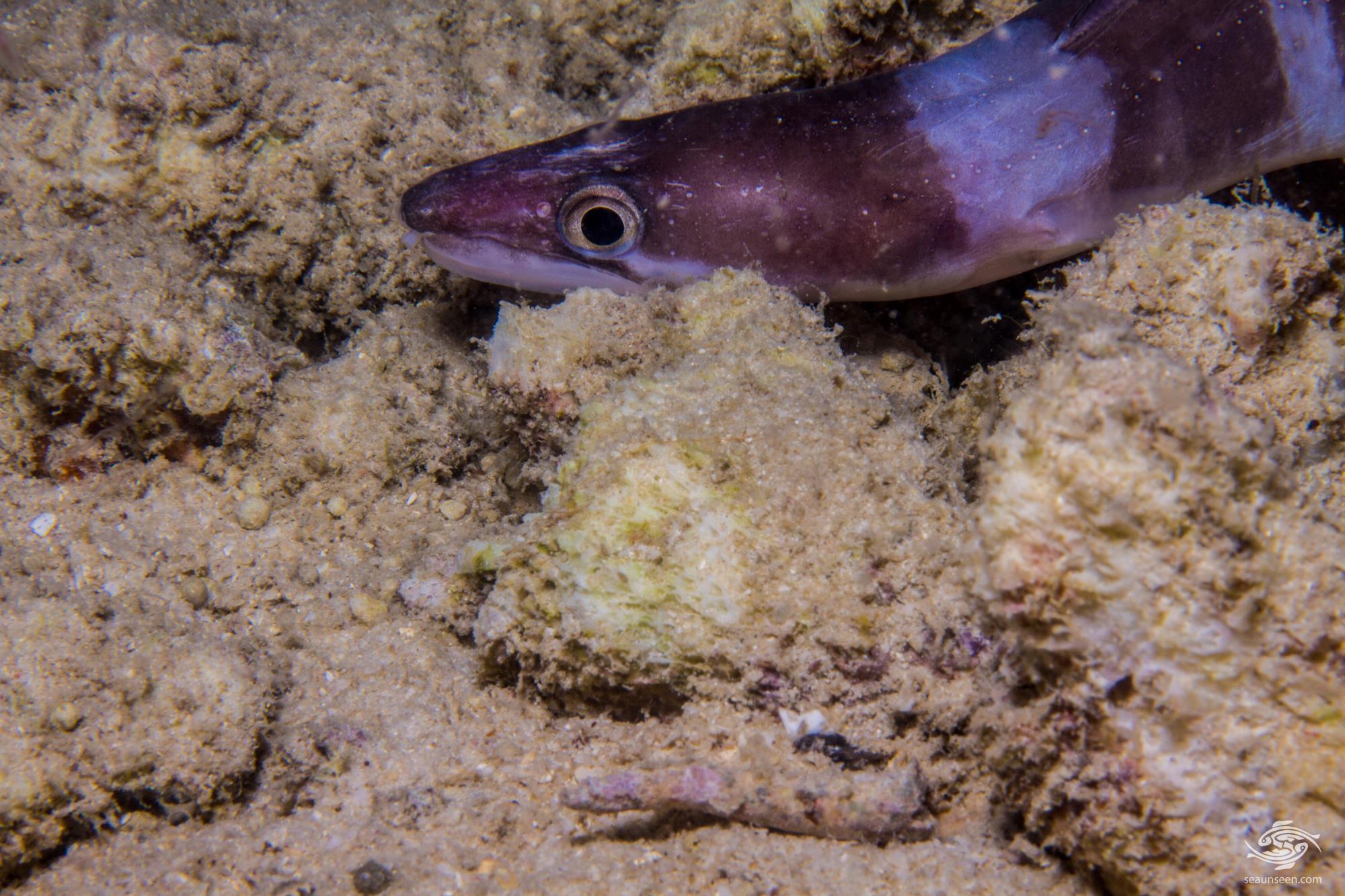 Very little if anything seems known of their reproductive habits and there do not appear to be any studies on them.  The larvae are known to be planktonic and to live in the coastal zone, but other than this appears to be no literature.

Longfin African Conger Eel are caught in the gulf area in nets and on hook and line and are marketed fresh. 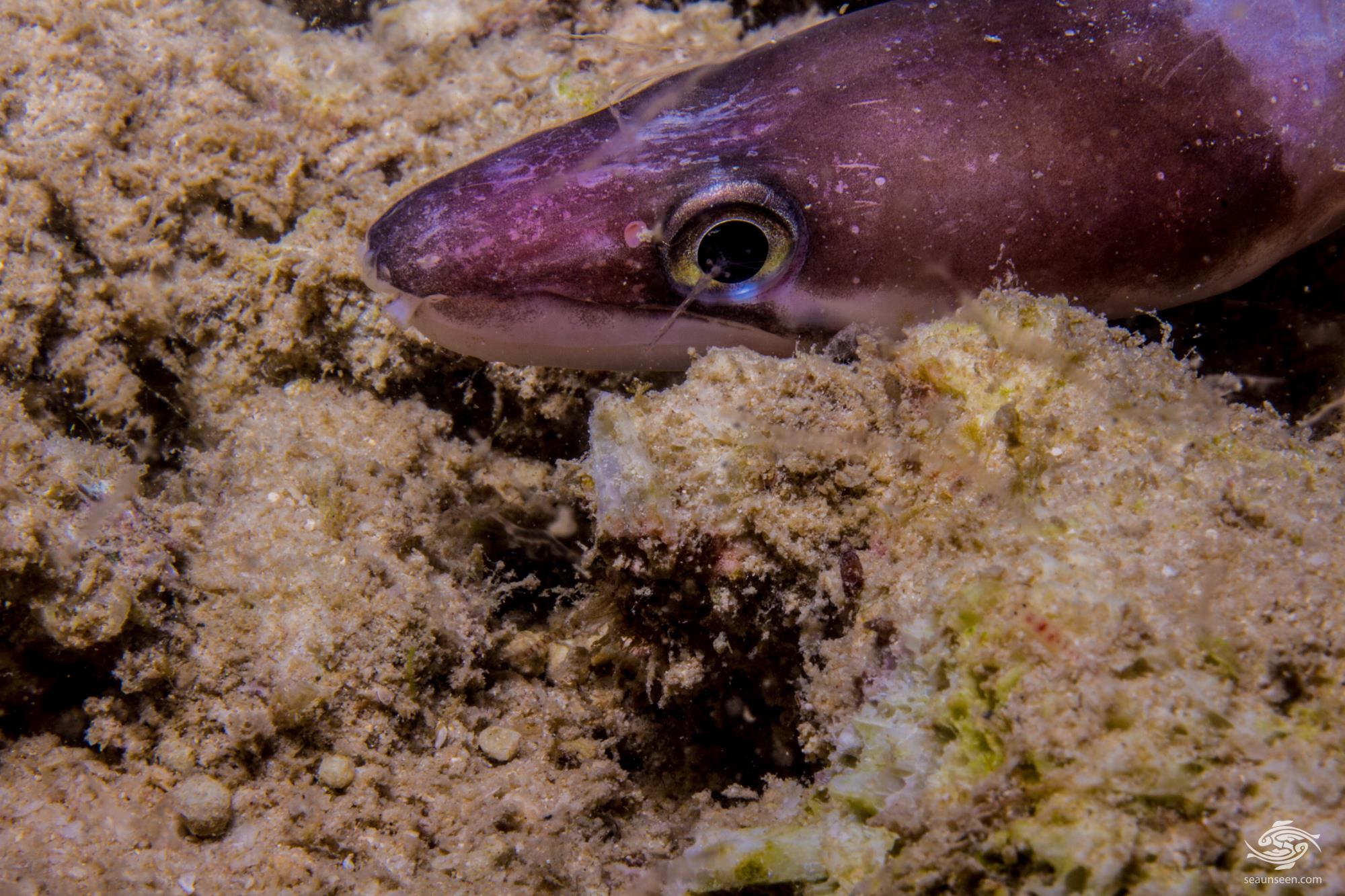 Longfin African Conger Eel are not commonly kept in aquariums but may be seen in some public Aquariums.