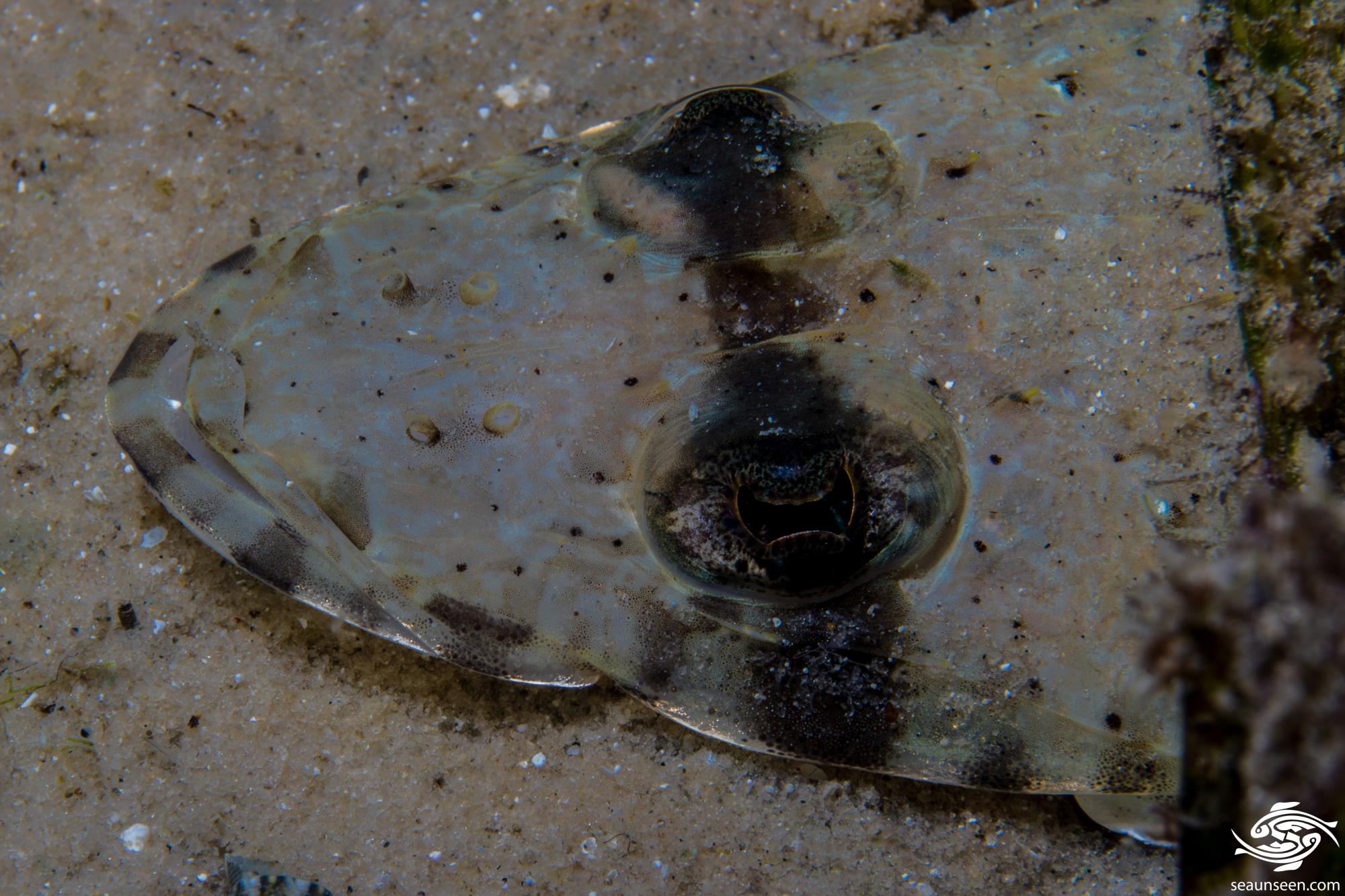 The Longsnout flathead (Thysanophrys chiltonae) was first described by Schultz in 1966 and they are probably the most common of the smaller flatheads in Tanzanian waters.  The specimens in the images were identified with the kind assistance of Elaine Heemstra and Hisashi Imamura. The specimens photographed in the images were all seen at night and were all photographed on the Tanzanian coast. It is likely that they are able to darken their coloration at night. 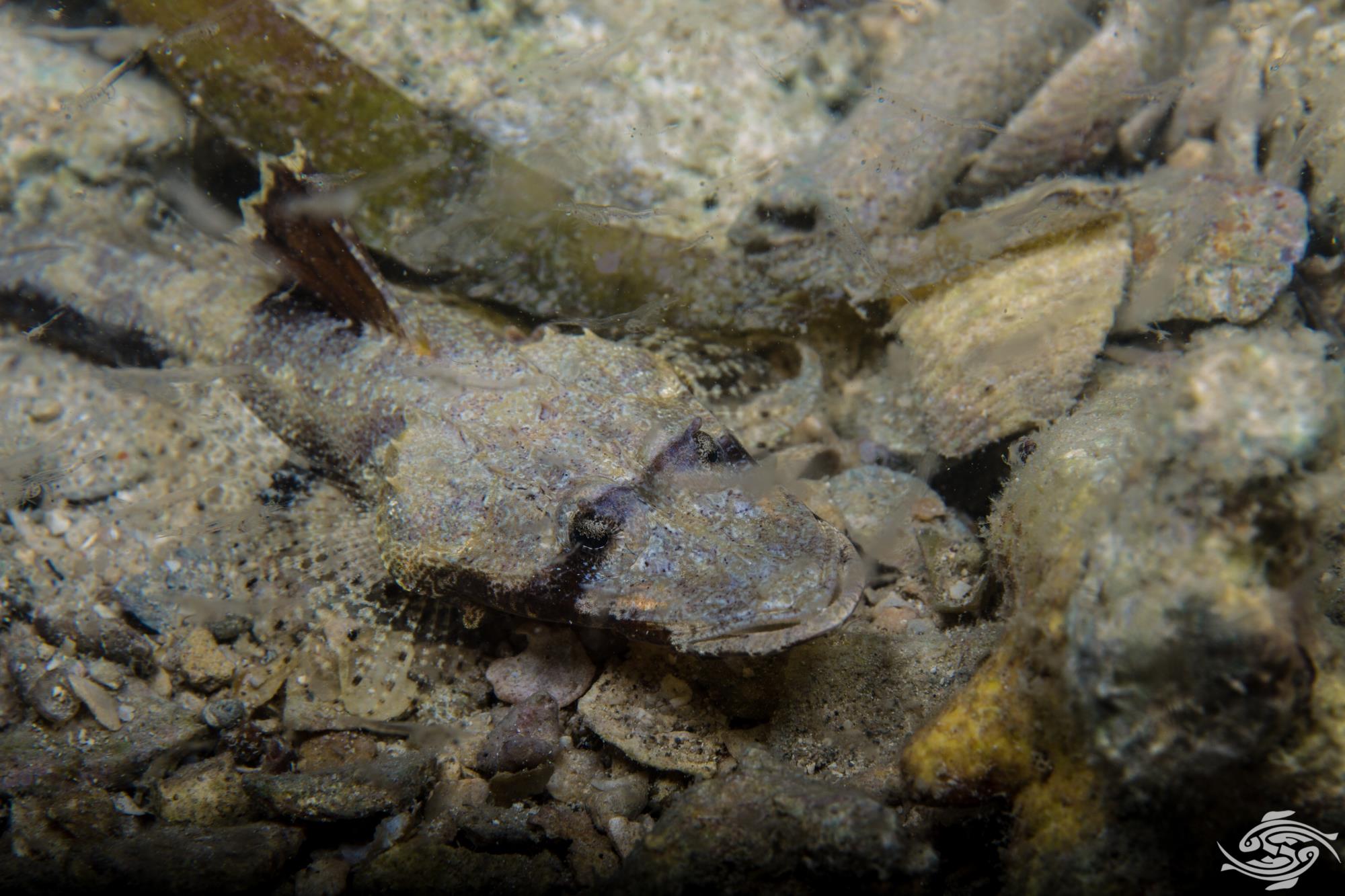 The Longsnout Flathead has a typical dorso-ventrally flattened body common with all the flatheads with a proportionally larger jaw than the others giving it its name. The head is flat and tapers down to a narrow tail.  The upper body is usually fairly lightly colored mottled beige and darker brown color.  The dorsal fin is usually a dark black brown color and ventrally the body is a similar dark brown color. There is a distinctive fairly thin dark brown stripe across the eyes extending to the jaws.  The eyes are set on the sides of the head and there is quite a gap between them.  The eyes have small tassels on the upper eye and there are a series of brown bars on the lip of the lower jaw.

The pectoral fins are which are spread to the side when it is sitting on the bottom are also a mottled white and brown color on the spines. They seem to grow up to approximately 25 centimeters. 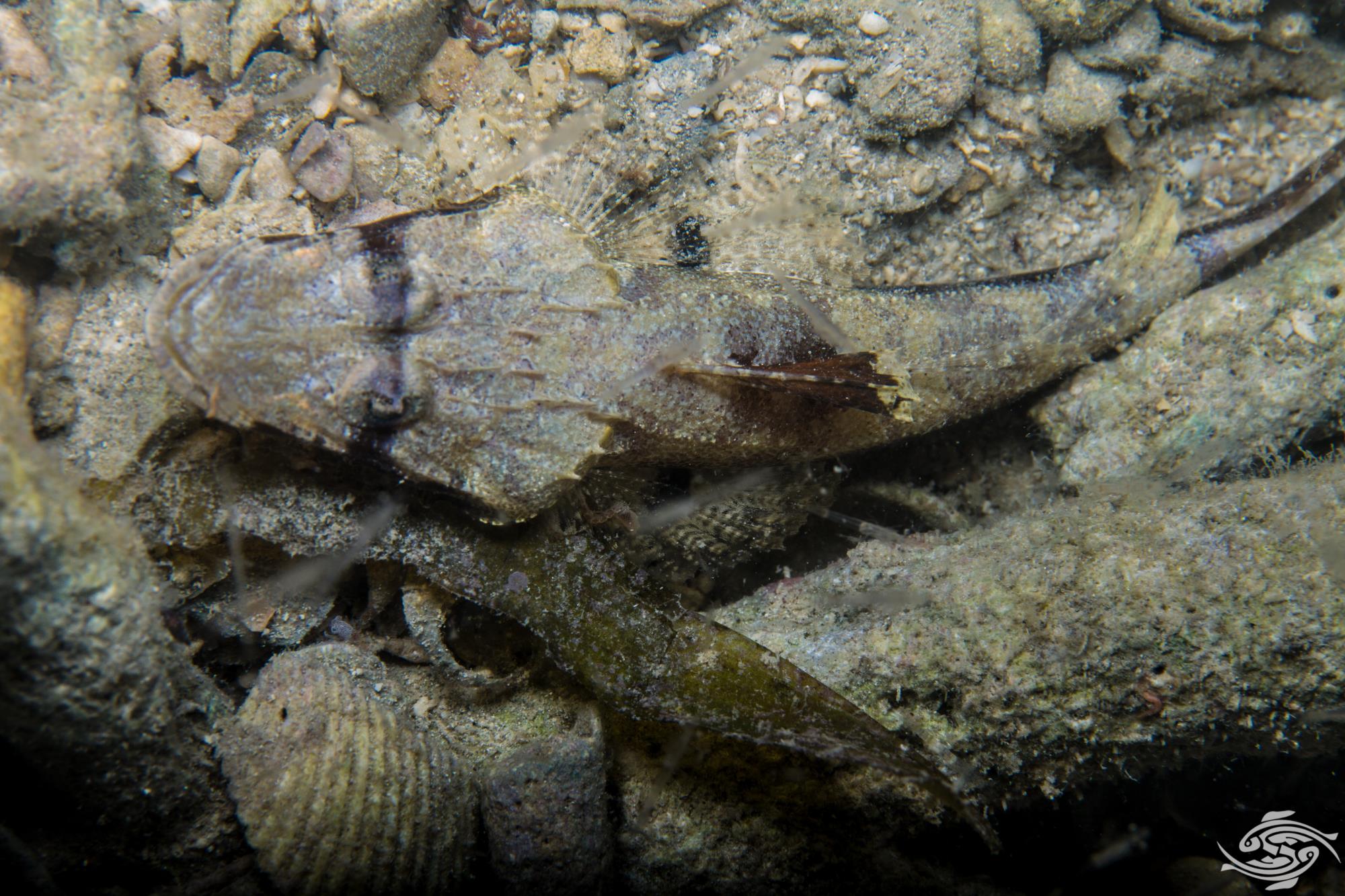 LONGSNOUT FLATHEAD IN THE WILD

Longsnout Flathead are ambush predators and during the day they are often seen partially buried in the sand but at night they seem to move out into the open.  Quite possibly they feed at night.  They seem to favor sandy areas during the day but at night are commonly seen out on the rubble where their coloration camouflages them quite well.  They are often partially under pieces of weed and actively use the environment to camouflage themselves.  Although they sit very still when approached by a diver, they often lift their dorsal fin either as a threat or perhaps to just to show they are there. If disturbed sufficiently they will dart off in a short hop and dig into the sand. 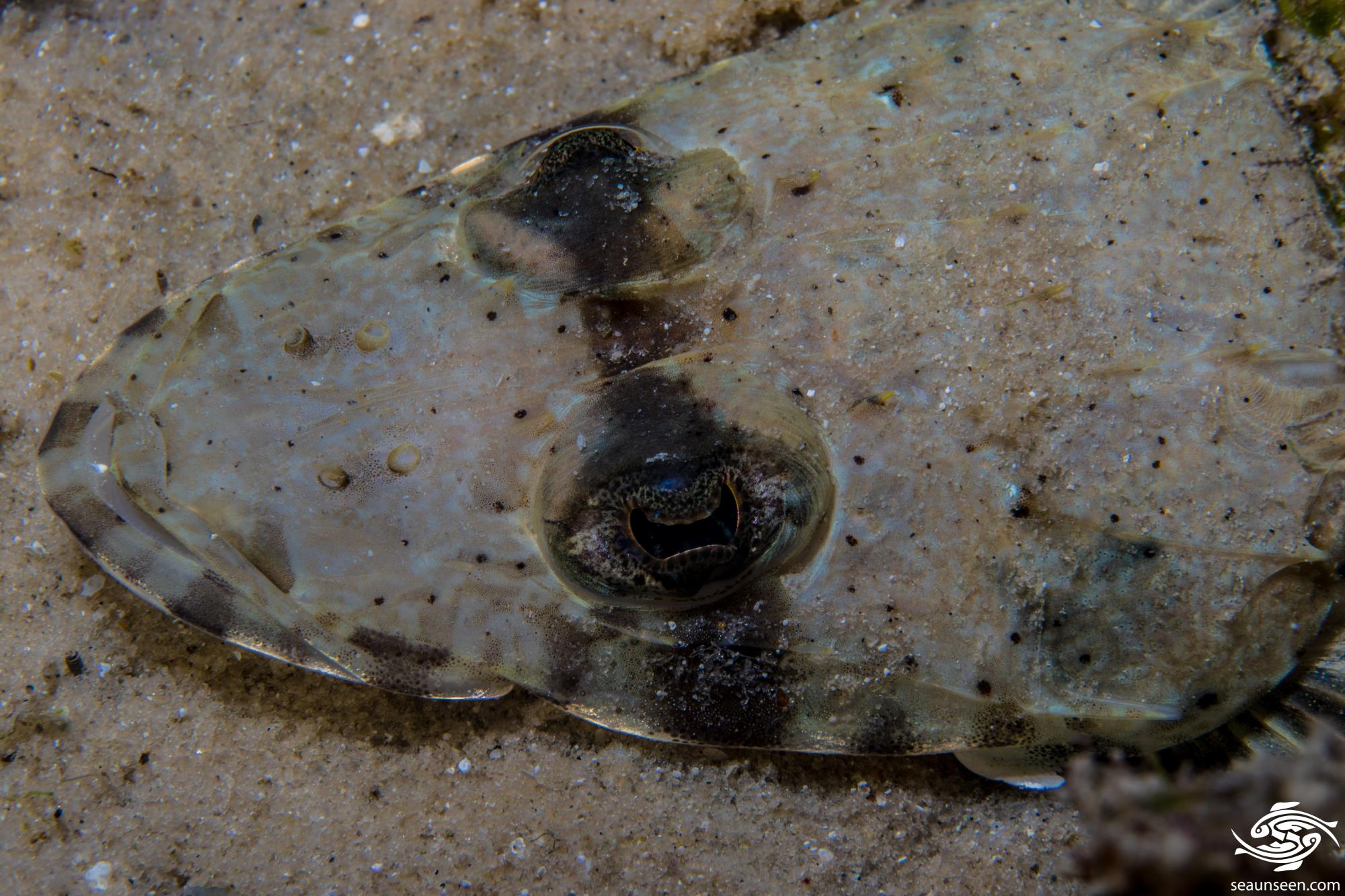 Longsnout flathead are usually found in one to four meters of water , more often than not in protected areas where there is not a lot of surge.  They have been found down to 100 meters but we only see them in the shallows. They are found across the Indo west Pacific area from East Africa across to the Marquessa Islands and North to Japan , south to Australia. 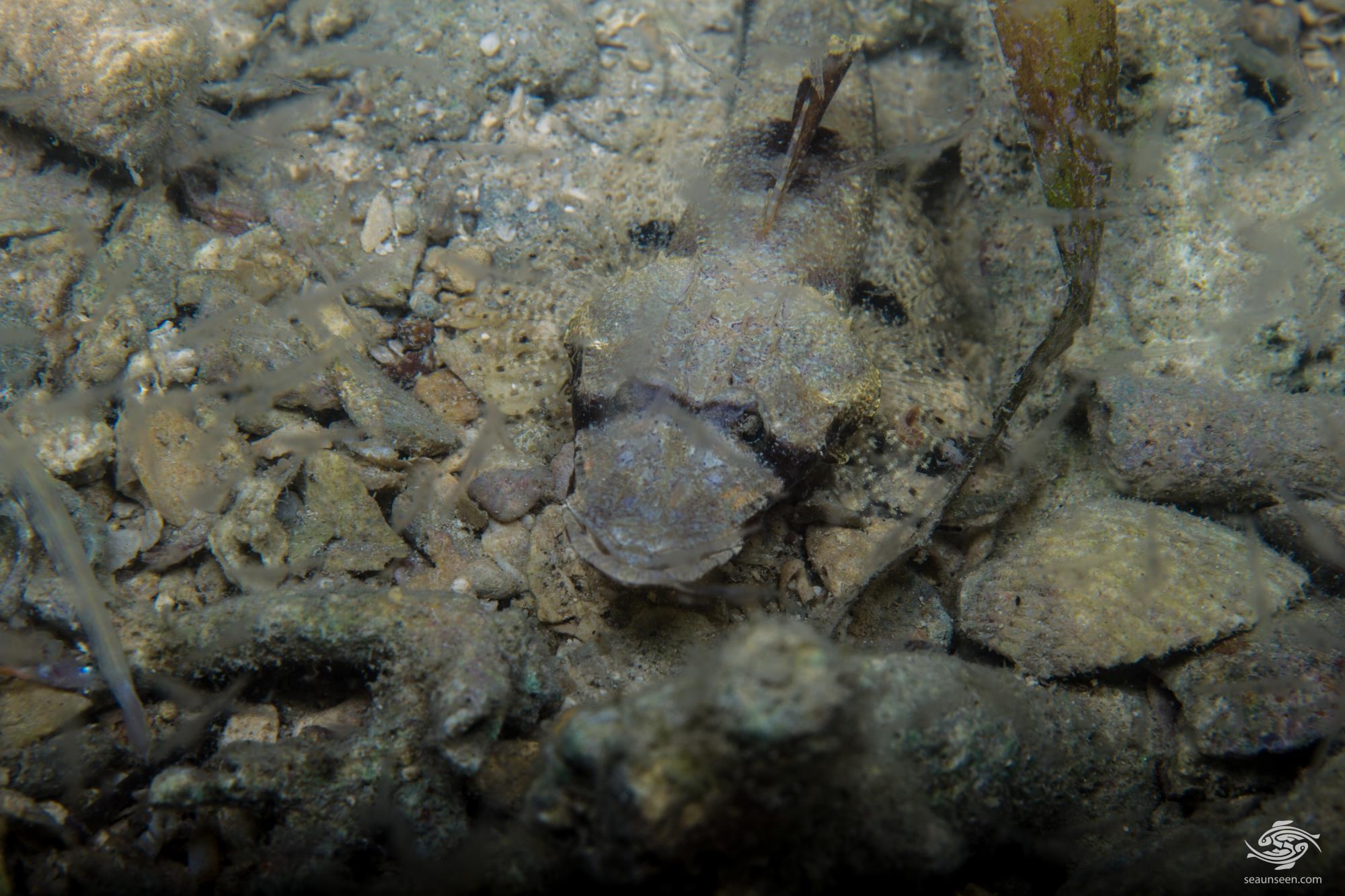 The Longsnout flathead probably eat almost anything that will fit into their mouths but are reported to favor crustaceans and small fish. 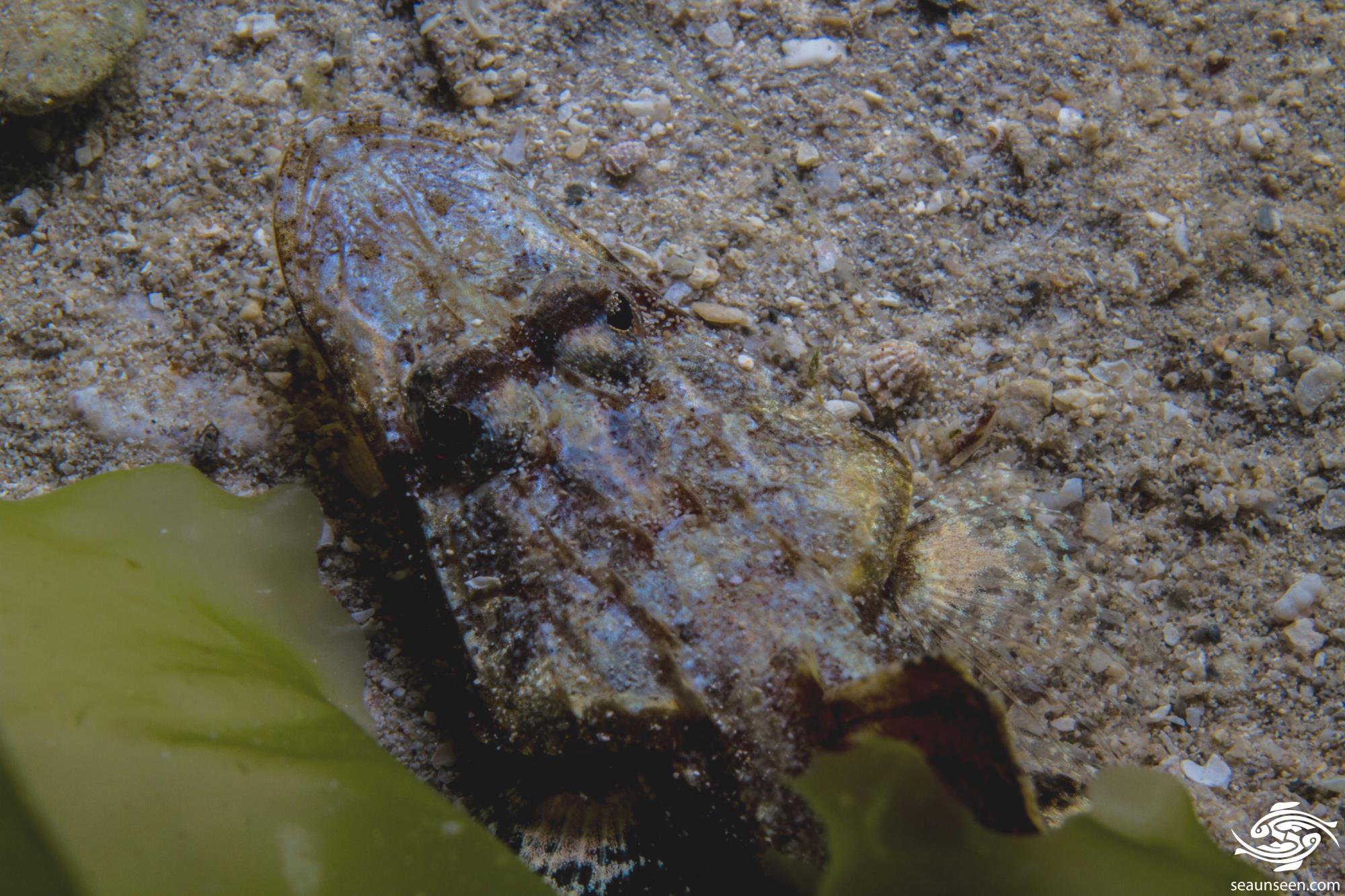 Some aquarists keep the Longsnout flathead as specialty items but generally only the large commercial aquariums will keep them and they require a large tank and prefer live food. 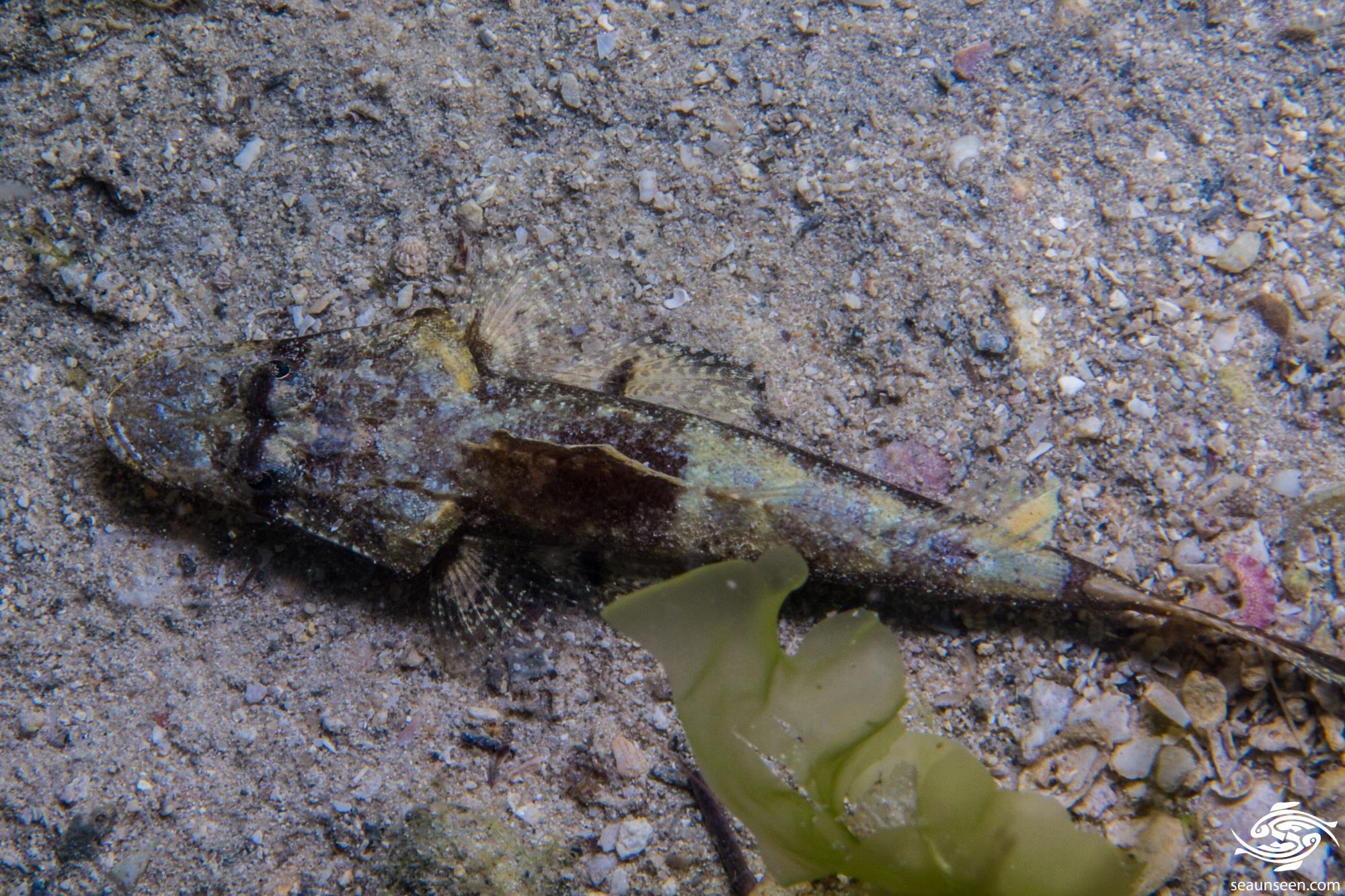