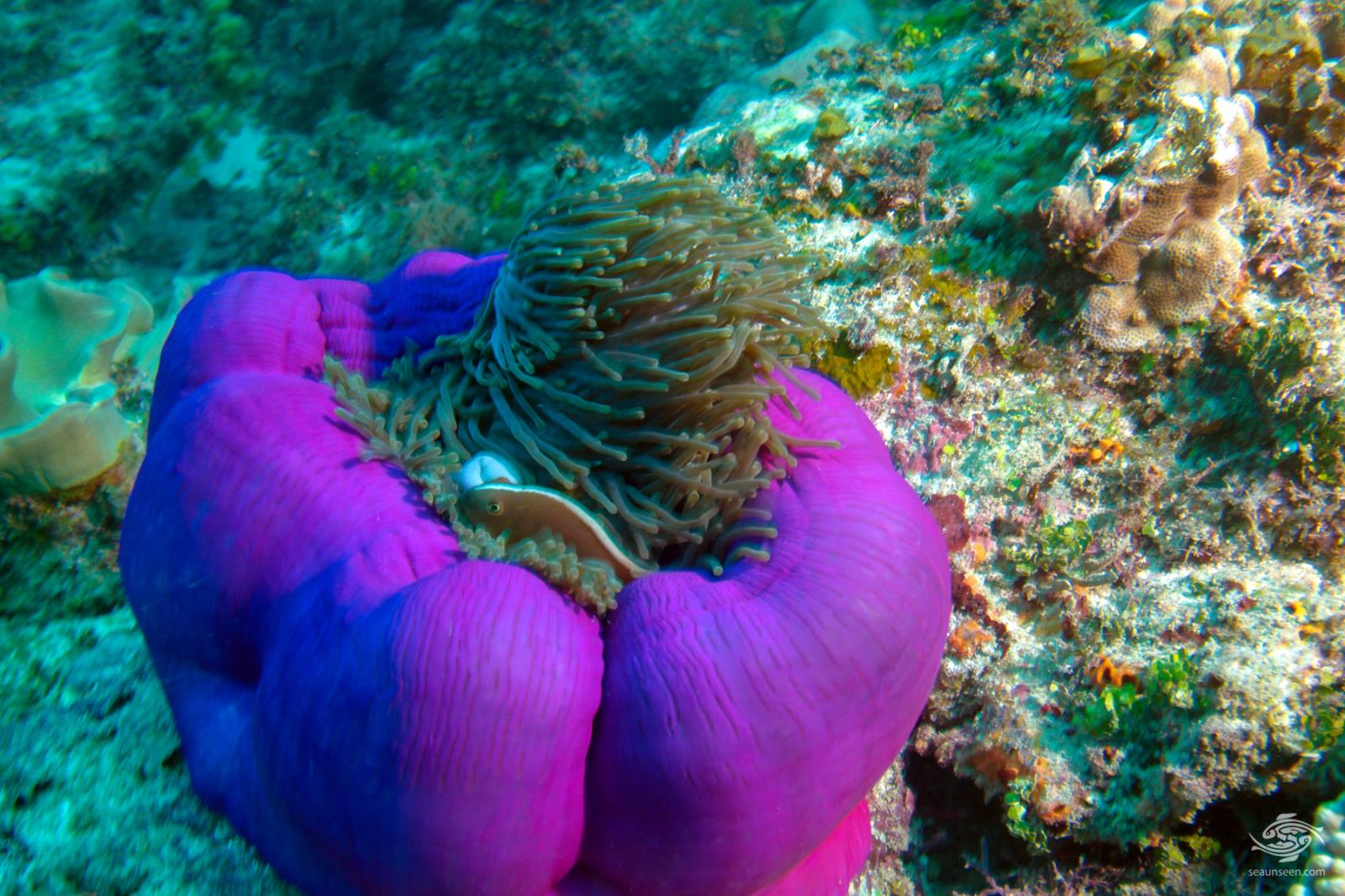 The magnificent sea anemone, Heteractis magnifica is also known as the Ritteri anemone. Previously they were known as Radianthus ritteri but they have now been reclassified. They are the commonest large anemone in Tanzanian waters and on occasions in some areas several hundred can be found in close proximity. These congregations sometimes last for several months.

The magnificent sea anemone has an oral disc which generally is between 20 and 50 centimeters, but some have been seen personally that are slightly larger. The disk its self is fairly flexible. The oral disc and the tentacles are usually a light brown yellow color but can be whitish.

The tentacles are long and thin and can grow up to 12 to 14 centimeters in length with a slightly bulbous tip. The tip can be branched and in Tanzania, sometimes has a purple dot on the tip. The pedal column in Tanzania is most often brown or red-purple but a light blue has been seen once before. 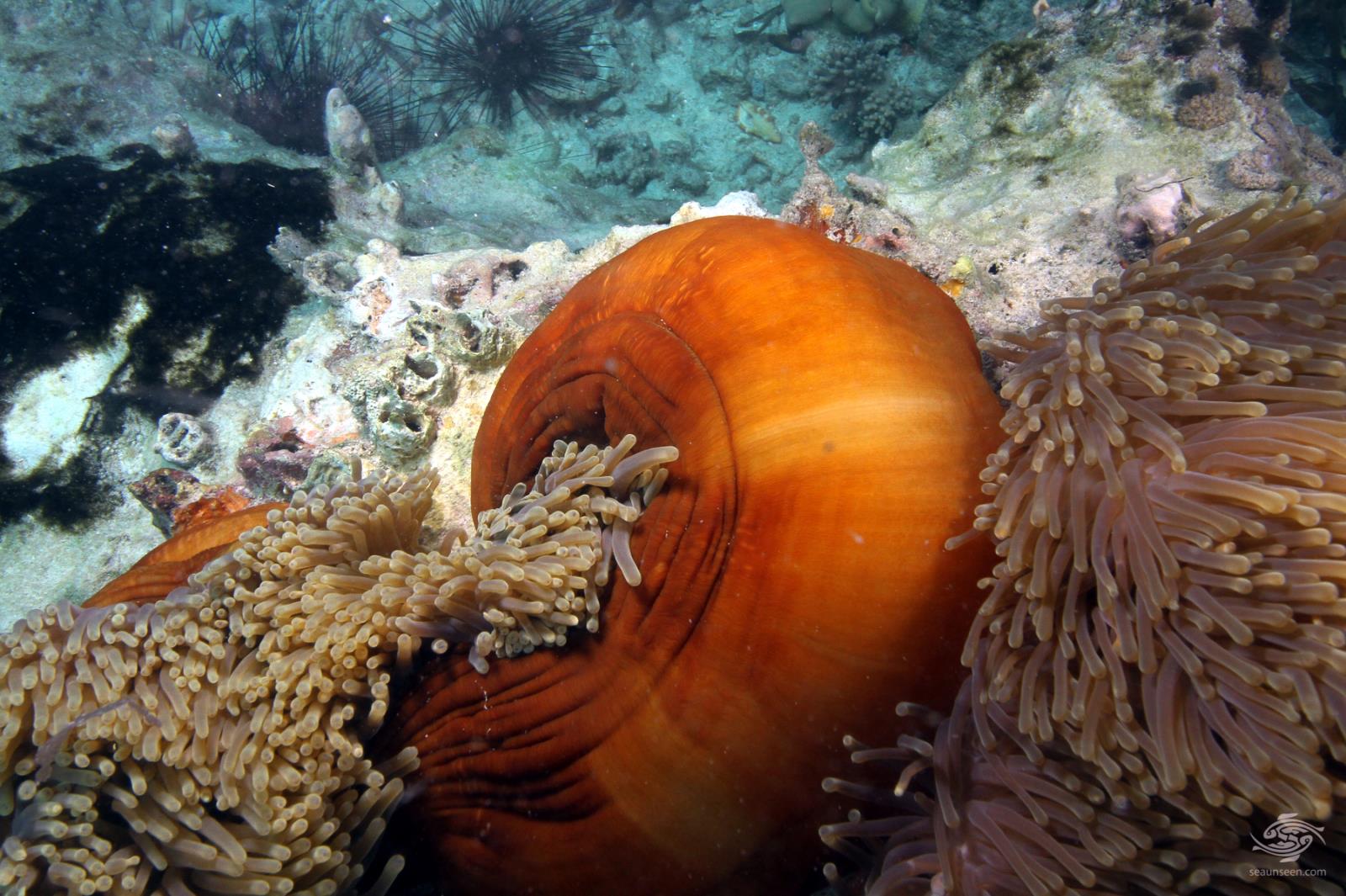 The magnificent sea anemone prefers hard flat substrates that are well exposed to light and with lots of current and is generally found from 1 meter to 20 meters in depth. Occasionally they are seen deeper around 27 meters but they are most common from 2 meters to 18 meters. The larger anemones are generally seen in deeper water in Tanzania, often with one or two in a small area but they are more often seen singly. It is common to see large numbers of smaller individuals alongside each other in the shallows.

At the Yacht club in Dar es Salaam there is a small coral bommie which for years had no anemones on it but in 2014 a single anemone suddenly appeared on it and a few days later a pair of Skunk clowns (Amphiprion akallopisos) were resident. The nearest population of the anemones and the Skunk clowns is some 3.5 nautical miles away. While the anemone landing on the bommie and attaching probably has a large element of randomness in it, the Skunk clowns themselves possibly have a method of sensing anemones from a fair distance. 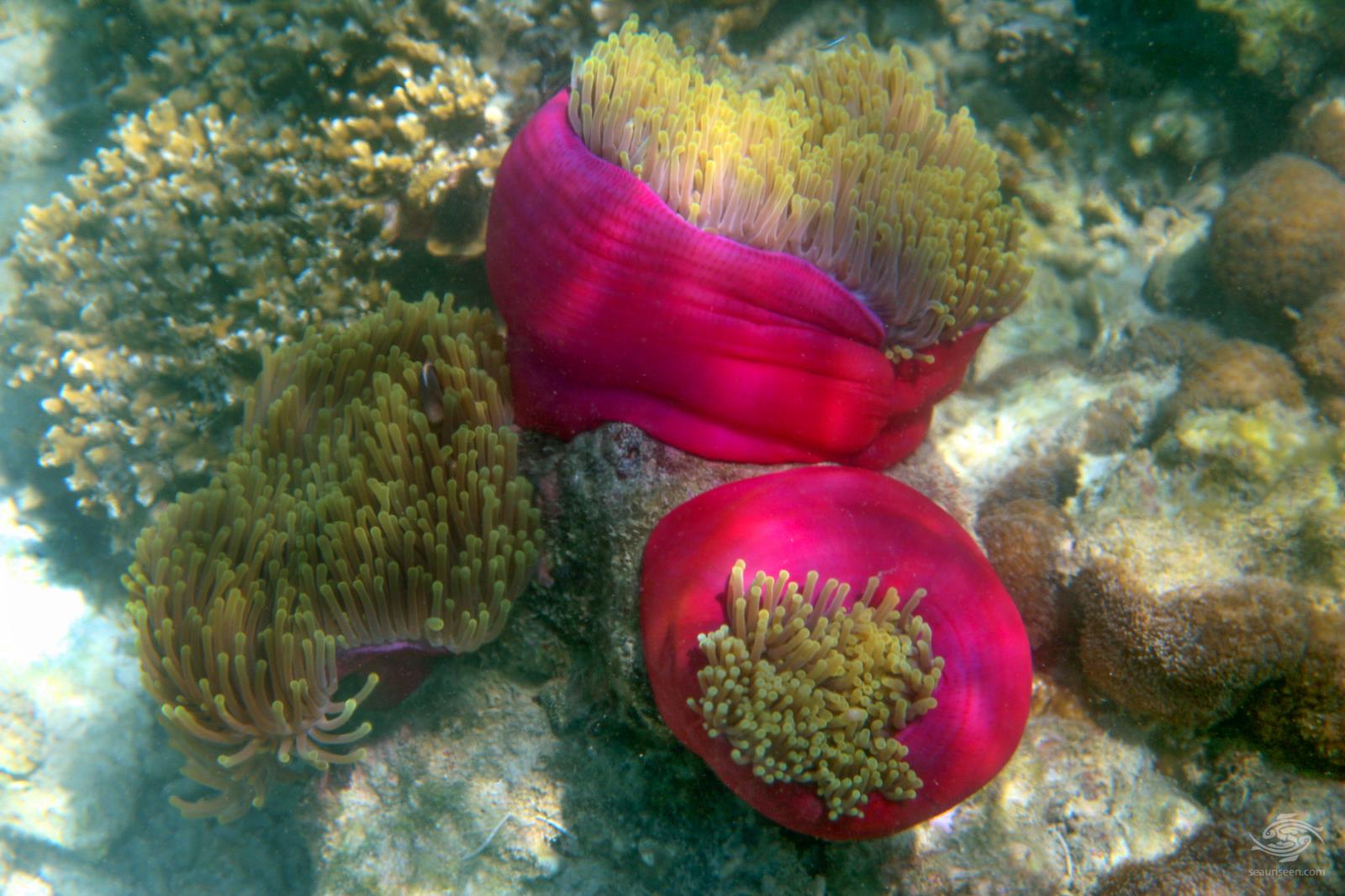 The magnificent sea anemone is widespread throughout the tropical and subtropical waters of the Indo Pacific, from the east coasts of Africa to the Red sea, to Polynesia and south from Japan to Australia and New Caledonia. 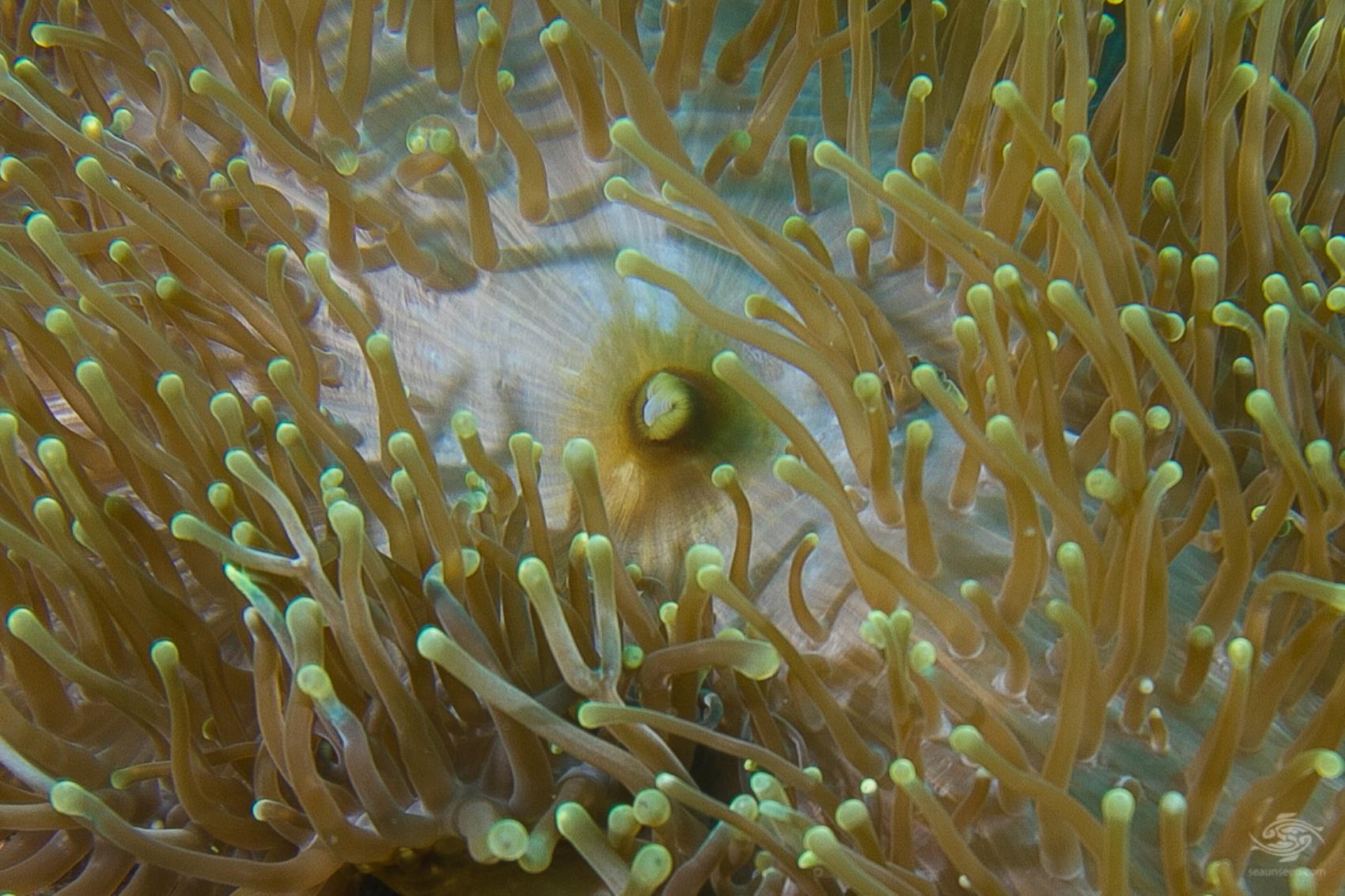 As with other anemones the magnificent anemone forms symbiotic relationships with single celled algae. The anemone benefits from the algae’s photosynthesis, namely oxygen and food in the form of glycerol, glucose and alanine. The algae in turn obtain protection against herbivores from the anemones stinging cells and good exposure to light.

They also use their venomous cells or nematocysts in the tentacles to sting and capture prey. Nutrients are absorbed from the water around them and they obtain some nutrition from a commensal relationship with clown fish which reside in the anemones tentacles.In Tanzanian waters this is almost exclusively the Skunk clown, Amphiprion akallopisos. It is extremely unusual to see Amphiprion clarki or Amphiprion allardi in them. 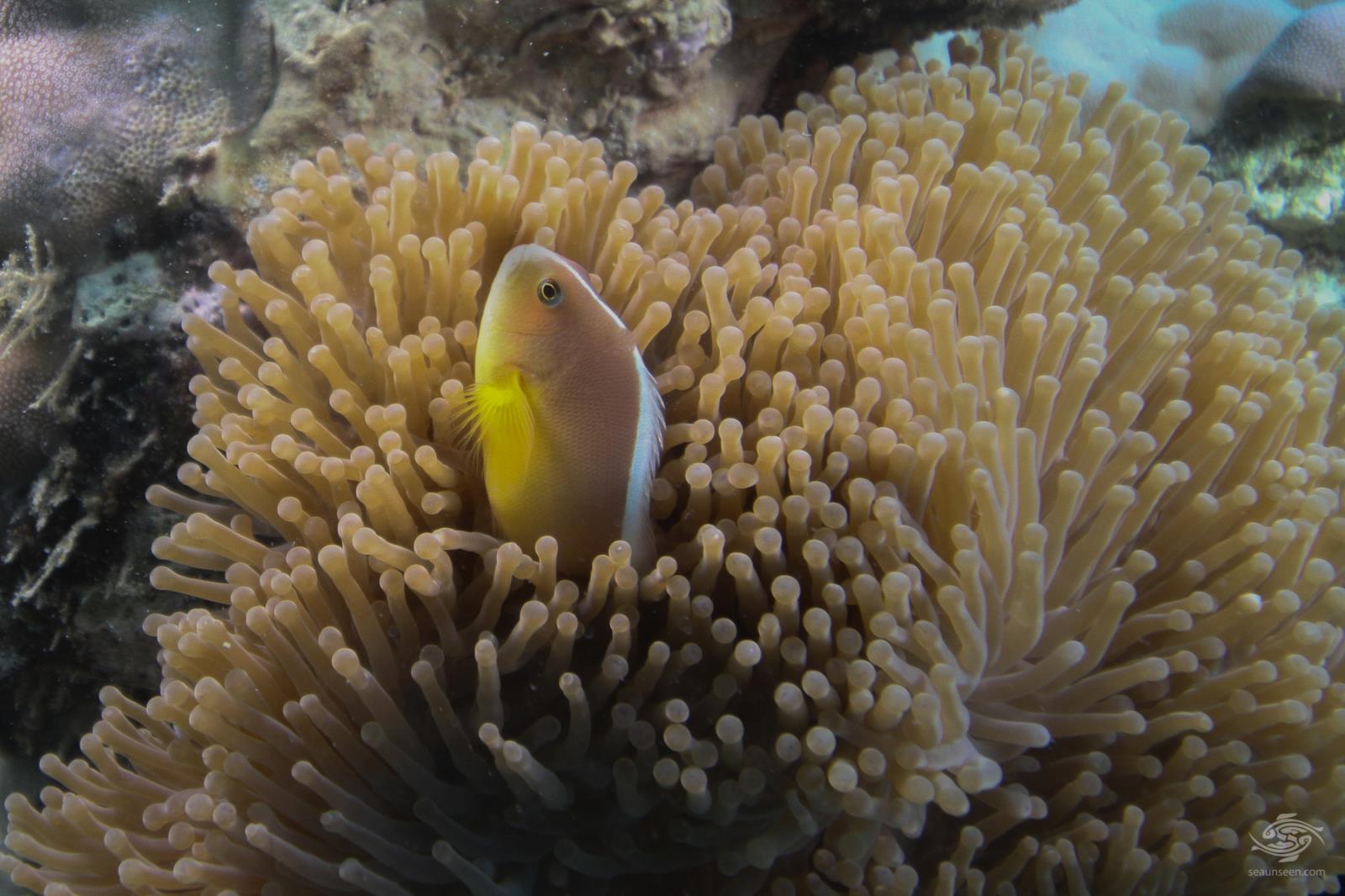 Magnificent anemones can reproduce asexually by budding or splitting and by sexual reproduction. In sexual reproduction males release sperm into the water, which stimulates females to release eggs into the water. Fertilization occurs when the two meet. Anemones eject eggs and sperm through the mouth. The fertilized eggs then develop into planula’s which settle and grow into a single polyp.

Due to their habit of moving around an aquarium and getting themselves hooked up in the filter, these anemones can be troublesome in an aquarium. They can ambulate several feet per day and always head for the area of maximum water movement and light. If it is possible for them to become entangled in the filter, they will. Usually with potentially disastrous results for the tank and the anemone. A large tank is needed to keep them and it can be difficult to get them to settle in an aesthetically pleasing spot as they often settle on the glass.

Magnificent anemone are often found in large aggregations in Tanzania and in the Red Sea. In Tanzania groups of thirty to forty are not uncommon in a relatively small area. To date only noted in the shallows on reef tops, but they have been noted in aggregations of several hundred in the Red Sea. They move often along the shallow reefs in Tanzania by absorbing water and rolling up into a ball with the tentacles on the outside. This provides for protection against predators as can be seen in the images below.

They then drift with the current. Over the last sixteen years the movements on Bongoyo inside reef appear to be linked to seasonal changes between the North East Monsoon and the South East Monsoon and may relate to a drop off in current caused by the changes in prevailing winds. Interestingly large aggregations of the Bubble tip anemone (Entacmaea quadricolor) have also been noted but only on two occasions and the aggregations have disappeared never to be seen again.

At times the moving aggregations of the magnificent anemone become stranded in clearly unsuitable areas and have been noted hooked up in areas of stag horn coral before. The anemones seem to depart these areas together, presumably at night and must have some form of trigger that operates causing the group to collectively depart the area at the same time. They have been observed arriving in the same area at the same time. Interestingly when they arrive they are without clown fish but within a few days there are clown fish in them.

As the rolled up anemones have only been noted in the very early morning it is assumed that this behavior occurs at night but this is by no means a certainty. 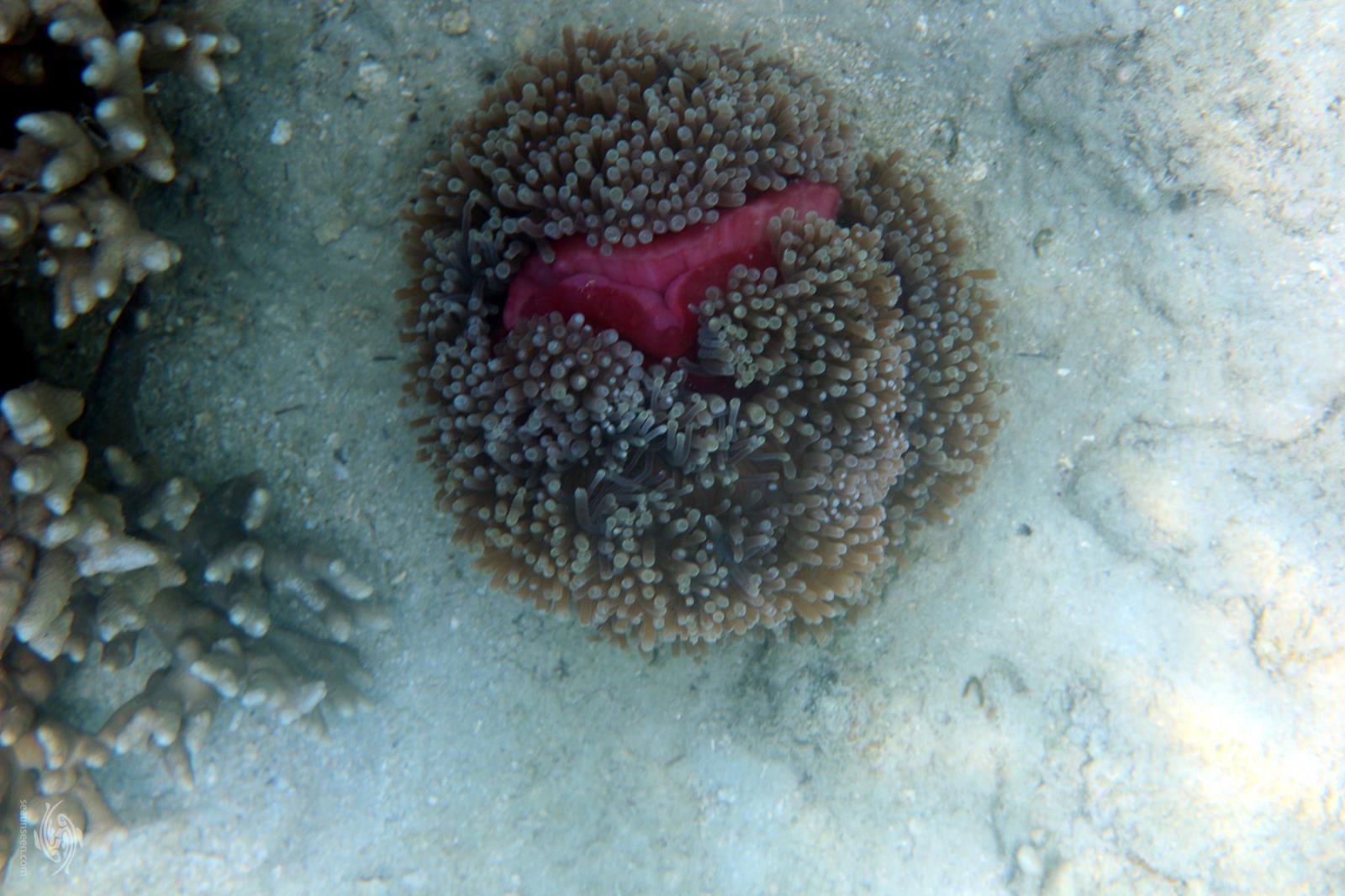 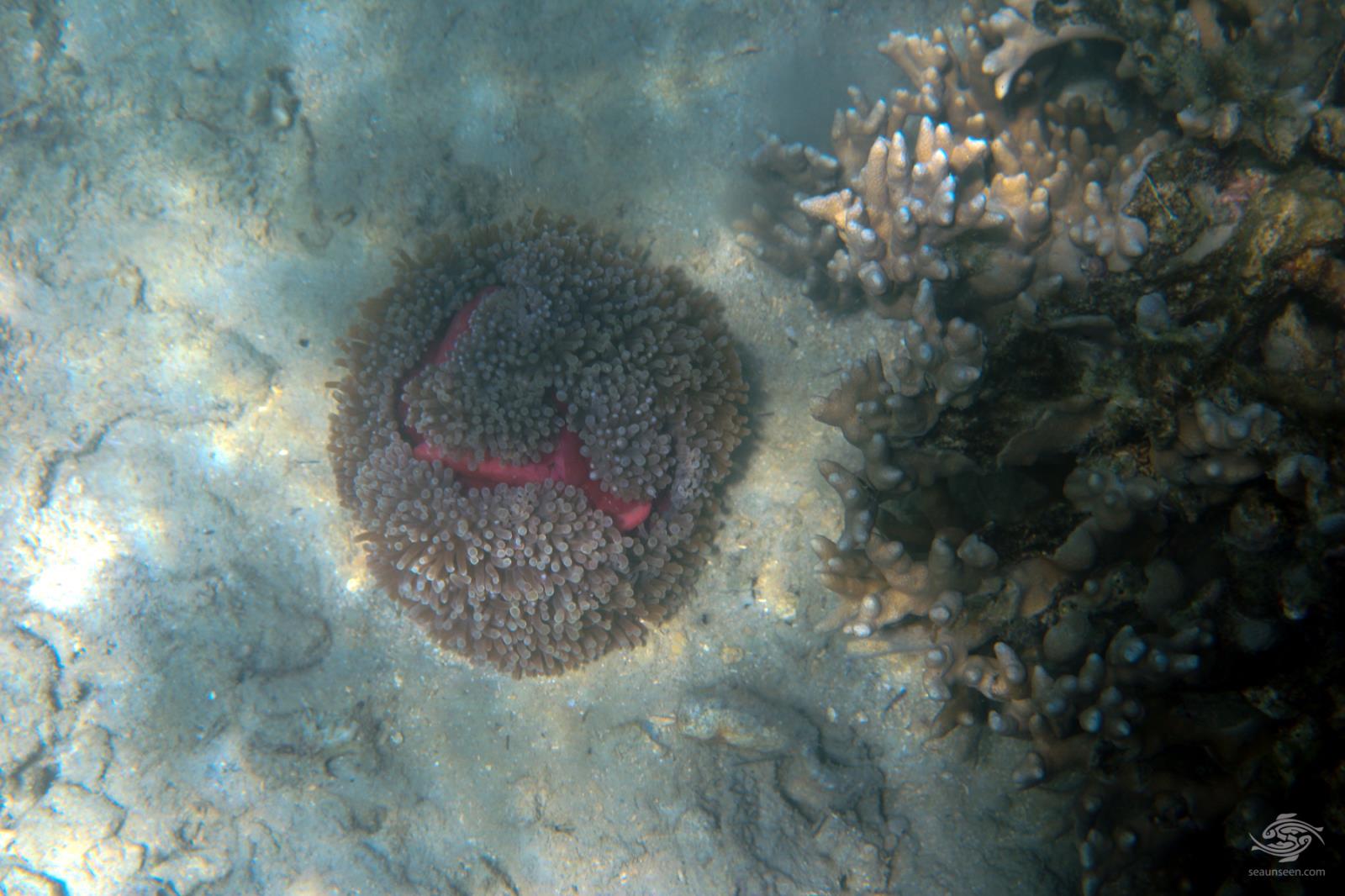 As with corals, magnificent anemone drop their algae when conditions are unfavorable. Usually in the wild they reabsorb them when the conditions become more favorable. These anemones in the images were seen in the shallows to the west of Mafia Island, Tanzania during a spell of hot water. As can be seen the tentacles are pure white in color.

They were in two to four meters of water depending on the tide and the water temperature was 32 C. From the prevailing weather conditions we assume that the temperature had been in this range for two to three weeks. Interestingly none of the anemones had clownfish in them. Free swimming clownfish were seen for the first time ever by ourselves. When followed the clownfish swam around an anemone but never went into it. All the anemones in the area were bleached. 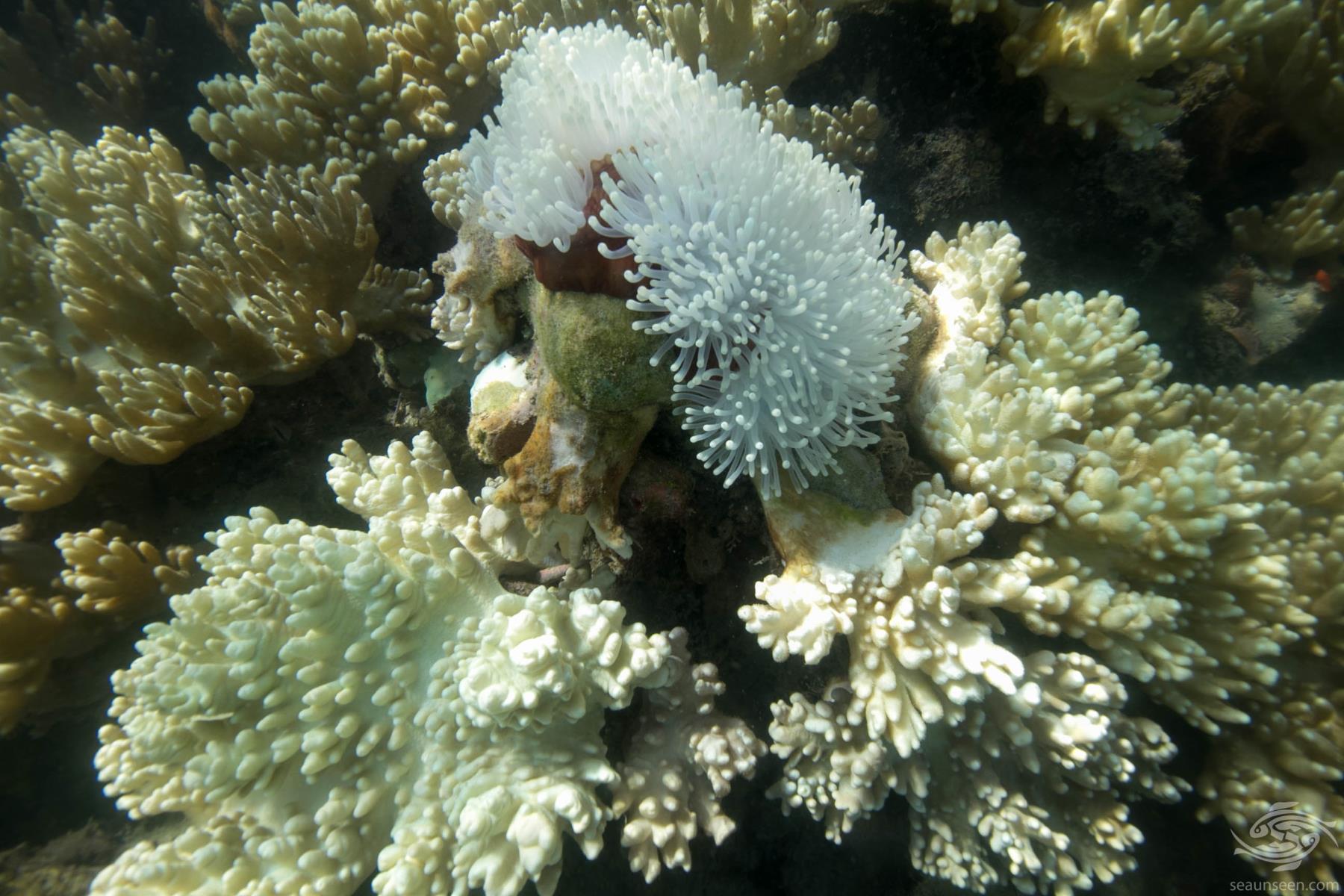 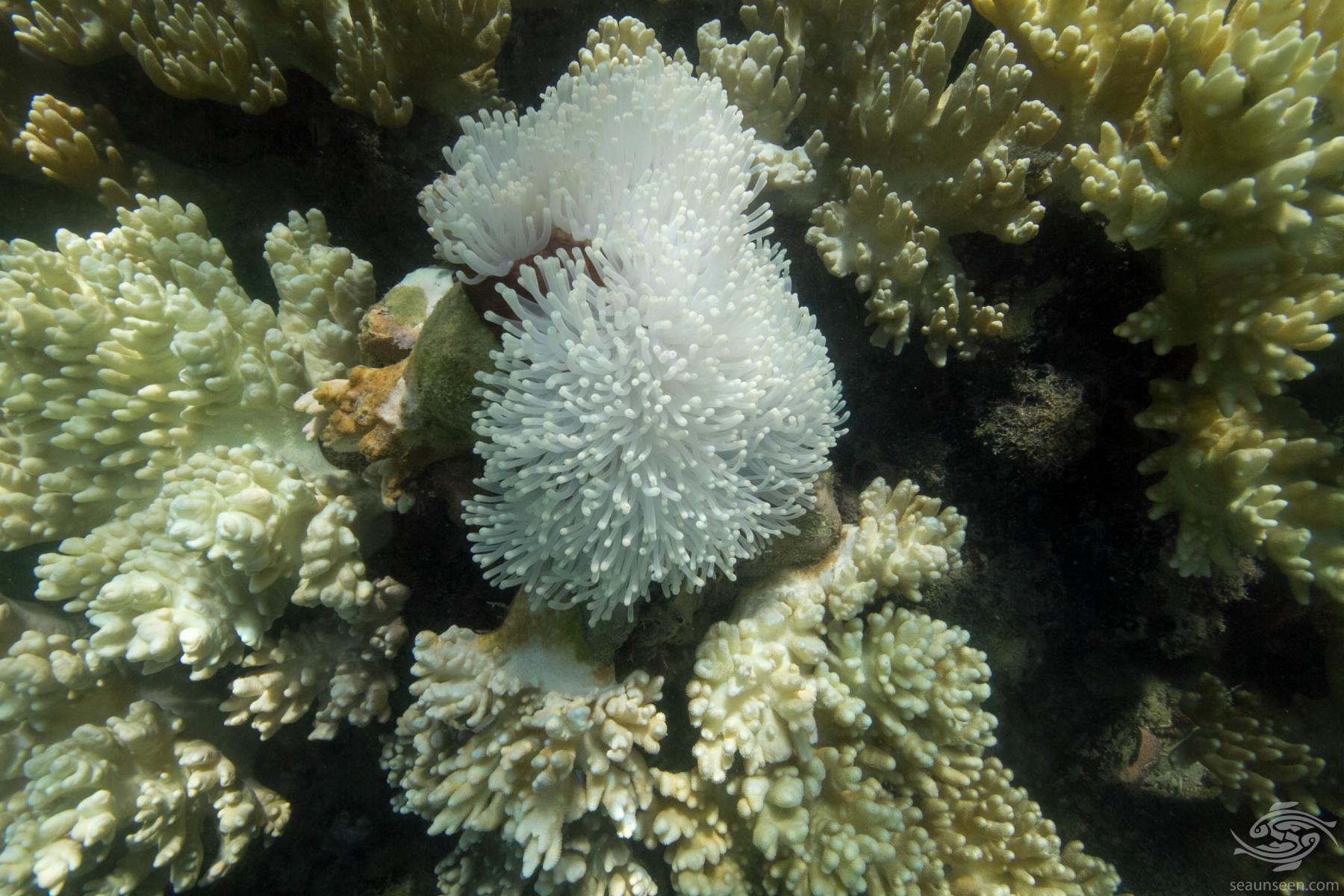 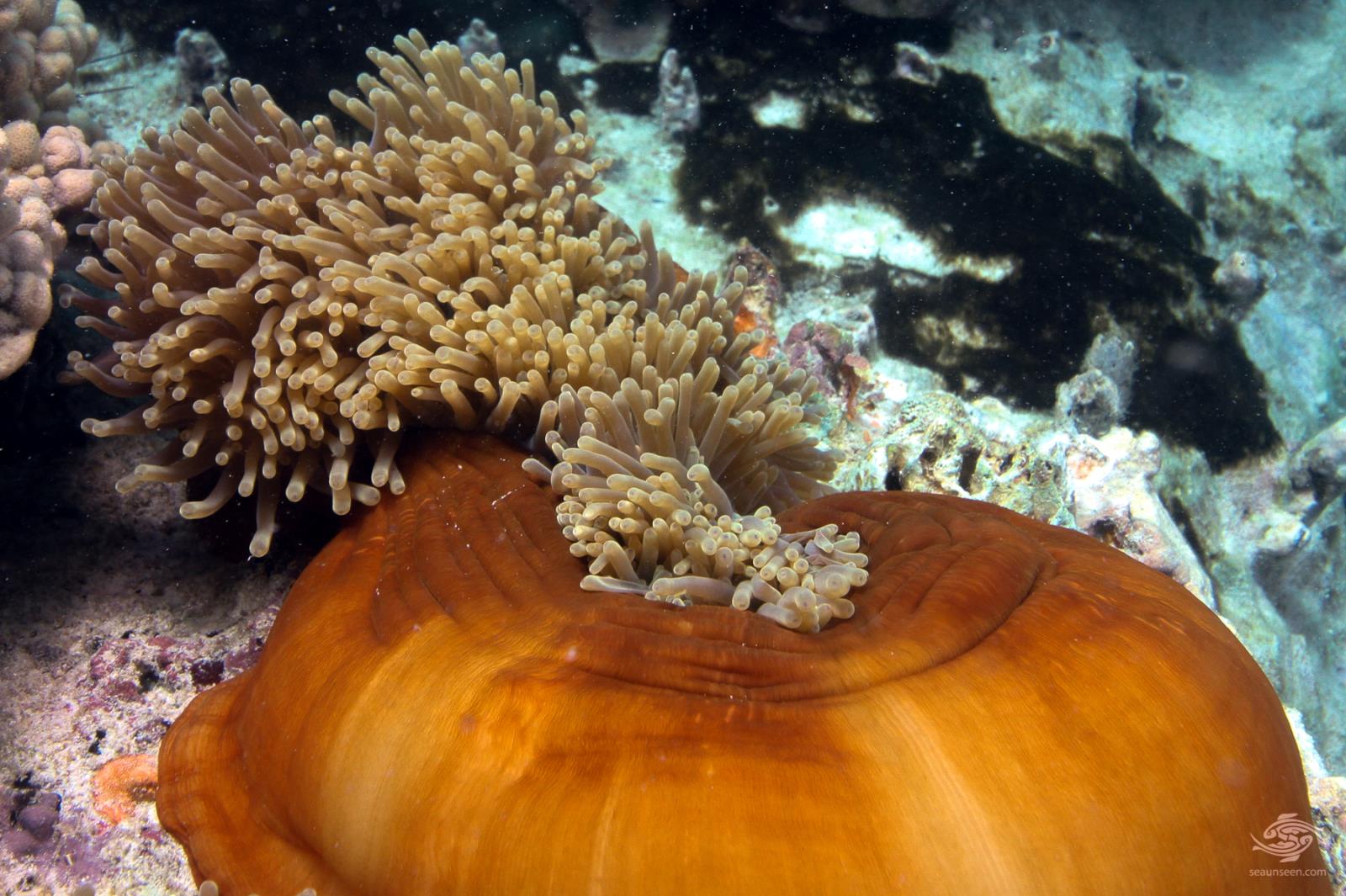 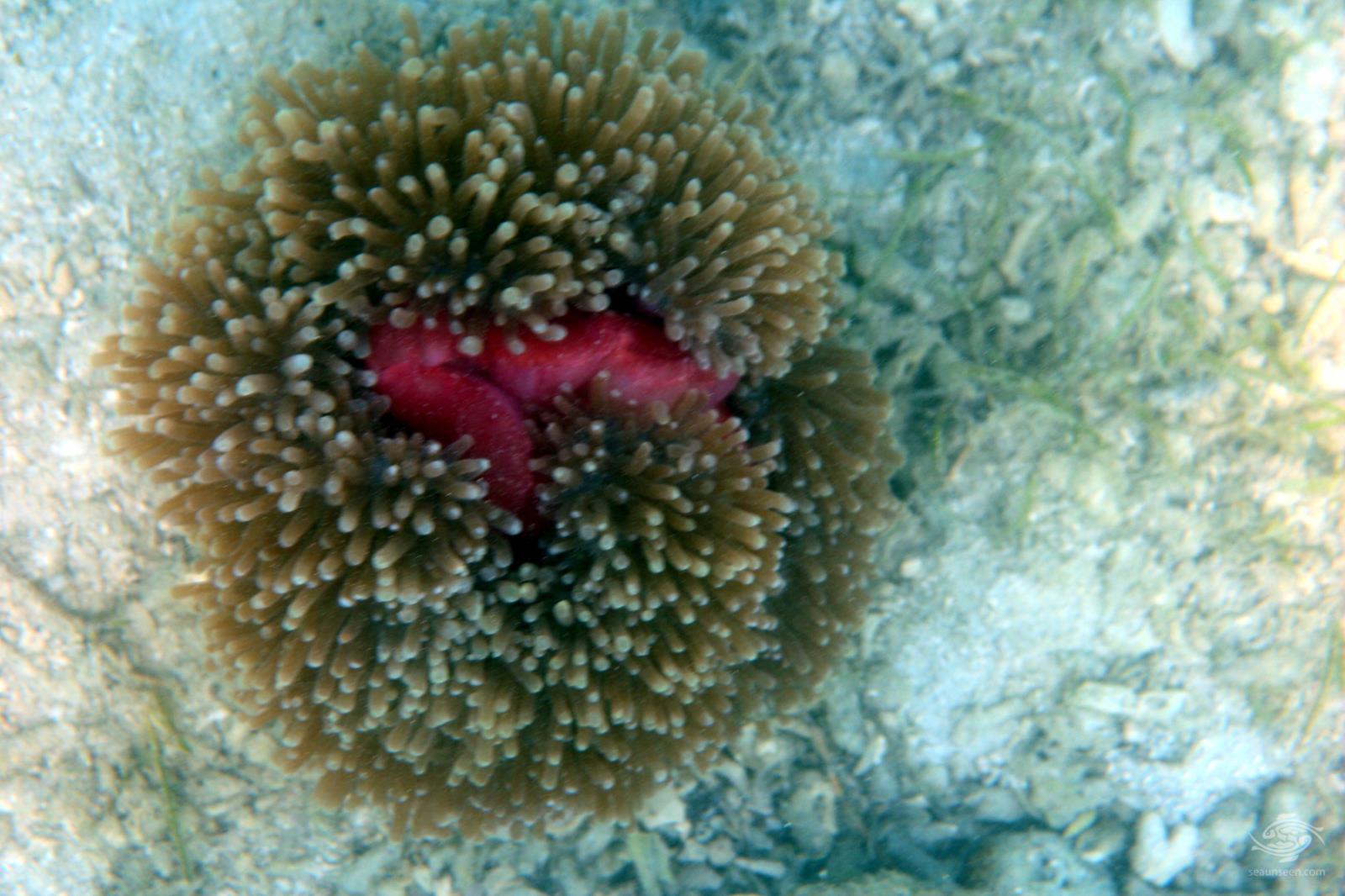