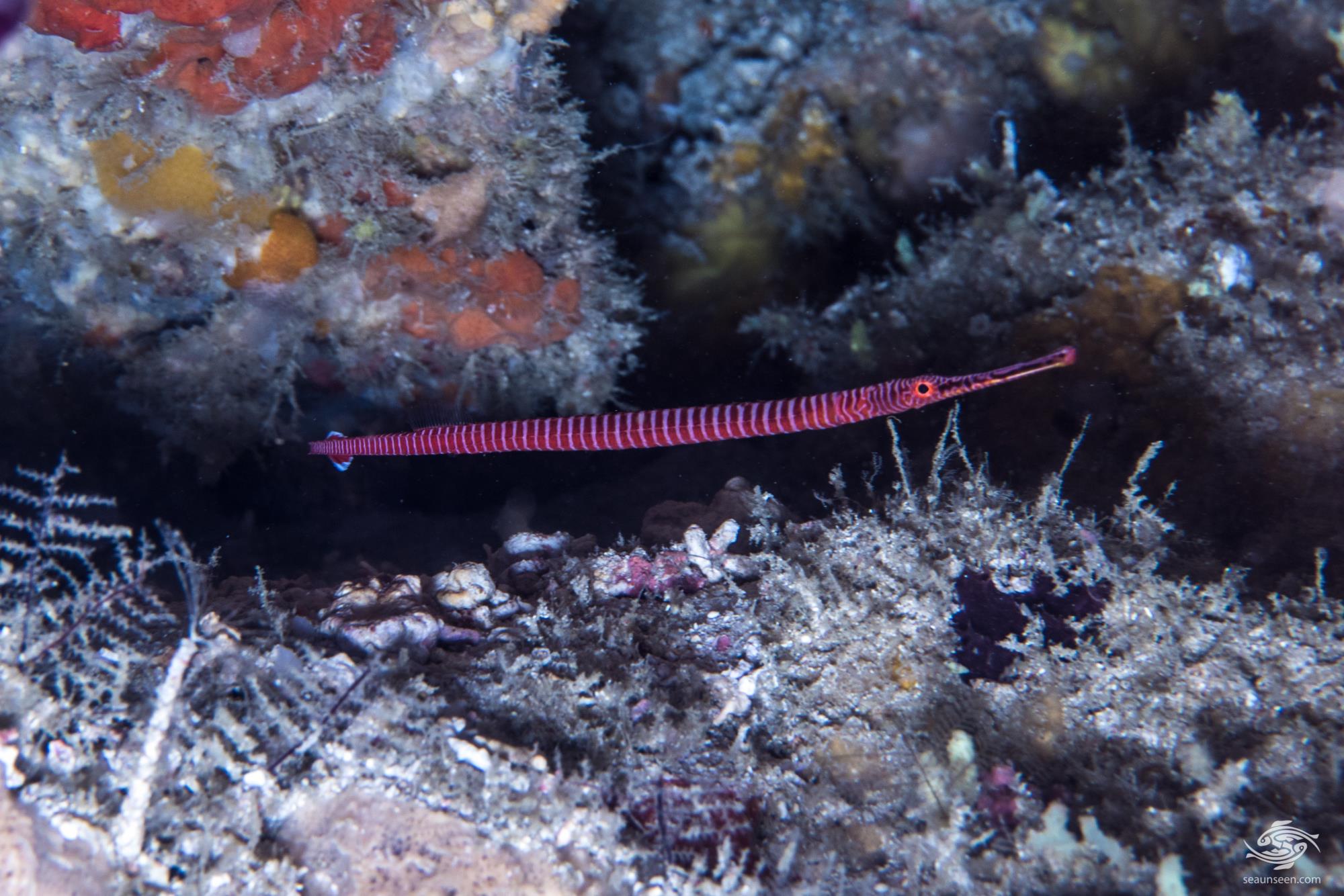 The Many-banded Pipefish (Dunckerocampus multiannulatus) is not commonly seen in Tanzanian waters, probably because they are mainly resident in small caves which are deep and they are fairly shy. They were first described by Regan in 1903 with the holotype being from Mauritius. 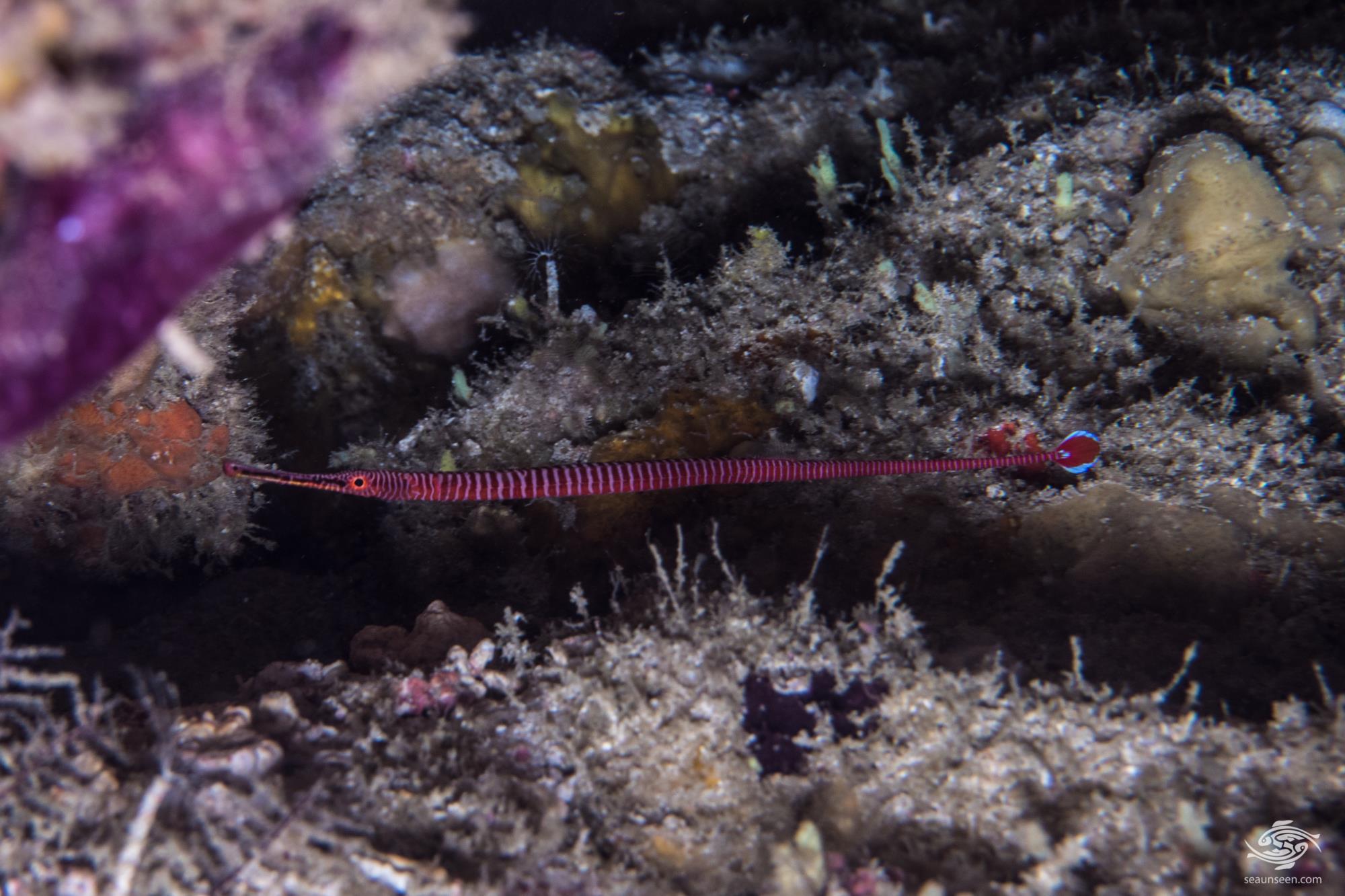 The Many-banded Pipefish has a long thin angular body comprised of armored plates. The body colour is red under bright lighting and there are numerous evenly spaced white bands circling the body.  Their eyes are proportionally large and the nose is long and is slightly tilted upwards.  What appears to be a male in the image below has yellow on the lower section of the mouth. 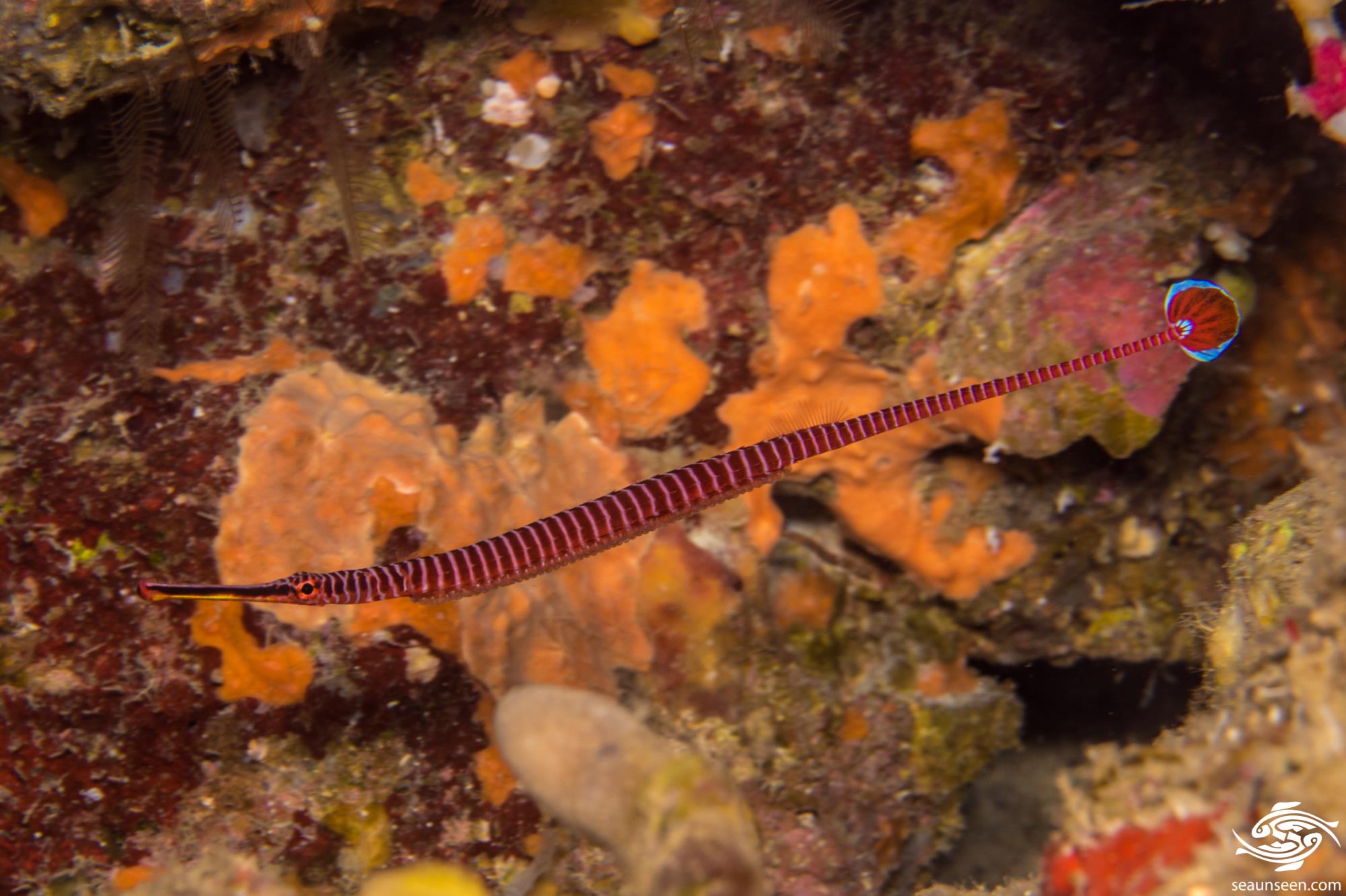 In the specimens we have viewed to date the caudal fin is red with light blue margins and with a blue spot.   Specimens from elsewhere have white and not blue on the tail. Possibly this is a regional color variation as in other respects externally they seem similar.  They are recorded up to 18 cm in length. 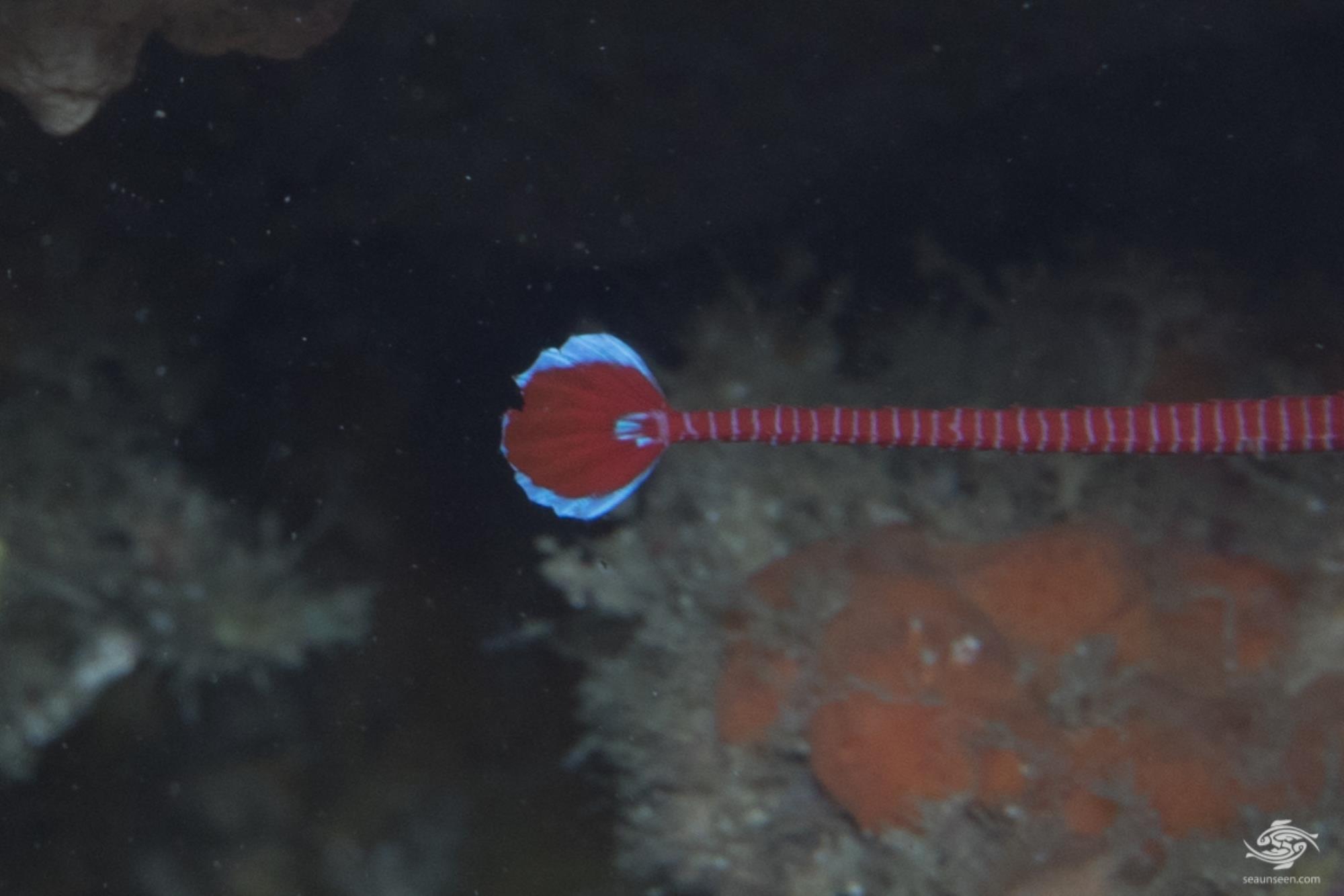 MANY-BANDED PIPEFISH IN THE WILD

Many-banded Pipefish are usually seen underneath overhangs or in small caves.  They are quite shy and one has to approach them slowly to get close for photographs. They have been recorded as swimming upside down but we have never seen them doing this.  They are active cleaners and are usually found in pairs. If one can get close to them and sit still and hold ones breath they become curious and come closer to inspect one.  When one exhales bubbles they tend to get a fright and go back into hiding. The trick is to slowly dribble bubbles out ones regulator and not to exhale too heavily. 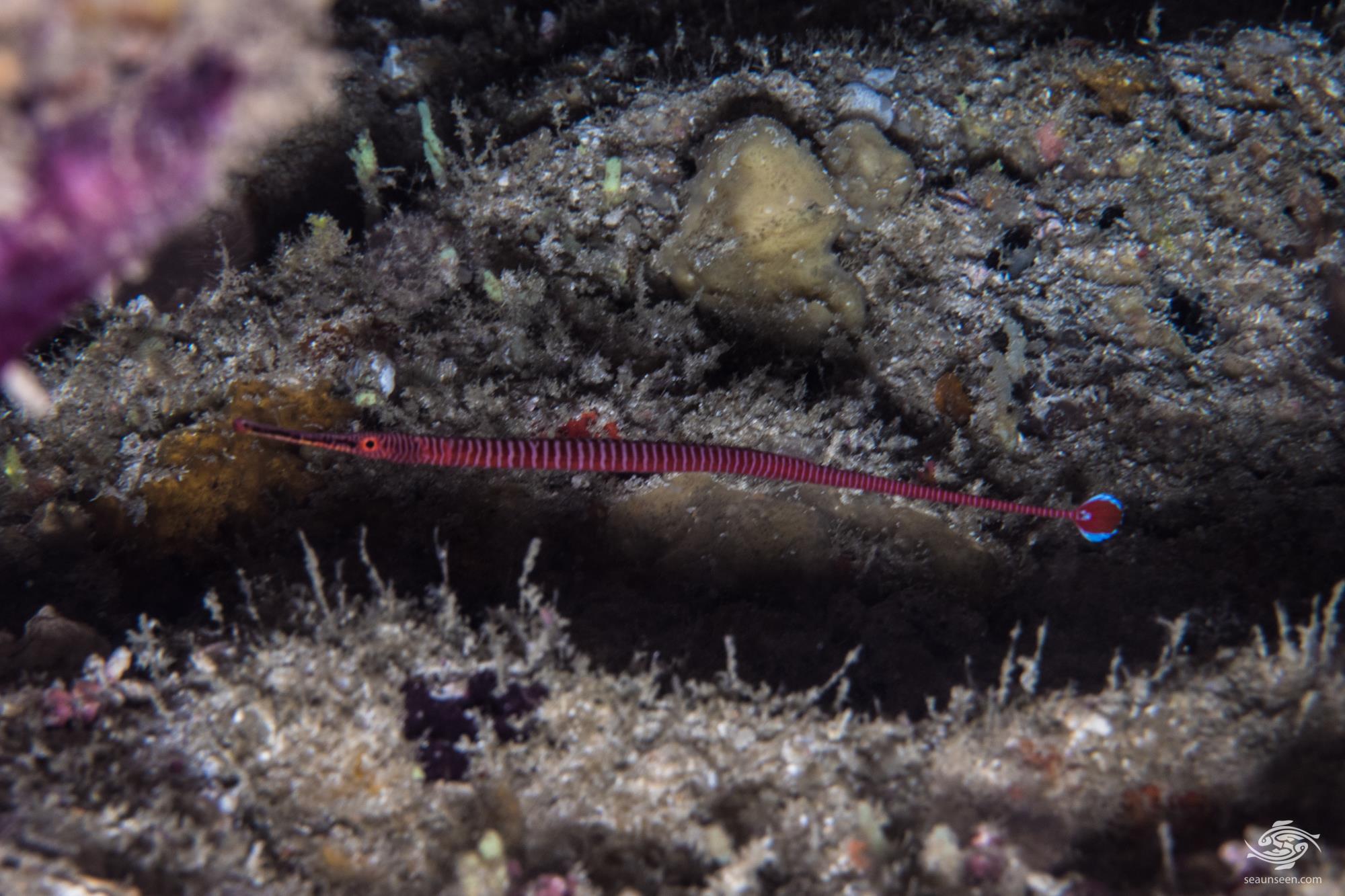 Many-banded Pipefish are found from South Africa, north up the East coast of Africa to the Red Sea  and across to the Andaman Islands and Sumatra in Indonesia.  They are found in small caves down to 44 meters but we have only seen them from 20 to 24 meters in depth. 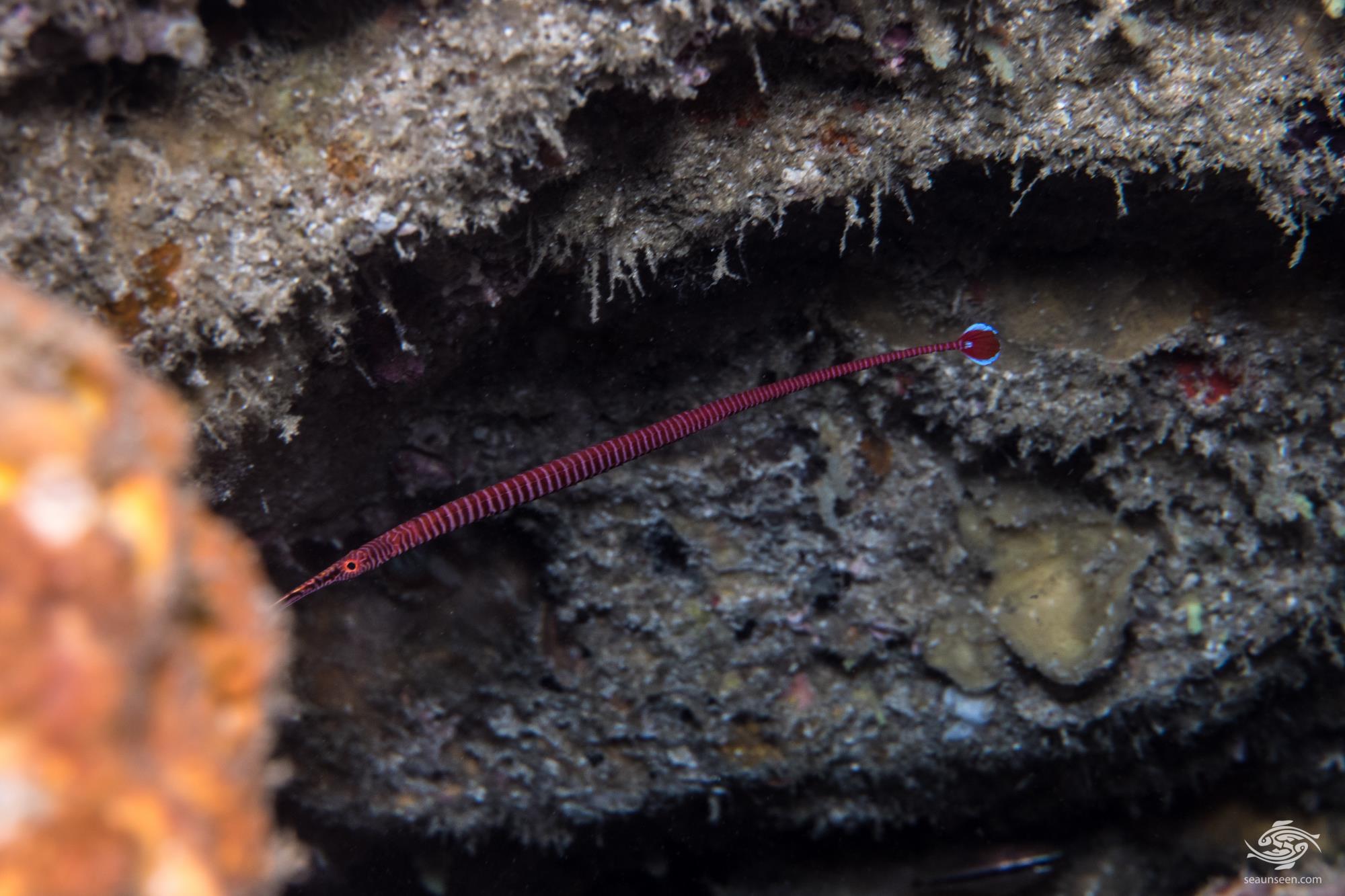 Many-banded Pipefish are active cleaners and feed on small crustaceans attached to their client fish. They do not set up cleaner stations outside the caves and tend to clean more cryptic species such as Cardinalfish and Eels. 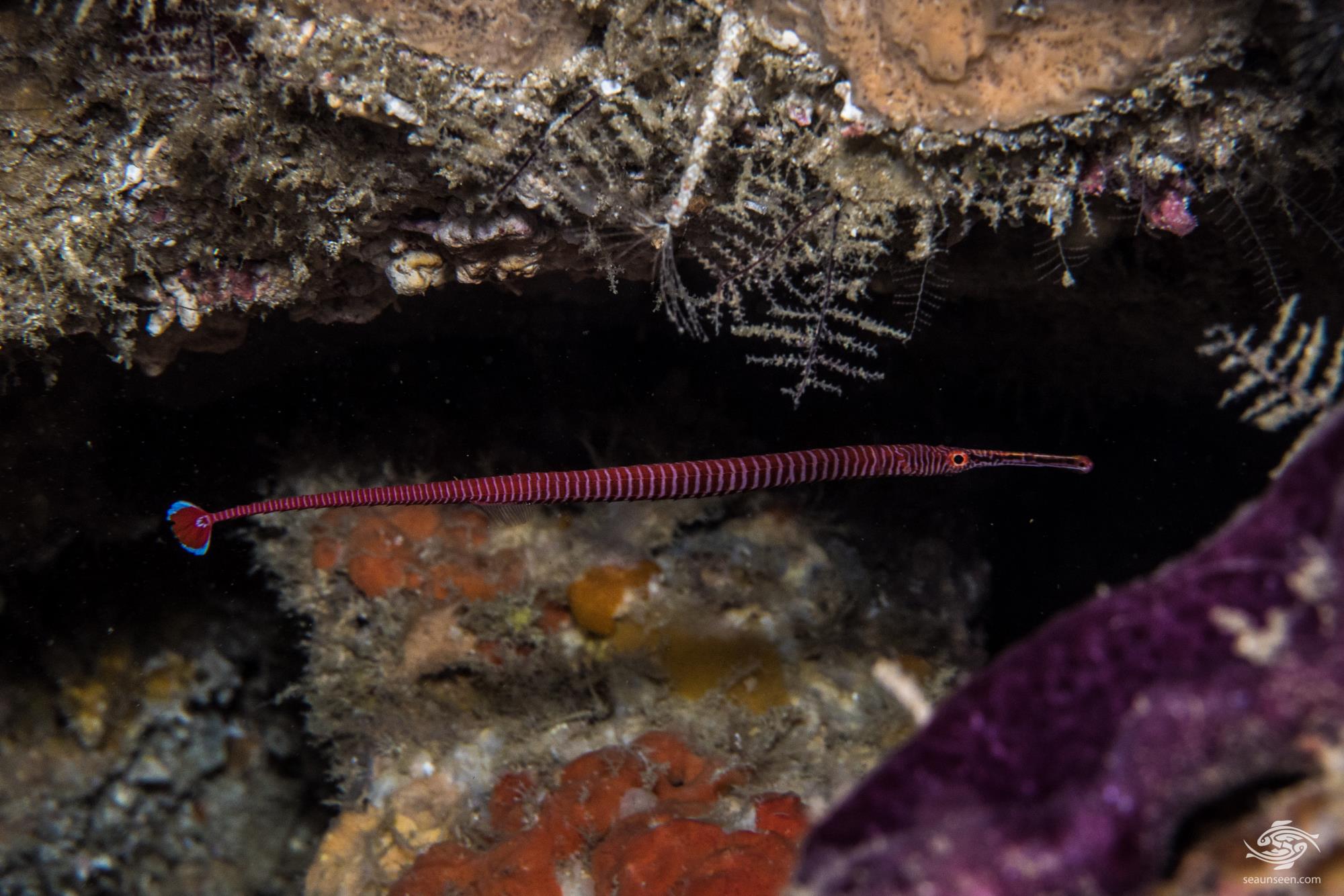 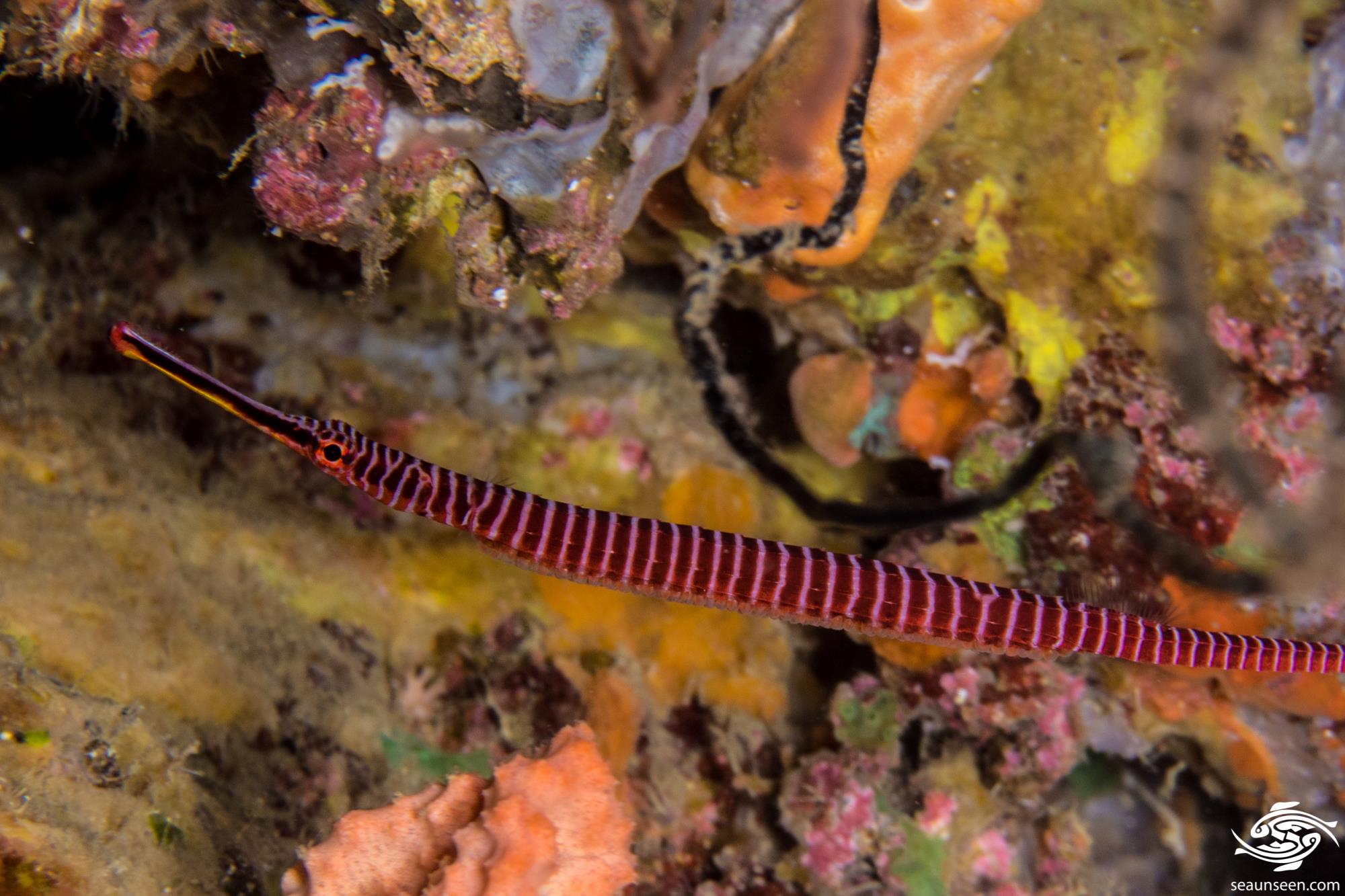 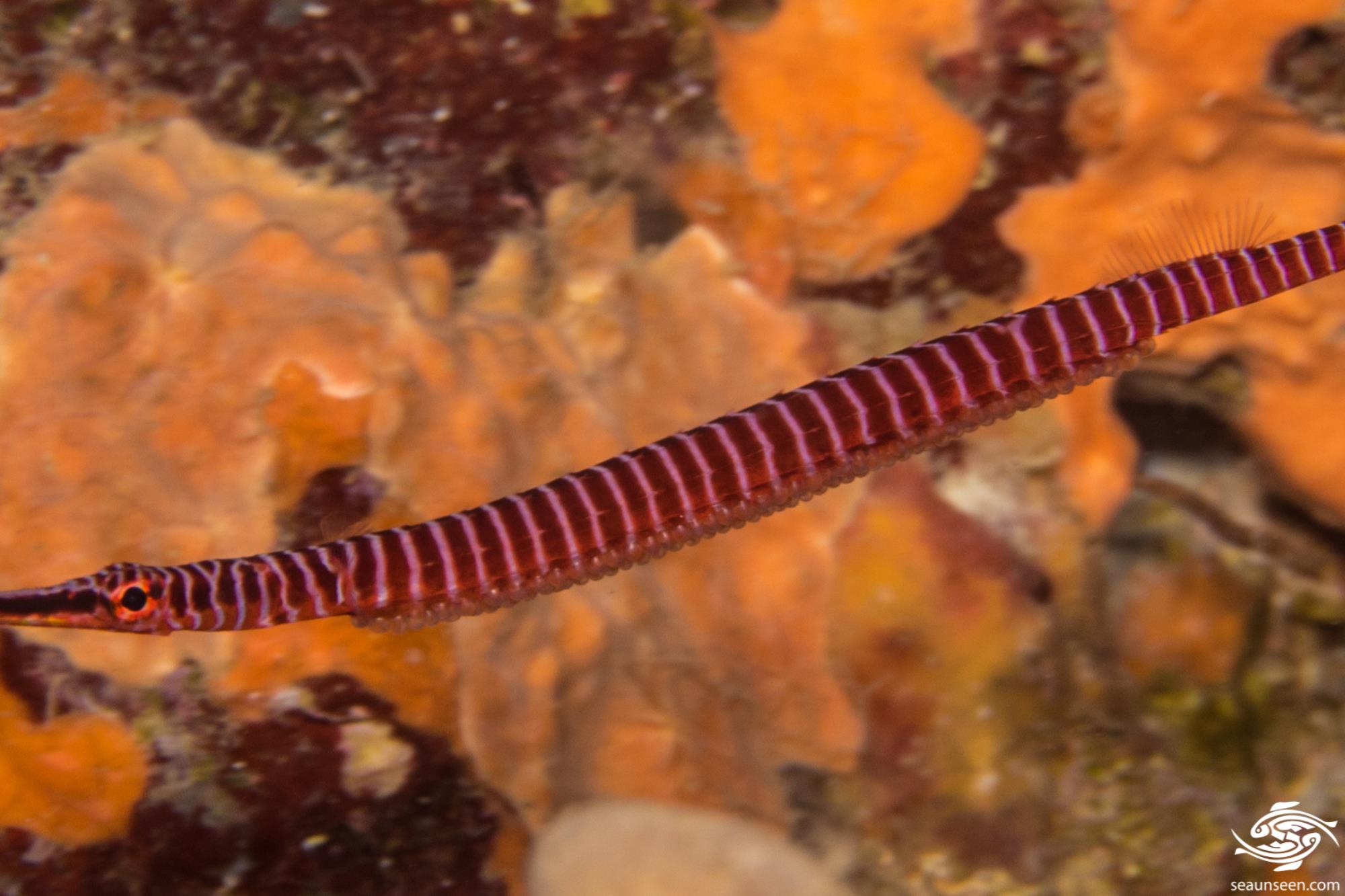 Possibly this species does not have a specialized brood pouch on the male. 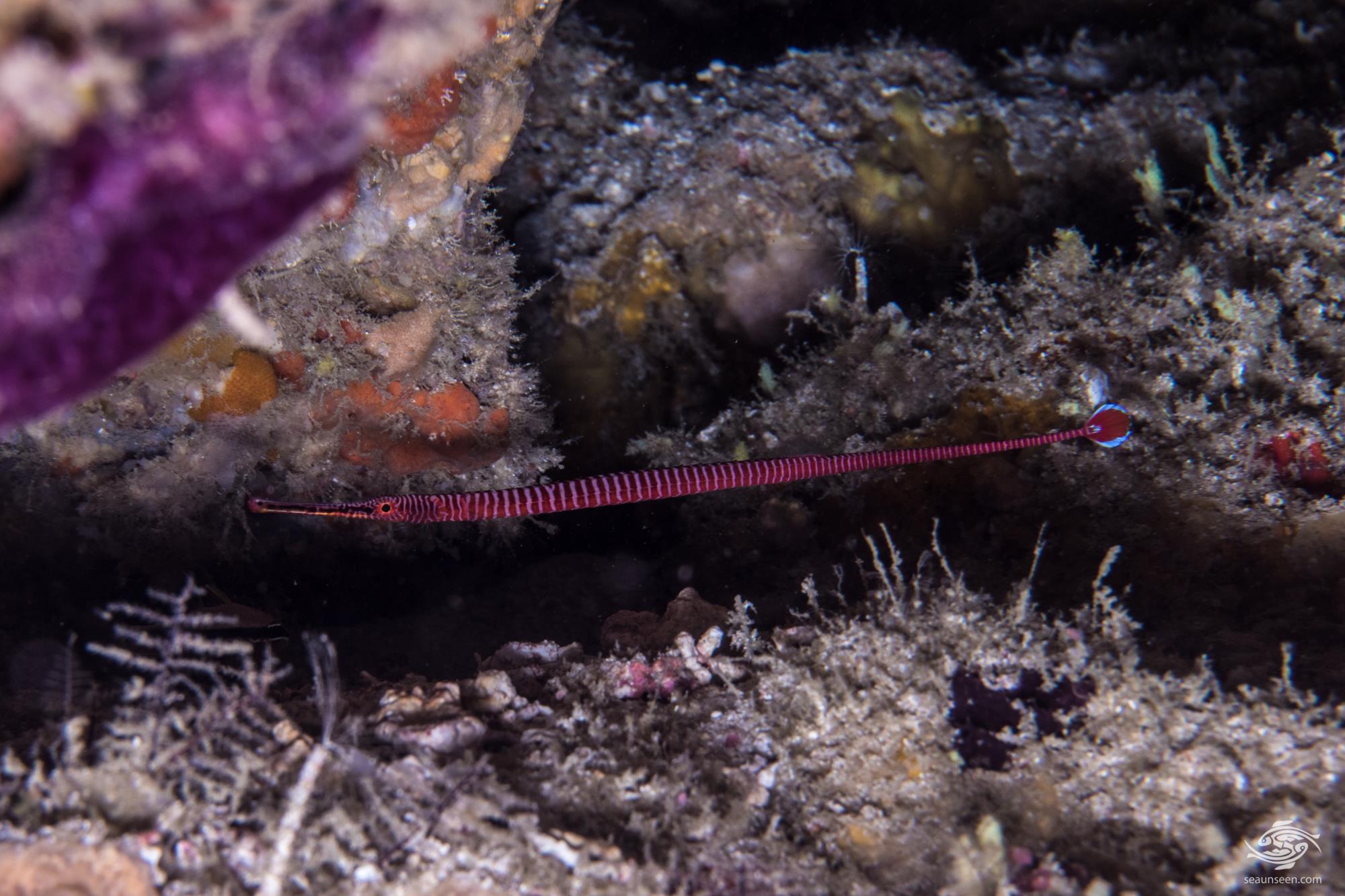 All pipefish are difficult to keep in the sense that they require live food, but for those that are cleaners perhaps the process is slightly easier provided one has sufficient fish in the tank to keep them supplied with food. There is a very good article on keeping pipefish here. Interestingly they have a long lifespan and five to ten years in a tank is not unknown.