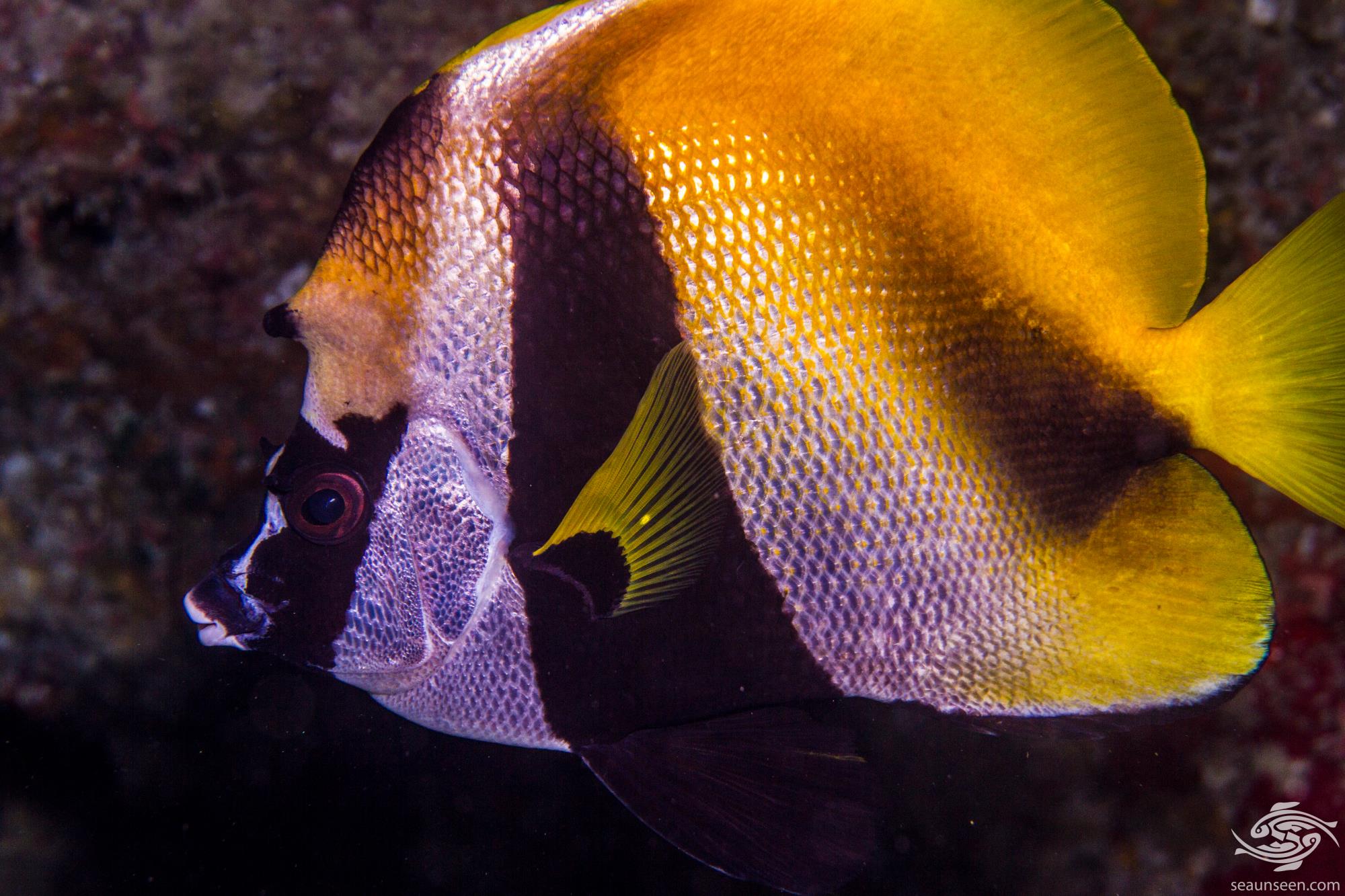 The Masked Bannerfish (Heniochus monoceros) , is also known as the Masked coachman or Unicorn Pennant Coralfish. They are not a commonly seen species and are fairly rare in Tanzanian waters. Bannerfish are close relatives of the butterfly fish, being in the same Family, Chaetodontidae. They obtain their name Bannerfish from their elongated dorsal fin.

Masked Bannerfish  have a white body with two black oblique bands, yellow dorsal, caudal, anal and pectoral fins. The first oblique band goes across the eye ending just above it, the second band is across the pectoral and pelvic fins and tapers up to just below the dorsal fin. The dorsal filament which is white, grows as the fish matures and trails behind the fish when it swims. On the rear of the body there is a yellow patch with a brown blotch on it that varies in size from specimen to specimen. Juveniles and adults are very similar to each other.

On the forehead there is a bump which is usually tipped in black and just on the inside of the eyes there are two small horns. The Masked Bannerfish can grow up to 24 cm in length and are attractive looking fish. 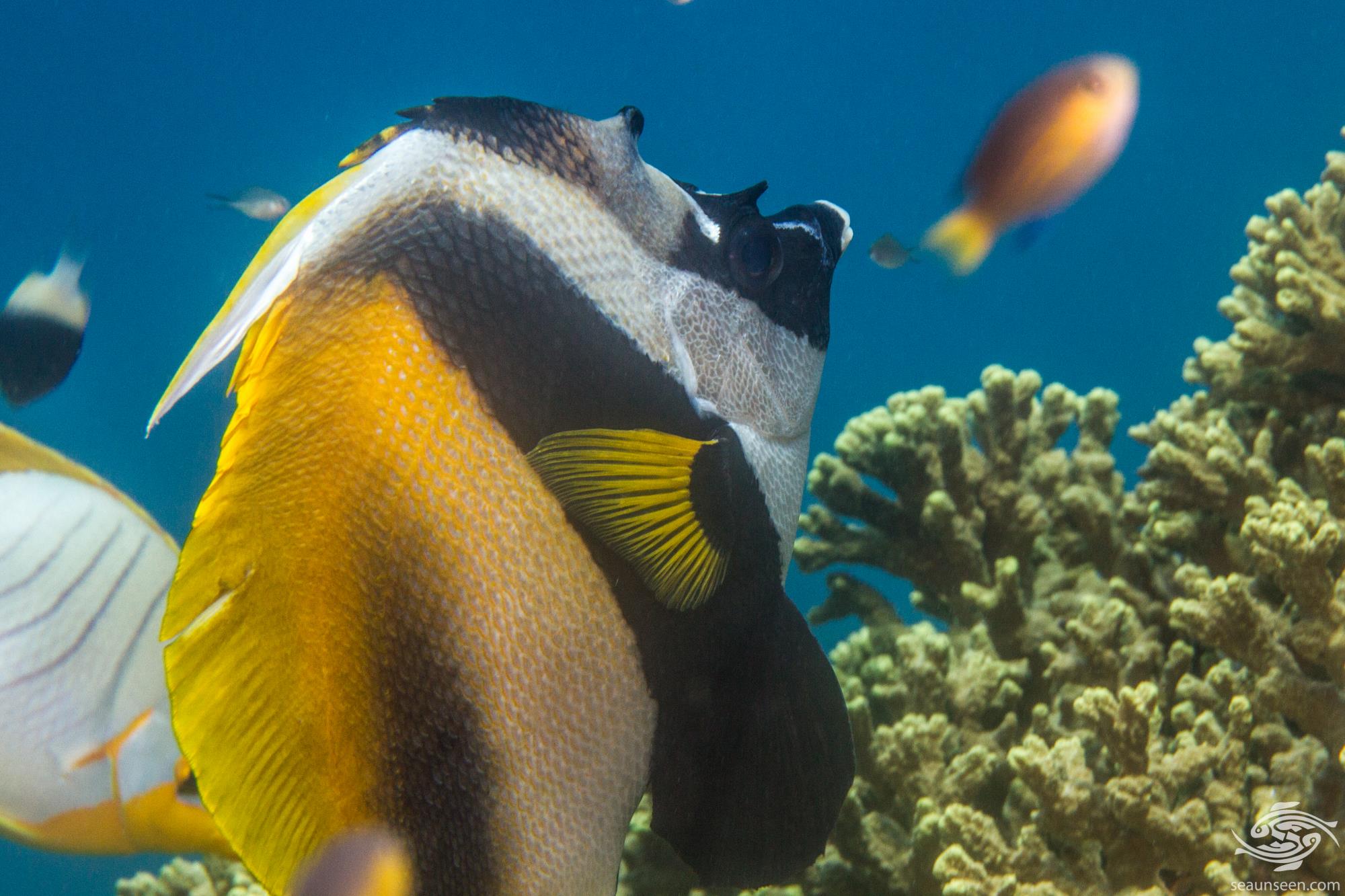 MASKED BANNERFISH IN THE WILD

Masked Bannerfish tend not to be as social as the other Heniochus species, more often than not being seen solitary or in pairs.  They are also more reclusive and are often seen hiding under corals rather than swimming in the open. Usually they are found below 15 meters and seldom venture into the shallows.  This behavior probably relates to their different diet, the other species are planktonic feeders whereas the Masked Bannerfish is a benthic feeder.

The Heniochus Genus  have been documented making use of acoustic behavior,  using muscular movements to twist the body and deforming the swim bladder to produce sounds. The sounds are thought to be used to defend territory. 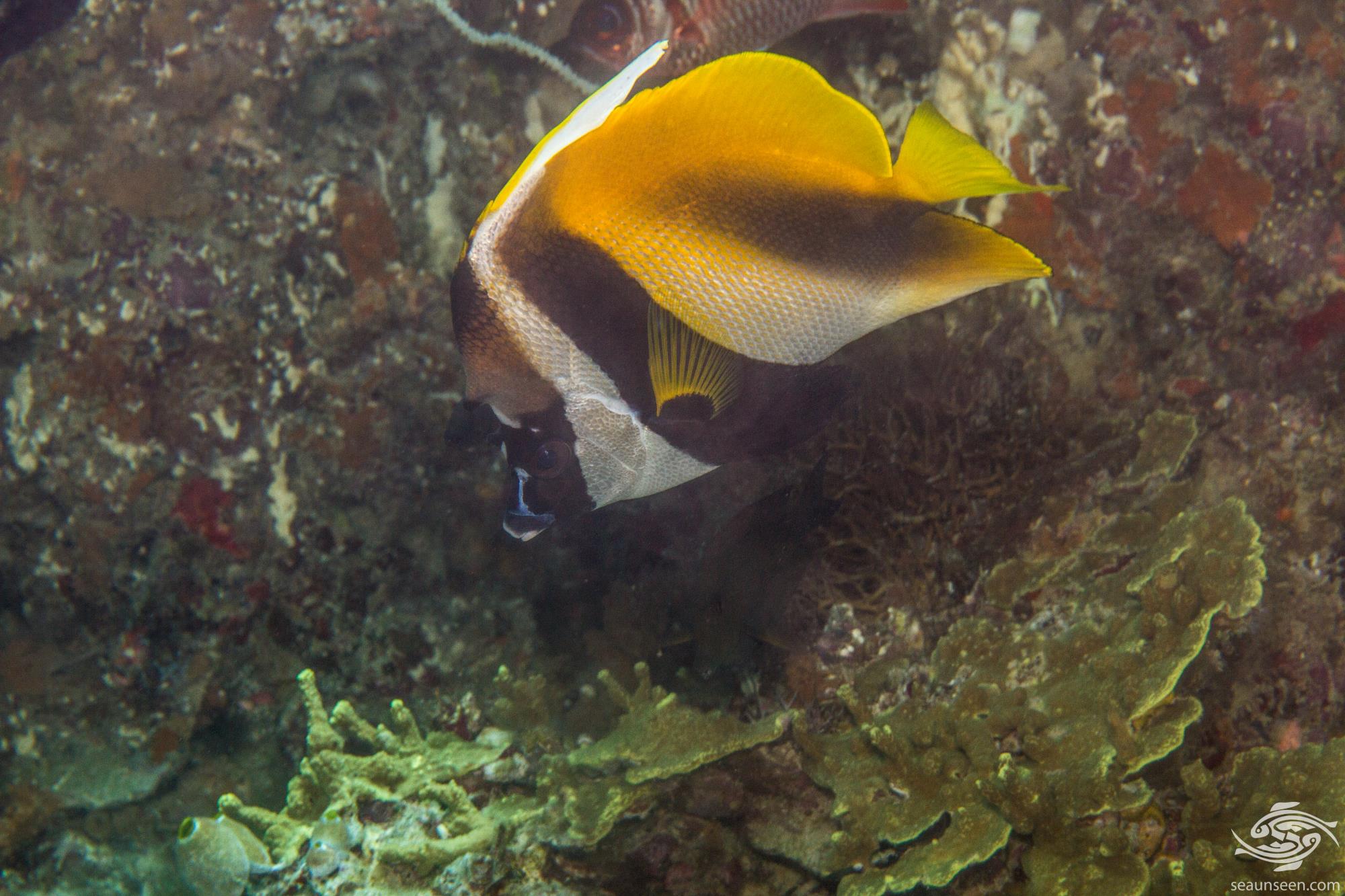 Masked bannerfish  are found on the East coast of Africa from south of Durban to the Red sea and eastwards to the mid Pacific . 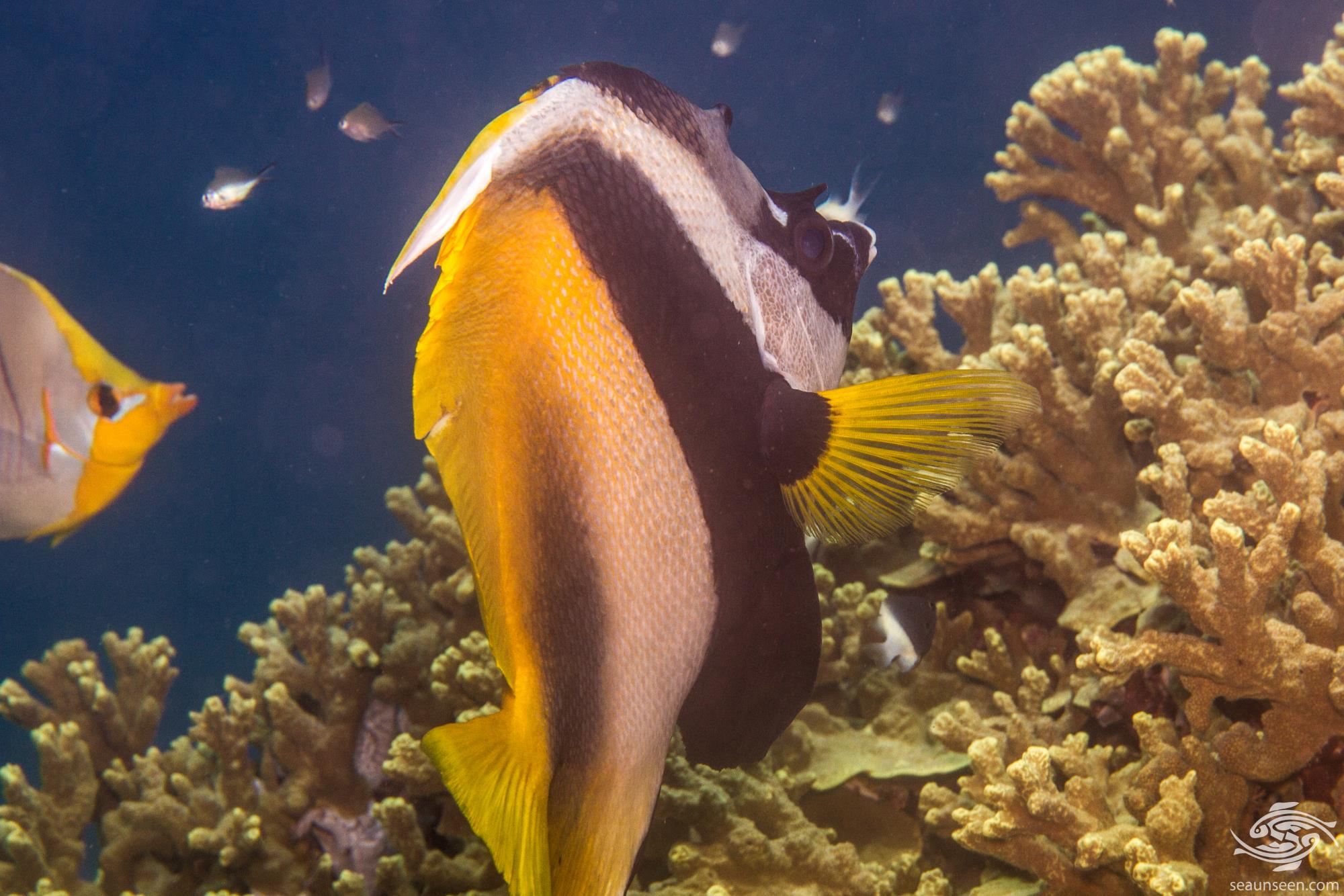 Masked bannerfish are thought to spawn seasonally in pairs and the eggs larvae and fry are thought to drift with the current before swimming to the bottom. The larval stage is extremely complex. 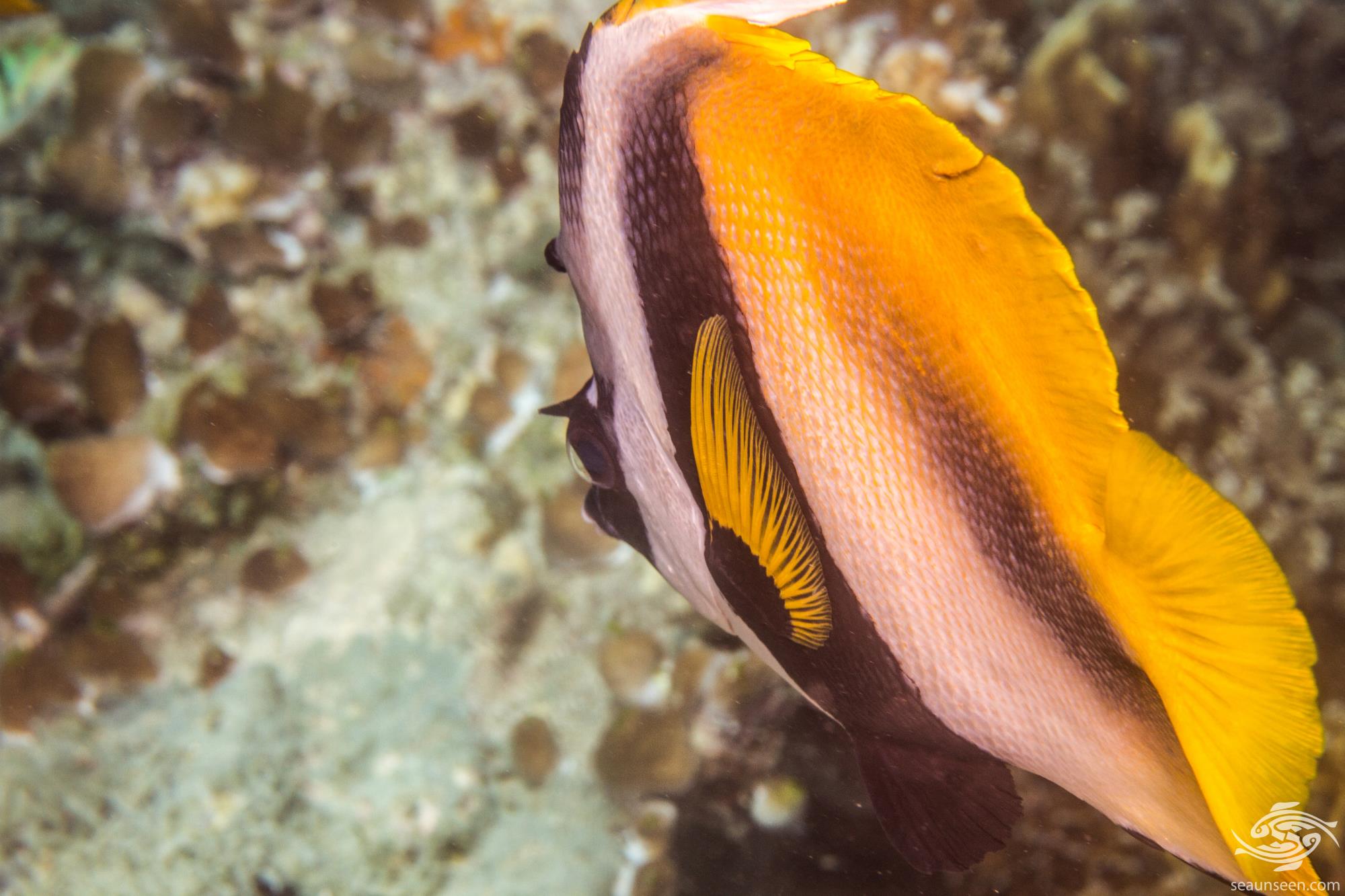 Because of their bright coloration these fish are sometimes kept in aquariums and are relatively hardy fish. They are suitable for intermediate level aquarists onward.

Because of the size they grow to, they need a relatively large tank with overhangs and caves to hide in. Other aggressive fish species may bully them. They are not reef safe and will nibble on invertebrates. 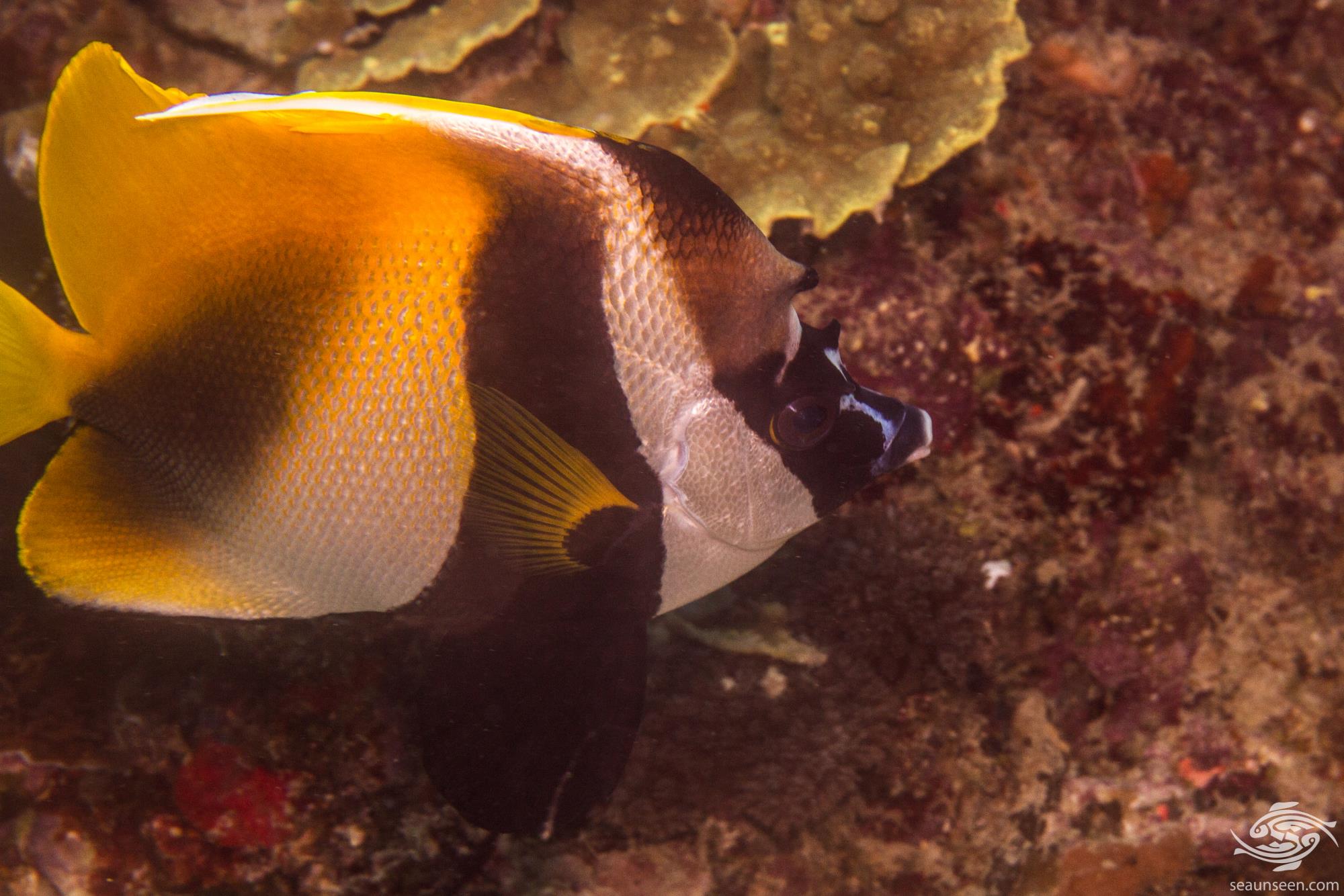