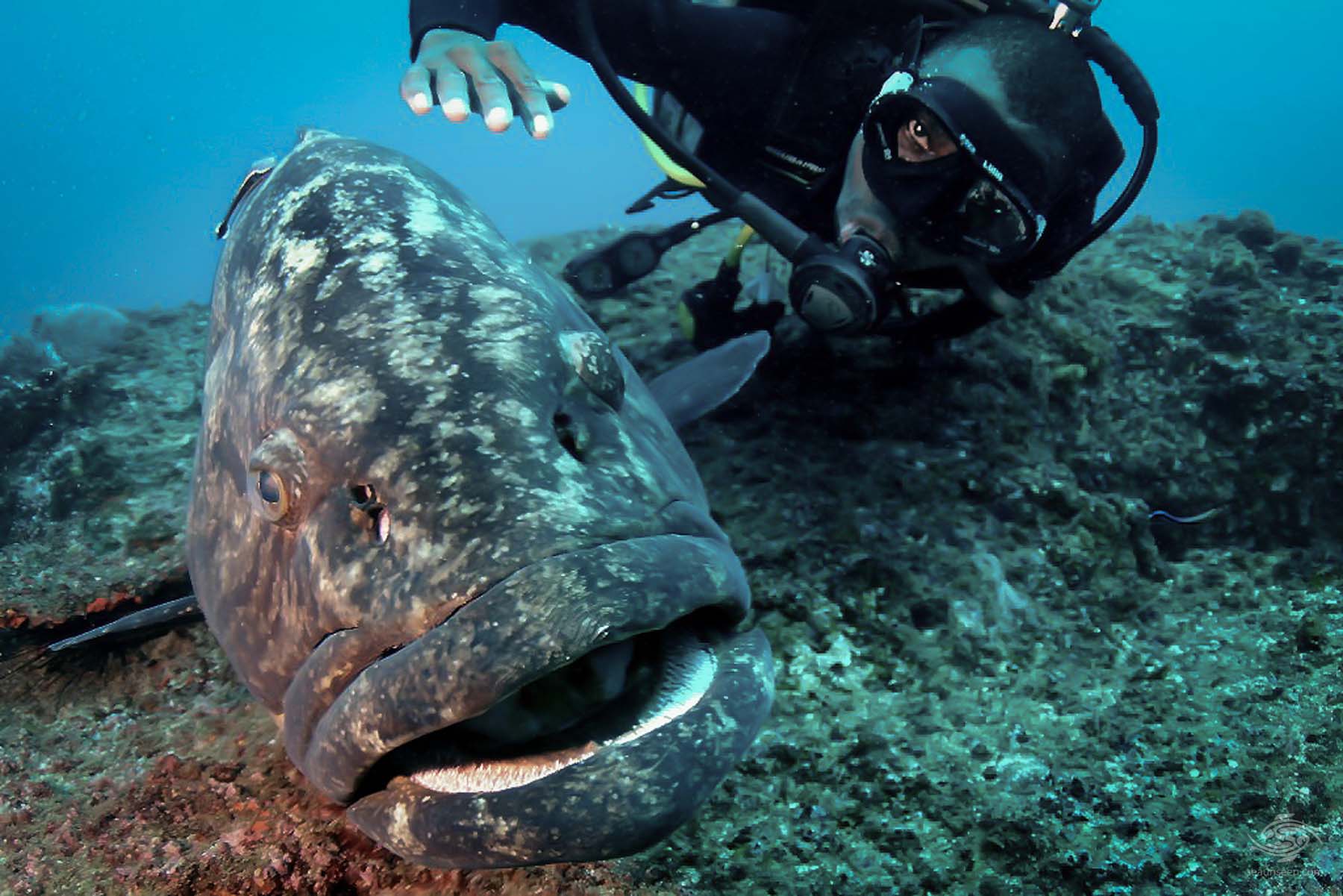 A massive Potato Bass (Epinephelus tukula) which is habituated to human contact allows a scuba diver to approach in close proximity. Larger Potato bass are becoming increasingly rarer due to the fact that they are highly territorial and are always found in the same area making them easy prey for fishermen and unscrupulous spear fishermen. They can be dangerous to divers if provoked but as a rule tend to be very passive. They should be approached with some caution unless the fish is well known to the diver. 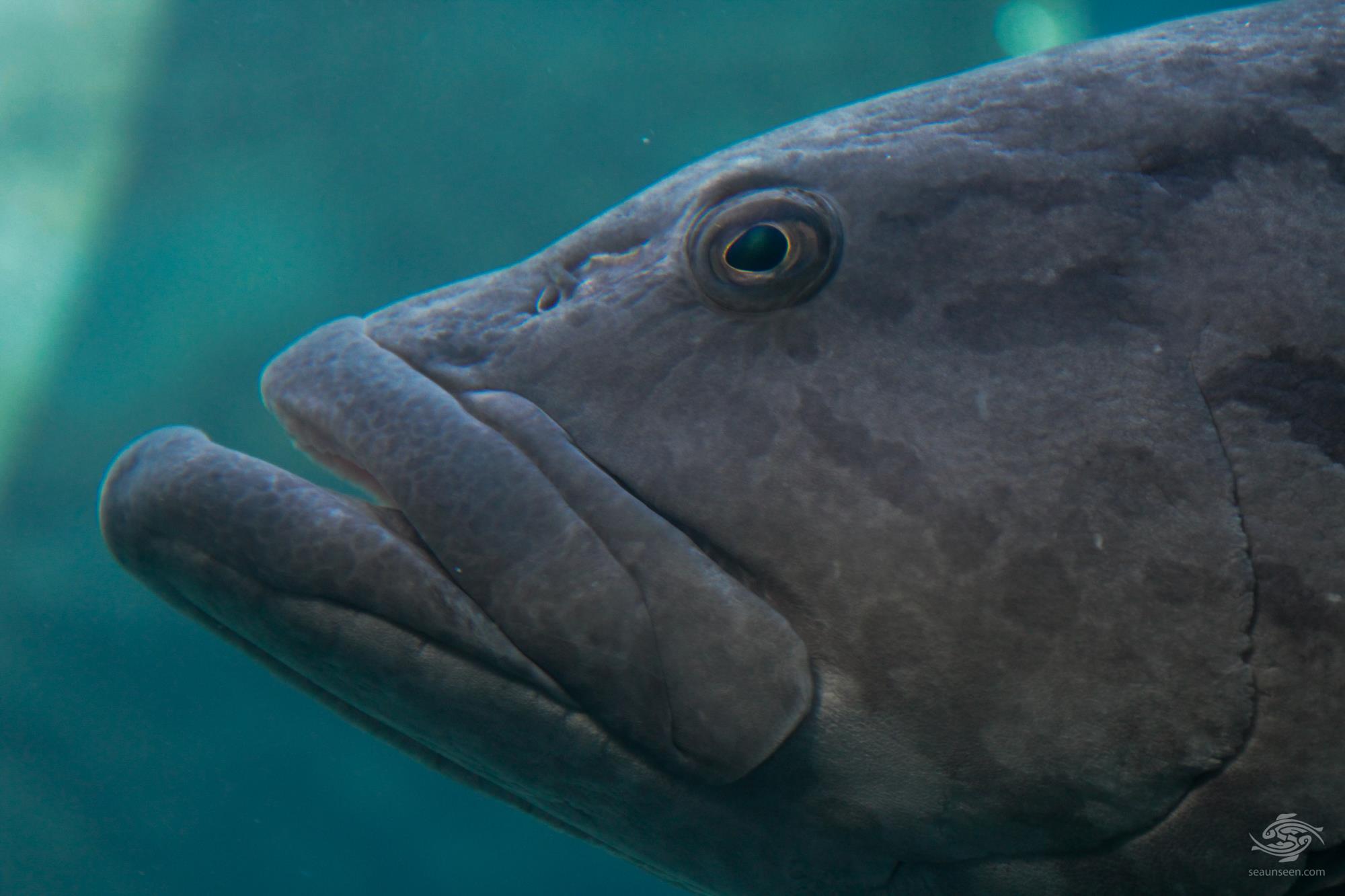 The Potato bass, Epinephelus tukula also known as the potato cod or potato grouper is one of the larger members of the cod family.The potato bass is an elongate and very robust fish with a very large mouth.The background color is light grey with large brown potato shaped blotches, hence its name. There are smaller blotches on the head. They have the ability to darken or lighten their coloring depending on their mood. They can grow up to two meters in length and weigh up to 100 Kg. Inside the mouth as can be seen in the image above they have plates of teeth that are used to grip prey.

They are often curious and when divers approach them will sometimes swim up to them for a closer look. Most times though they will stay a distance away though. Sometimes they will swim towards divers with their mouth open as in the video below. Its probably a good idea to keep ones distance from them if they are doing this. They are territorial and may consider the diver as an invader. They are highly territorial and are seen singly and in small groups of up to five. They have a habit of tampering with the catch of spear fishermen. They are one of the most dominant predators on a reef, giving way only to the larger Giant grouper Epinephelus lanceolatus.

This species is widely distributed along the Indo-Pacific region.They are associated with reefs,both coral and rocky. The juveniles are found close inshore and the adults are found from depths of 10 meters down to 150 meters. 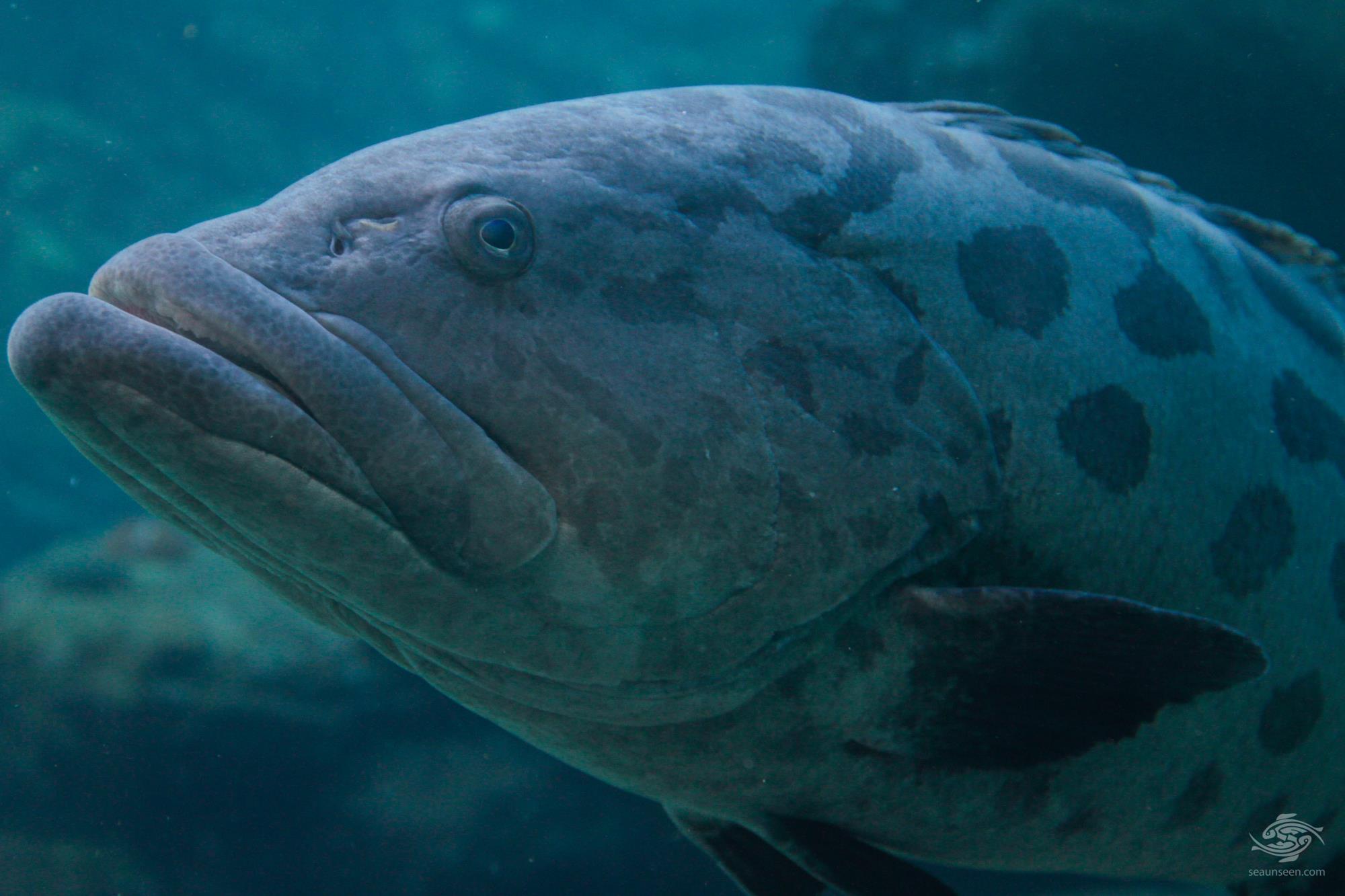 Potato bass reach sexual maturity at around 90cm in size. This slow growth makes the species fairly vulnerable and in heavily fished areas it is easy for a breeding population to be fished out. Very little is known of their breeding habits. They have been observed performing a breeding dance, where a pair rub up against each other while swimming in circles. The eggs are then released into the water and the males fertilises them.

The Potato bass is an aggressive ambush predator and will hover silently and then do short fast darts at its prey. Any fish or crustacean that fits in its large mouth is fair game.

Although listed as of least concern, their slow growth rates make them vulnerable to over exploitation. Their curious nature and habit of eating anything that fits in their mouth makes them a relatively easy catch and this along with their size and trophy status means they are often targeted by fishermen. Habitat loss and damage caused by pollution and development are additional threats.