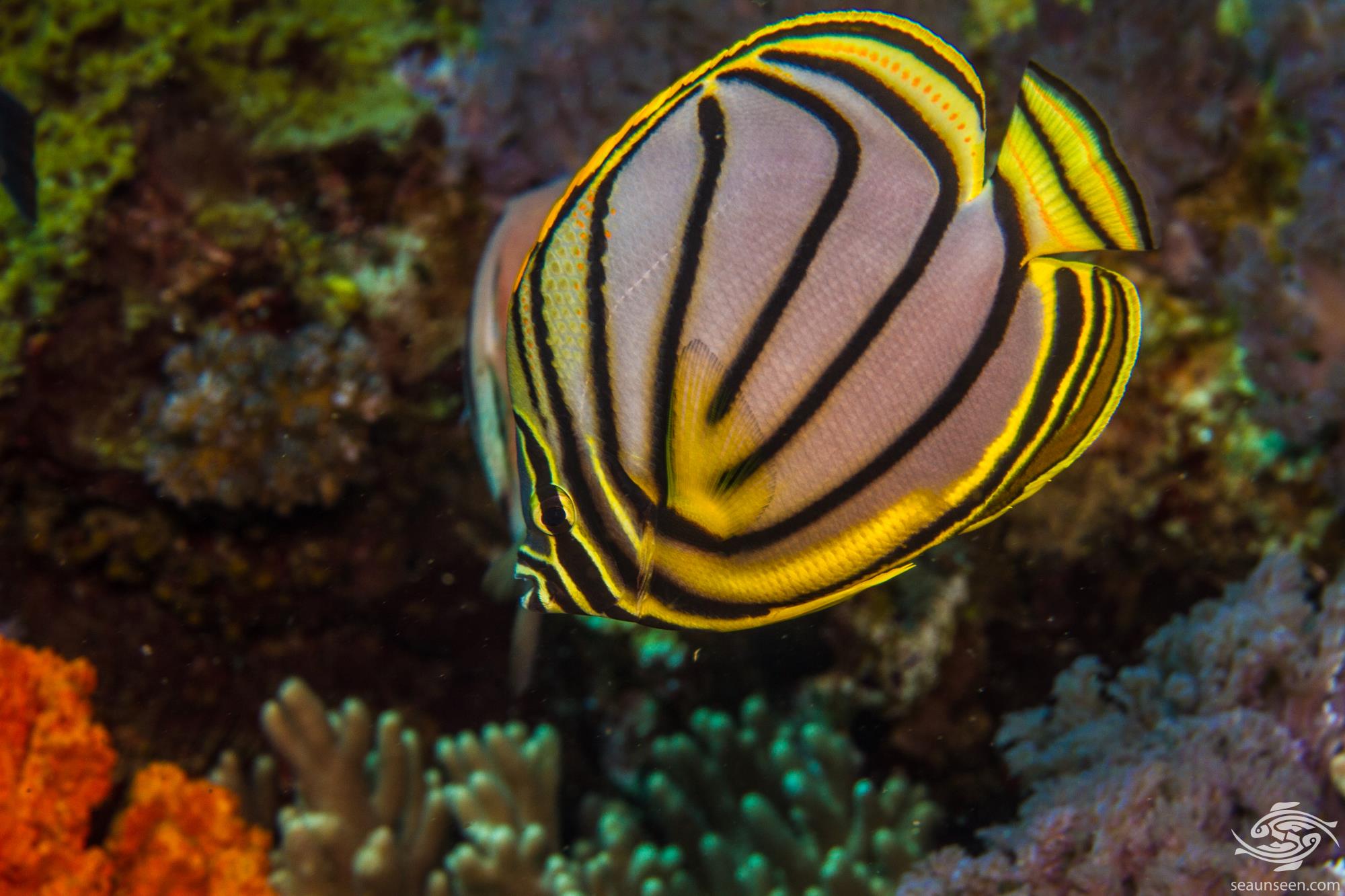 Meyer’s Butterflyfish (Chaetodon meyeri) is also known as the Maypole Butterflyfish and the Scrawled Butterflyfish. They are not common in Tanzanian coastal waters and not commonly seen. This probably has something to do with their relatively shy nature as they tend to avoid divers unless there is good cover close by. 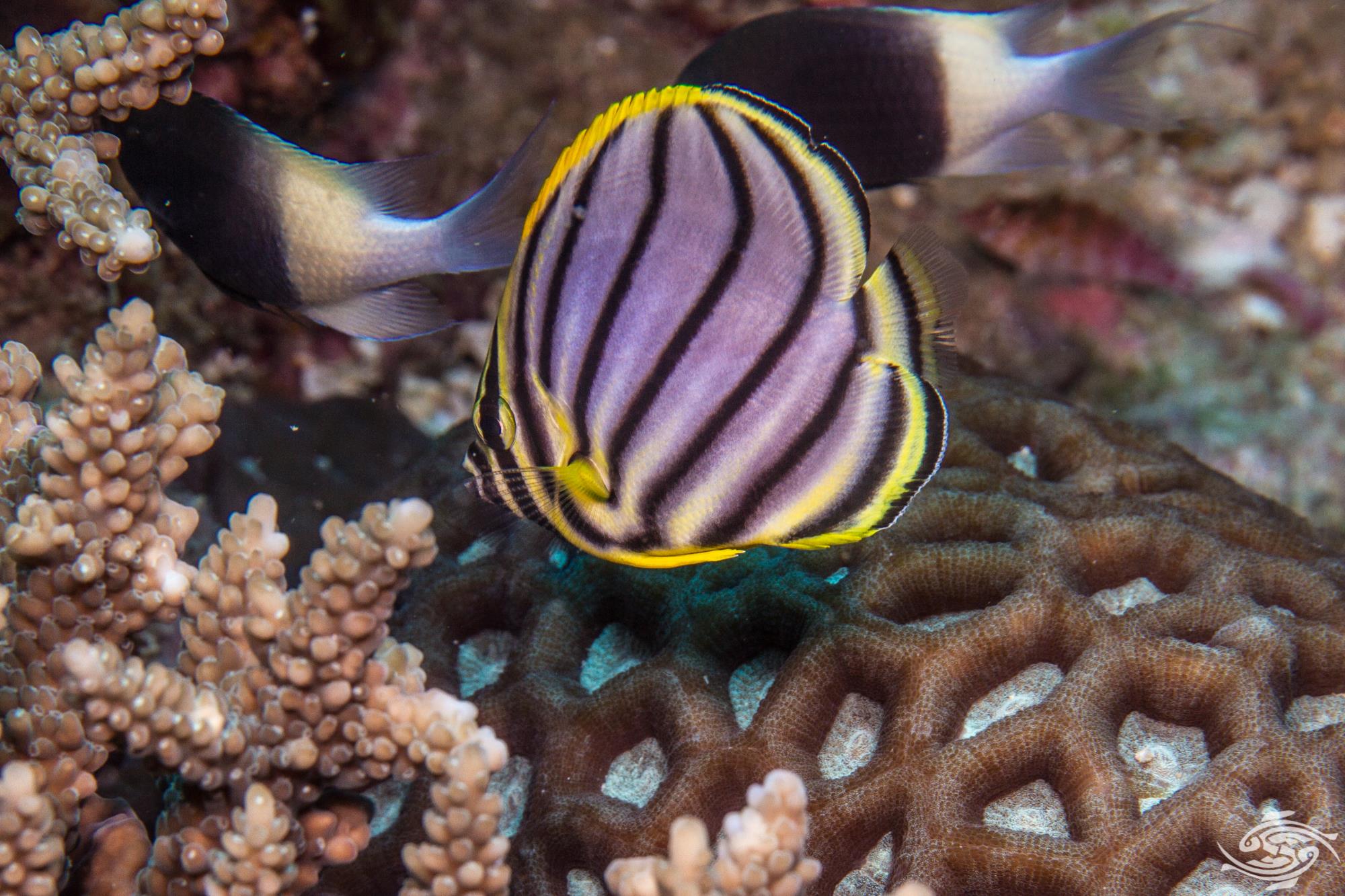 The body of the Meyer’s butterflyfish is oval and laterally compressed as with all Butterflyfish. The juveniles as seen above have a less complex coloration than the adults as seen below. The body has an overall white color and a series of fairly thick vertical black lines run down the mouth and facial area running through the eye. A curved black line runs across the gill plate and around the body going just short of the caudal fin. Behind the gills a series of lines curve upwards. On the adults the fins are a bright yellow with a dotted orange line on the rear of the dorsal fin. Some specimens have more orange dots just above the gill plates.

They have a short fairly rounded snout and grow to between 15 to 17 cm in length. It is impossible to sex them from their looks. 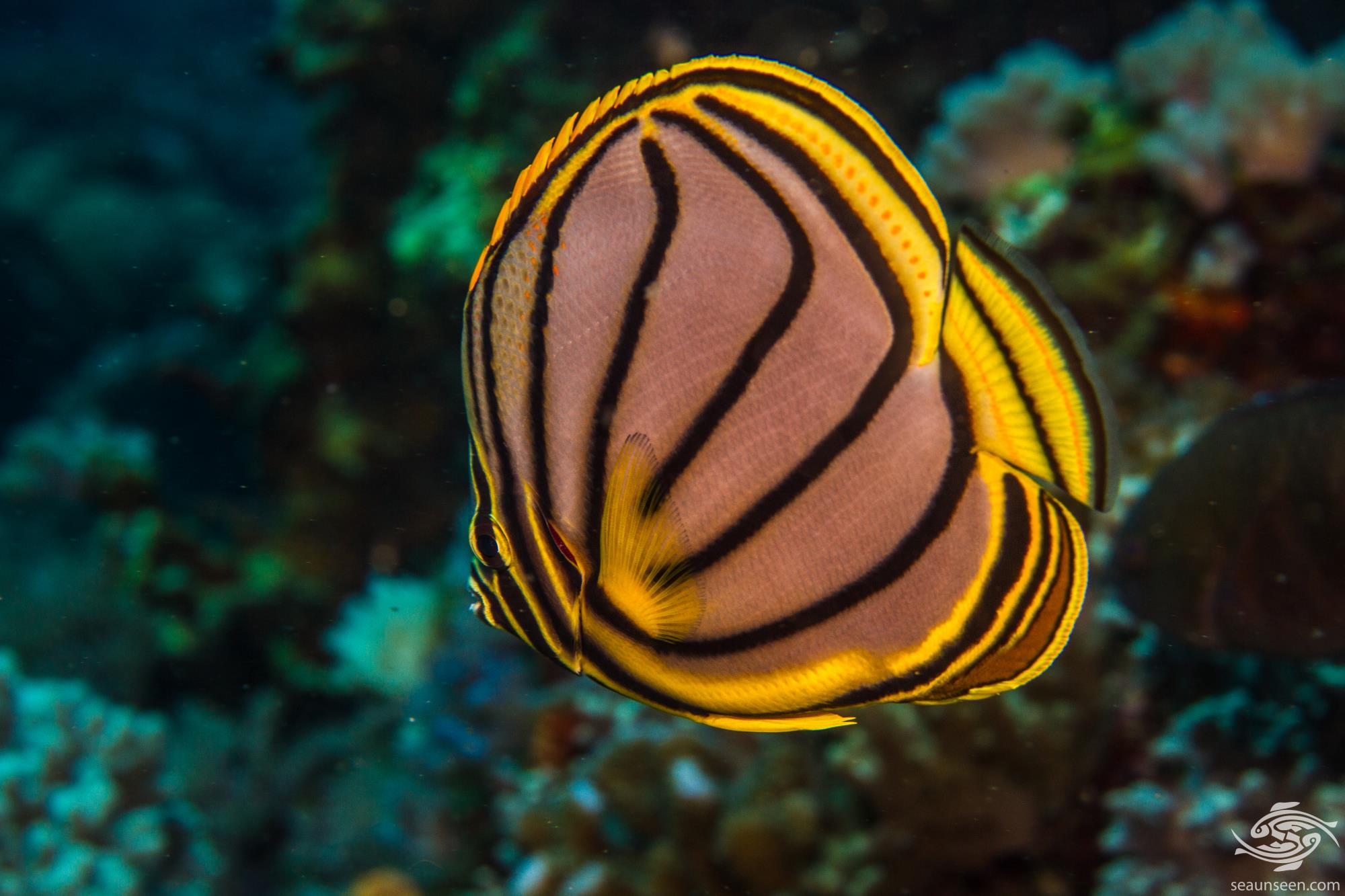 MEYER’S BUTTERFLYFISH IN THE WILD

Juvenile Meyer’s butterflyfish in Tanzania are usually seen singularly close to branching corals. They are quick to go into hiding and are fairly difficult to photograph. The adults are occasionally seen on open reefs with good growths of coral. Adults tend to mainly be in pairs and feed by themselves rather than joining up with other species of butterflyfish. They are reclusive and go into hiding if they think they are being followed. They can be annoyingly difficult to photograph well because of their shy nature. 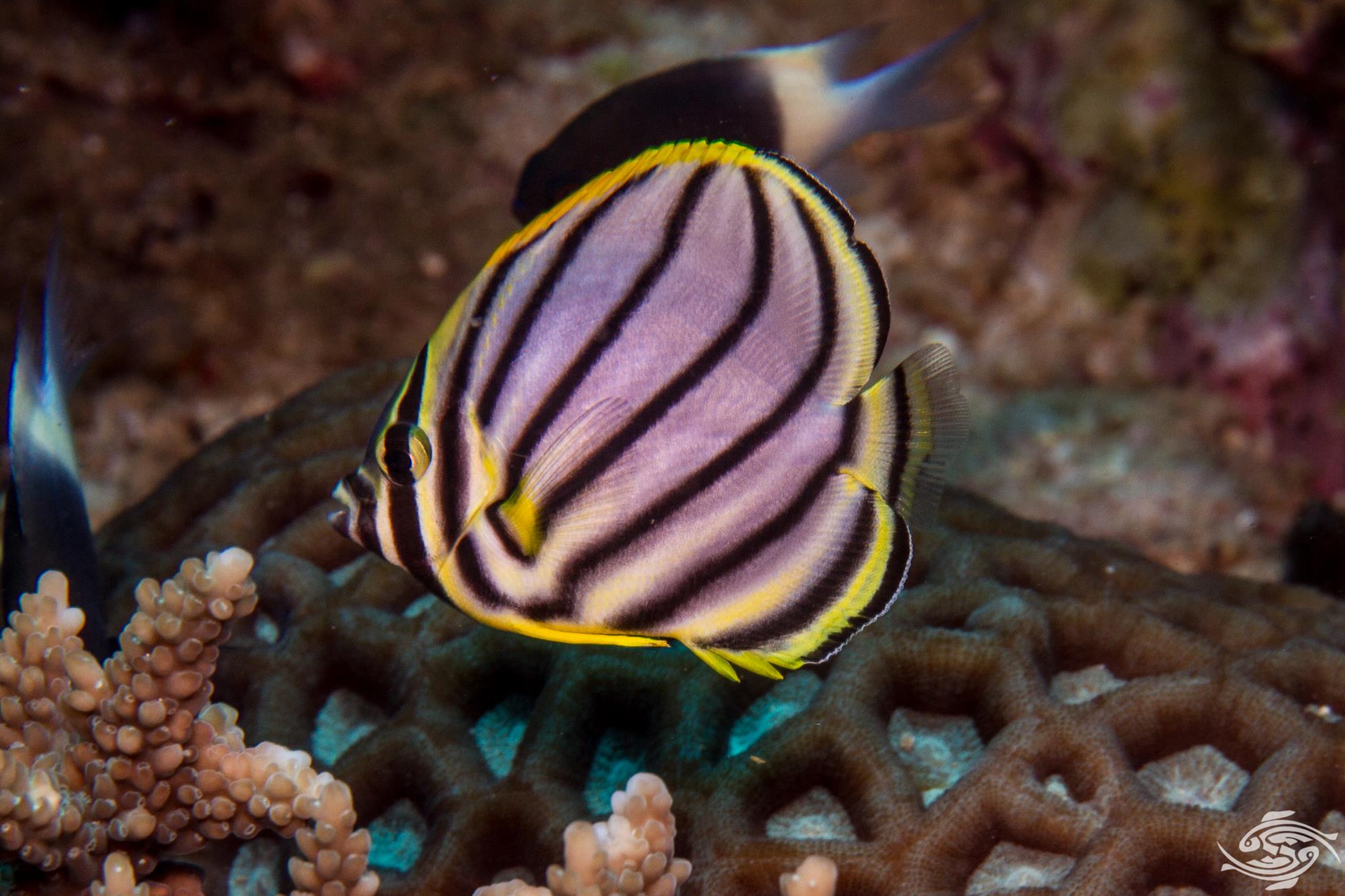 Meyer’s butterflyfish are found from from Durban in South Africa, northwards up the African coast to the Red Sea and across the Indo Pacific area up to Japan in the north and to the south of Australia, across to Hawaii . They have also been found in the Galapagos Islands and in the Revillagigedo Islands (Mexico). They have been found from depths of 2 to 30 meters. In Tanzania they seem more common from depths of 12 to 18 meters. 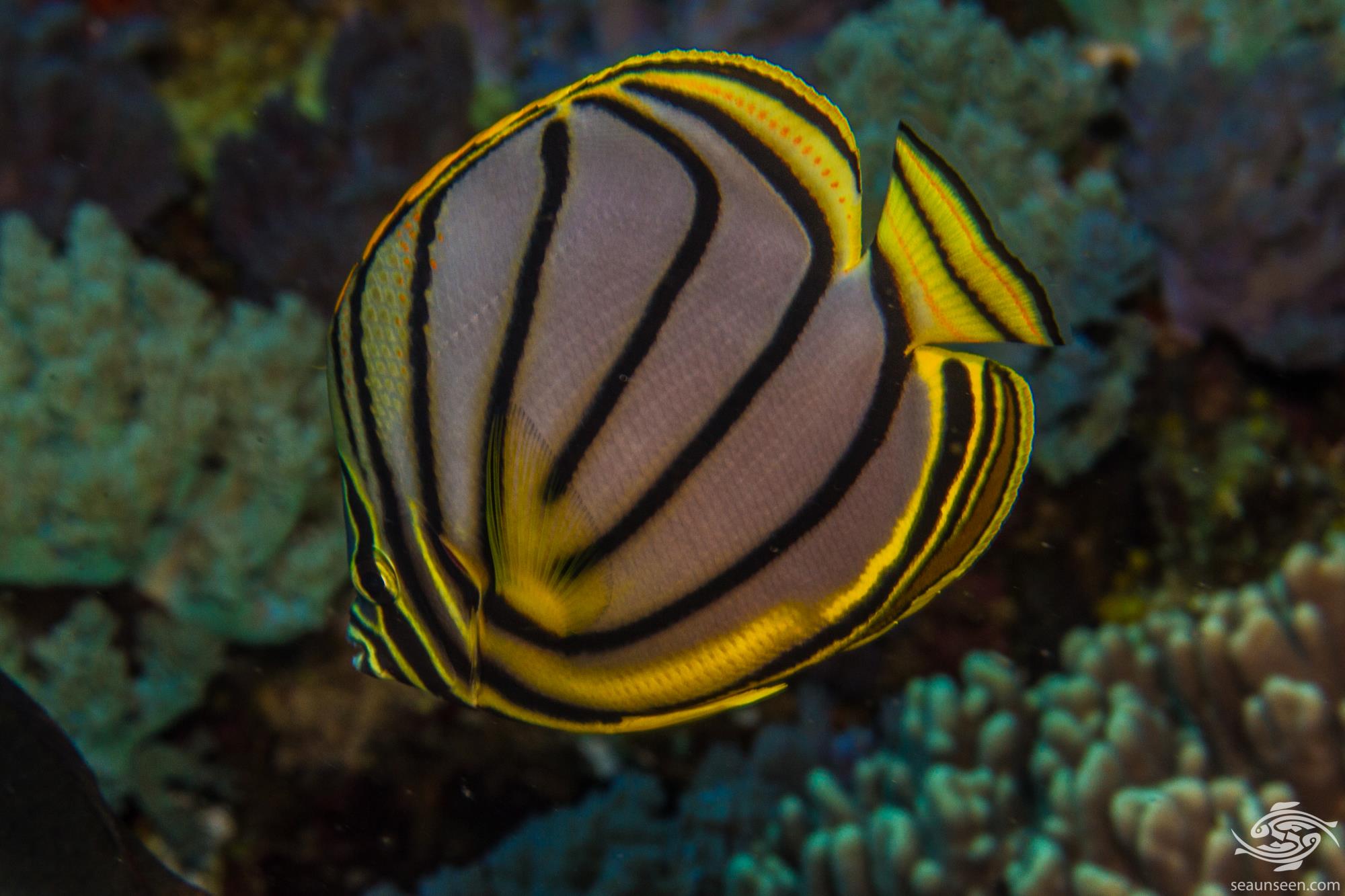 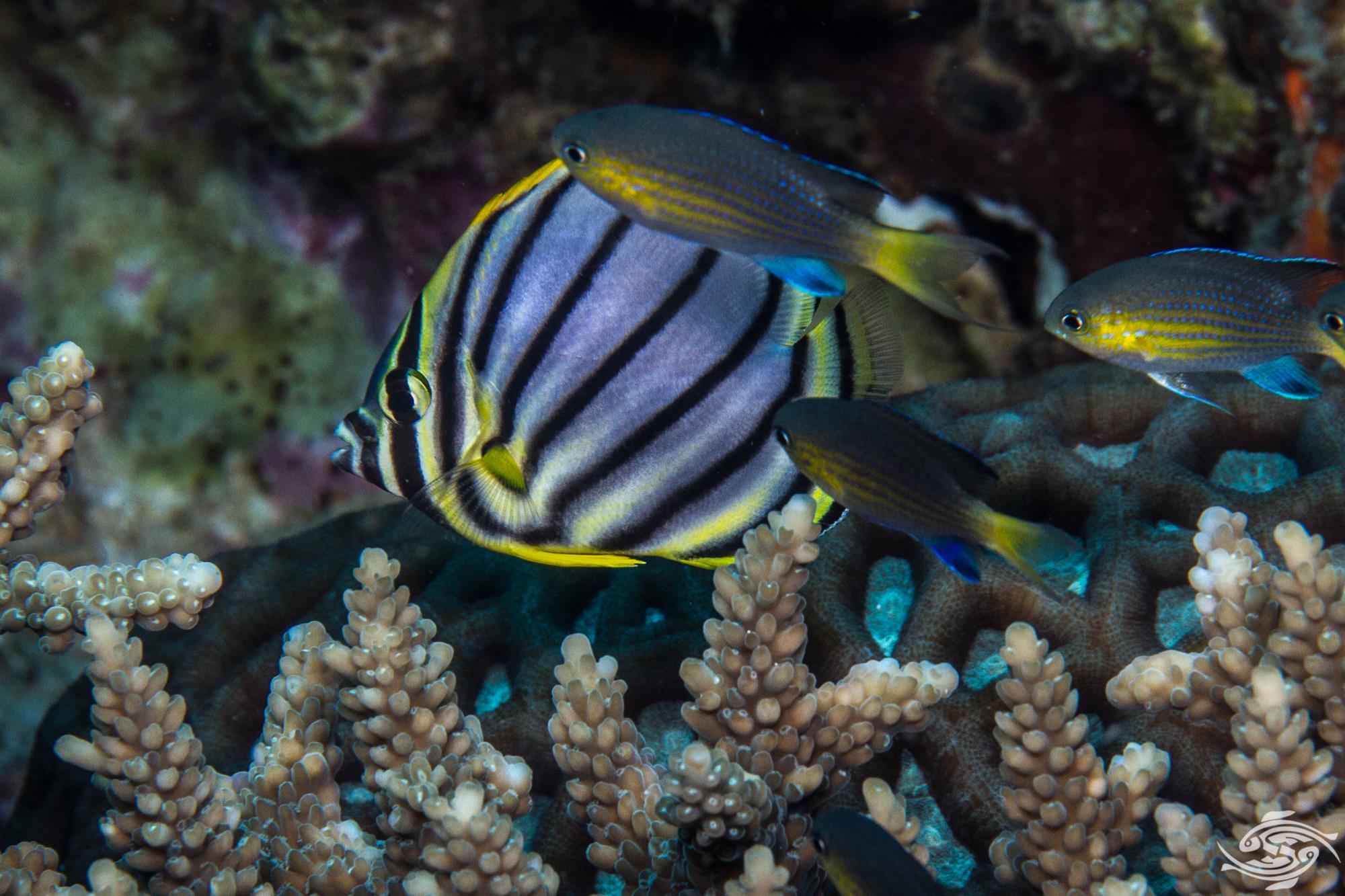 Mayer’s butterflyfish seem to form monogamous pairs and keep the same mates.  Little seems known of their breeding habits but they will almost certainly follow the breeding habits of other butterflyfishes.  The female swells with eggs and spawning takes place by scattering into the water table with the male fertilizing the eggs. 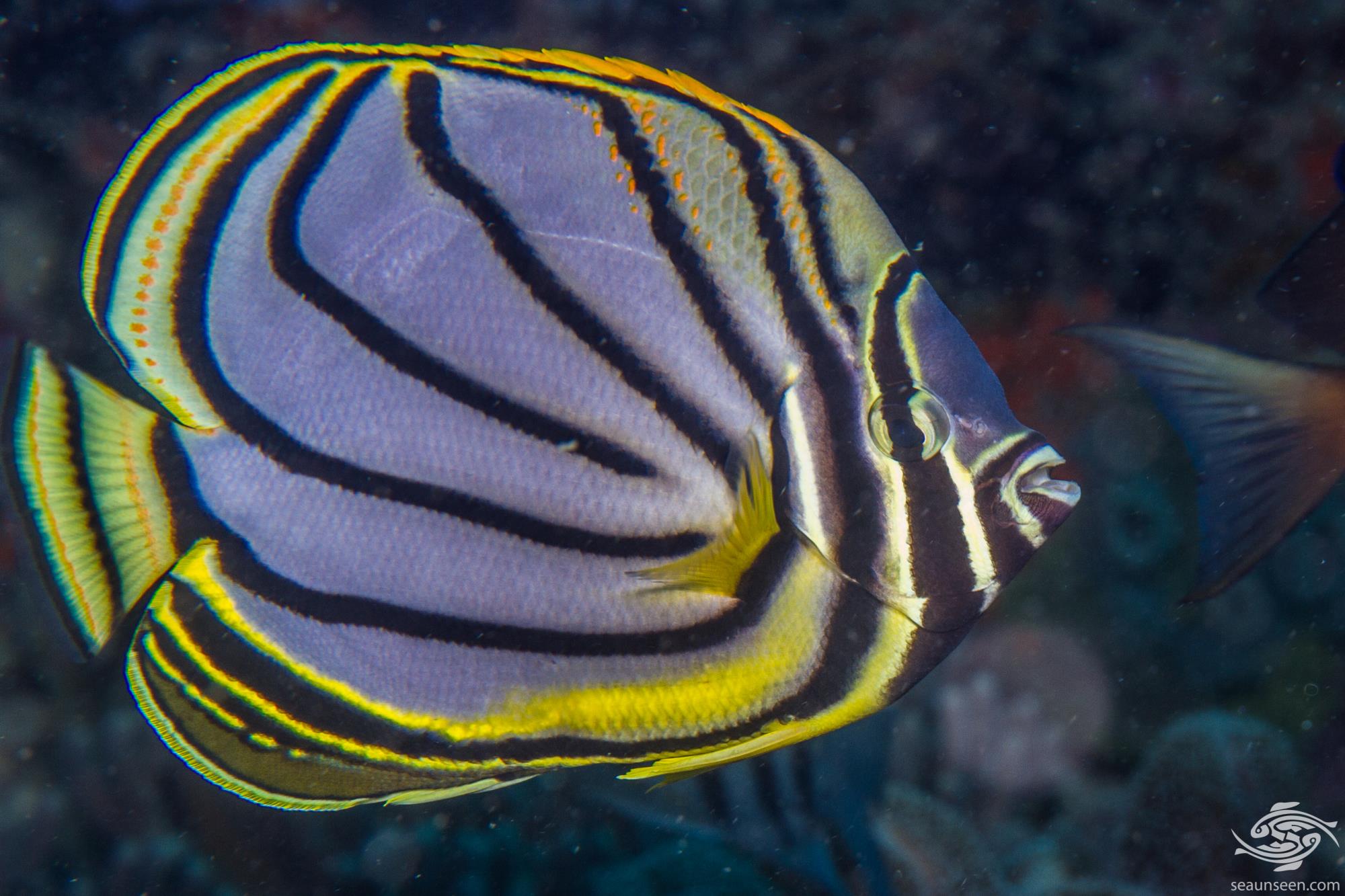 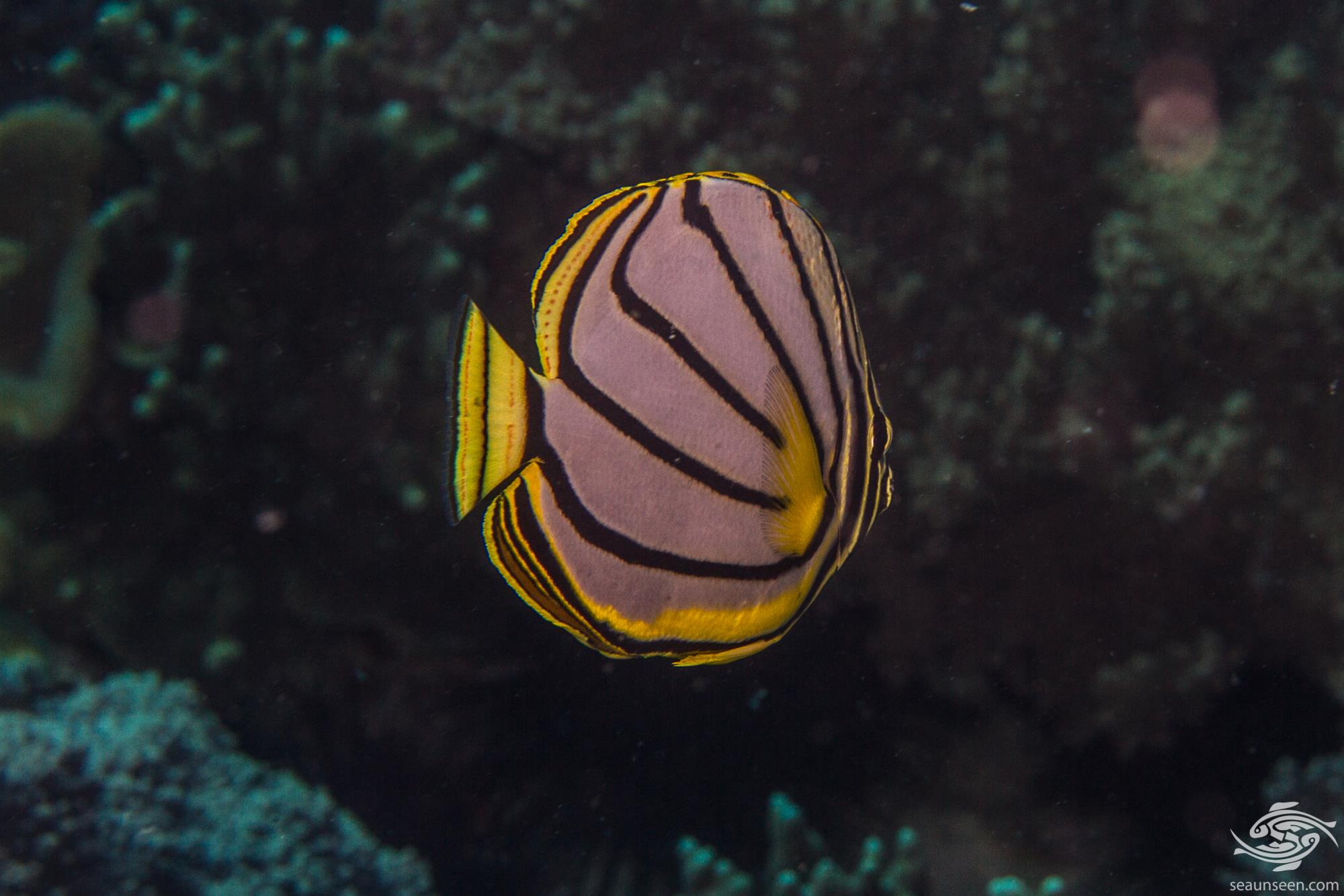 Meyer’s Butterflyfish do not do well in aquariums and even experts battle to keep them alive for more than a month or two. This butterflyfish is best left in the ocean. One aquarist in Durban, South Africa succeeded in capturing a juvenile and bringing it to full size and subsequently releasing it. He did this by providing the specimen with live rock with coral polyps every two to three days. So it is possible but very demanding on time and live rock. 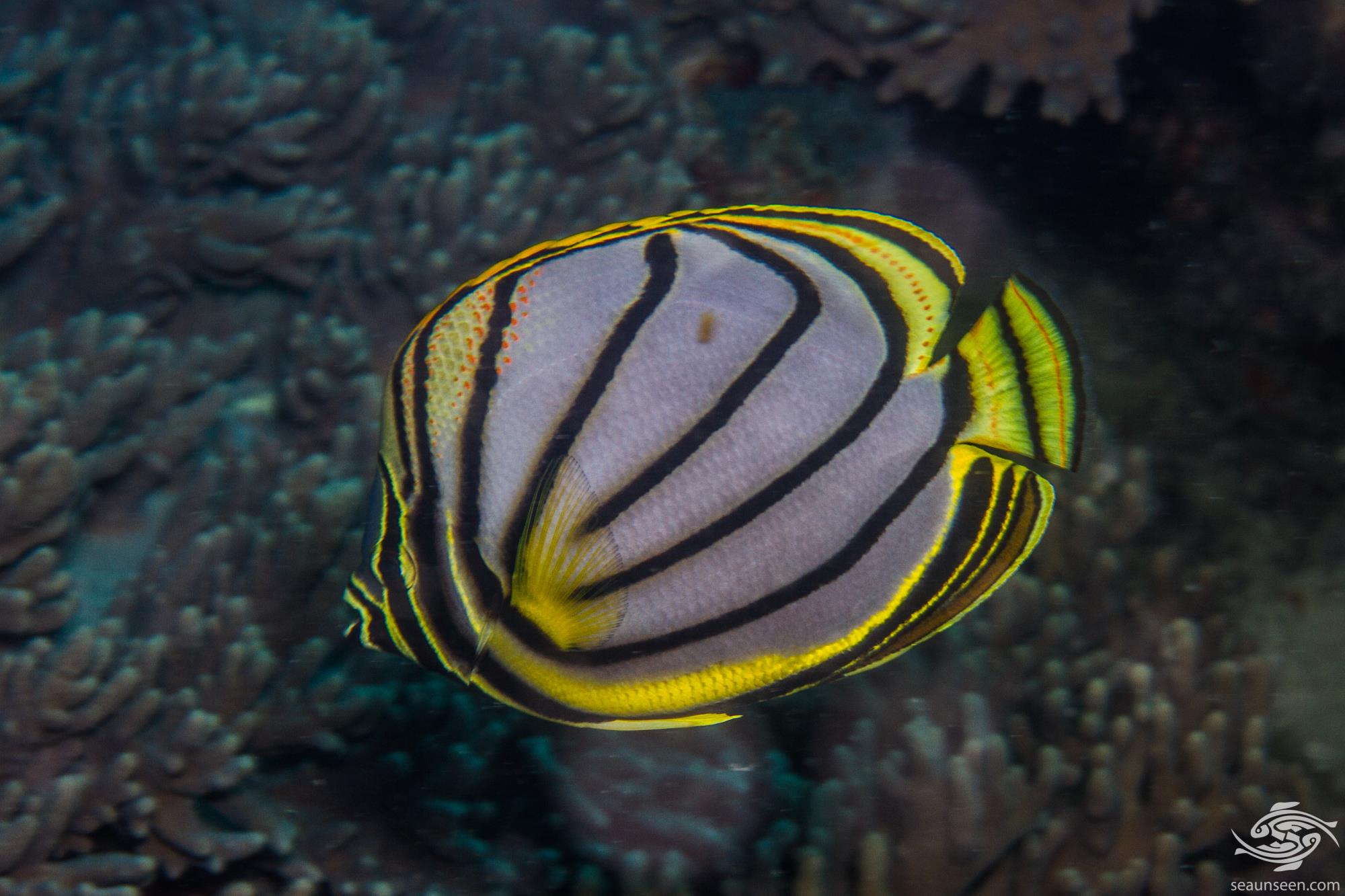 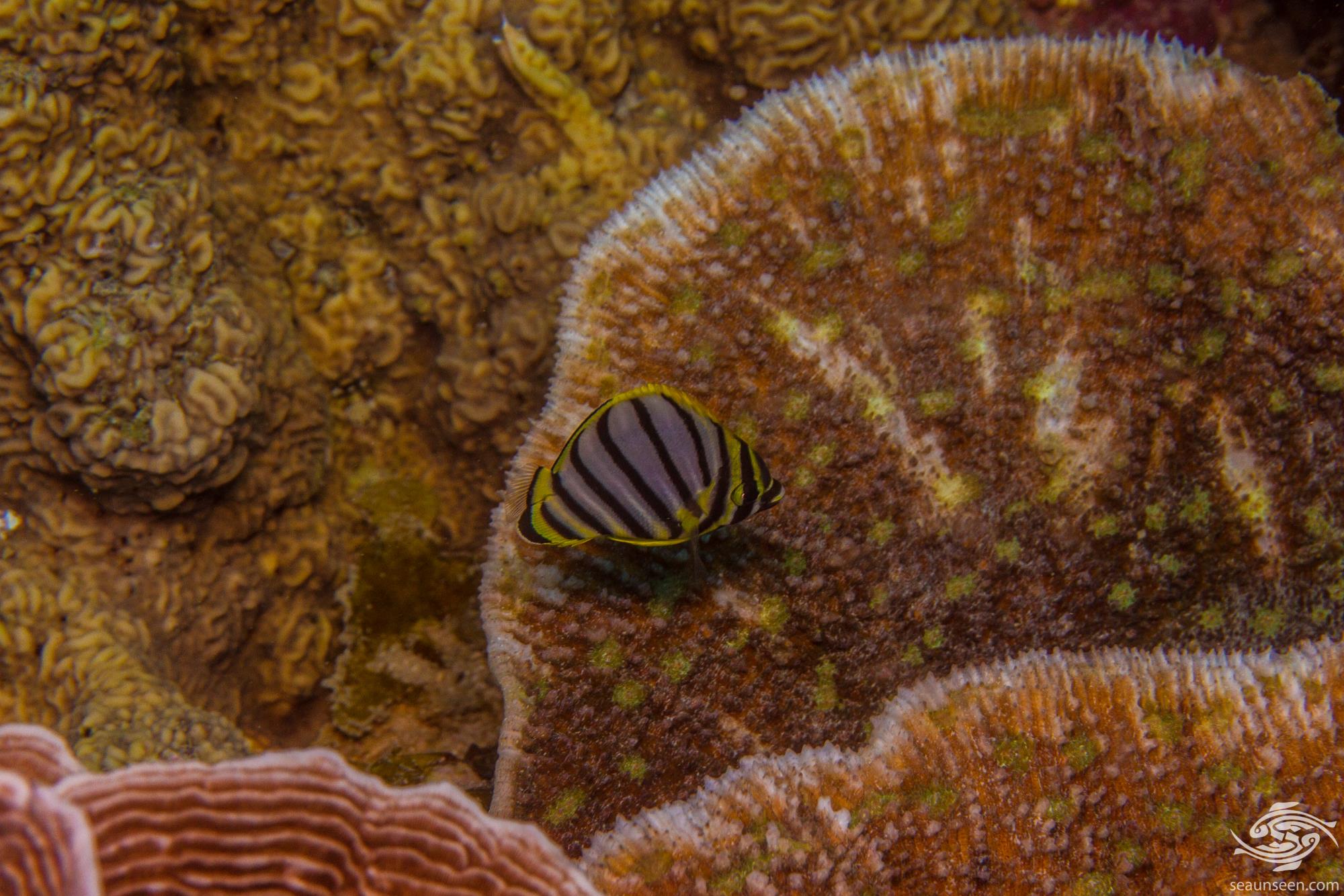