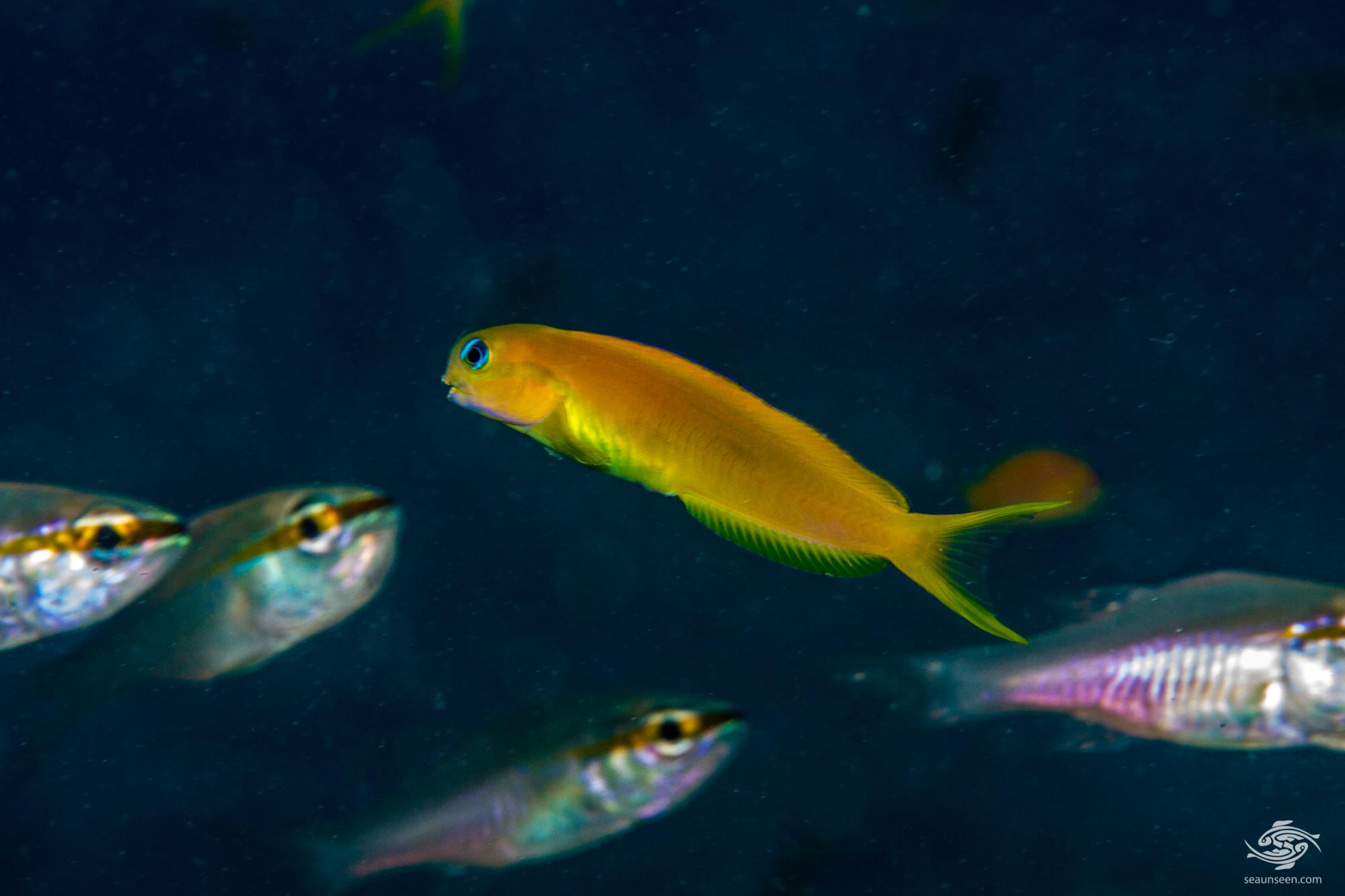 The Midas blenny (Ecsenius midas) is also known as the Golden Blenny, the Lyretail blenny and the Persian blenny. They are combtooth blennies that feed on plankton and are often seen swimming above the reef. They are not common but in certain areas there may be large numbers of them.

They were first described by Starck in 1967 with the holotype being from the Amirante Islands in the Seychelles. The Ecsenius genus is  unique among blenniids in that they have two sets of canines teeth, one set on each jaw. Unusually for fish that feed above the reef they have no swim bladders meaning that they have to keep swimming and cannot remain stationary in the water table.

The Midas Blenny obtains its name from its golden color which is actually variable. To a certain extent they are able to change their colouration and if one watches them they tend to be a darker color when swimming lower in the substrate near the bottom.  When higher up in the substrate the body and fins are a beautiful golden yellow color. The eye has two blue lines through it and the lips are often blue with a purple line along the bottom of the chin. The dorsal fin is edged in blue.  A very attractive fish with a distinctive slinky swimming style.

There is some sexual dimorphism in that males are larger measuring up to 83 mm whereas the females are smaller up to 53 mm.  In the male the first dorsal fin is enlarged compared to the female and the rays of the caudal fins are longer than those of the females. 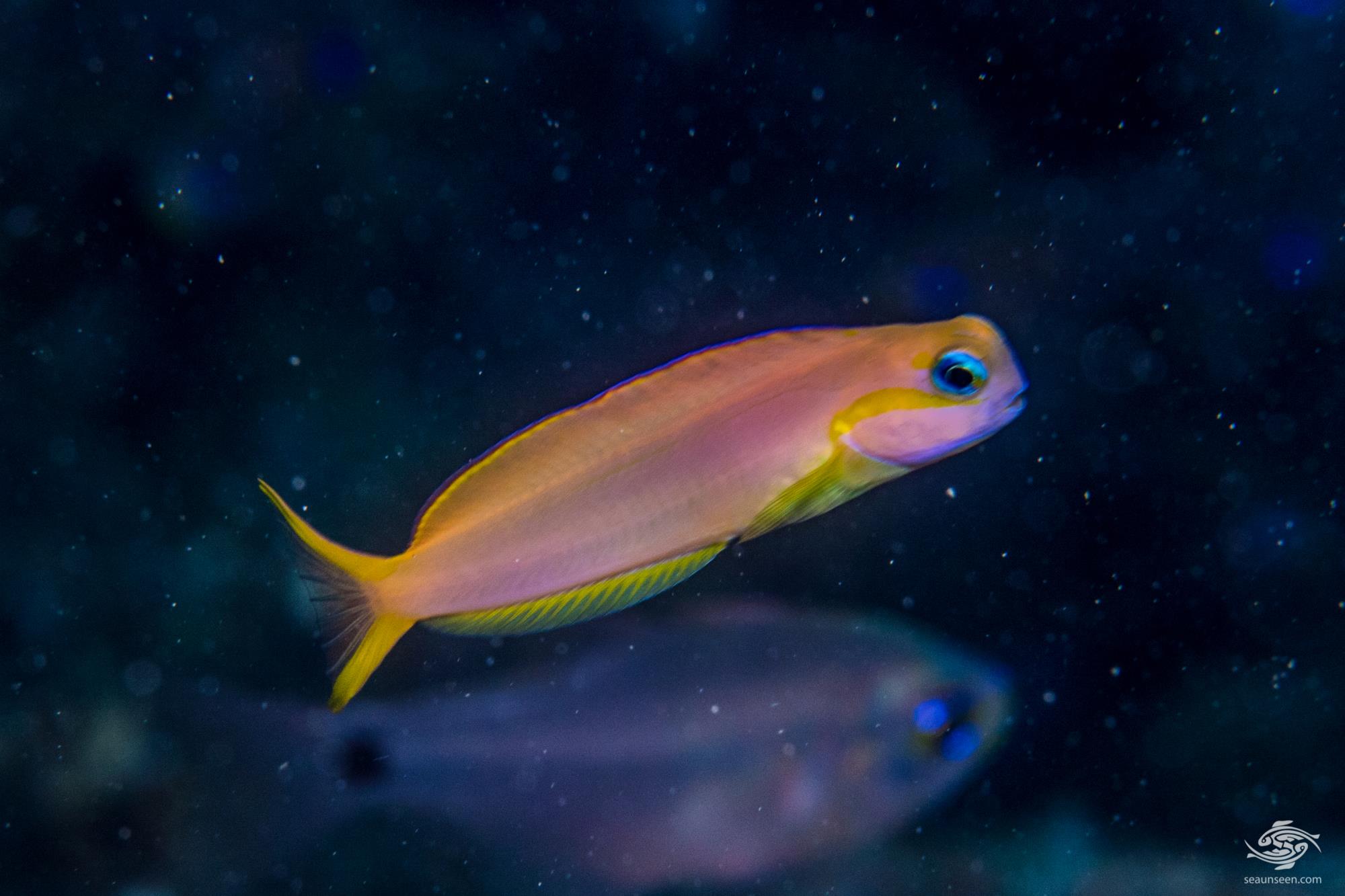 MIDAS BLENNY IN THE WILD

The Midas blenny seems to prefer particular environments, they are nearly always found where there are large numbers of Sea Goldies (Pseudanthias squamipinnis) although they may on occasion be seen with the Red-bar Anthias (Pseudanthias cooperi) and the Fusilier Damselfish (Lepidozygus tapeinosoma).  Certainly they like to swim within shoals of other fish which feed on zooplankton. They are most commonly seen below 12 meters and above 15 meters and the area where they are prolific is on the top of the walls on the east coast of Mafia Island on Dindini Wall.

This is an unprotected reef close to the coast with a strong current and wave action on the surface which  goes against what is reported elsewhere, nevertheless this is where they are at their most prolific with large numbers being present. In other areas they are not common. Even when prolific they are seen singular, but in the areas where they are prolific they remain apart by roughly three meters and still appear territorial, seldom interacting with each other. 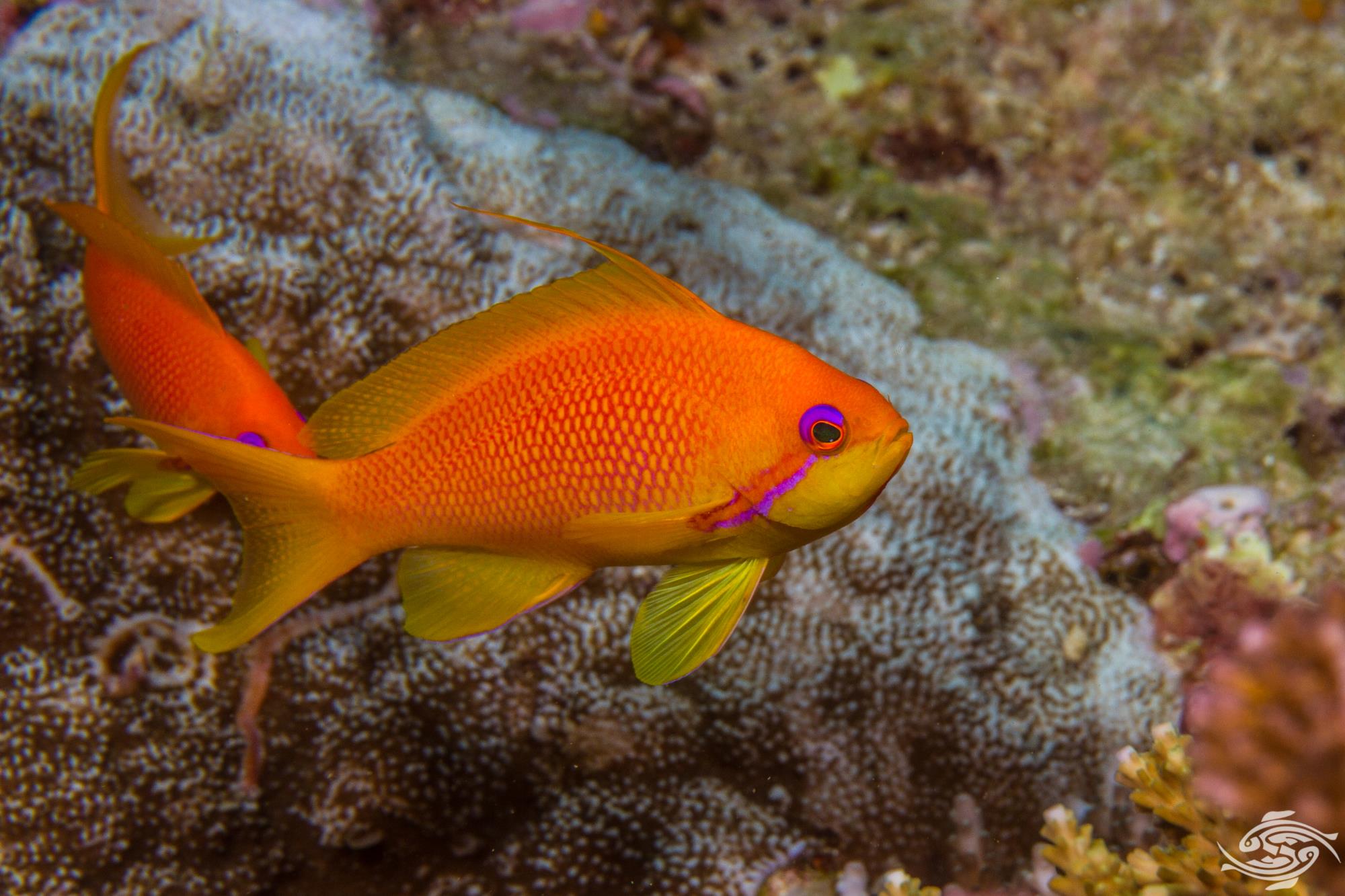 They mimic the female  Sea goldies (Pseudanthias squamipinnis) pictured above and swim within the shoals of these fish while feeding. Although one can pick them out from a distance quite easily, to photograph them swimming close up is very difficult as they are very active and have random swim patterns.  This probably as a result of their lack of a swim bladder. They seem highly territorial and if one returns to the same spot, the same specimen or an identical one will be in the same area with the same hole that it darts into when they feel threatened.

Jacob Dafni and Ariel Diamant put forward in an interesting article that the mimicry which they term school orientated mimicry differs from Batesian and Mullerian mimicry. Starck who described the species believed that they were the mimic and received protection from the shoal because of the difficulty a predator has in picking them out which makes sense.  After many tries photographing them free swimming in these areas where they are prolific with many female Sea goldies around I can attest to this. It is nearly impossible.

There appears to be no interaction between the two species and the Midas Blenny appears to swim within the shoal of female anthias at high speed and then make short darts out to feed on planktonic matter.  The female Sea goldies having a swim bladder sit in a stable position and the Midas Blenny already having some speed is faster off the mark.  They also seem faster swimmers overall than the anthias and are easily able to out compete them for passing prey.

When they swim lower down closer to the substrate they often intermingle with Cardinalfish and certainly darken their colors at this level but this is likely to camouflage against the background although a yellow line/patch does appear in the front of the body.  Hard to say, one can draw ones own conclusion off of the image below, certainly not a good mimic though. 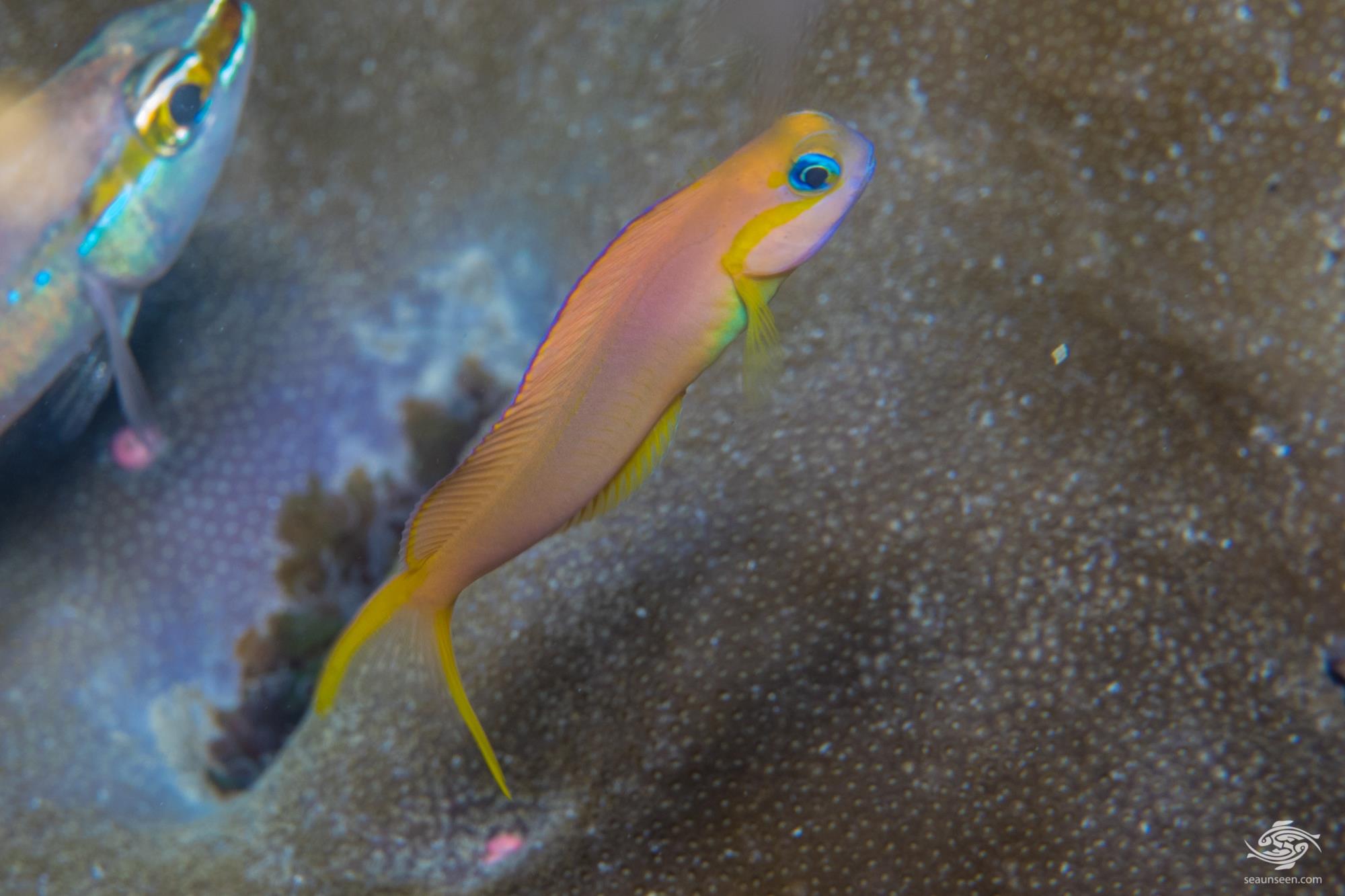 The Midas Blenny occurs from the east coast of Africa up to the gulf of Aquaba and eastwards to the  Marquesan Islands. They are usually found from 12 to 18 meters but are reported as deep as 40 meters. 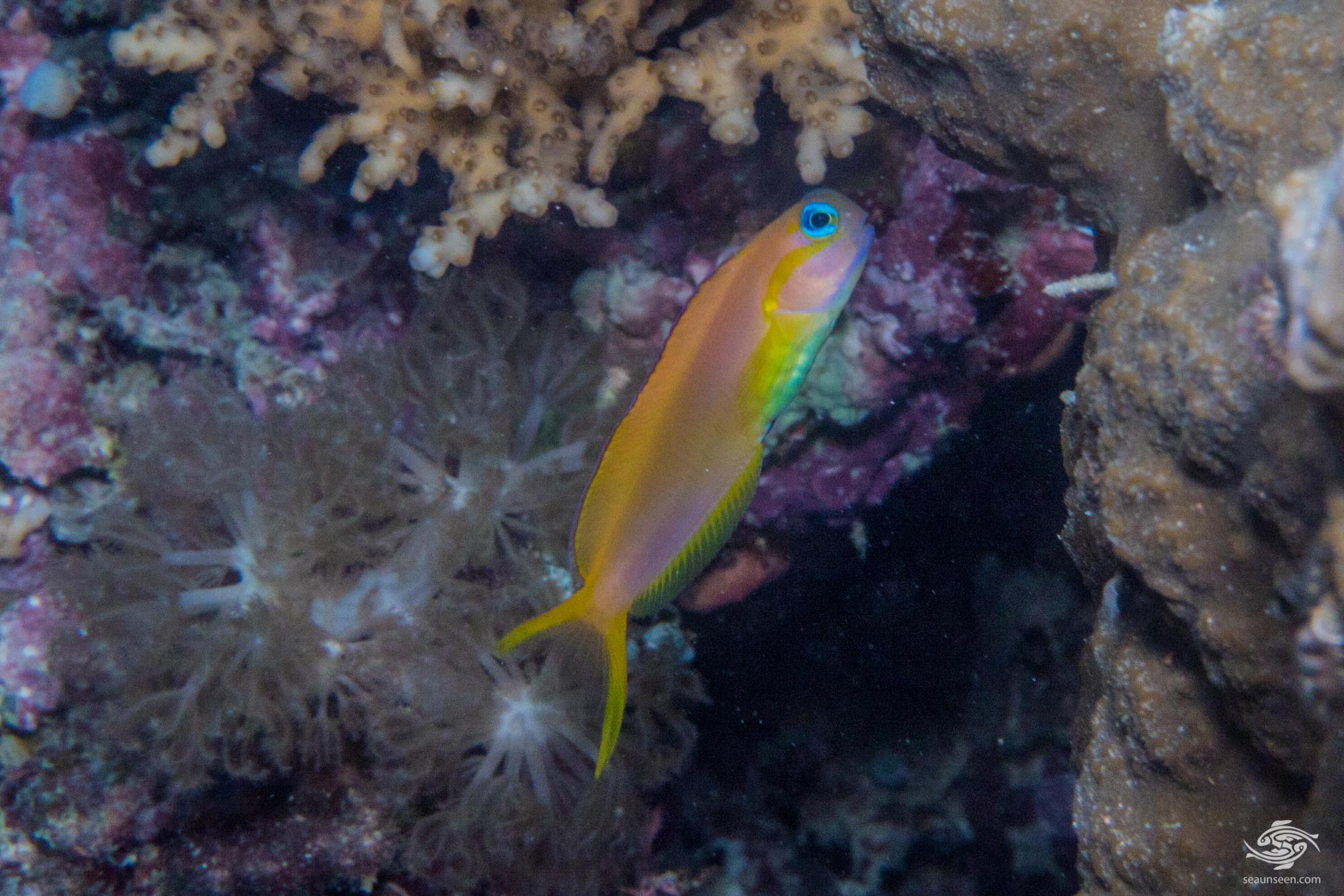 Unusually for the genus, the Midas blenny is a planktivore and feeds on zooplankton although they do supplement their diet with algae. 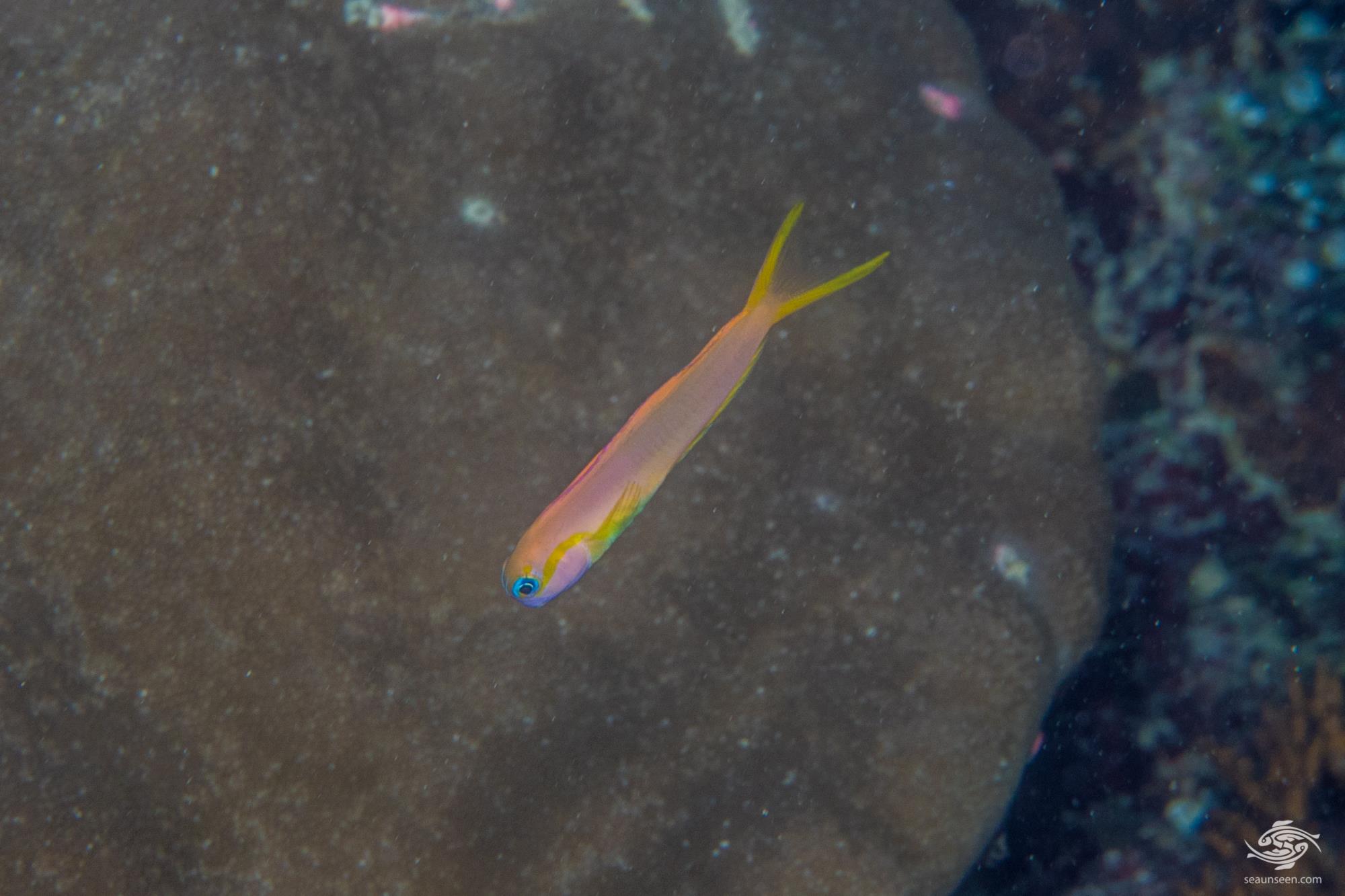 Very little seems known of the mating habits but it seems possible that the males care for the eggs after mating has taken place. 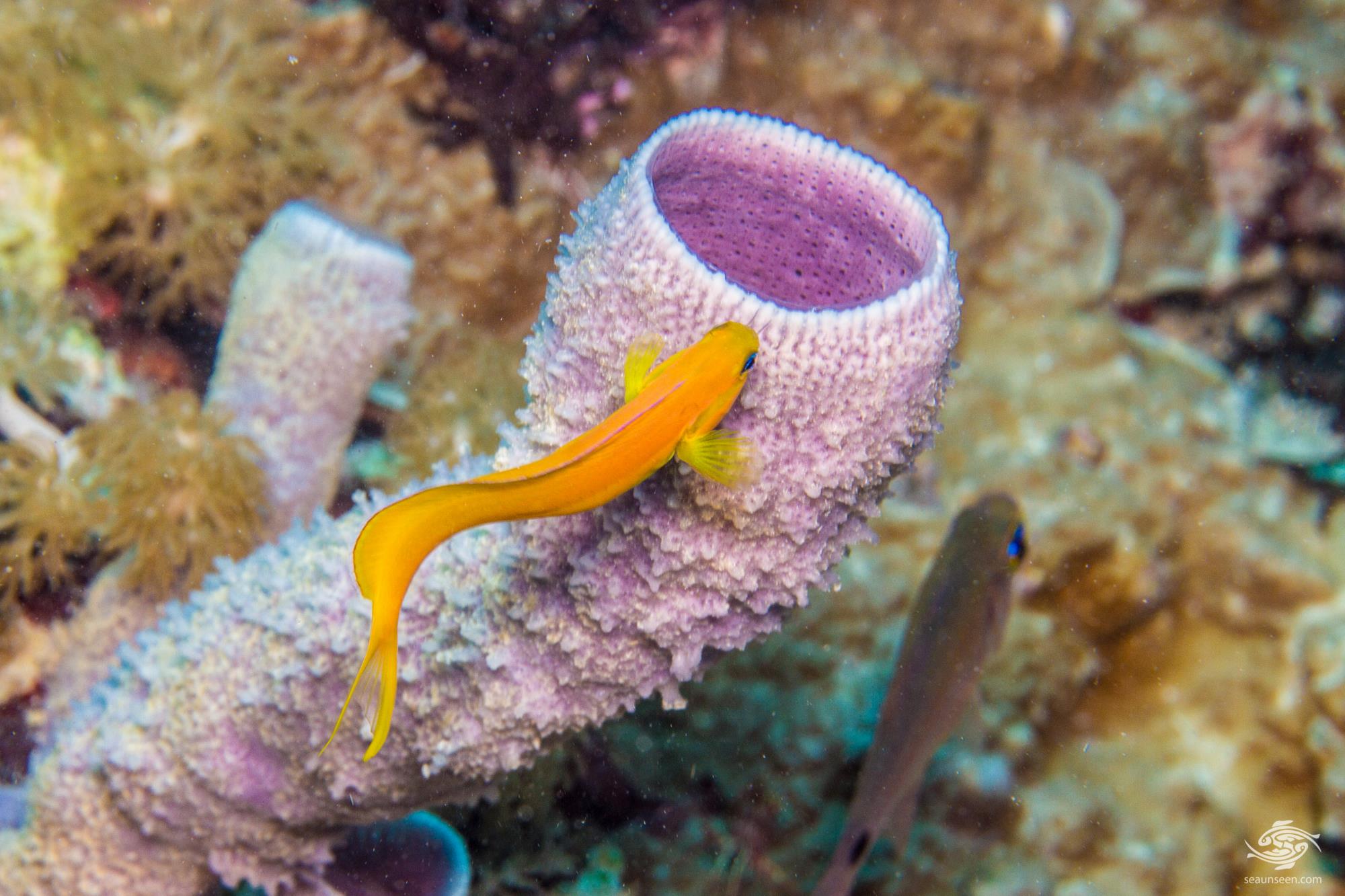 The Midas blenny may suit some aquariums, because they spend time swimming in the water column they can make a colorful addition to ones tank.  They may pick on some invertebrate’s and one should be very careful that they are not bullied by larger fish .  There is a very good article on keeping them here. 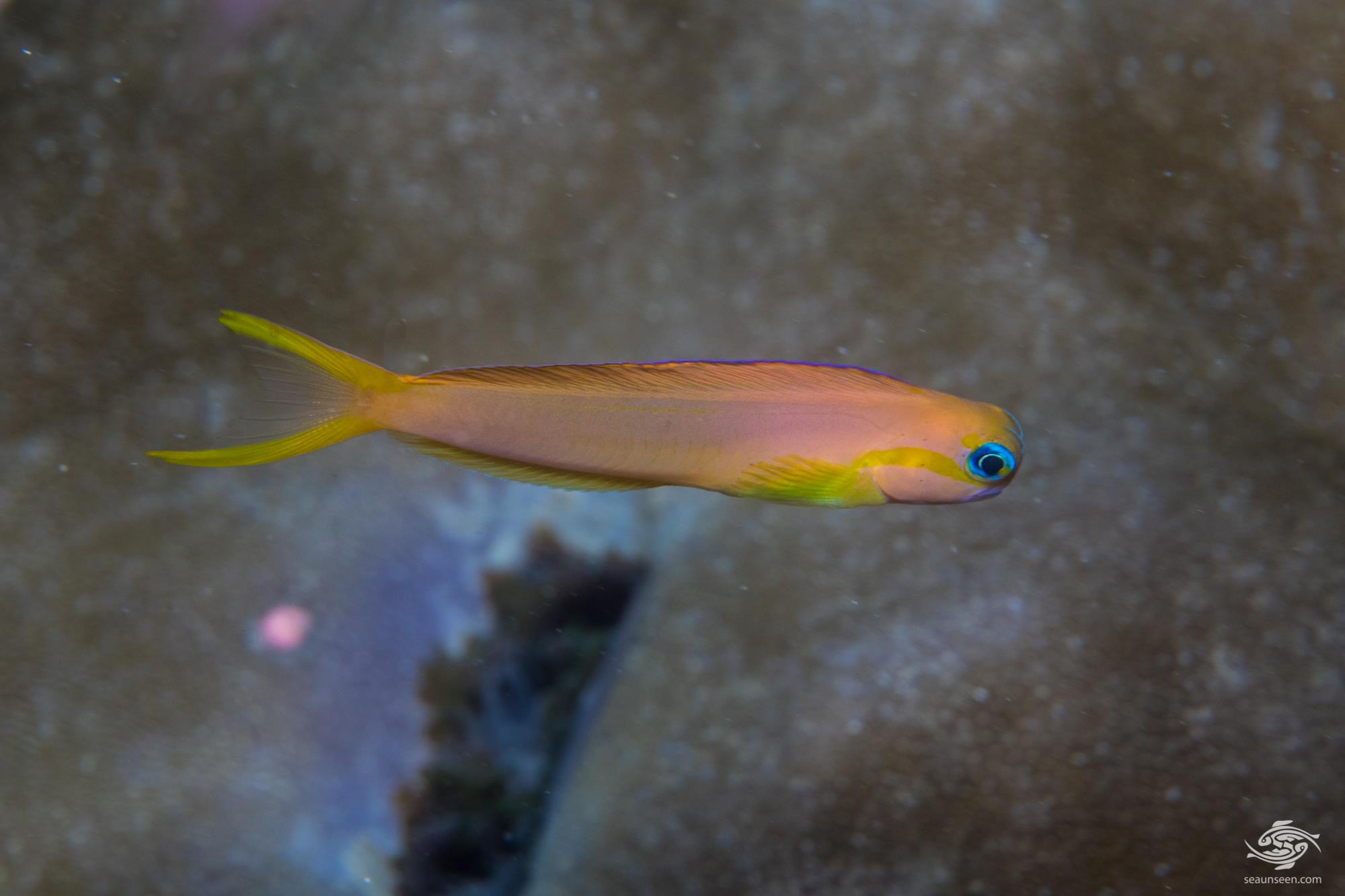