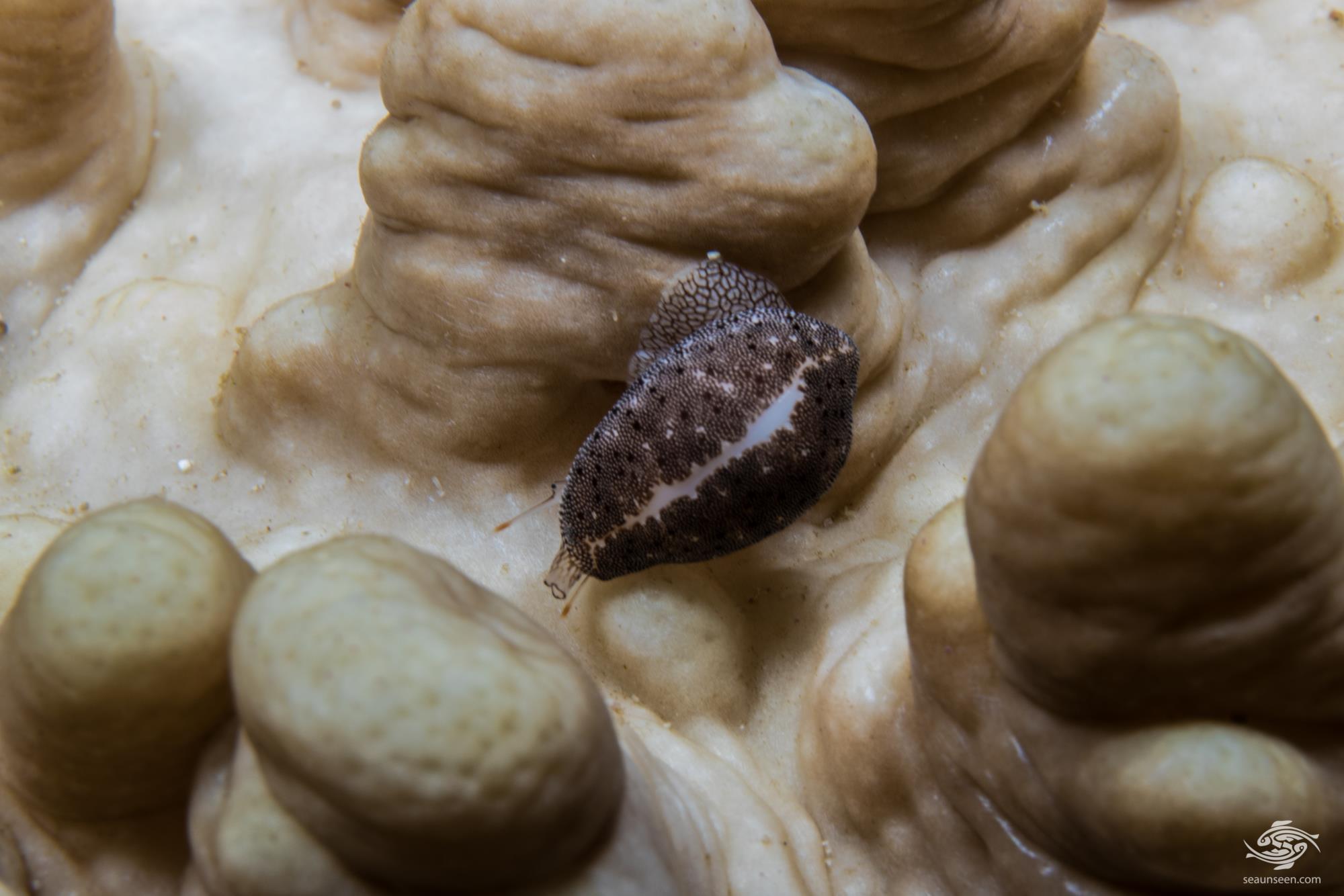 The Milky Ovulid (Procalpurnus lacteus) is also known as the Netted Milky Ovulid.  Although they resemble cowries, they are not a true cowries , instead they are in the Ovulidae family also known as False Cowries or Cowry Allies. Ovulids are predatory or parasitic marine gatropod molluscs in the same super family Cypraeodea as the true cowries. 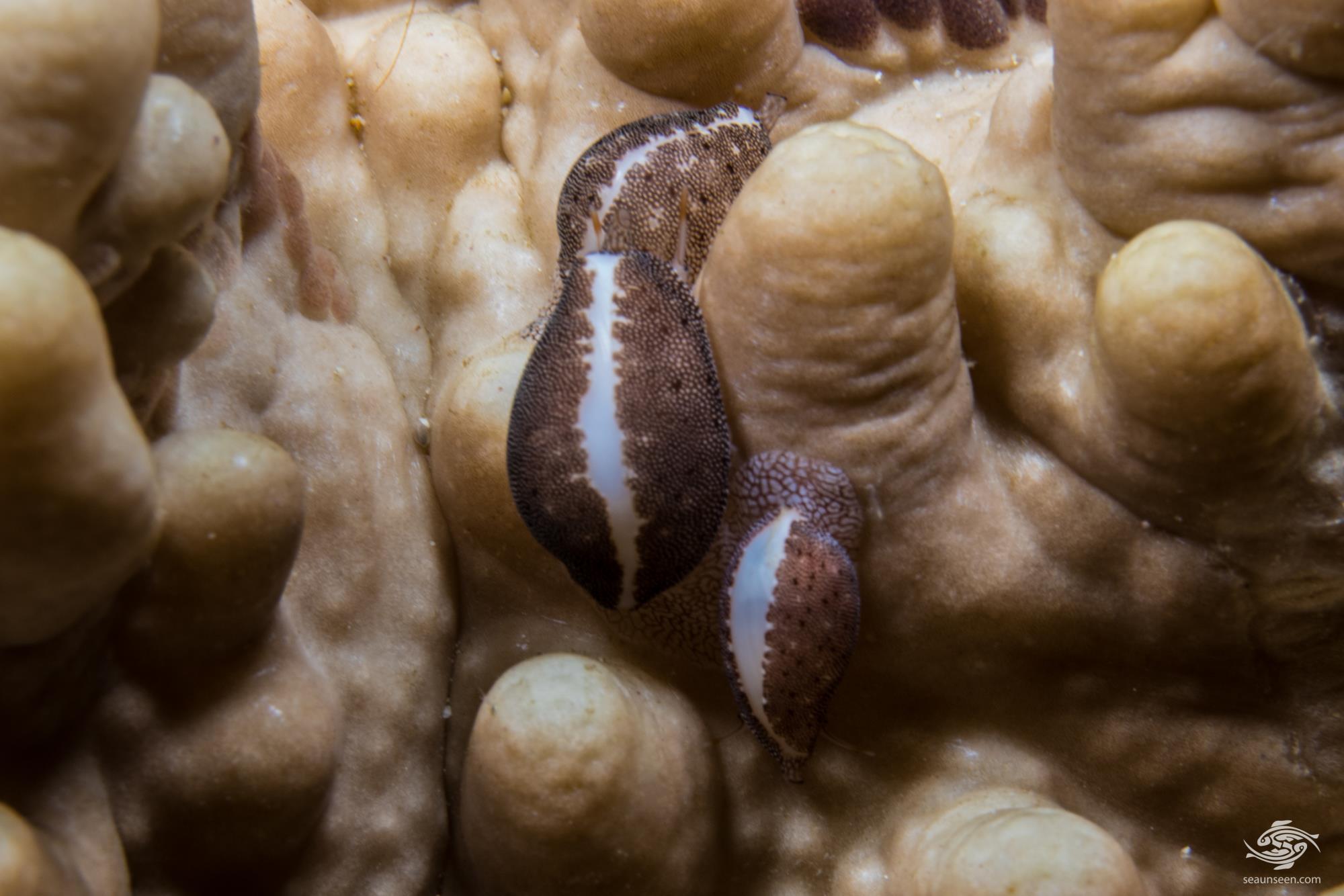 As can be seen in the images, the Milky Ovulid has its mantle out over the shell most of the time. The mantle has a white back ground color with a fine lace like pattern in a darker brown. The color varies slightly from specimen to specimen and can vary from area to area as well. The foot also has a lace like pattern on it but not as fine as that on the mantle.   The shell itsself is an off white color. They grow up to 1.5 cm in length. 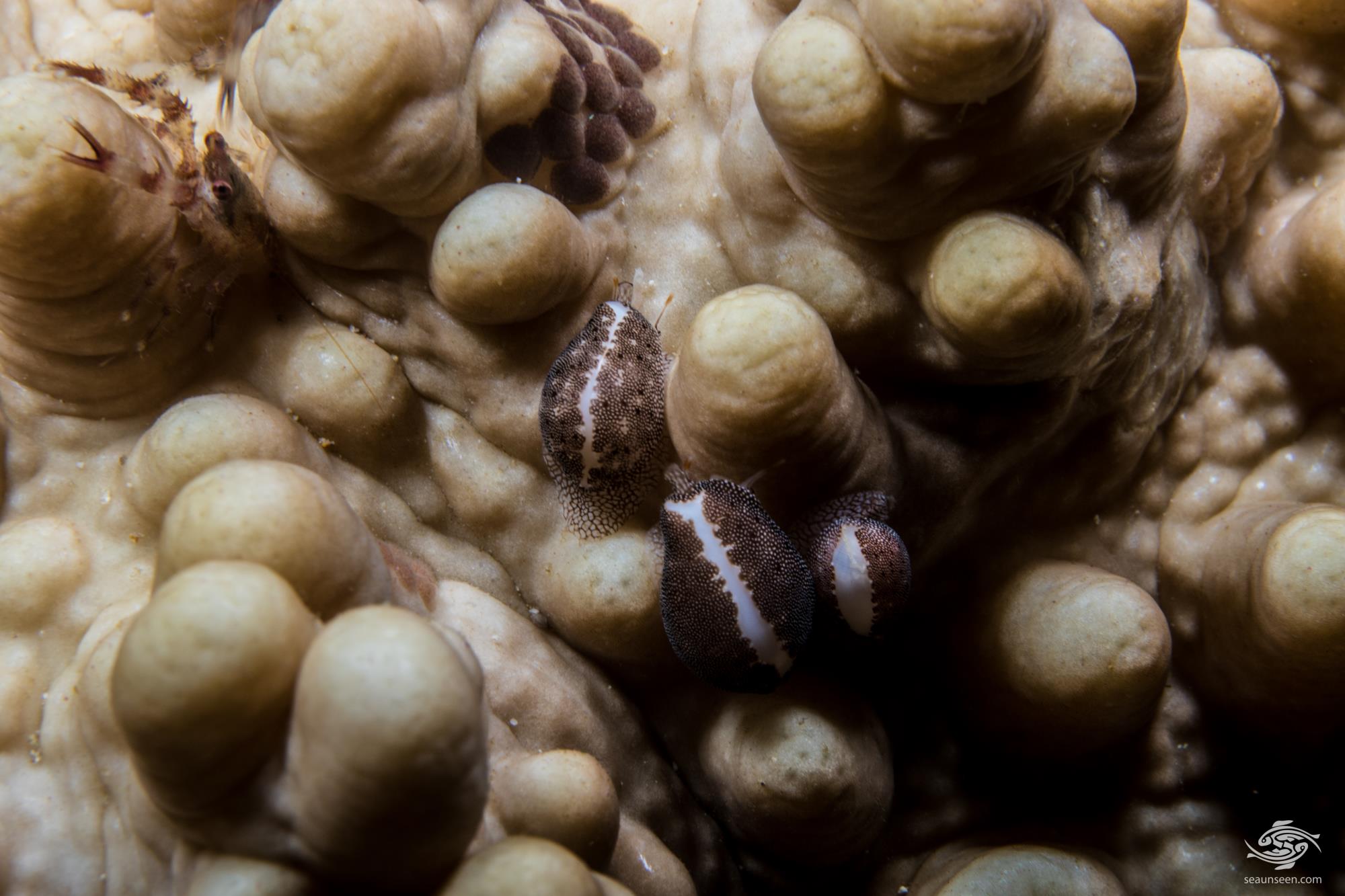 MILKY OVULID IN THE WILD

The Milky Ovulid are not that commonly seen in Tanzania perhaps because they are nocturnal feeders and roost during the day, usually on the underside of their prey. They are also fairly small and one really has to look out for them to find them. 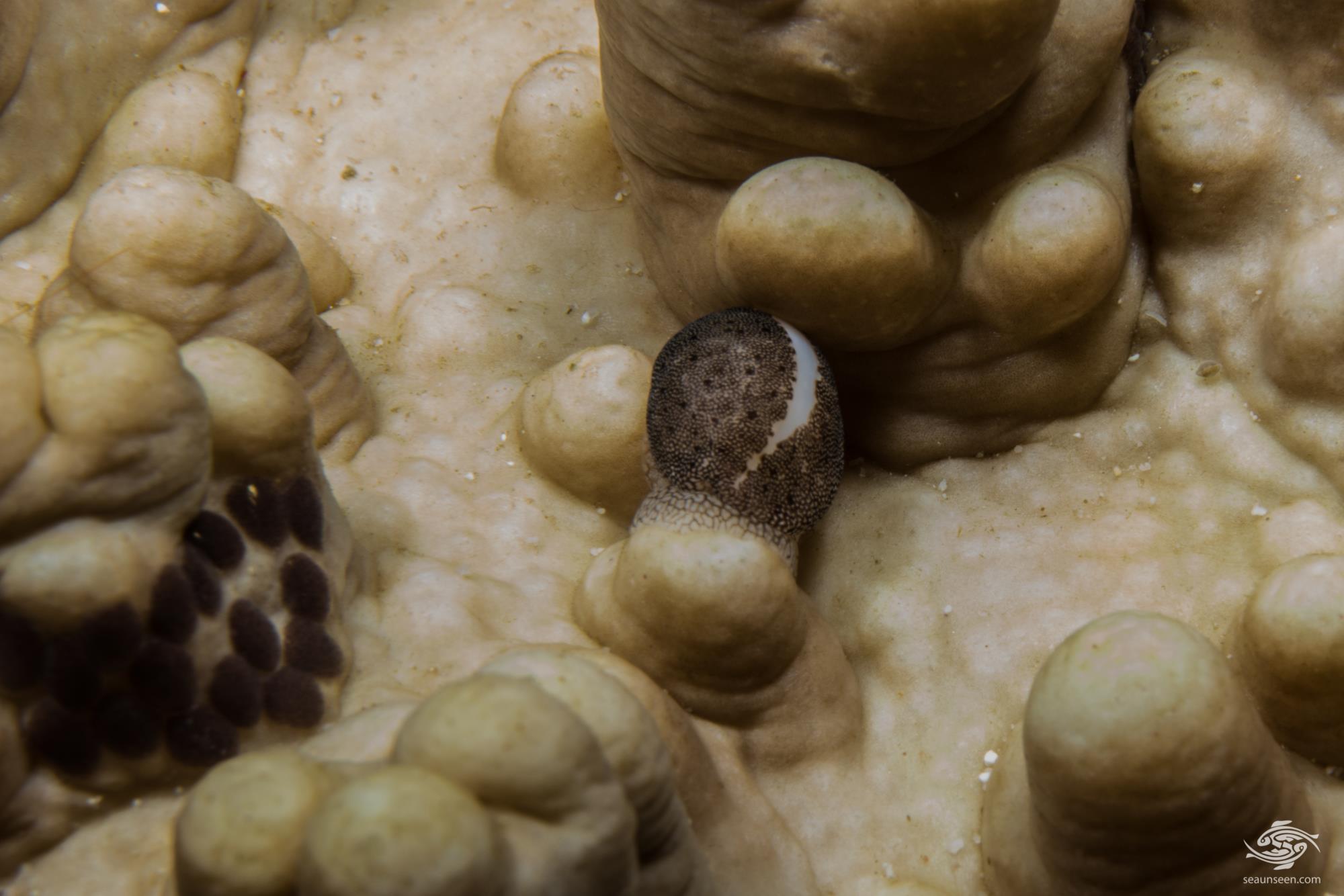 The Milky Ovulid is found across the Indo-West Pacific region from East Africa to Australia and north to Japan, they are found  on numerous species of  gorgonian corals. They have been found from 10 meters down to 250 meters in depth. 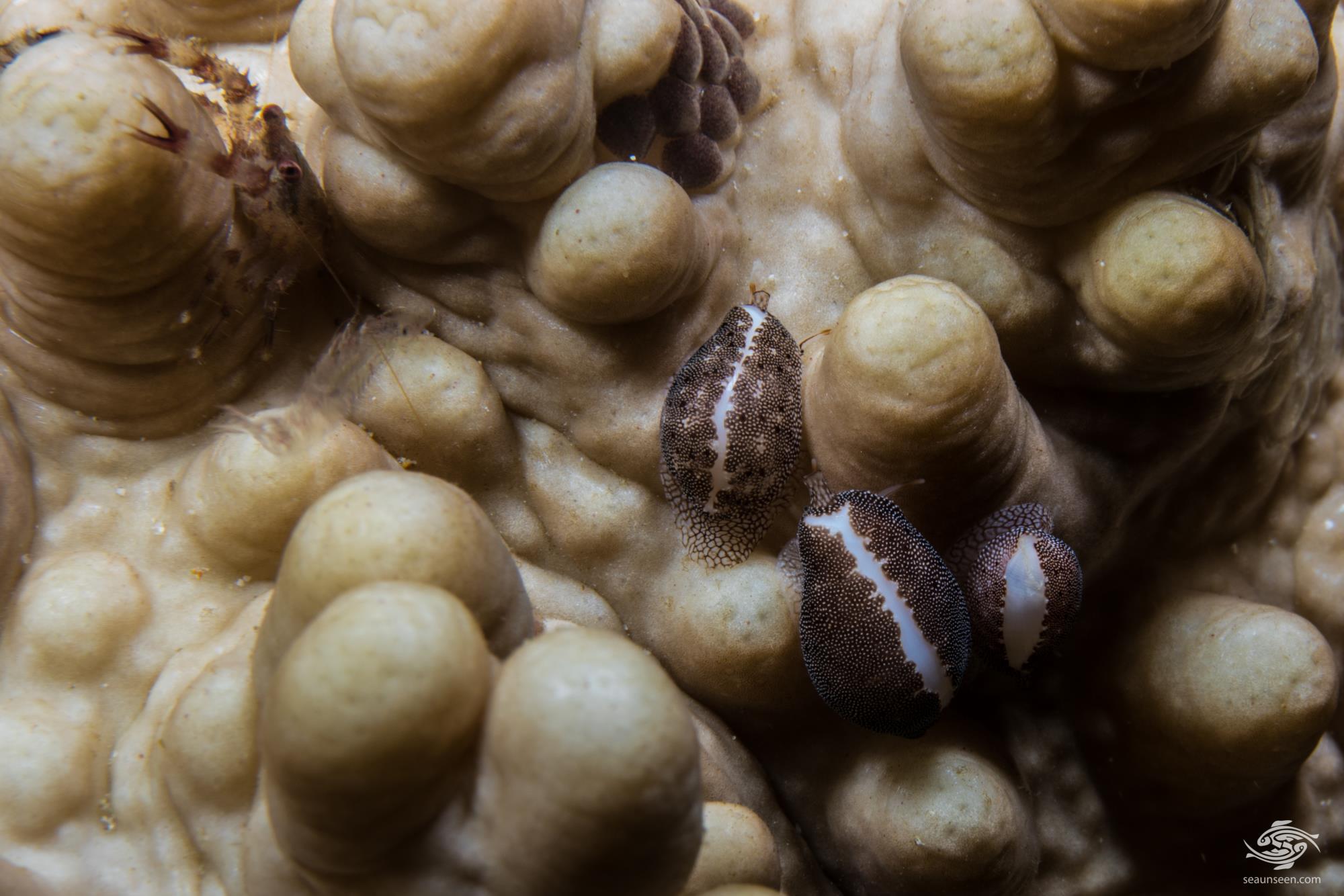 The Milky Ovulid preys predominantly on the polyps of leather corals in the Sinularia Genus. Some publications refer to them a exo-parasites but they do not seem to do much damage to their hosts. 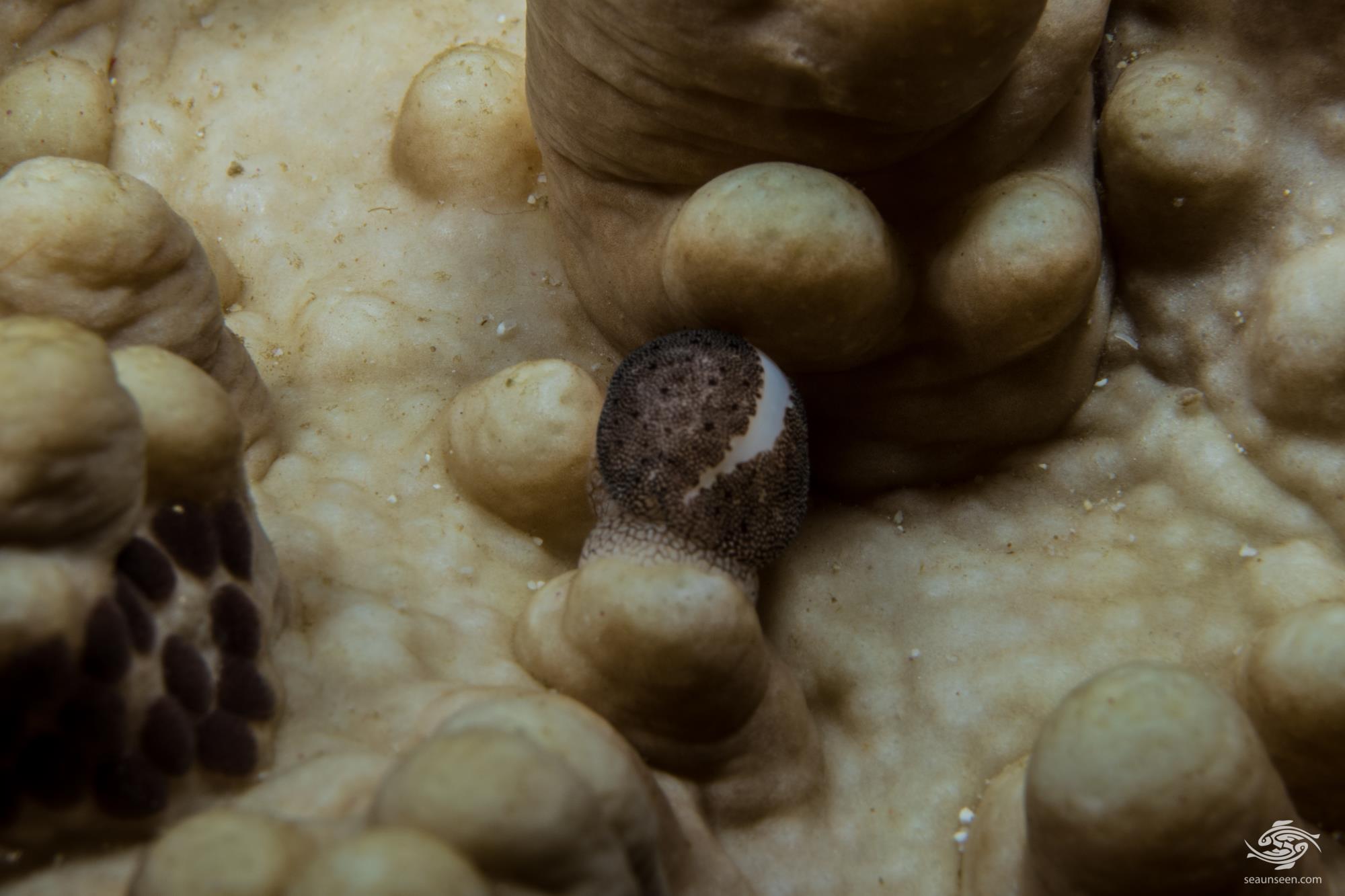 The sexes are separate and the female lays the eggs on the leather corals. These can be seen on the left of the image above. The capsules are fairly large and contain between 150 and 200 eggs each.  Once the eggs hatch they undergo a pelagic stage and then settle on the substrate to search for a host.

The shells are harvested for collectors, but given the lack of information on this species little is known of the impact on the population. Shells are best left in the ocean.

The Invisibility Cloak. Ovulids and Octocorals of Melanesia and Australia and the magic mantle that links them.  Roger Draper and Sue Churchill.