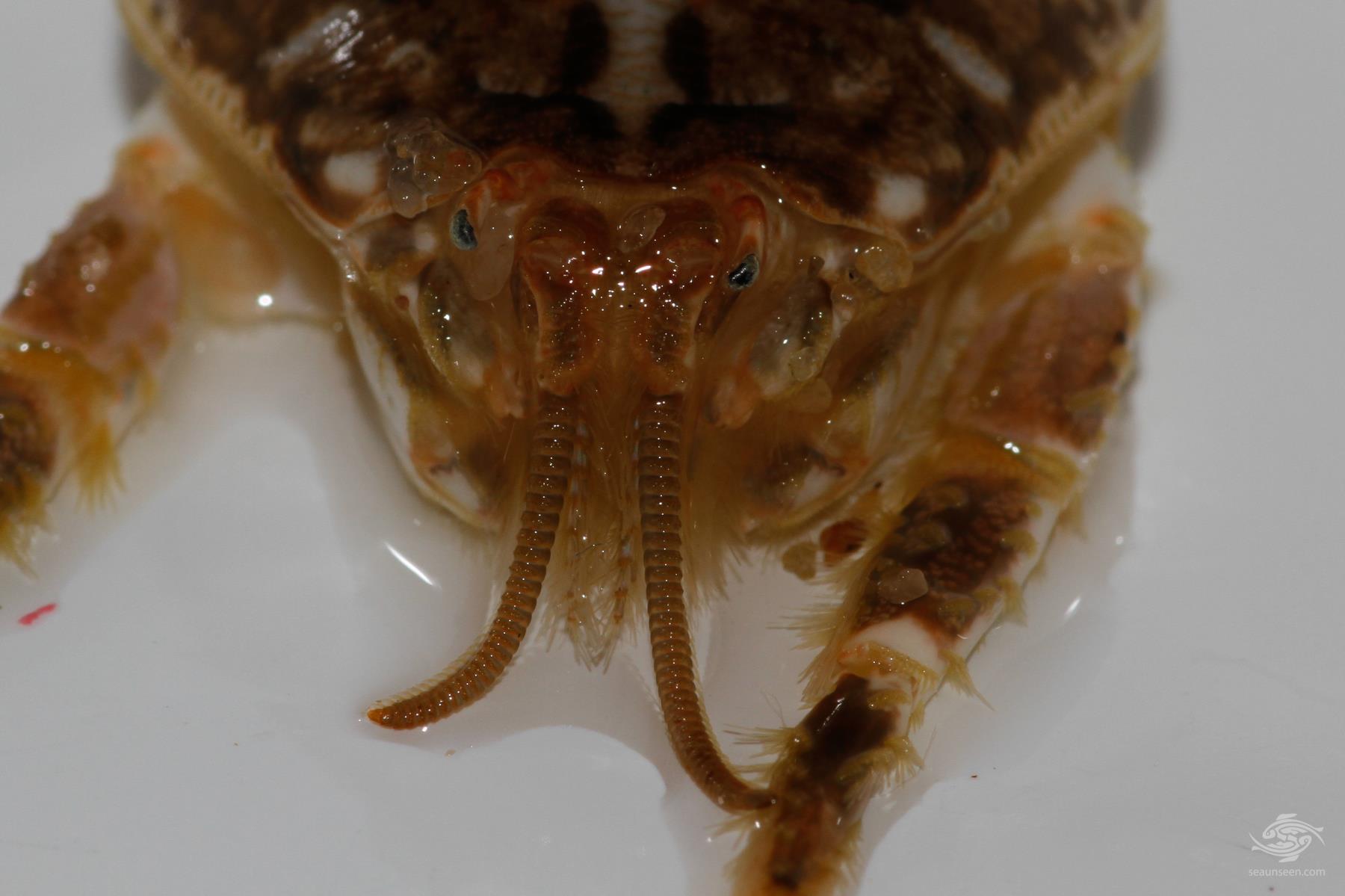 Mole crabs of the genus Emerita, also known as sea lice, sand fleas or sand crabs, are small crabs that are seldom seen, except perhaps when their shells are washed up on a beach. They spend the majority of their adult lives in the sand in the surge zone on beaches, obtaining their nutrients from passing waves. They are well adapted to surviving in this inhospitable area which is constantly pounded by waves.

Mole crabs have a tough rounded exoskeleton on the upper side to deflect the force of a wave. On the underside they are able to hold their appendages close to the body, allowing them to absorb heavy impacts from waves. The coloration of the upper section varies from species to species but is often a brown green color and they have segmented antennae with a row of hairs on the underside. Some species have recessed eyes while others eyes are on short or long stalks.

On the underside mole crabs have five sets of legs which only allow them to move backwards. In addition they have a specialized V shaped digging tool known as a telson which is attached to the rear of the body and faces forwards. This provides protection for the soft underbelly when in its folded position. The telson is also used to anchor them into the sand. Mole crabs can move backwards and dig themselves into wet sand using the telson in a remarkably short period of time. Research in Indonesia indicated that they are capable of burrowing under the sand in under one second. Females are larger than males and are typically some 4 cm long when full grown. 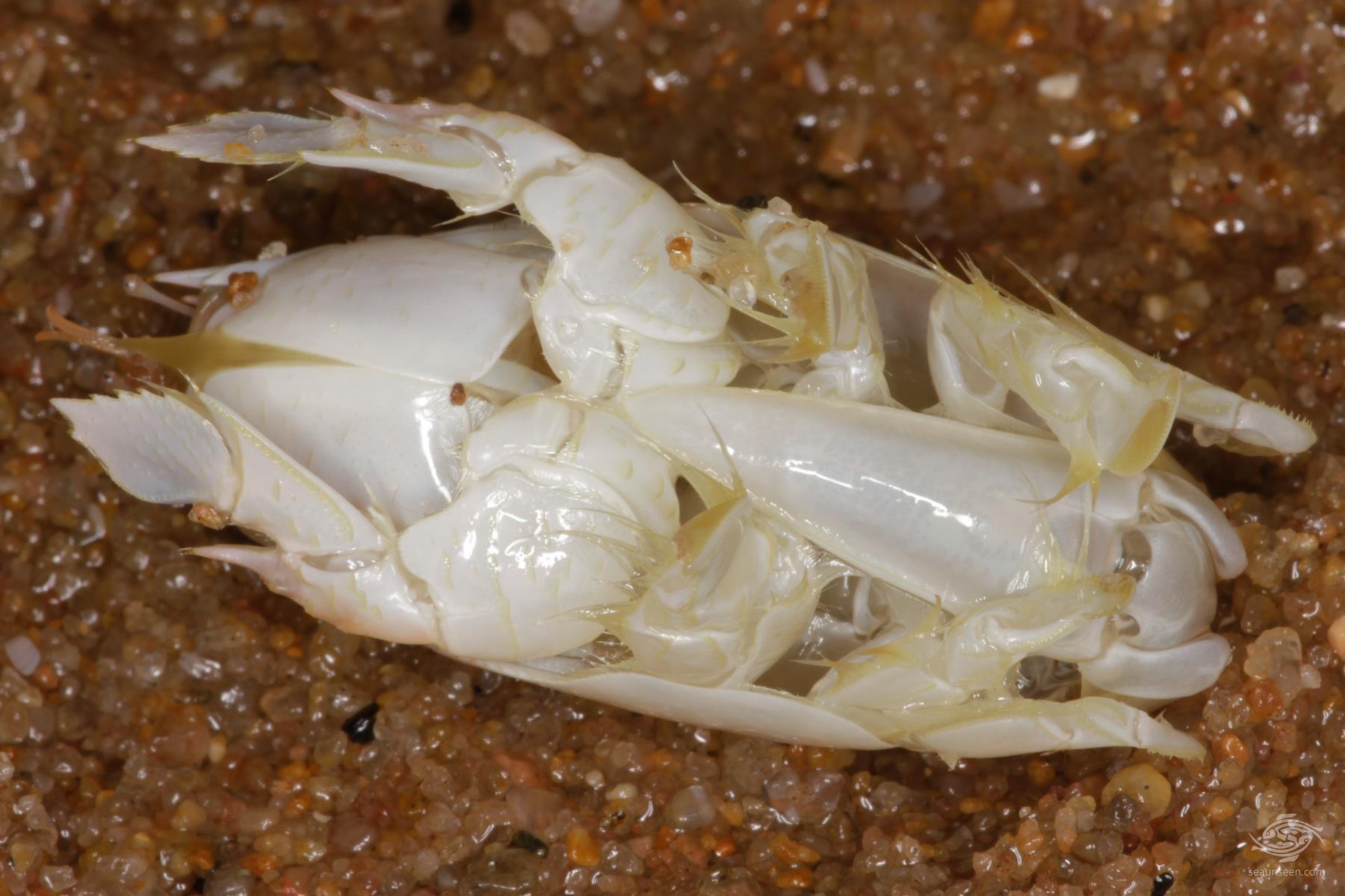 The genus is distributed in tropical and sub tropical areas around the world. They live in the wash zone on beaches and burrow in the sand above the wave impact zone. They are found in colonies on sandy beaches and the colonies may be spotted when the waves pull back. They face the land and their their feelers make a v shaped pattern in the sand as the wave pulls back down the beach. As the tide changes so they move their position to stay in the wash zone. Interestingly researchers found that if one hosed an area with a strong flow of seawater from the sea side, the crabs immideatly reversed direction

Extending their feathery antennae into the water they filter plankton and detritus from the water as it washes past. These are then passed into the mouth. The crabs move up and down the beach as the tide rises and falls and thus ensure that they are in the optimum position for feeding at all times.  The optimum position is the area with the maximum flow past of the receding wave. 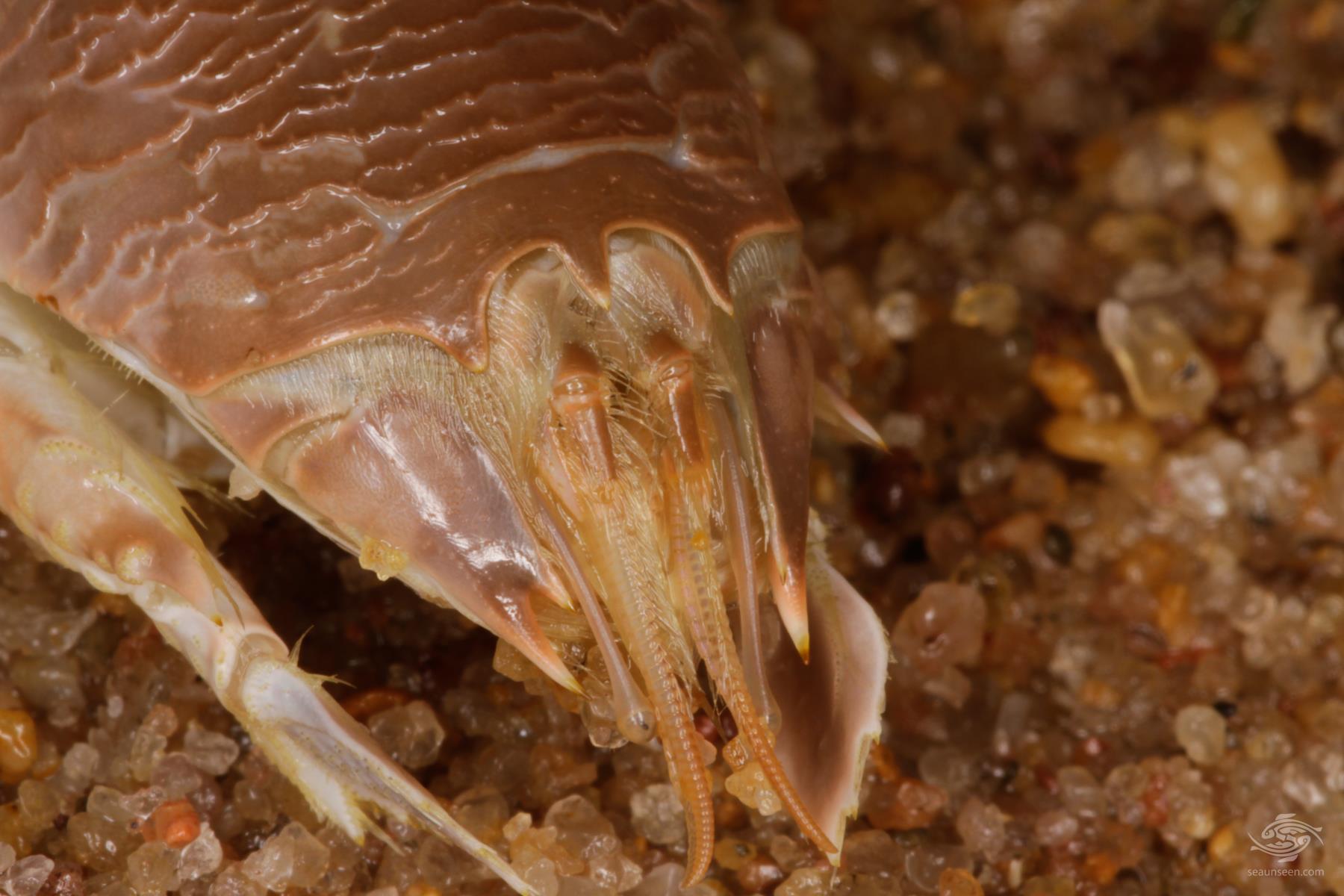 They have a short lifespan of around two to three years and some species can reproduce in the first year. Mating usually occurs in late spring or early summer. Males sense when a female is ready to lay eggs and congregate around the female for several days before the eggs are laid, sometimes attaching to the female. The males deposit sperm onto the female and the eggs are then laid and fertilized. A female can produce around 40000 eggs at a time. These are kept on the underside of the body under the telson and take around a month to develop. The eggs start off a bright orange color and as they near hatching they become a dark brown color. Once they hatch, larvae emerge and live as plankton and depending on the species can have a number of stages before morphing into adults and joining a colony on the beach. 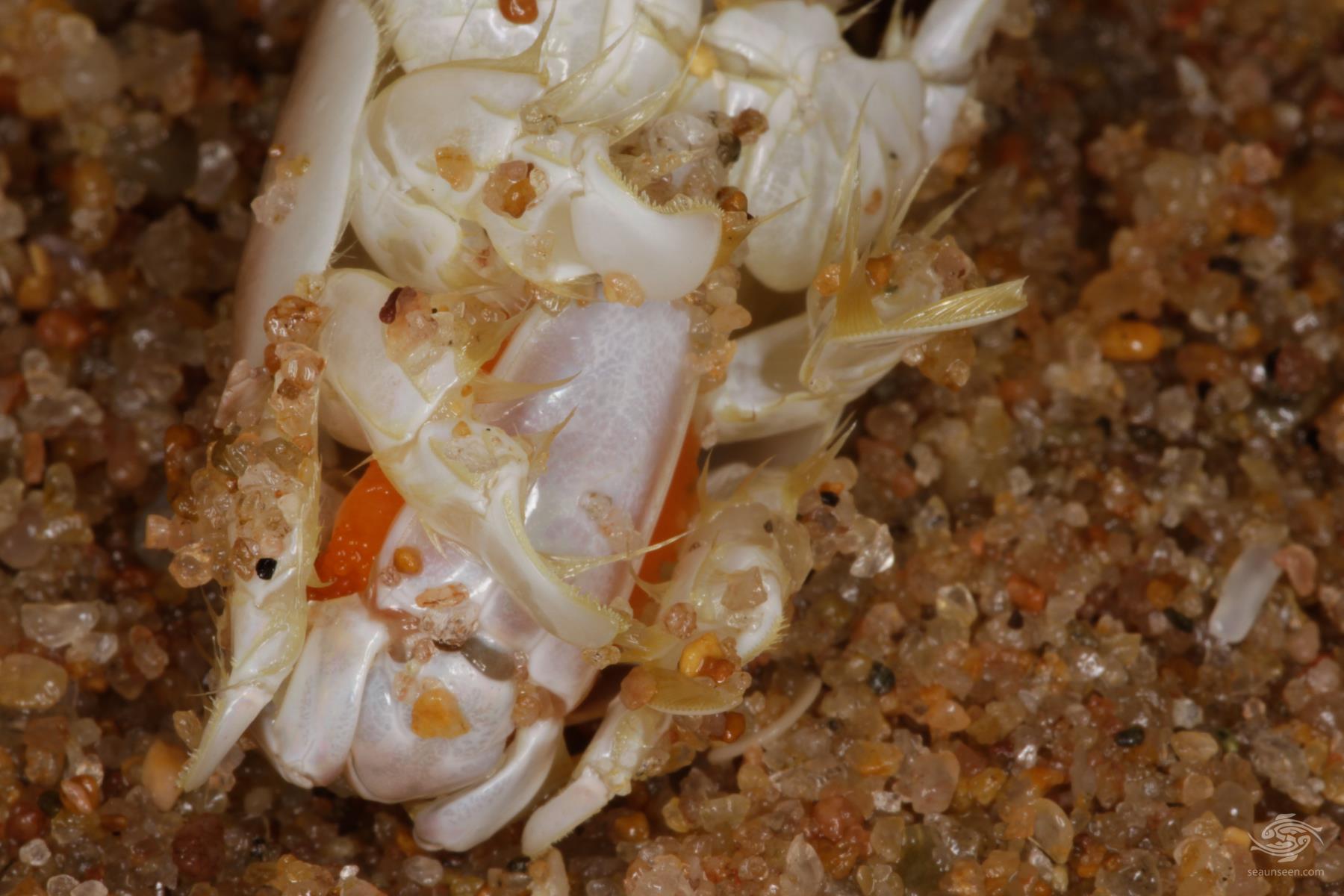 Some species of fish and birds prey on mole crabs and they are regarded as excellent bait by fishermen for certain species of fish. Because they make relatively easy prey for birds they are more active at night. Believe it or not they are fried and eaten as a delicacy in some parts of the world. 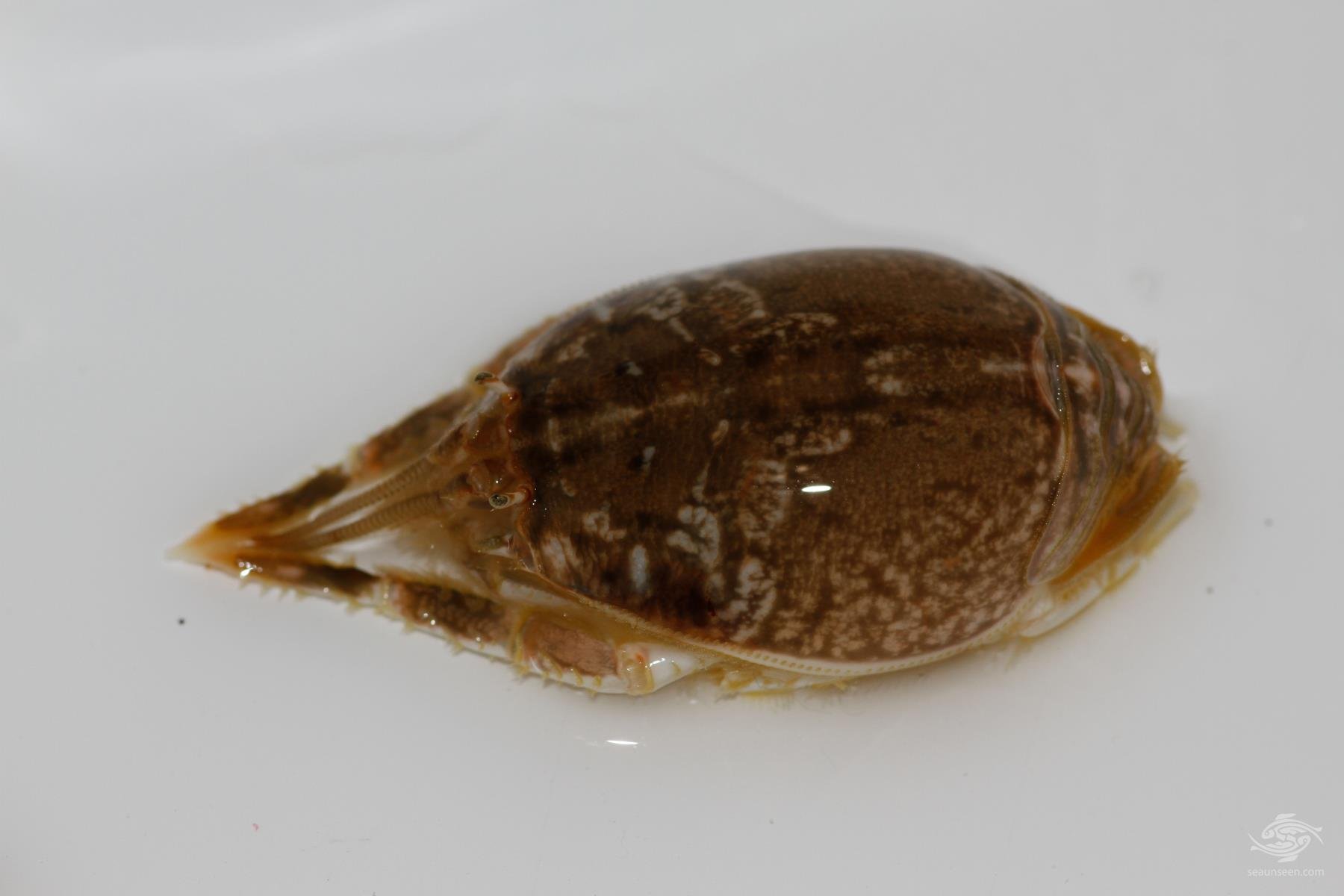 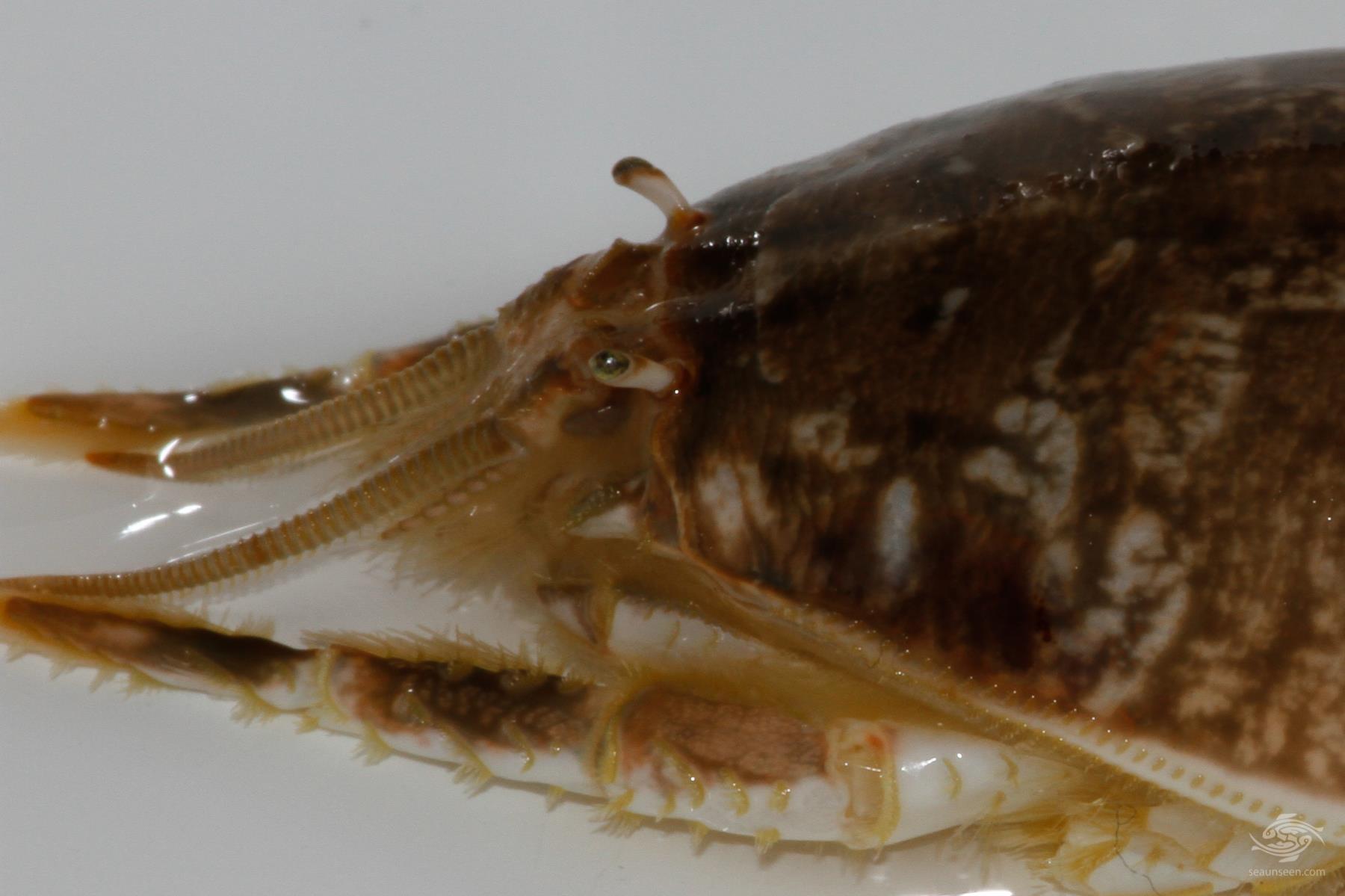 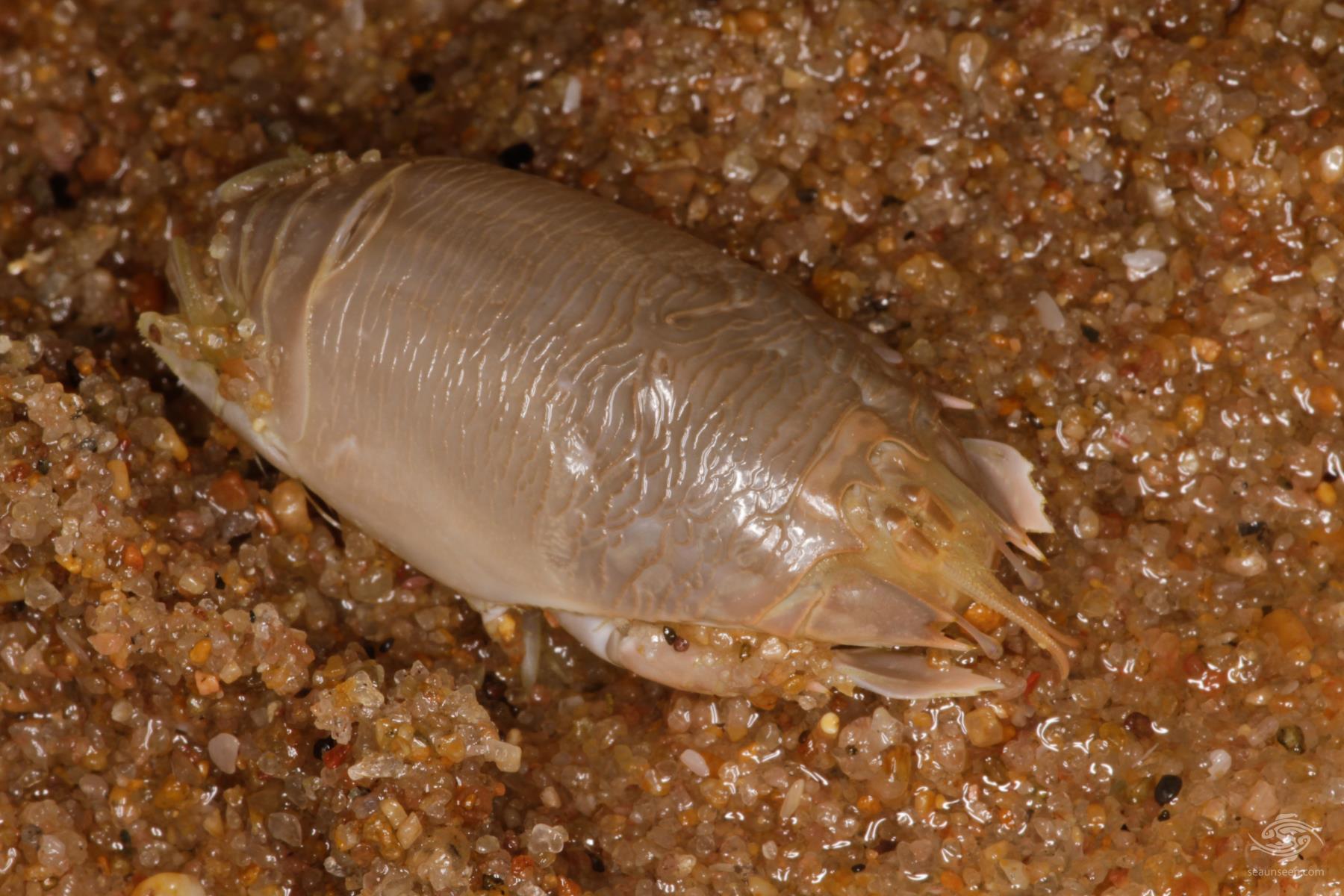 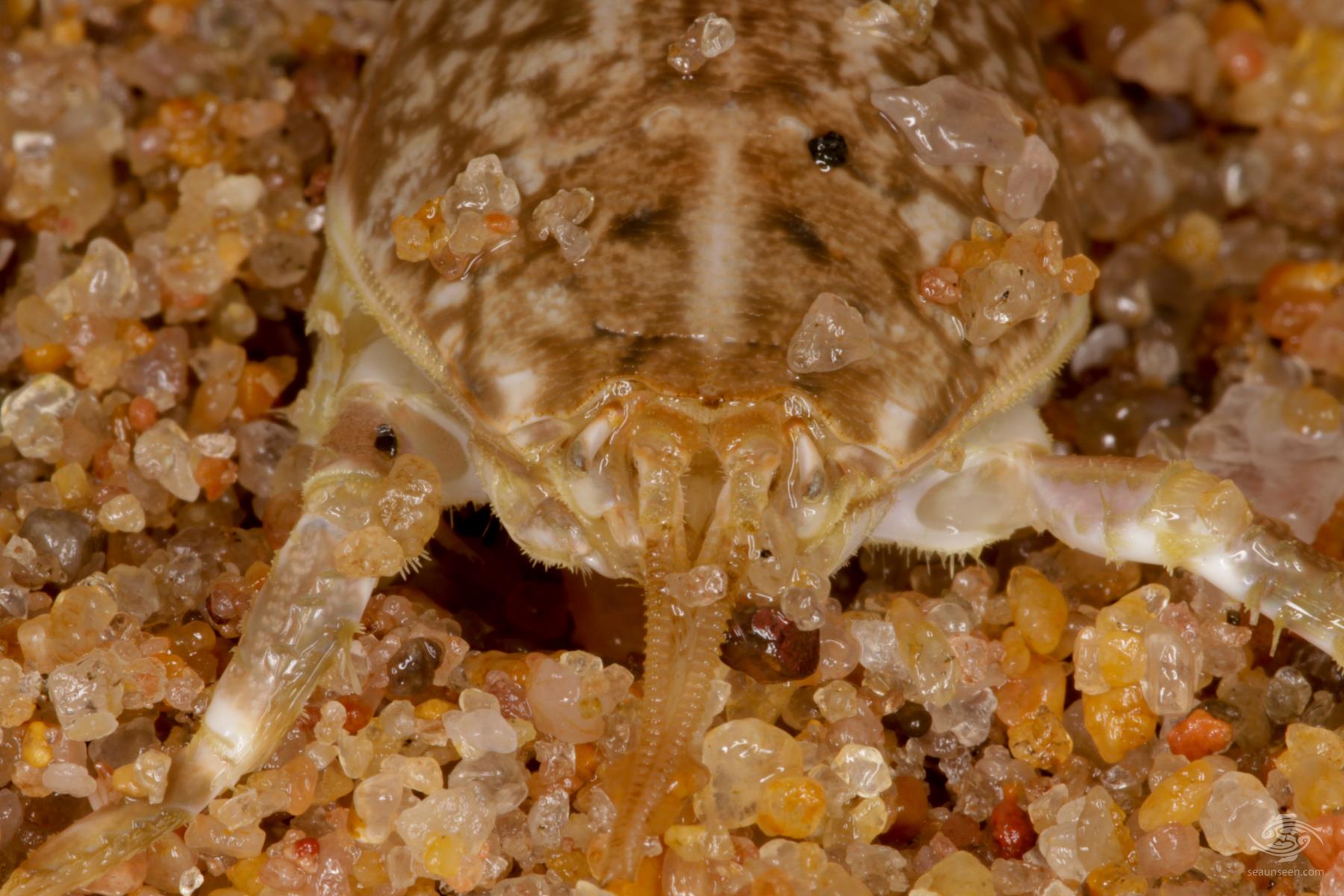