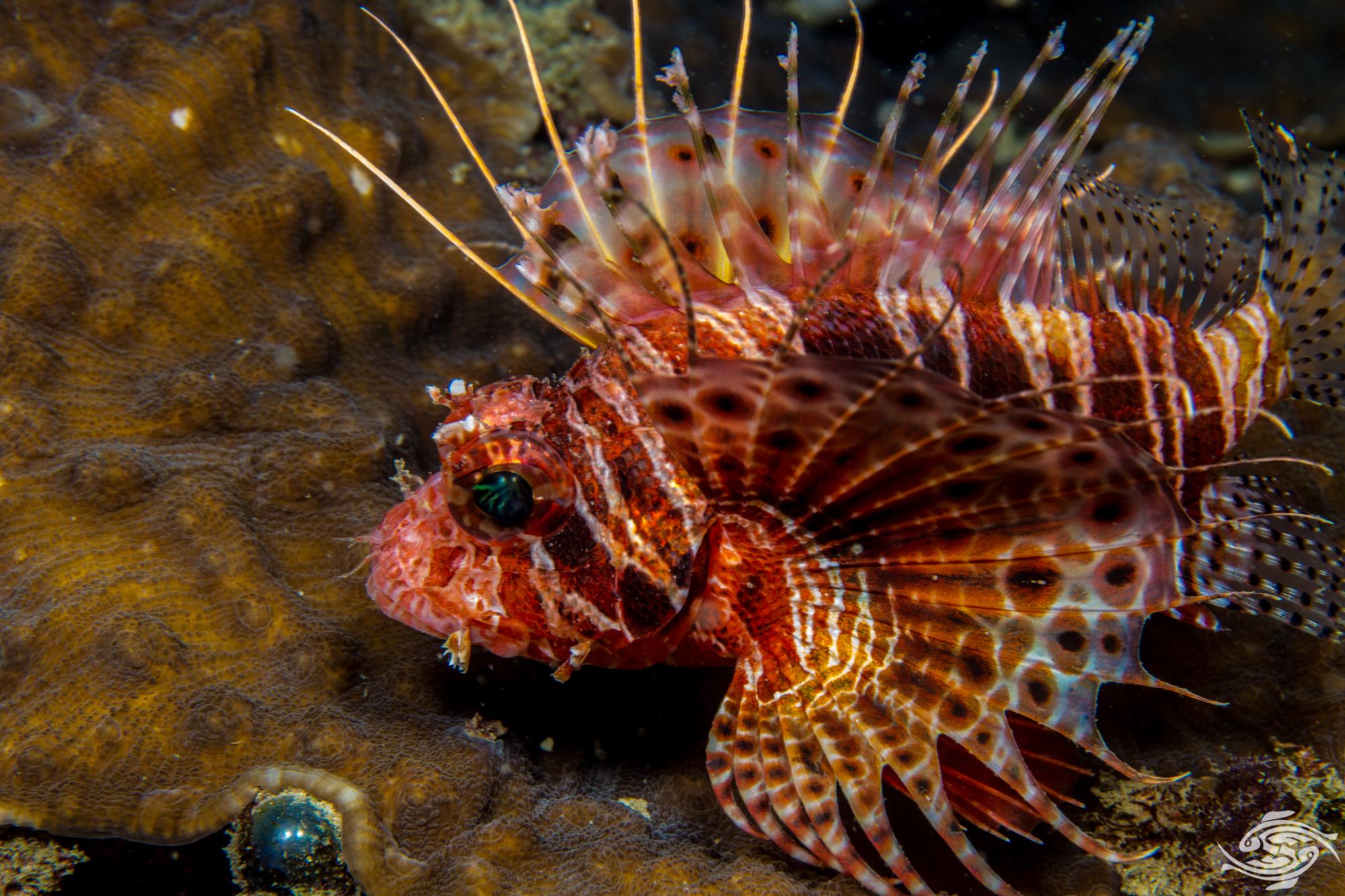 The Mombasa Lionfish (Pterois mombasae) is frequently misidentified by many people and there are many sites on the web that have information on the Mombasa Lionfish and an image of the Spotfin Lionfish (Pterois antennata). At a casual glance it is not easy to differentiate between the two. There are however some subtle differences that are easy to spot once one is aware of them. 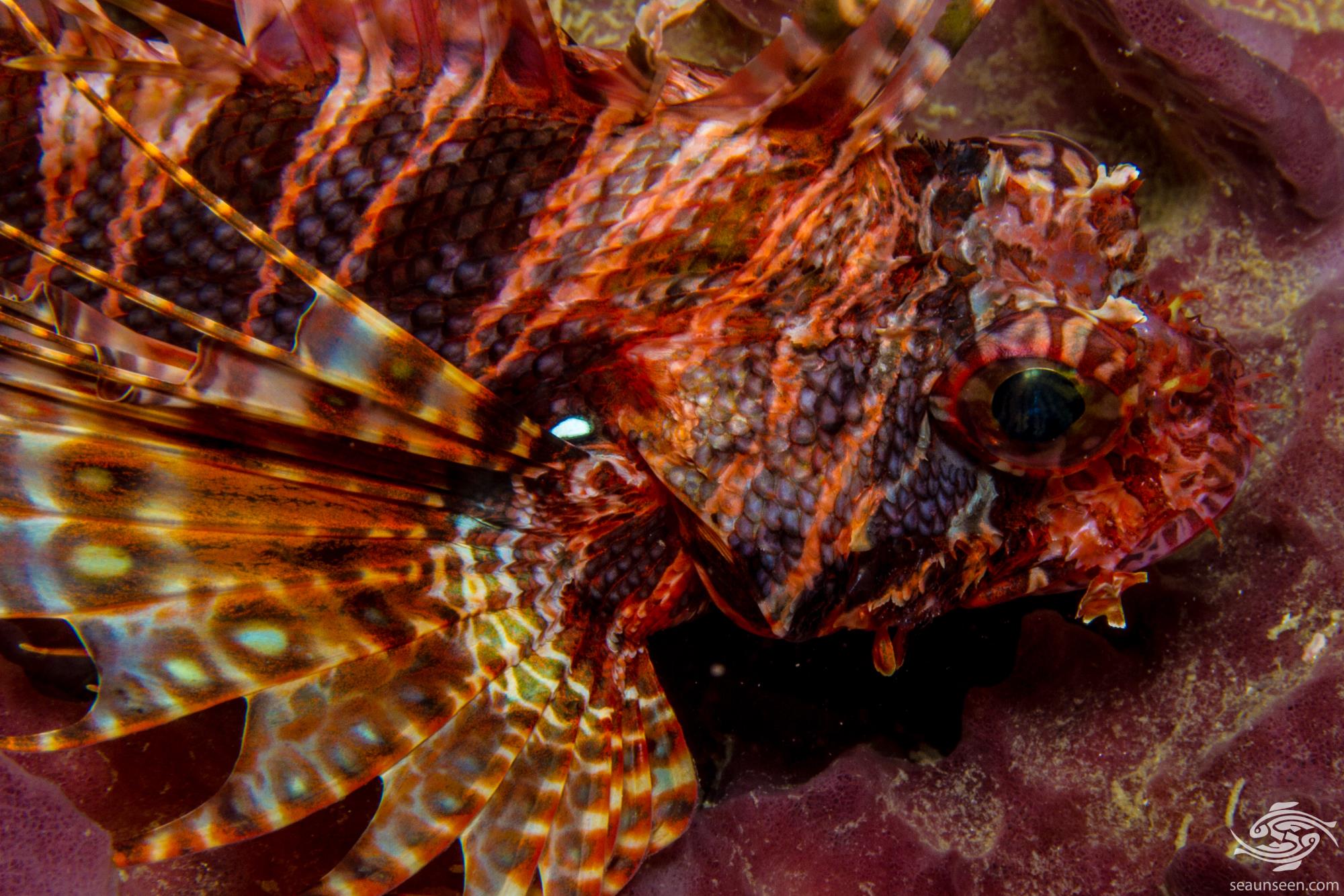 Certainly the easiest way to differentiate in Tanzanian waters is to look at the pattern of dots on the pectoral fins particularly on the inside. If there is a single row of dots running across the fin and they are blue then it is a Spotfin Lionfish (as seen below) and not a Mombasa Lionfish. The patterns on the fin are very different. The spines are far longer as well. 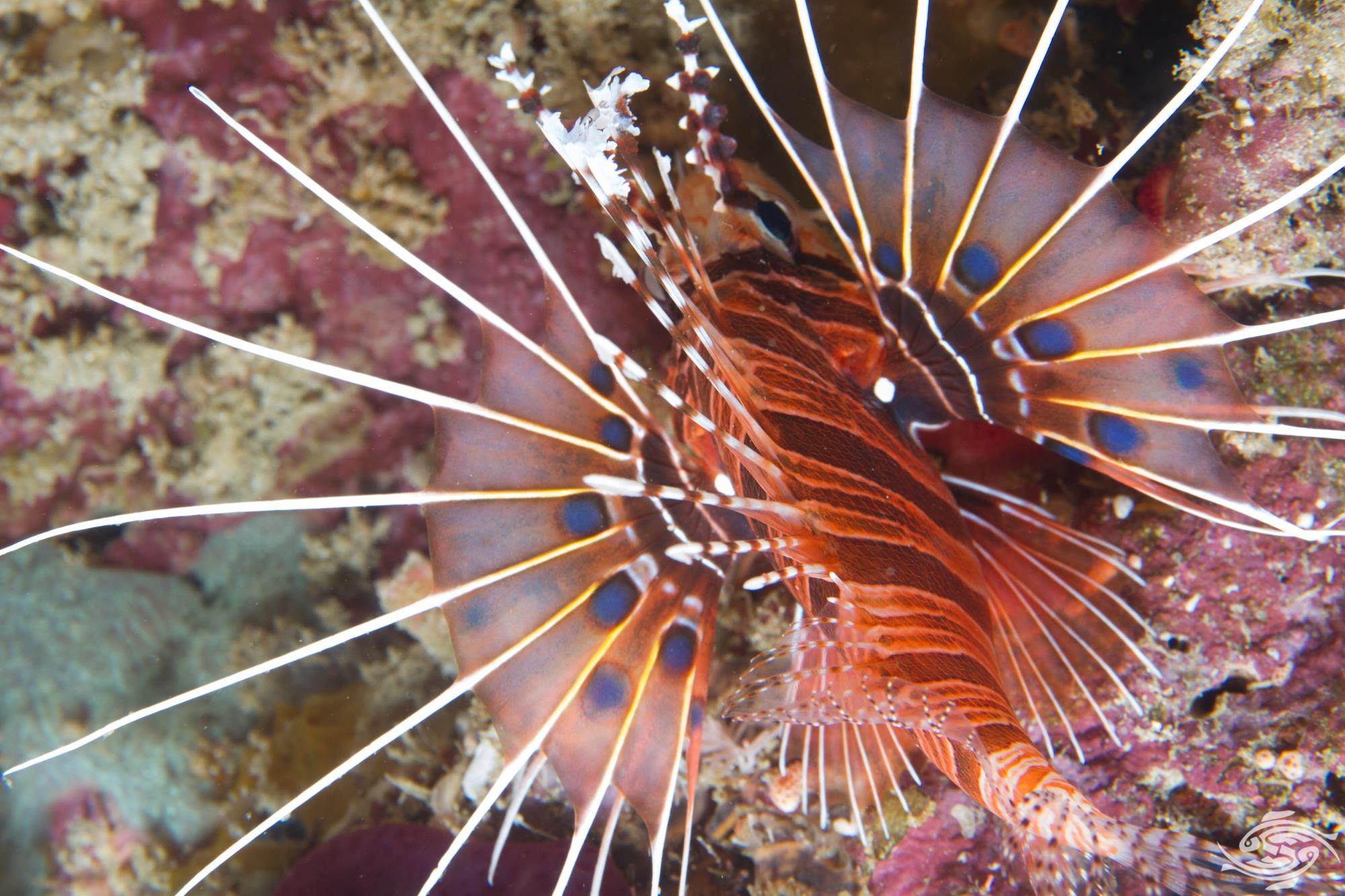 The Bar through the eye on the Spotfin Lionfish can be clearly seen below.  This is absent on the Mombasa Lionfish. The eye is not as bulbous on the Spotfin. 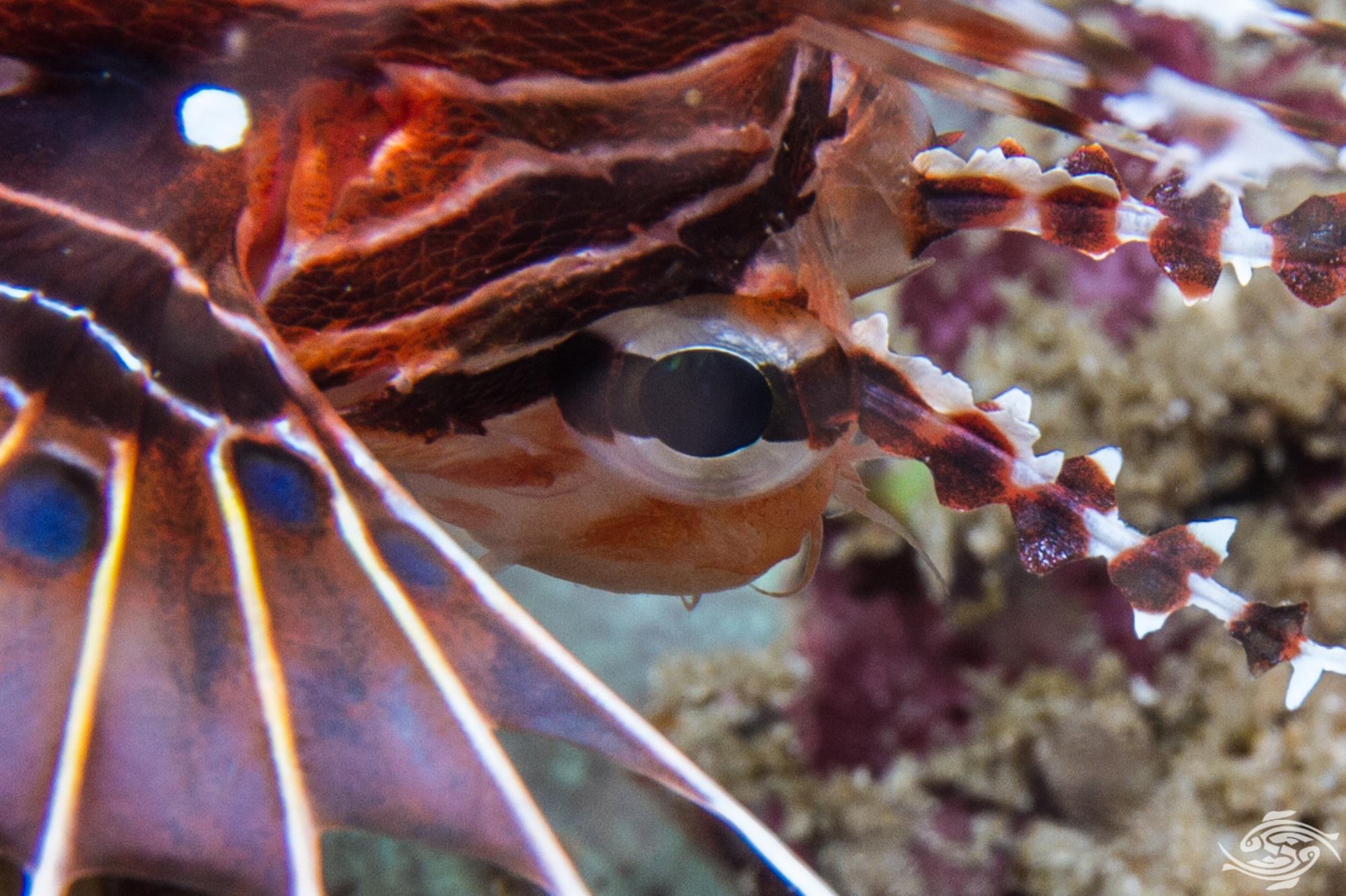 It is quite easy to differentiate when compared to the Mombasa Lionfish pictured below. Despite seeing many Mombasa Lionfish in the wild , we have yet to see a specimen with prominent antennae above the eye. 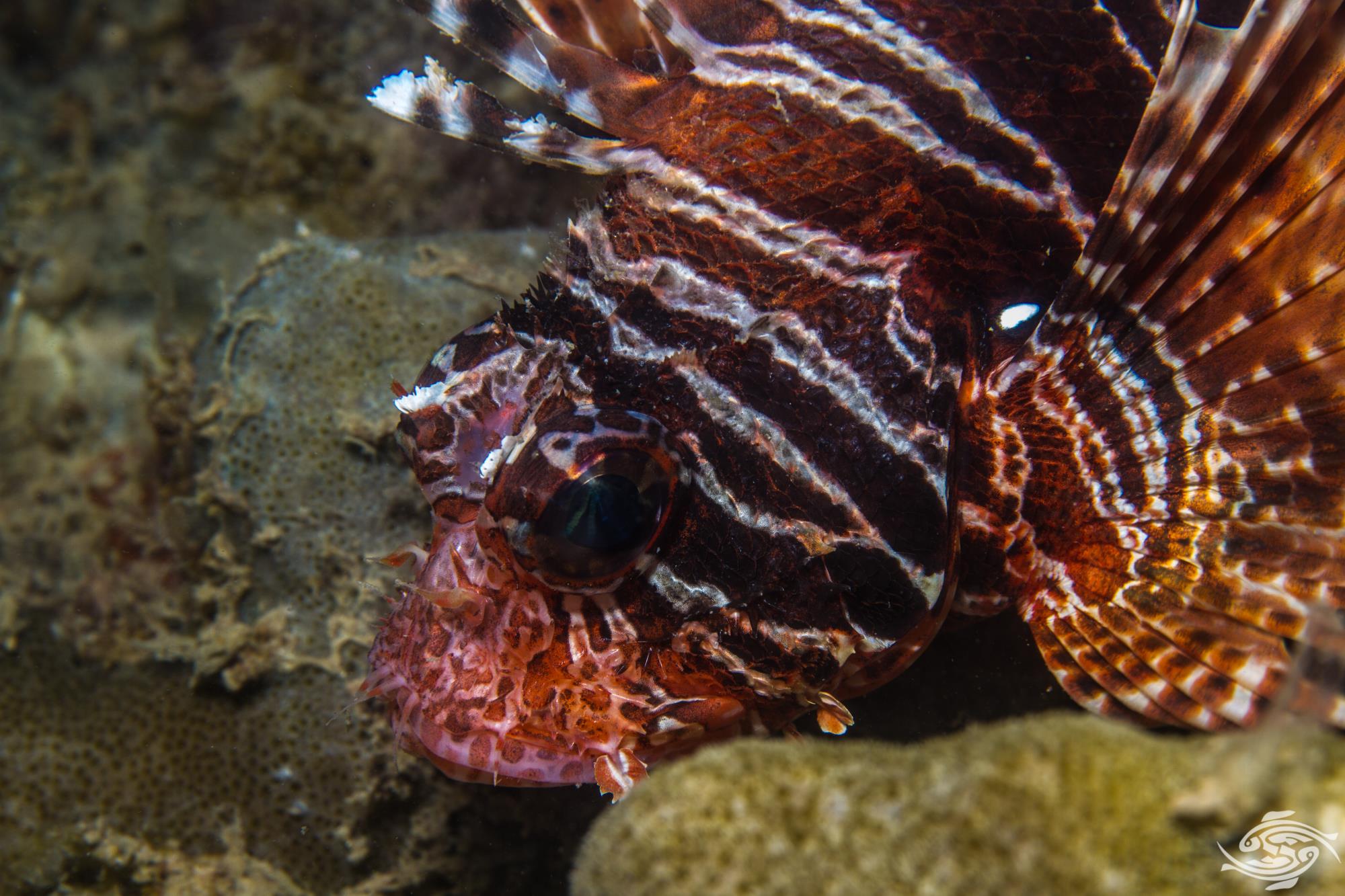 The Mombasa Lionfish has at least two or three rows of spots on the pectoral fin as can be seen below. These have all been red, orange, white or brown in the numerous specimens we have sighted in the wild. 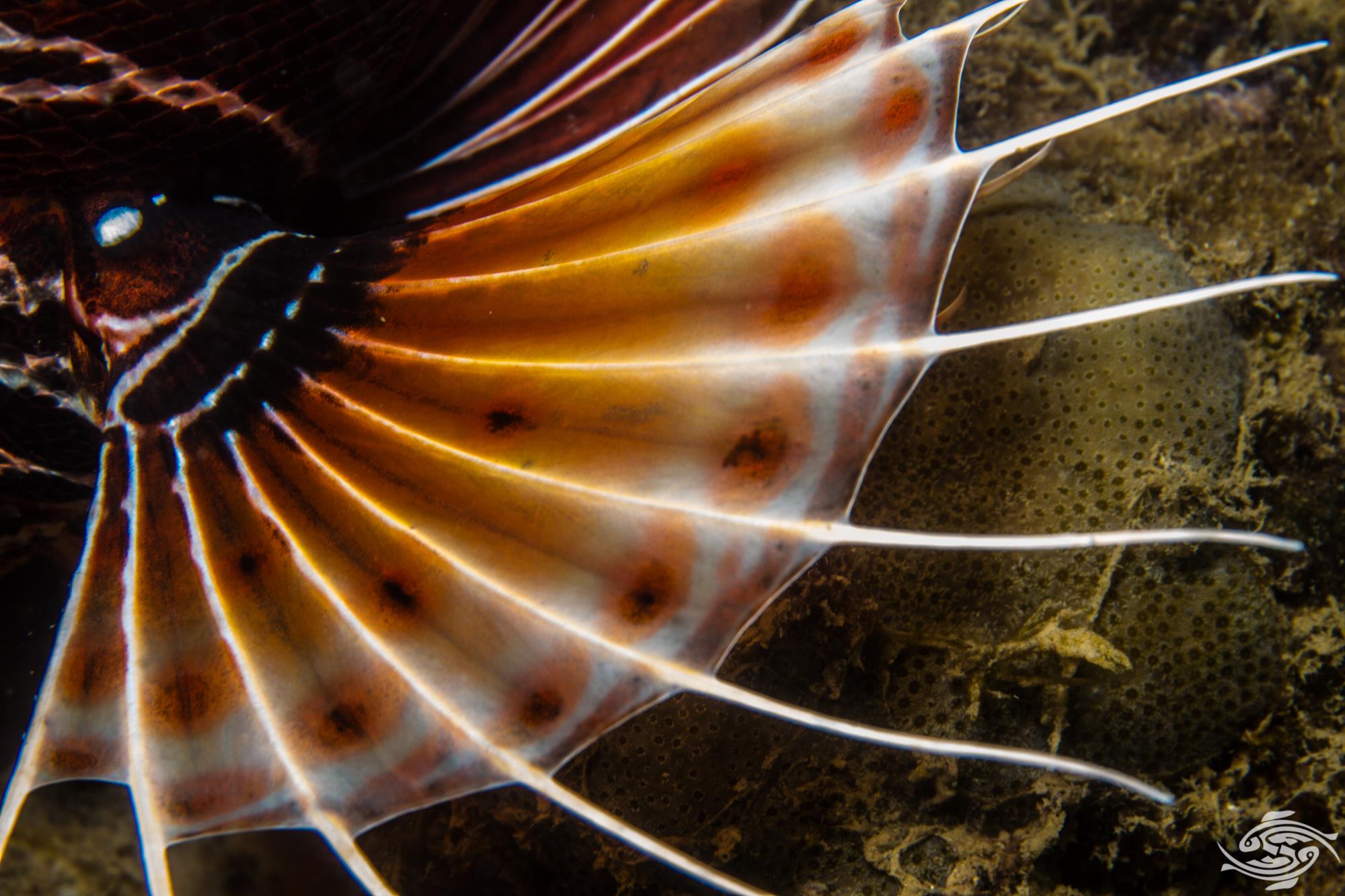 The extended rays of the pectoral fin are far longer on the Spotfin and the eye is markedly smaller and so far on every specimen we have checked in the wild, there is a bar running horizontally through the eye. The body is not as robust either. So blue spots on the pectoral fins and a bar through the eye mean that it is a Spotfin Lionfish (Pterois antennata). There are other differences but those are the easy ones to pick out. 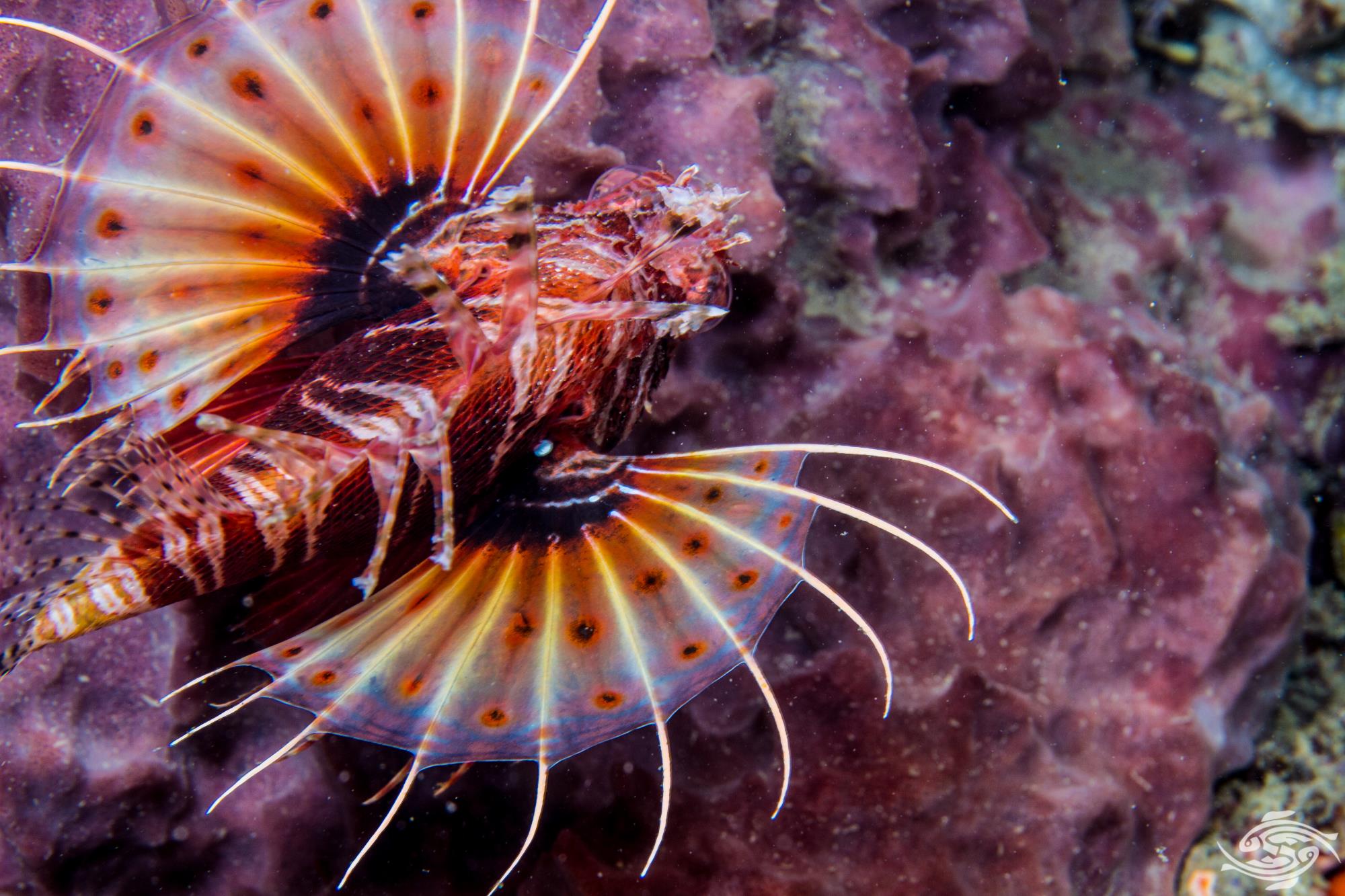 Mombasa Lionfish grow up to 16 cm centimeters in length. The body background colour varies between red, orange or dark brown. Some specimens we have seen are a very dark brown and these seem to be sitting waiting for their cuticle to come off.  Lionfish change their skin cuticle every few weeks and are duller in colouration as they head for a cuticle change. 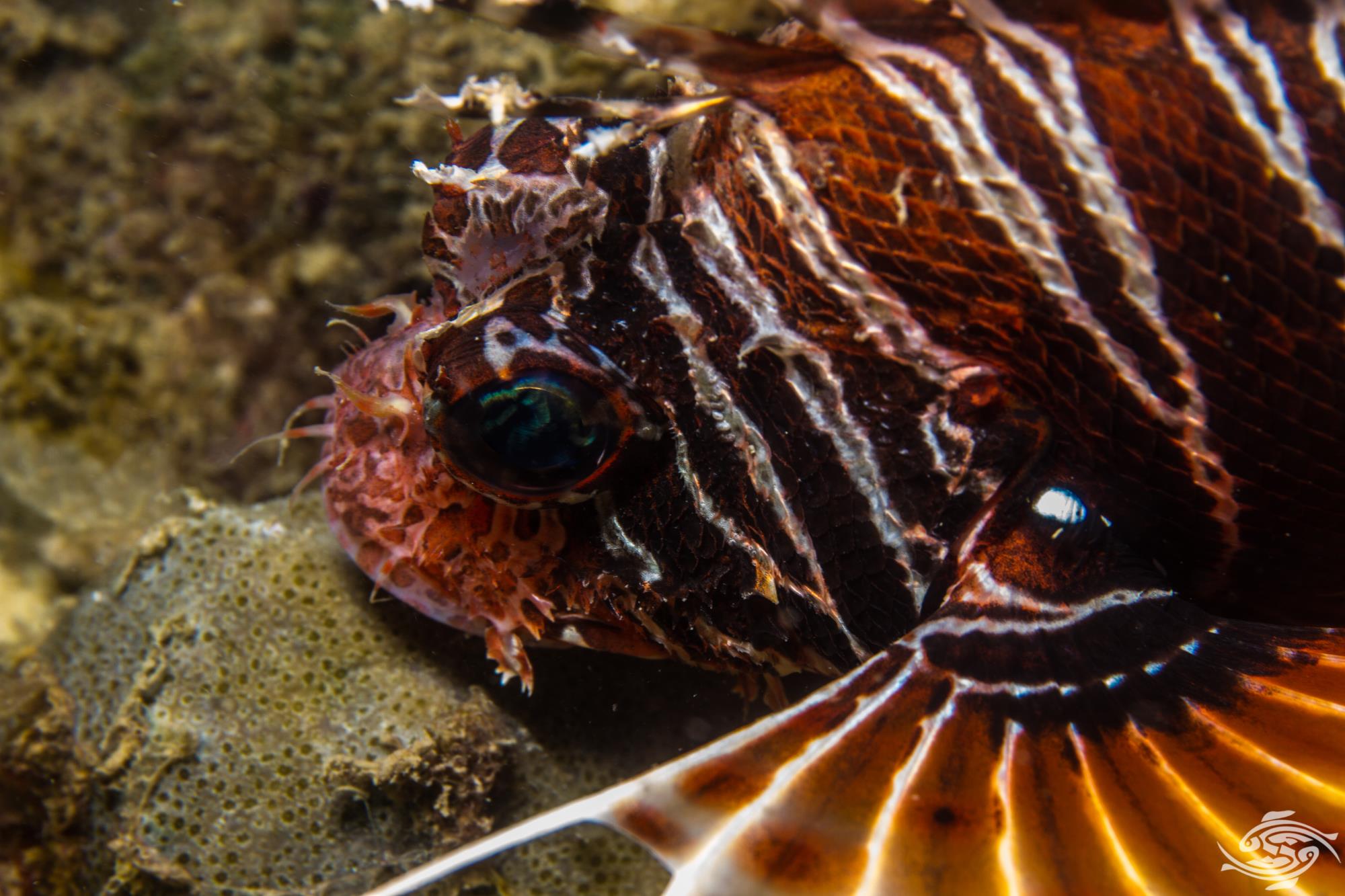 There are a series of thin horizontal whitish lines that tend to split into two lines toward the dorsal area. Bright colours in the sea generally equate to poisonous and they have a series of poison glands in their dorsal fins.

The lacy patterns on their eyes in the images are a reflection from the back of the iris. They have good night vision. It is worth noting that we have not seen a Mombasa Lionfish in the wild with appendages above the eye. This could just be coincidence however. 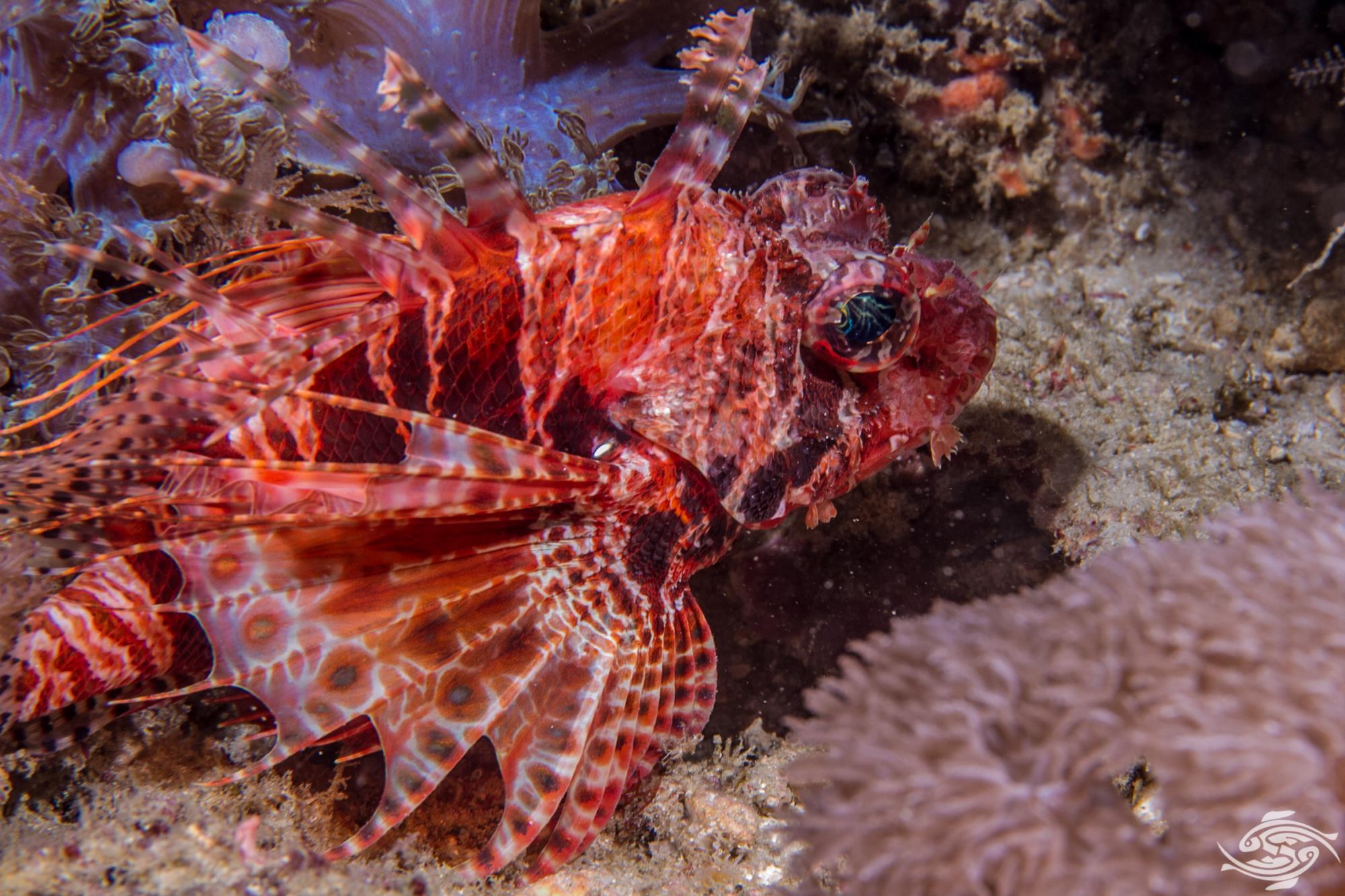 The Mombasa Lionfish are generally easy to approach and are usually seen sitting in the open alongside some type of feature or in-between two stones or pieces of coral. The head is often partially under a small overhang with the body facing outwards. This makes it very difficult to photograph them. If they feel uncomfortable they will annoyingly put their head even further under the overhang.  They hardly ever decide to swim off and once their head is under cover they sit there and studiously ignore the diver. 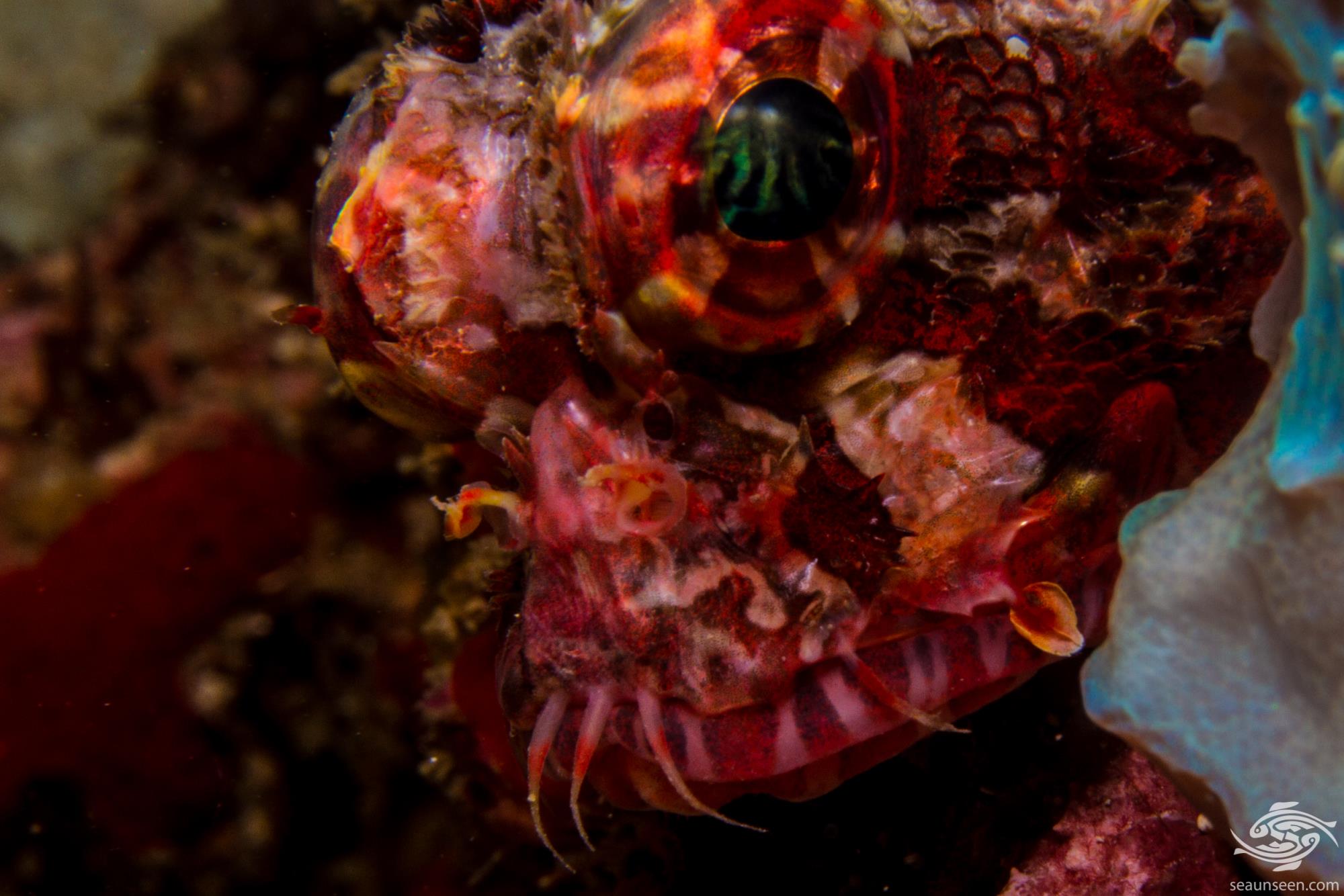 They are usually seen solitary but occasionally they are seen in small groups of up to three fish which appear to be interacting in some way or the other. On one occasion two of the group were stationary and the third was swimming around the other two. These groups are usually seen in spring and early summer so the behavior may be mating related.

There definitely seem to be greater numbers of the Mombasa Lionfish on the shallower reefs above 12 meters and they are sometimes seen on predominantly sandy areas with small bommies on them which concentrate potential prey. 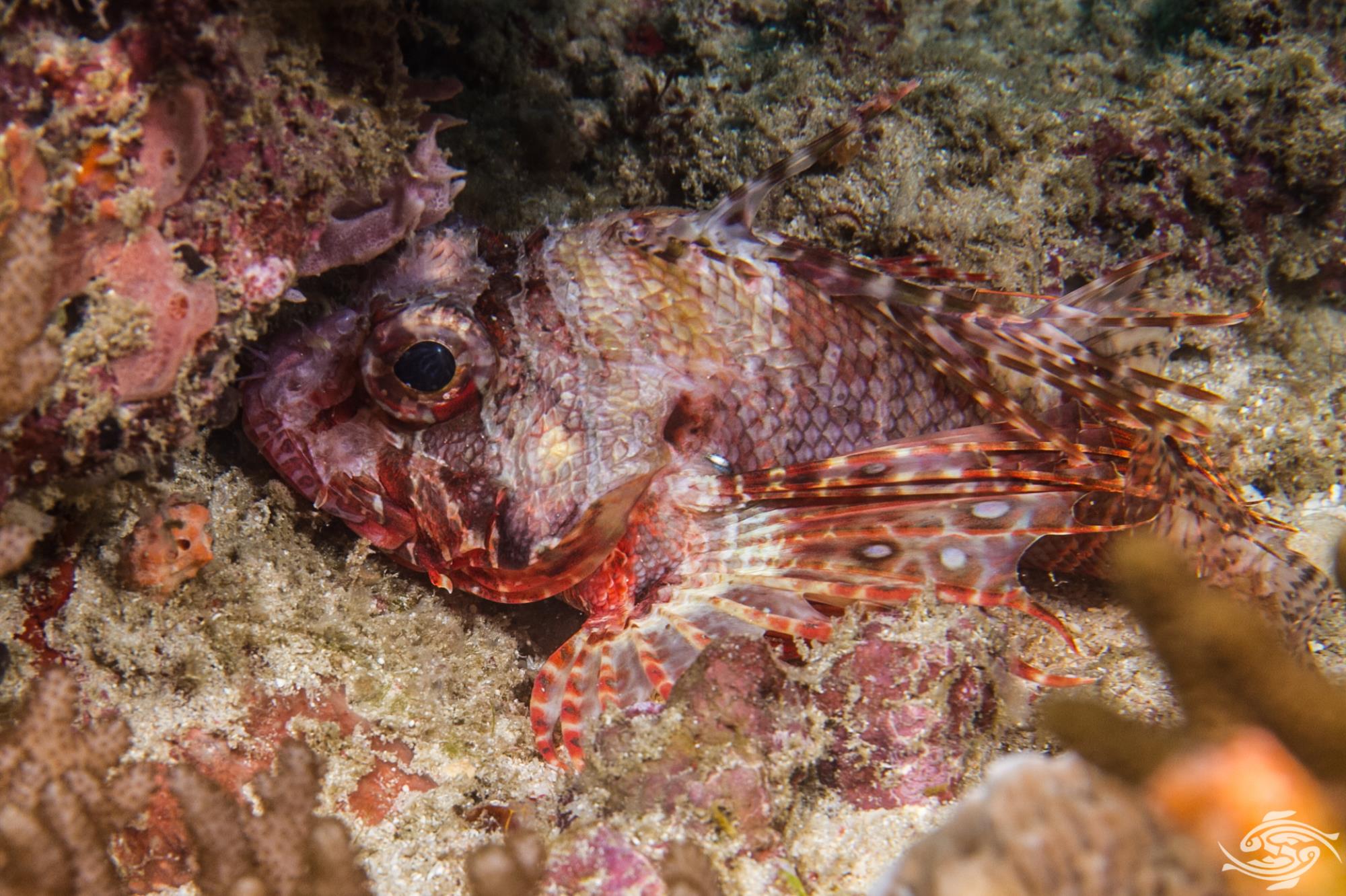 Mombasa Lionfish are found across the West Indian ocean, all the way up the East coast of Africa to the Red sea and are usually found on reef tops from between 12 meters to 20 meters. We have never seen them deeper or shallower than these depths. We have also never seen them out on night dives whereas we have seen most other species of Lionfish out on a full moon. 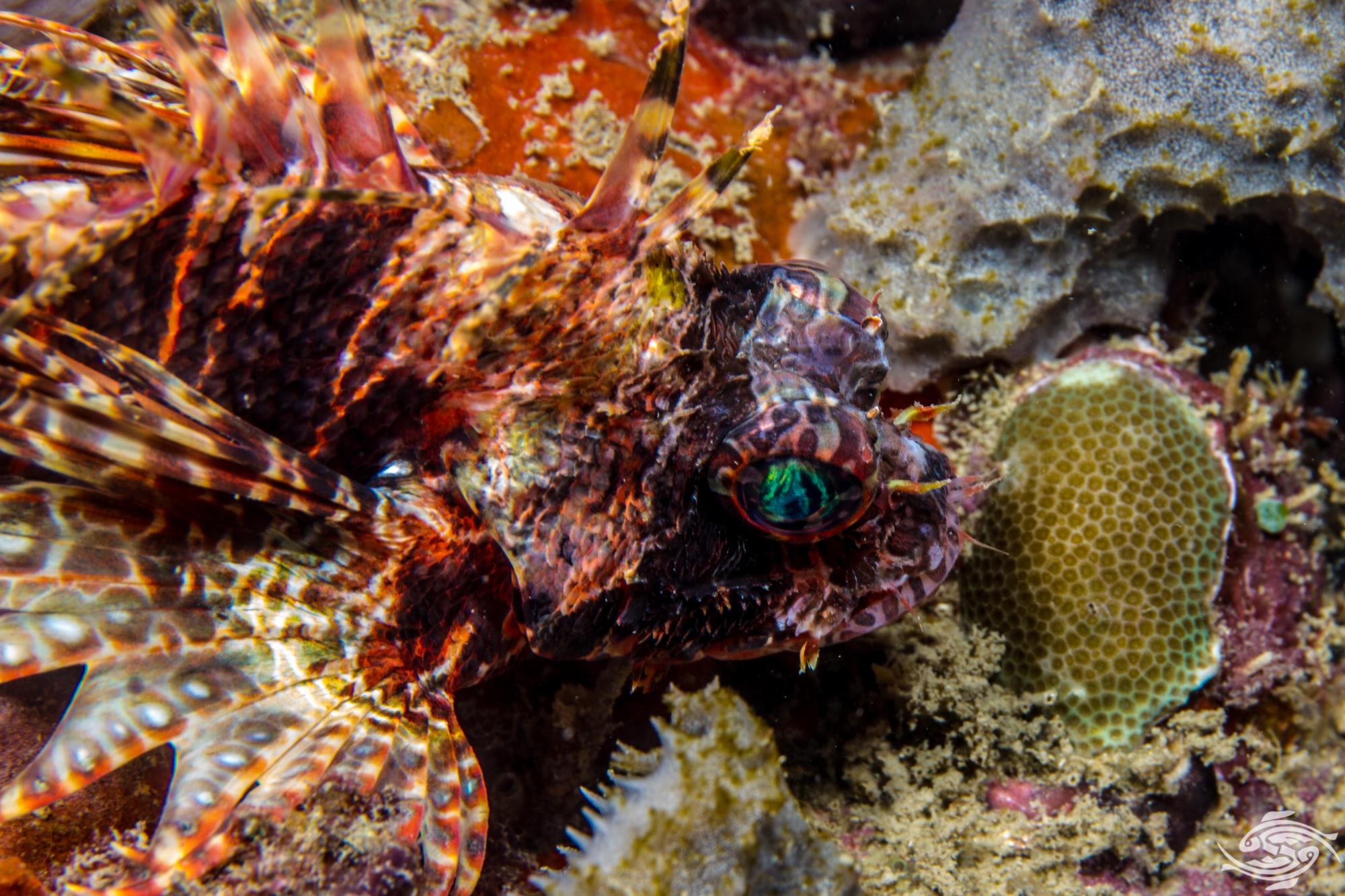 Mombasa Lionfish prey on small fishes and crustaceans and pretty much anything that fits in their mouth. They use their proportionally large mouths to create a vacuum and suck in and swallow the prey. 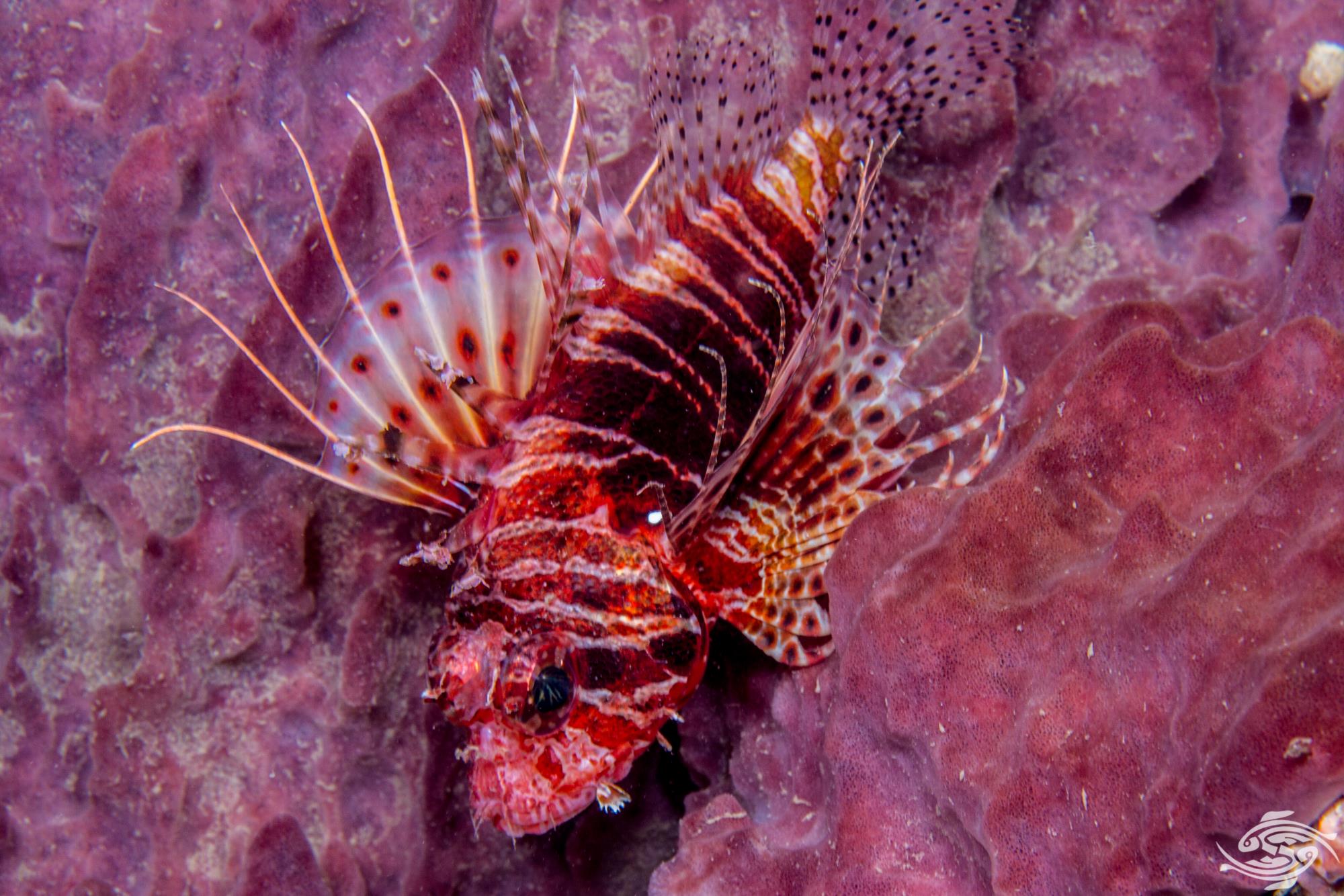 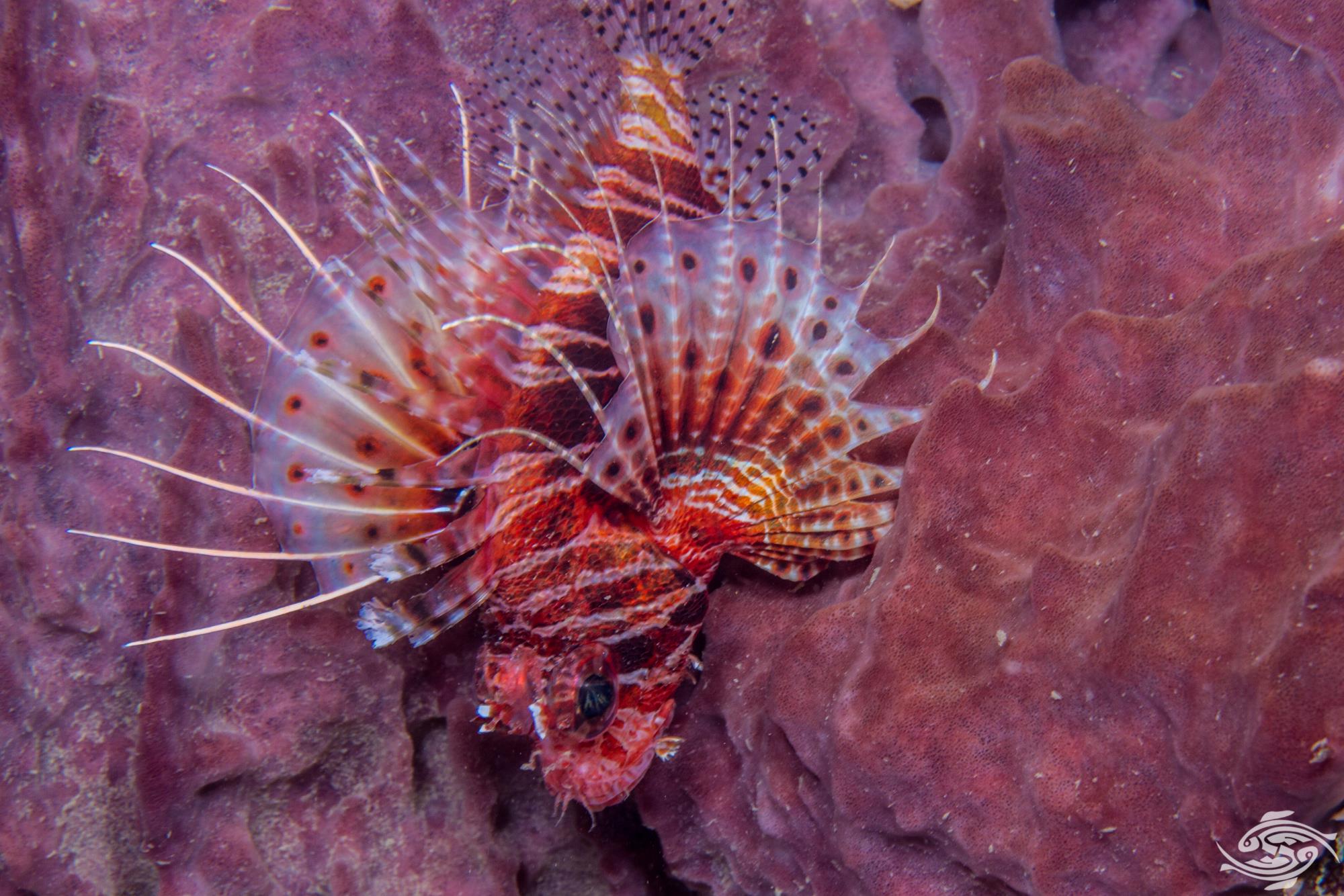 Mombasa Lionfish are kept by some collectors and make an attractive feature in the right type of aquarium. They will eat anything that fits in their mouths and will occasionally try their luck with things that will not fit in if they are hungry enough. As a consequence care has to be taken in choosing their tank mates. They are relatively easy to get across onto prepared foods. 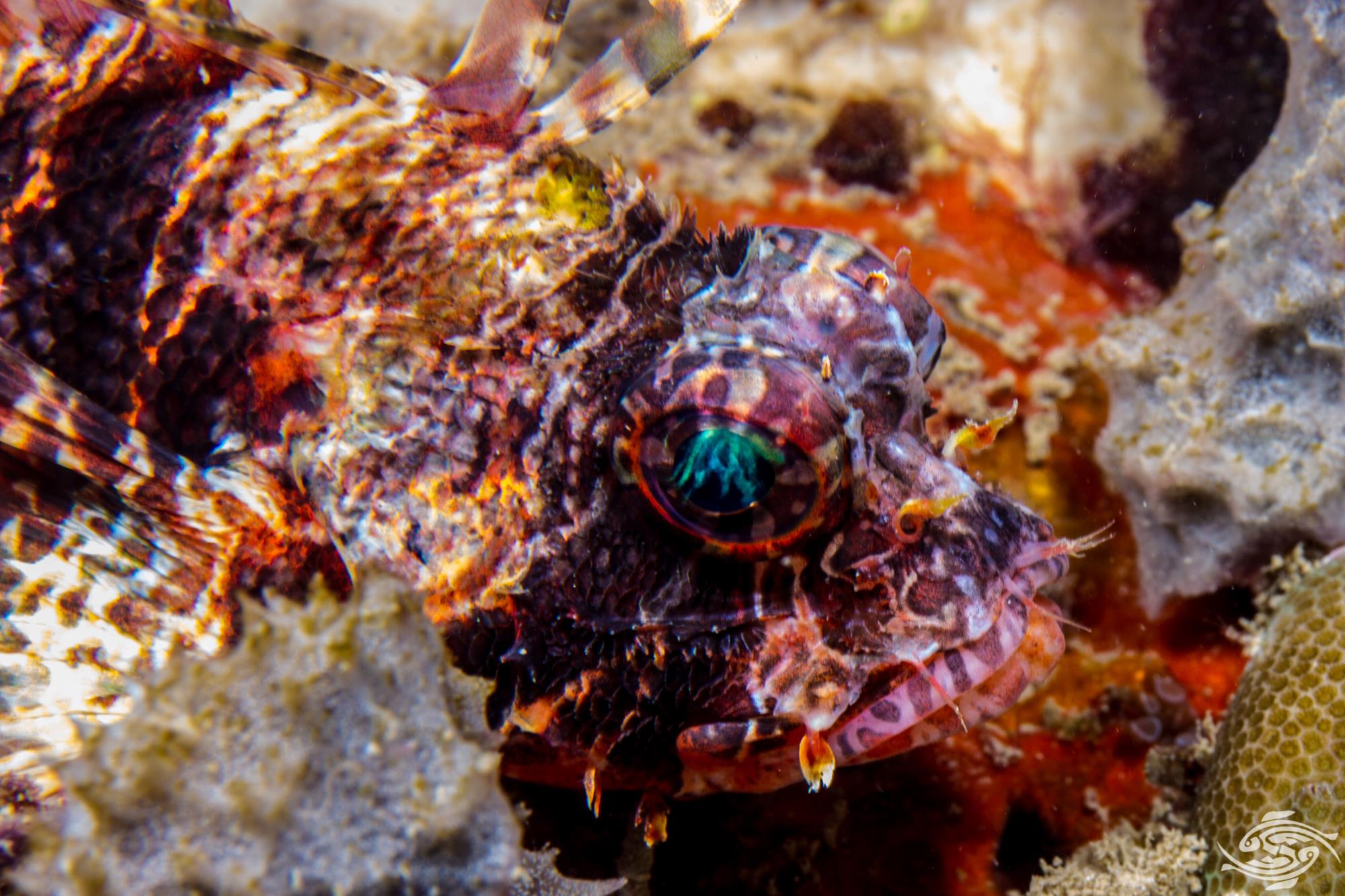