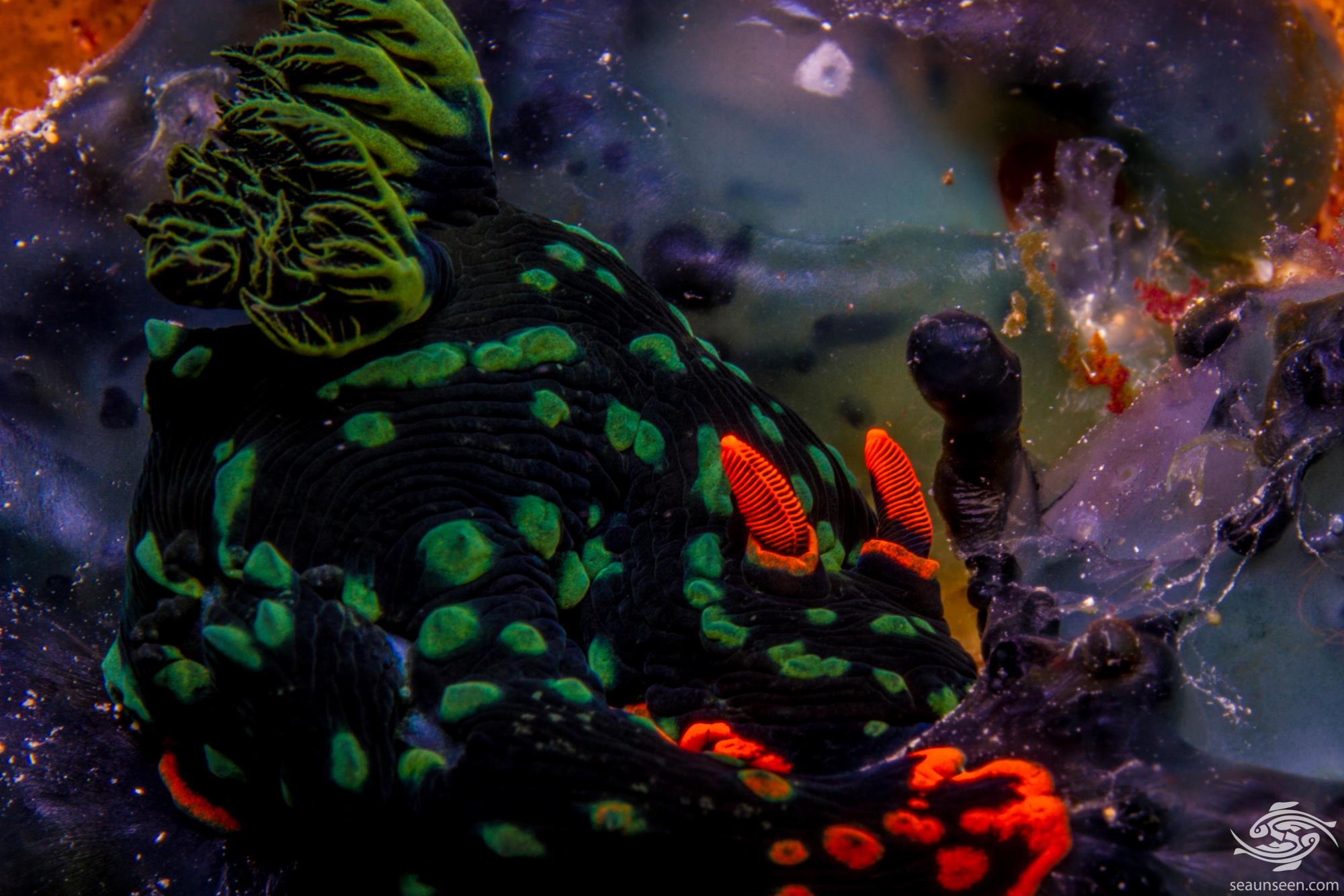 The Nembrotha kubaryana, also known as the Variable Neon Nudibranch or the Dusky Nembrotha, is not that common in the waters around Dar es Salaam in Tanzania. They are dorid nudibranchs, marine gastropod mollusks.

Some of the specimens have seen have had extremely vivid coloring and others have been markedly duller. There was at one stage a question mark over the classification of this species and whether it should be called N. kubaryana or N. nigerrima but it seems that N. kubaryana has won out. 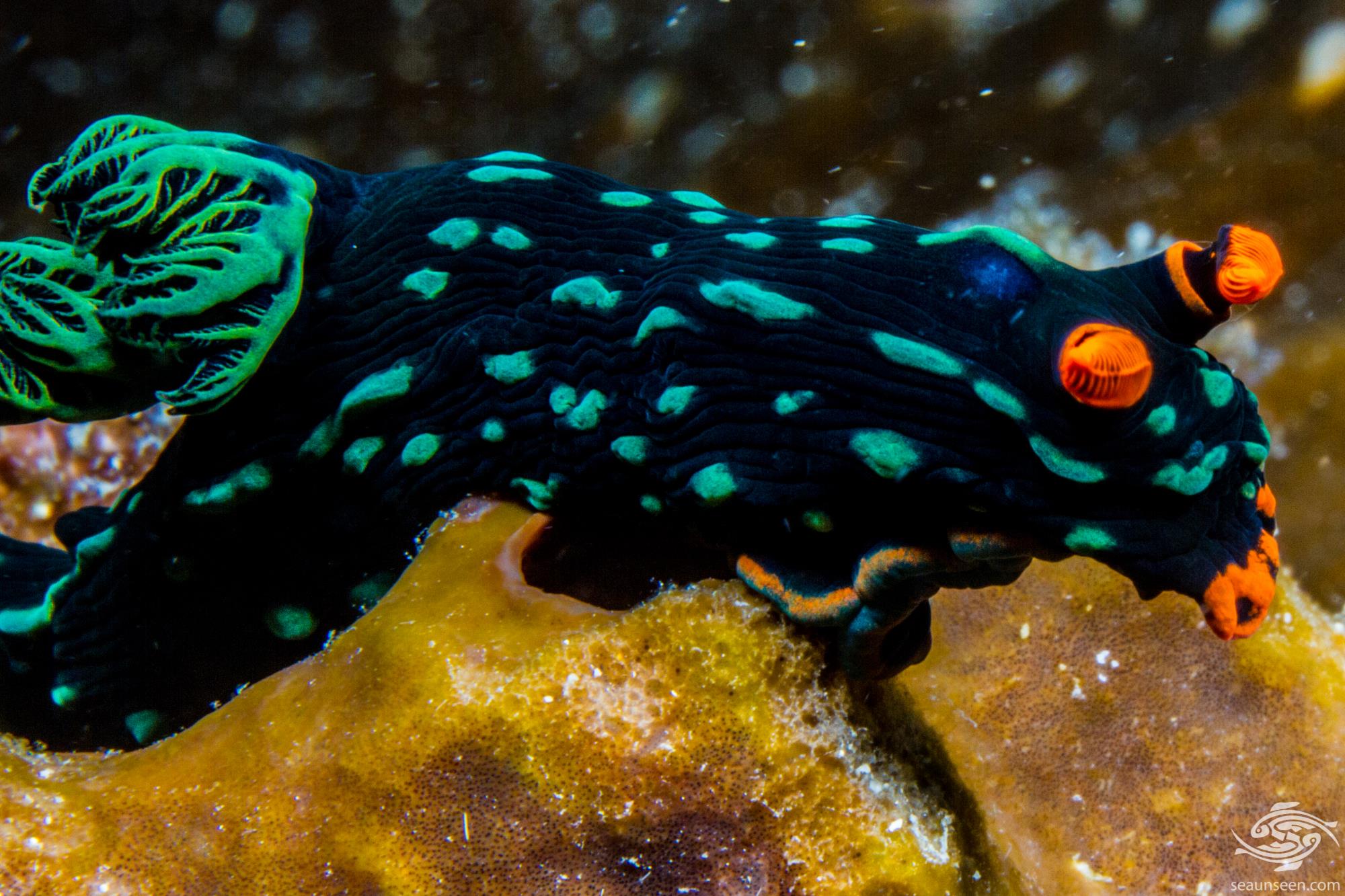 Nembrotha kubaryana have an elongated shape and a dark green-black background colour with a longitudinally wrinkled skin. There are a large number of  pustules with lighter green spots on them which may in some specimens form lines. The gills are green with black branches on them. The Rhinopores vary from orange to green. However all the specimens we have seen in Tanzania have had orange rhinopores with an orange ring around the sheath as seen below. They grow up to 120 mm in length but most are smaller in the 80 mm range. 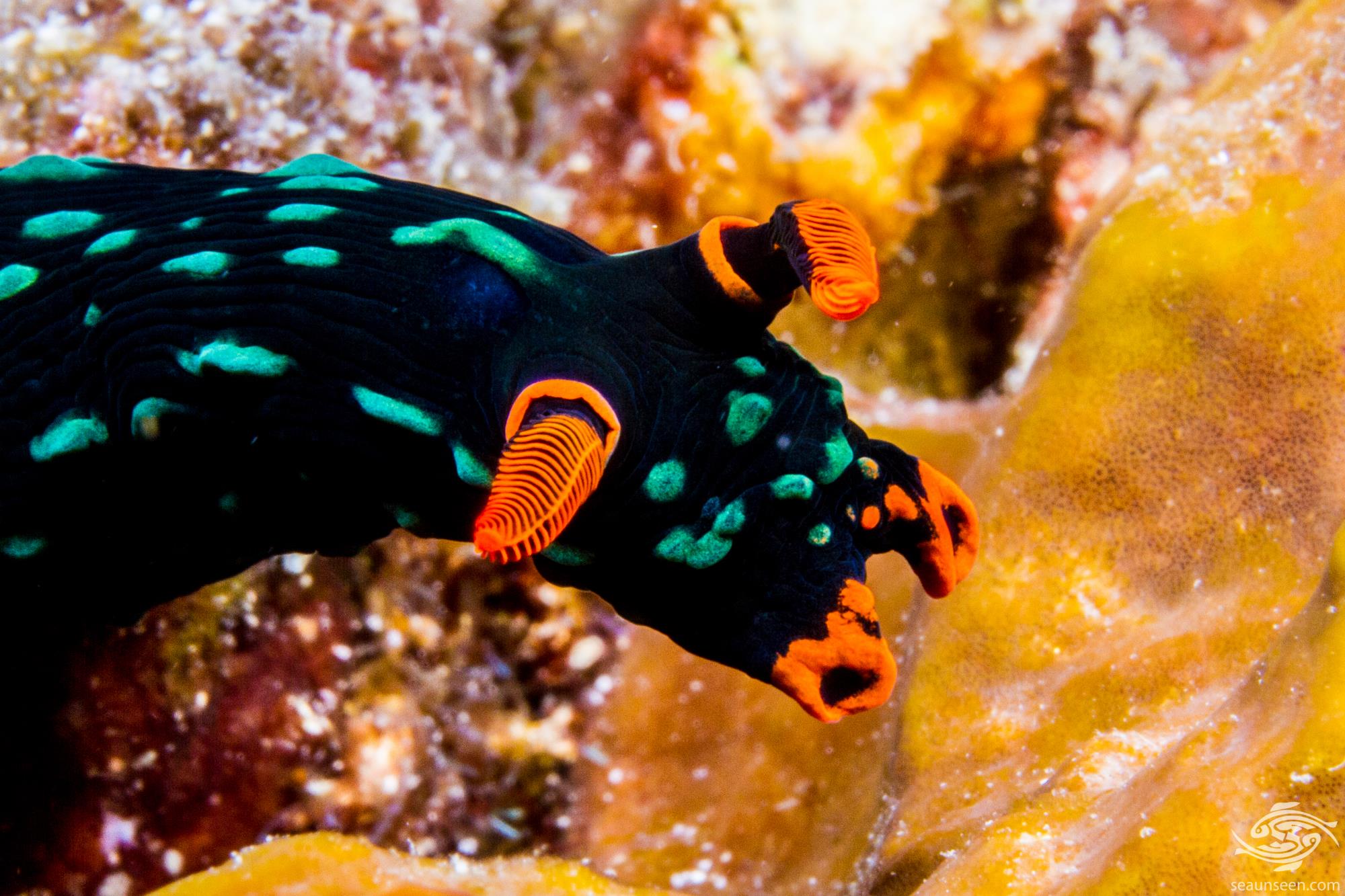 As their common name Variable Neon Nudibranch implies, the colours are variable and the one specimen in particular in this post had colours that neon aptly describe. The colours were so bright that they did not look real.  It was absolutely stunning to see in real life and the colours have not been enhanced. 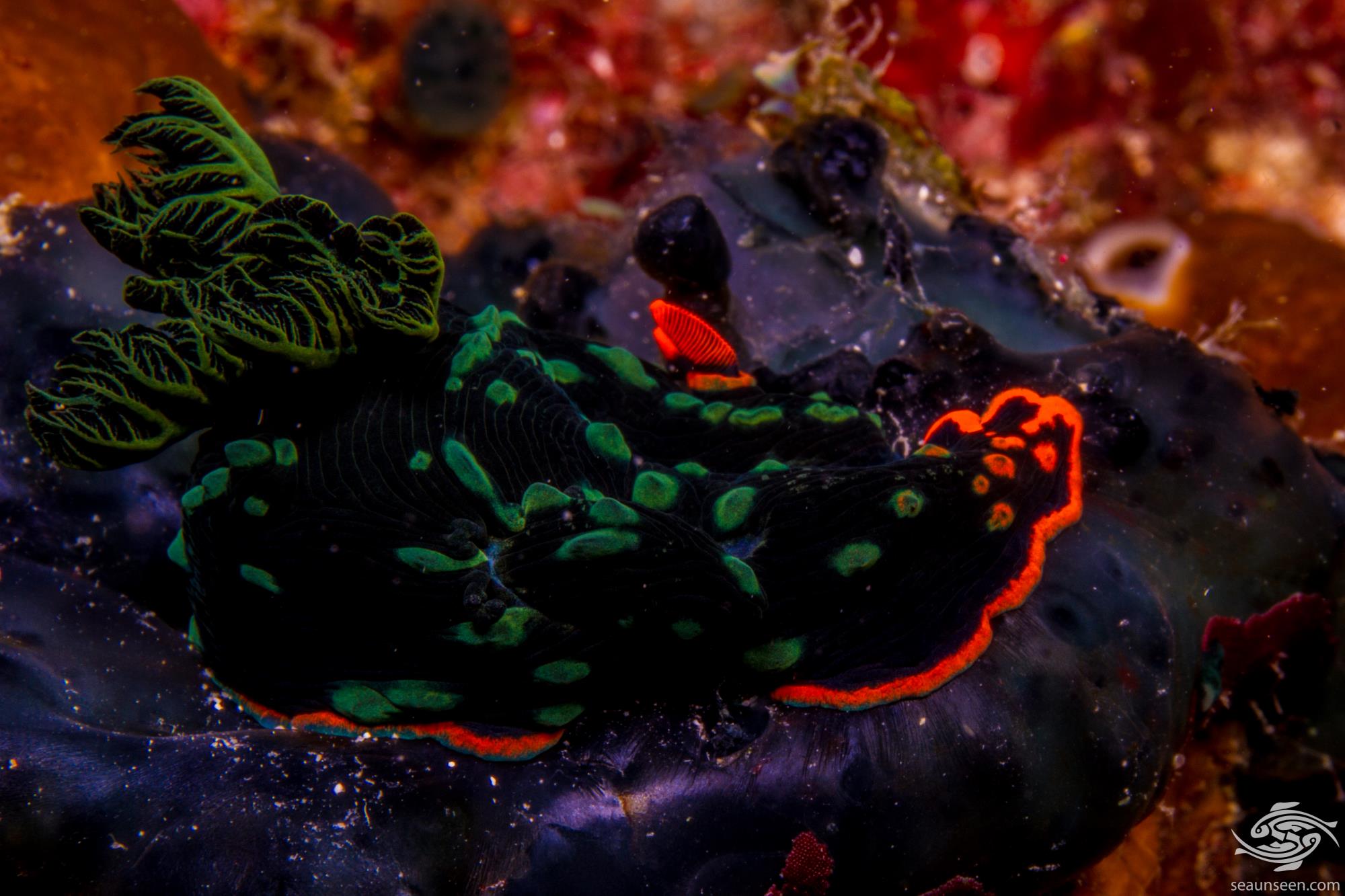 The Nembrotha kubaryana are usually seen on open reefs with a lot of ascidians on them. In Tanzania they seem more common between 12 to 15 meters in depth range. They absorb toxins from the ascidians and these are secreted when they feel threatened. 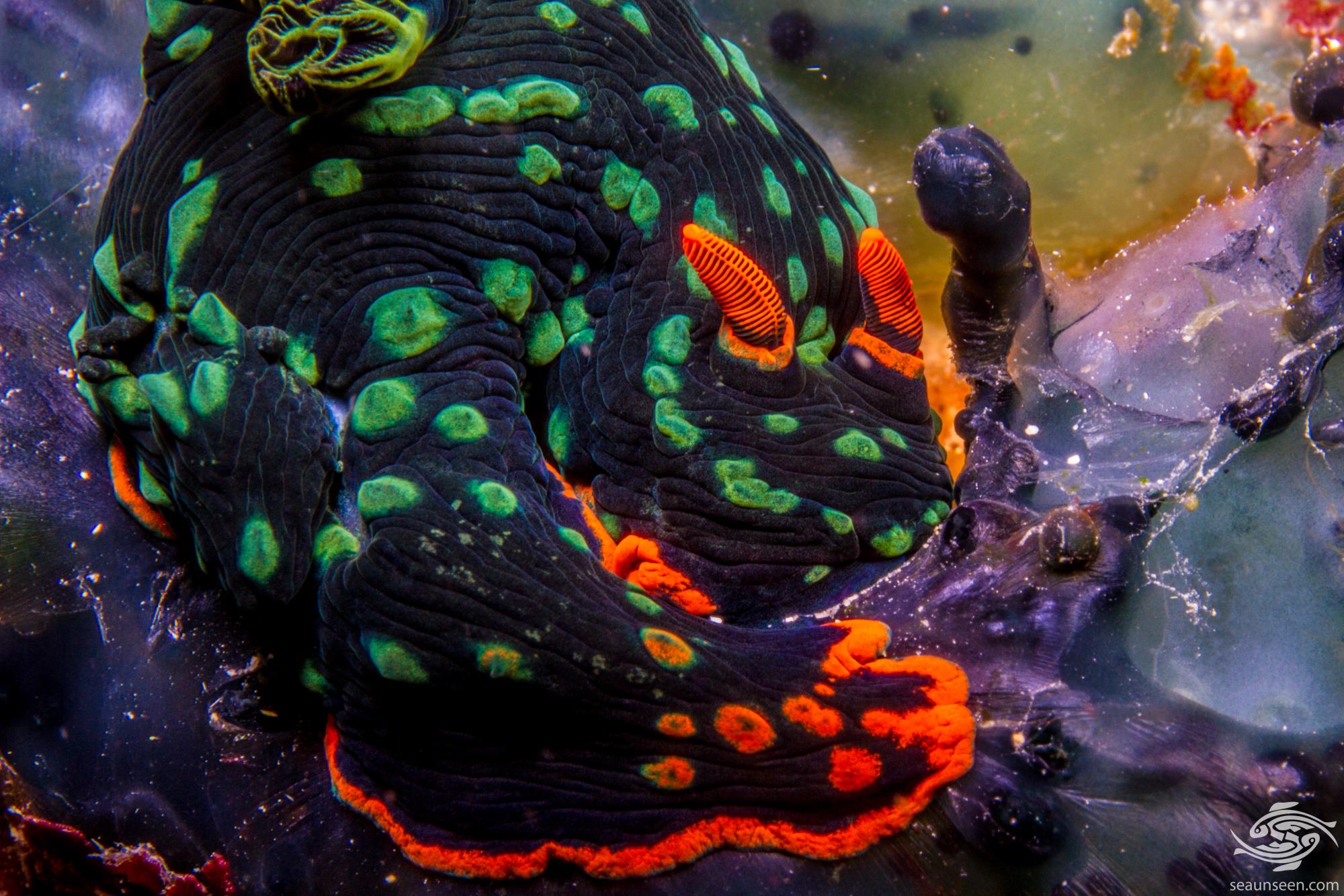 The Nembrotha kubaryana is found across the Indo West Pacific area . They are found on rocky and coral reefs to a depth of 30 meters. 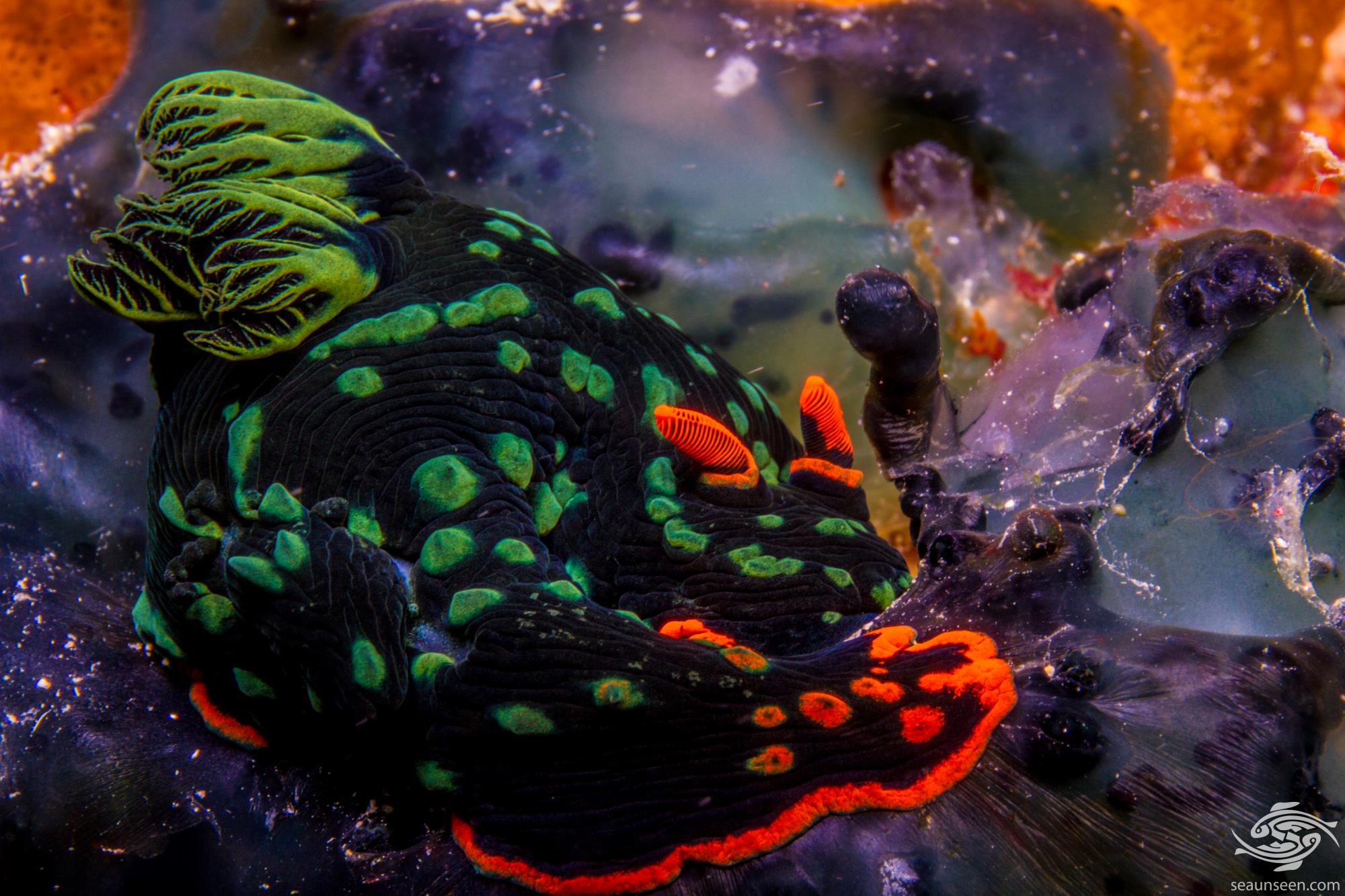 Nembrotha kubaryana feed on colonial sea squirts, also known as ascidians. In the images above and below a specimen can be seen feasting on an ascidian which may be Sigillina signifera.  Noxious antifeed chemicals are absorbed from these ascidians and are exuded as a mucus when they are threatened.

Nudibranchs have their teeth on their radula which is similar but not quite the same as a tongue. Food is grasped and processed by the radula and passed through the esophagus into the stomach. After digestion waste products pass through the intestine out the anus, which in dorid nudibranchs is in the middle of the gills.

They are simultaneous hermaphrodites and mating takes place by connecting the sexual organs which are on the right hand side of the body. Once the two organs hook up sperm is transferred across to each specimen. Eggs are laid on a solid substrate and when they hatch the larvae become planktonic before growing into adults. Research indicates that it is possible that Nembrotha kubaryana may be able to self fertilize but further studies are necessary. 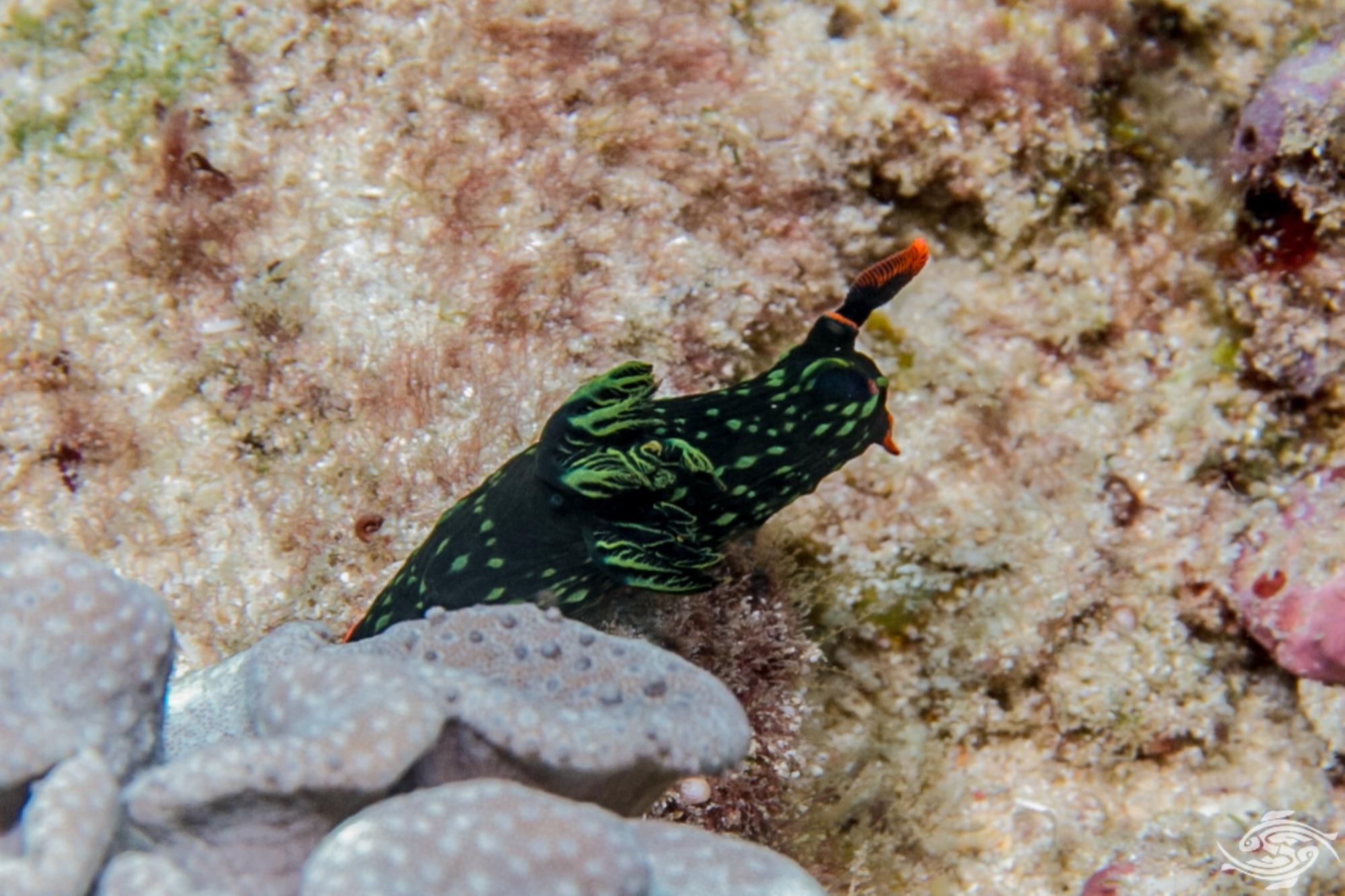 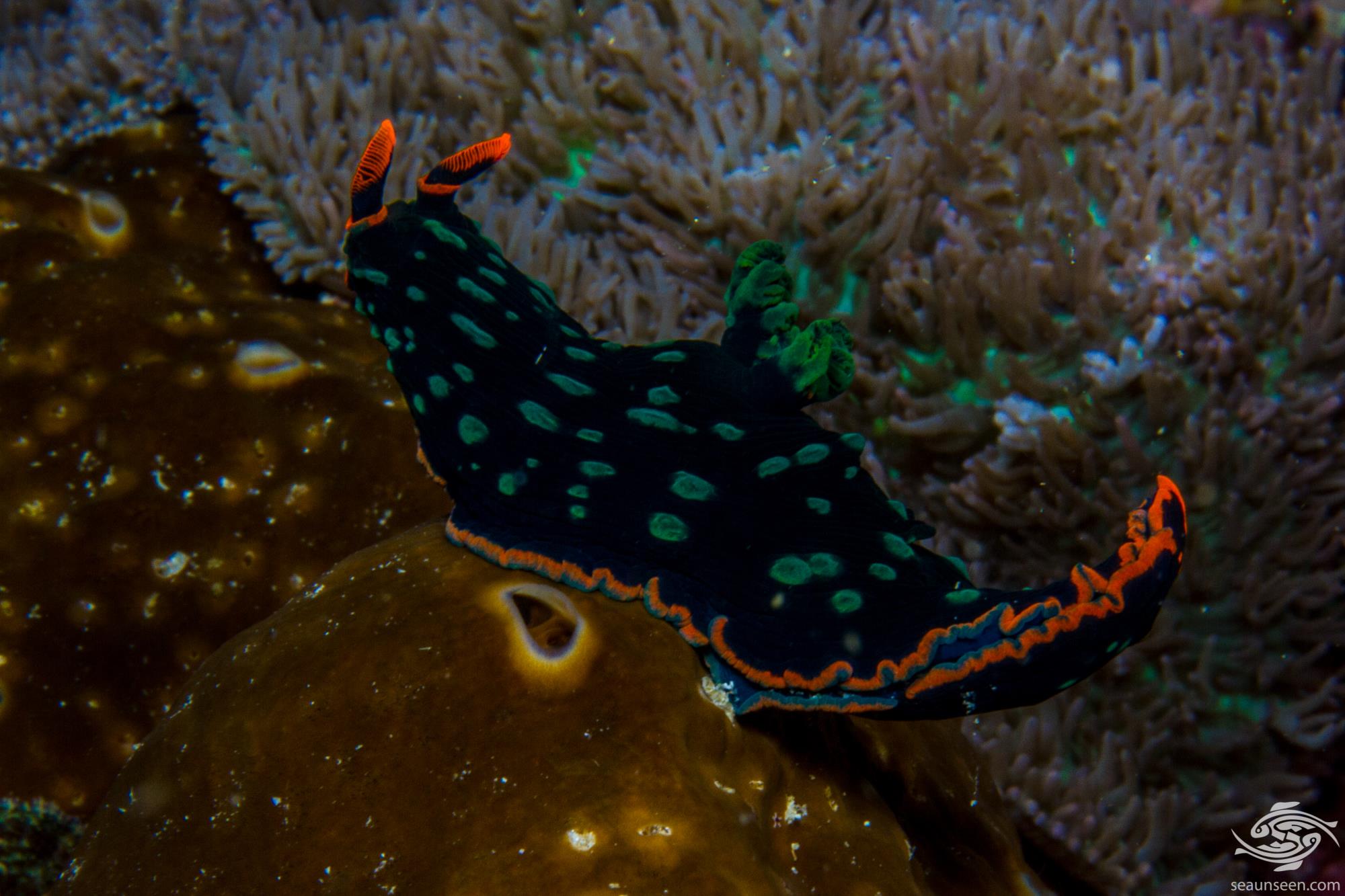