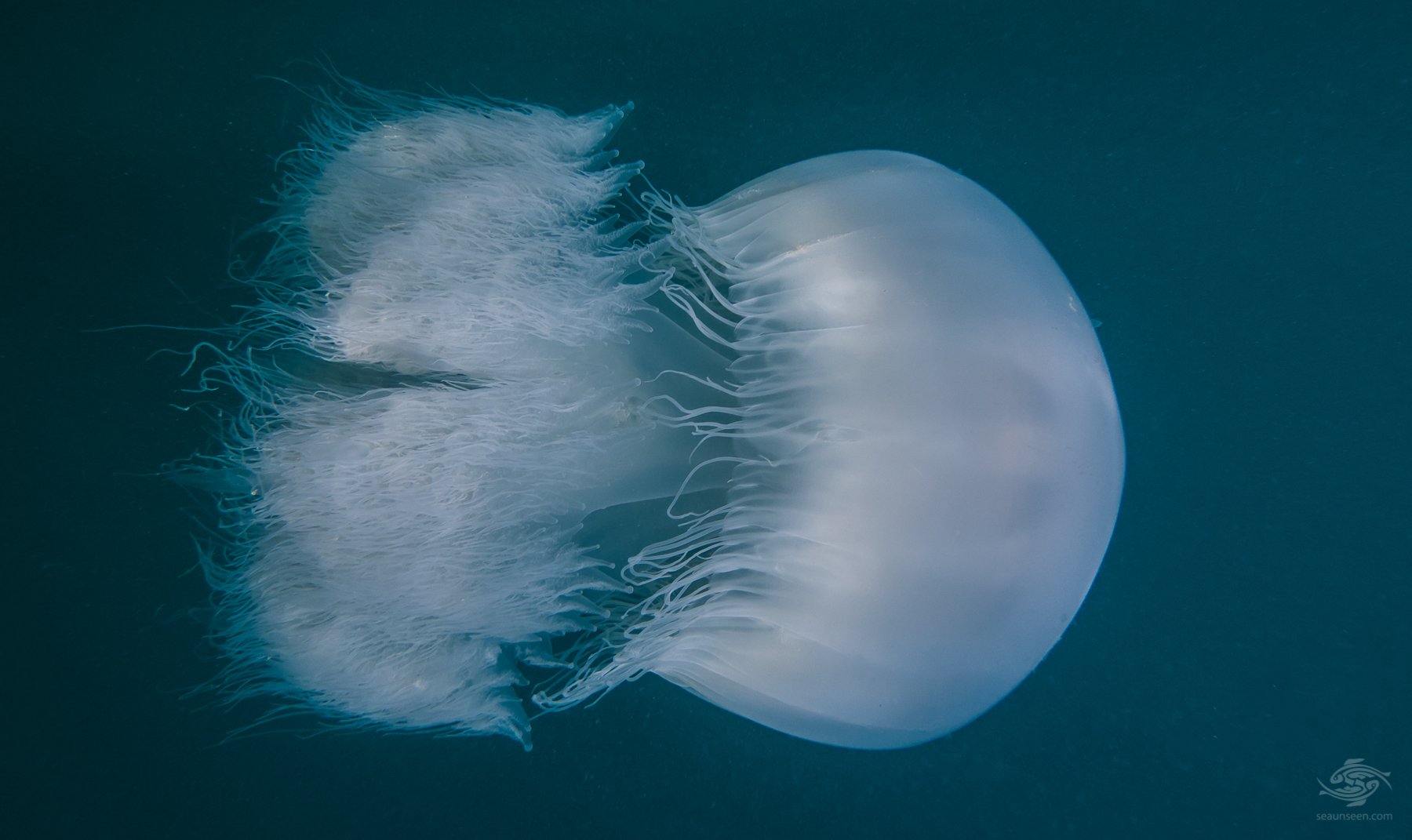 A giant nomad jellyfish (Rhopilema nomadica), photographed while snorkeling off the coast of Mafia Island. Although, quite captivating to see in the water, be sure to steer clear of these guys. They can cause very painful injuries to humans, since they have vermicular filaments which are covered in venomous stinging cells in the mouth arms.

These jellies can grow up to 10 kg (22 lbs) of weight, and its bell is commonly 40-60 cm (16″-24″) in diameter, but can be up to 90 cm (35.4″). The European Union lists them as one of the worst invasive marine species as they have moved up the Suez Canal into the Mediterranean and are now causing problems as far west as Malta. Make sure to steer clear as they can cause very painful injuries to humans.

Usually Nomad jellyfish or jellies as they are more correctly called come inshore in large numbers on the Tanzanian coast every November and December. In October 2016 large numbers moved into the coastal waters. They were seen in heavy densities as far out as Latham Island which is 34 nautical miles from the mainland.

The image below was taken from around 500 feet in height and gives one an idea of the numbers that arrived. Each white dot is a Nomad jellyfish. Coupling was observed between some of the jellyfish and this can be seen in the image below.  You can learn more about Jellyfish here. 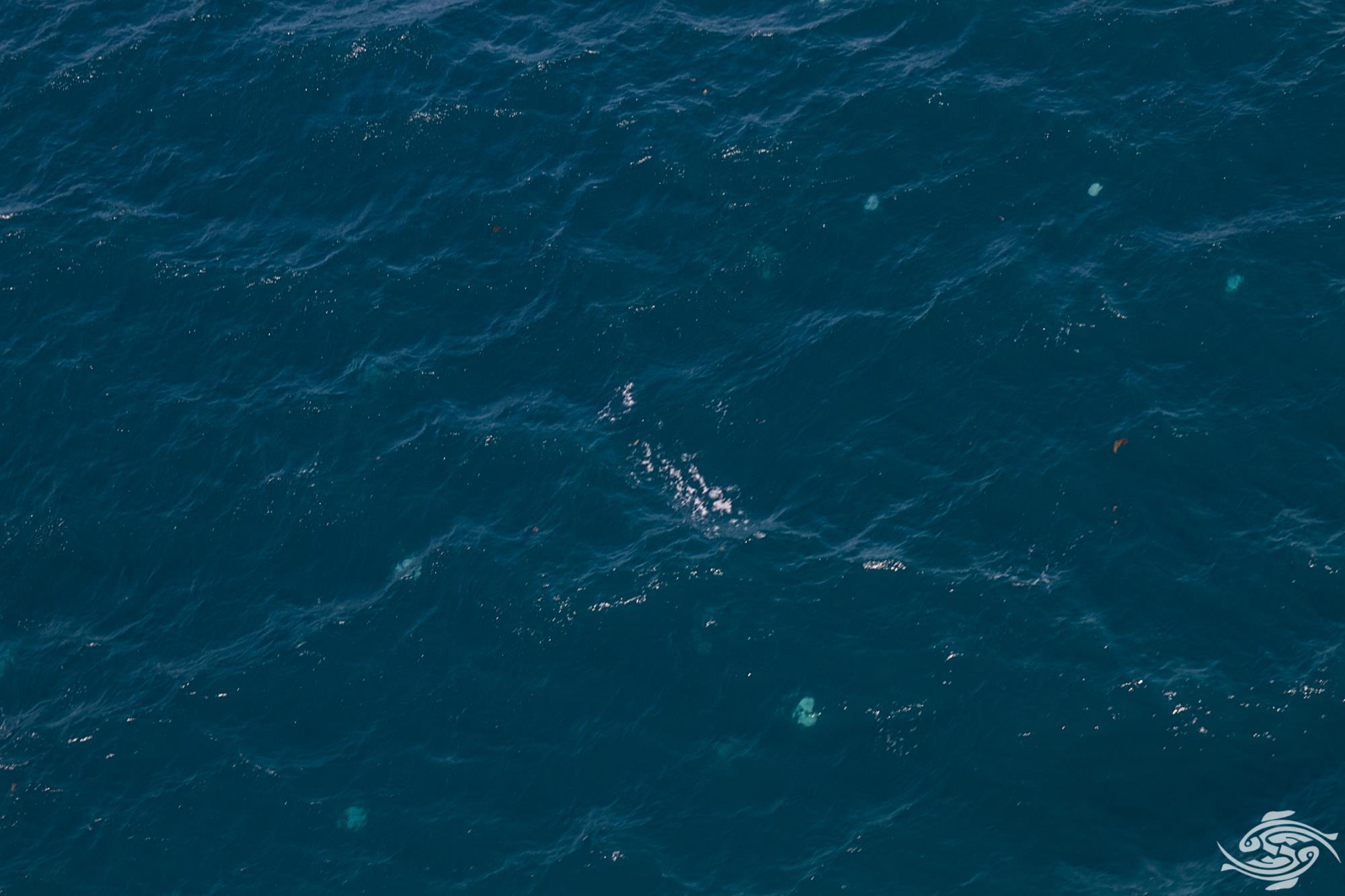 Below is some footage taken of the Nomad Jellyfish

Nomad Jellyfish are able to give powerful stings which linger for about three weeks. The authors arm seen below after touching one tentacle gives testimony to this. The pain is burning and fairly extreme for about ten or fifteen minutes and it took three weeks for the rash and blisters that developed to go away. Essentially the toxins in the nematocysts provoke an acute inflammatory response with swelling and sometimes blisters. You can also develop a rash in the area that has been stung. 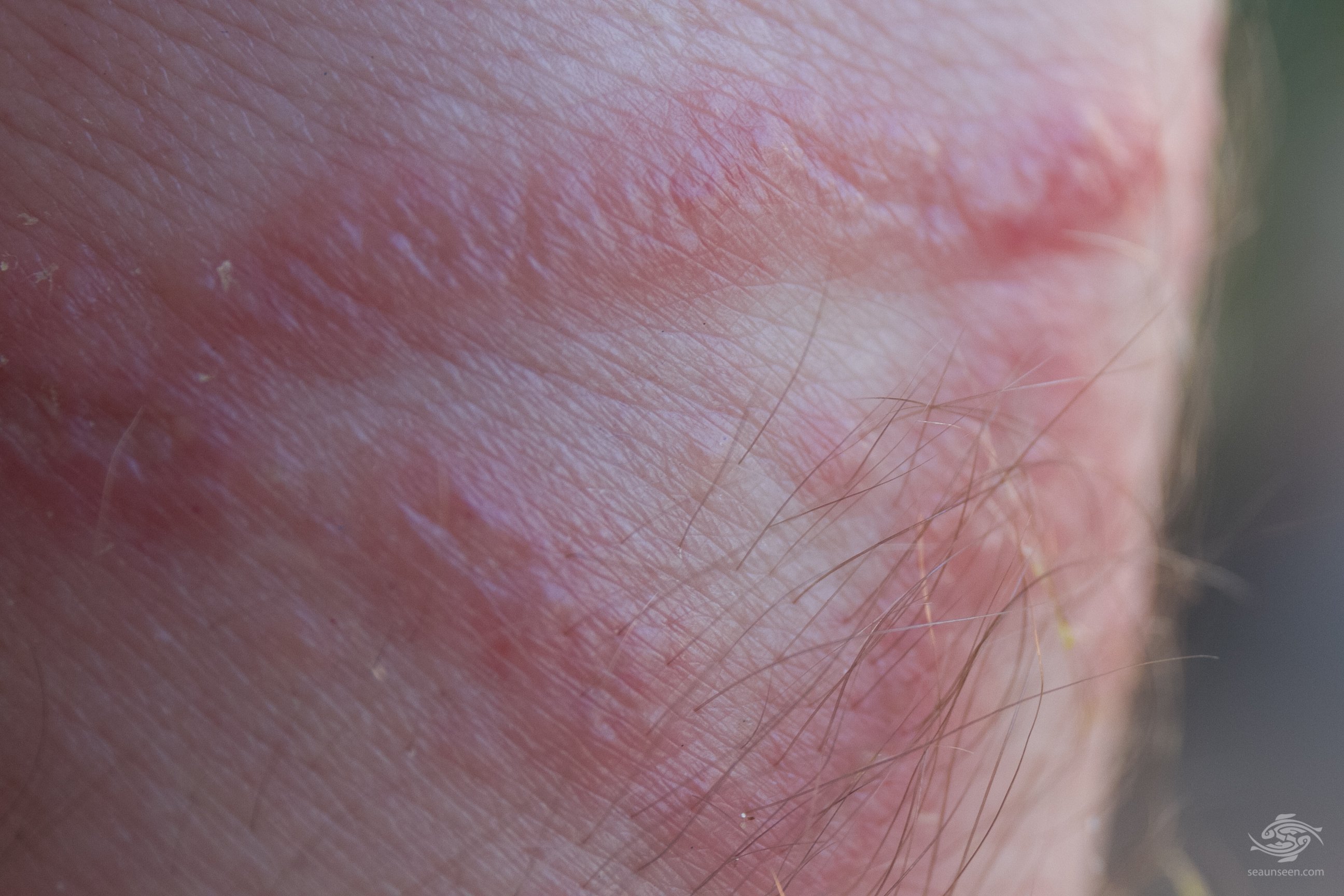 WHAT TO DO WHEN STUNG BY A NOMAD JELLYFISH

GET OUT THE WATER

The first thing to do is head for the shore because you do not want to be stung again and there may be a  possibility you will have an allergic reaction to the venom.

GET THE TENTACLES OFF YOU PREFERABLY WITH SEAWATER WITHOUT TOUCHING IT

The second thing that you need to ideally do simultaneously while heading out the water is to get the tentacles off of you. They carry on stinging you and pumping poison into you. Having been stung so many times the minute I feel the sting, I immediately start getting it off me. If I am in deep water I will use my hand as a paddle to push water at the area that has been stung and float the tentacles and any mucus off of me. If I am in shallower water  I will aggressively splash the area with seawater.

The quicker you get all of it off you the better and it makes a massive difference in terms of the pain. Its best not to touch it with your hands and rather than running around looking for tweezers and sticks I splash or wash it off  through fast movements in the water. If there is a handy rock pool nearby so much the better to get it all off by rinsing it and splashing seawater onto the sting site to get the smaller tubules you cannot see off. Getting it off very fast is highly recommended.

Once you have the main part of the tentacles off you it is important to understand that you still have large quantities of the minute stinging cells tubules (0.001 mm in diameter)  attached to you. You cannot see them as they are so small and there is still poison in the tubules. After thoroughly splashing the site, if you can find something suitable with a sharp edge such as a shell, knife edge or a credit card, lightly scraping this across the area will remove more of the tubules. There will be a lot less poison that could go into you. These early steps can save you a lot of pain.

You can run for the nearest shower on the beach and wash it off, which is what most people do but be warned that fresh water causes the stinging cells to release more venom. As the tentacle goes down you it will continue stinging you. It is highly recommended to wash the tentacle off with salt water for this reason.

Some people recommend using a handful of sand to rub the tentacle off. Quite why you would want to sand paper the sting into your skin is beyond me. This sounds like a silly idea and it is. If necessary use a shell or stick or anything sharpish that is handy to scrape it off.

If you have allergies or have been stung around the neck and there is any swelling then get to the nearest Lifeguards hut or Doctor very quickly. If you have quite a few stings then it is also a good idea to get to a Doctor.

Just in case its best to be safe and get yourself to a doctor if there is swelling around the lips and eyes, rapid development of a rash, chest tightness, shortness of breath or wheezing, severe dizziness or faints, persistent sneezing or coughing, hoarse voice, difficulty swallowing or throat tightness or any signs of shock (pale skin, rapid pulse or fainting). Fatalities have occurred but only very very rarely and you would have to be extremely unlucky for it to get that bad.

CHILDREN ARE LIKELY TO BE MORE AFFECTED

Poisons work on body mass, so the smaller you are the greater the effect of a given amount of poison. Children, asthmatics and those with allergies are most at risk and need to be watched carefully if stung

It is important to stay calm and there are quite a few options to relieve the pain. It seldom hurts much for more than twenty minutes before it starts itching. You can take a paracetemol tablet to help with the pain.

THE RECOMMENDED BY SCIENCE CURE

All the research done in Australia where people get stung a lot by jellyfish or sea jellies seems to indicate that soaking in hot water  is the best cure, as it breaks the poisons protein chains up. They recommend soaking between 42 C and 45 C or in other words just about as hot as you can take it for 20 minutes. Most geysers are set between 55 C and 65 C to give you an idea of what really hot is. Be careful not to burn yourself and a hot shower should help if there is nothing else.

Anything a bit above body temperature is likely to give you some pain relief according to the research. Of course there isn’t much hot water on normal beaches and what you can do as a precaution especially if you have kids is take a thermos flask of hot water to the beach with you.

If there is no hot water nearby then it is recommended that you use ice or something cold, on most beaches  you can find a cold cool drink somewhere to push on the sting on route to finding some hot water. A standard antihistamine antiseptic cream can be used on the sting site to reduce itching and prevent any infection.