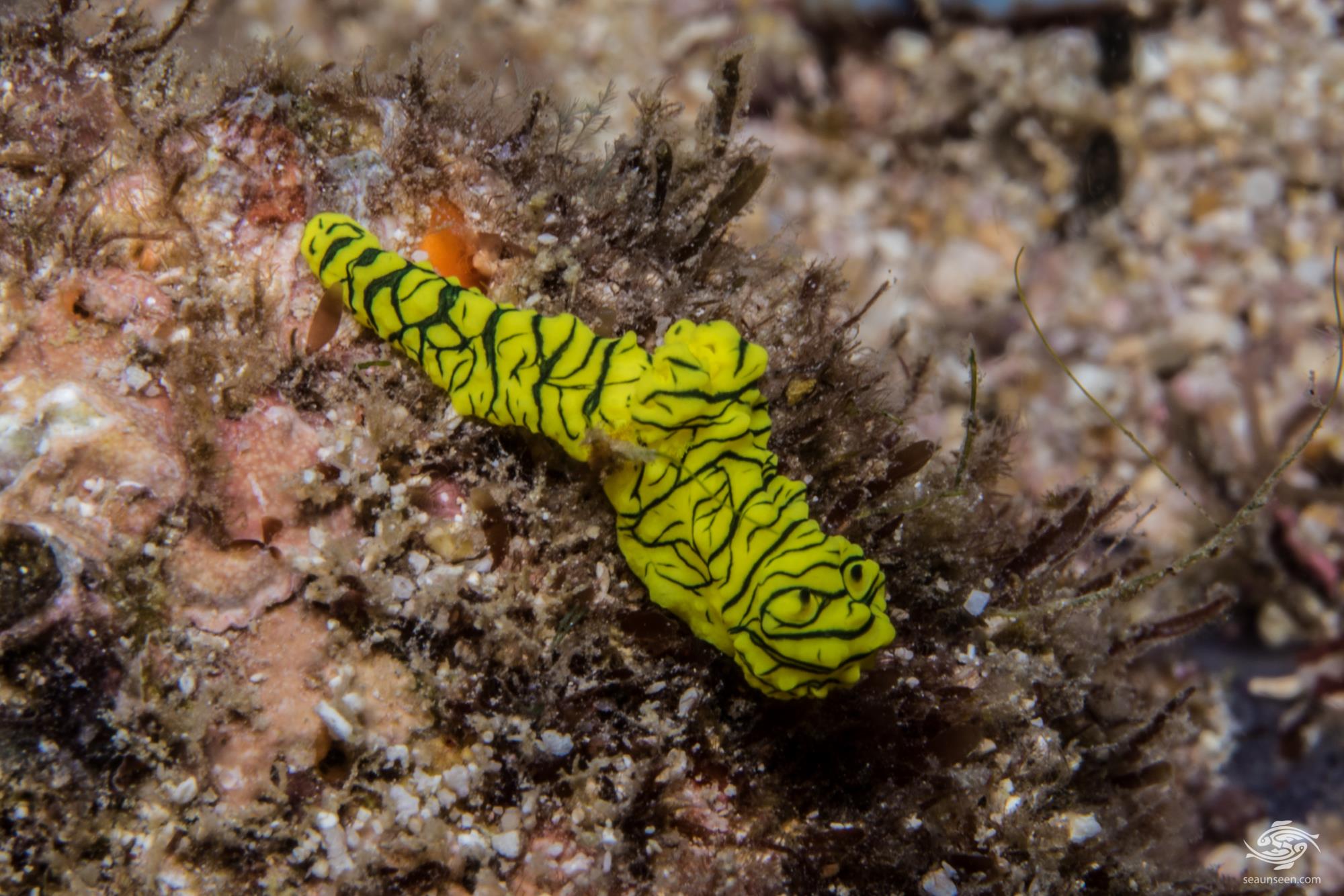 Notodoris minor is a brightly colored dorid nudibranch, a marine gastropod mollusk that is also known by its common name of the Bannana Nudibranch. They were first described by Elliot in Zanzibar in 1904.

The specimen in this image was photographed on Mafia Island in the Marine Park where they are often seen. We have never to date seen them on the Tanzanian mainland coast. Their bright coloration signals the fact they are poisonous to predators and this is known as aposmatism.

Notodoris minor have an elongated round shape with a tough hard skin with some pustules irregularly spread across the body.  The gills are located mid body and are hidden by three large protuberances from within which they occasionally become visible. The body is bright yellow and has a pattern of black lines running mainly transversally across the body but with an element of randomness.

The rhinophores are small and yellow and are normally black tipped in juveniles and yellow in adults. This specimen seems to be an exception because at 8cm it would normally be considered an adult. Similar looking specimens have been reported in the Mascarenes  They grow up to 14 centimeters in length. 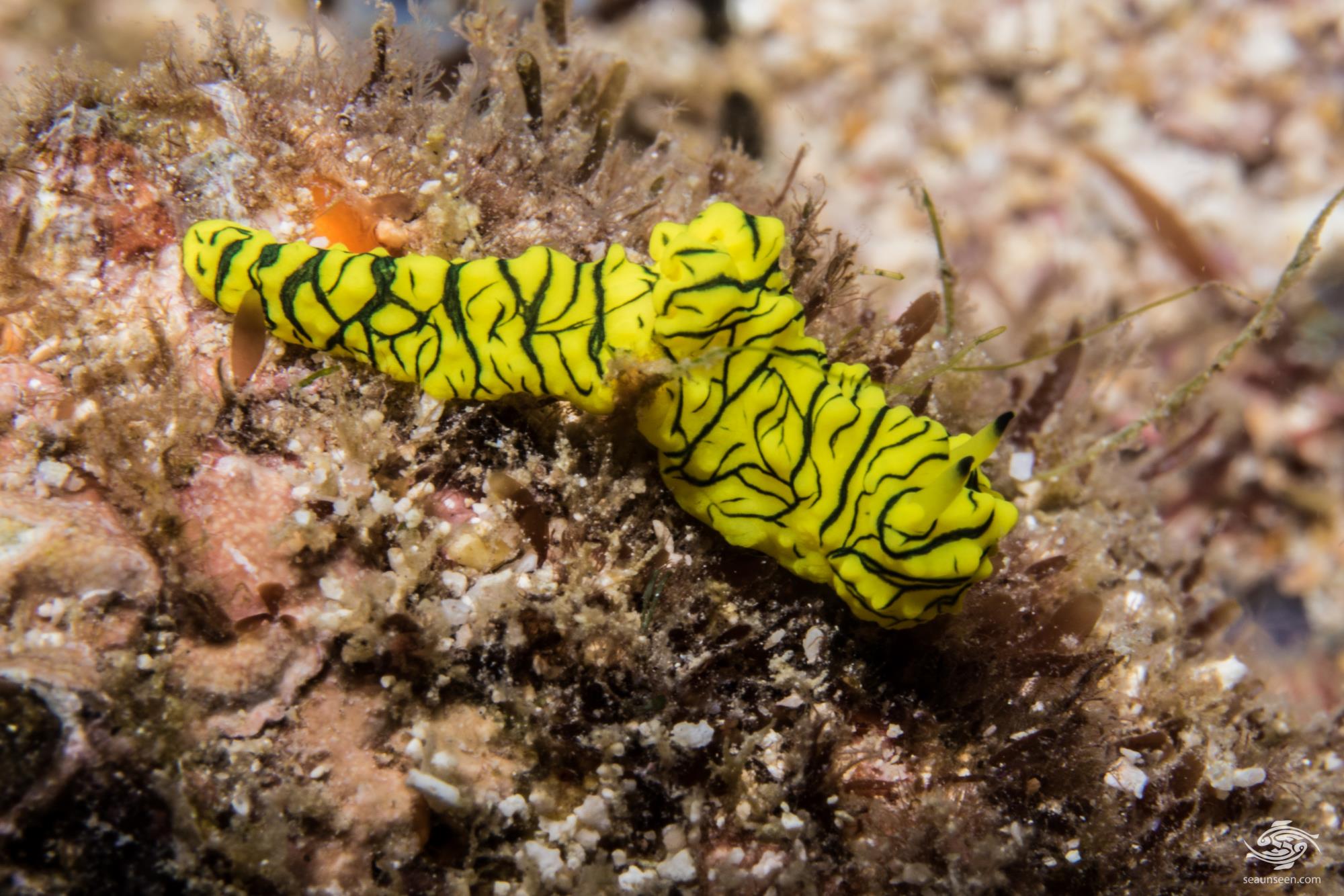 NOTODORIS MINOR IN THE WILD

Notodoris minor are reportedly fairly common on Mafia island on the seaward reefs and were initially described on Zanzibar and have been recorded on Pemba island, but have not to our knowledge been seen on the mainland. They are very slow moving compared to other nudibranchs. 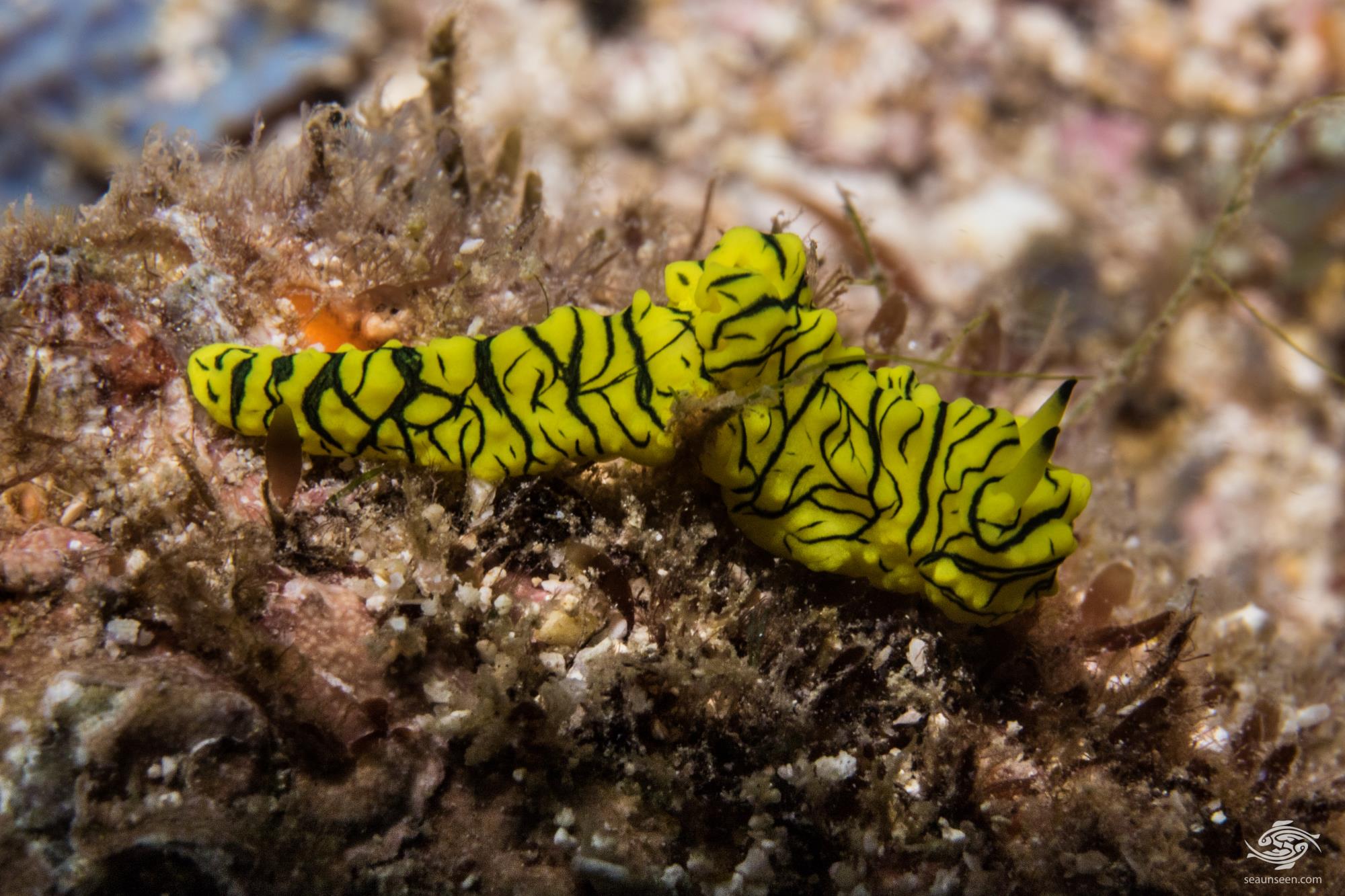 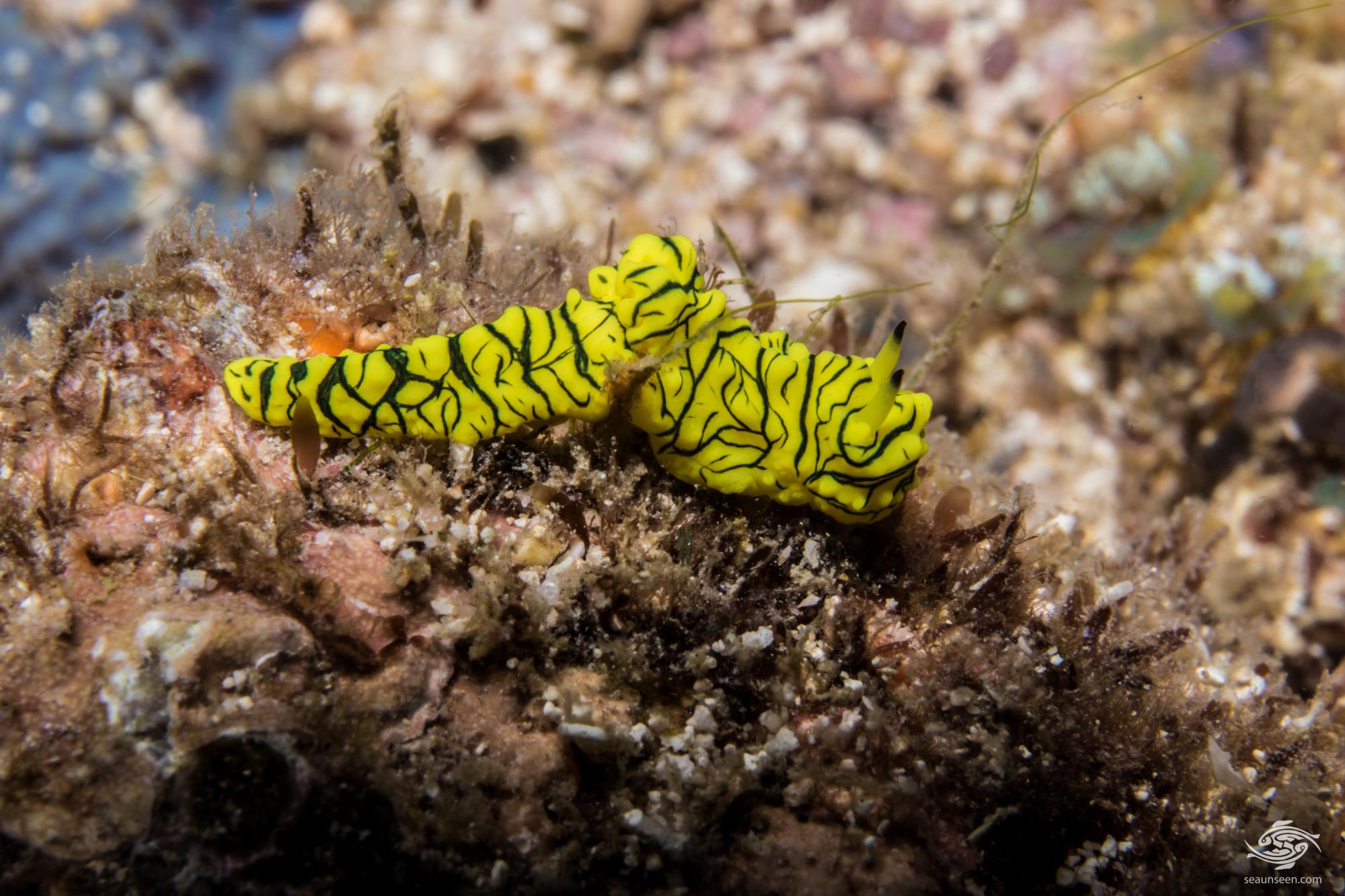 Notodoris minor feed mainly on certain species of calcareous sponges belonging to the family Leucettidae. The chemicals synthesized by bacteria in the nudibranch from these sponges provide them with chemical protection against predators. 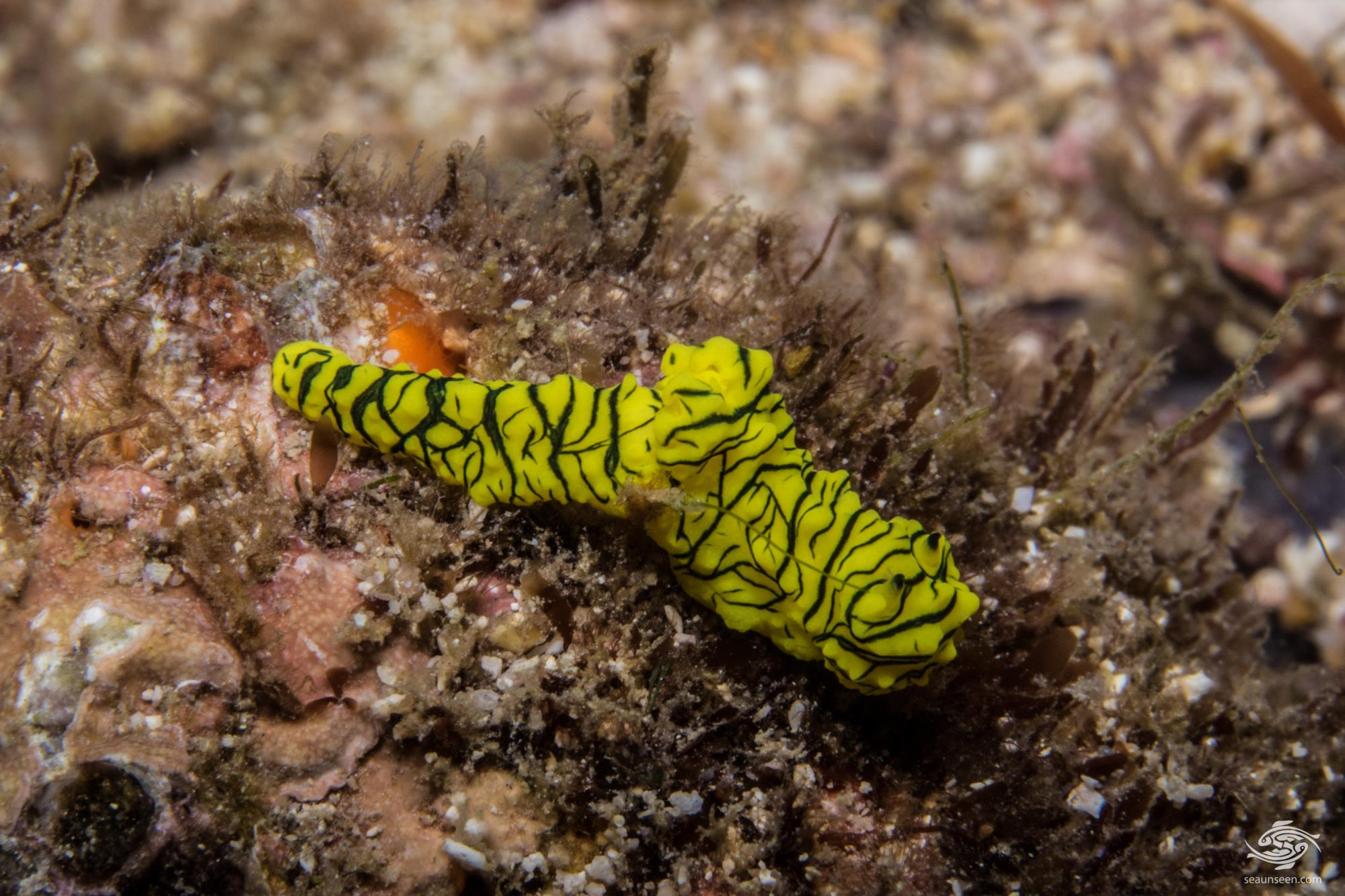 Notodoris minor are simultaneous hermaphrodites and mating takes place by connecting the sexual organs which are on the right hand side of the body. Two specimens manouvre right side on and extend their organs towards each other. Once the two organs hook up sperm is transferred across to each specimen. Eggs are laid on a solid substrate in a bright yellow gelatinous egg ribbon and when they hatch the larvae or  veligers as they are known become planktonic before growing into adults.