One Spot Snapper- Facts and Photographs 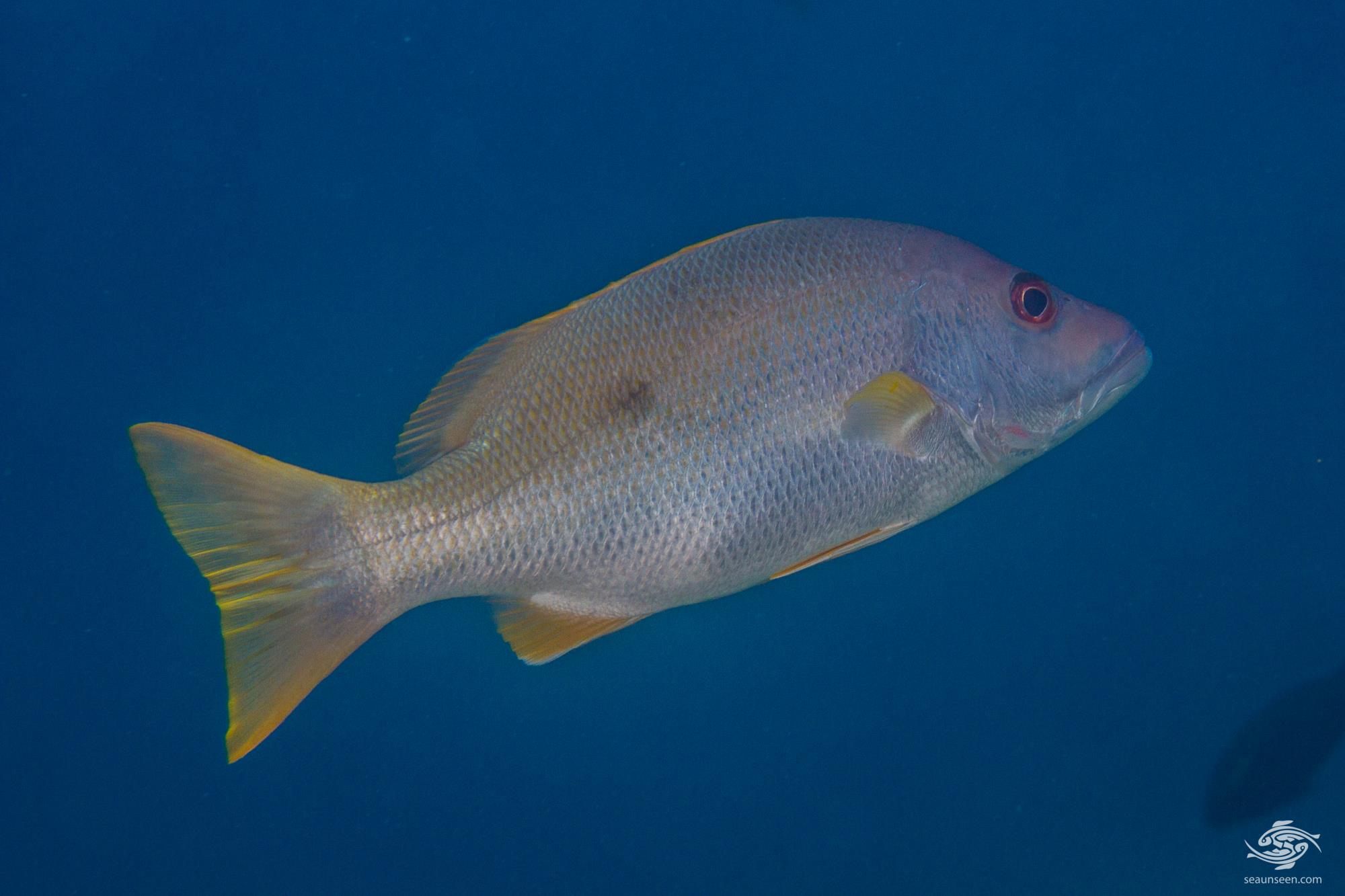 The One spot Snapper (Lutjanus monostigma) is also known as the Black Spot Snapper, One-spot Seaperch and Onespot Perch. They are not that common on the Tanzanian coast but in the protected Marine Parks they are common.

One spot Snapper have a typical snapper shape and the body is a silver color with a tint of pink on the facial area. The fins are yellow and they sometimes have a black spot slightly above mid body in the rear  third of the body.  They seem to have the ability to turn this spot off or make it fairly indistinct as can be seen in the image above whereas the specimen in the image below has darkened the spot. Certainly however the spot is more prominent on the juvenile fish.

This black spot makes them easy to confuse from a distance with the Ehrenberg’s Snapper and the Dory Snapper. The easy way to distinguish them against the other two species is the fact that the body is silver with no lines and the fins are yellow. The largest specimens we have seen have been around 50 cm but they grow up to 60 cm. 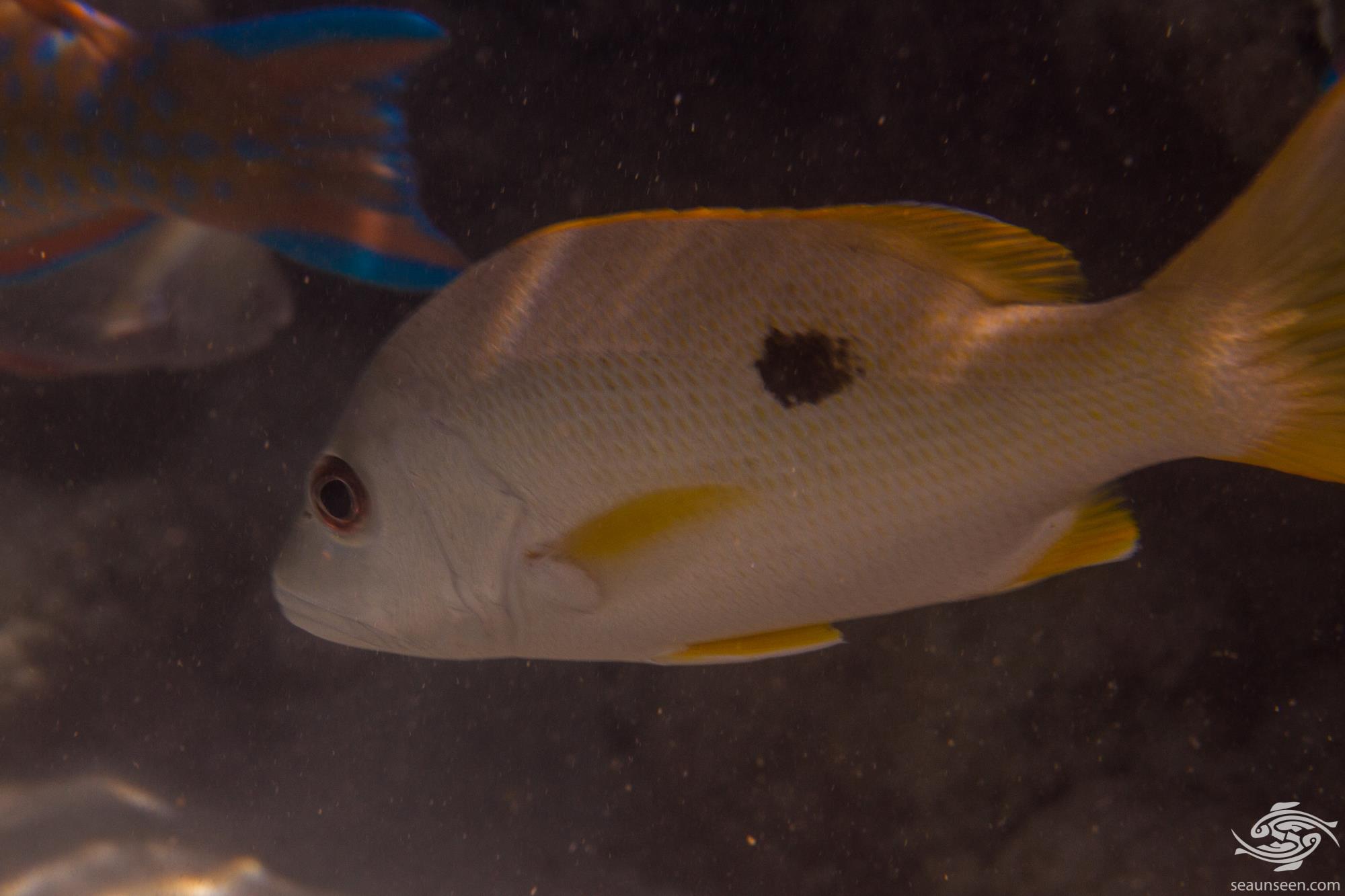 ONE-SPOT SNAPPER IN THE WILD

The One spot Snapper is generally seen solitary as a juvenile but the adults are sometimes seen in small shoals swimming above the reef during the day, particularly on reef slopes as can be seen in the image two down. Theses shoals comprise of fifteen to twenty fish. The juveniles seem more common in turbid shallows than on the reef its self.  In these areas they feed with Parrotfish and other species of bream. 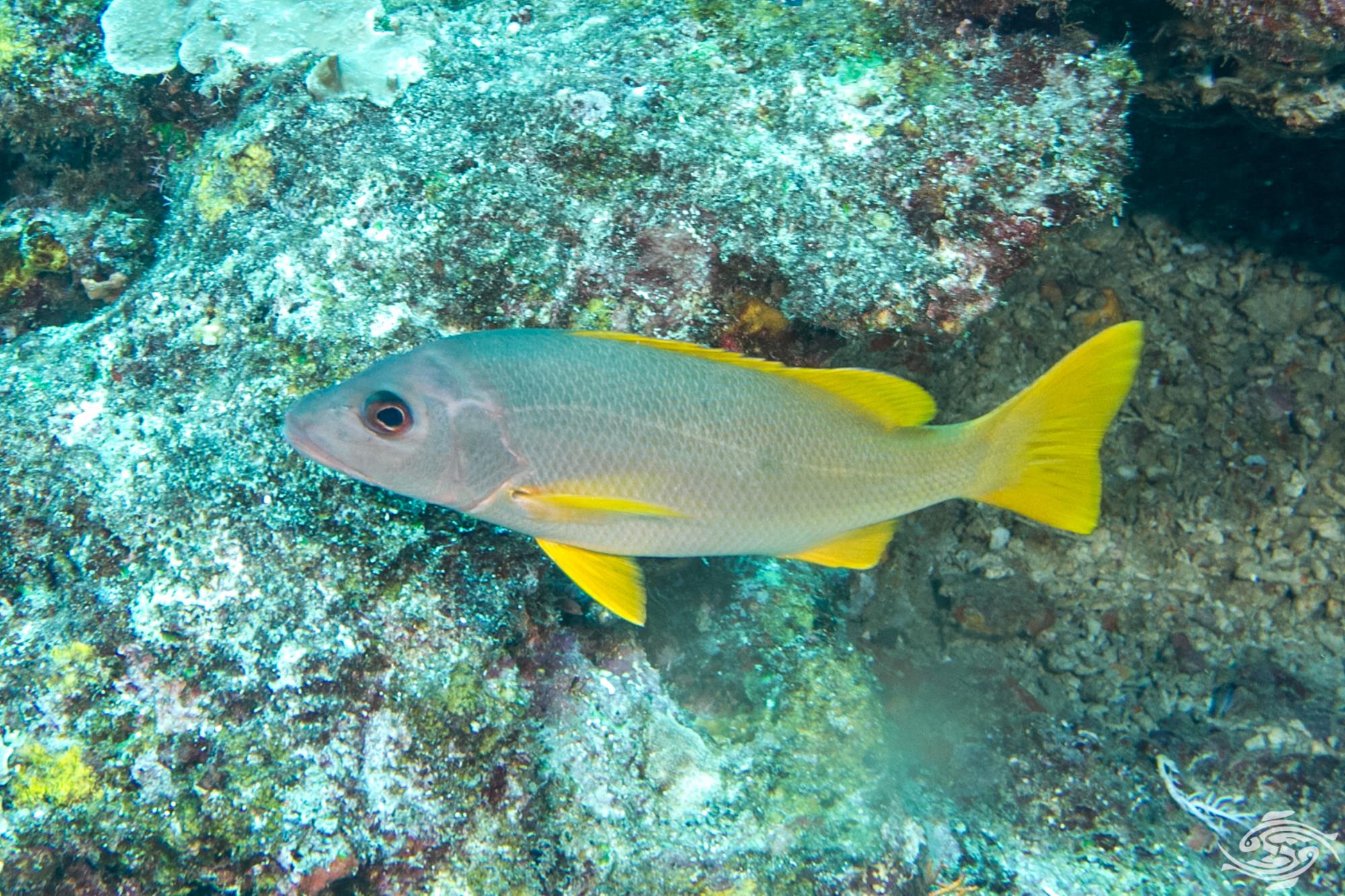 One spot Snapper are widely distributed across the tropical Indo-Pacific, from East Africa up to the Red Sea and across to the Ryukyu Islands in southern Japan and down to North Eastern Australia and Samoa.  We have seen them on reef slopes down to depths of approximately 20 meters. 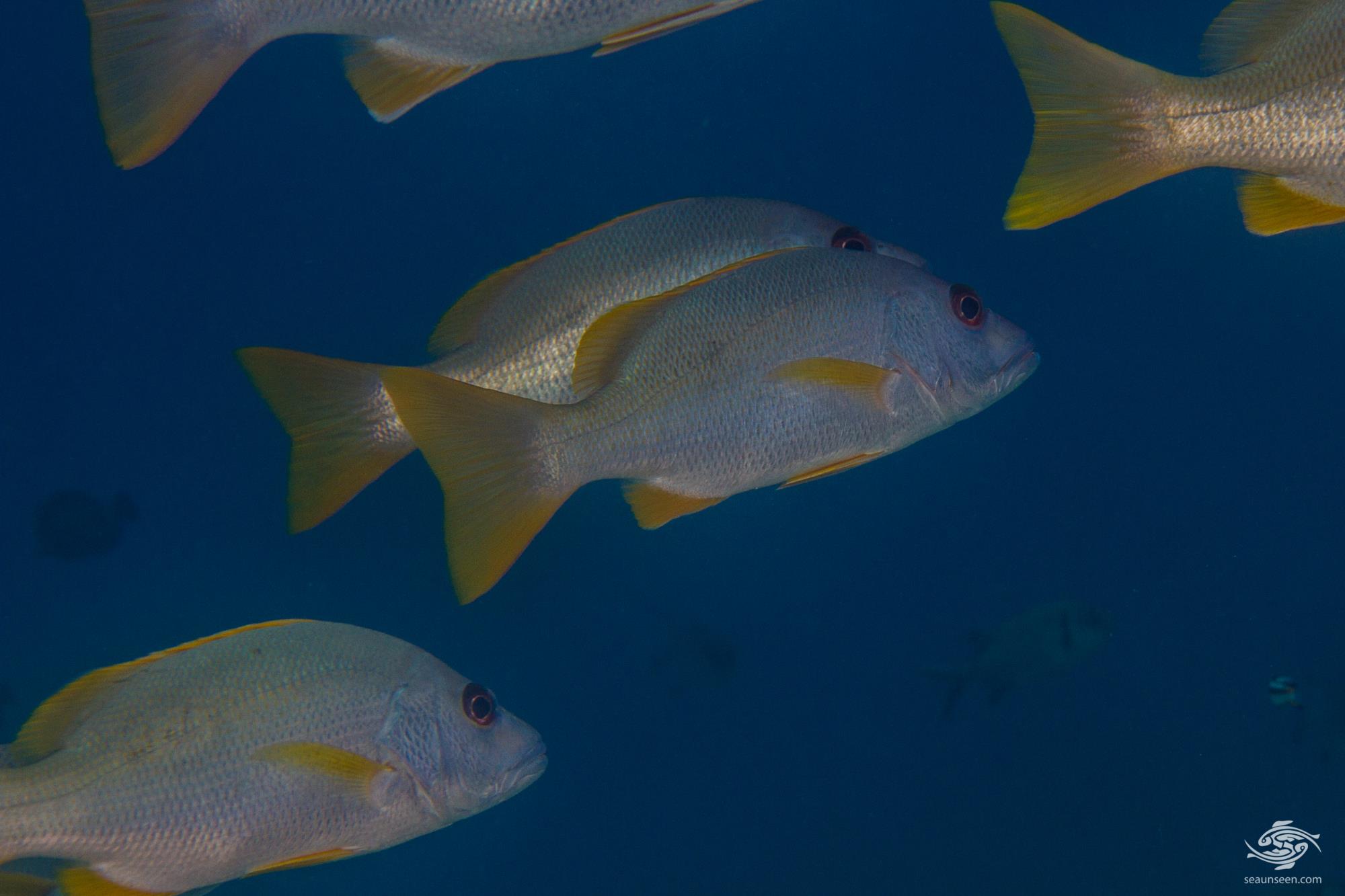 One spot Snapper have a varied diet, feeding on fishes and crustaceans. Their diets vary with  locally available prey items. 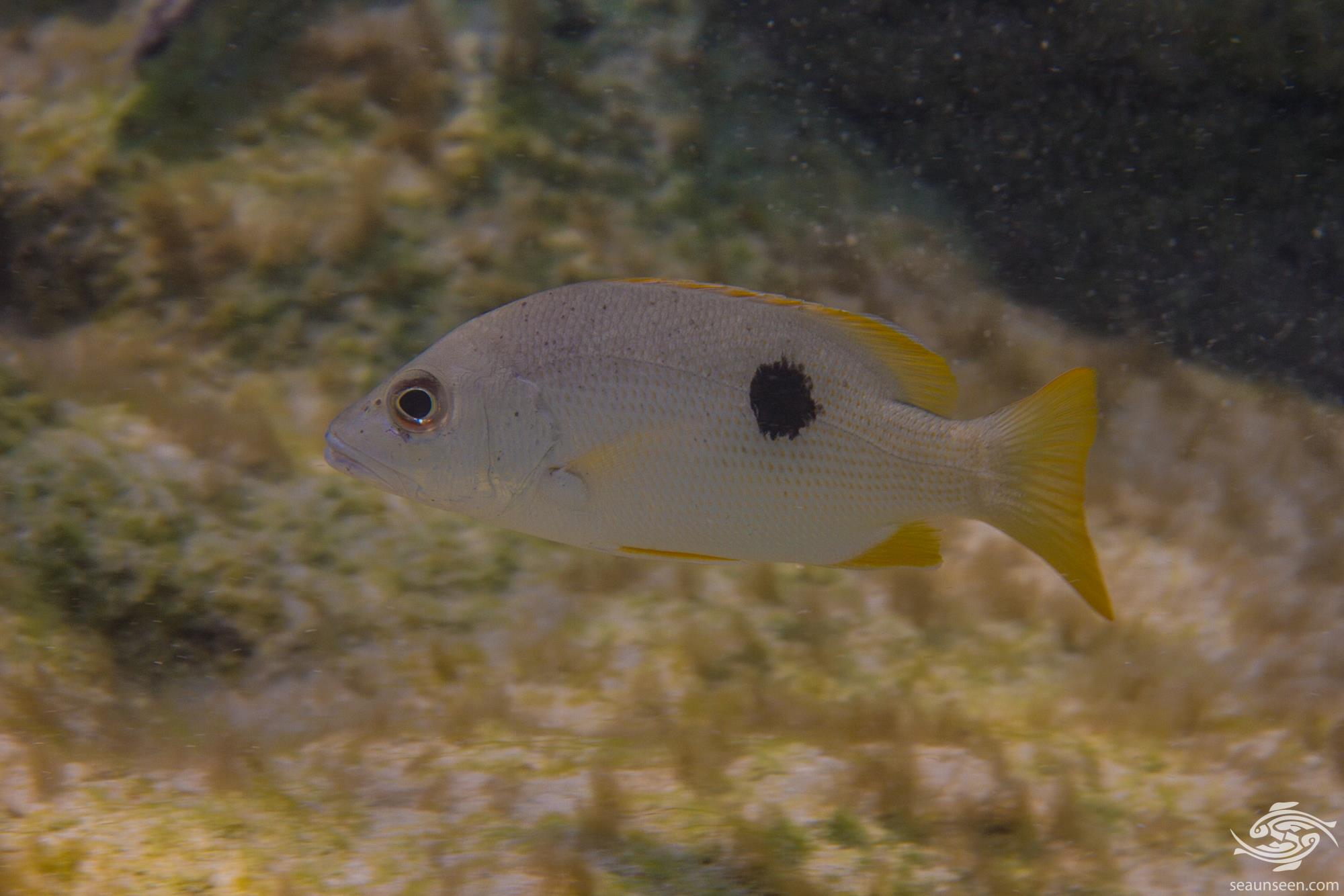 One spot Snapper reach maturity at approximately 2 year at a size of 32 cm for the females. They have been known to live for up to 13 years. The adults group spawn in large numbers and the eggs which are round and transparent float off in the current. Spawning in East Africa lasts from November to May. After undergoing a pelagic stage the juveniles make their way back to the reefs. Group spawning usually takes place in areas of strong current. 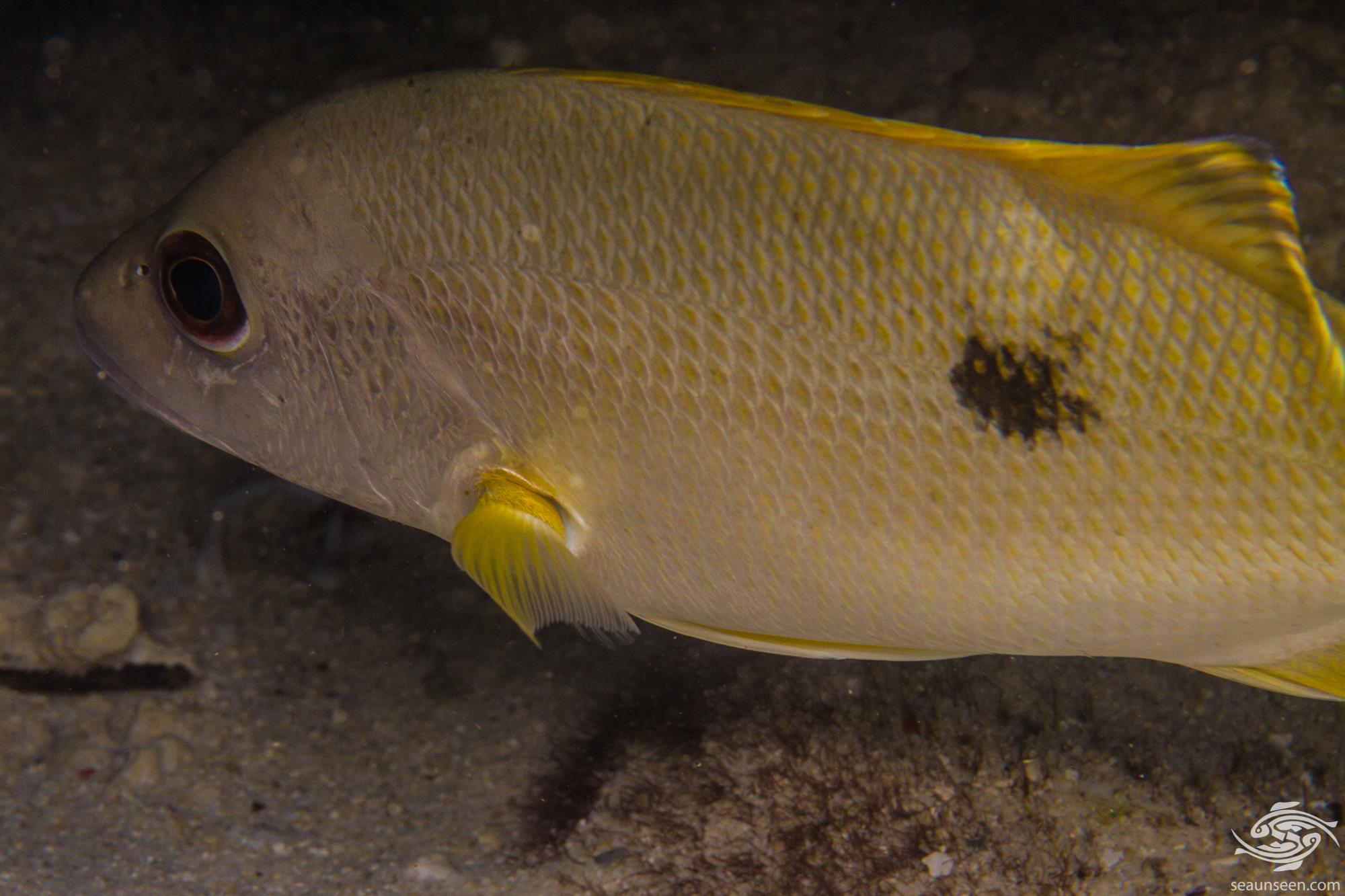 One spot Snapper are exploited commercially.  In Tanzania they are caught by fishermen in traps and on lines and are occasionally netted in the shallows. They are usually sold fresh and are a highly sought after fish in restaurants. They are tasty to eat.