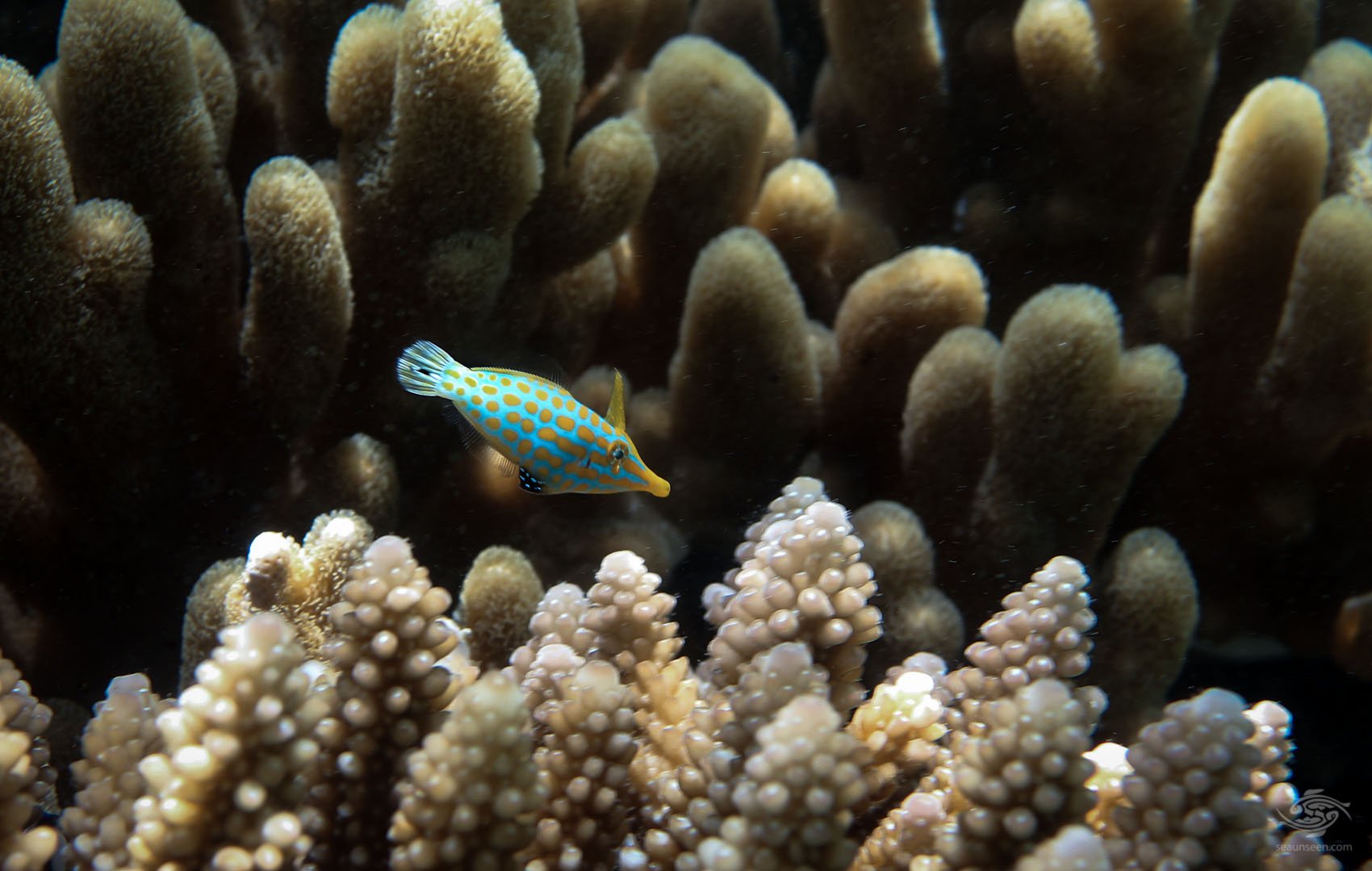 The Orange Spotted Filefish or Longnose Filefish (Oxymonacanthus longirostris) can be usually found near its food source, acropora coral. More often than not they are in pairs. They are not common fish on the Tanzanian coast and it is relatively rare to sight them.

Filefish, also known as leatherjackets in Australia are closely related to Triggerfish and Pufferfish. Filefish are in the family Monacanthidae meaning one spine. Similar to Triggerfish, they have a prominent first dorsal spine which can be raised for defense or wedging themselves into a hole. Filefish obtain their name from their rough non overlapping scales which have small spikes on them which gives their skin a very rough texture. 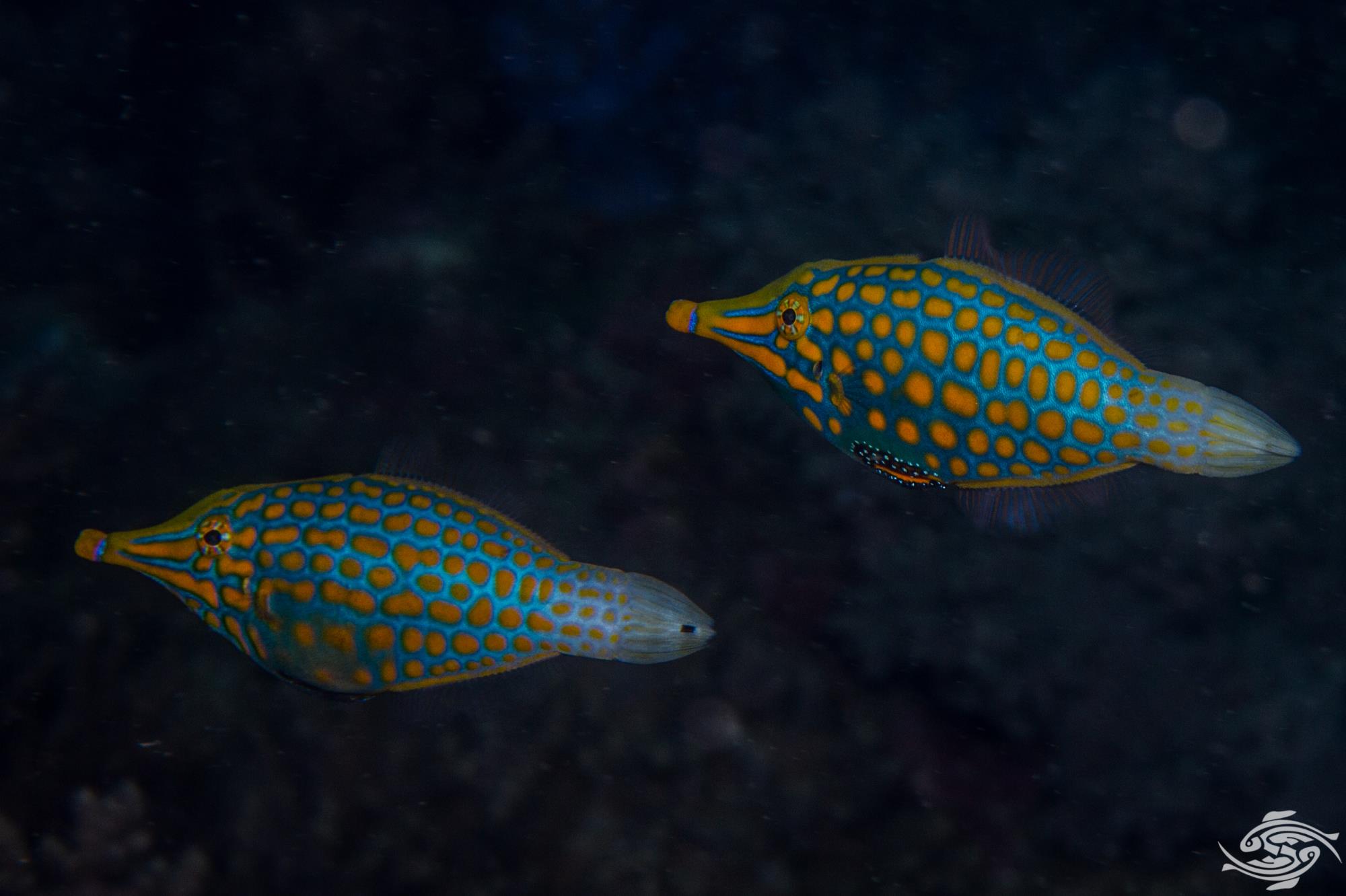 Growing to a maximum of 10 cm, the orange spotted filefish has an elongate body with a pointed nose. The body is laterally compressed. The tail is broad and is usually held  in a bunched up position.  The background color is a blue green color with orange/yellow horizontal lines coming back from the nose. As the lines progress further back from the nose so they turn into dots.

As can be seen in the image above the first dorsal fin is yellow/orange and the rear section is transparent. There are two dorsal spines but the second is small and is used to lock the larger first spine in an upright position. There is a black blotch on the tail and a black blotch with white dots on the lower abdomen.  The eye is surrounded by a yellow circle with evenly spaced blue marks around the circle. 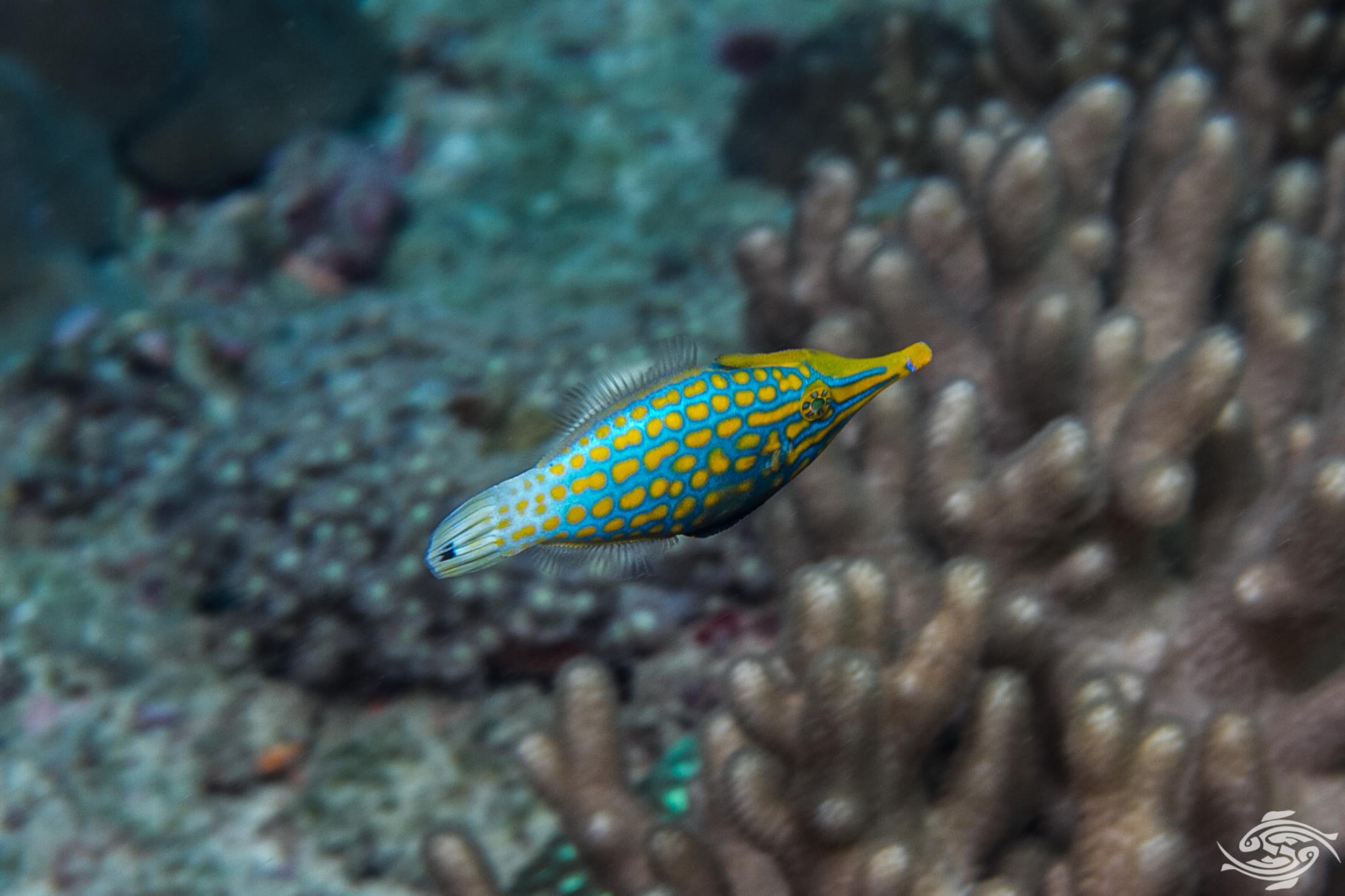 The orange spotted filefish is usually always found around its food source, acropora coral. Adults are mainly seen in pairs and the pair will often swim together in synchronized motion. They are fairly shy and unless they are hiding in the branches of acropora coral are difficult to approach. They are very quick to hide in the branches of the acropora corals. In Tanzania in summer they are sometimes seen in groups of up to eight fish swimming together. This may be mating related. 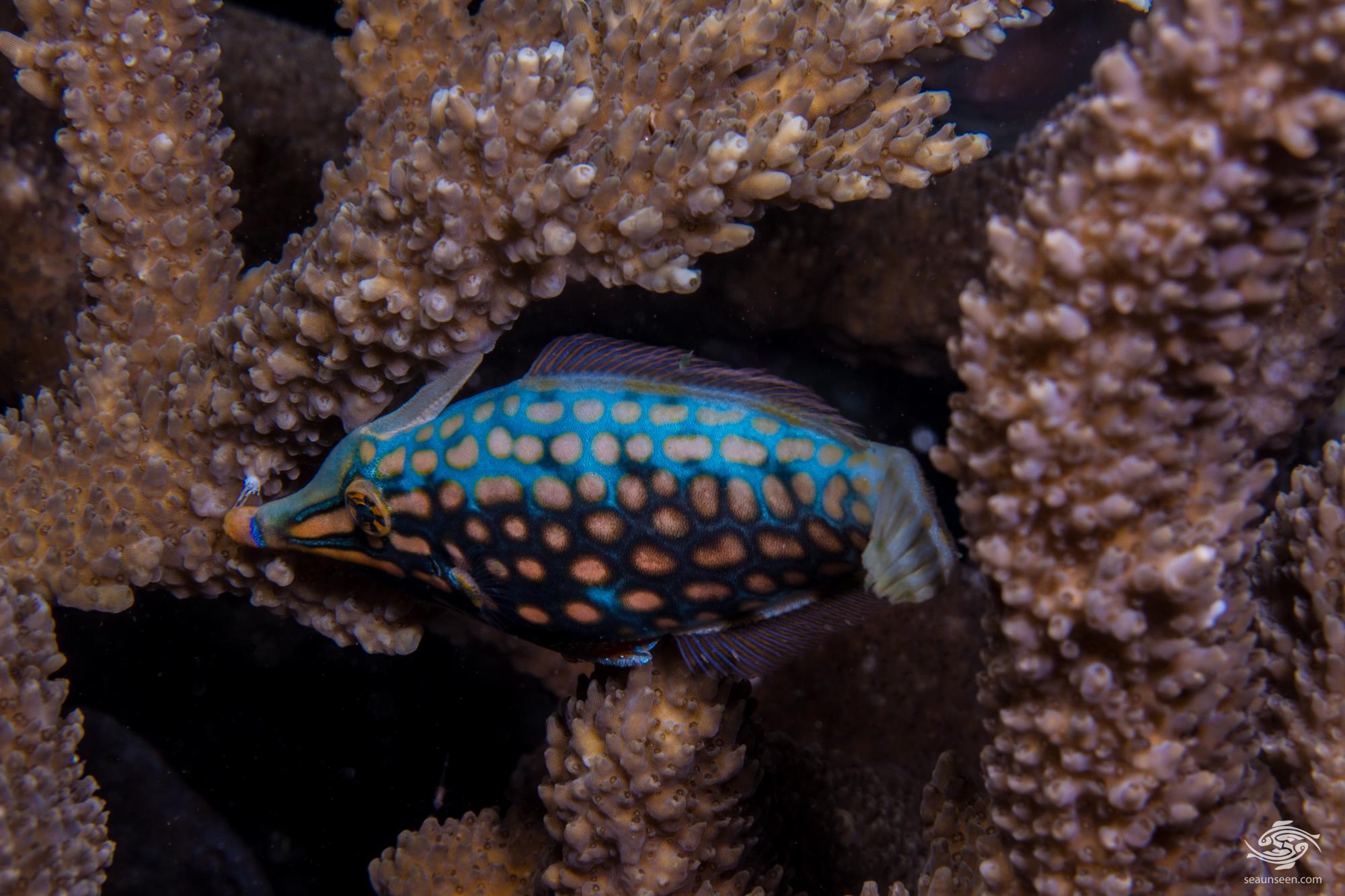 At night the fish will anchor inside acropora branches to camouflage itself from predators. As can be seen in the image above, they have the ability to at least darken the lower section of the body, presumably for camouflage purposes. Some research indicates that the chemicals the filefish absorbs from the acropora coral camouflages it chemically, giving predators the chemical impression that it is just a piece of acropora coral. This is possibly the first evidence of such behavior in a vertebrate. 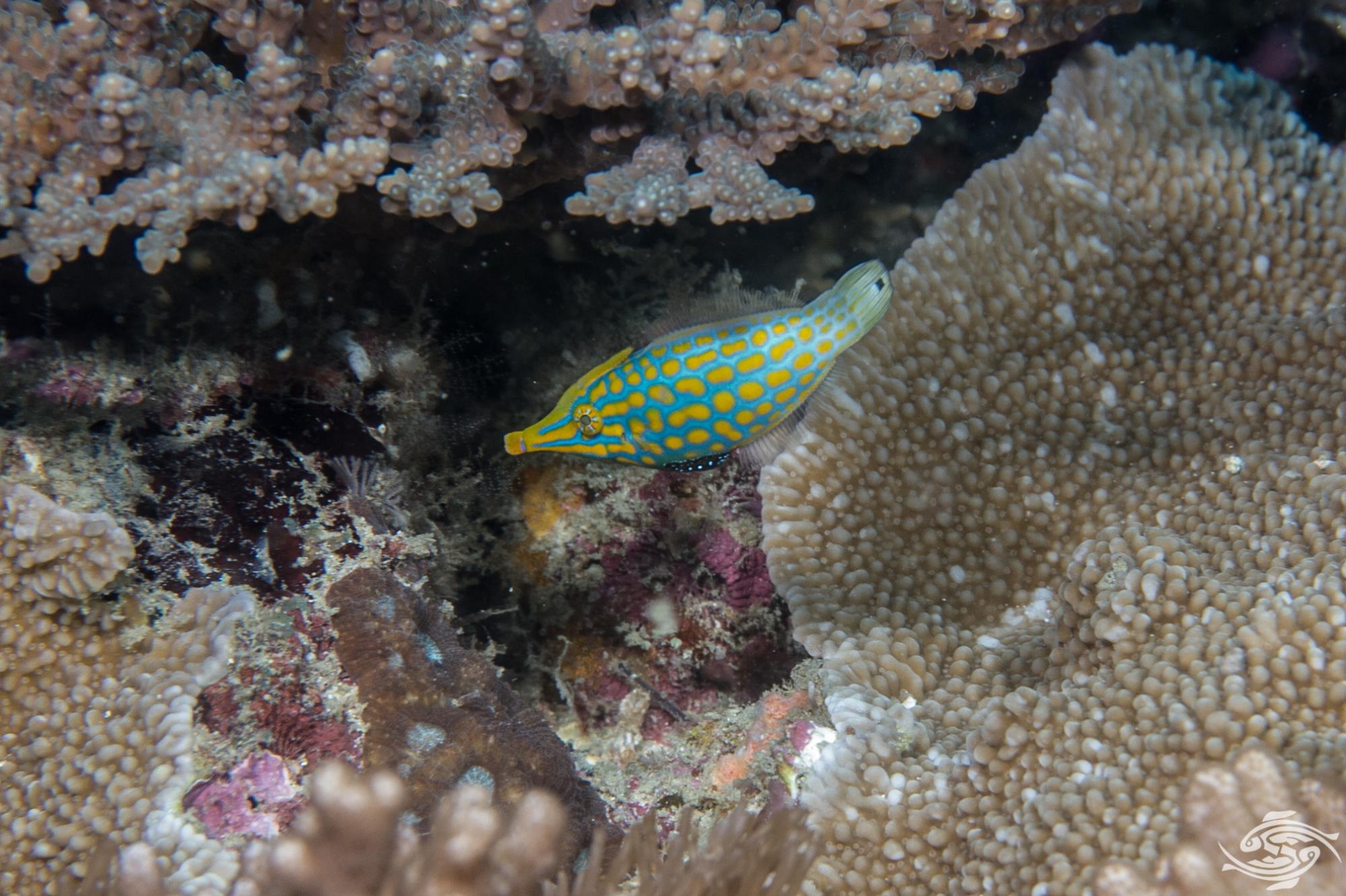 Orange spotted filefish are found across the Indo Pacific area on coral reefs from depths of 1 to 30 meters. In Tanzanian mainland waters they are far more common from 3 meters to 12 meters in depth and it is rare to see them deeper. 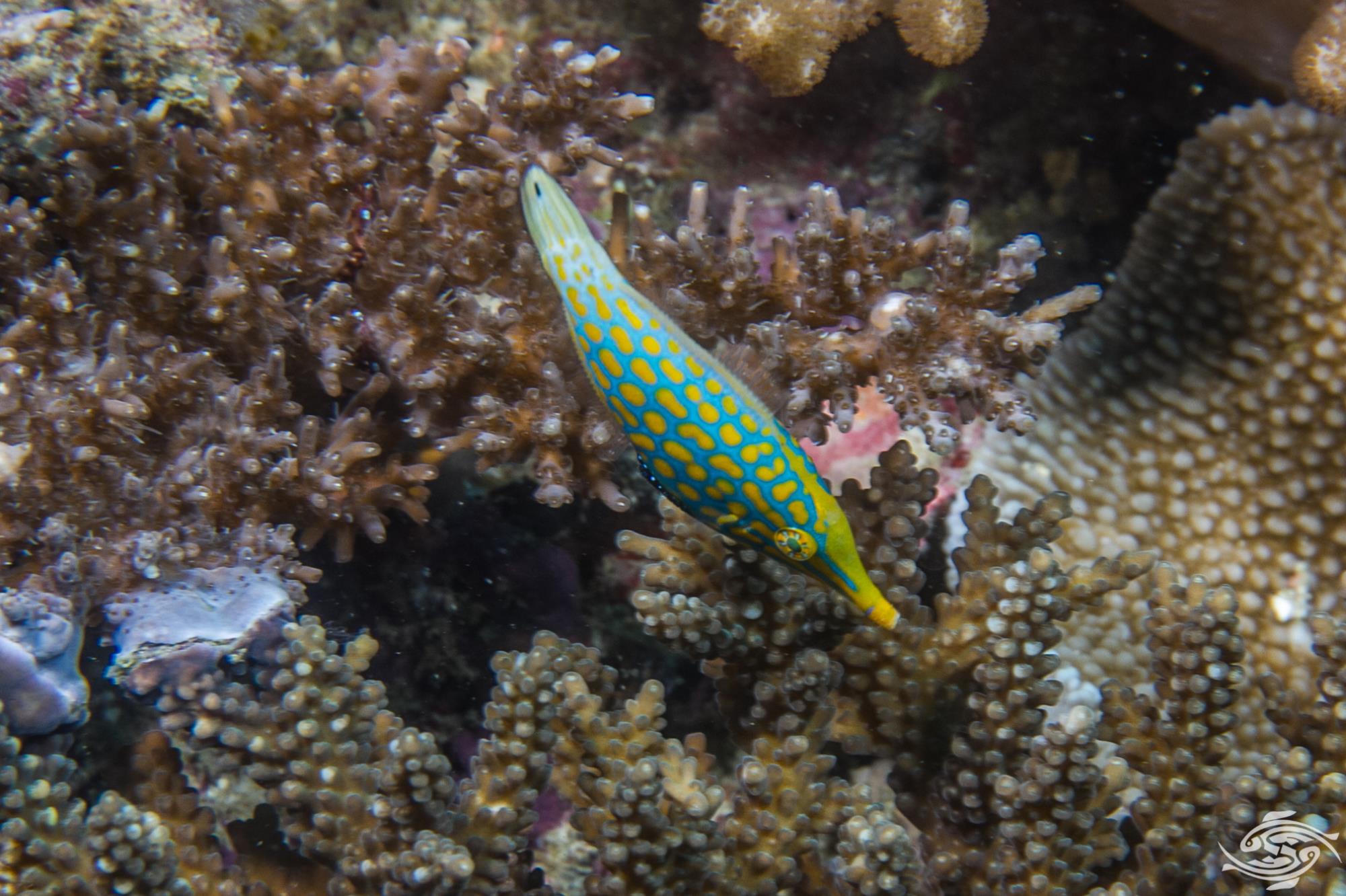 Their diet is highly specialized. They use their long snout to nip off the coral buds of Acropora millepora corals, biting off the polyp without biting the skeletal  cup. Recent research in Australia in areas where massive coral bleaching has taken place and all the acropora corals have died indicates that they will starve to death rather than switching diet. 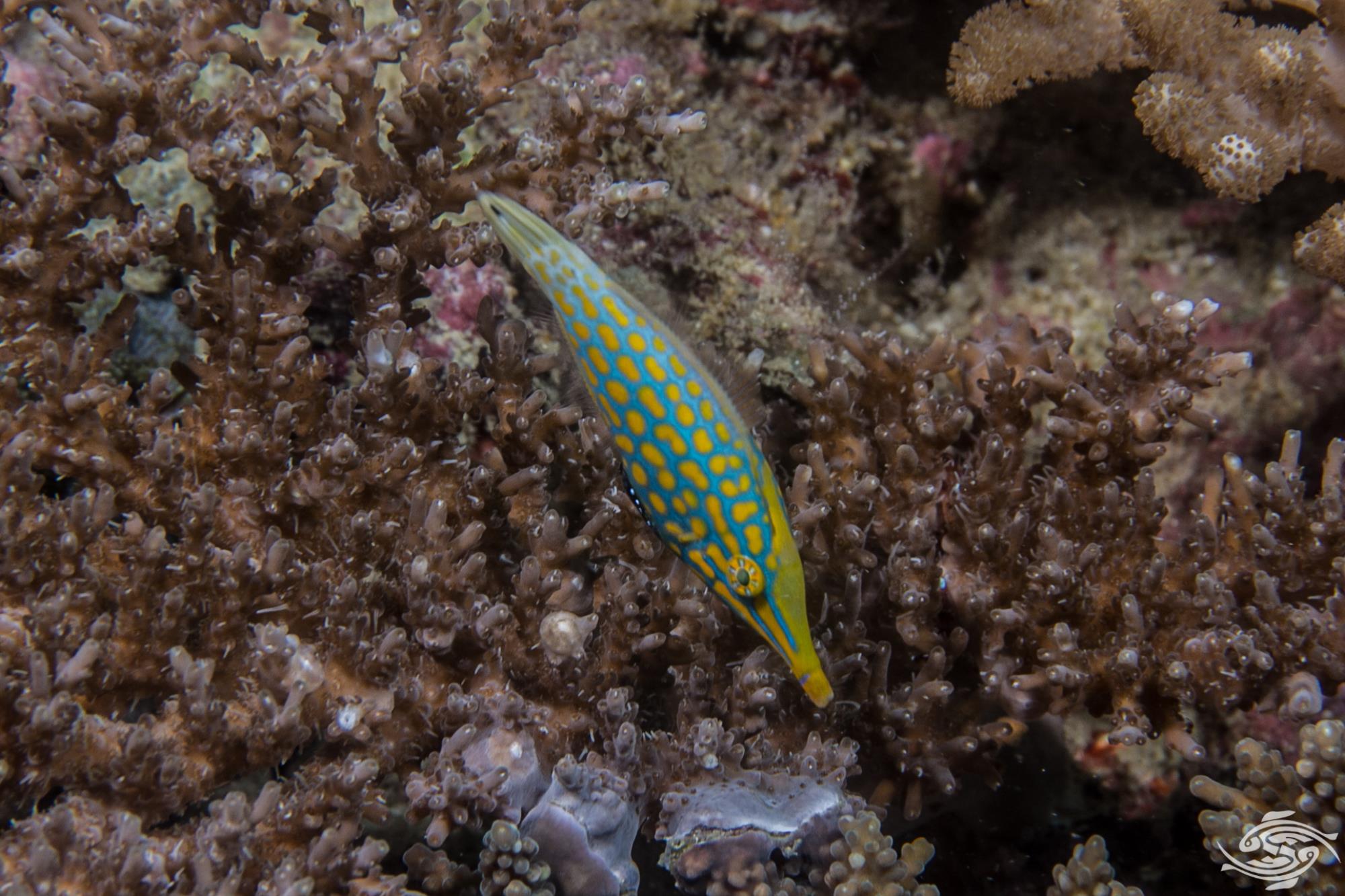 Spawning takes place in prepared areas on a substrate and the eggs are guarded by the parents.  Once the eggs hatch the juveniles are initially pelagic. 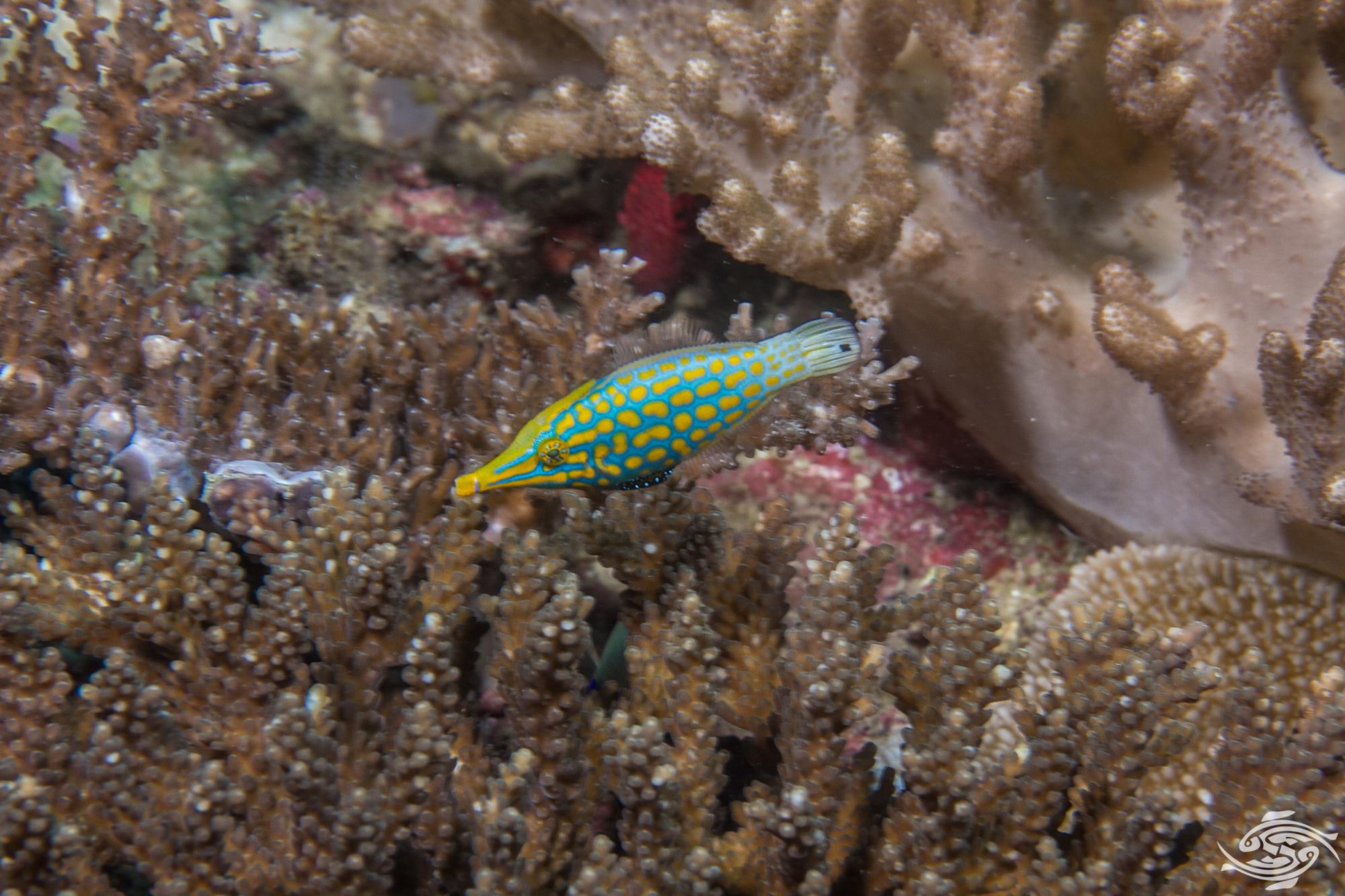 Strangely given the observations that they will starve if the acropora corals die out in the wild, aquarists have been able to wean them onto brine shrimp and other prepared foods. They will nip on acropora corals if they are in the tank. 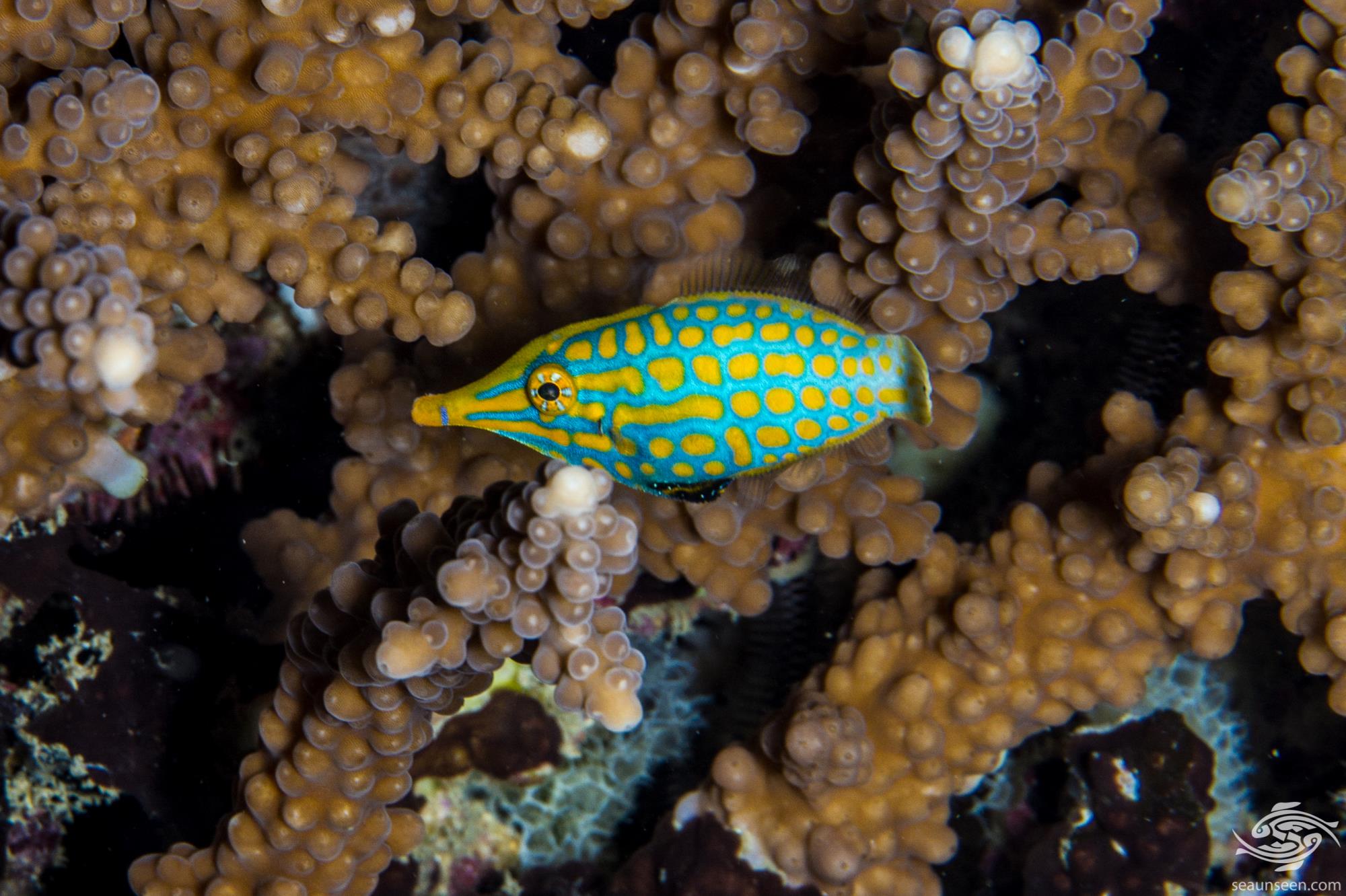 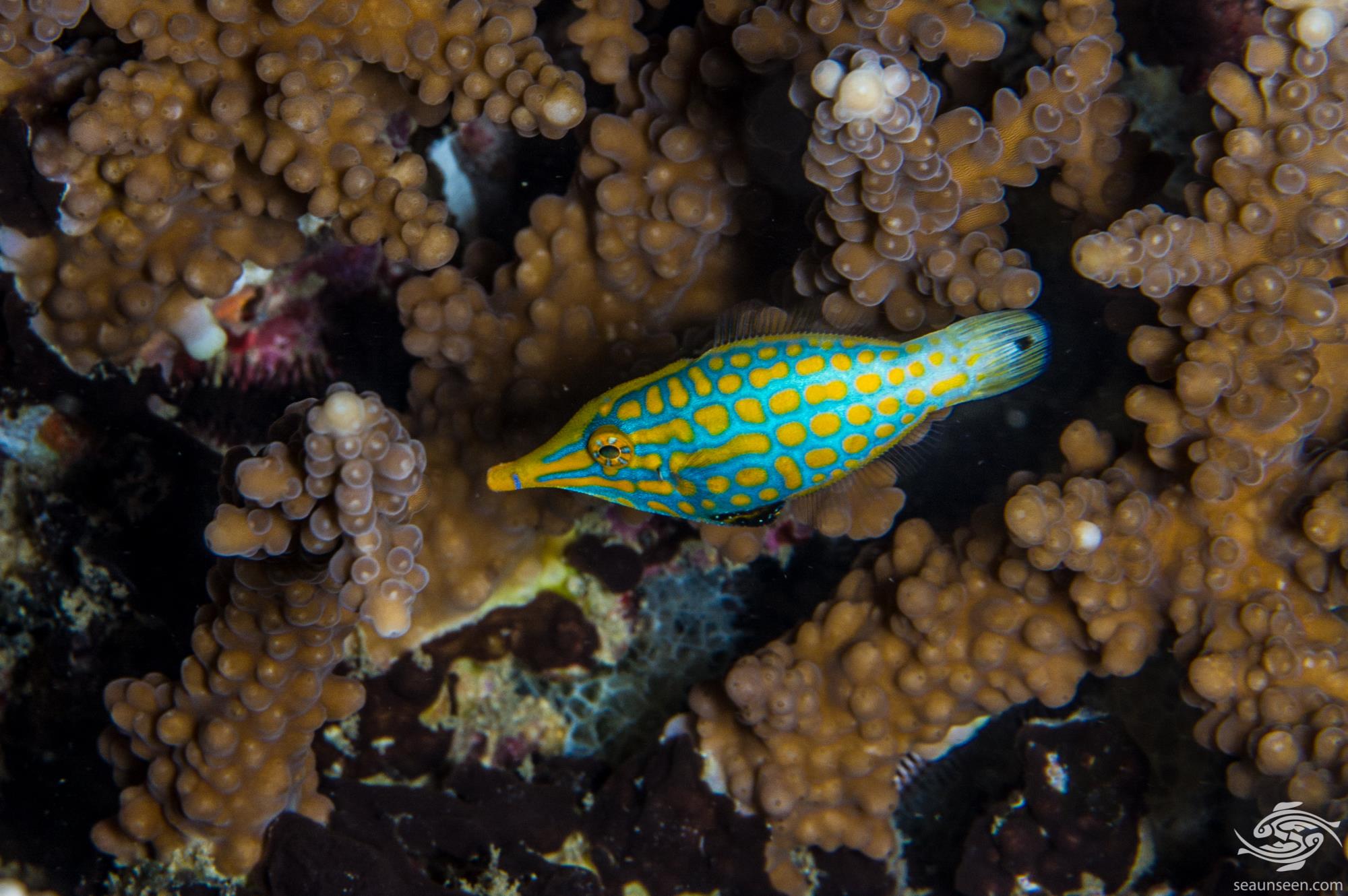 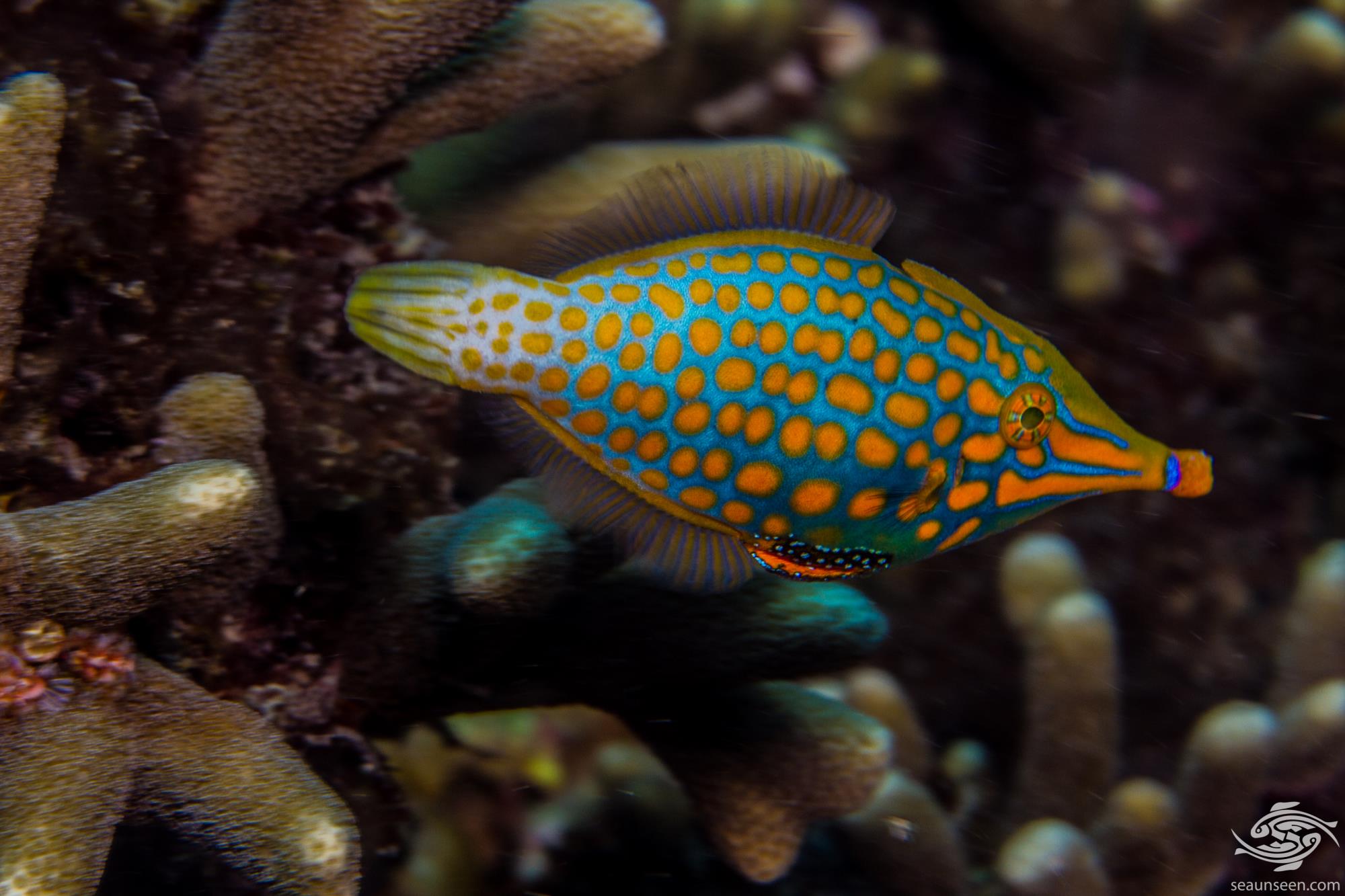