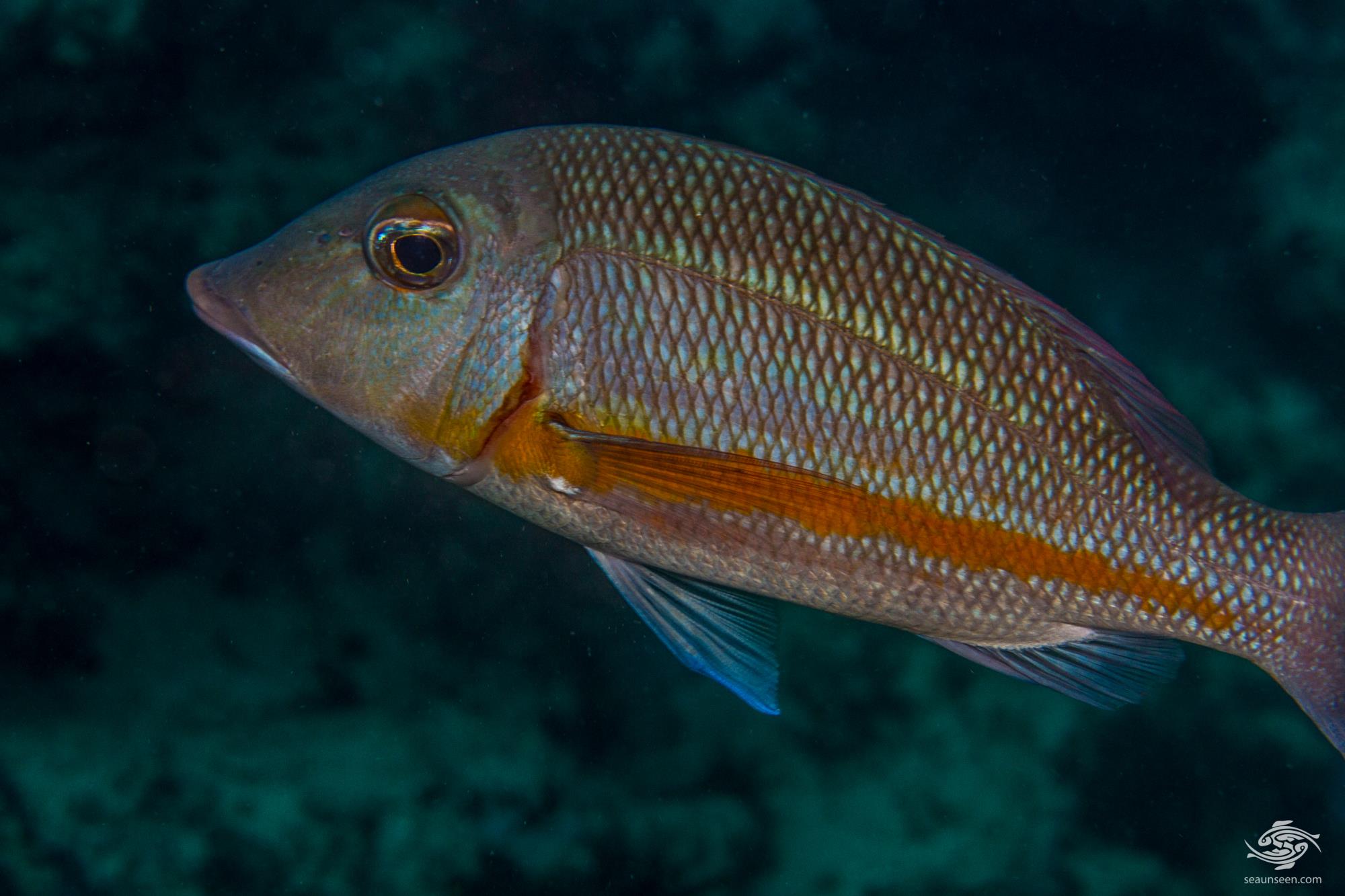 The Orange striped Emperor (Lethrinus obsoletus) is also known as the Yellow-banded Emperor and the Yellow stripe Emperor. They are fairly common inhabitants of rubble areas and reef sides on the Tanzanian Islands but are not as common on the mainland. 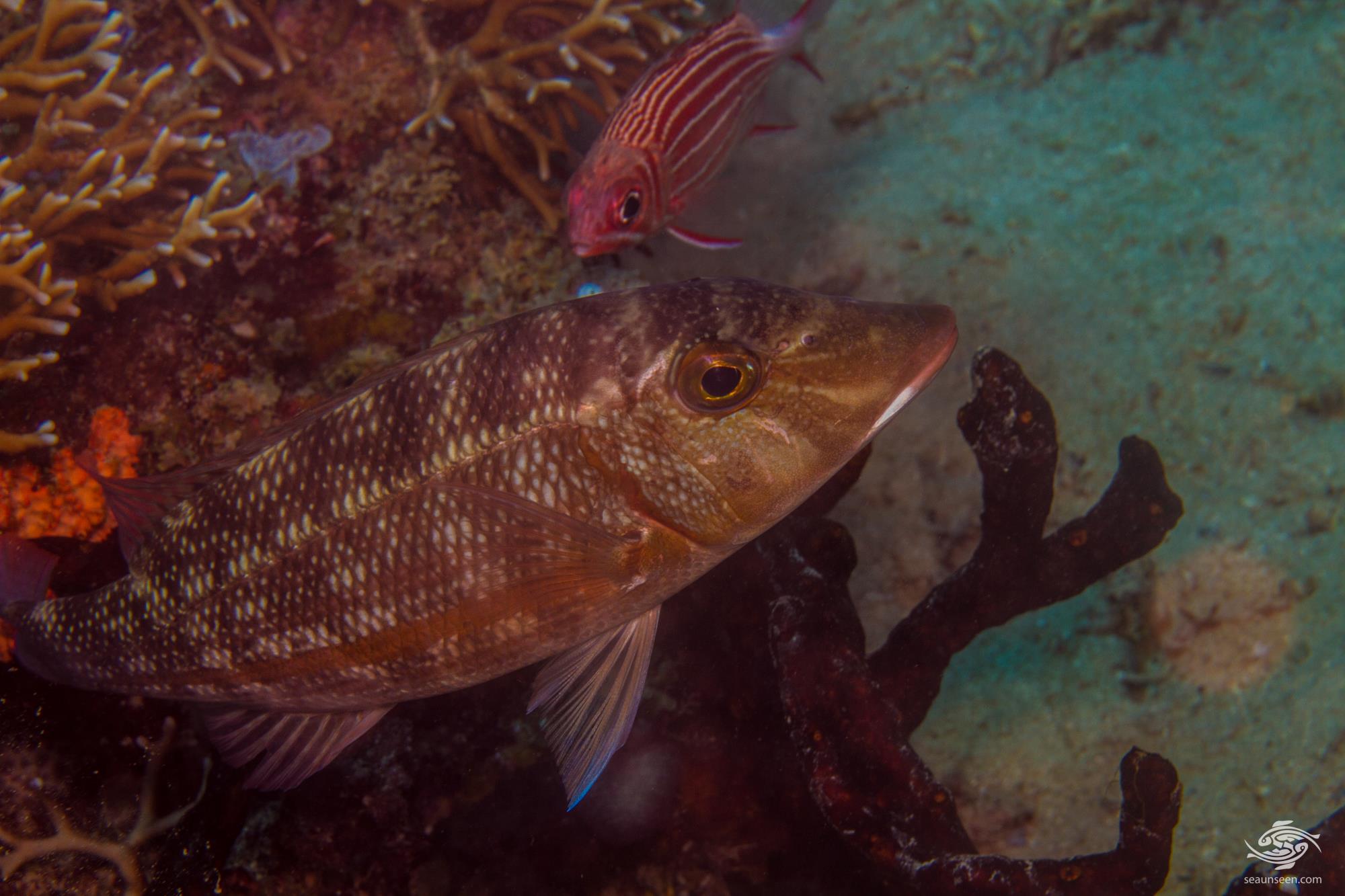 Orange striped Emperor have a typical emperor body shape with a slightly humped back and a long sharpish face and jaw. They are capable of fairly dramatic color changes as can be seen in the images above and below.  The more typical colouration when they are swimming in open water is a silver orange color with a slightly oblique distinct orange line across the lower body. The eyes are ringed in Orange and the fins are translucent.

However they can quickly change to a mottled brown possibly for camouflage or stress related reasons. The orange stripe is still evident but is not as prominent. The largest specimens we have seen have been around 35 cm however they grow up to 60 cm. Research in Guam indicated that a 30 cm specimen was approximately 11 years old with a weight of 500 grams. 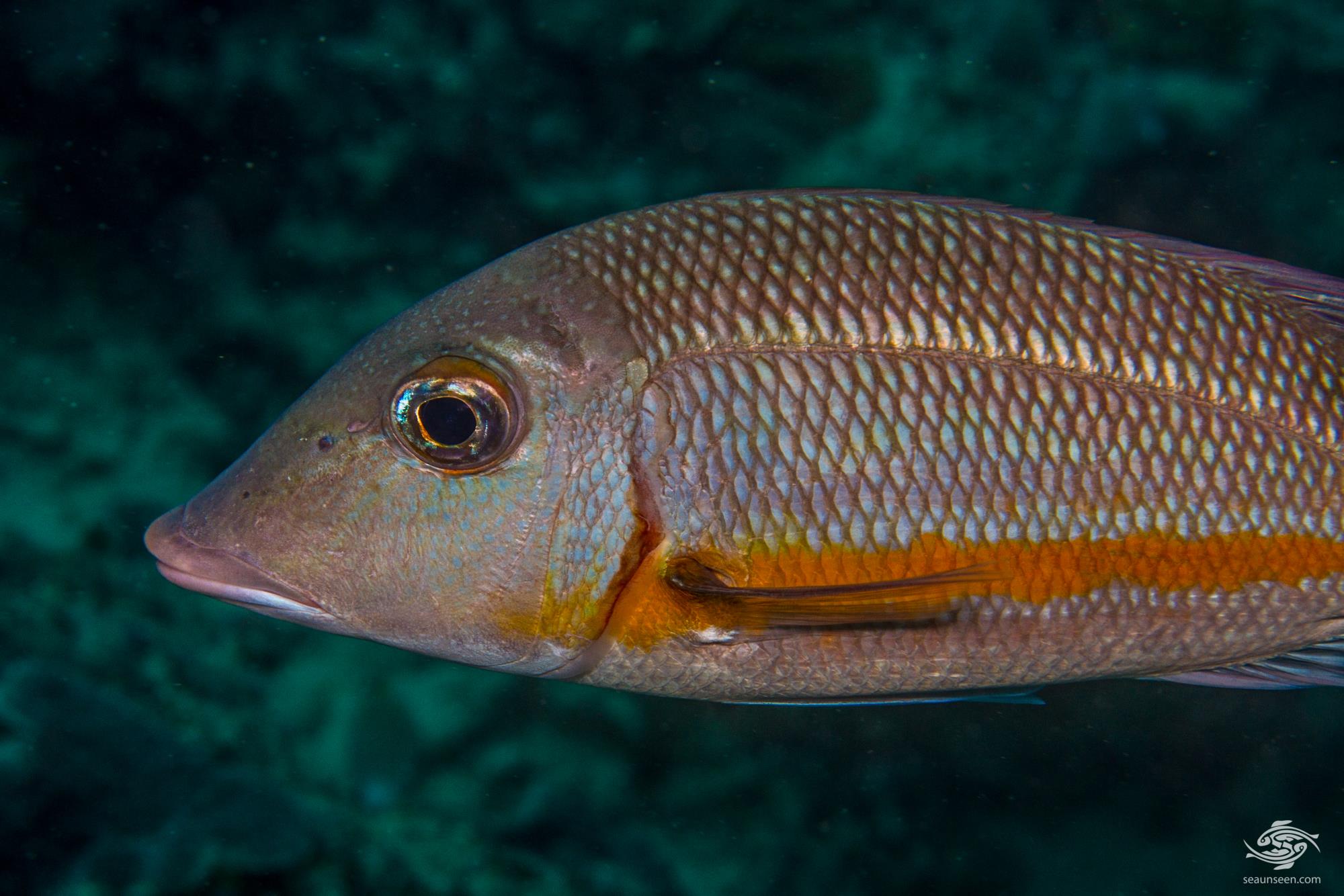 ORANGE-STRIPED EMPEROR IN THE WILD

The Orange striped Emperor is often seen in small groups but is sometimes seen solitary, mainly on the edges of reefs and in sandy rubble areas.  The juveniles seem to prefer grassy beds and are usually seen singularly in grassy beds.  They are fairly easy fish to get close to but will swim off if one gets too close.

Orange striped Emperor  are widely distributed across the tropical Indo-Pacific, from East Africa up to the Red Sea and across to the Polynesian islands and down to North Eastern Australia.  We have seen them  on reef sides and on rubble areas down to depths of approximately 20 meters although they are found deeper. 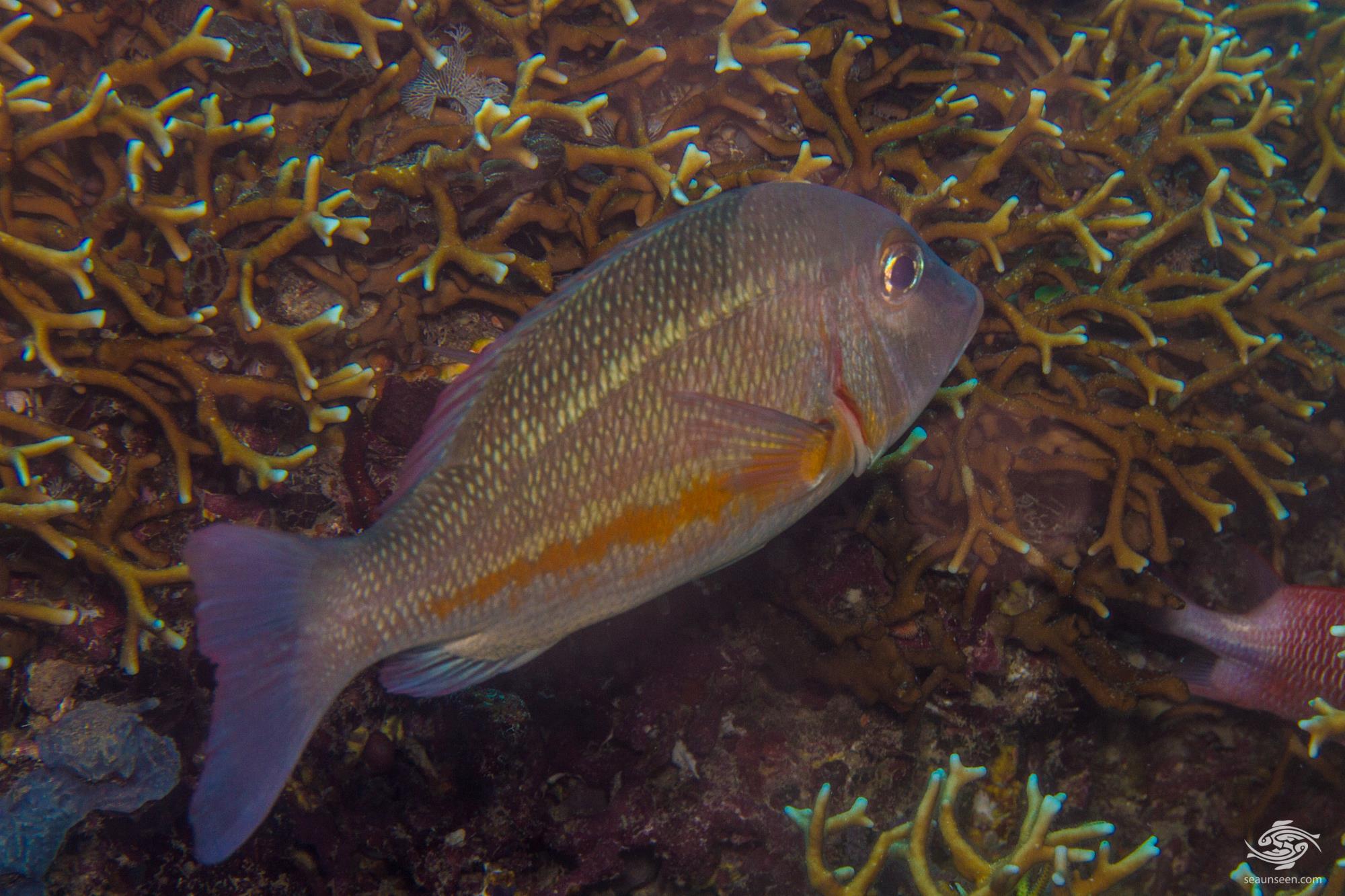 Orange striped Emperor have a varied diet, feeding on mainly on crustaceans,  mollusks and echinoderms but they will probably also take small fish. Their diets vary with maturity and locally available prey items. 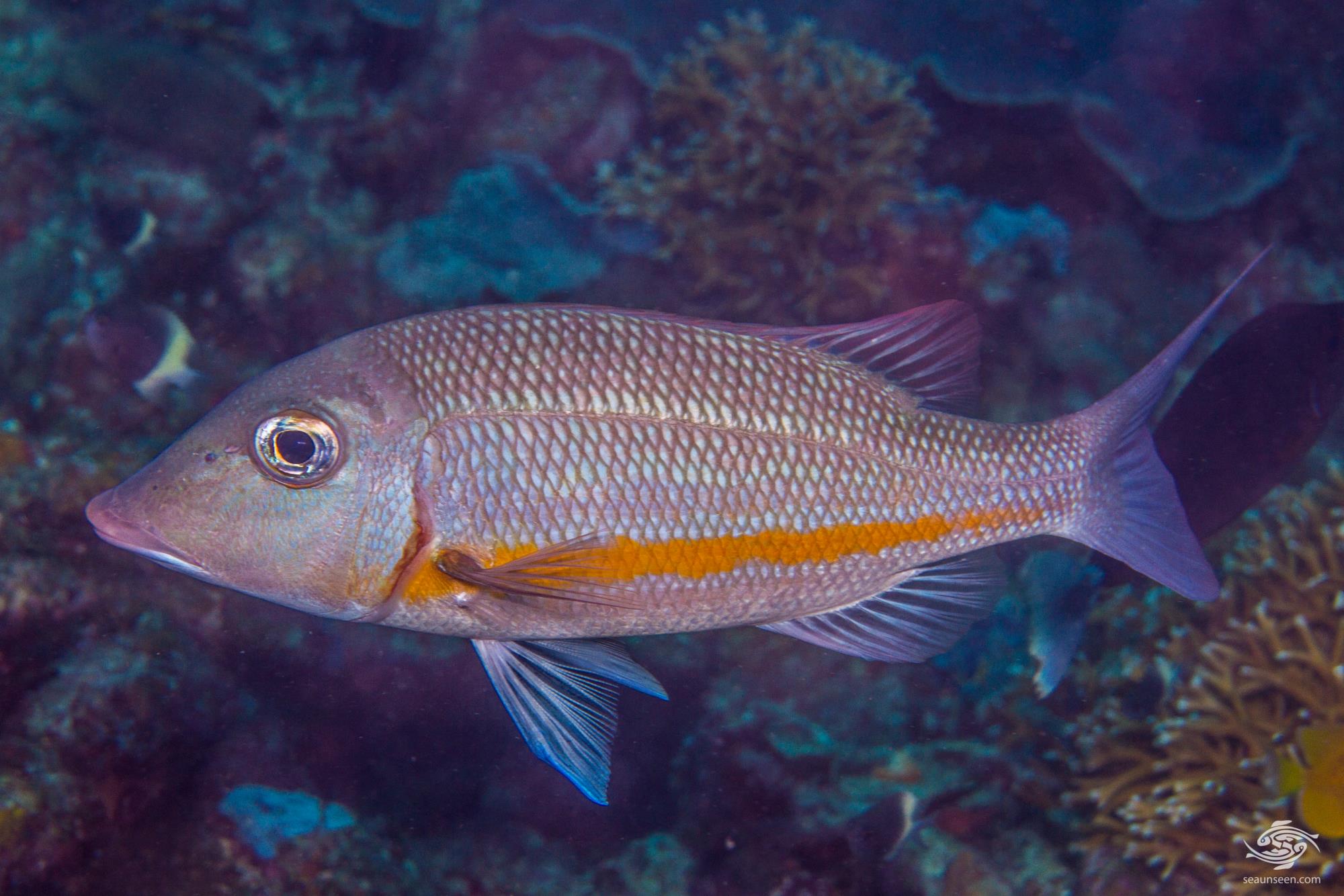 Orange striped Emperor are slow to mature and reach sexual maturity around 19 cm at three years of age. This makes them highly vulnerable. Usually they are territorial, but they congregate in spesific areas for group spawning on the moon phases. The eggs are released into the water table. The eggs which are round and transparent float and hatch after 18 hours. 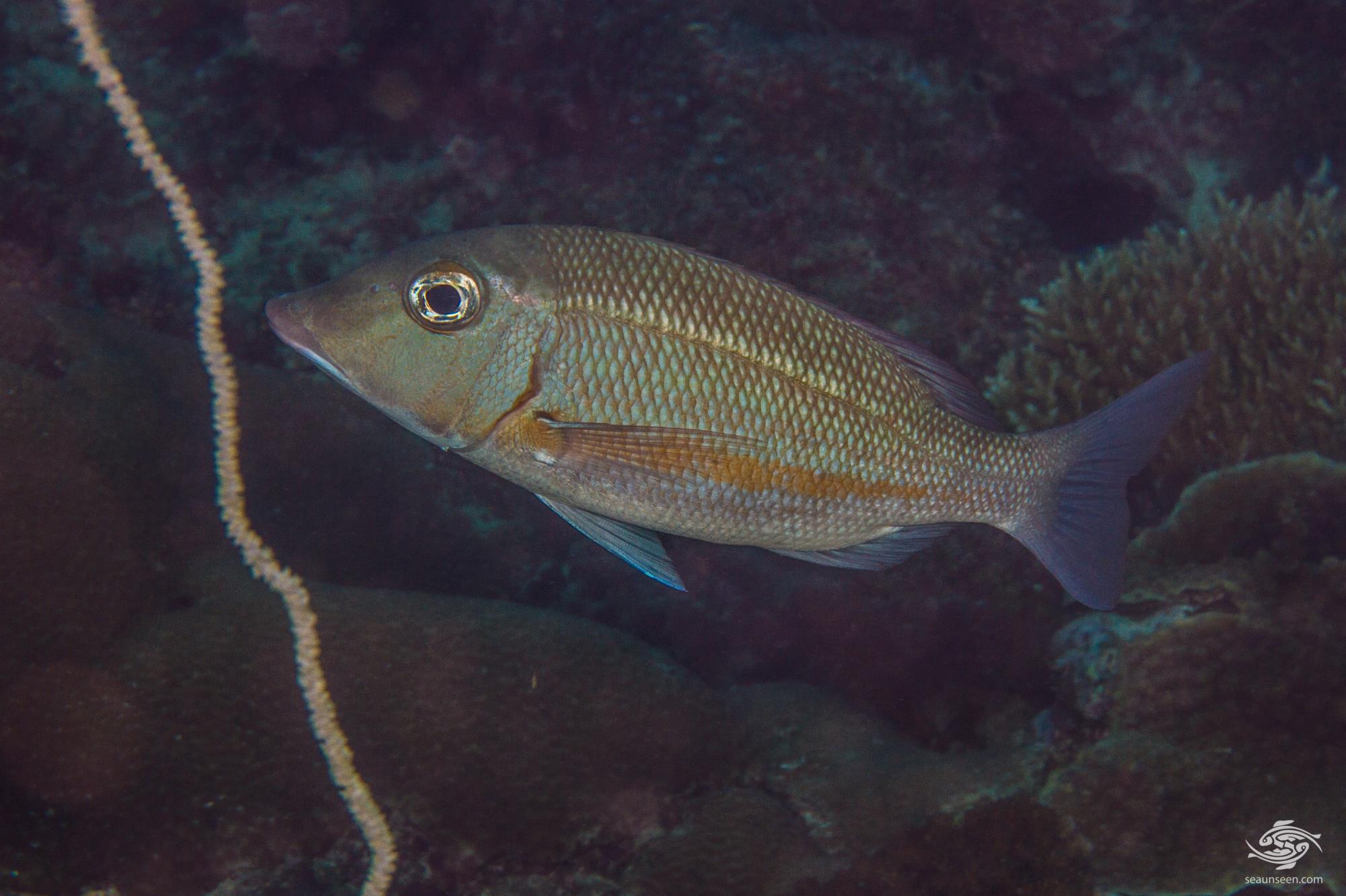 Orange striped Emperor are heavily exploited commercially in most areas as they are tasty to eat and relatively easy to catch.  In Tanzania they are caught by fishermen in traps and on lines and are occasionally netted or speared in the shallows. They are usually sold fresh. Many local fishermen are aware of their spawning times and locations and gill net them. This has a destructive effect on population levels.