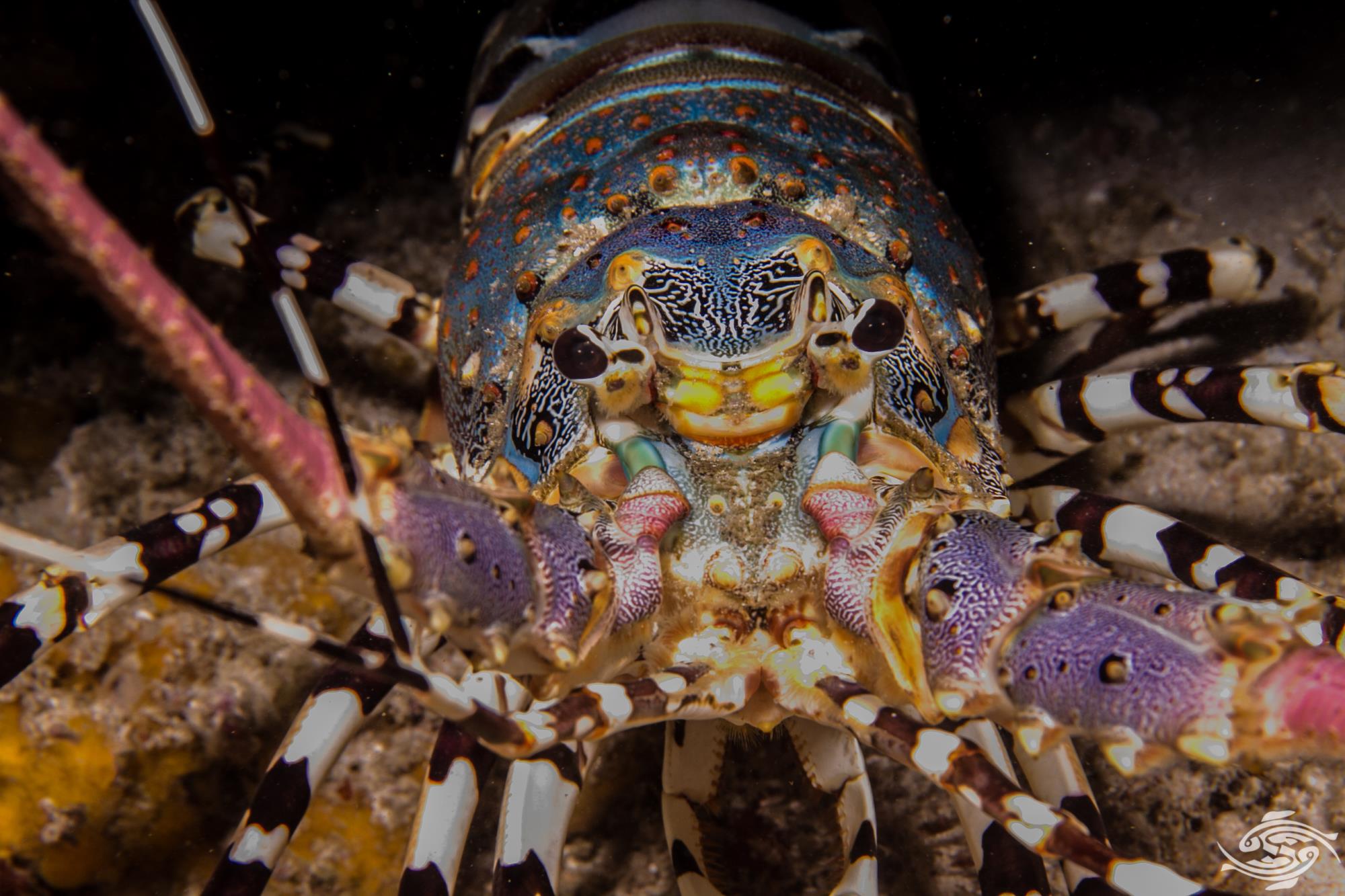 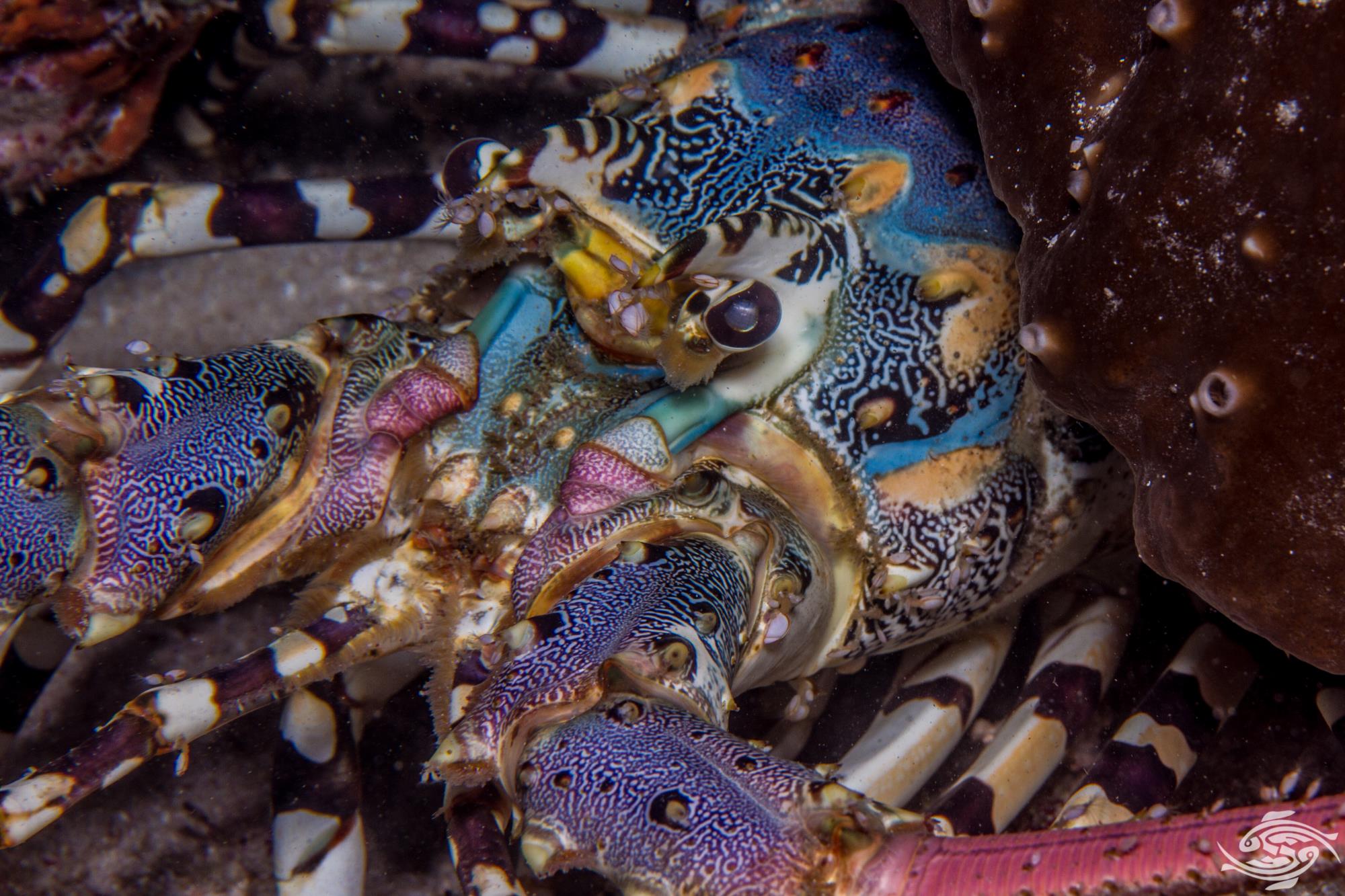 Ornate spiny lobster grow to a maximum length of 50 centimeters (not including the long feelers) but most are smaller around the 30 to 40 cm range. The body is covered in a hard carapace with numerous forward pointing orange spines with two prominent forward facing spines between the eyes. The tail is covered in a segmented carapace allowing it to  flex and provide powerful rearwards propulsion. The tail has a fan on the end with assists with propulsion when flared out.

They have two sets of feelers, one  large pair covered in spines which can fold backwards and can be used for protection. When cornered they extend these feelers towards the threat. On the Ornate spiny lobster these are purple on the lower segments and pink on the upper segments. A smaller pair of branched feelers with sensory organs sits in between the large feelers.  The carapace is a blue color with orange spines. The tail is a blue color with blue-black stripes on the back of each segment . Protruding eyes give them good all round vision. The legs are white lined with black stripes. 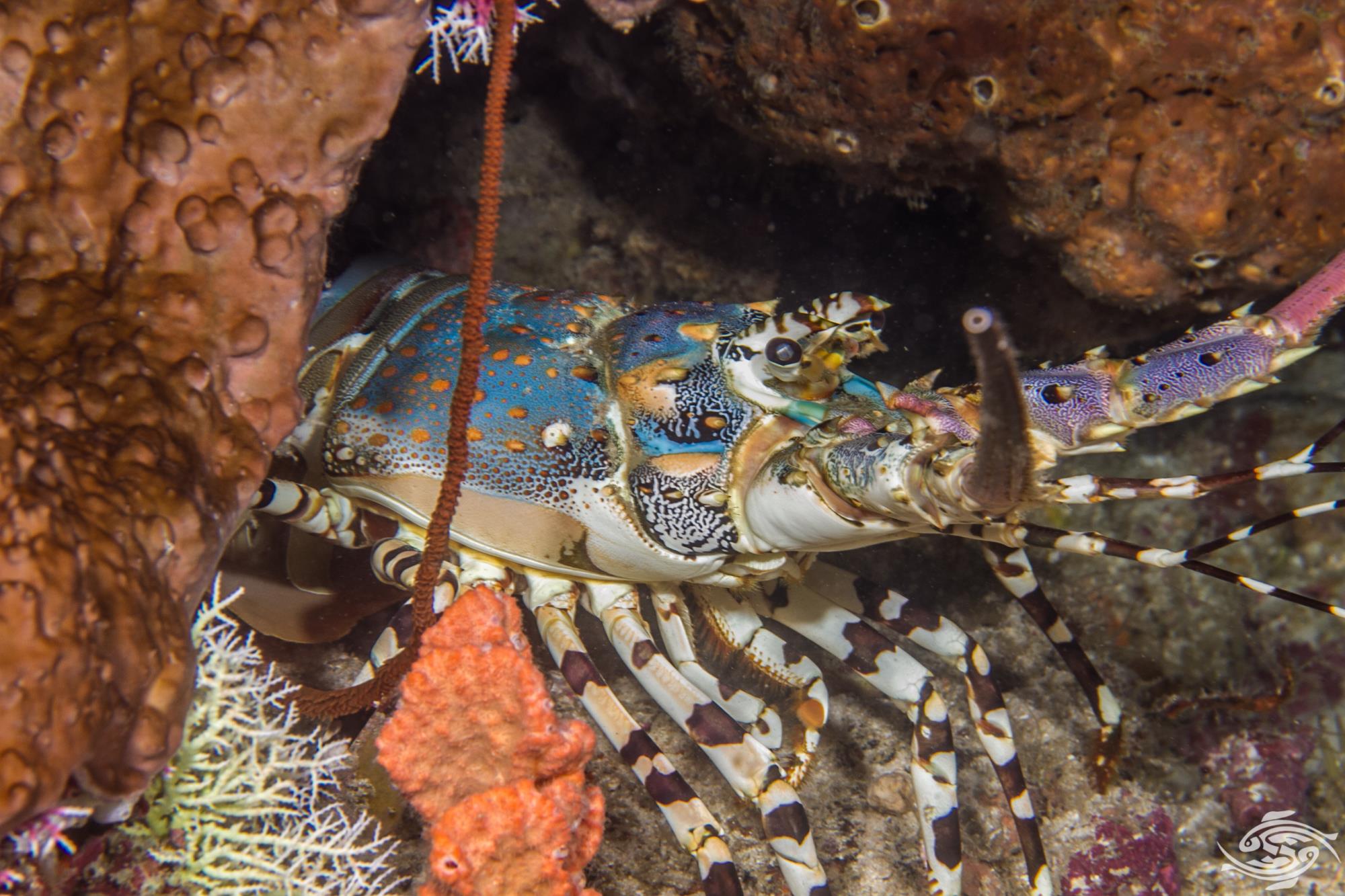 Ornate spiny lobster are nocturnal and are rarely if ever seen out during the day. They hide in holes and crevices during the day, sometimes with their feelers extending out. The feelers are long and have sharp spines on them and are used to fend off predators. Often only the smaller branched feelers are extended out and because of the contrasting black and white bands white bands this makes them easy  them easy to spot. They are extremely shy and will usually quickly retreat into a crevice or hole at the sight of a diver or predator. Once they are firmly wedged in a hole they can be remarkably difficult to remove and their sharp spines often cause injury.

They can swim backwards quite quickly to escape predators by flapping their tail. Compared to other lobsters they do not hide in communal holes and will often be seen on their own.  Other species of lobster are often found in the company of moray eels but we have yet to see the Ornate spiny lobster sharing a hole with a moray eel.

As with all crustaceans they change carapaces and when the new one is ready they pull out of the old carapace. The new carapace takes a day or two to harden and they are extremely vulnerable to predators at this time. At night they come out to feed and can often be seen on the reef top. They usually stick close to cover and when threatened will use their powerful tail to jet them backwards to safety. 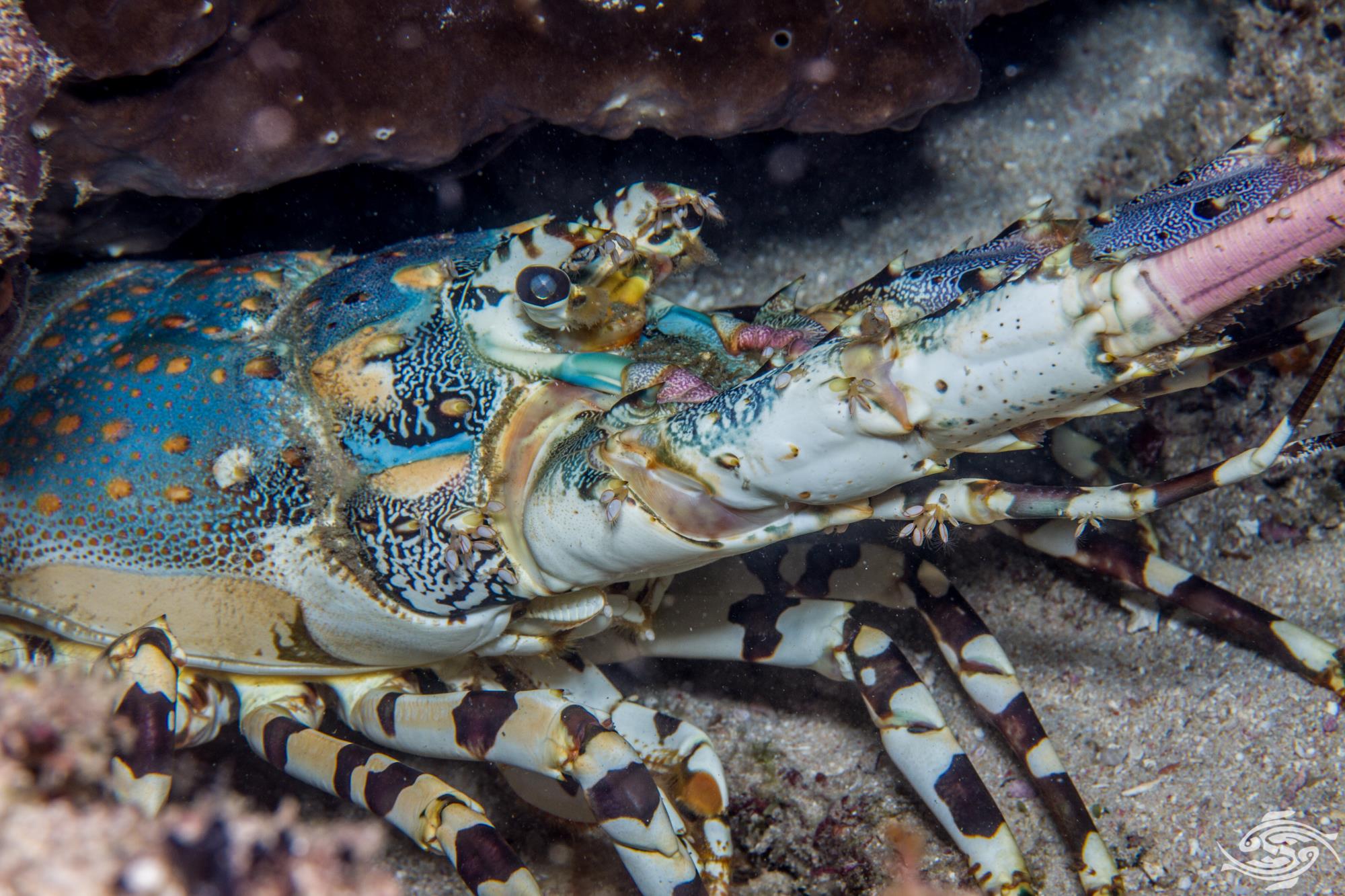 They are found on rocky and coral reefs usually shallower than 18 meters but can on occasion be found deeper and we have seen them at up to 27 meters on some reefs which is where this specimen was photographed. During the day they are found hiding in holes, crevices and under overhangs. 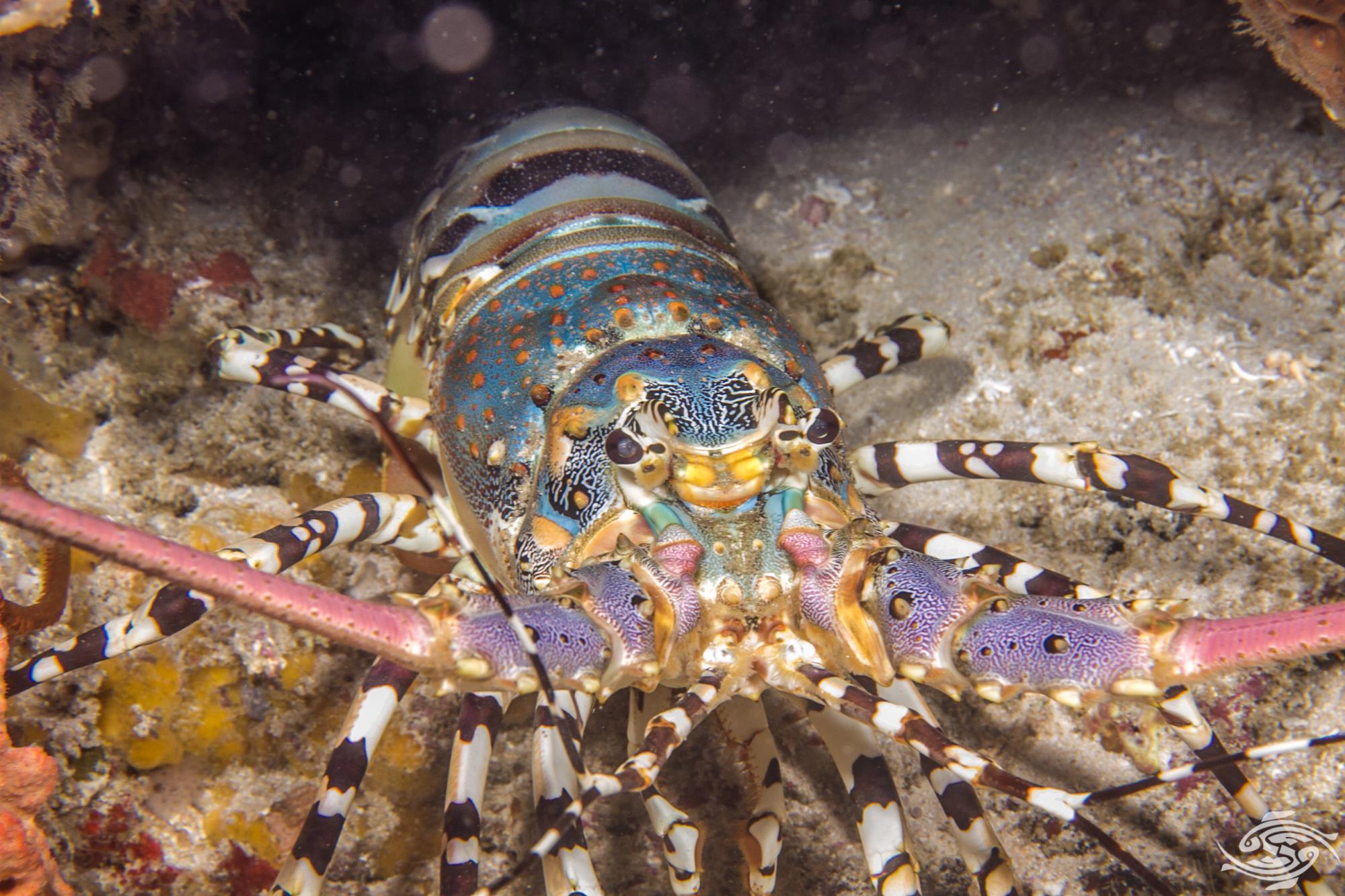 Ornate spiny lobster are nocturnal feeders and eat a variety of mollusks, shrimp, crabs, worms and sea urchins. They use their powerful legs to pull apart mollusks. Their main predators include triggerfish, groupers and octopuses. The mouth parts can be seen in the image below. 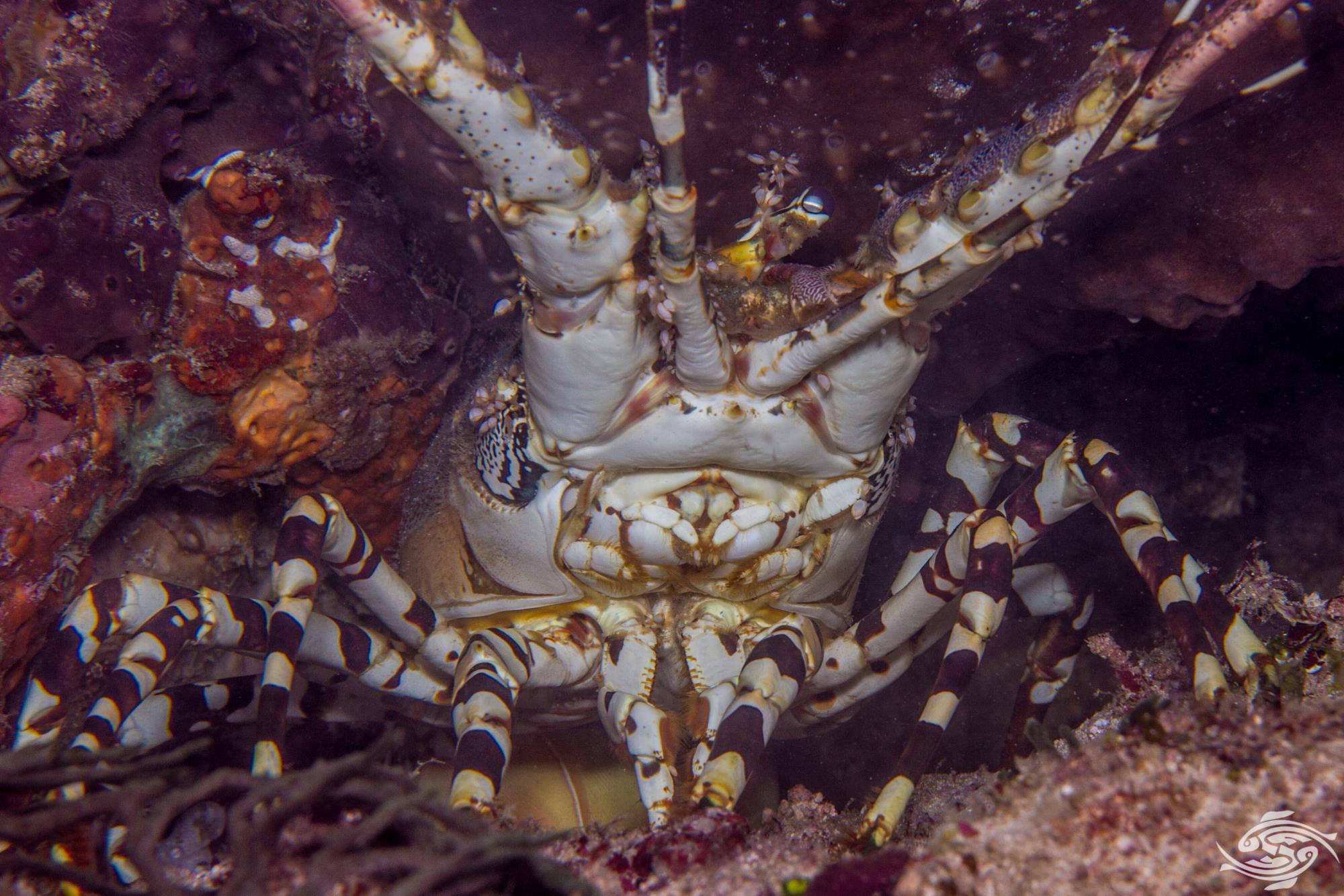 Ornate spiny lobster have separate sexes and at maturity which is generally around four to five years they begin breeding. Males deposit a sperm packet on the underside of females and after they ripen they release up to 100000 eggs which are carried under the females tail. Females have specialized attachments (pleopods) on the underside of the tail for the eggs to hook onto. The eggs start off bright red-orange colour and as they develop so they go a dark muddy brown colour. The bright red eggs can be seen in the image below behind the pleopods. 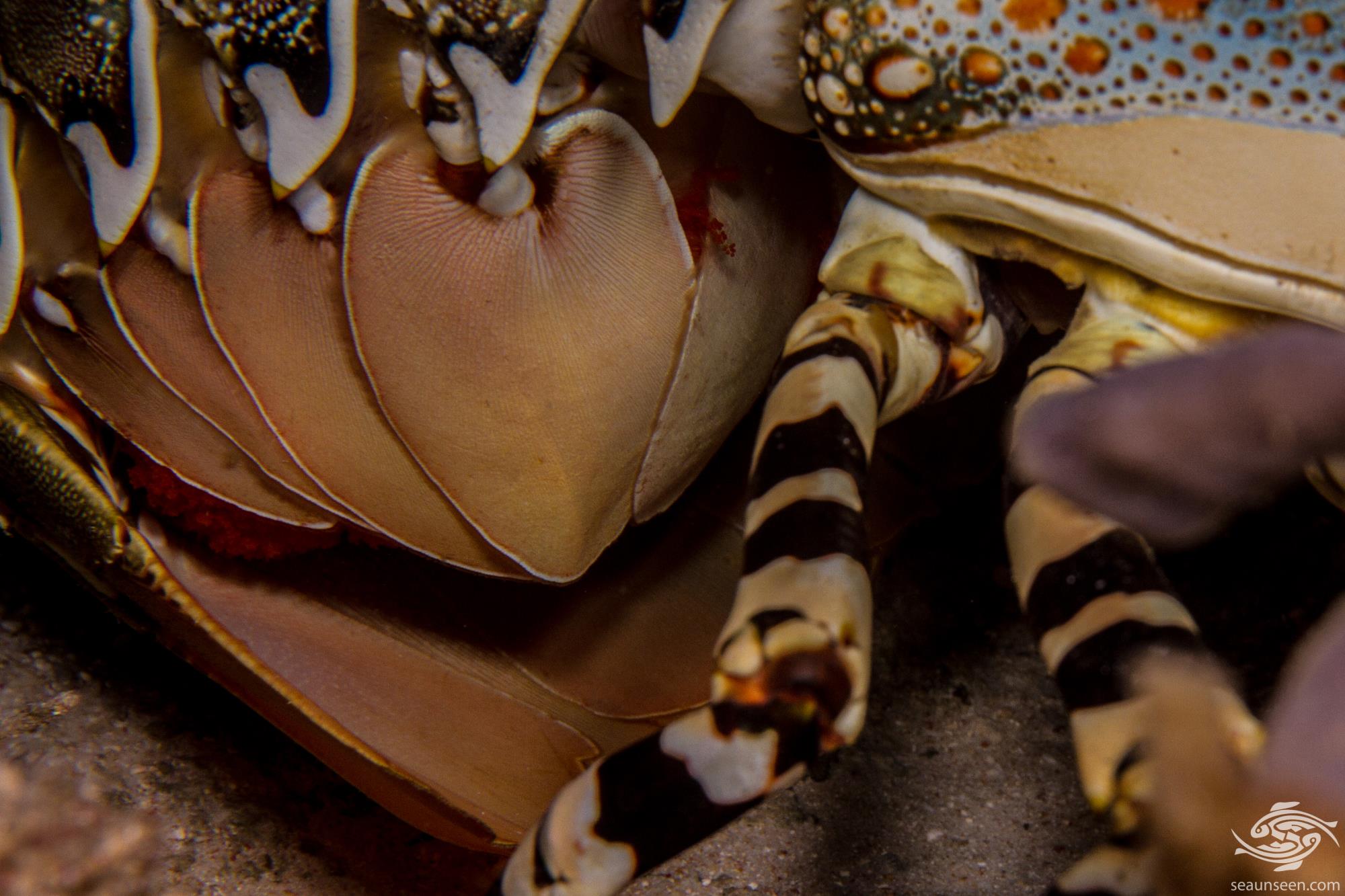 Once the eggs hatch they become planktonic, free floating in the water table for ten to eleven months. Very few of the larvae survive until adult stage. This makes it extremely difficult to breed them commercially. 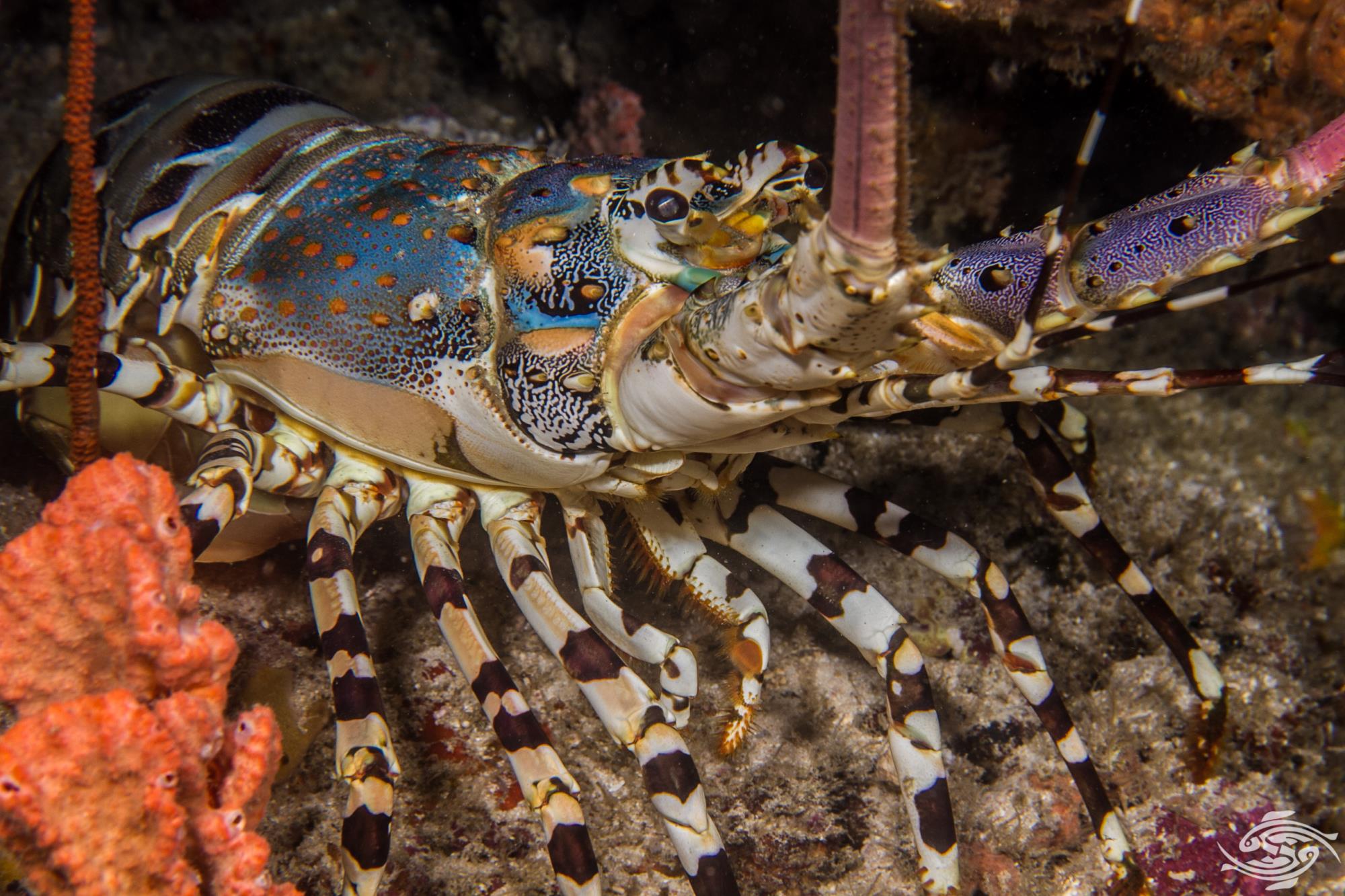 The Ornate spiny lobster are eaten throughout their range and because of the outstanding taste when cooked properly are regarded as a delicacy.  As a result of their habit of scavenging they are easily caught in baited traps in Tanzania and Zanzibar. They are almost certainly over fished in large parts of their range. In Kwa-Zulu Natal in South Africa where this species is not that common, they can be harvested recreationally from March to the beginning of November. 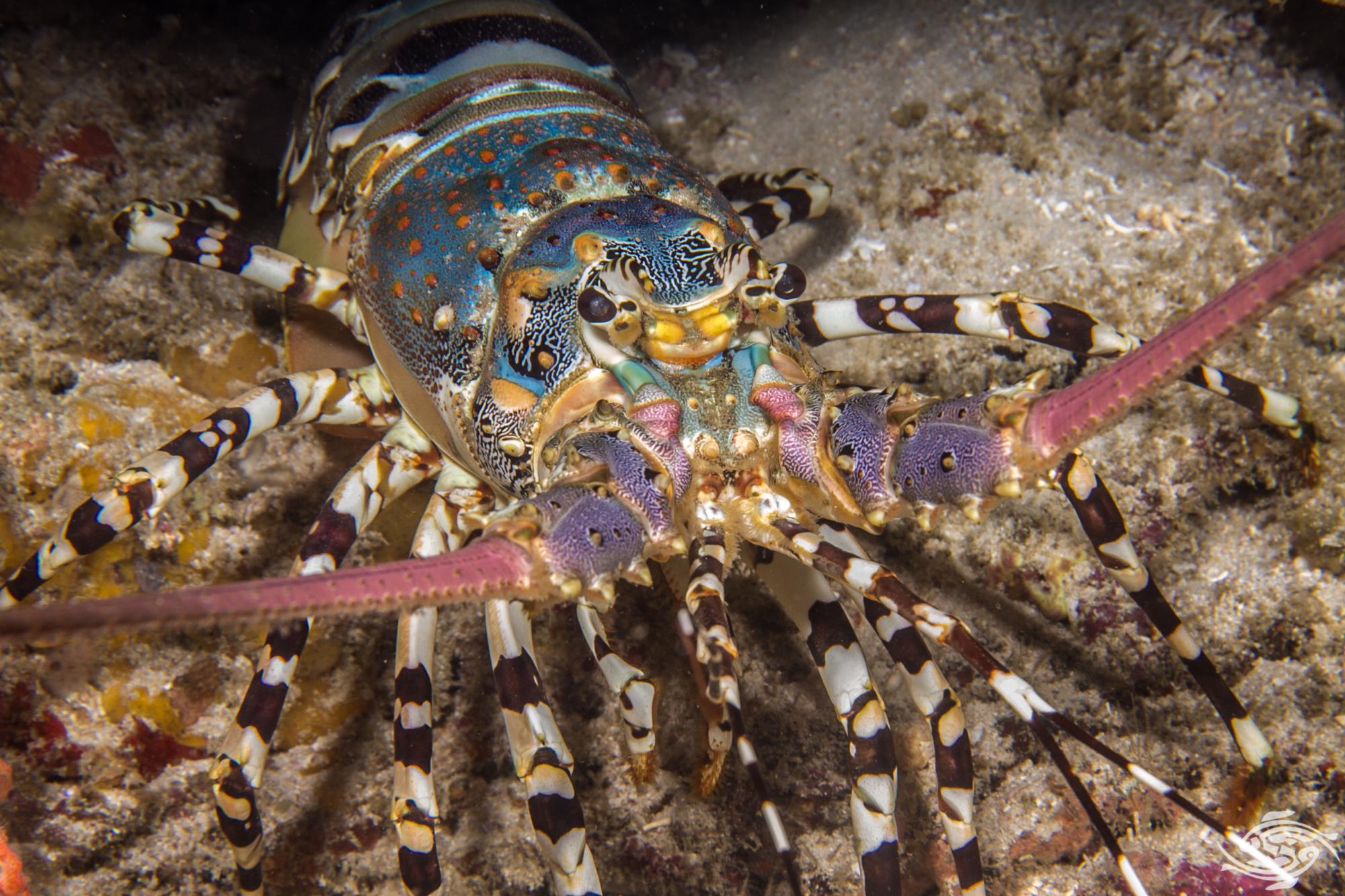