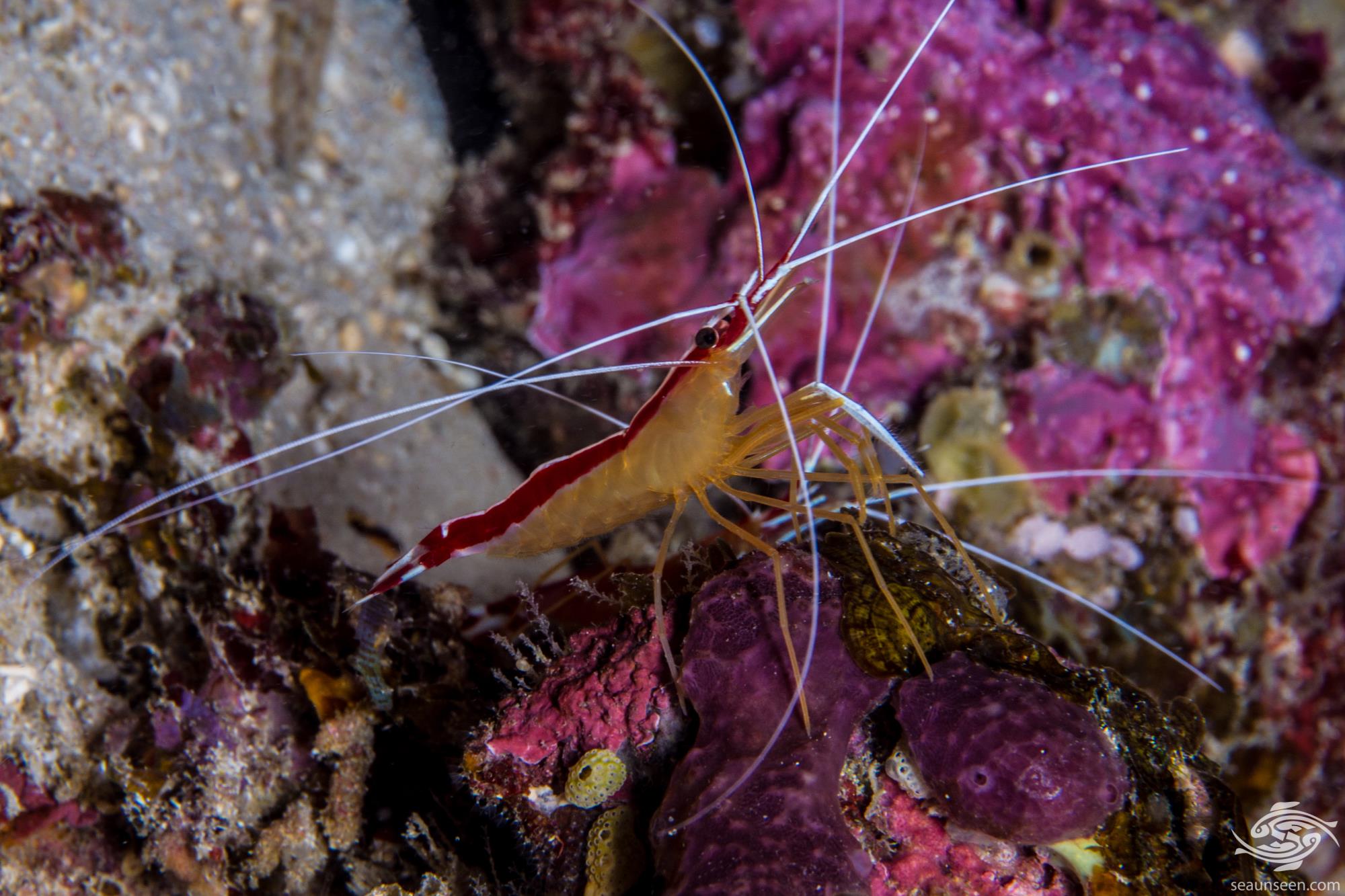 In the image below one can be seen cleaning a wound on a Geometric Moray Eel (Gymnothorax griseus). Because of this symbiotic relationship, in the wild most fish will not prey on the Pacific Cleaner Shrimp however the same may not hold true in an aquarium. Recent research indicates that inflammation is reduced when the shrimp clean a wound. 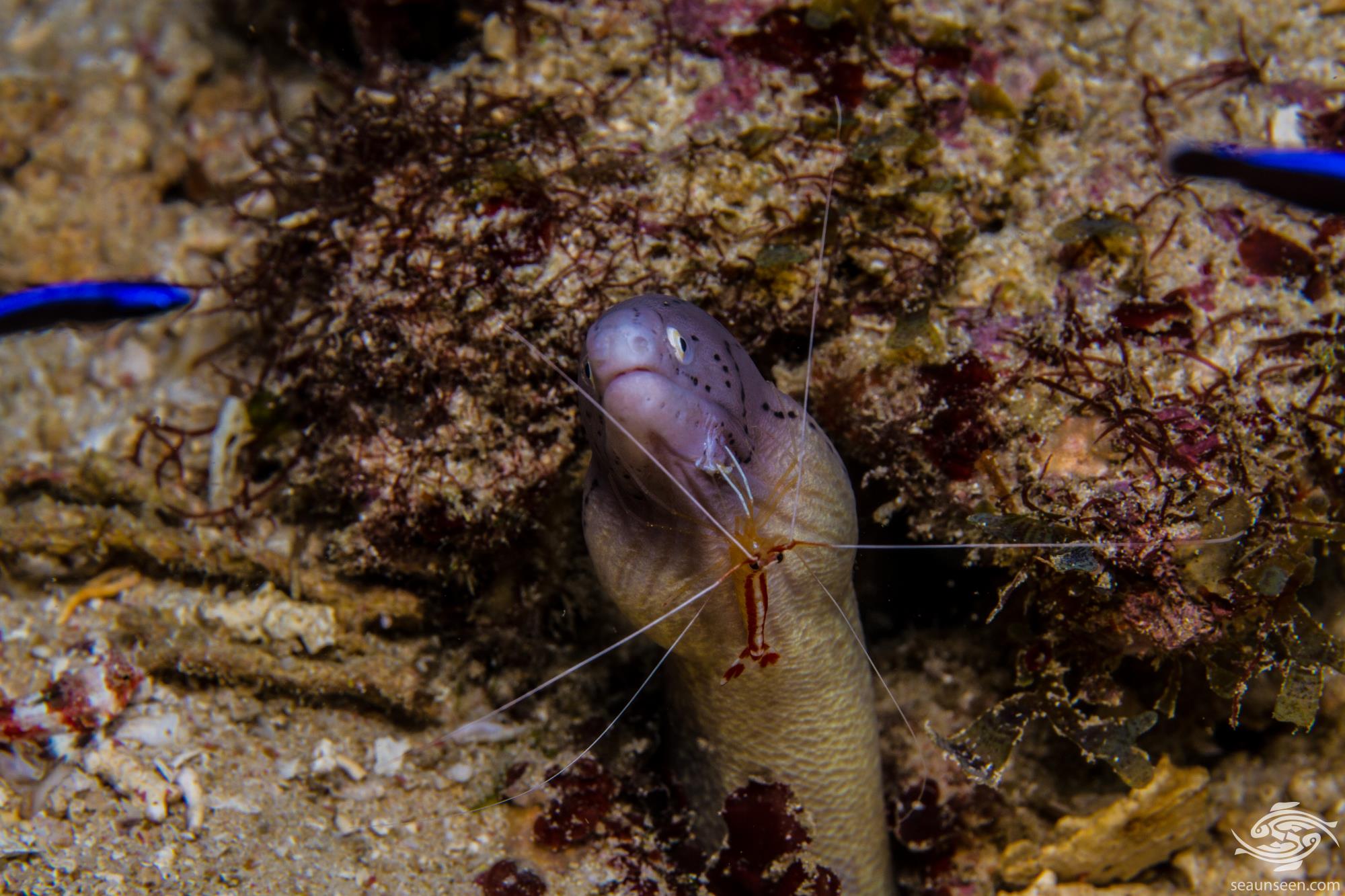 The Pacific Cleaner Shrimp has a maximum body length of 60 millimeters. The lower body is a light yellow brown colour and there is a bright red stripe running down the top of the body which has a narrow white stripe down the center.

They have two sets of long white feelers but one set splits into two as can be seen in the image below giving the impression there are three sets of feelers.  As with all decapods there are five sets of legs. There are three sets of walking legs and a set of legs with small pincers known as chelipeds which are used to clean clients and in front of these are a set of white legs used for feeding. 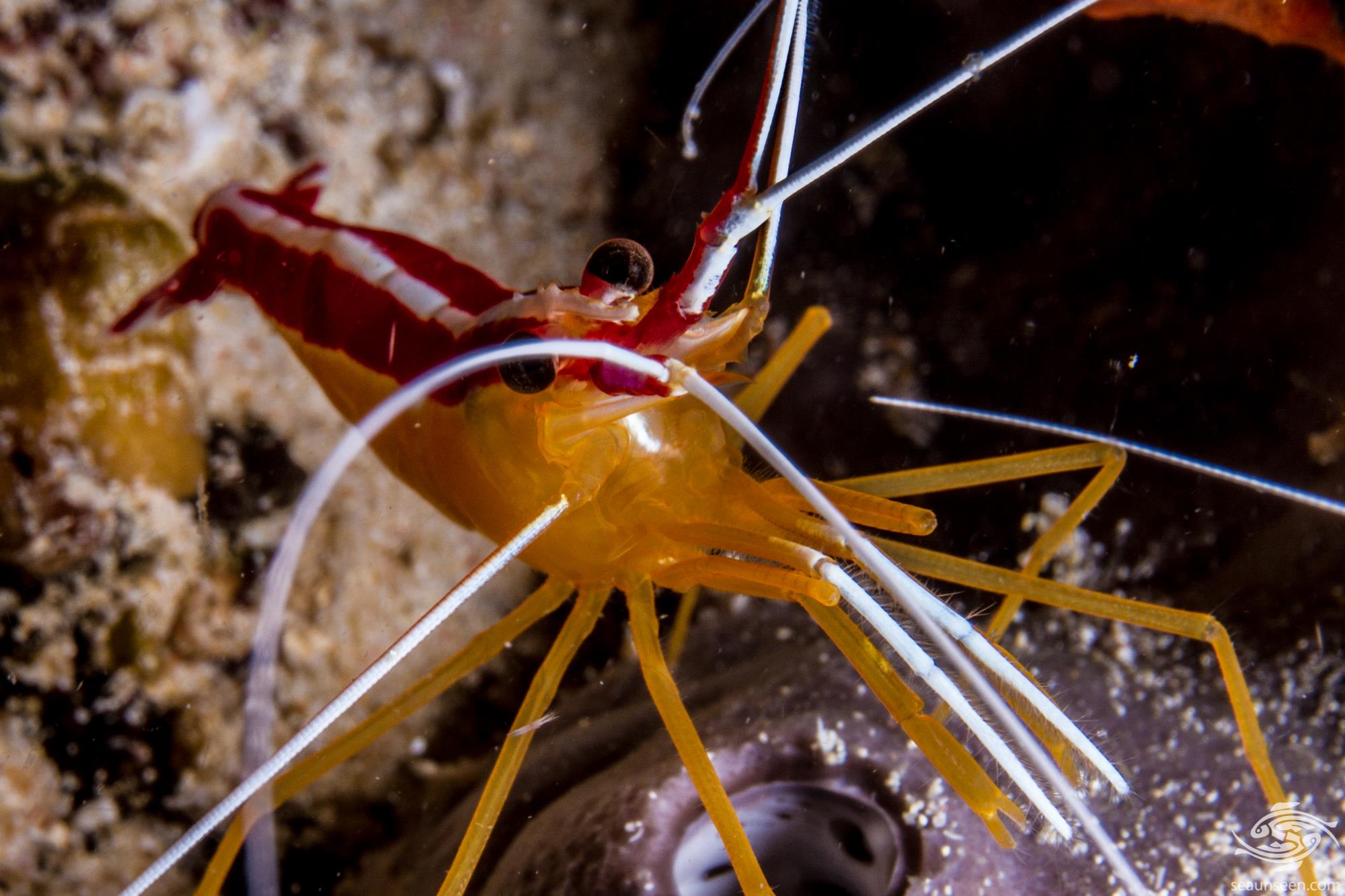 PACIFIC CLEANER SHRIMP IN THE WILD

Pacific Cleaner Shrimp are usually seen quite deep, usually around the 20 meter mark, it seldom that one sees them shallower in Tanzanian waters. They are usually in a large group at the entrance to a small cave. Members of the group tend to be in pairs or single and they keep their distance from each other.

While there may be twenty to thirty shrimp in the group they are usually 20 to 30 cm apart from each other. Occasionally one may see only a pair together but more often there is a group. There are often other species of shrimp with them and they are often seen in conjunction with the Durban Dancing Shrimp (Rhynchocinetes durbanensis) with whom they seem to cohabit quite peacefully.

Although they usually crawl on the bottom , when a potential client arrives they swim onto the client using their swimmerets on the underside of the tail. These short swims are accomplished surprisingly quickly. When one approaches them they will usually sway their body and wave their feelers. If one is brave enough to take ones regulator out of ones mouth and hold it open, they will come and clean your mouth for you as can be seen in the video at the bottom of the post. 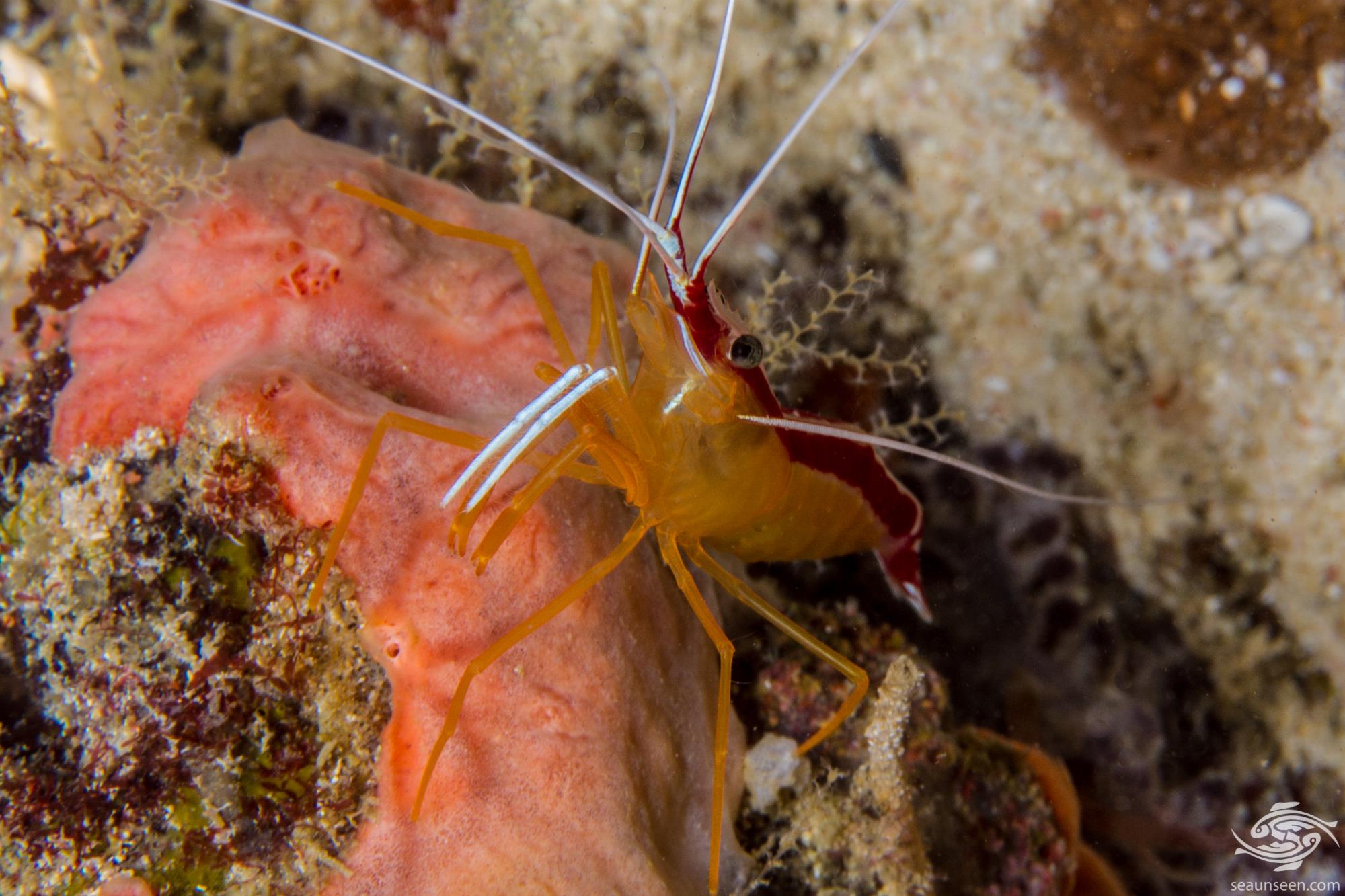 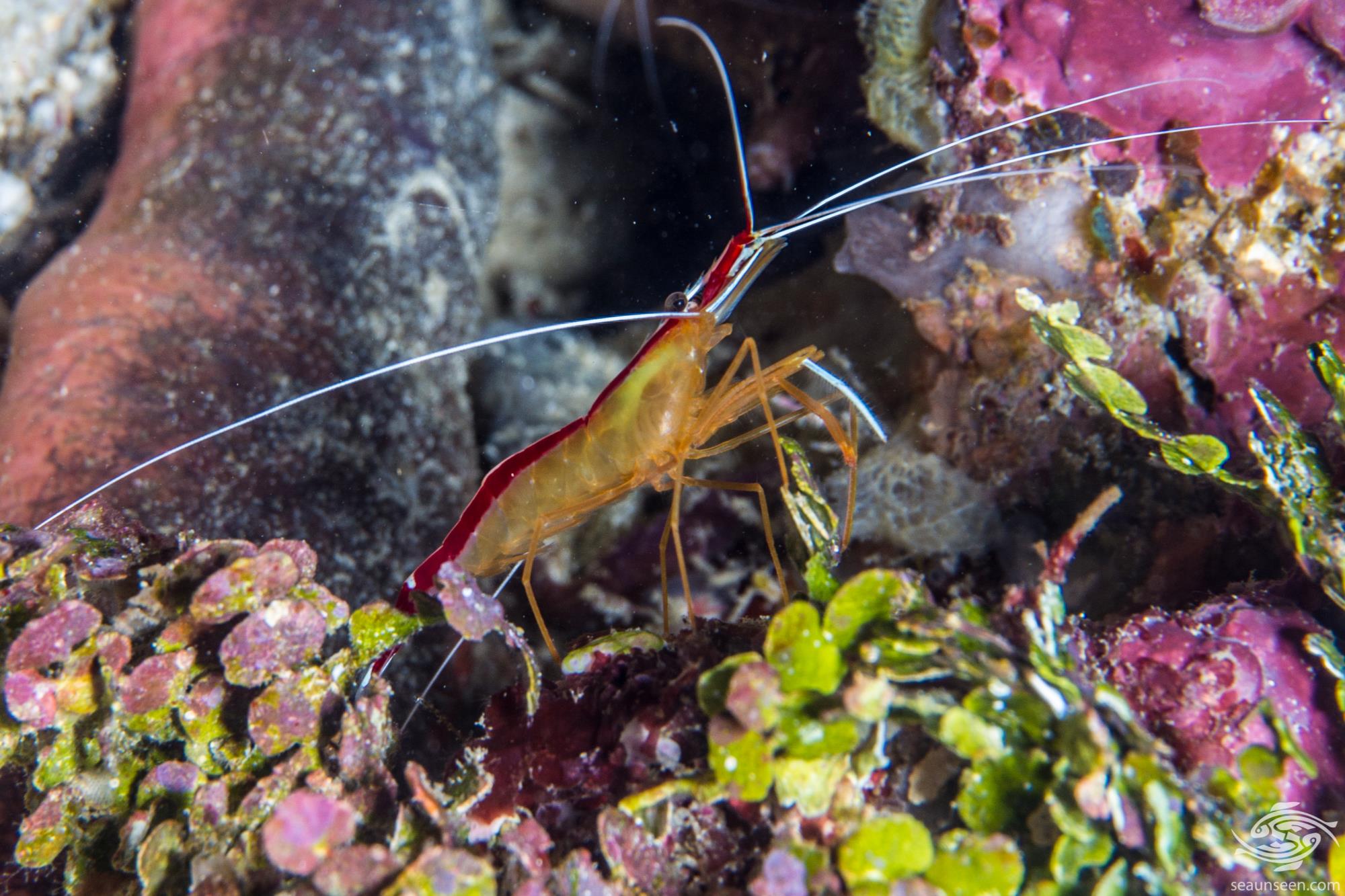 The Pacific Cleaner Shrimp feed on parasites and dead skin on client fish as well as detritus. Because they readily take to meat diets in aquariums one presumes they would scavenge in the wild. 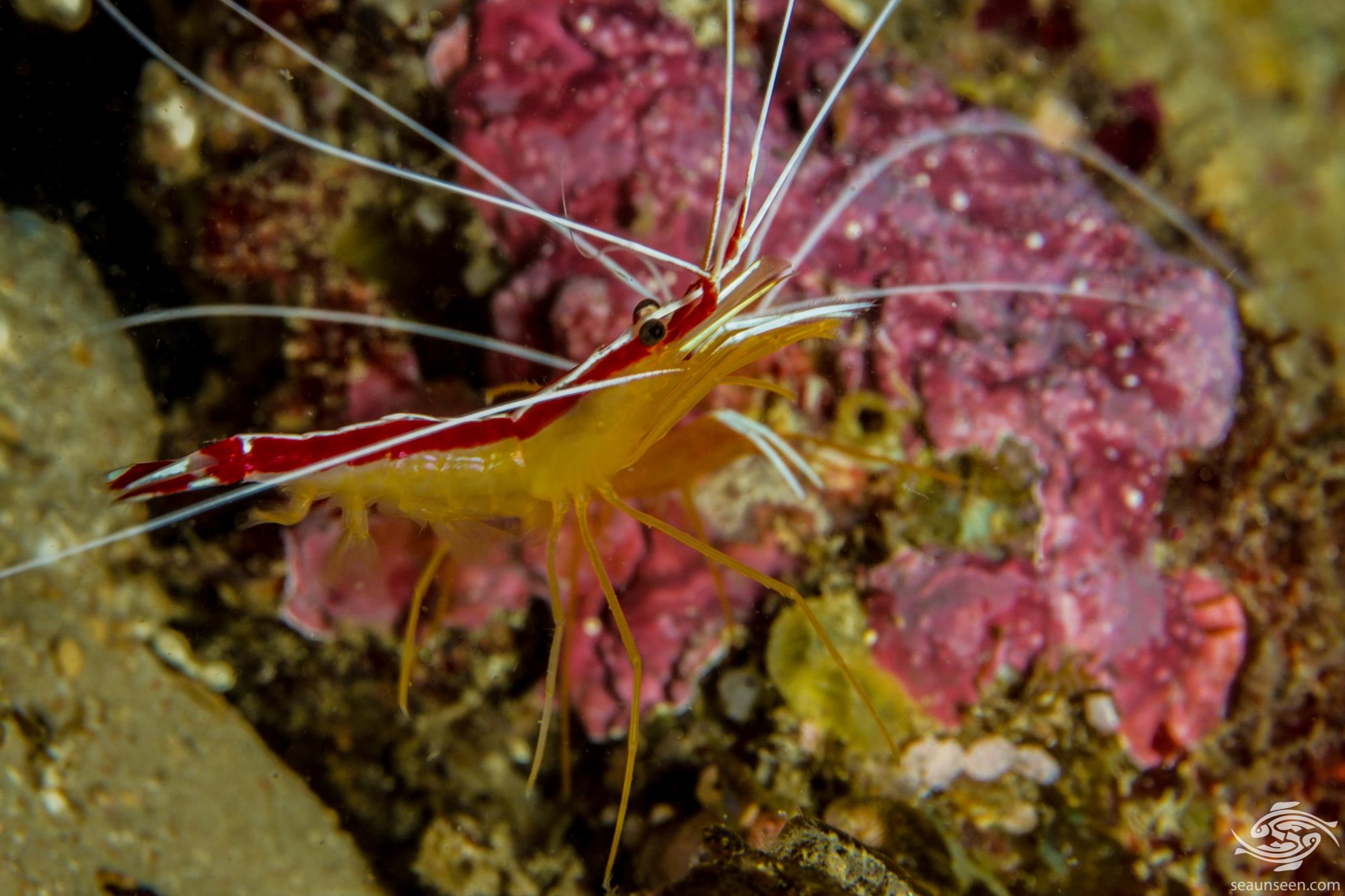 The Pacific Cleaner Shrimp are simultaneous hermaphrodites and each individual is capable of carrying eggs. There seems to be some argument over whether they are capable of storing sperm but the predominance of evidence seems to indicate that they cannot.  From reading all the conflicting articles, it seems that fertilization can only take place after a molt.

Once they mate the eggs are extruded onto the spinnerets. When the eggs hatch there are several larval stages that the larvae go through. There seem to be at least ten of these stages before the preadult stage and the development into an adult takes at least three months but possibly slightly longer. It takes them approximately 6 months to grow to 4 cm. 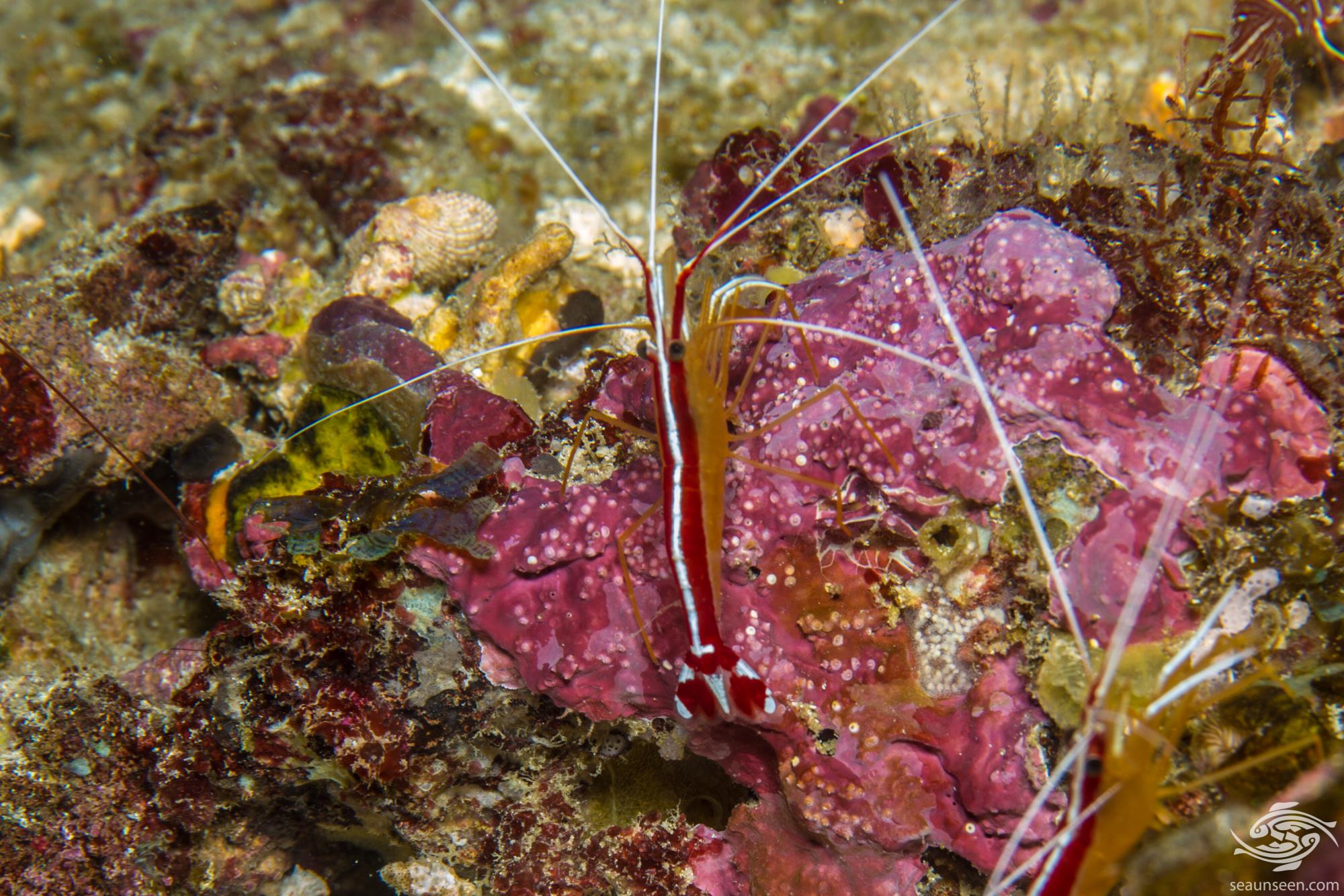 Pacific Cleaner Shrimp are collected for Marine aquariums and in some areas this collecting has substantially reduced the population. They have been captive bred but because of their lengthy larval stage of three months they are difficult to breed and even the best programs have only an 11 % success rate. 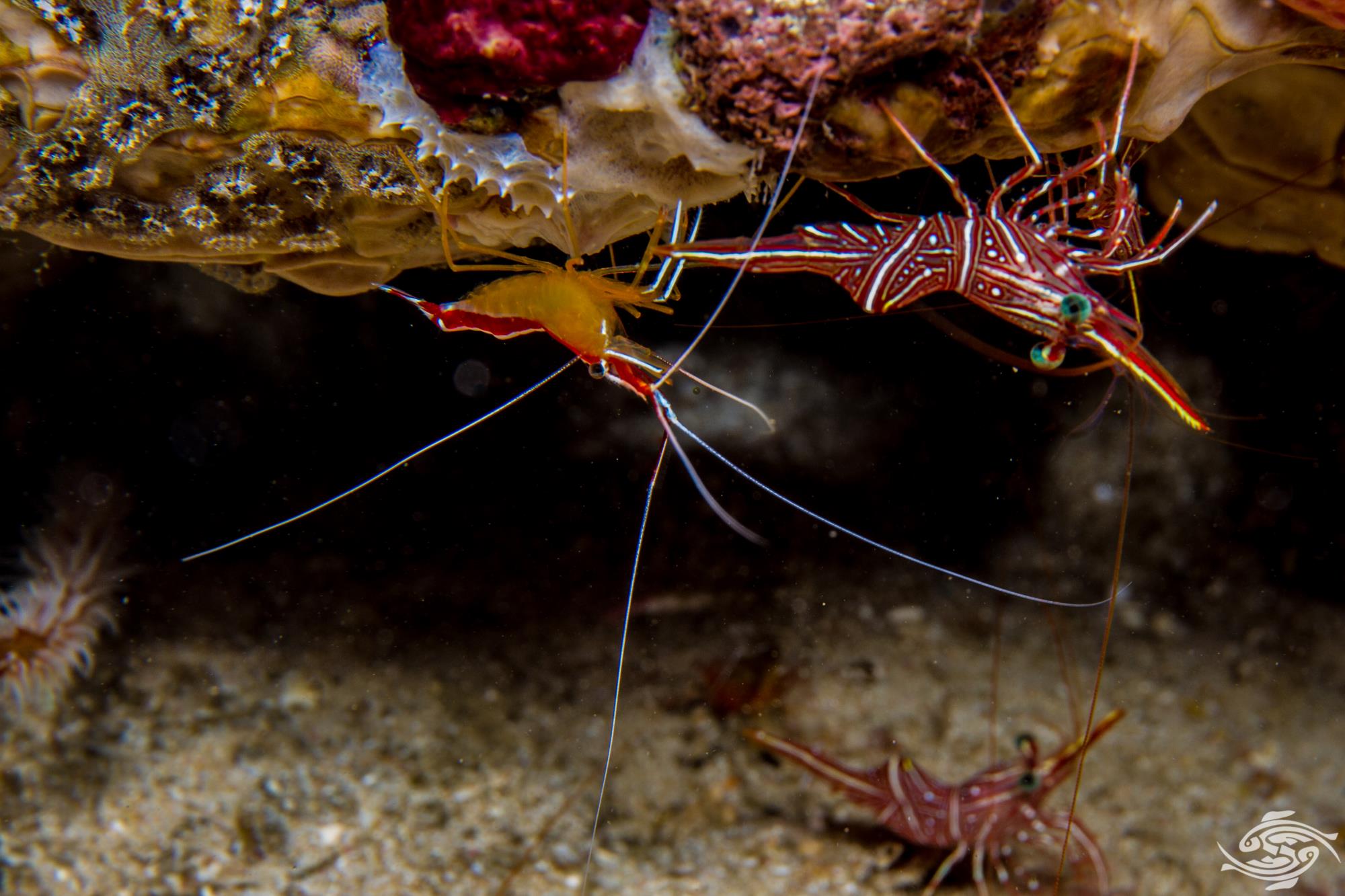 Because of their beneficial habits of cleaning fish and the tank Pacific Cleaner Shrimp are sought after by aquarists. In the confined space of a tank it is supposedly not possible to keep more than one pair as they will attack and kill each other. Possibly this relates to competition for a limited amount of food. In the wild we have observed them in groups of between twenty and thirty in fairly small caves. We have never seen any aggression between the shrimp in these caves but they keep their distance from each other.

They are reef safe and undoubtedly have a beneficial effect on a tank. It is possible they may pick on anemones and try to steal their food but other than occasionally walking over corals, they will not pick on them. Because they easily take to a standard meaty diet in tanks this makes them easy to care for.