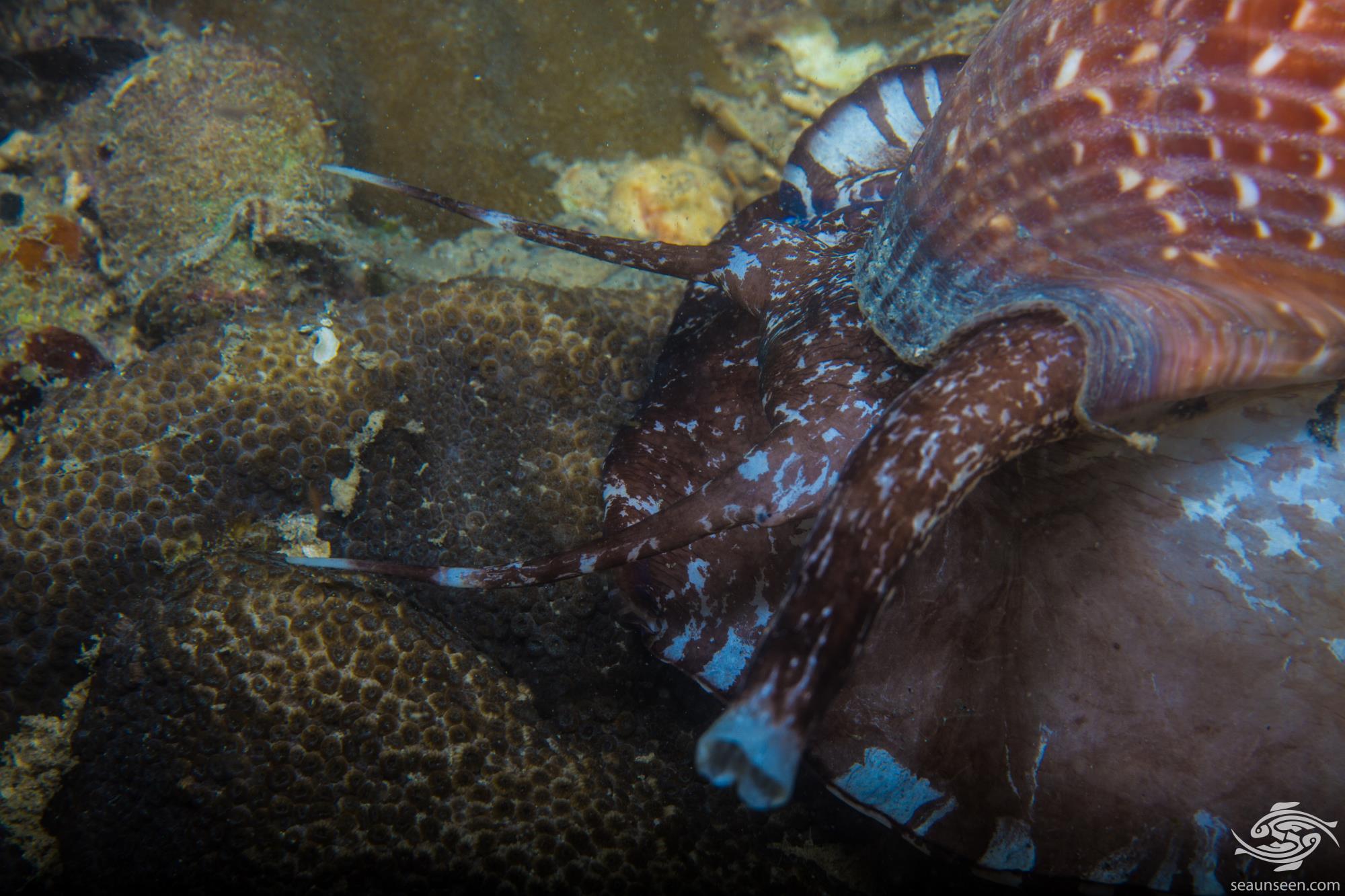 The Partridge Tun shell (Tonna perdix) is a large fairly reclusive mollusk rarely encountered on shallow night dives in Tanzanian waters. They are marine snails in the super family Tonnoidea. They are unusual in that the foot does not fit into the shell and for the size of the mollusk, the shell is small. 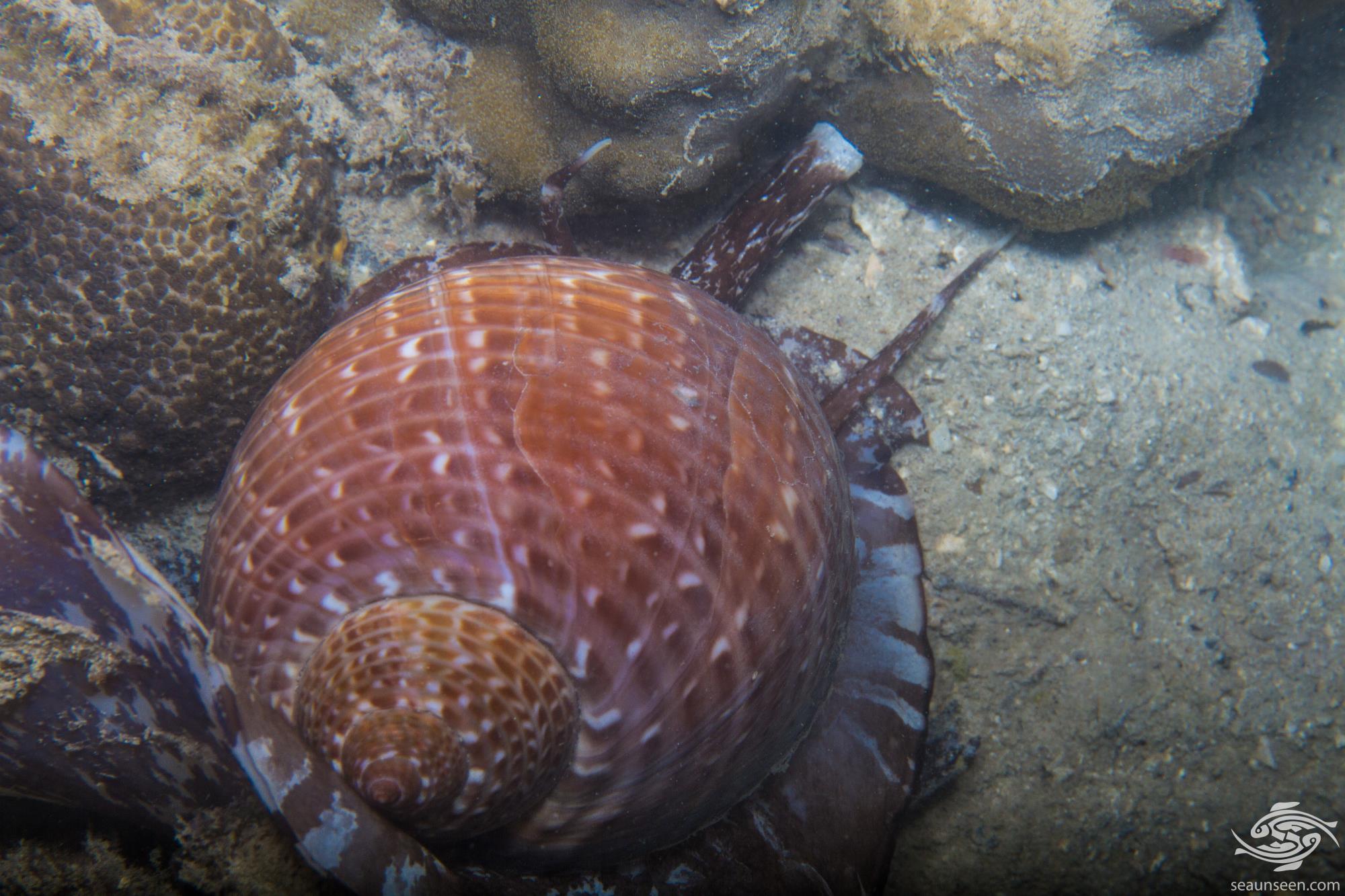 The shell which grows up to 22 cm is rounded and is a red brown color with white speckles on it. The colors resemble that of a Partridge, giving them their common name. The mantle and foot are a darkish brown color mottled with white.  They have small blue eyes which can be seen below and a fairly large siphon on the left of the body. The proboscis used for feeding is on the right of the body. 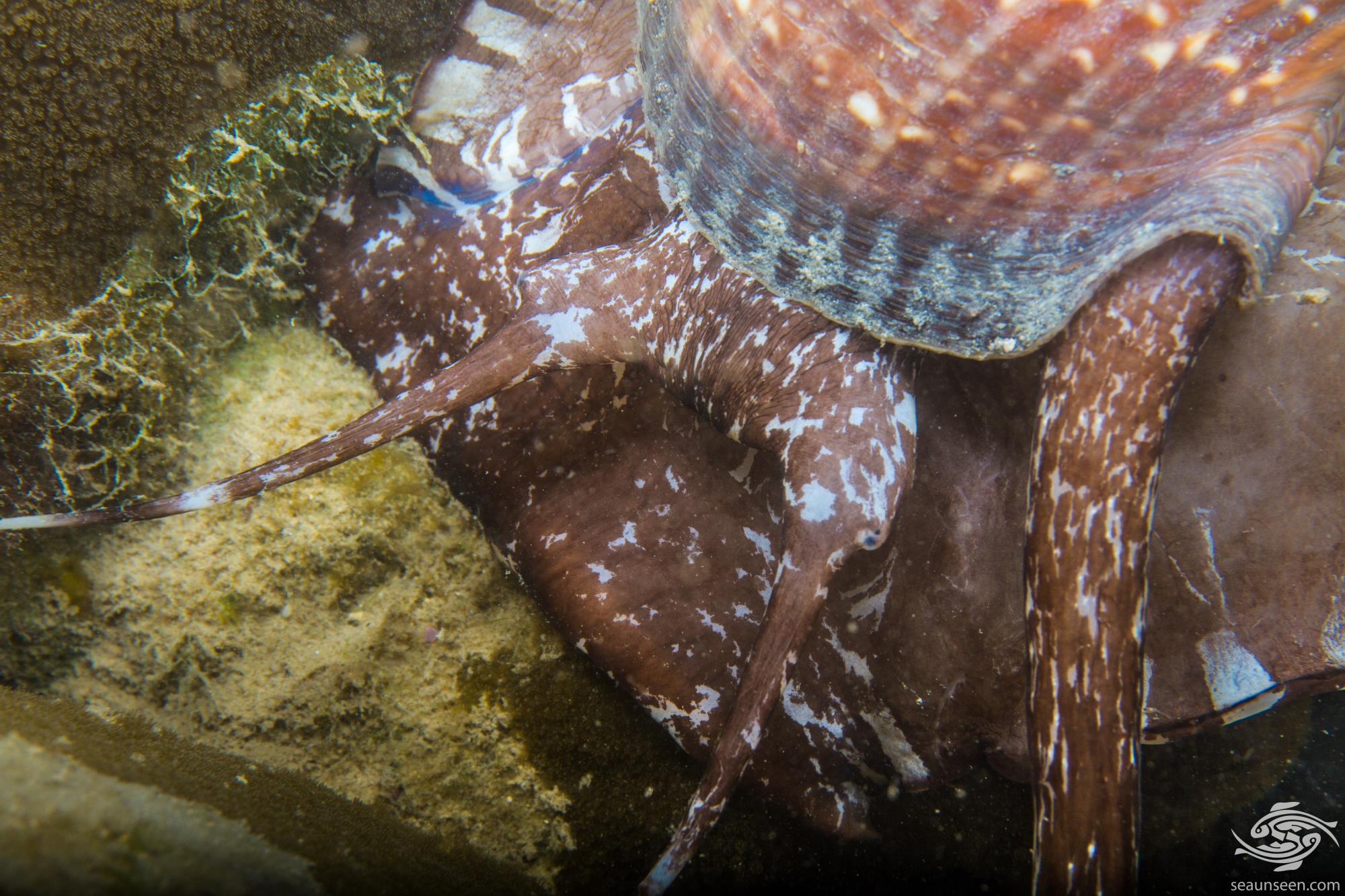 PARTRIDGE TUN SHELL IN THE WILD

Partridge Tun shells are nocturnal hunters and bury themselves in the sand during the day. They are fast moving for mollusks and in laboratory conditions were recorded at crawling at 43cm per minute.  From personal observation while diving at night these speeds appear realistic in the wild.

Once one puts a dive light on a specimen they clearly become uncomfortable and head off in the opposite direction. It is possible that under such stress they could exceed the speeds recorded in the laboratory.  For a mollusk they are very fast. 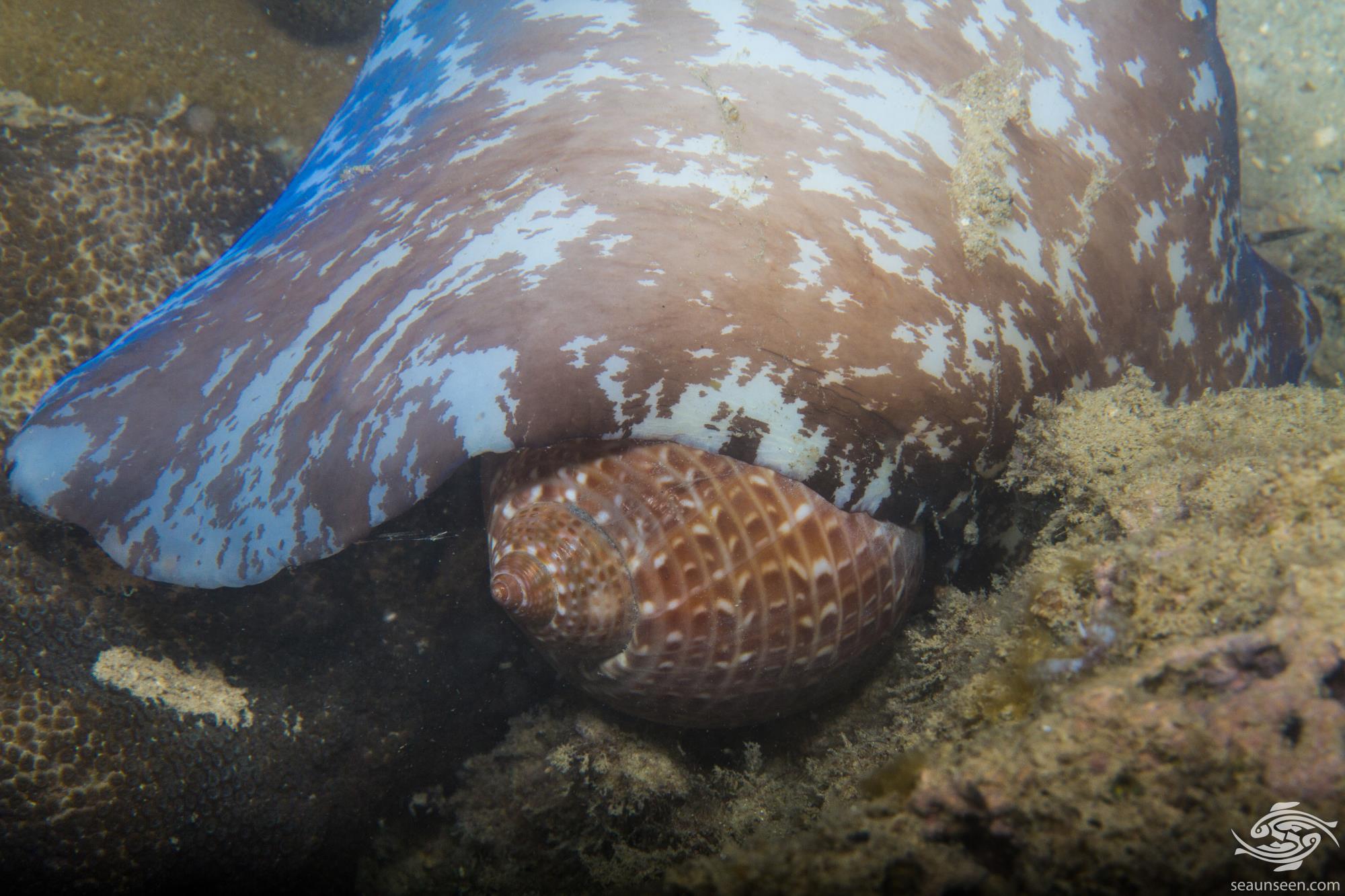 The Partridge Tun shell is found across the Indo-Pacific region, from the east coast of Africa across to Hawaii in the east and southern Japan in the north. They are found in East Africa from depths of 1 meter to 5 meters. 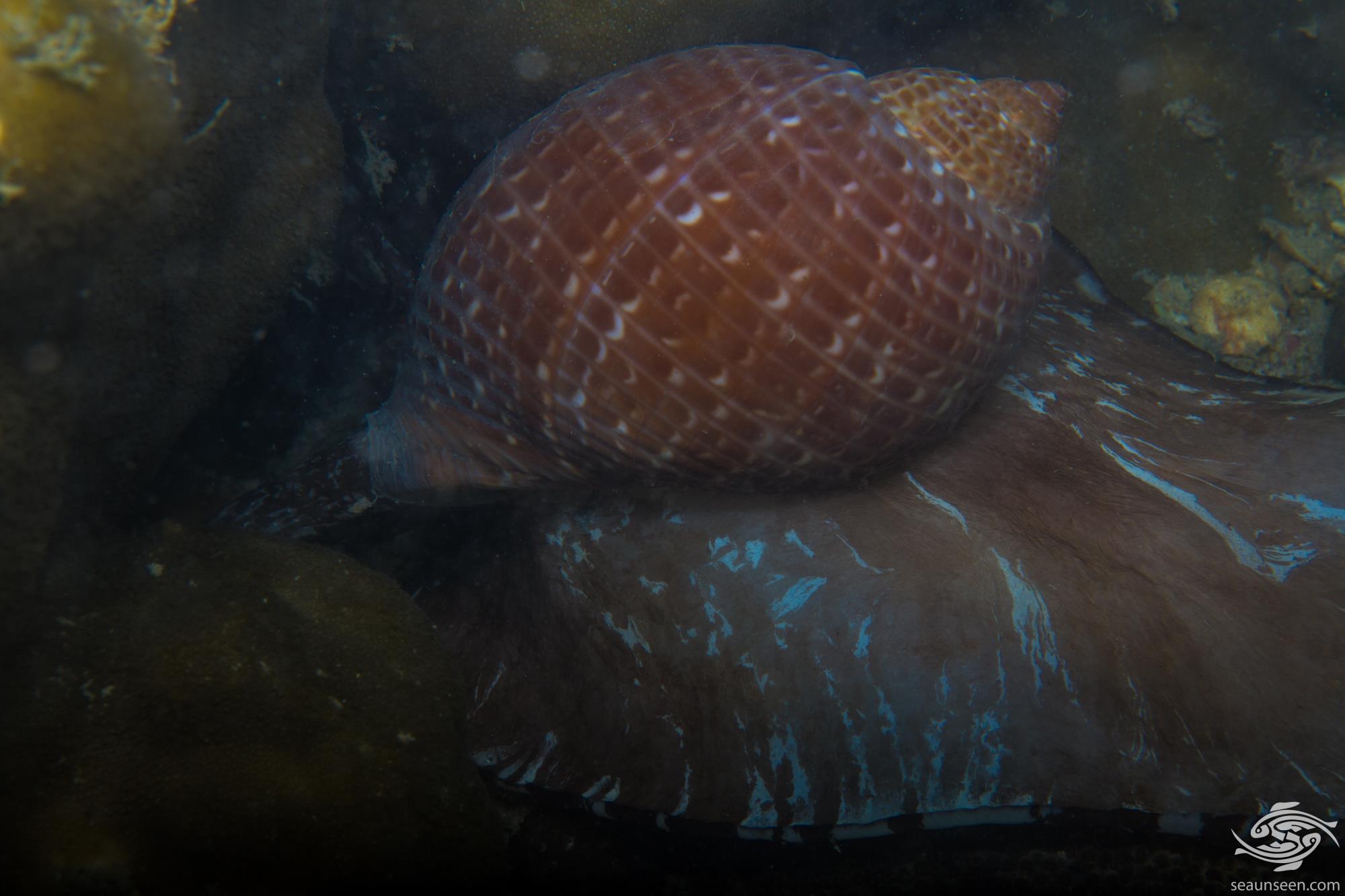 Partridge Tun Shells are predators which feed exclusively on sea cucumbers.  They seem immune to the poisons that most sea cucumbers have. Usually during the day they dig into the sand with just their siphon sticking out. At night when dug in , if they sense prey they emerge from the sand and locate an end of the sea cucumber. The prey is then enveloped using their proboscis. Secretions of saliva containing roughly 3 to 5 % sulphuric acid immobilize the prey which is then digested. Alternatively they actively hunt for prey while travelling up current and lift their siphon upward and wave it around to sample for the scent of prey. Once they detect prey they follow the scent until they find the prey. There are some interesting images at the bottom of this paper of a sea cucumber being consumed.

There seems to be no information published on their reproductive habits. However once the eggs hatch they enter a planktonic stage and the veliger as they are known seem to have a lengthy free swimming stage. 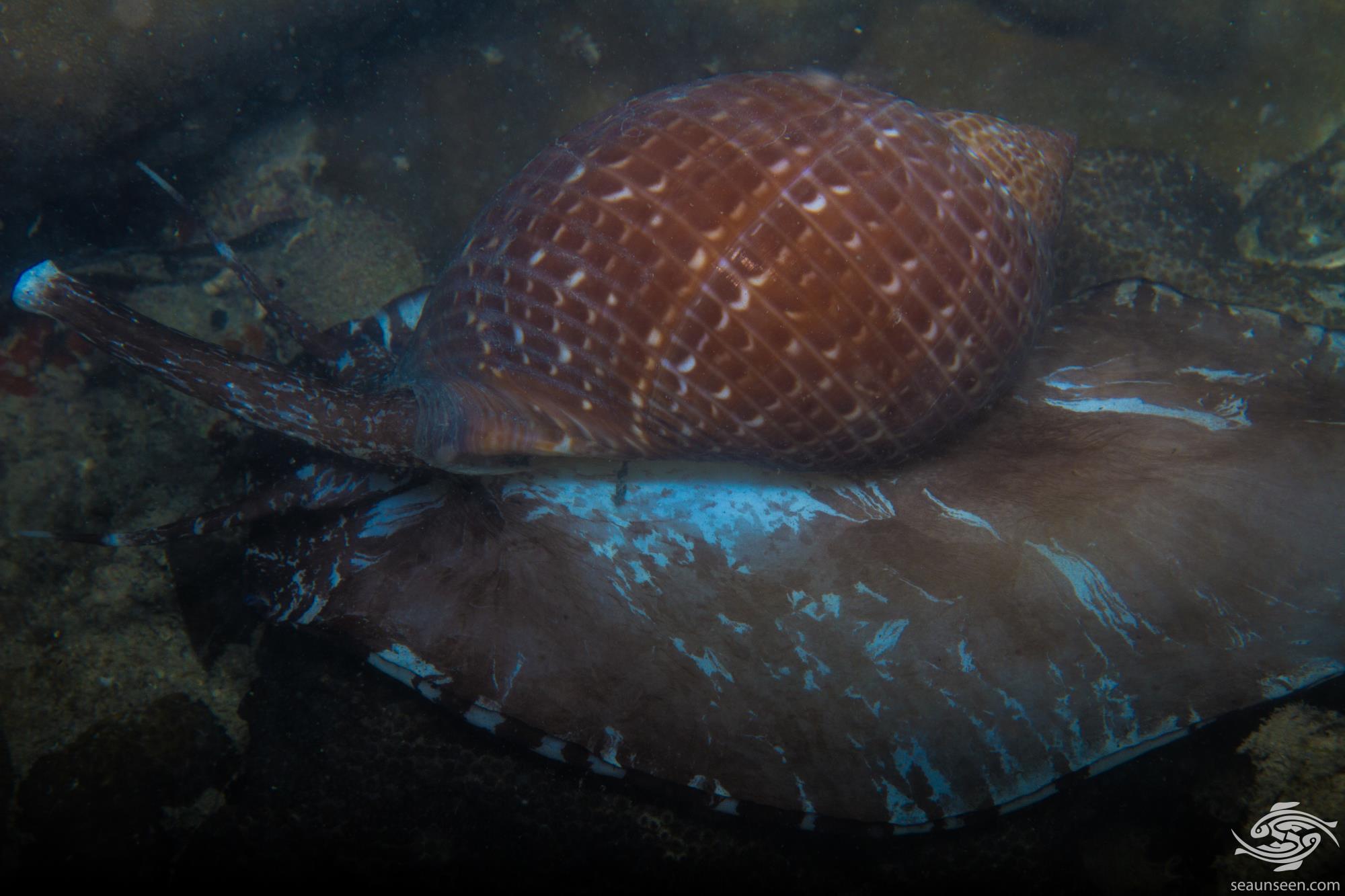 Once common throughout most of its range, it is now much less common due to shell collecting and destruction of its habitat through development and other activities such as dynamite fishing, especially in shallower areas.  The shells however are still popular amongst shell collectors. They are however far more beautiful alive. They are collected for food in some areas.