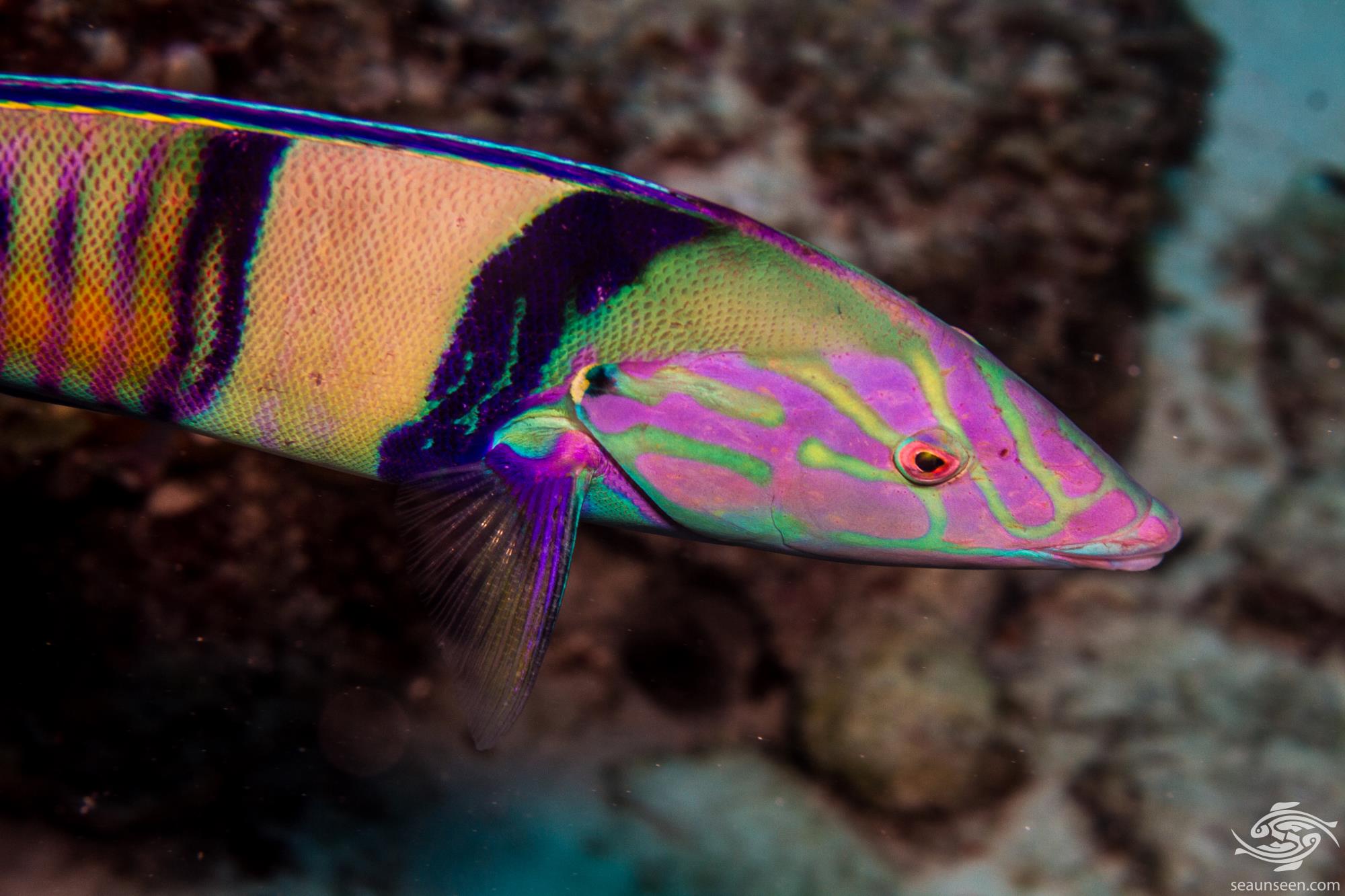 The Pastel Ring Wrasse (Hologymnosus doliatus) is also known as the Candy cane wrasse, Longface wrasse, Narrow-banded wrasse, Ringed rainbowfish and simply the Ringed wrasse. They are not a common wrasse on Tanzanian reefs but neither are they uncommon.

As with many wrasses the colouration changes dramatically as the fish ages from a juveniles into an adult.  At all stages of their development they are extremely attractive looking fish. The images below document the changes from a small juvenile below all the way through to a large adult male lower down in the post. 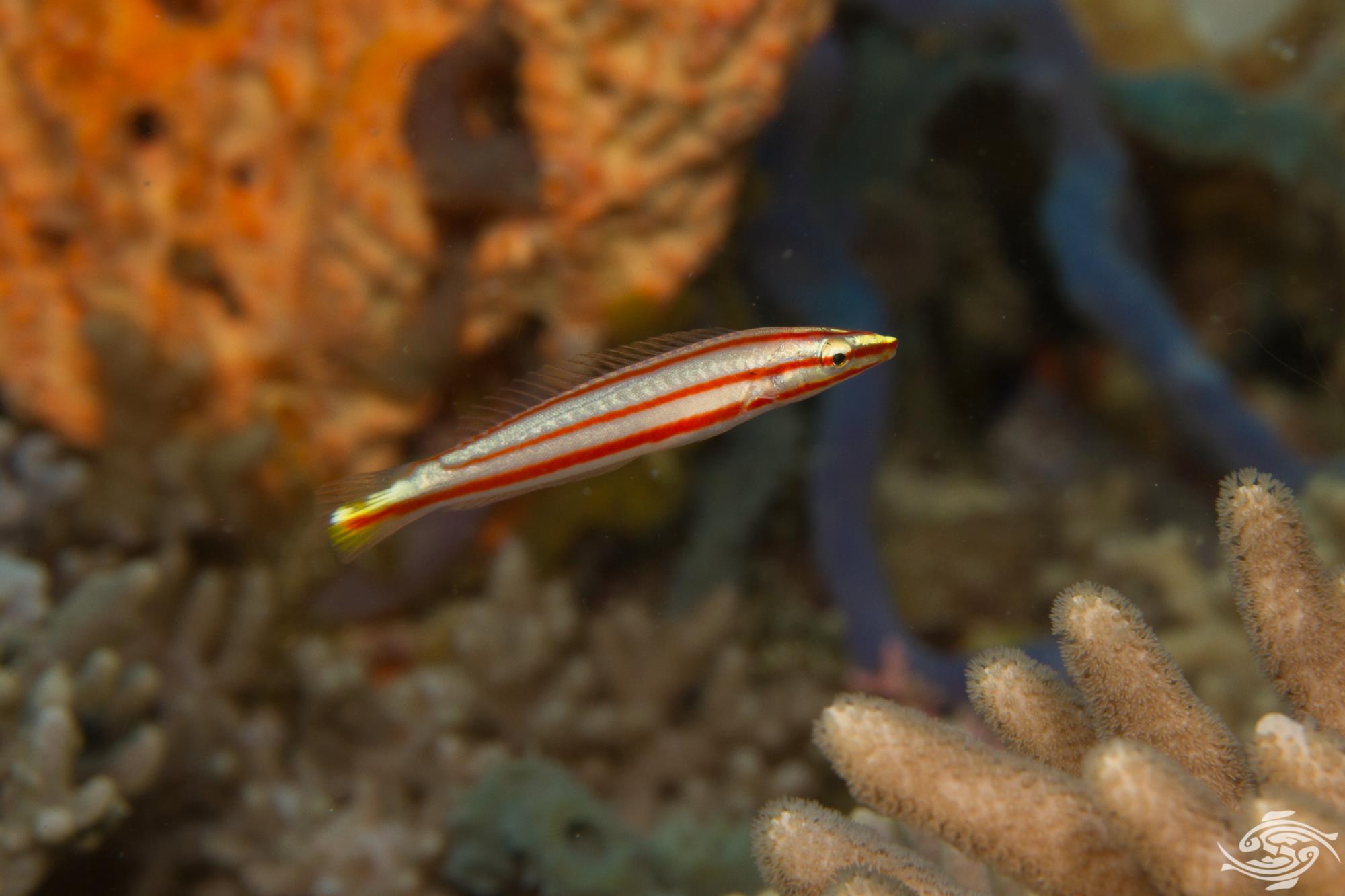 The  juveniles pictured above and below have an elongated silver white body with three red horizontal red stripes on each side, giving them at this stage of their life their common name of Candy Cane Wrasse. 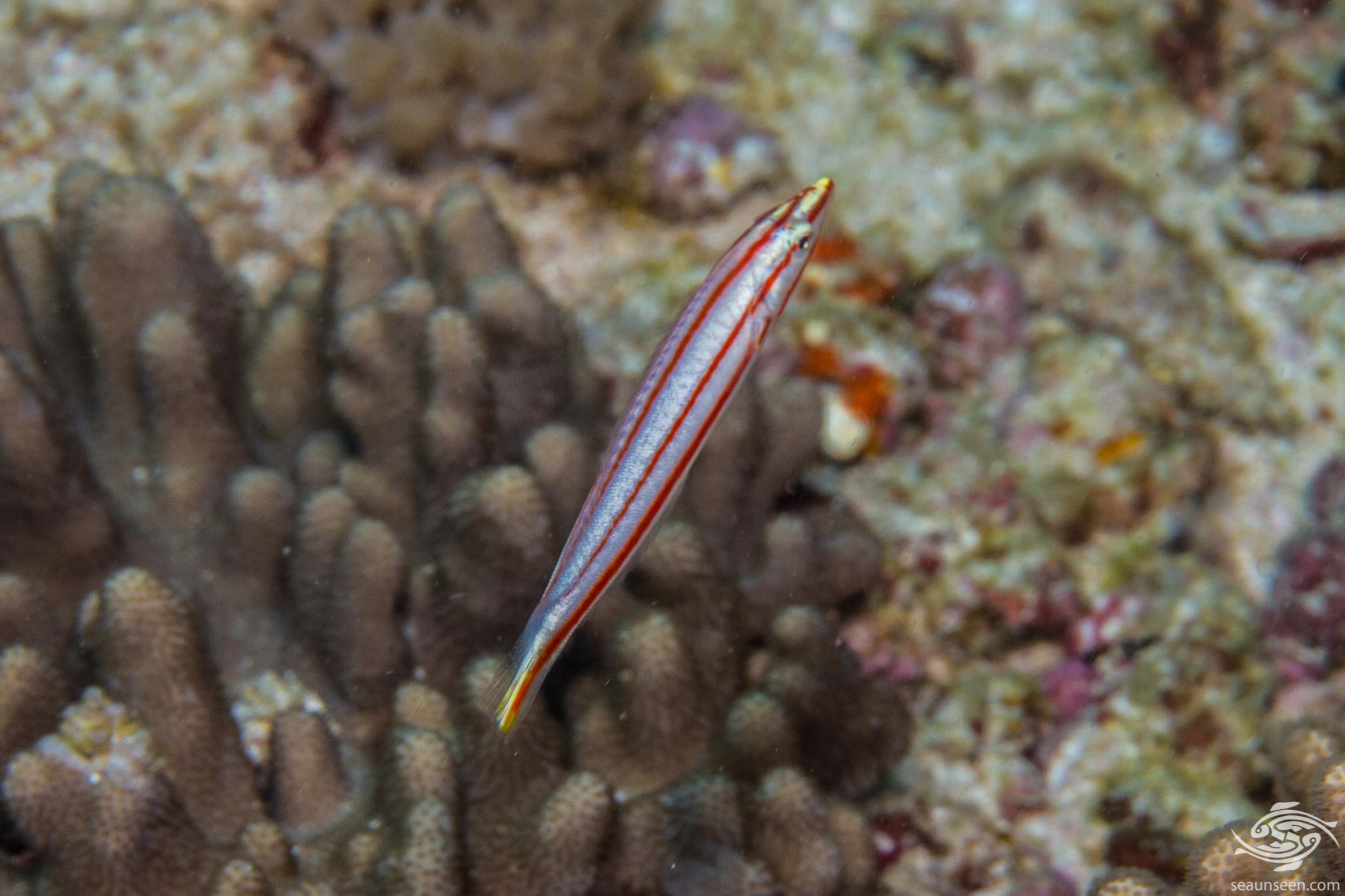 In the next stage light vertical lines begin developing on the body and where these intersect with the horizontal lines, small dots appear. 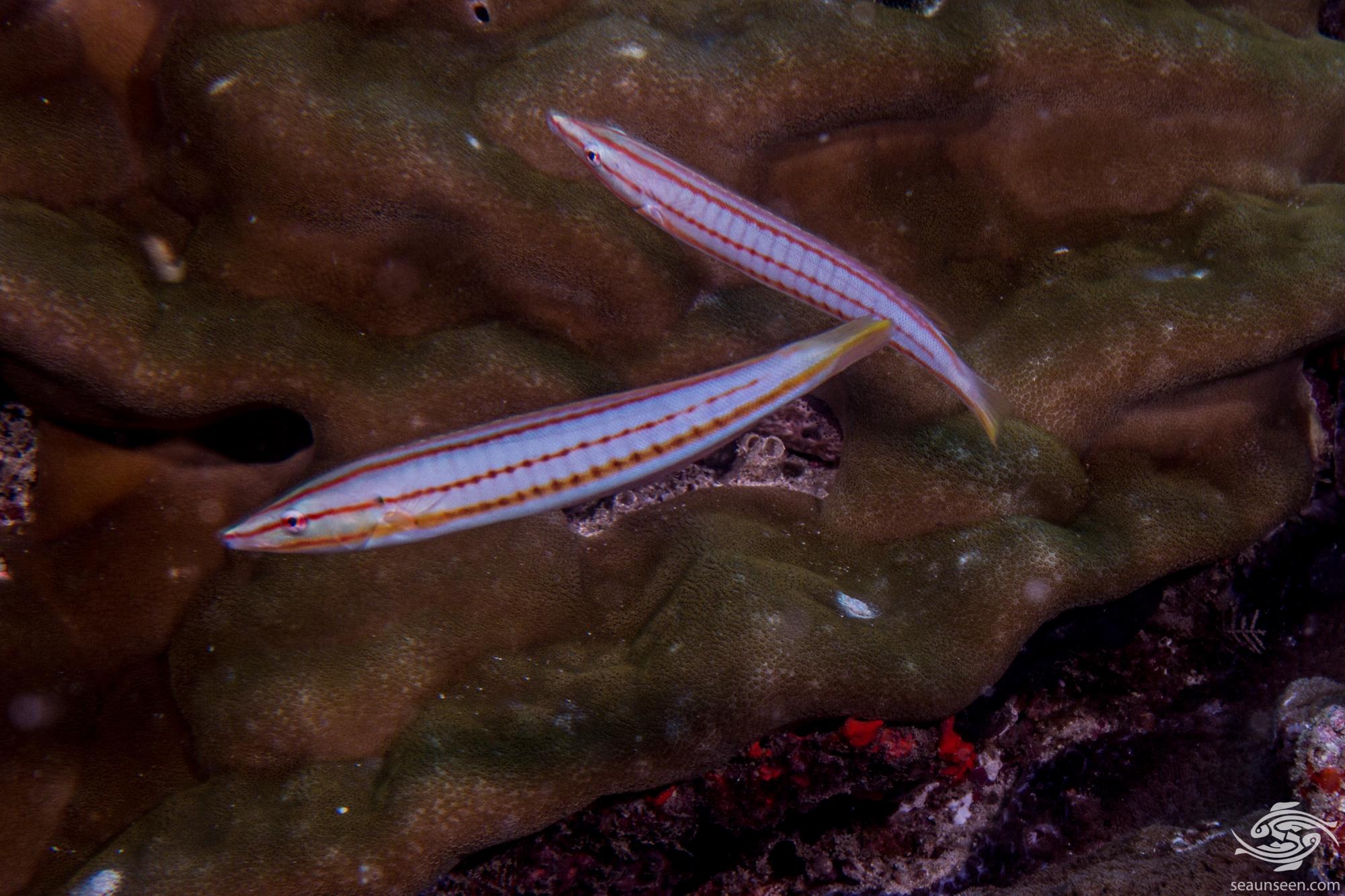 Next the body starts turning a light blue colour and the lower horizontal line goes yellow. 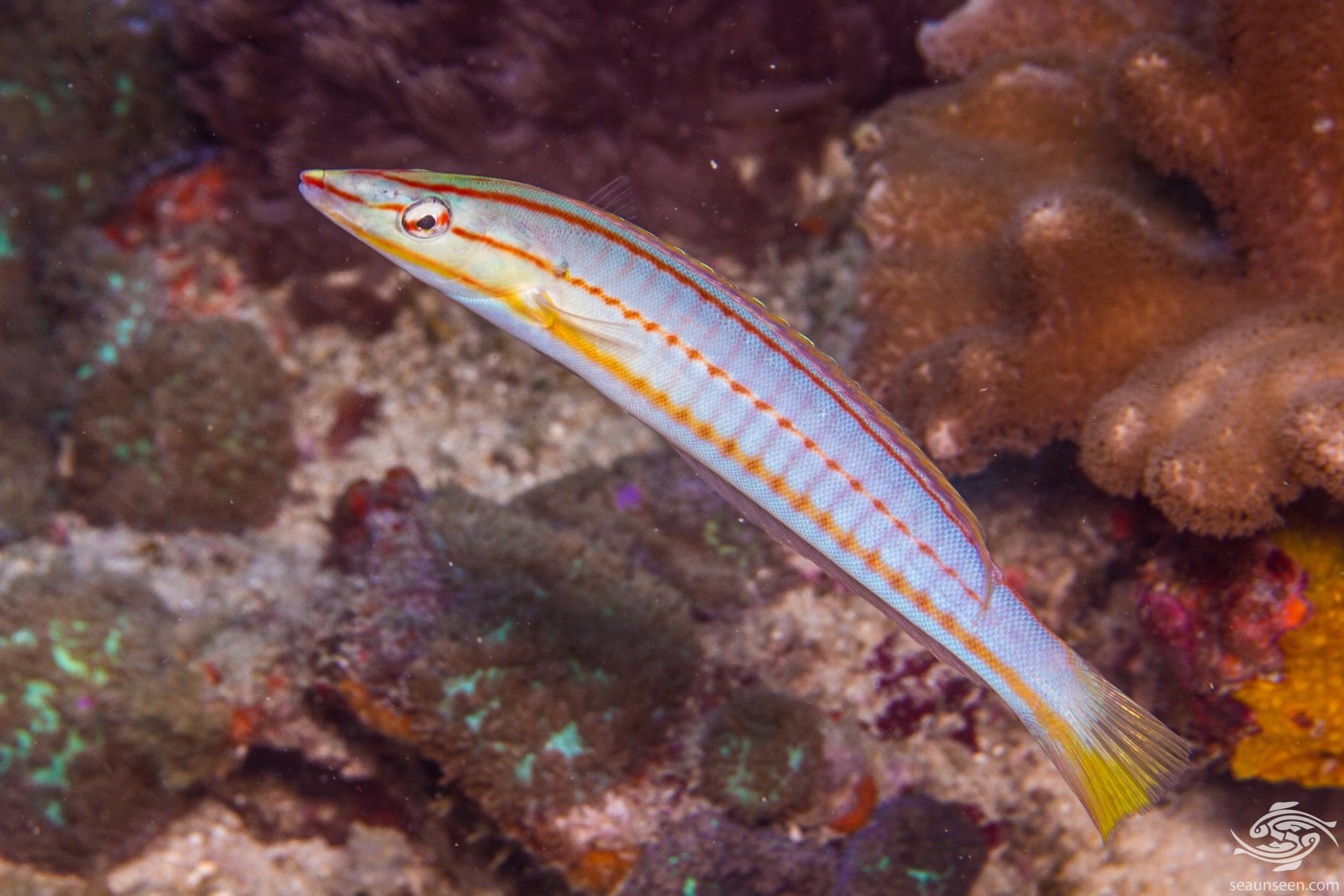 The body then goes a darker blue-green with  yellow and green appearing in the facial area. The horizontal lines begin to fade away and the vertical lines become more prominent. 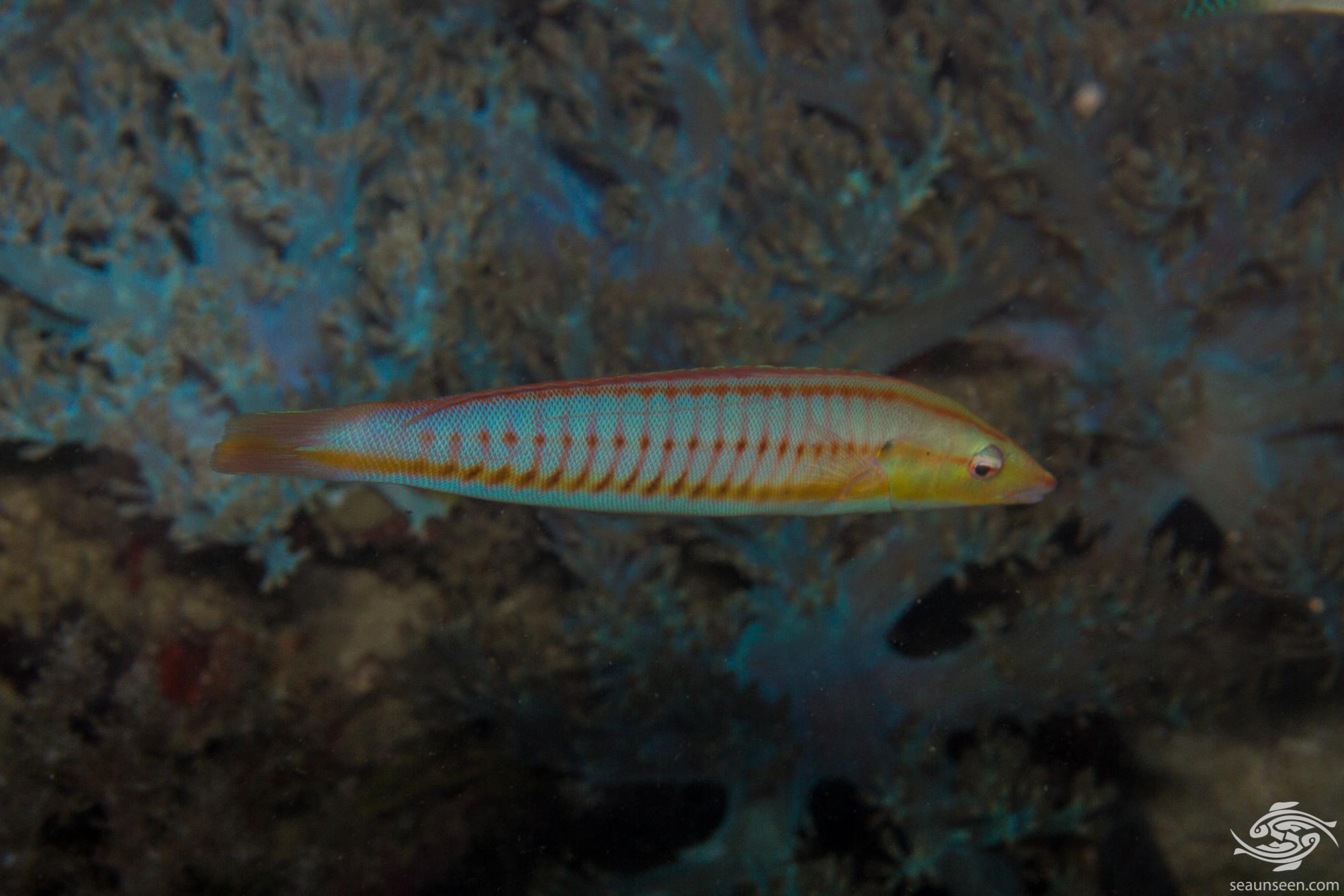 The facial area then goes a green colour with light red lines around the eye and red wavy vertical lines develop on the body. The horizontal lines have faded away completely. At this stage the fish is a mature female. 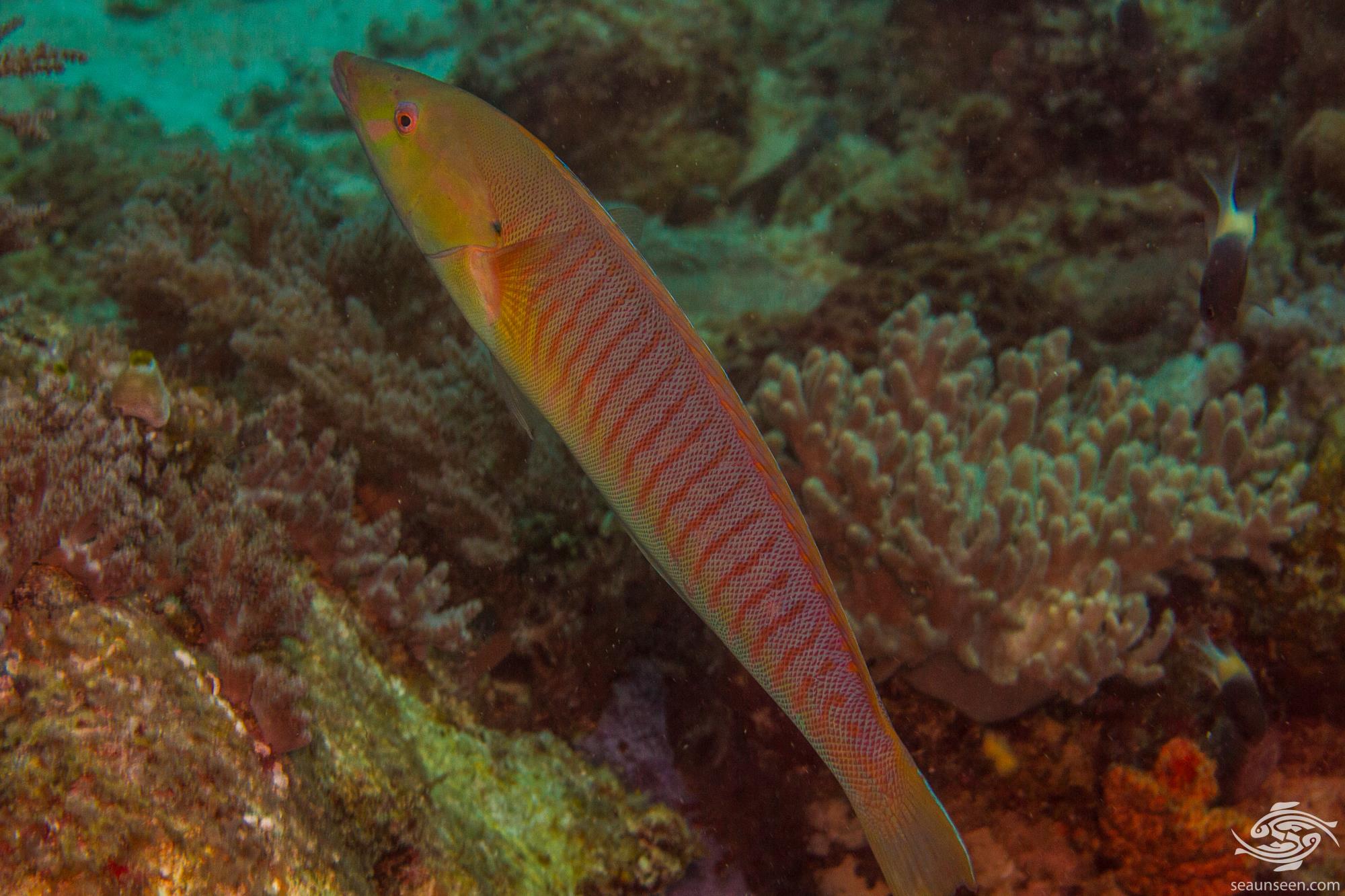 Dependent on social cues some of the larger females change into males as pictured below.  The face goes purple with green lines on it, The redish vertical bars on the body darken into a dark blue , the area in between becomes yellow-green and a large yellow patch ringed in dark blue lines develops behind the gill plates. Full grown males can reach 30 cm and the change from female to male usually occurs around 18 cm or so. 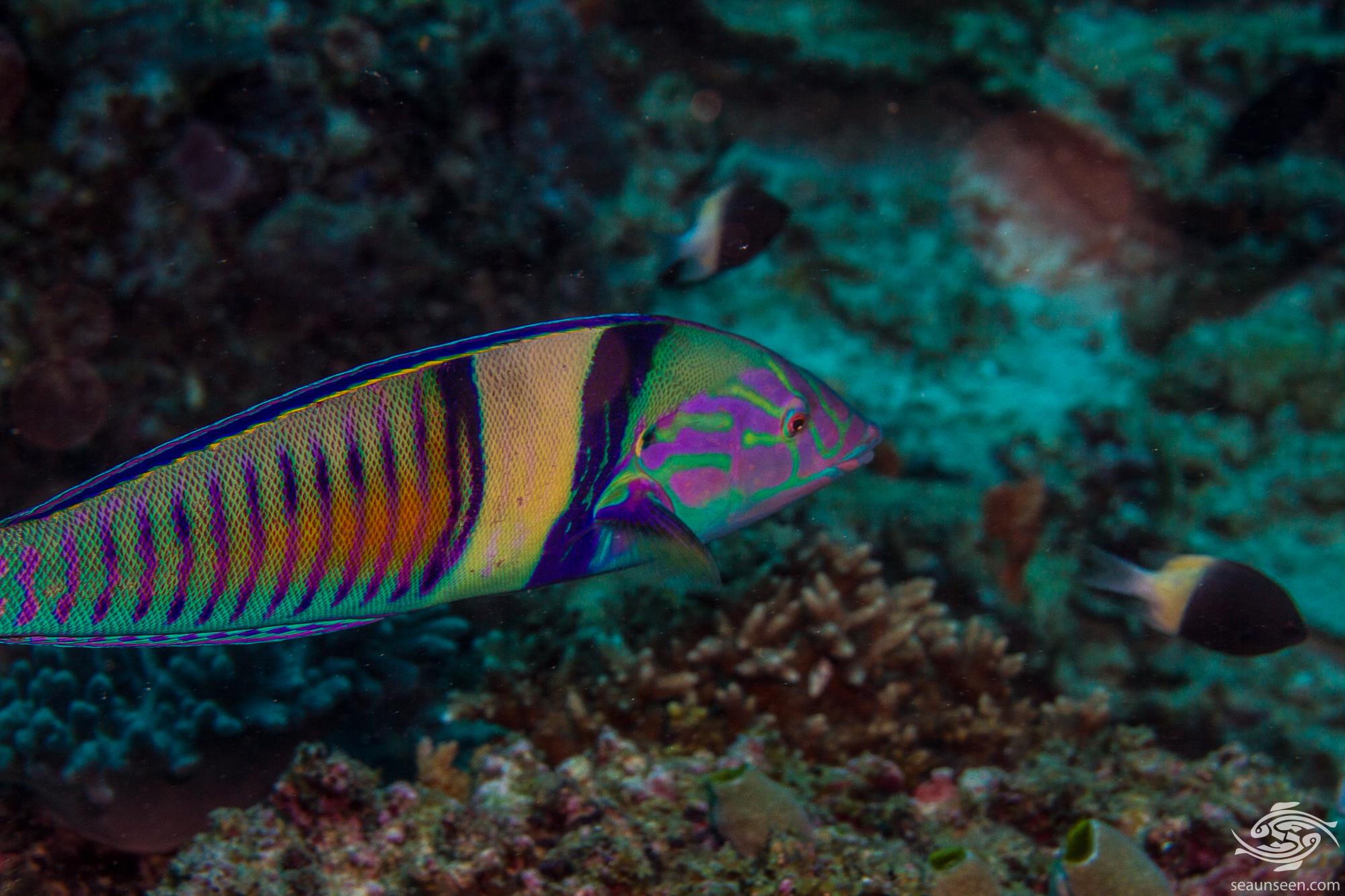 PASTEL RING WRASSE IN THE WILD

The Pastel Ring Wrasse is an extremely active fish at all stages of its life,  constantly swimming and feeding. They are fast swimmers, mainly found in sandy areas between coral rich areas on the reef. The juveniles are more secretive than the adults, usually being in small groups of two to five specimens that stick close to cover on the substrate. They are quick to dart into cover.

Once they mature into females they become solitary and are seldom seen together. Mature females are often seen feeding with juvenile parrotfish and goat fish. The males are not common and maintain harems that are quite spread out. They constantly patrol their territory. When they feel threatened they are quick to dive into the sand.

The Pastel Ring Wrasse  is found across the Western Indian Ocean from the Red Sea down to South Africa and across to Japan in the north, south to Australia and the Great Barrier Reef and east to the mid Pacific.  Their depth ranges from 4 to 35 meters but in Tanzania they are more common from 10 meters downwards. They mainly stick fairly close to the bottom and it is not often that they are seen swimming more than half a meter above the substrate. 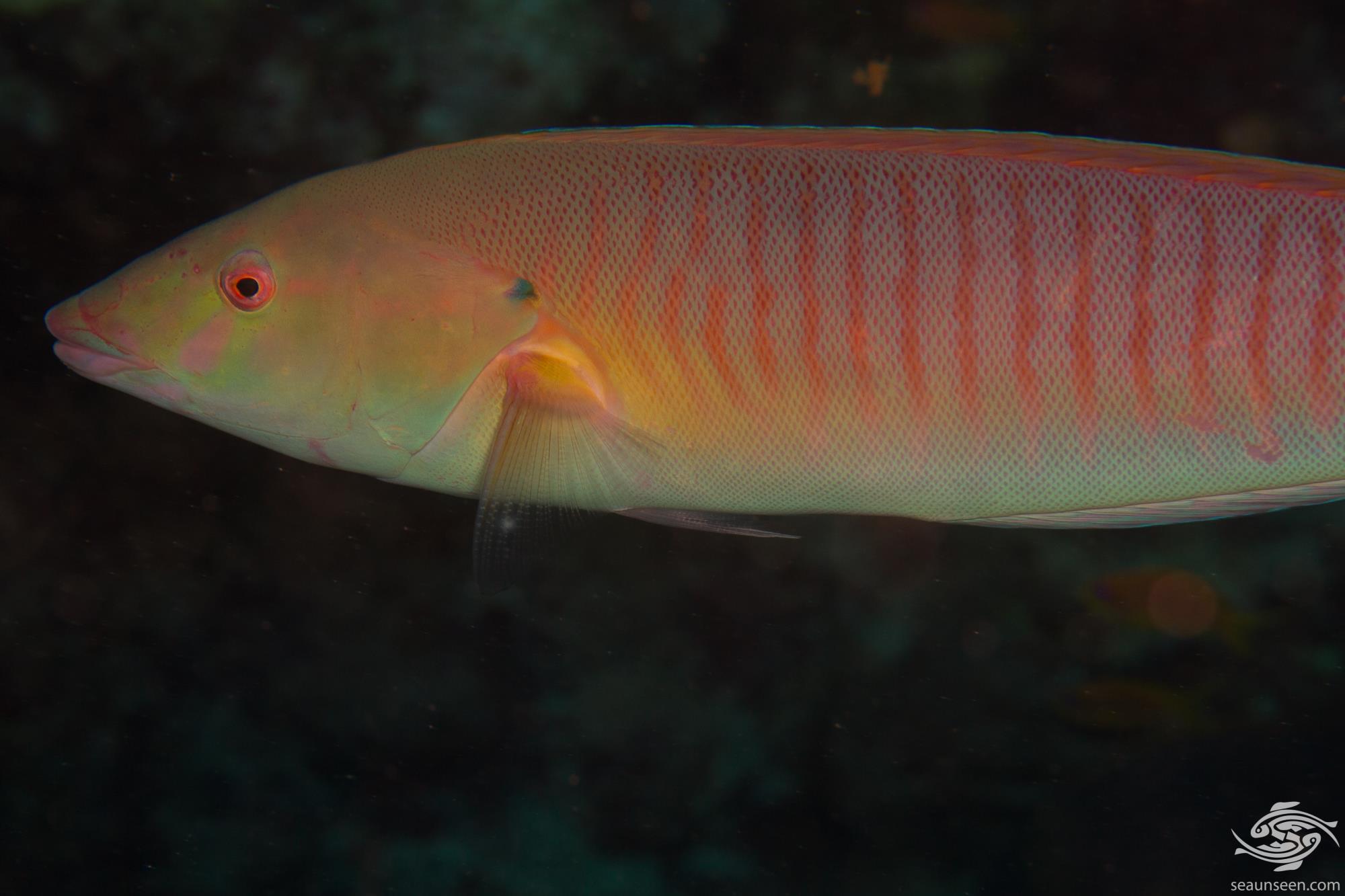 The Pastel Ring Wrasse feeds on small fishes, crustaceans and sometimes feeds on brittlestars and polychaete worms . They often use their speed to capture their prey, swimming at high speed across the reef and capturing their prey before it can hide. They are generally hard to photograph. The females often feed along with Goatfish and juvenile Parrotfish in Tanzanian waters. 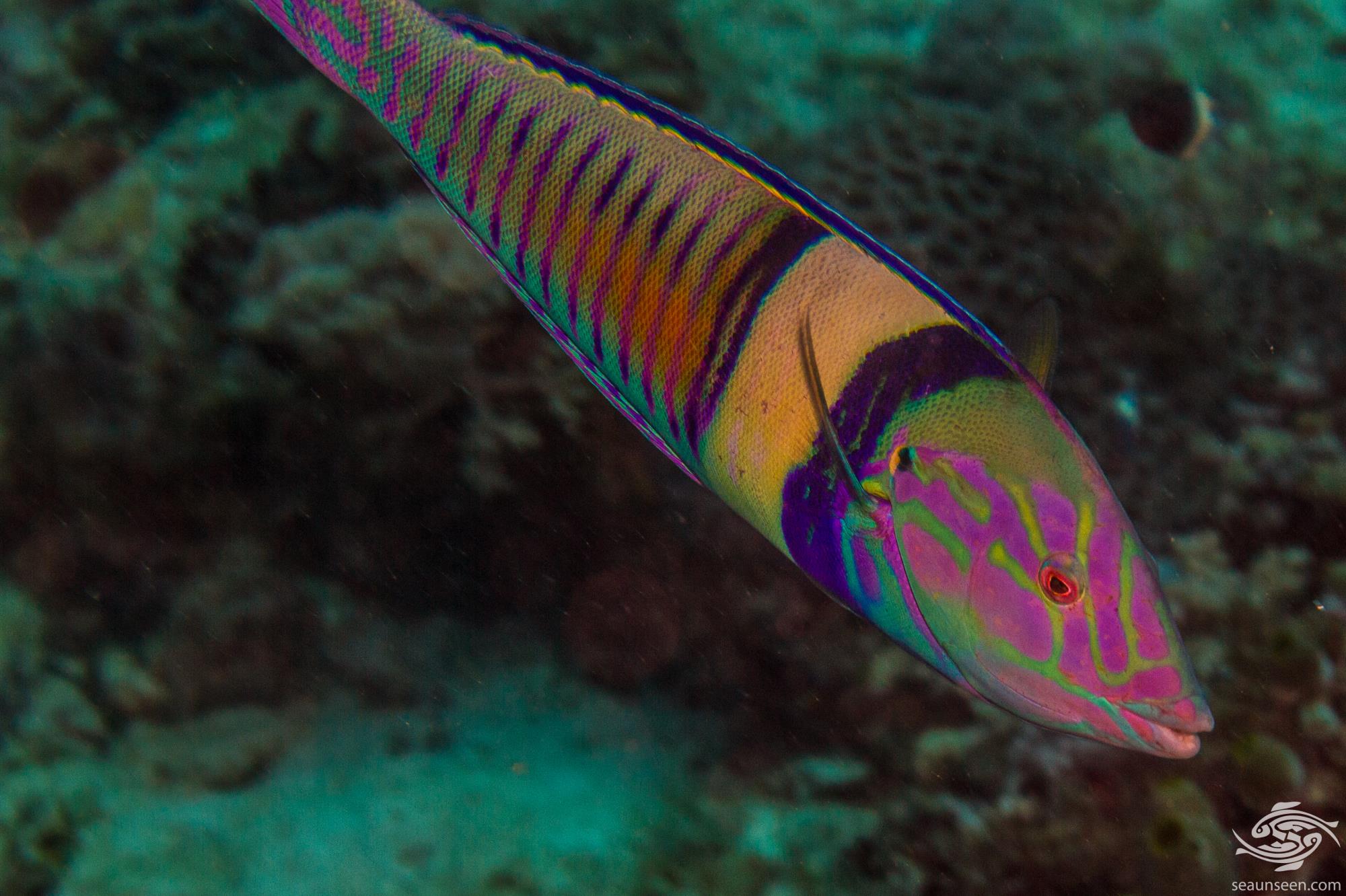 The Pastel Ring Wrasse is a Protogynous hermaphrodite. They first develop into females. As they age so some specimens based mainly on social cues transform into males. They are Oviparous, with the dominant male running a harem or possibly several harems of females. Little is known of their breeding habits but occasionally a  male will be seen pursuing a female. 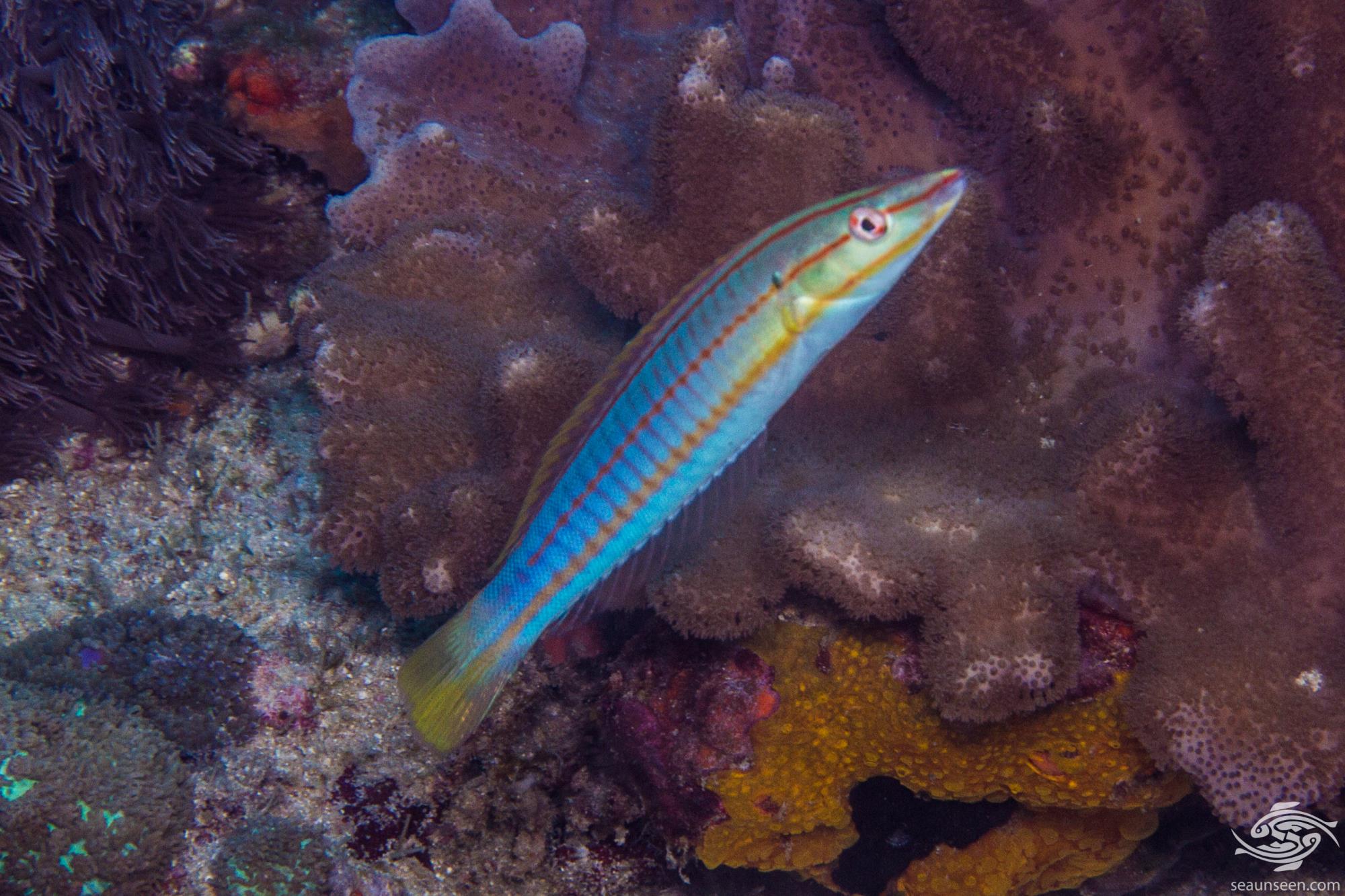 Pastel Ring Wrasse juveniles make an attractive addition to aquariums and are easy to keep and feed. However given the 30 cm size of an adult and the speed at which they can grow, one needs a very large tank for them to grow into. As they grow, so their appetite grows and smaller fish will fall prey to them.

Because they sleep in the sand at night, a thick layer of sand is necessary. They will almost certainly jump and a well secured cover is also a necessity. These fish are really only suitable for very large fish only aquariums. There is an interesting article here on why this is so.