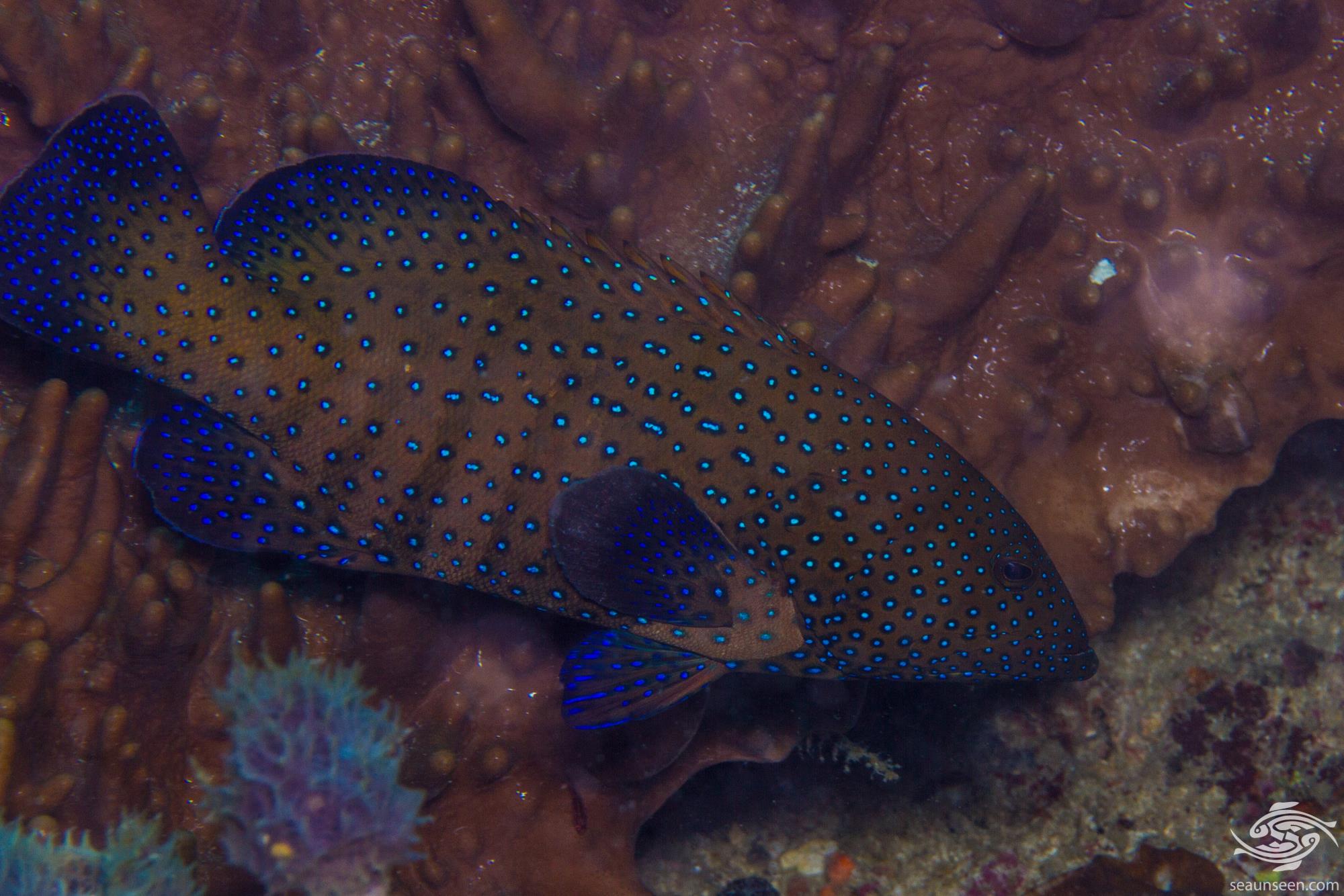 The Peacock grouper (Cephalopholis argus) is also known as the Peacock Hind, Peacock Rockcod, the Bluespotted Grouper and the Celestial Grouper. In Hawaii where it is an introduced species they are called the Roi. 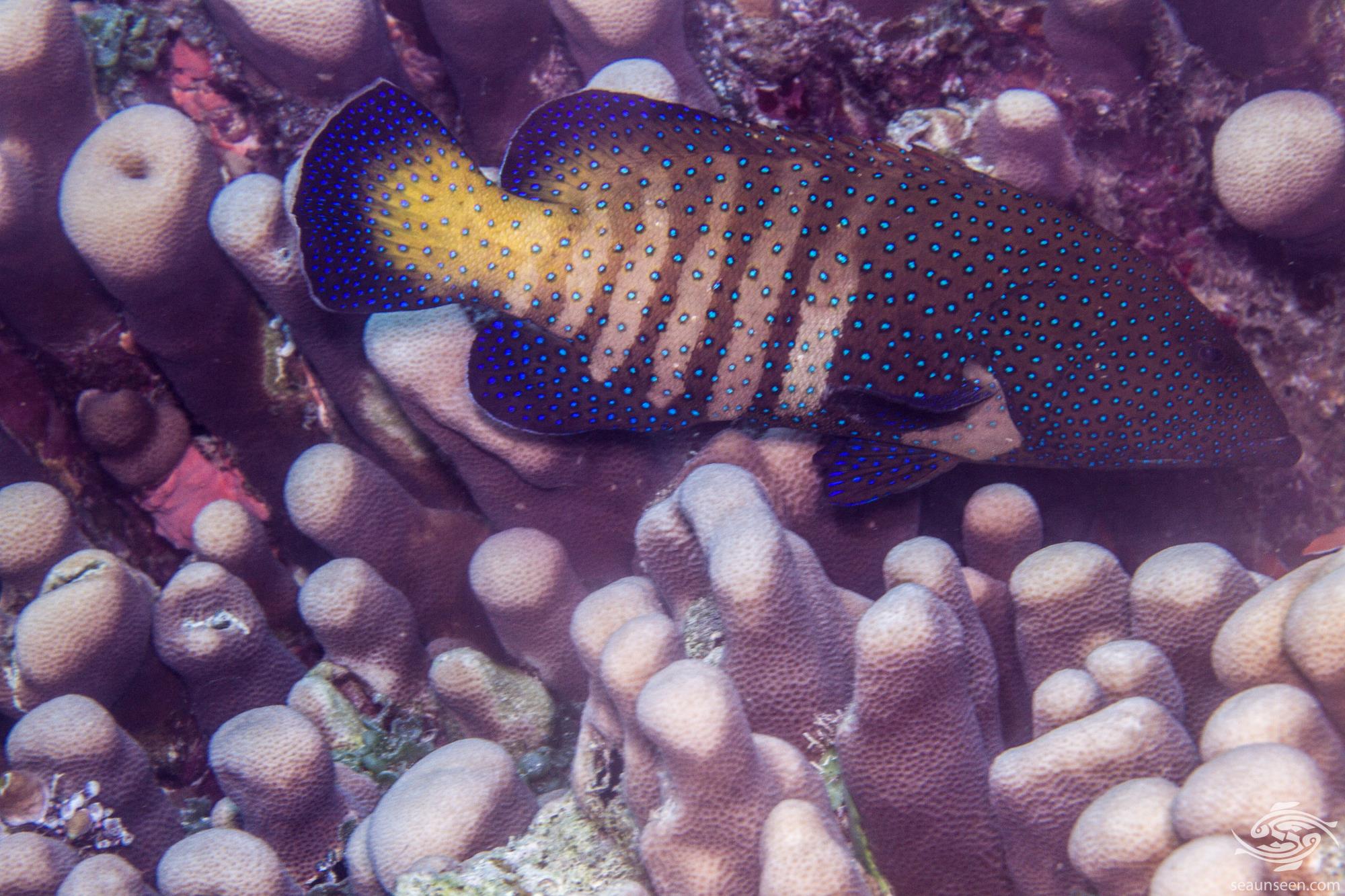 The Peacock grouper has a typical grouper shape and like many other groupers can lighten or darken its coloration depending on its mood. It’s typical background colouration is a brown colour with a large number of black ringed blue spots spread across the body. As can be seem in the images they can also put light whitish vertical bars on the body which aids with camouflage and is used for territorial disputes and mating.

As with all grouper they have a proportionally large mouth designed for swallowing their prey whole and they have a row of proportionally small teeth in the front of their mouth. Their maximum size is 60 cm in length although 30 to 40 cm is more common. In research conducted on the Great Barrier reef individuals of up to 40 years in age were found. 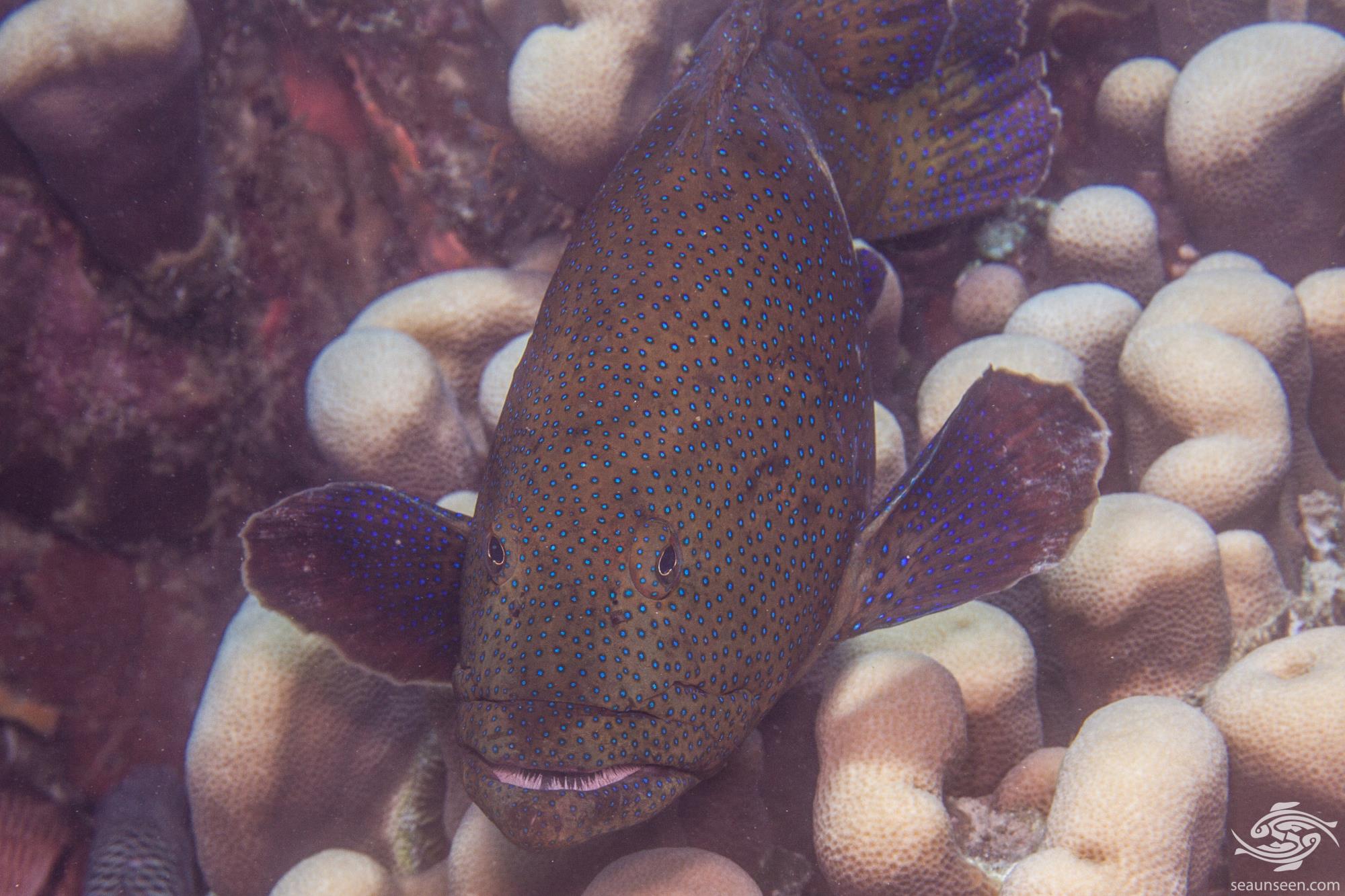 In Tanzanian waters, Peacock grouper are fairly shy fish when it comes to divers and will normally swim away from a diver and hide or they will peer out at a diver while hovering close to a hole that it can dart into.  They have the ability to lighten their coloration and will sometimes have white vertical bars down their body. These bars are used in face offs between males in territorial disputes. The two males approach each other from the front and then turn sideways at close to a right angle so that each can see the others body.

They then alternatively lighten and darken their colouration with the winner usually being the larger and capable of a greater colour change. If the males are close in the competition then this leads to a physical fight. The males also make threatening motions with their mouths during the confrontation.

Peacock grouper are the most widely spread of all the groupers. They are found on the East coast of Africa from Durban in the south to the Red sea, eastwards to the mid Pacific including most islands. They are typically found on exposed reefs rather than in protected areas or estuaries. In 1950 they were introduced into Hawaiian waters in an attempt to introduce a new food crop. However multiple cases of ciguatera poisoning occurred which were traced back to the Peacock Grouper.  Further research indicated that 18 % of the fishes contained ciguatera above safe levels. They are now classified as an invasive species in Hawaii. 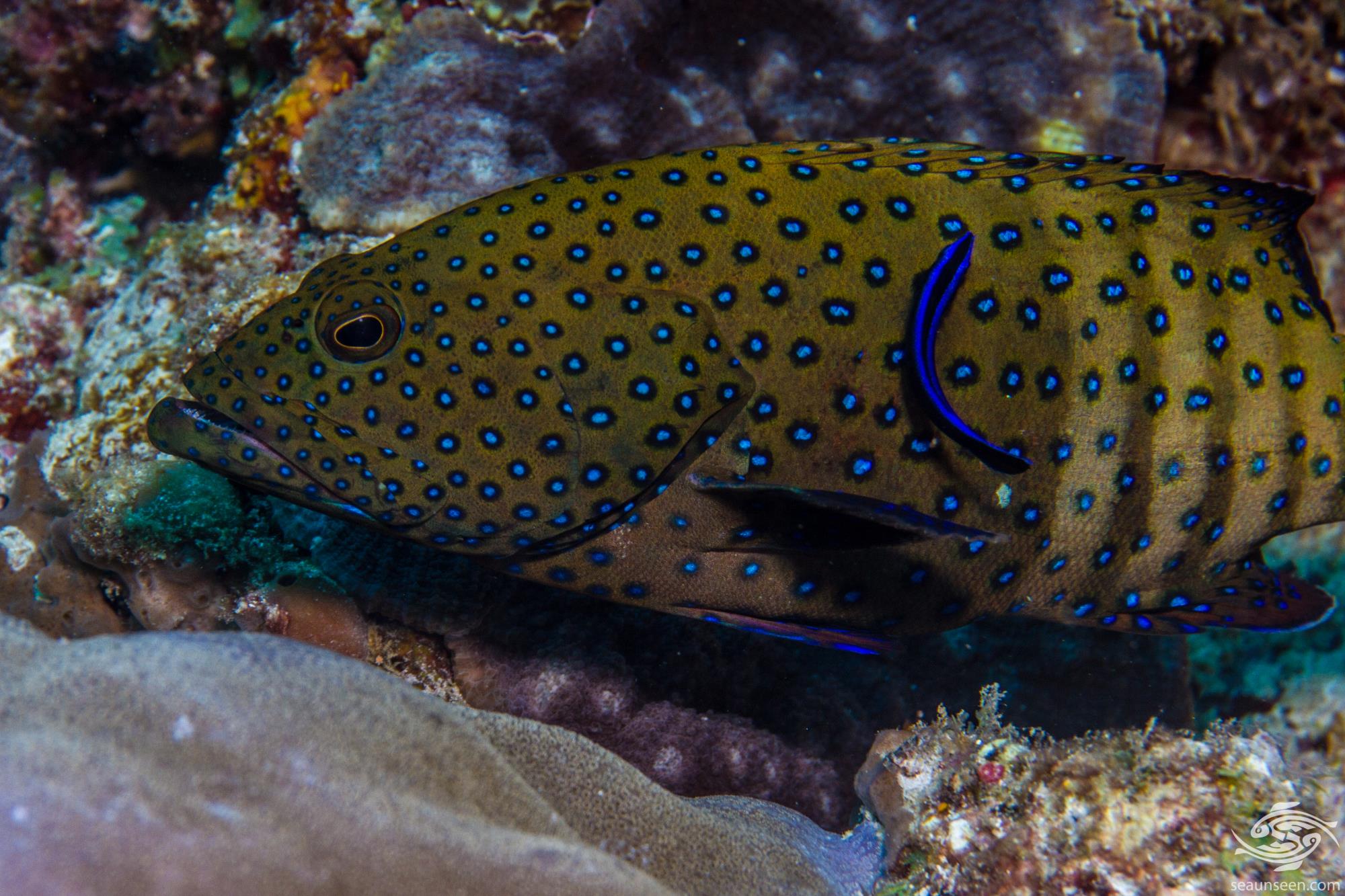 The main diet of Peacock grouper is small fishes and crustaceans, however given they are caught by fishermen on the hook this indicates that they will scavenge as well. They are ambush predators and feed in the early morning and late afternoon when their coloration gives them more camouflage. Their main diet is small fishes and they have a preference for juvenile Parrot Fish and Surgeon Fish. 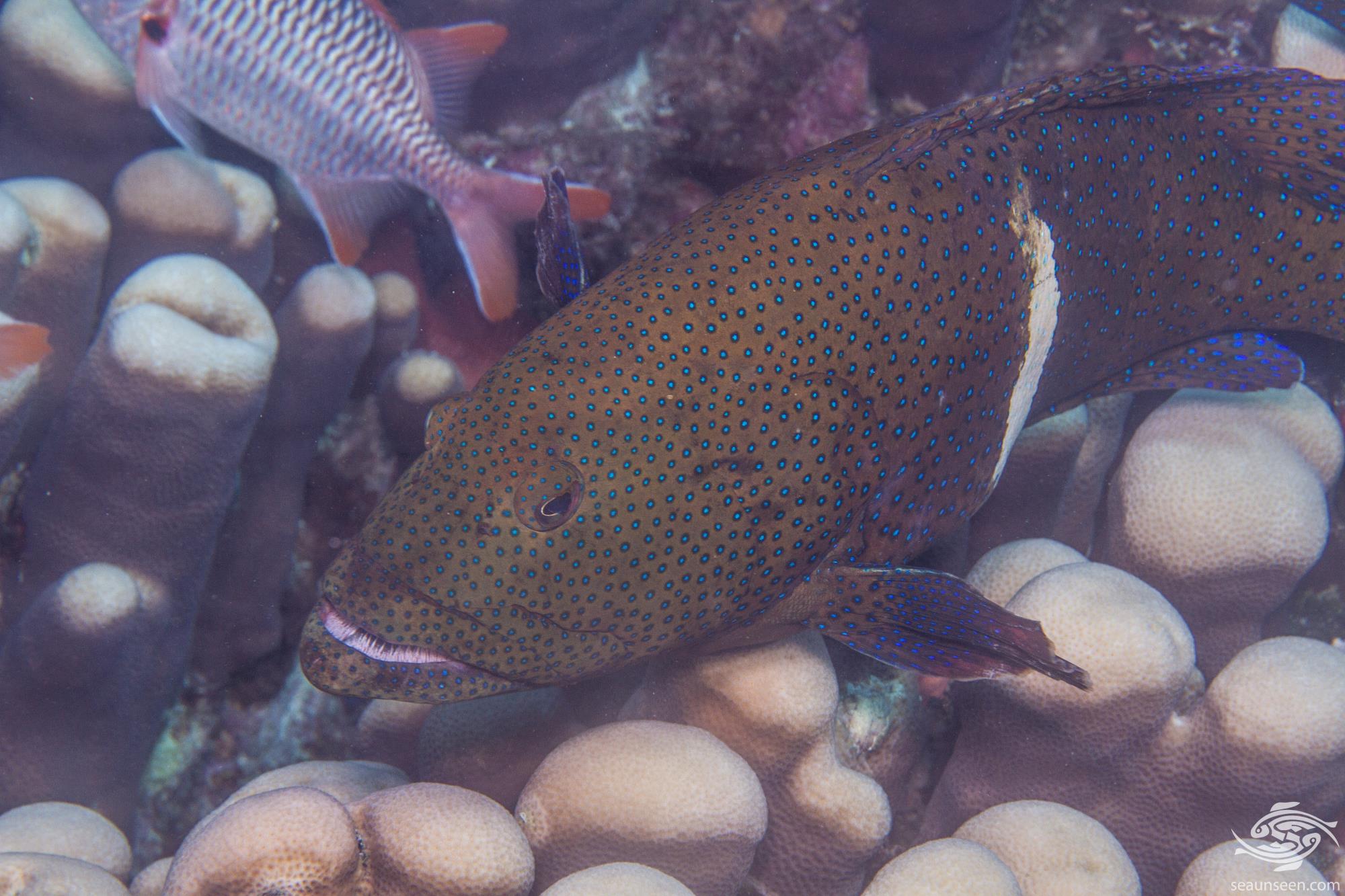 Males typically have a harem of eight to twelve females in their territory and will visit the females on a daily basis, When females are ready for egg laying they darken the body except for a white patch in the middle. This can be seen in the image above. Peacock Grouper are protogynous hermaphrodites and after the juvenile stage are female. Based on social and environmental cues some larger females will turn into males. Females become sexually mature after roughly 1.2 years and the switch to males typically occurs at around 11.5 years.  Mating typically occurs around spring tides when there is more water movement.

With their bright coloration these fish are kept in large aquariums by some specialised collectors but because of their propensity to eat smaller fish great care has to be taken with their tank mates. 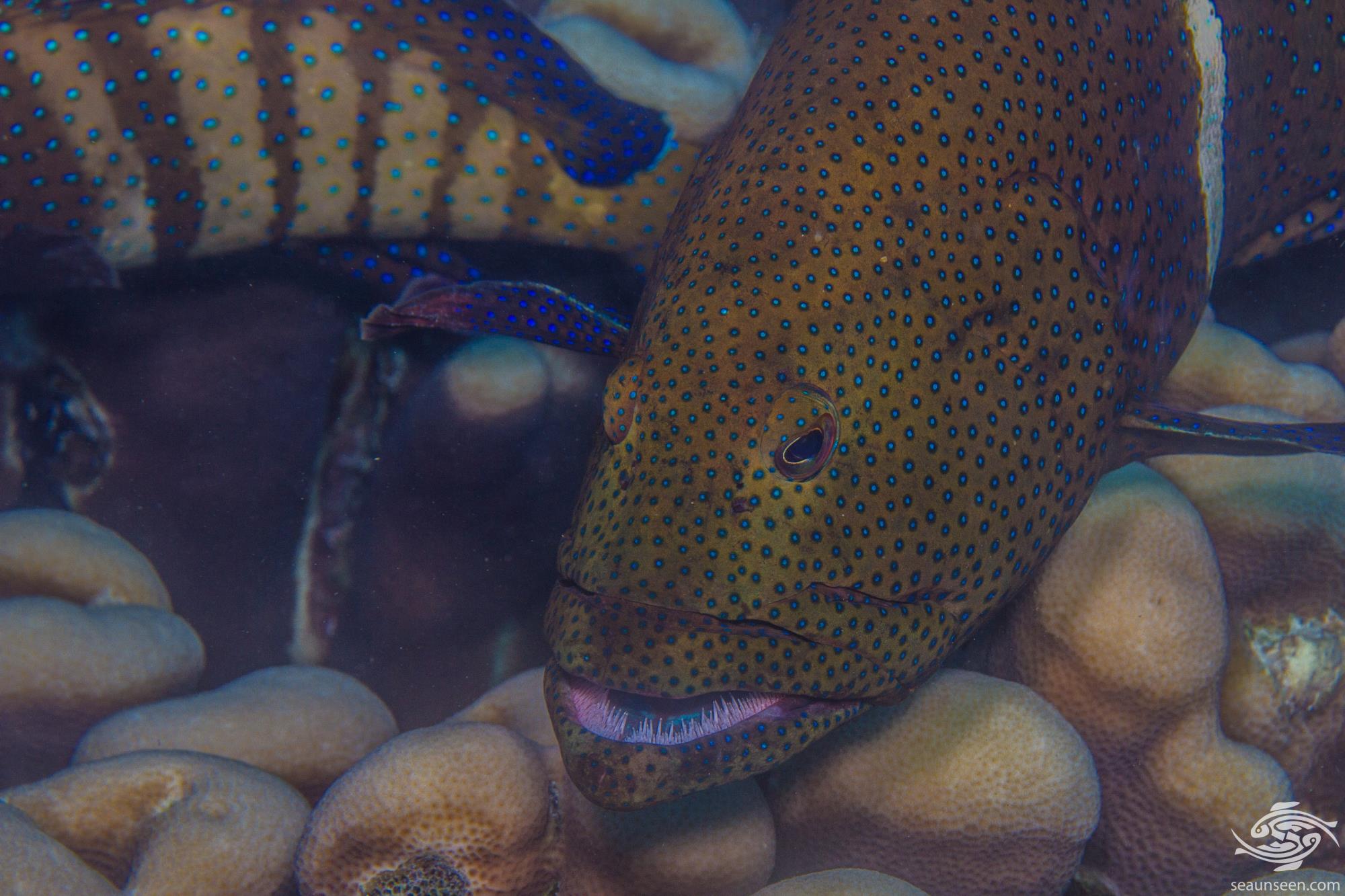 The Peacock Grouper is fished commercially and in most areas of the Tanzanian coast is heavily over fished. If one dives in the Marine Park on Mafia Island there are noticeably far greater numbers of this species. Equally there are greater numbers of Parrot fish outside the Marine Park, with juvenile Parrotfish being the favorite prey of this species.