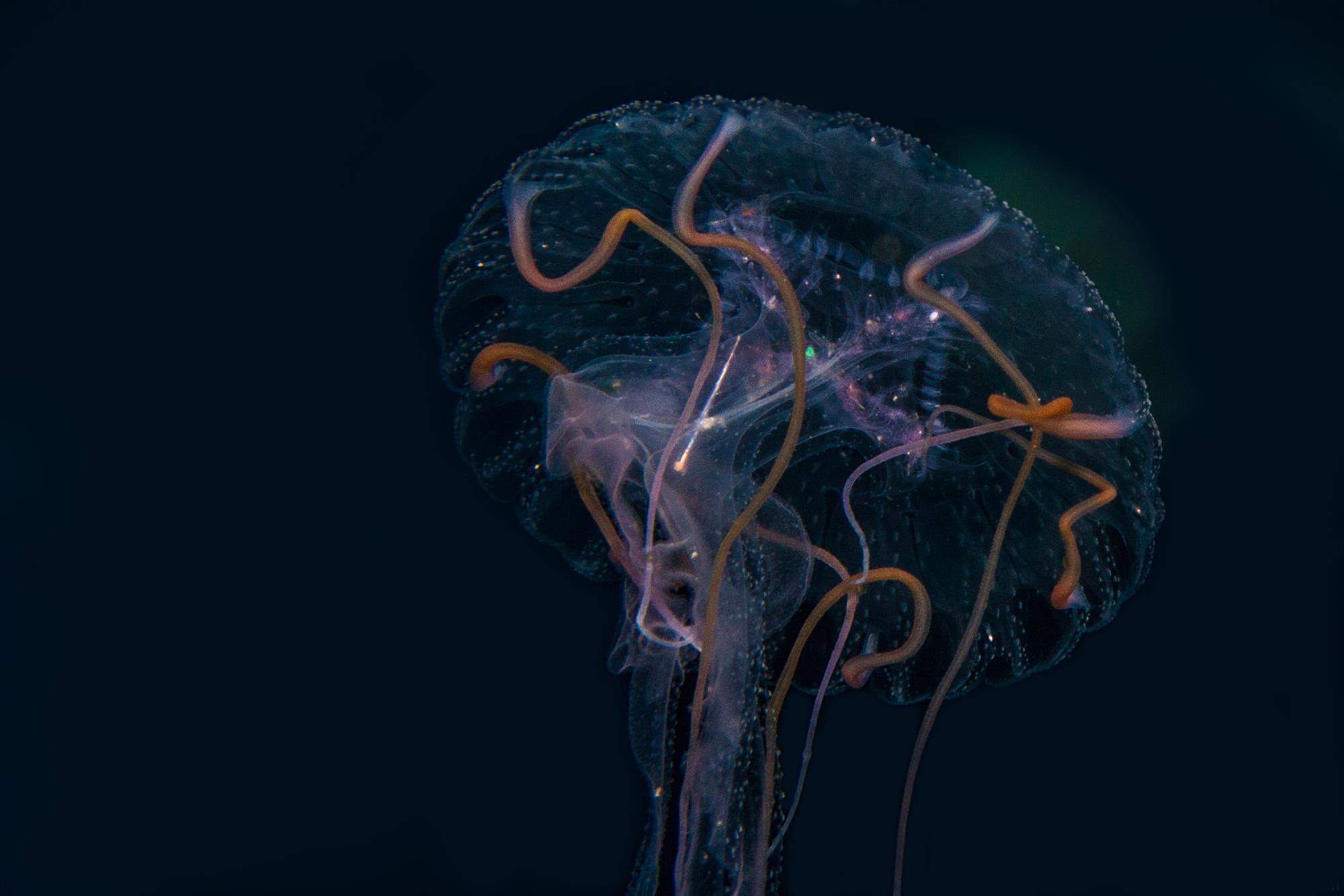 Pelagia noctiluca is sometimes encountered off the Tanzania coast in summer. Previously there were several jellies in the Pelagia Genus but they are now considered to be monotypic. They are known by several common names, the Mauve Stinger, Purple Stinger and the Purple-Striped Jellyfish.  The jellies in these images were photographed off Dar es Salaam , Tanzania.

Pelagia noctiluca is a transparent jelly that varies in colour from white to a blue-purple colour.  The bell grows to approximately 12- 15 cm in width and has 8 arms that are a similar color to the body.  The top of the bell is concave with pigmented markings on it. The skirt used for propulsion curves downwards off the top of the bell.  The arms contain mouths that transport food to the jelly’s stomach. 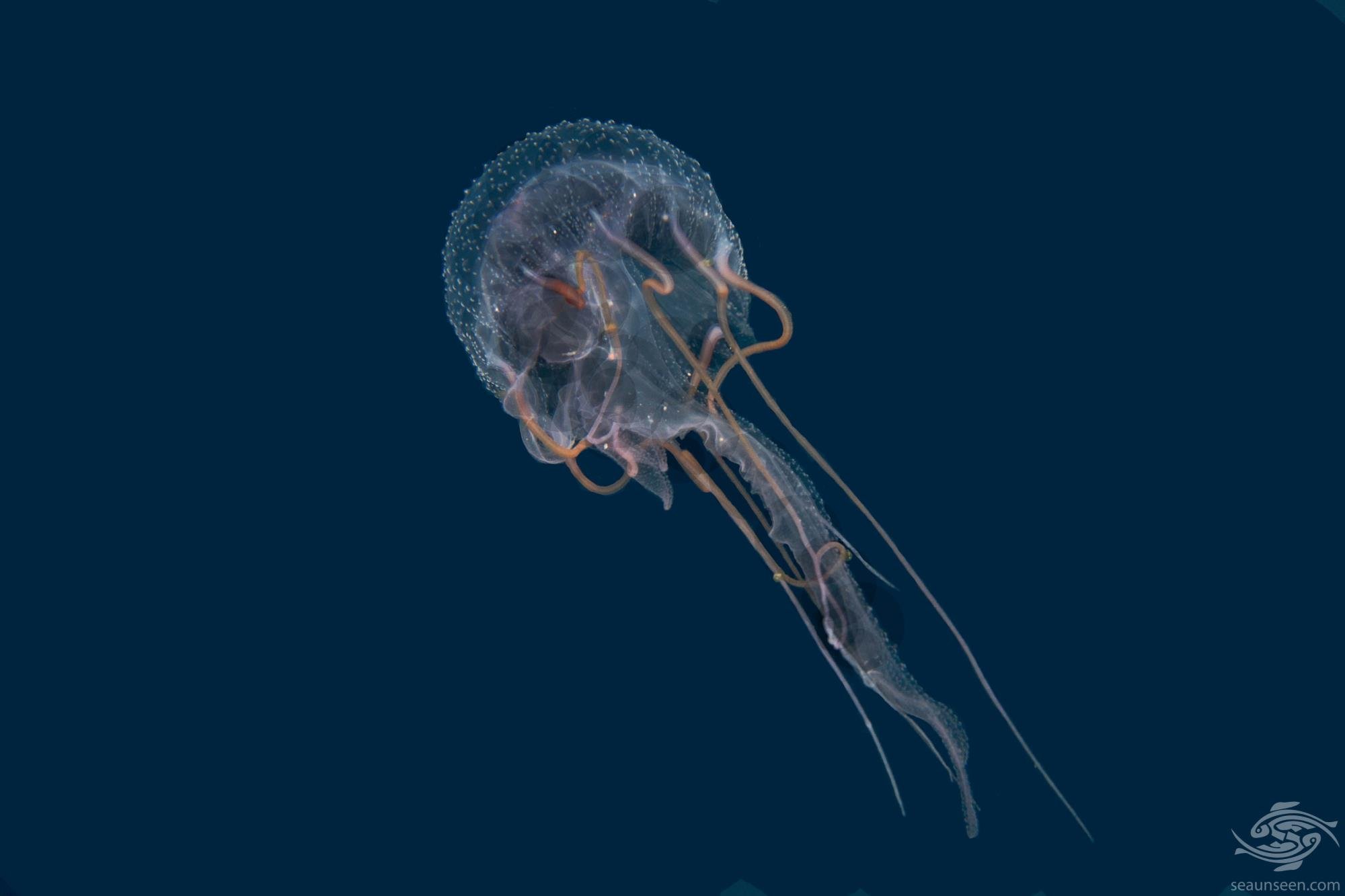 The tentacles and the bell have large numbers of nematocysts or stinging cells on them. These are similar to a tube that has been pulled inside out into its self with a sharp point and has a mechanism to pump poison through the end of the point. These nematocysts are extremely small, about 0.001 mm in diameter.
There is a trigger on the exterior of the tentacle and when this trigger is activated either chemically or physically the tube or tubule as it is known inverts its self. Pushing outwards and pushing the point into the prey, it then pumps poison up the tubule into the prey. This process of firing takes place in 700 nano seconds which is extremely fast and occurs with substantial pressure. In some species the point is able to penetrate the shell of small crustaceans.
There are two types of stinging cells in jellies tentacles , nematocysts and spirocysts and these inject canhypnotoxin, thalaxin and congestin into the prey. Hypnotoxin has an anaesthetic effect and paralyzes the prey. Thalaxin has an allergenic action, generating an inflammatory reaction. Congestin paralyzes the circulatory and respiratory systems of the prey.

Pelagia noctiluca can deliver a fairly painful sting, the effects of which vary from individual to individual. Usually localized swelling , pain, itching and redness are experienced and can last for up to ten days.  Fortunately they only provoke severe allergic reactions in very few people. Blooms of these jellyfish have disrupted tourism in the Mediterranean and have damaged commercial fish farms in Ireland. For more information on how to deal with the stings see our post here. 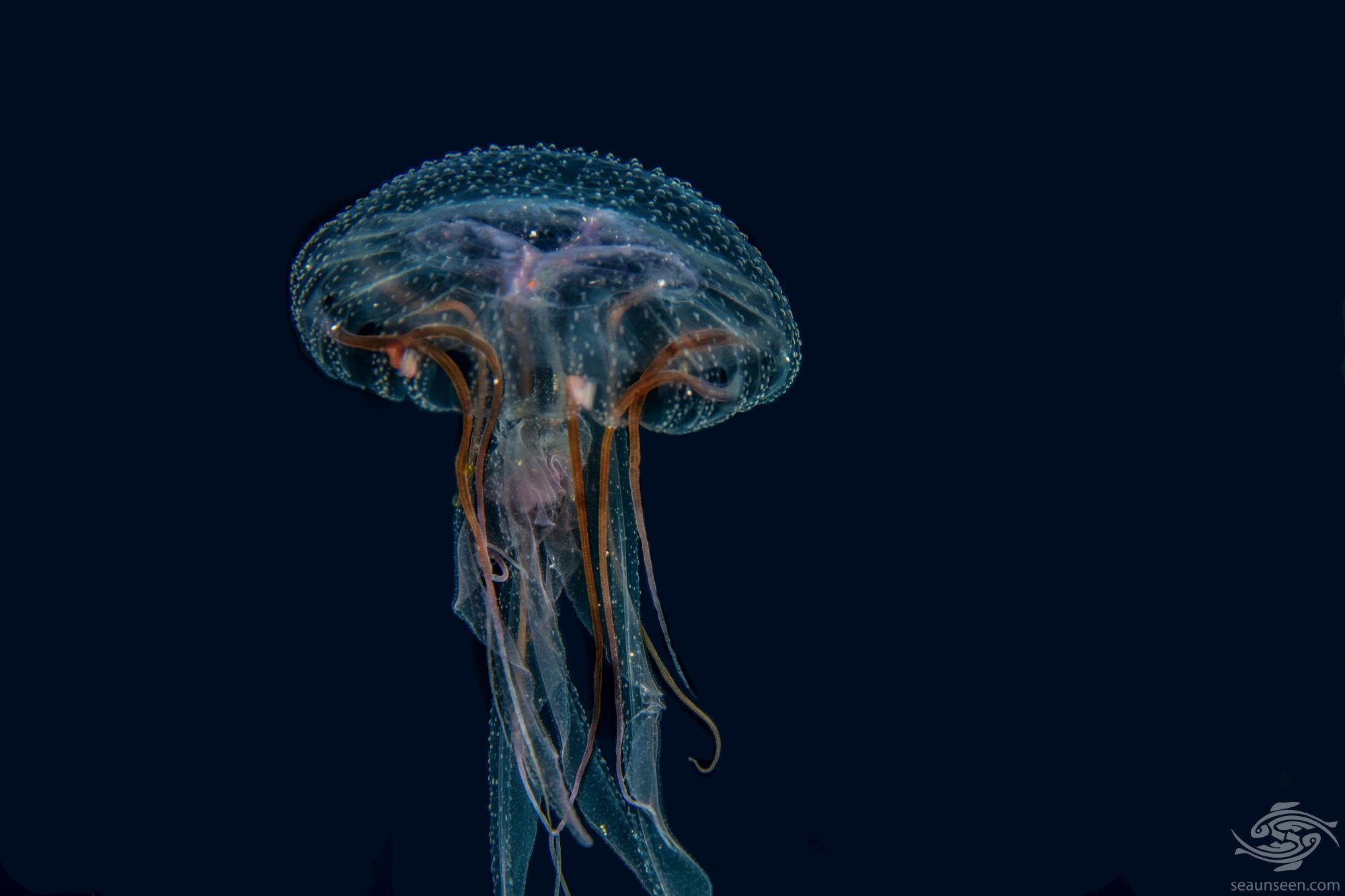 PELAGIA NOCTILUCA IN THE WILD

Pelagia noctiluca are sometimes seen in early spring and summer off the Tanzanian coast, usually in groups of several thousand with a density of roughly one every 2 square meters. They seem to be deep during the day but at night come up to just below 5 meters and seldom go higher in the water table.

They have the ability to bioluminesce and produce short flashes of light. These are easiest to see at night, when most of these images were taken. Once one puts a light on them at night, they swim downwards and this seems to be their logic when encountering light.  They are sometimes encountered during the day in the upper water table but only when the visibility is very poor. 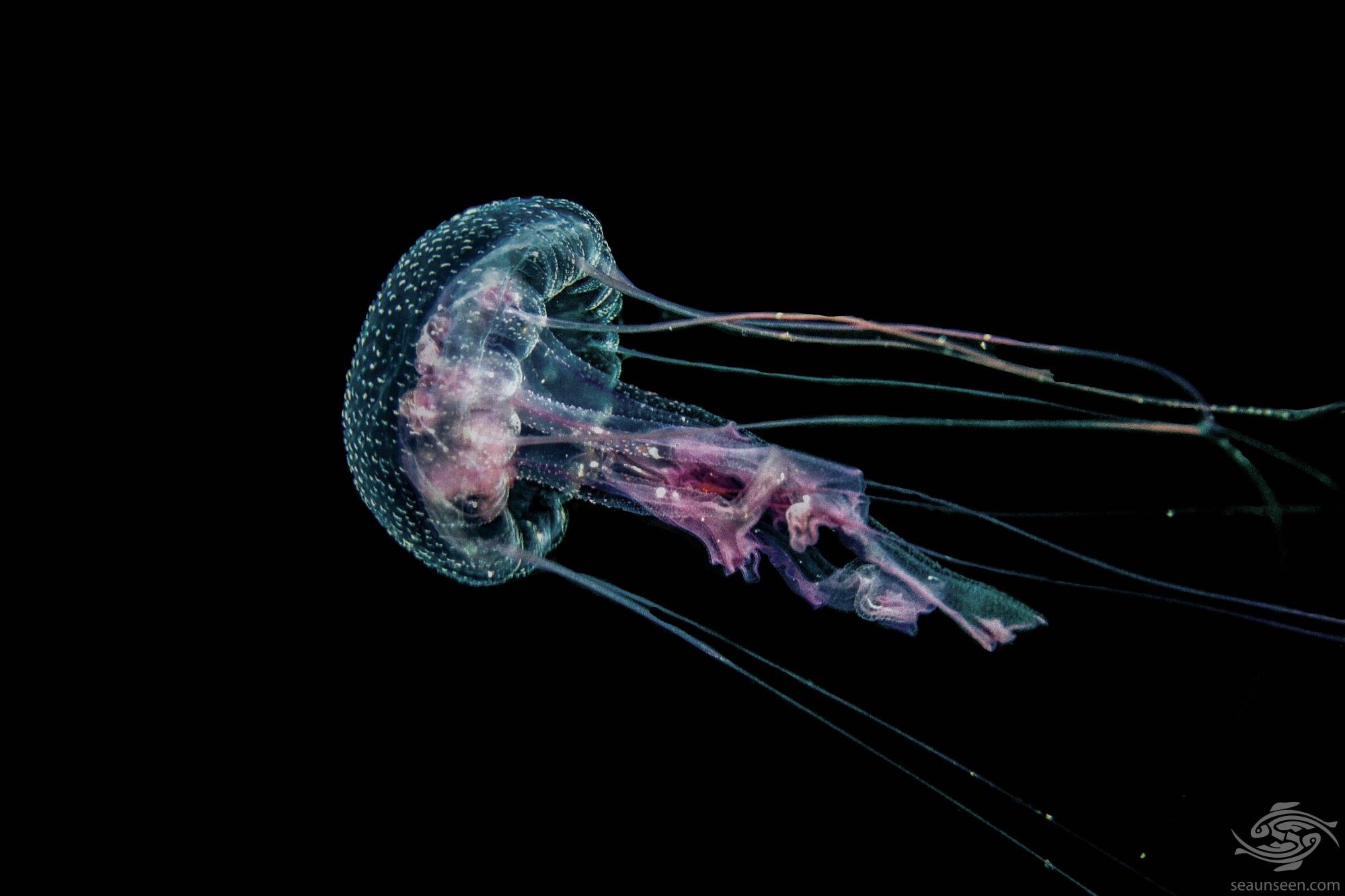 Pelagia noctiluca do not have what we would traditionally call a brain or centralized concentration of nerve cells. Instead they have a nerve net distributed throughout the body which has various simple sensors on it and operates in a decentralized fashion. Information is transmitted through the net and via a circular set of nerves that runs around the bell with rhopalia on it, small structures containing sensors to sense light and gravity.

If one watches a jelly, particularly when they bump into something, there is often a pause before they do something afterwards. With Pelagia noctiluca if a diver swims past them, the wash from the fins blows them off course and they are swirled around. Once the effects of the swirl are over, there is a pause and then they usually resume their previous activity. Presumably this pause is caused by the decentralized logic system resetting its self.

The circular nerve net around the bell also controls the contraction of the bell for propulsion. Jellies use their light sensing cells to orientate themselves against the light. They use pulsations of their bell to propel themselves forward and having no sight, have limited control over where they will end up, their directional logic being generally limited to either moving away from light or towards it. Recent research indicates that some jellies may orientate their direction on a current but this is not yet proven. 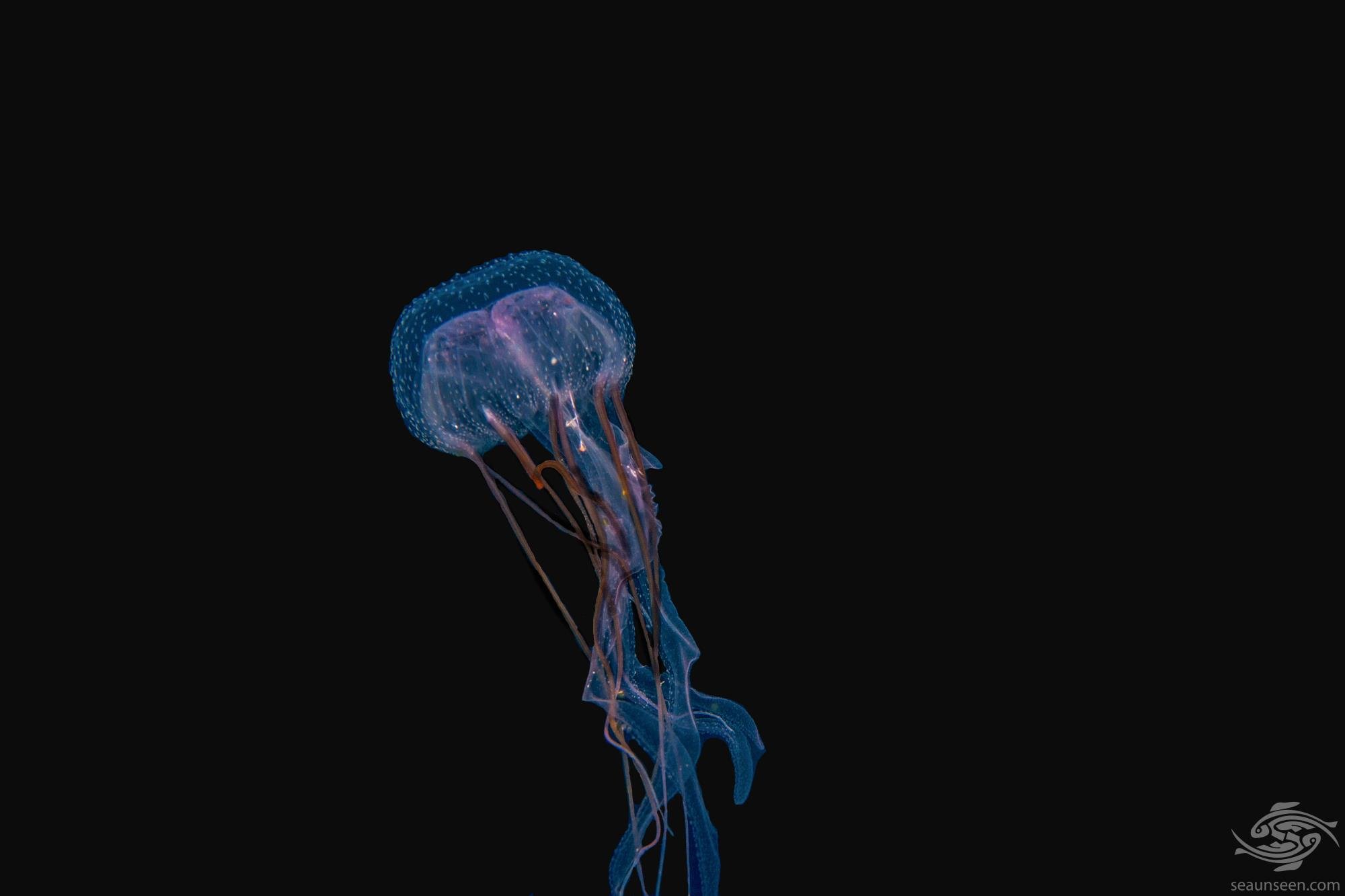 The Pelagia noctiluca jellyfish is found across the worlds temperate oceans and is usually a deep water species. 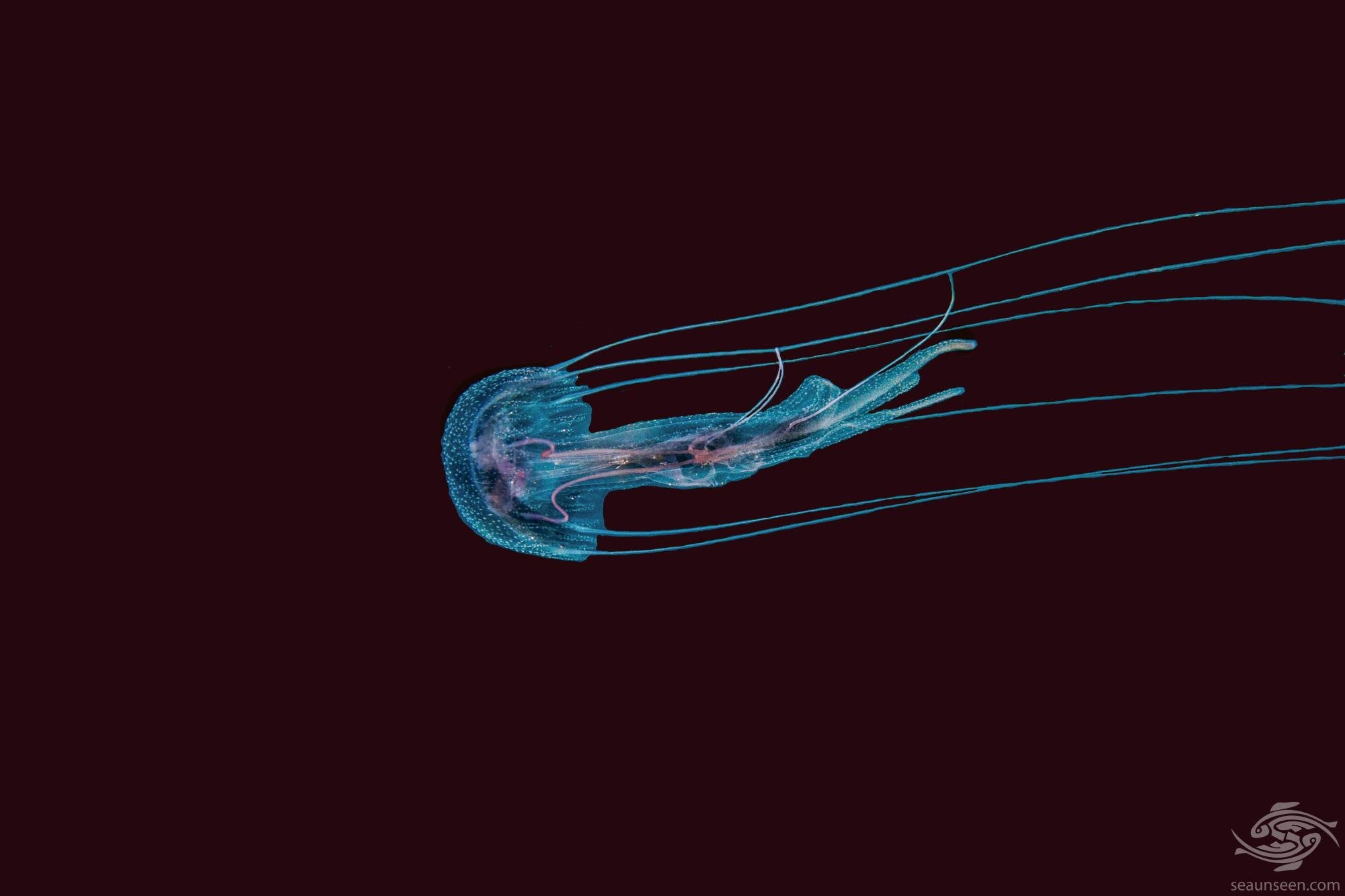 Pelagia noctiluca  feed on zooplankton and have been observed eating Thalia democratica , a species of selp. The stinging cells on the tentacles are used to capture prey and the prey is then brought up to the mouths by contracting the tentacle.  Research in the Mediterranean indicates that their main diet is comprised of fish eggs and they may also prey on Mnemiopsis leidyi better known as Leidyi’s comb jellies .  The jelly in the image below has trapped a round yellow object on its tentacle and is in the process of drawing it up to its mouth. 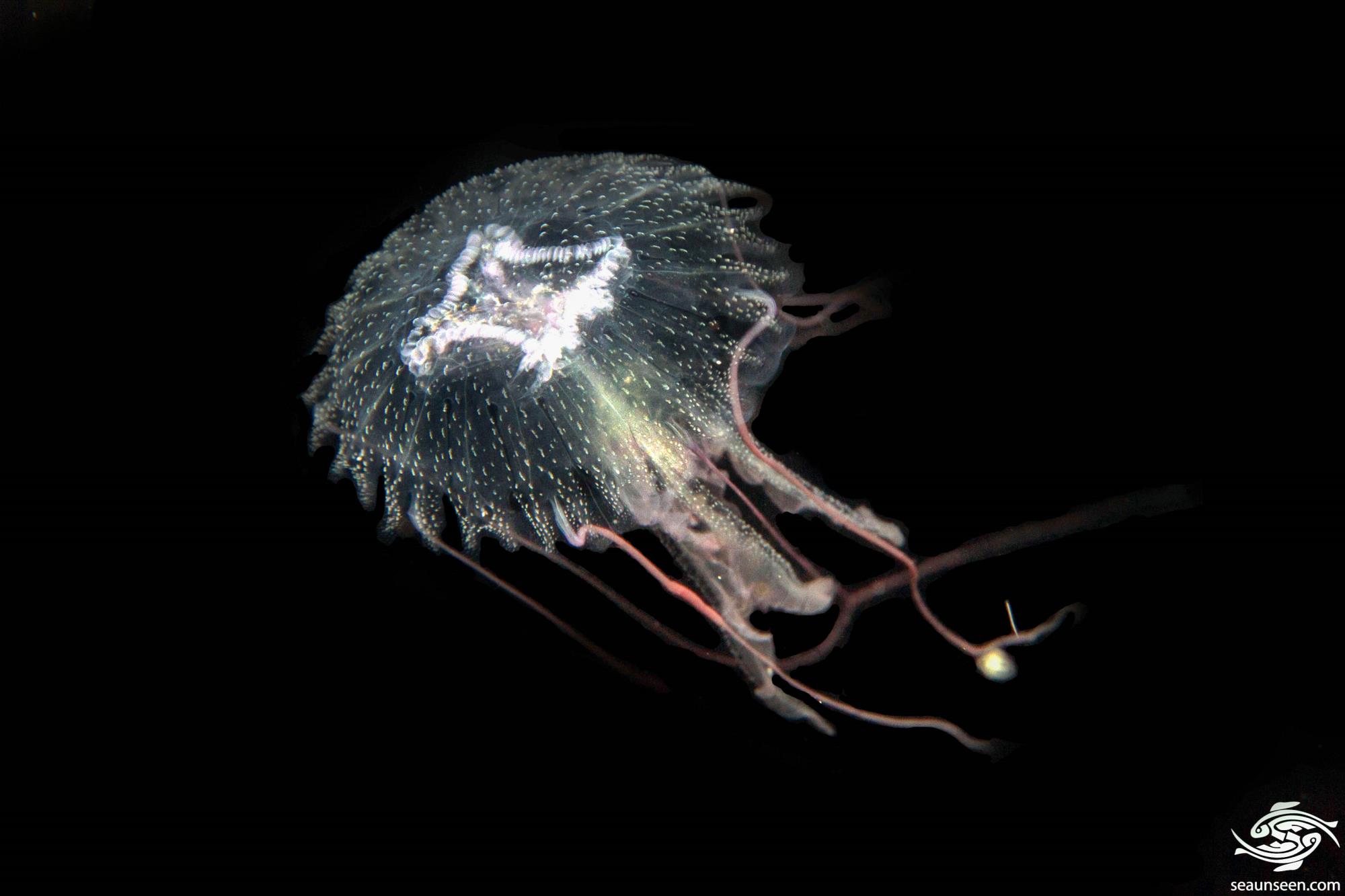 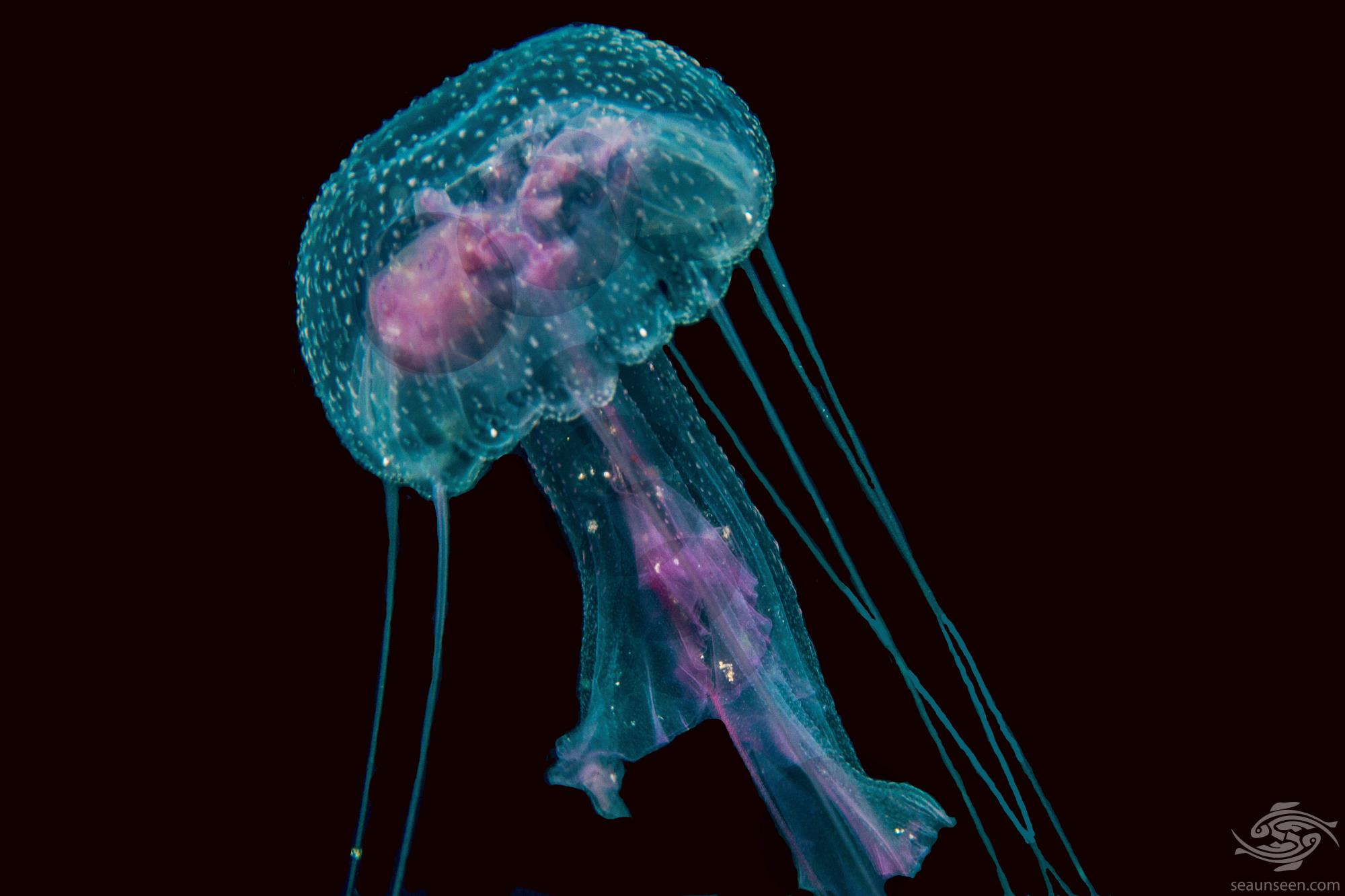 Pelagia noctiluca possibly because they are a deep water species seem to miss out the polyp stage and have the ability to spawn and fertilise eggs which once they hatch develop into a planula. These are free swimming for three days and after seven days is a fully developed specimen in the medusa stage. This of course in ideal conditions allows their population to expand very rapidly. Additionally they reproduce throughout the year and do not seem to be bound by any particular condition. 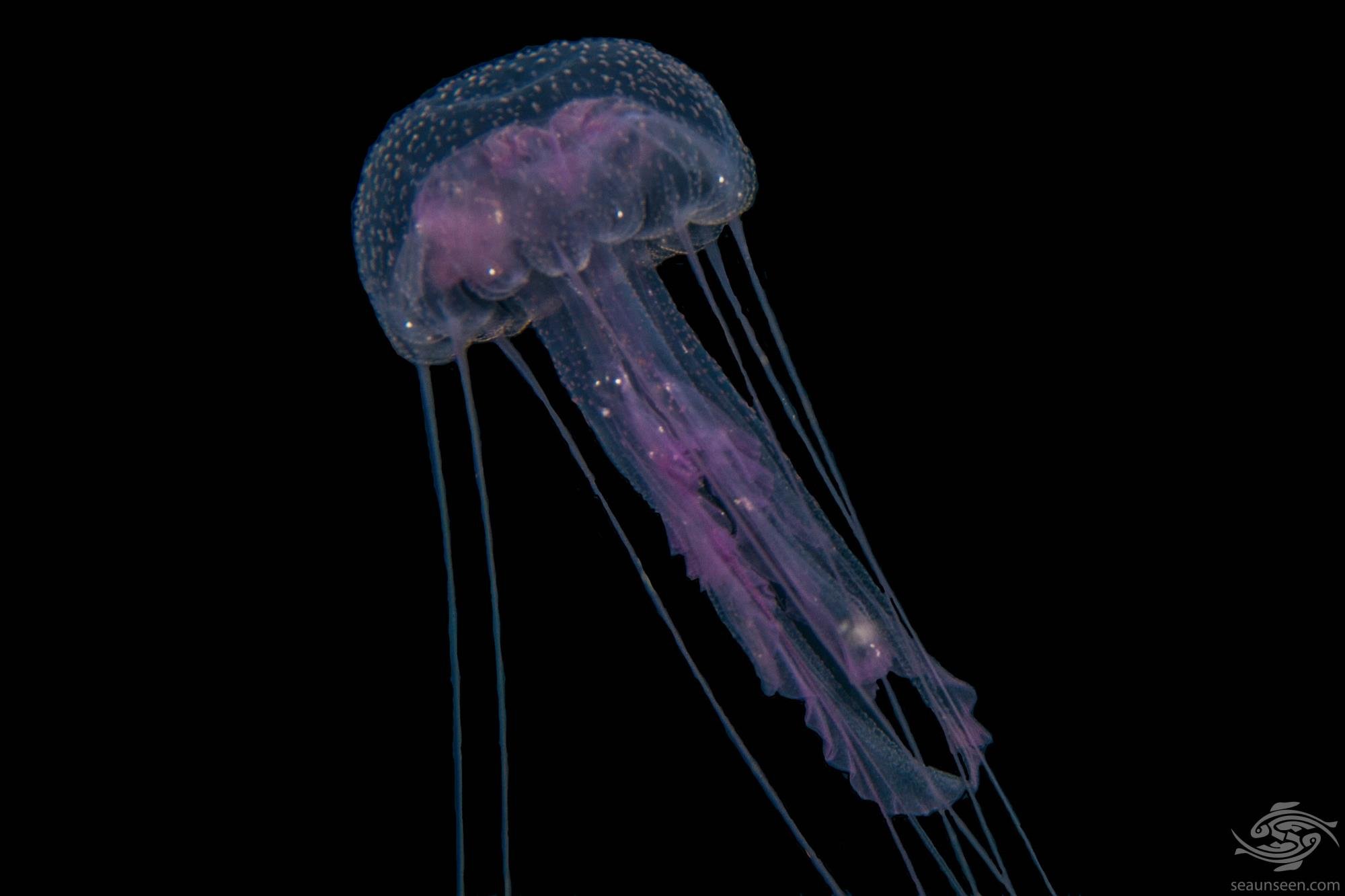 In the early 1980’s there were large blooms of this species in the eastern Mediterranean and these soon spread to the Western Mediterranean. These blooms have a detrimental effect on tourism and fishing and appear to be occurring more regularly. Studies show that long term weather pattern changes appear to favor their breeding.  Logically these weather patterns must also fuel an expansion of their prey population as well to allow the population to expand. The natural predators of Pelagia Noctiluca being apex predators such as Tuna, Swordfish, Sunfish and Loggerhead Turtles are all under severe population pressure. A lack of these species allows the population of Pelagia Noctiluca to expand rapidly.