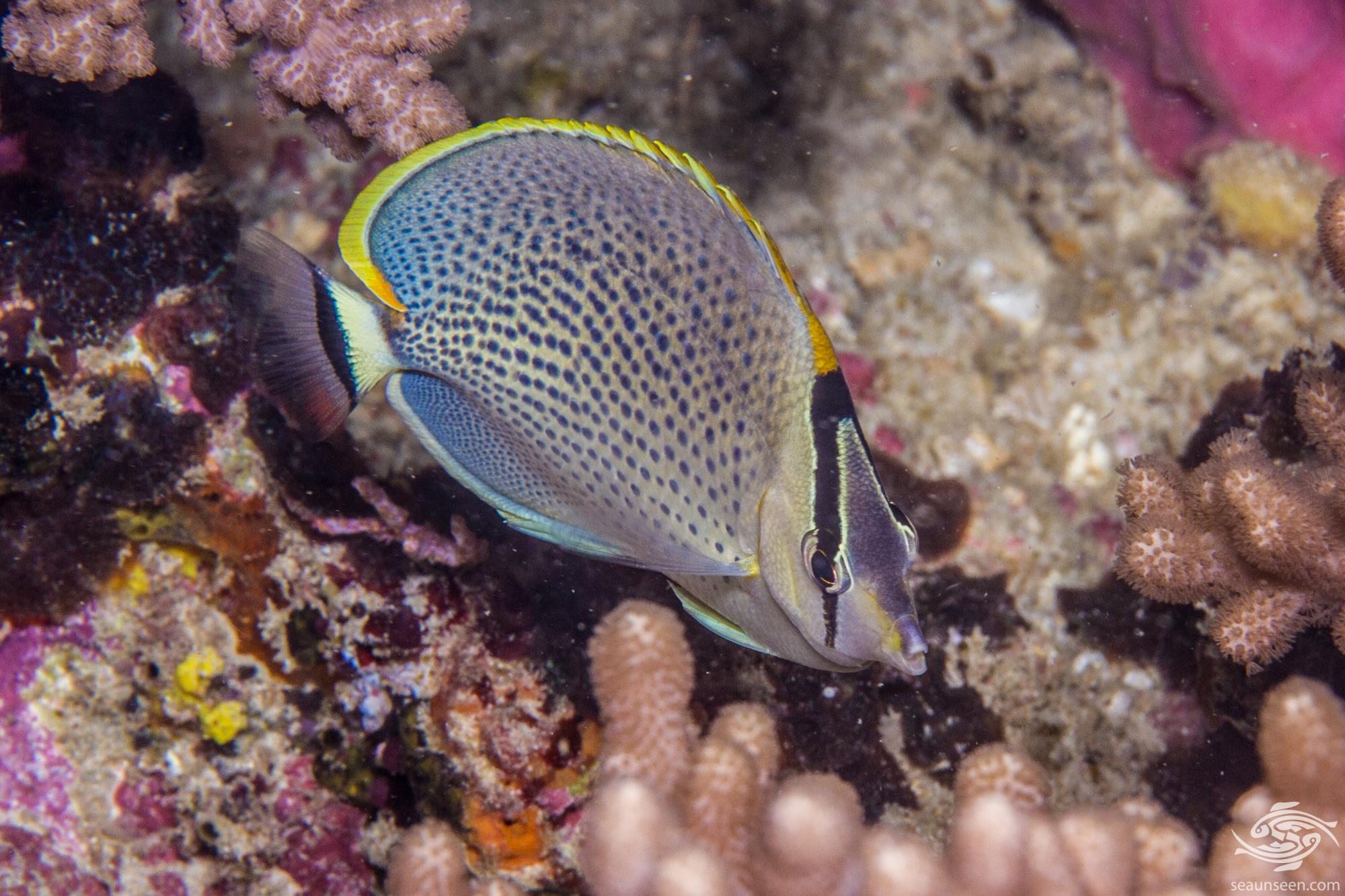 Peppered butterflyfish have a creamy yellow body with speckles across the main part of the body in lines on the lower section but losing the pattern higher up on the body. There is a vertical line through the eye and a white tail with a further vertical black line on the end of the tail.

The dorsal fin is tinged yellow on the outer edge.It is not as colorful as some other butterfly fish but it is an attractive fish. The peppered butterflyfish is fairly small as the butterflyfish go and grows to a maximum size of 12 centimeters. 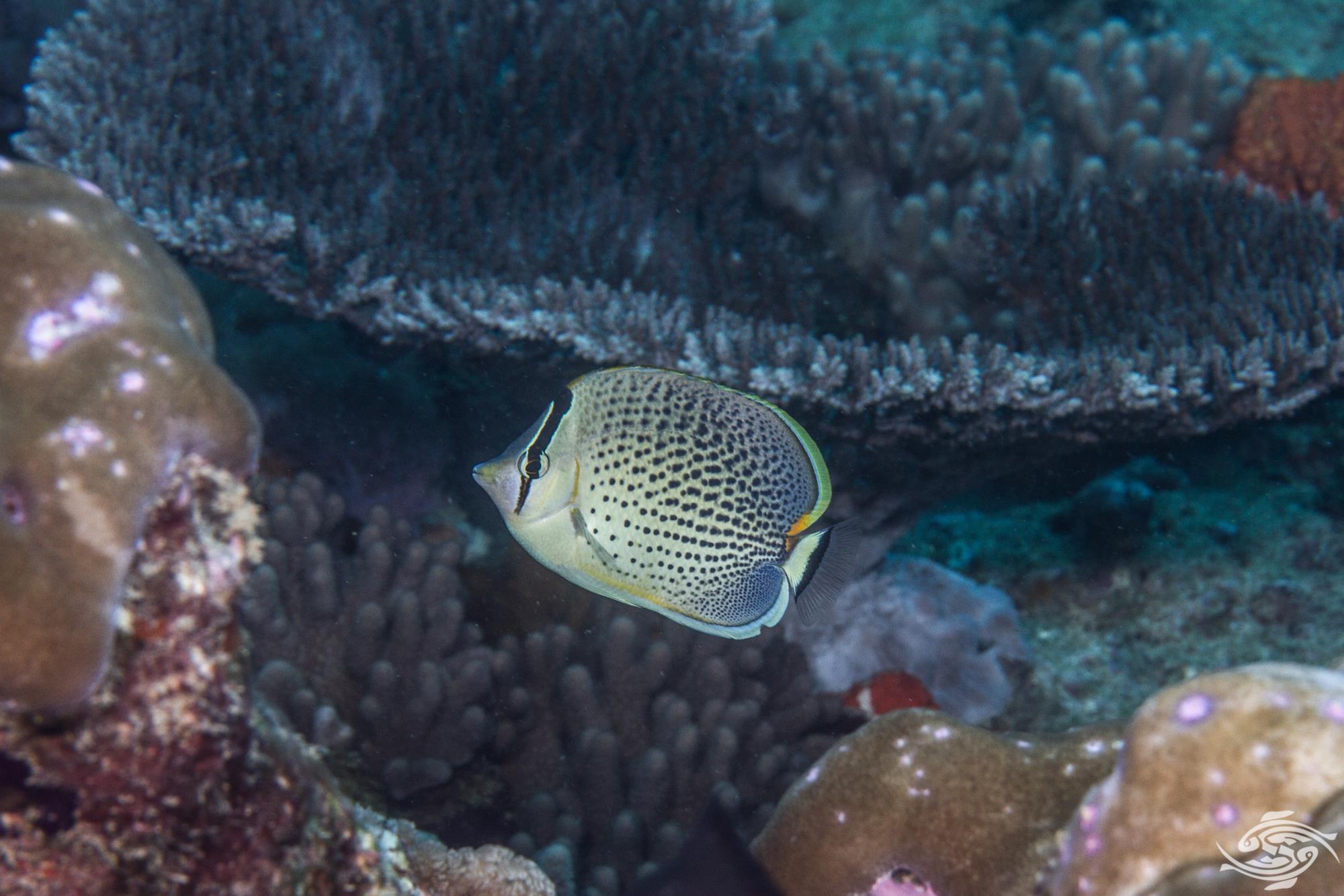 Peppered butterflyfish are often seen swimming across the reef in depths of 1 meter in open water picking on select pieces of coral polyps and algae. As with other species of Butterfly fish it is quick to hide in the coral. Juveniles remain well hidden in the coral seldom leaving cover and can sometimes be seen hiding in Staghorn coral. On the Tanzanian mainland coast they are probably the most common butterflyfish. 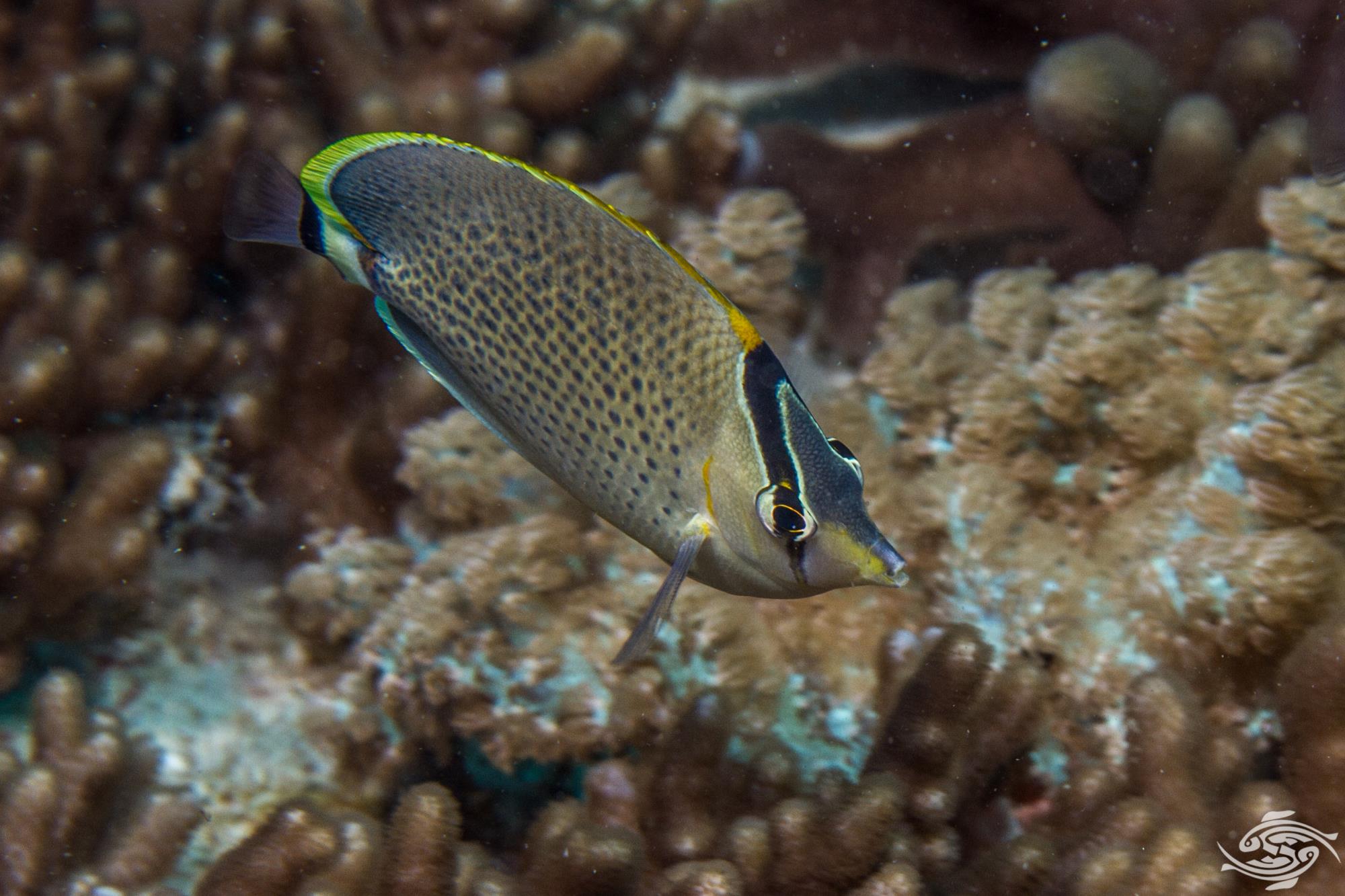 They are found across the Indo west pacific area mainly on coral reefs from depths of 1 meter to 70 meters. 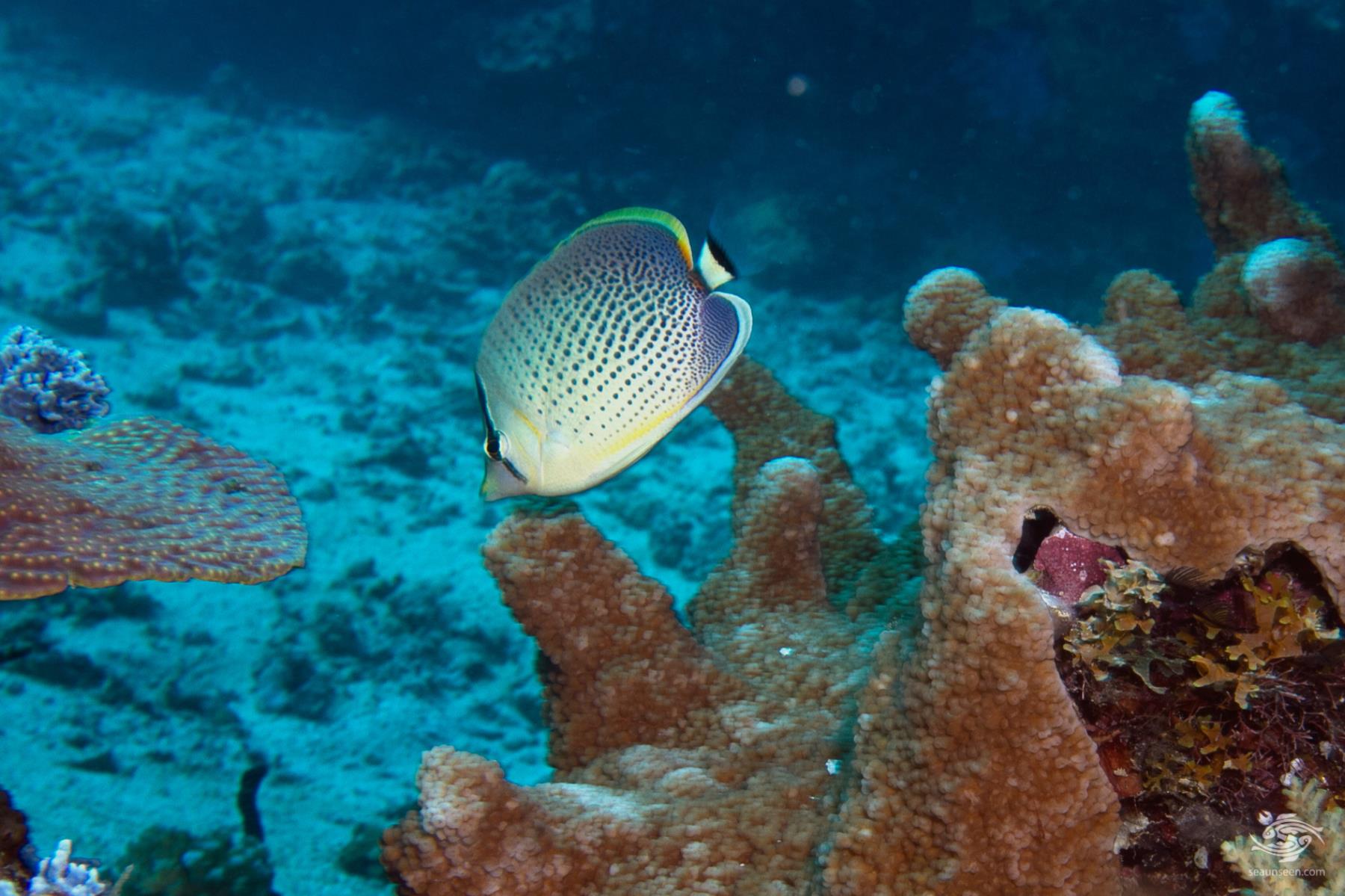 Peppered butterflyfish feed exclusively on coral polyps and algae. Butterfly fishes in general are monogamous and form pairs which can last for many years and are generally seen in pairs feeding on the reef. Occasionally several pairs join up while feeding, sometimes of different species and this allows an advantage when going through territories of other fishes, particularly damsel fish. As the damsel is chasing one member of the party off its territory, so the others can feed.

Butterflyfish are born to separate sexes and the male is thought to be slightly larger. In the case of the Peppered butterflyfish which form monogamous pairs, spawning is thought to take place in relation to the lunar cycles but this is not certain. They become sexually mature around the age of one year.
The eggs are spherical and buoyant and it is thought they hatch in 28 to 30 hours, once the eggs hatch a bony plate forms over the head area and these larvae are pelagic for quite some time before developing into juveniles. 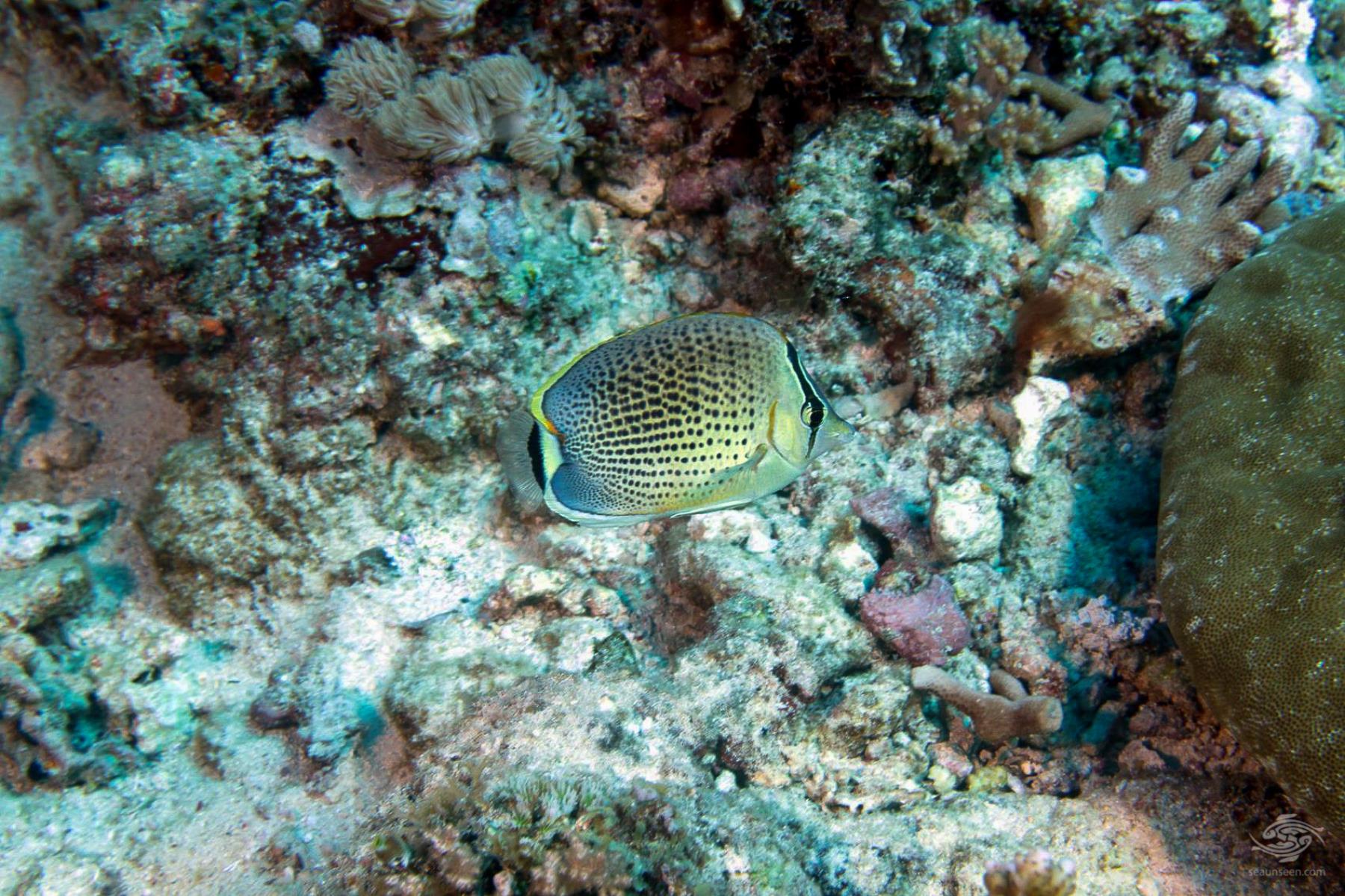 As an aquarium fish it can be weaned off its natural diet but because of the difficulty in doing so it is recommended for the experienced aquarist only. Once weaned onto other foods it will be a hardy member of a fish only tank.

Because they will eat corals and worms they are not recommended for a reef tank. It is recommended to provide plenty of hiding places for the peppered butterfly fish as they like to move in and out of hiding. They are peaceful fish, but if you wish to have more than one butterflyfish in a tank then you should introduce them at the same time. 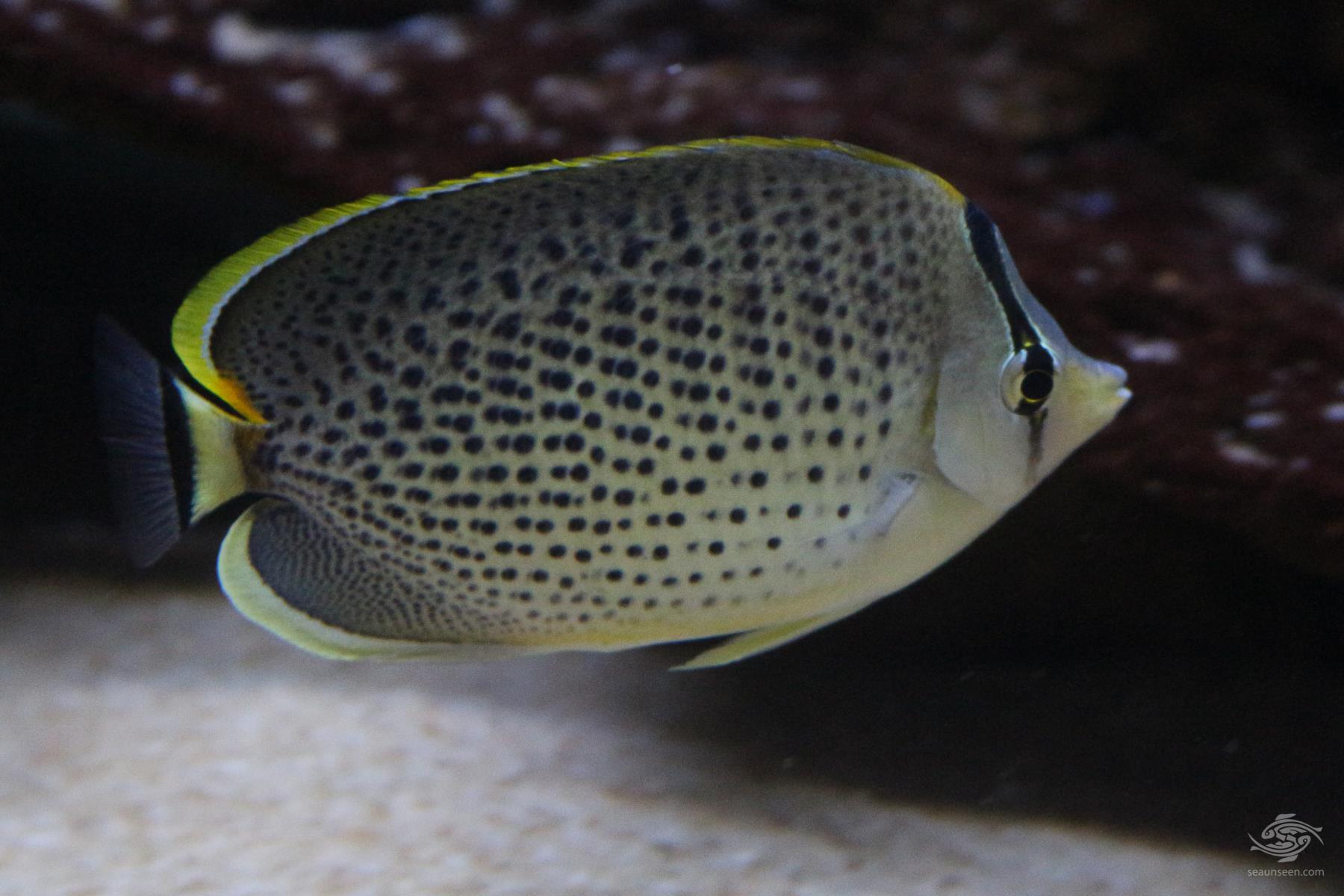