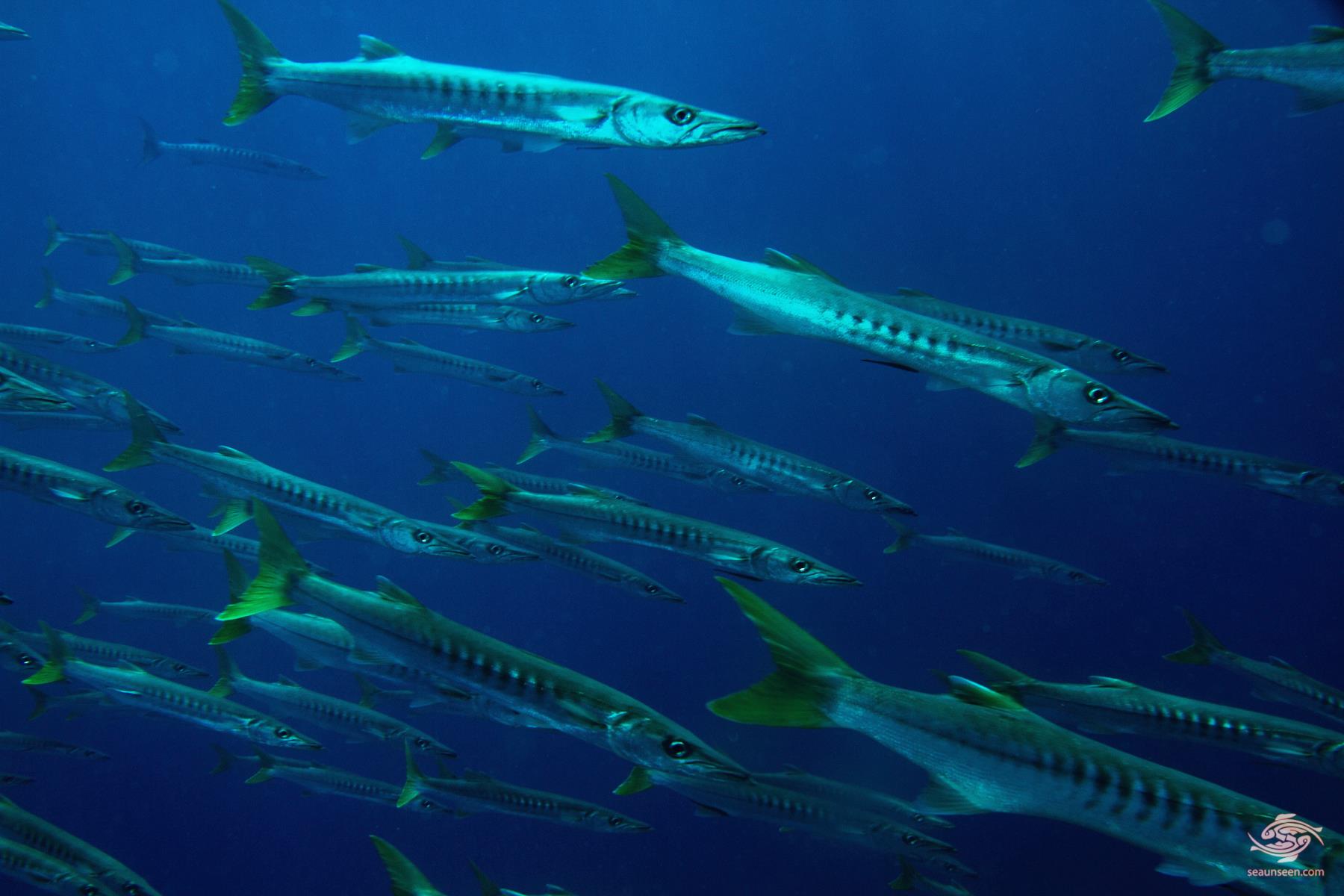 The pickhandle barracuda (Sphyraena jello) , is also known as the Jello Barracuda, Banded Barracuda, Yellowtail Barracuda and Sea Pike. Barracuda are known as the tigers of the sea and are voracious predators with formidable hunting skills.

They have a torpedo shaped silver body which is built for speed and acceleration. Across the back they have a series of pick handle shaped bars and an overhanging lower jaw. The mouth is filled with sharp teeth and the jaw is powerful, and used to literally rip their prey to pieces. They grow up to 1.5 meters in length and weigh up to 11 kilograms. The caudal and dorsal fins have a yellow tint to them and proportionally the eye is large. 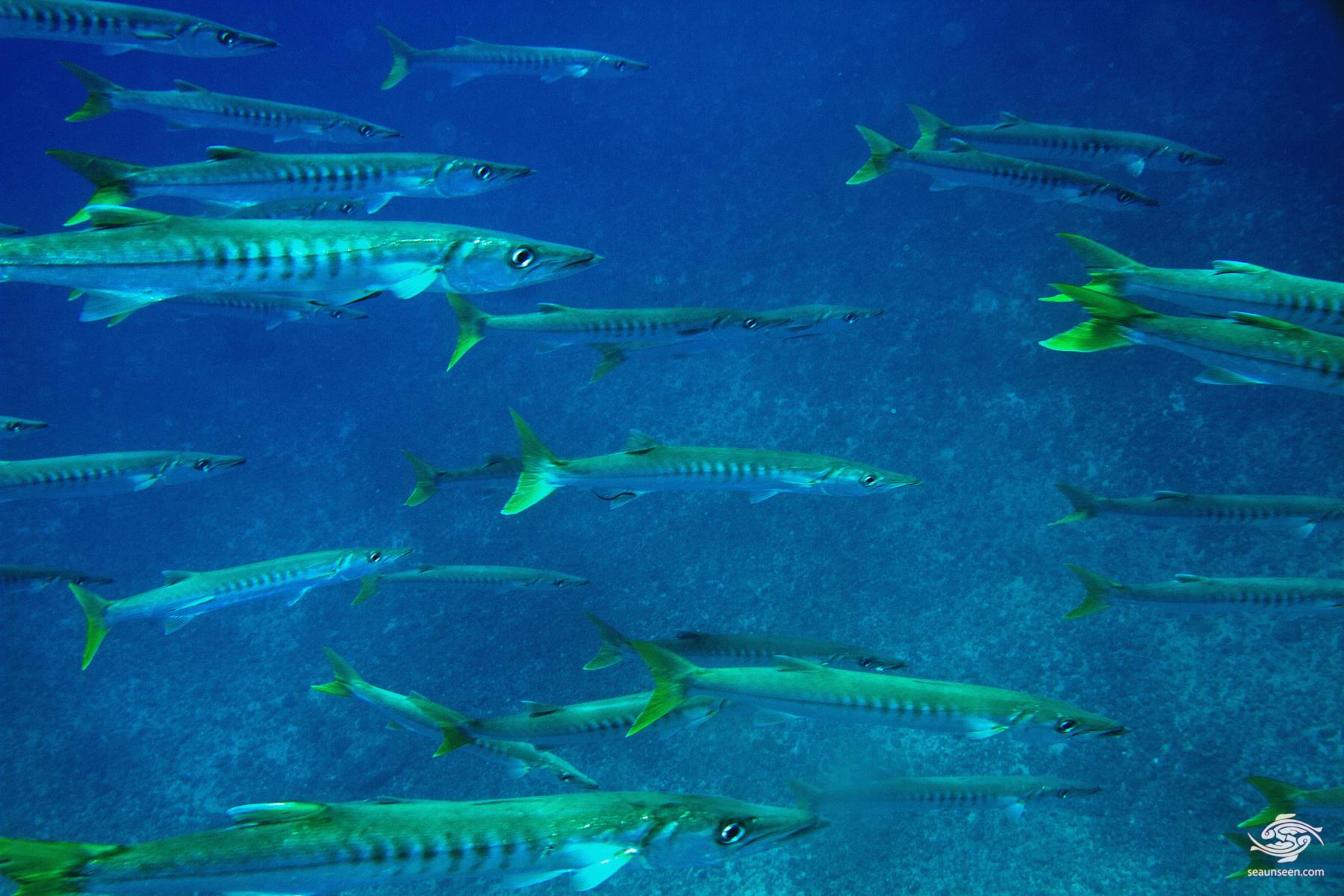 During the day pickhandle barracuda collect over the reef in large shoals giving them protection against larger predators. The larger predators such as sharks, dolphin, tuna and larger barracuda find it difficult to focus on one fish in the shoal. Barracuda are cannibalistic, and will eat smaller barracuda than themselves if the opportunity presents itself. During the night they separate and hunt the reef area. They have the ability to change their body color to some extent to suit their surroundings.

Juveniles will collect in large shoals in estuaries and sheltered areas for protection. Once they are larger they move out into the reef area. The age of a barracuda can be measured by the number of rings on its scales and the number of layers in its ear bone.

When they are shoaling divers can approach closely but they are uncomfortable with something bigger in close proximity and will generally move off. Sometimes the whole shoal will pass around a diver.

Juveniles are often seen in large shoals on protected inshore reefs and estuaries. Sometimes as seen in the image below, they are seen hiding in shoals of smaller fish such as these Orangelined Cardinalfish. 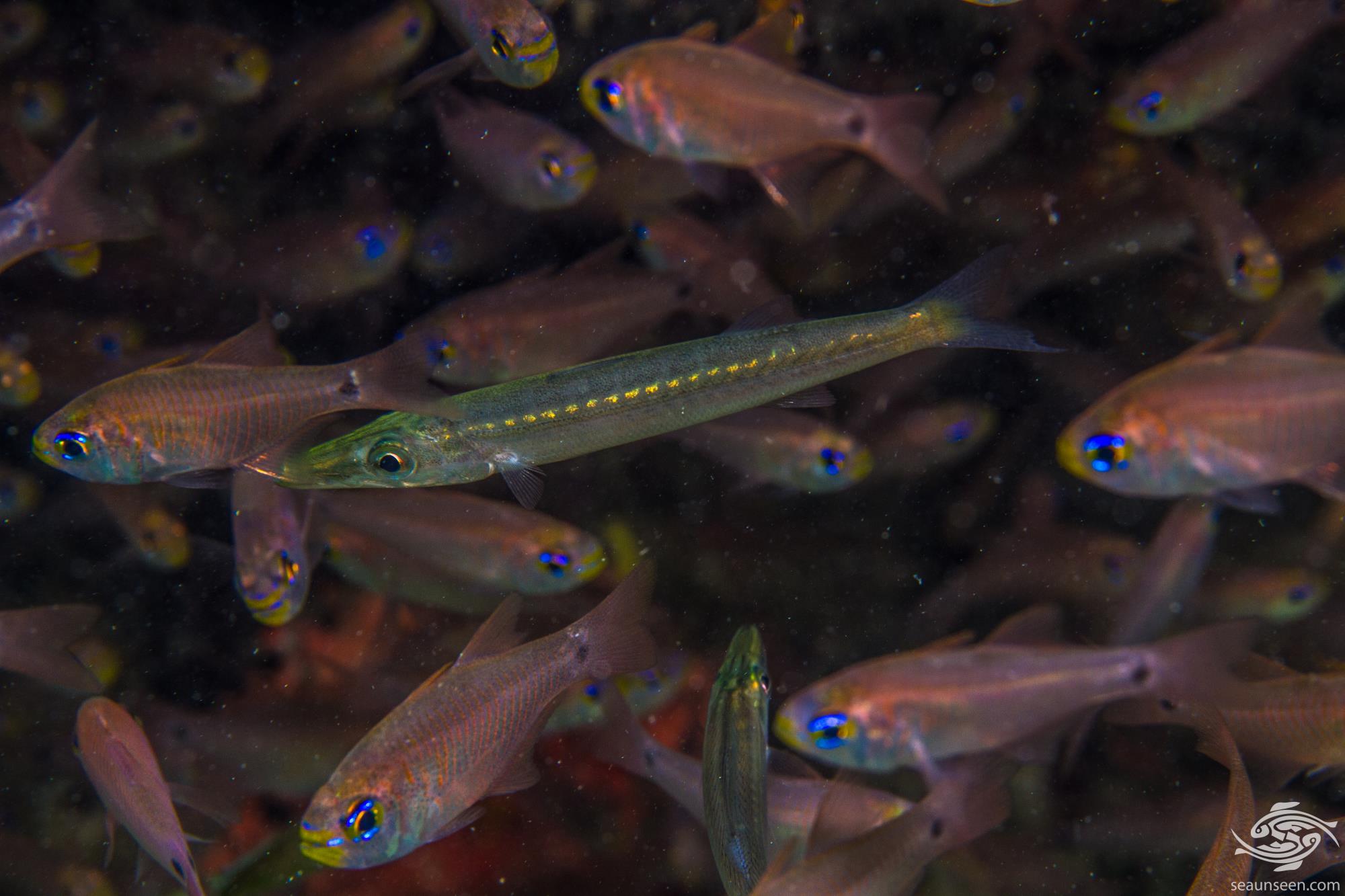 Pickhandle barracuda are a widely distributed species, found throughout the tropical waters of the Indo-west Pacific area. They are usually found during the day on exposed coral reefs shoaling above the reef surface and they separate at night to hunt. They are found from 2 meters to 200 meters in depth. 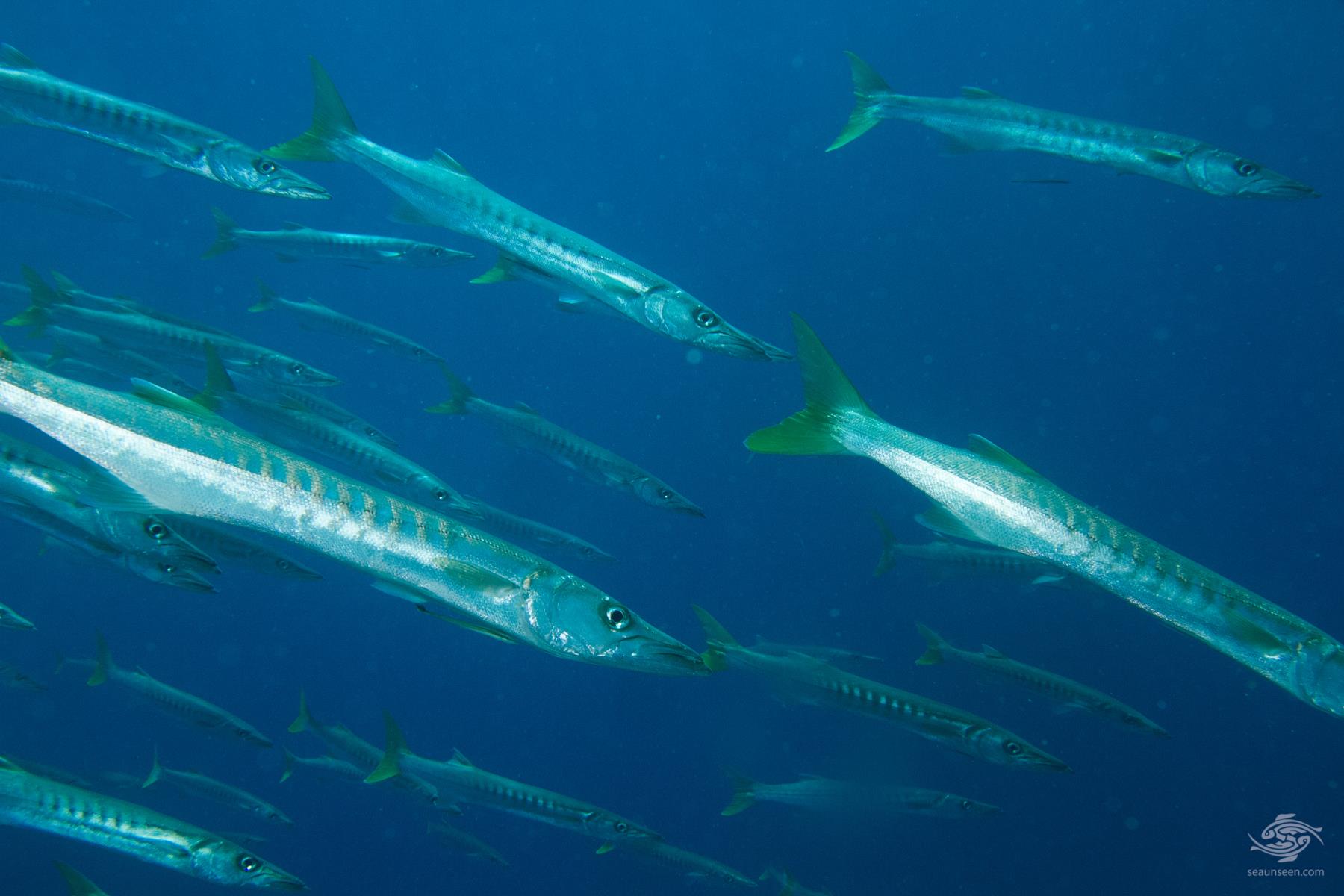 Pickhandle barracuda are ferocious predators and will attack any sizeable fish that they come across. Often they sit and wait in hiding on the reef for prey to come into range. They use their acceleration and speed to smash into the prey biting chunks out of it. Sometimes they bite a fish in half with the initial bite. Snapper, small grouper, squid and indeed anything they think may be edible is likely to be attacked.

The males mature sexually at three years and the females at four years. Not a lot is known of their mating habits but the spawning takes place in the water table and the eggs float freely until hatching. 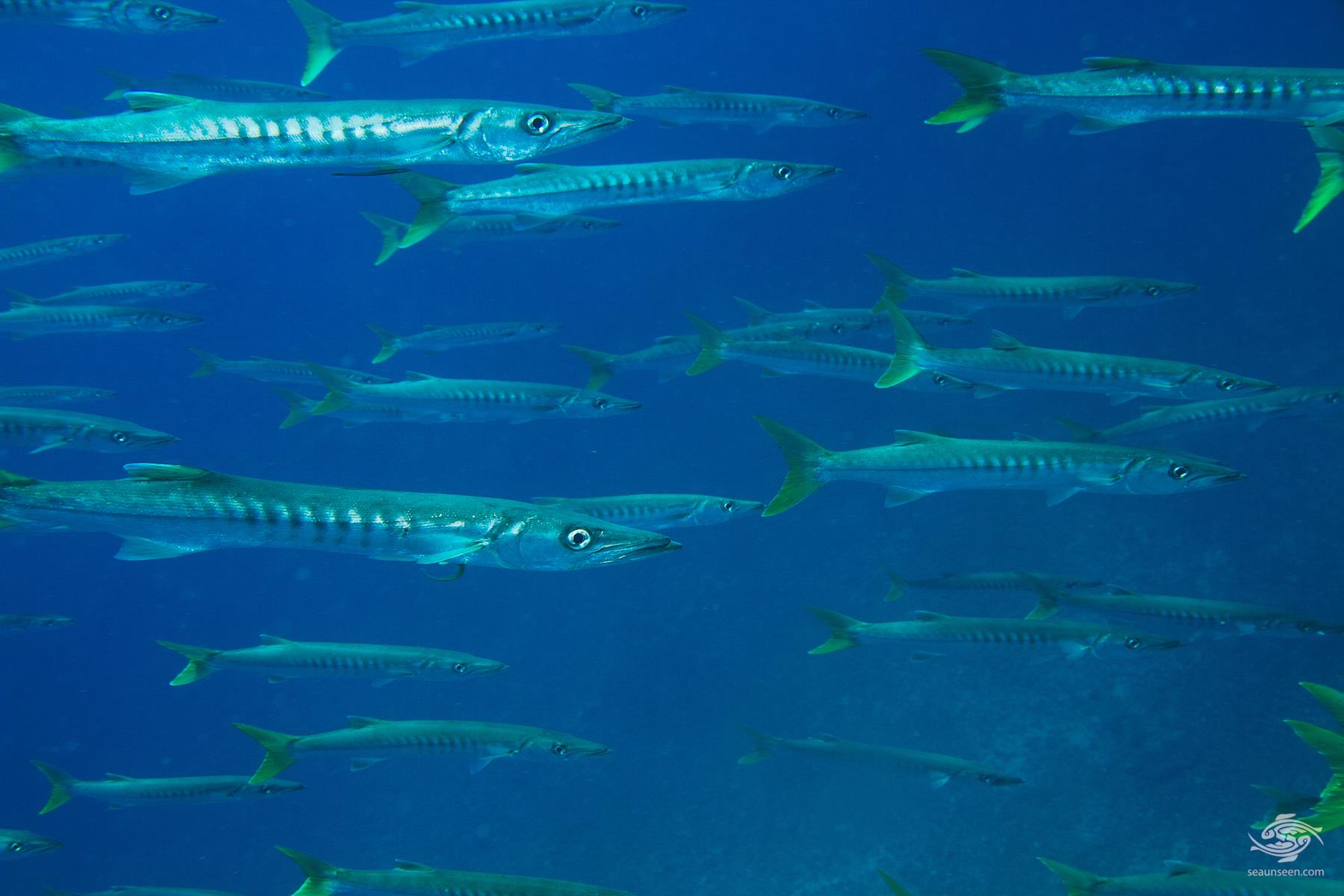 Pickhandle barracuda are classified as game fish and the larger specimens are fun to catch on a rod and put up quite a fight. Their flesh is not as tasty as snappers, groupers or bream and can be quite bony. Some people mince the flesh because of the bones. They will take lures but can be quite fussy on color. Whatever they are presently feeding on in the area is the preferred color. Being opportunistic feeders they will take a lure during the day. 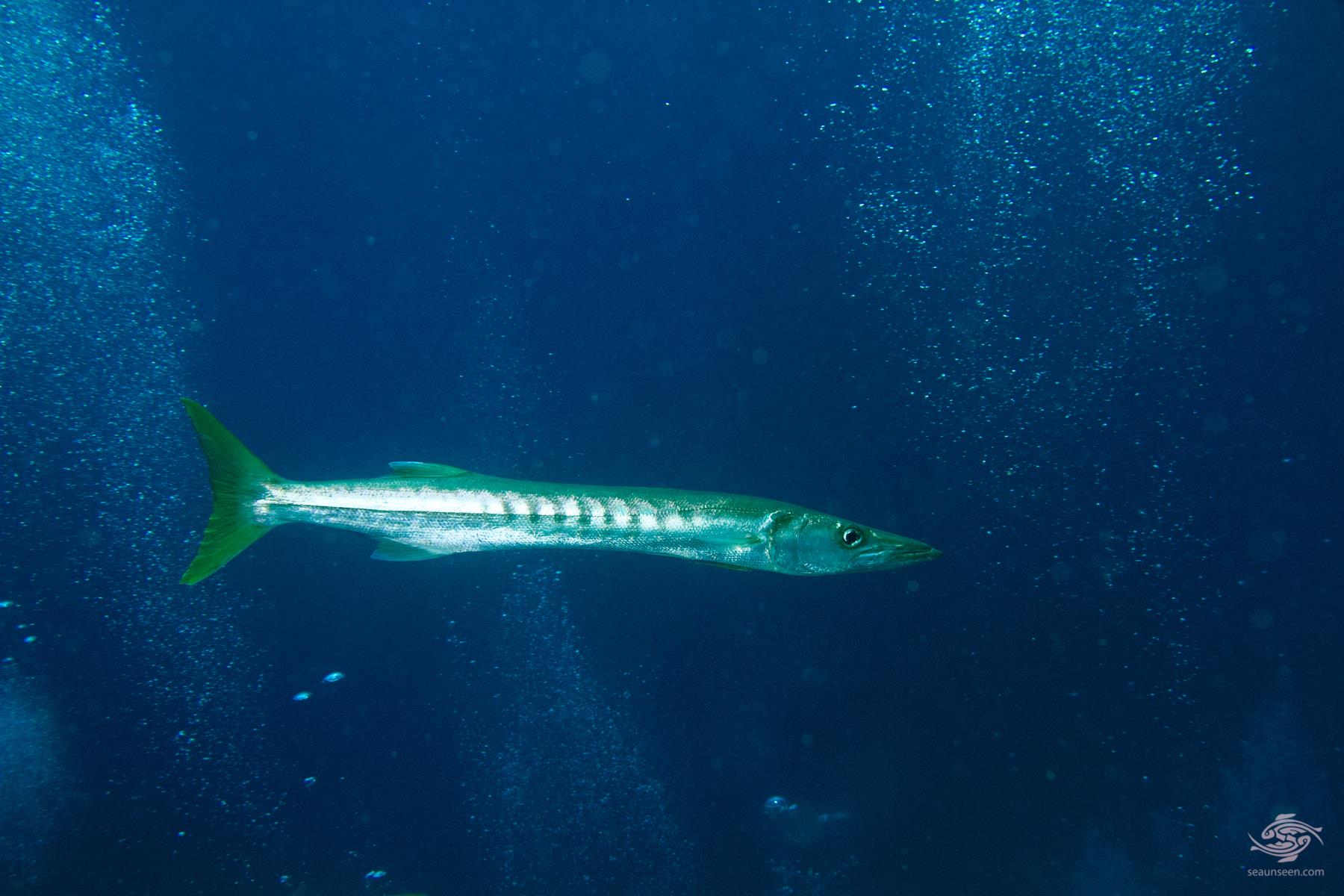